Reaktor
News
Список прямых трансляций МХЛ на телеканалах КХЛ
Vsevolod Almetkin returning to top shape after this summer’s crash
Konstantin Panov: “I dream about victories and developing my players.”
Raimonds Vilkoits: “We want to make the playoffs, but we’re going step by step”
Safin-Tregubov’s story: from Portugal to Russian snow, and from football to hip checks
Roman Kantserov: "I never even thought about leaving Magnitogorsk"
Gleb Petrov: "I want to win everything I can" - the top league's sniper talks childhood, North America, and current season
“We win because we play as a team and have known each other for a long time”. Loko-76 defenseman shared the secret of his team’s success
Alexander Perevalov is a true professional. He is very strict about the sharpness of his skates and enjoys himself at practices 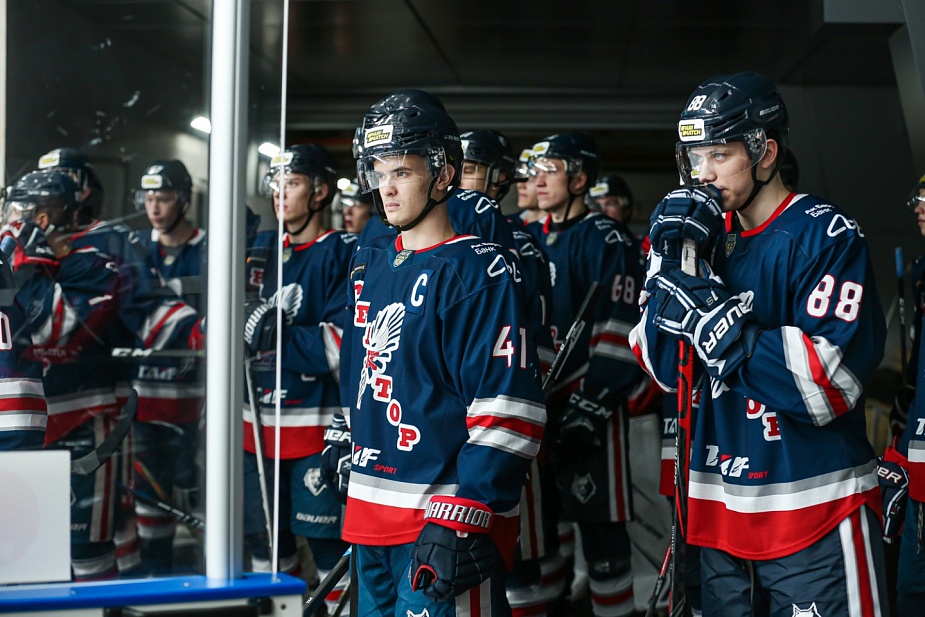 Main
Interview
“I had no trouble because of my name”. Daniel Butsayev opens up about working with his father, childhood in USA, Reaktor and his KHL debut
Share

Vyacheslav Butsayev is the head-coach of Neftekhimik Nizhnekamsk and his son plays under his command.

Notably, Butsayev Jr. made his KHL debut on his father’s team. However, unlike Sergei Mozyakin, who was able to hit the ice with his son Andrei, Vyacheslav Butsayev has long switched to coaching. He has been Neftekhimik head-coach since 2018. His son Daniel spent last season on Reaktor Nizhnekamsk – Neftekhimik major junior team in Junior Hockey League.

Now 20-year-old Daniel Butsayev is regular on Neftekhimik roster. In the 2020-21 season he scored 4 goals and notched 7 assists for 11 points in 44 games.

Daniel Butsayev’s story began in USA. Vyacheslav Butsayev spent almost the entire 90’s in North America playing for several teams in the National Hockey League (NHL), American Hockey League (AHL) and International Hockey Leagu (IHL). While the first two leagues are well-known, the IHL is terra incognita to many hockey fans. The reason is simple – it folded 20 years ago.

In the heat of the regular season, on February 9th, 2001, Vyacheslav’s son was born in the state of Michigan. He was named Daniel. The IHL folded and Butsayev went back to Russia, while his son and mother stayed in USA for three more years. The boy went to kindergarten there, learned to speak both Russian and English and sometimes visited his father in Russia.

“The flights were difficult for my family,” looks back it his childhood Daniel Butsayev. “Because I was a pretty energetic boy and I couldn’t stay in one place for a long time. On the flights, which were mostly in America, I wouldn’t sleep for the entire time and would constantly talk to someone. As soon as we would start getting ready for landing, I would fall asleep and it was difficult to wake me up.” 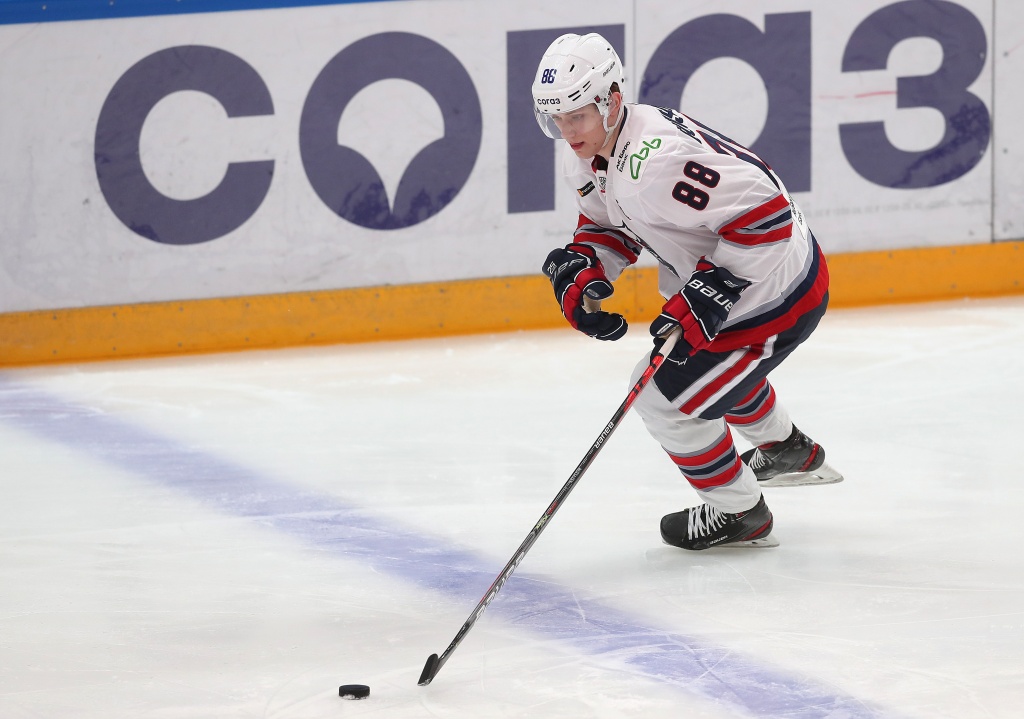 Daniel didn’t spend a lot of time in USA but he went to Russia with a good command of the English language.

“I didn’t have any trouble because of my name. Nobody looked at me as if I was from another planet. Everything was good. My friends just called me Danny. Did anybody call me Danila? No. No one ever said my name in a Russian way,” recalls his early time in Russia Butsayev.

After returning to Russia Vyacheslav Butsayev played professional hockey for six more years. First he signed with Lokomotiv Yaroslavl and then he moved to Severstal Cherepovets, CSKA Moscow, HC MVD Balashikha and HC Dmitrov Moscow Region. Daniel followed his father’s steps when he was five years old as he enrolled to CSKA junior hockey school. Although, according to the young forward, he had a stick in his hands ever since he was a little kid.

“I grew up in a family that revolved around hockey,” explains Daniel. “I would go to watch my father’s games and I would walk around the house with a stick in my hands. We had a small net at our place. My father we stand in front of them and I would take shots. Growing up in this hockey atmosphere formed a desire in me to play hockey. Actually, at first I wanted to be a goaltender. They had special equipment, which was different from skaters’. I remember when my father would take me to the locker-room, I would always go to make my acquaintance with goaltenders. I would ask them for the gloves and masks because I wanted to play in goal. You can sort of say that my best friends were Yegor Podomatsky, Alexander Fomichyov and every other goalie. As time passed, I cooled on the whole idea.

“When I would go to my father’s games with my mom, I didn’t know all of hockey details and nuances,” continues Daniel. “I was just five years old when my father retired. But I re-watched his games when I got older, even though I managed to find just a few of them. From what I have seen, I liked his persistence and how he crashed the net. He also saw the ice well and could make crisp passes.”

KHL debut was special for Daniel Butsayev. The father watched his son as a coach from the bench. Vyacheslav Gennadievich is a demanding coach and it applies to every player. Daniel hasn’t avoided getting criticized either but his teammates support him when times get rough.

“The coach speaks to the whole team and we have to heed to his words to get the result we want. I don’t feel any negative from the teams towards me. Many support me when the coaches have something against my actions,” tells Daniel. “My father is just as demanding of me as he is of other players on our team. Criticism is something I have to deal with sometimes. After the games we have a family meeting where we don’t discuss sports. On days off we can talk about hockey a little bit. We can discuss how certain players did and where certain teams are positioned. We don’t dig too deep into it but we do talk about hockey.”

Daniel Butsayev made his way to KHL through Junior Hockey League. He played 107 games in JHL, scoring 20 goals and 37 points. The forward spent the 2018-19 season with JHC Dynamo Moscow before joining Reaktor Nizhnekamsk. Butsayev blossomed on his new team. While he scored just one goal and three assists for four points in 43 games with Dynamo, Daniel registered 19 goals, 11 assists and 30 points in 60 games for Reaktor in the 2019-20 season. In the 2020-21 season the young forward got a chance to play in the KHL and he seized it.

“Whenever I’m given a chance, I do my best to make the most out of it,” says Daniel. “I was very happy and it felt good that I could score my first goal in KHL. It felt even better when we got a win in that league. It’s too early to say that I fully adapted to KHL. I do my best to get better every day and feel more confident on the ice. Junior Hockey League experience was very helpful. I’m thankful to the team management and especially to coaches Vyacheslav Alexandrovich Kasatkin and Igor Viktorovich Fyodorov and also my teammates.

“In KHL you face older and more experience opponents on the ice. In order to be successful against them, you have to heed to coaches’ words and focus on the game to the max. Even the locker-rooms are different in terms of atmosphere. Everyone is about the same age in Junior Hockey League and listens to about the same music. It’s mostly Russian and American rap. In Neftekhimik locker-room the music is always different. It’s mostly something like Ruki Vverkh. Sometimes they put something more modern and hip but it rarely happens. As for pranks and jokes, I didn’t see much of a difference. It mostly depends on people’s personalities. Guys with a good sense of humor can be found everywhere.”

Vyacheslav Butsayev won a silver medal at the 1990 World Juniors donning a Soviet Union jersey. He went on to play a total of 60 games for Team USSR, Unified Team and Team Russia. Daniel’s international career is yet to begin. Despite playing consistently in KHL, Butsayev didn’t make Team Russia for the 2021 World Juniors.

“Every player dreams to represent his country,” believes Daniel. “It’s a goal everyone works towards and I’m no exception. I’m not going to say that it’s indifferent to me whether or not I make the World Juniors team. Obviously, I wanted to be among the participants of the tournament. Now I have to work better at improving myself and get better in all game aspects so I could take my game to another level. Sports is all about daily competition. Besides, I have someone to look up to.”

Daniel Butsayev grew up in a sports family. His aunt Viktoria Yevgeniyevna Volchkova won four bronze medals at European championships, while his father and uncle Yuri Butsayev were professional hockey players. That’s why the young forward always has someone to give him advice.

“I talk to all of my relatives,” says Daniel. “We meet quite often, spend time together and ask how everyone’s doing. They always give me advice because they have achieved a lot in sports. So I have to listen to their advice.”

However, Daniel’s interests lie outside of hockey as well

“Aside from hockey I like golf,” shares Butsayev. “My father and I also play tennis quite often as well as basketball. If I have time to spare I can watch NBA highlights. I’m not a fan of any particular team but I enjoy watching certain players – Lebron James, Stephen Curry… In my opinion, Michael Jordan was the most outstanding player. In my spare time I enjoy listening to music and watching movies. Whenever I have the time I enjoy going to expositions. It’s great to do that with my school friends, whom I have known for 13 years. The latest exposition we went to was Garry Benson’s – he used to be the photographer for The Beatles. Lately, I have gotten into psychology books. The latest book I have read was The Subtle Art Of Not Giving A F*ck by Mark Manson. It’s a very unusual and exciting book.

“As for the movies, I enjoy the ones about life – the ones you feel like thinking about after it’s over and not the ones you forget as soon as the credits roll out. Christopher Nolan is a director I can single out. He’s unbelievably talented.”

There aren’t many friends who spend their spare time this way but there are some.

Daniel Butsayev’s approach to hockey is just as serious as to his Instagram profile. The player is scrupulous at choosing photos and follows a certain style. You can follow him at this link.

“I enjoy beautiful photos,” shares Neftekhimik forward. “There are certain photographs that look really good in black and white and have a certain meaning behind them. I post on Instagram only those photos that I like myself. I have a photo with a skateboard but the only trick I can do is the Ollie. I just enjoy skateboarding while listening to music.”