“SOMETIMES THEY CONFUSE OUR FIRST AND LAST NAMES”. TOP PLAYERS’ OF THE WEEK COMMENTS Snezhnye Barsy
News
“I am of the same “slow ship” style as my father.” Maxim Mayorov – about moving to Yaroslavl, national team debut and passion for tennis
“I bought a cake and gave flowers to my mom with my first paycheck.” Yaroslav Tsulygin – about his JHL debut with Tolpar
Was signed up for hockey at the age of three, was dressed as a goalie in an extreme situation and looks up to Datsyuk: take a closer look at the leader of Irbis and the hope of Ak Bars
Edgar Varagyan: “When we were on the plane, guys told me: “He is an enforcer, he would beat you up with no sweat.” I thought: things happen, he would beat me up and so what?”
“As time goes by, taking a flight to Sakhalin feels almost like being stuck in Moscow traffic.” Daniil Veremeichik – the JHL's Best Player on Social Media
“Working out in a gym is a type of rest for me.” Ivan Murashov had the best season of his career, dreams of playing in the KHL and has not eaten any fast food for two years
“Condensed milk is the only unhealthy food available for the national team.” Raul Yakupov – about the Black Sea Cup, the KHL debut and the season with Reaktor
“Four years in the JHL was a great time. Winning the Cup with Dynamo was the best moment.” Ivan Didkovsky about junior phase of his career
Share

“SOMETIMES THEY CONFUSE OUR FIRST AND LAST NAMES”. TOP PLAYERS’ OF THE WEEK COMMENTS

There weren’t that many games last week in the Western Conference and Eastern Conference players took full advantage of that as they were selected for every position on this top players of the week chart. Samat and Sayan Daniyar of Snezhnye Barsy Astana scored two goals each in one games despite the difference in their positions and ended up together on this list. The players spoke about how special Kazakhstan rivalry is and their scoring race, while Sibirskie Snaipery goaltender pointed out a nice save by his teammate. 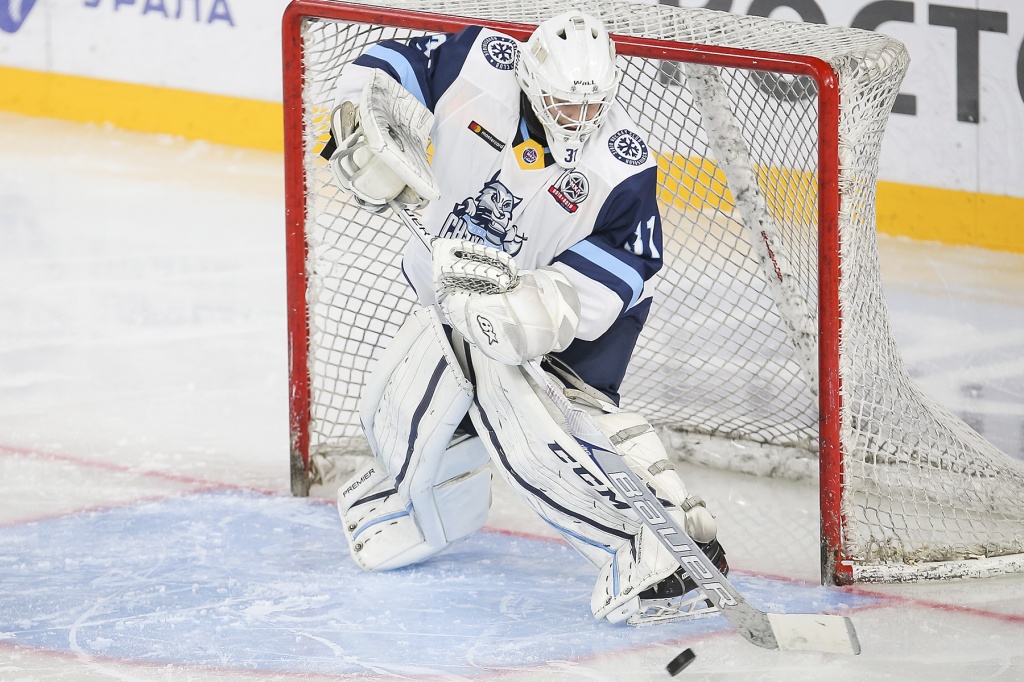 “Sibirskie Snaipery are currently 7th in the Eastern Conference so everyone on our team is hoping to improve the situation,” said Sibirskie Snaipery goaltender Vladislav Scherbakov. “We played several games on home ice last week and our fans were a huge factor. Our games draw a lot of fans. Last week we were able to beat some tough opponents, who are on top of the conference – Tolpar [Ufa] and Avto [Yekaterinburg]. Such wins boost your confidence.

“My teammate Bogdan Nefyodov also had an achievement last week – his save ended up among the top of the week. I was very happy for him. Usually coaching staff make the decision on who’s going to start at the morning practice on gameday but since Bogdan was called up to U18 Team Russia, I got the nod. When I was called up to play for Team Russia, Bogdan took my place. We try to follow Team Russia games. For example, these days we watch Canada-Russia junior series before practices.” 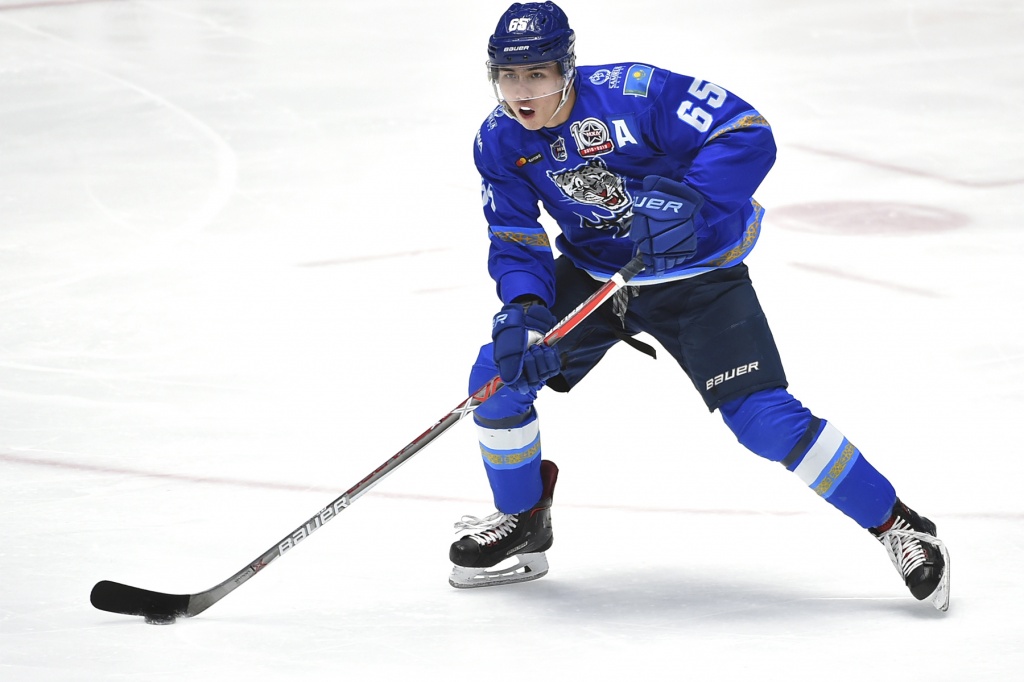 “As many as two Snezhnye Barsy players ended up among the top of the week and it’s all because one great game against Altay [Ust-Kamenogorsk], in which Sayan and I scored a pair each and also picked up an assist each on each other’s markers. Of course, our teammates played a huge role in that like Artur Gatiyatov, for instance,” said Snezhnye Barsy Astana defenseman Samat Daniyar.

“It’s great to play with my brother. Although, we’re not really brothers as we are cousins. We play together pretty often. Sometimes people confuse our first and last names but by now most of the guys already know us well. It’s not like we’re twins so it’s not a problem for our teammates to tell us apart.”

“We don’t have a competition between us per say because we play different positions. We always talk about what we’re going to do on the ice. I usually join offensive rushes while he backchecks. Perhaps, it’s because of this that we had the same number of points last week. However, as a defenseman, my first responsibility is to protect my own net.” 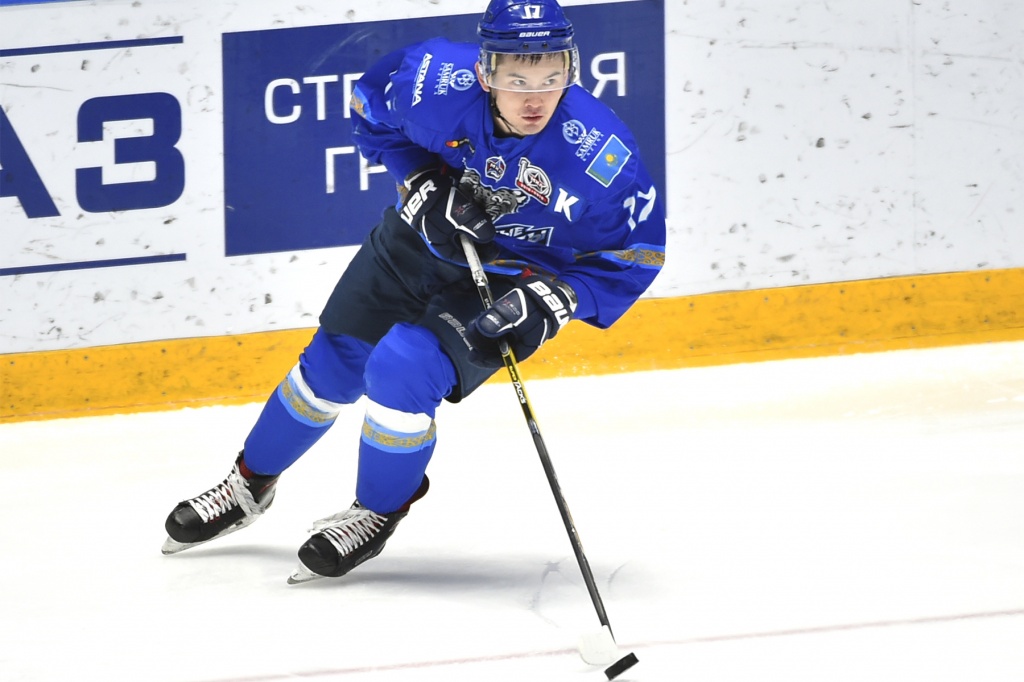 “Last week Snezhnye Barsy had rivalry games against Altay – it’s the Kazakhstan Rivalry. So we came out pretty hard for those,” shared Snezhnye Barsy forward Sayan Daniyar. “Our teammates helped me and my cousin to get a pair of goals each – it was nice to look at the scoreboard with our names on it. Samat is great when it comes to joining rushes and that’s why he scored just as many as I did. I’m happy to see him do so well. There’s no competition between us. On the contrary, we help each other out and give each other advice.

“I’m only second in Junior Hockey League scoring so far. It’s nice to be able to compete for the top spot, get points and be a leader. Although, I think foremost about my team and our success rather than my personal achievements. I play for my team.”