NIKITA KOVALEV: “I DREAM TO PLAY UNDER MY FATHER’S COMMAND ONE DAY” 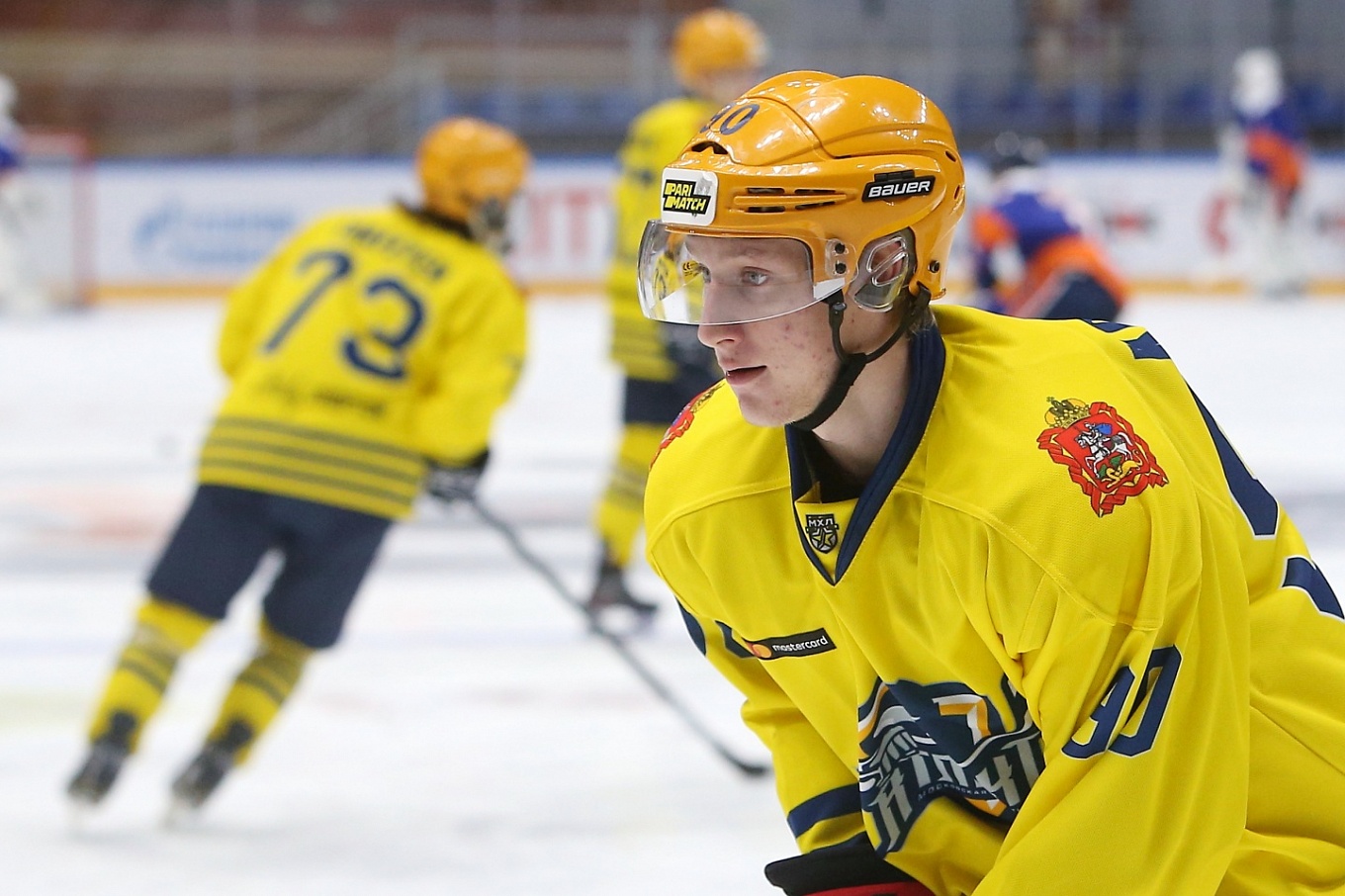 Interview
NIKITA KOVALEV: “I DREAM TO PLAY UNDER MY FATHER’S COMMAND ONE DAY”
Share

“ONLY IN RUSSIA DID I REALIZE HOW FAMOUS MY FATHER IS”

Kovalev Jr.’s move to Russia happened due to coronavirus pandemic. After graduating an American high school the player was looking for an option to continue his career in junior hockey but many North American leagues postponed the start of the season.

“I had to go to another level after playing high school hockey. And the time was ticking, while the situation with the start of the season in North American leagues wasn’t getting any clearer,” explains his decision Nikita. “That’s when my father offered me to move to Russia and try myself out in Junior Hockey League. He said that level of hockey here was good but I would have to get used to the style of play.

“Playing in JHL is a challenge for me. I knew right away that I was going to be difficult to play in the league and I would have put a lot of effort to get a regular spot on the roster. The workload is heavy here, the schedule is pretty tight and the level of hockey is high. I think, JHL is the best I could have made in the situation.”

Symbolically, Kovalev Jr. begins his professional career in Russia as a member of Atlant as his father spent the only KHL season as a player with Mytischi.

“I believe it was when my father played for Atlant that I realized how truly famous he was,” looks back Nikita. “It seemed that everyone was talking about his return to Russia and I was always asked about my father. Obviously, sometimes my friends in America would ask for his autograph but before he signed with Atlant I didn’t realize how popular he was. That’s when I began watching his old games and highlights and understood that he was a great player!

“Now that I put on Atlant jersey myself I look back on that season. The new arena, sold-out crowds… A lot has changed since then. The club exist as a junior team but due to the pandemic they don’t let a lot of fans in the stands.”

It was when Kovalev Sr. moved back to Russia for the 2011-12 season that Nikita got his first hockey experience in the country as he practiced at CSKA Moscow junior hockey school. Several players from that team currently represent Krasnaya Armiya Moscow – Yegor Kurilkin and Daniil Kuzmin, for instance. This season Kovalev Jr. will have to meet them as their opponent.

“Definitive talk about moving to Russia began very late, sometime around late July,” says Nikita. “Most of JHL teams’ rosters were set by that time. The option with Atlant suited me for several reasons. First of all, the team is based close to Moscow and, secondly, Kunlun Red Star, where my father is the head-coach, play their home games in Mytischi this season.

“My father helps me a lot in everyday life. I lived in Russia only for a year and it was a long time ago so moving here wasn’t easy for me. In the first couple of months I had to work hard on remembering the language and it was difficult to talk with people around at first. While I can converse with my teammates freely already, I still struggle with translating documents and I really need my father’s help. Besides, he shares his experience with me, because he was in my situation when he moved from Russia to NHL. Although, it was tougher for my father because he didn’t speak the language at all.”

- What haven’t you been able to get used in Russia after all these months?

“I still can’t get used to the fact that Amazon is not popular in Russia. I used to be able to order the stuff I wanted and it would get delivered after a few days and now I can’t do that,” says Nikita with a laugh. “Actually, I hadn’t any idea how people live in Russia – what and where they eat, where they go for fun, what they do on their days off. But I get used to it little by little. My teammates showed me a few exciting places. I went for a walk to Moscow a few times on my days off.”

Kovalev Jr. joined Atlant back in the summer but despite that he made his Junior Hockey League debut only in October. He had to spend a few months getting his transfer paperwork in order as well as get Russian passport as he had had just his citizen papers before.

“I realized that at first I would have to practice more than play,” confirms Nikita. “It’s even for the best because I had the time to practice with the team and gradually work my way into the lineup because right now I have to learn a new style of play for myself and understand Atlant brand of hockey.

“Hockey is a little different in Russia. While in America the focus is on the individual skill, over here every team concentrates on playing the passing game and tactics is really important here. Everyone on the ice should move in order and keep passing the puck. I’m still not used to play like that so I have to improve at a lot of game aspects.”

On October 5th Kovalev Jr. made his Junior Hockey League debut. In the game against SKA-Varyagi he played 3 minutes and 30 seconds.

“Before I made my debut my teammates supported me because I was nervous,” reminiscences Nikita. “I expected a fast-paced game. I played just a few shifts in my debut game but I’m still just getting used to playing positional hockey. Right now I need to stop scuttle around the ice and play calmly. I think in a few months I will get fully used to coaching staff demands and the pace of the game in the league.”

“We spoke and discussed the game after he made his debut,” comments on his son’s first JHL game Alexei Kovalev. “It’s an absolutely unknown league for Nikita. The style of play is different here. Hopefully, after some time he’s going to be able to prove himself at the level. We talk about the nuances of the game with him so I would understand how he feel and how he sees game situations. Sometimes I give him advice and explain the nuances to him.”

“MY FATHER AND I PLAY IN A SIMILAR STYLE”

“Obviously, I feel pressure because of my last name,” agrees Nikita. “Many expect that I’m going to play like my father right away. That I would hit the ice and beat everyone just on one skate. Of course, that’s not the case. I still have a lot of work ahead of me if I want to get to my father’s level.”

“On one hand, my son knows that he’s going to be compared to me, so there is going to be responsibility and pressure,” believes Alexei Kovalev. “But we discussed the topic many times. I explained to him that he has a life of his own, his own style and his own outlook.

“On the other hand, it’s always important to children to prove that they’re not worse than their parents. Nikita always works hard on improving himself and learns the best he can. We tape his practices and later analyze his shots, skating and other aspects together.”

Among other things Kovalev Jr. chose #90 on his JHL jersey to avoid being compared to his famous father.

“I used to play under #27 sometimes,” admits Nikita. “But everyone associates the number with my father and I wanted to have something of my own. So after some time I decided to switch from 27 to 17. I always liked Ilya Kovalchuk, besides the number looks great on the jersey. But on Atlant the number is taken by Nikita Miller so I had to choose something else. I asked for #97 in tribute to Connor McDavid but they couldn’t make it in time so I had to get #90.”

Nevertheless, Kovalev Sr. just as Kovalev Jr. admit that they have some similarities in their game style.

“There’s a lot of me in Nikita’s game,” says Alexei Kovalev. “He’s physically strong, he can hold on to the puck and take a good shot. He has good qualities on which we worked together. He still lacks confidence but it comes with experience.”

“I think we’re similar in terms of smooth skating and the same game style. But my father has way better hands,” adds Nikita.

The similarity isn’t surprising since Kovalev Sr. played a huge role in his son’s love for hockey.

“I put the skate on for the first time in Montreal. I remember how my father taught me to skate on a frozen pond,” shares Nikita. “He never forced me into hockey. My brother and I were in different sports but I always liked hockey best. I often went to my father’s games and later met him in the dressing-room and met his teammates. Obviously, I was just a little kid back then and didn’t realize how great it was!”.

Despite his tight schedule Alexei Kovalev helps his son even these days.

“My father doesn’t have a lot of time because he’s very busy at Kunlun Red Star and there’s a lot of stuff related to the team he has to do. But he still finds time to help me. He shows me highlights and discusses games with me,” says Nikita.

“During quarantine we watched a lot of Atlant games, discussed tactics and players’ actions. There’s a lot of new in Junior Hockey League for Nikita tactics-wise so it’s important that he would understand everything and get used to the style of play,” adds Alexei Kovalev.

“I have a dream to play for my father’s team one day. This season Kunlun have some roster troubles so sometimes he jokes that he would have to dress me for a game. Obviously, it’s just a joke because I’m not ready for KHL at all,” laughs Nikita Kovalev.