“I PLAY AT THE RINK I USED TO COME TO AS A KID”. QUOTES BY TOP PLAYERS OF THE WEEK HC Riga
News
“I am of the same “slow ship” style as my father.” Maxim Mayorov – about moving to Yaroslavl, national team debut and passion for tennis
“I bought a cake and gave flowers to my mom with my first paycheck.” Yaroslav Tsulygin – about his JHL debut with Tolpar
Was signed up for hockey at the age of three, was dressed as a goalie in an extreme situation and looks up to Datsyuk: take a closer look at the leader of Irbis and the hope of Ak Bars
Edgar Varagyan: “When we were on the plane, guys told me: “He is an enforcer, he would beat you up with no sweat.” I thought: things happen, he would beat me up and so what?”
“As time goes by, taking a flight to Sakhalin feels almost like being stuck in Moscow traffic.” Daniil Veremeichik – the JHL's Best Player on Social Media
“Working out in a gym is a type of rest for me.” Ivan Murashov had the best season of his career, dreams of playing in the KHL and has not eaten any fast food for two years
“Condensed milk is the only unhealthy food available for the national team.” Raul Yakupov – about the Black Sea Cup, the KHL debut and the season with Reaktor
“Four years in the JHL was a great time. Winning the Cup with Dynamo was the best moment.” Ivan Didkovsky about junior phase of his career
Share

“I PLAY AT THE RINK I USED TO COME TO AS A KID”. QUOTES BY TOP PLAYERS OF THE WEEK

Top players of the fifth week of Parimatch Junior Hockey League regular season spoke about their success. HK Riga players shared their thoughts on winning streak at home, while Almaz forward commented on his team coming back from quarantine. 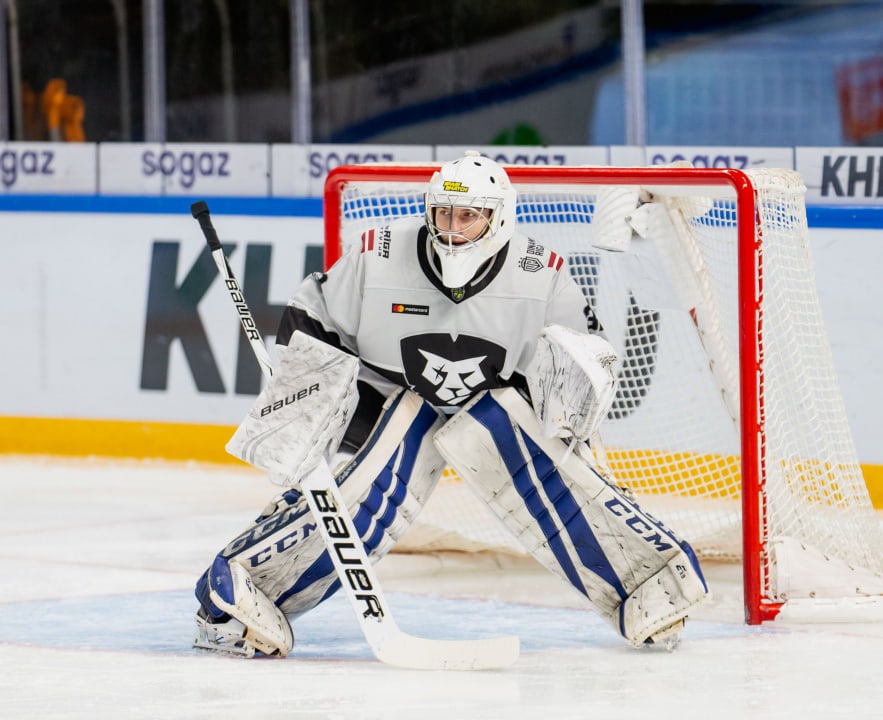 “Last week we played four games in four days so we didn’t have much energy left in the tank towards the end of the home stand,” said Vitols. “It was a very interesting but a very difficult experience. In the games against Sakhalinskie Akuly I got a lot of help from all of my teammates who blocked a lot of shots. I played all of those games. Despite a heavy physical workload, I’m very happy that I got so much game experience.”

- You beat Janis Voris’ feat of last season as you posted four shutout wins in less than two months of the regular season. Voris had three all season last year.
- My teammates helped me a lot. There was a lot of work to be done and it was tough to play. So I’m happy that I was able to post a few shutouts.

- HK Riga won five consecutive games.
- The factor of a long homestand came into play. We have a very active fan sector. The fans sing songs and beat the drums – you definitely feel the support as they create an incredible ambience. This season HK Riga plays at the main arena of the city, the one that hosts KHL games. It’s great to step on the ice. It almost feels like home. When I was a kid I used to come here to support my favorite team and now I get to play here myself!

- HK Riga is one of the top teams of the Western Conference now.
- We don’t pay attention to the standings. It’s great to know that we sit among the top teams but there’s still plenty of hockey to be played so it’s not the time to get distracted by counting points.

- This is your debut Junior Hockey League season.
- JHL is a very strong league. All of the teams are more or less equal. I like it that every team can beat every team. You never know ahead of time who’s going to win. This is my first season at such level. I used to play in Latvia before but my coach wanted to see me play in another league. He told me that I had to play at a higher level and develop my talent. Following his advice, I tried out for Riga and made the team. 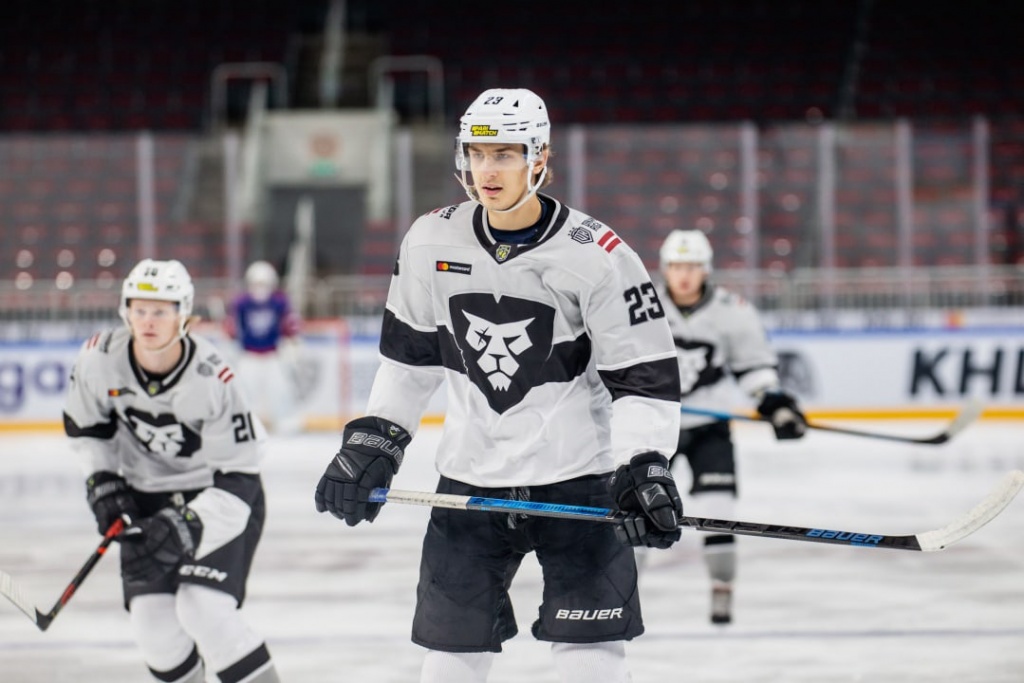 “Riga played at home for a very long time. It was a nice homestand. It’s great to play in front of your fans,” shares Tumanovs. “It’s especially great to play at the big arena. The atmosphere here is truly special!

“I was sent down to Junior Hockey League team earlier last week. I had played for Dinamo before that. KHL games showed me how different men’s game is from junior hockey and where I should improve. Even though the head-coach didn’t trust me with a lot of ice-time I still got a lot of experience. I had a scoring chance in the game against Vityaz but I was unlucky.

“I couldn’t adjust from KHL to JHL quick enough. I wasn’t at my best in my first game back. But after that I pulled myself together and played on another level.” 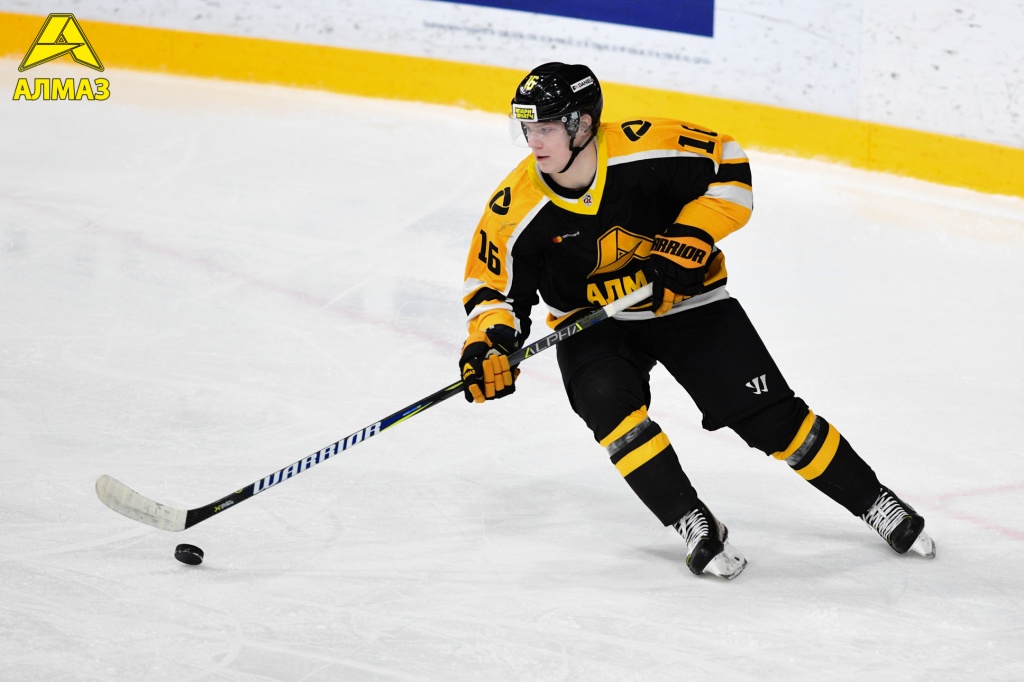 “Almaz finally came out from quarantine last week. We didn’t play since mid-September so the first couple of practices after missing two weeks were really difficult,” says Nevolin. “I couldn’t practice while being quarantined so at first it felt like I forgot how to skate. I regained my more or less optimal condition only around the third game. I felt confident, moved with the pace of the game and began scoring points again.”

- It was your second pause this season as you got injured earlier in August.
- It happened in the games against Molot-Prikamie Perm. I was sent over there for a few pre-season games. I had to recover for about a month from the injury. And just as I returned to ice and began getting back in game shape, we were put on quarantine. So the start of the season truly turned out to be bumpy.

However, these pauses shouldn’t affect my shape too much because I spent the pre-season camp with Severstal. The camp with Andrei Vladimirovich Razin was the hardest I have ever had! There were heavy vests and skating with weights. We did the best we possibly could. All of that hard work starts to pay off now.