Back to the list
News
Roman Kantserov: "I never even thought about leaving Magnitogorsk"
Gleb Petrov: "I want to win everything I can" - the top league's sniper talks childhood, North America, and current season
“We win because we play as a team and have known each other for a long time”. Loko-76 defenseman shared the secret of his team’s success
Alexander Perevalov is a true professional. He is very strict about the sharpness of his skates and enjoys himself at practices
First 4-goal performance, Green Rilvary hero and Magnitogorsk goals galore. JHL week round-up
Irbis won their first games of the season after losing eight straight – beating their arch-rivals in Green Rivalry
“Ideal team balance is what makes every coach happy!”. Rinat Khasanov shared secrets behind Krasnaya Armiya’s great start of the season
Amazing saves galore, Tula heroics and Krasnaya Armiya’s first loss. Junior Hockey League weekly review
CHAYKA AND RIGA BLANK OPPOSITION, KRASNAYA ARMIYA AND DYNAMO WIN IN ST. PETERSBURG. OCTOBER 9TH ROUND-UP
Share 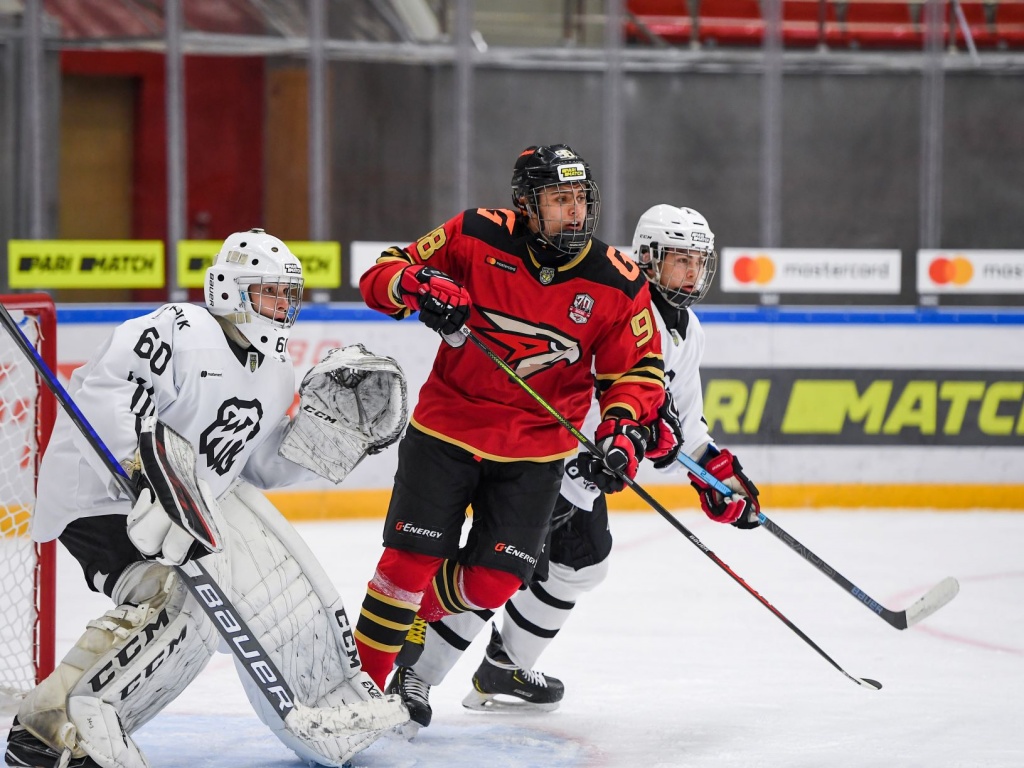 The teams were feeling each other out in the opening minutes of the game. Neither Omskie Yastreby, nor Belye Medvedi Chelyabinsk wanted to commit mistakes and give the opposition a chance to get in the lead. Home team made the first mistake of the game midway through the first period as they took a minor penalty. However, not only they managed to kill off the ensuing power play, they also scored a shorthanded goal. Timofey Davydov put the ‘Hawks’ in the lead. Nevertheless, Belye Medvedi brought it back to even at even strength – Artyom Udot found the back of the net.

The teams picked up the pace in the second period of play and the number of mistakes rose, although it didn’t lead to an increase of goals. Chelyabinsk failed to convert on one man-advantage, while Omskie Yastreby came up 0-for-2.

After the intermission the visitors gradually began turning the momentum around in their favor. They started creating more scoring chances, forcing Omskie Yastreby to focus on defense. Halfway through the frame ‘Polar Bears’ put together two high-quality chances and one of them turned out to be a goal – Konstantin Lukin put Chelyabinsk in the lead. The ‘Hawks’ tried to turn the tables before the period expired but their aggressiveness led to two minor penalties late in the period. As a result, the visitors dominated in the last minutes of the stanza but couldn’t extend their lead.

Home team had the momentum on their side in the third period. Omsk came out hard and shifted the play to their offensive end, looking for the equalizer. They managed to create a large number of scoring chances but Belye Medvedi defensemen along with goaltender Viktor Golovlev were able to hold them at bay. The closer was the final buzzer, the more aggressive were becoming Omskie Yastreby, letting the opposition opt for quick transition plays. One of the latter led to a security goal for Belye Medvedi – Konstantin Lukin scored his second of the game and shattered Omsk’s hopes of forcing overtime. Chelyabinsk win a hard-fought game in Omsk 3-1. 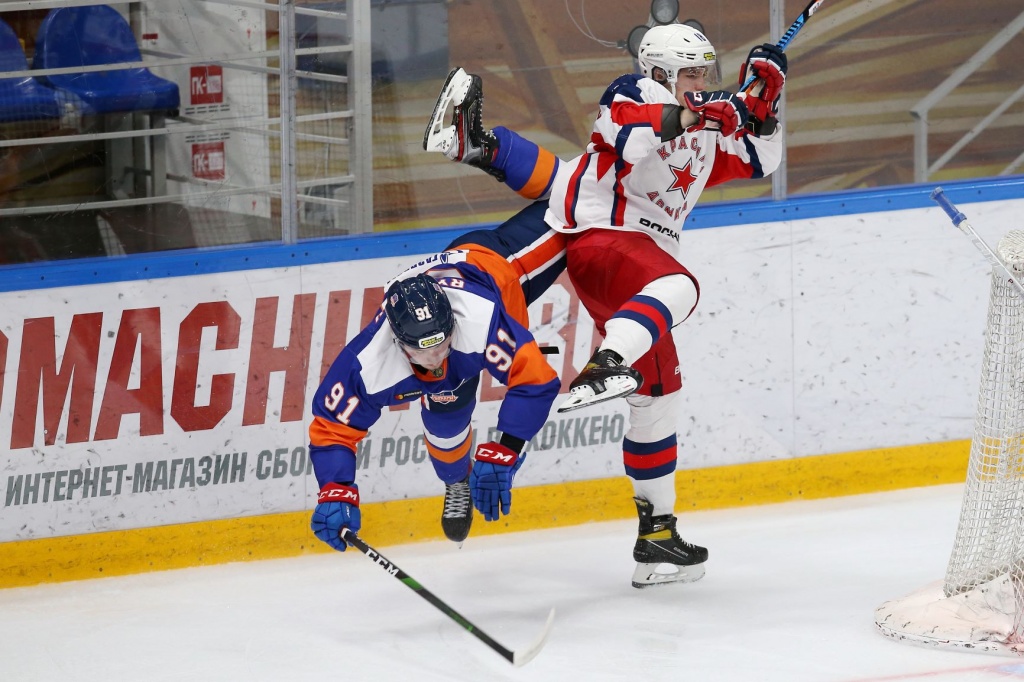 Krasnaya Armiya Moscow got in the lead in the opening minute of play as Daniil Anop found the back of the net. The goal let the visitors play with confidence in the early moments of the game, while SKA-Varyagi Leningrad Region had to put out fires on defense. However, gradually, ‘army men’ shifted the play away from their zone, which led to an equalizer seven minutes into the period. Evgeny Sapelnikov sniped it past Matvei Kiselyov from the left face-off circle to tie it up. The teams were evenly matched after that but SKA-Varyagi committed several mistakes, which led to two consecutive penalties. Home team survived the first penalty kill, but shortly after Daniil Kuzmin one-timed it past Sergei Ivanov to regain the lead for Krasnaya Armiya.

Early in the second period Moscow got another chance to improve their lead as they were awarded with a penalty shot. However, Prokhor Poltapov couldn’t beat Ivanov. Closer to the halfway mark of the period home team evened the game out and managed to tie it up again. Evgeny Sapelnikov scored his second of the afternoon as he converted on a 2-man advantage. The teams traded goals in the following minute – Yegor Gurzanov scored for SKA-Varyagi, while the visitors responded with Dmitry Zugan’s tally. The teams continued to exchange scoring chances right till the very end of the period when Krasnaya Armiya recaptured the lead with Artyom Pugachyov’s marker.

Krasnaya Armiya put together several offensive rushes early in the third stanza. The visitors put the play in SKA-Varyagi’s zone right away, not letting the opposition skate past the red line to level the score again. Home team defense had to survive several tough minutes, while Ivanov made a flurry of grand saves. Only late in regulation did SKA-Varyagi manage to come up with a few good scoring chances and convert on one of them. With three minutes remaining on the clock to play in regulation Kirill Tankov made it a 4-4 hockey game, forcing overtime. Extra period of play solved nothing so the game went to the shootout and Krasnaya Armiya prevailed with three converted attempts against two. SKA-Varyagi lose 3-2 on home ice in the shootout. 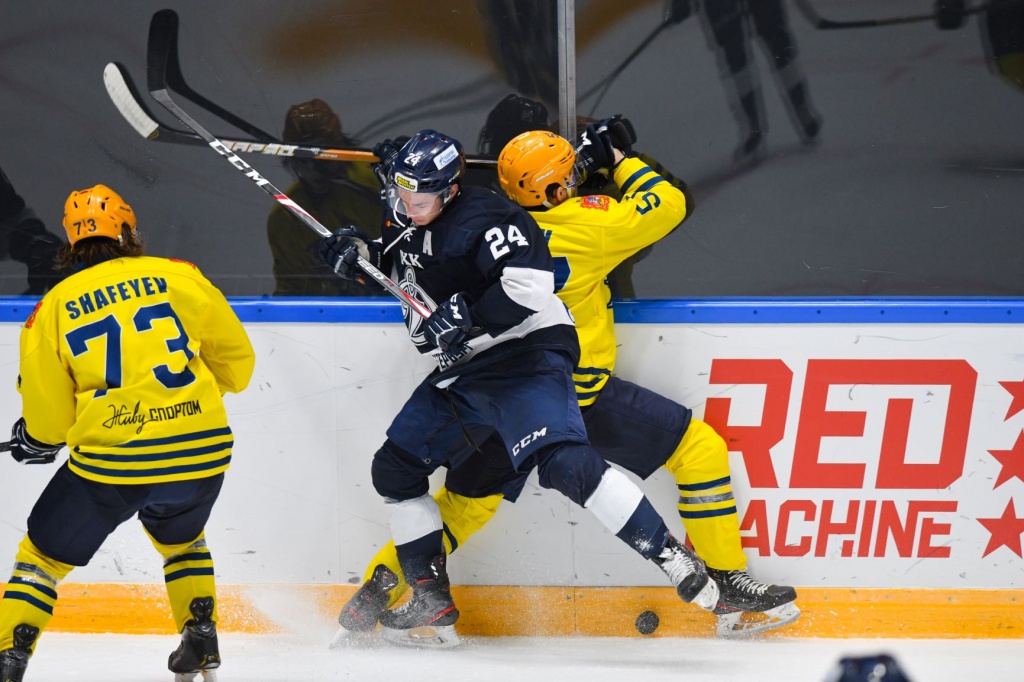 First period of play in St. Petersburg began with offensive rushes by the hosts but Atlant Moscow Region players were able to cope with them. Midway through the period JHC Dynamo St. Petersburg found themselves shorthanded and Mytischi converted in the last seconds of the power play. Nikita Miller wristed it top-shelf. Home team put all of their effort on offense, pinned Atlant to their net and with 90 seconds on the clock Gleb Shaborshin sent it upstairs to help his team leave for the intermission tied 1-1 on the scoreboard.

Home team continued to have the momentum on their side in the second period and force work on Matvei Botov. Moscow Region responded with counter-attacks but their defense had objectively more on their plate. St. Petersburg took twice as many shots as opposition over the period but couldn’t capitalize on their chances. Atlant and Dynamo were still even after 40 minutes of play.

The situation changed early in the third stanza. Rodion Tsizman one-timed it past Botov and Dynamo took the first lead of the game. Home team focused on protecting their net after that, staying hungry on pucks and not letting the visitors any opportunities to get the equalizer. Late in regulation Atlant did get a chance to bring it back to even but Dynamo survived a penalty kill and held on to the lead. St. Petersburg win 2-1 on home ice.