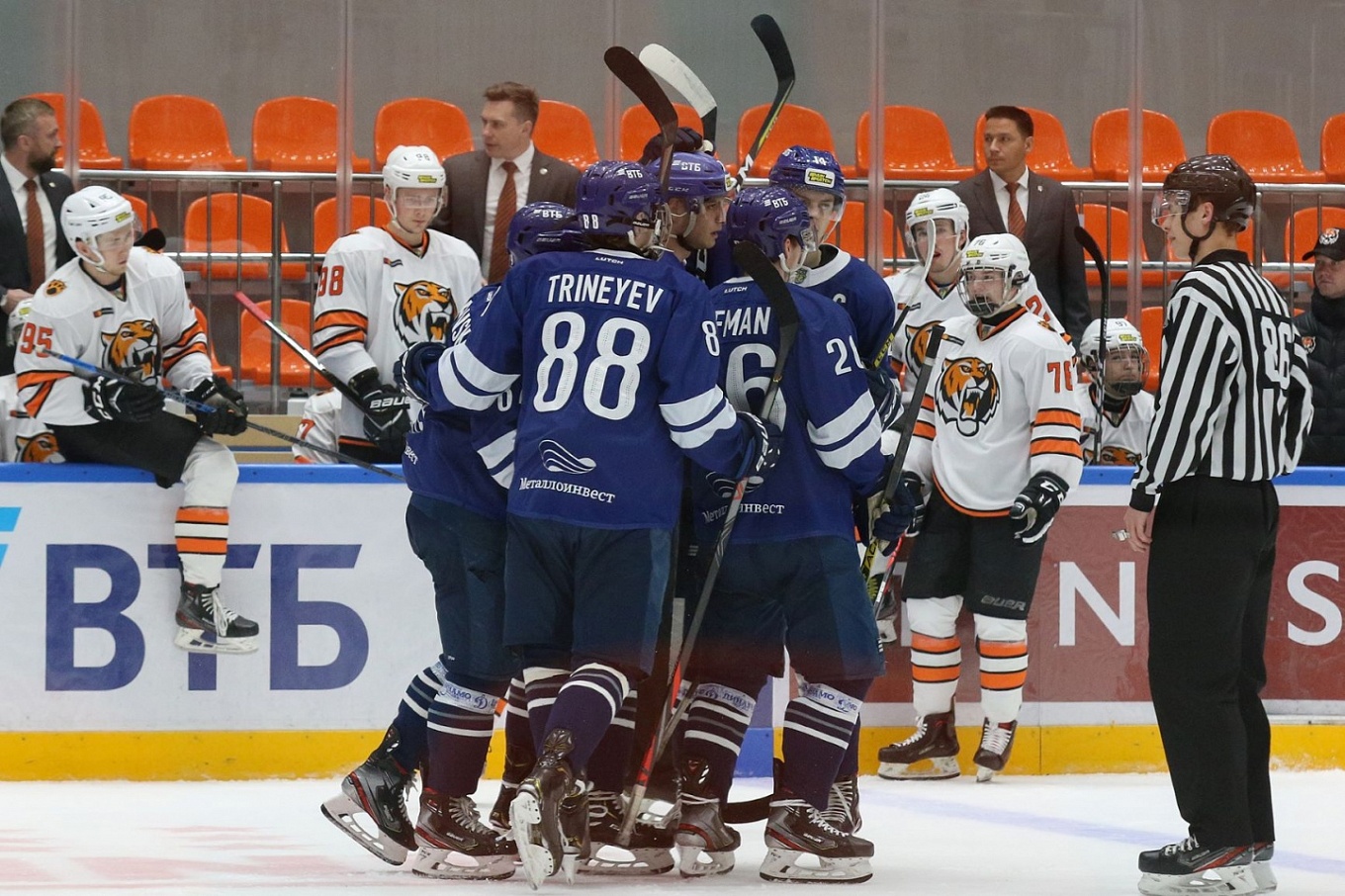 Three regular season games took place in Parimatch Junior Hockey League on October 7th. The most Western team of the league – HK Riga – played hosts to the most Eastern team Sakhalinskie Akyly, while JHC Dynamo Moscow and Almaz Cherepovets kicked off their home series. We take a look at all of the action in this daily review.

Almaz began home series with a win over Kapitan

Almaz Cherepovets managed to build a comfortable lead in the opening 15 minutes of the game. Vladislav Kuznetsov and Ivan Rogov got a goal each past Artemy Pleshkov in a span of a minute, while Maxim Nevolin converted on a power play closer to intermission. Almaz also had a 2-man advantage late in the period but HC Kapitan Stupino were able to stand their ground.

The visitors began the second period with a quick goal – just 90 seconds after the play resumed the puck ended up in the back of the net off a soft shot from the blue line that was deflected past Evgeny Lalayants. However, Stupino couldn’t build on the success. The game even out down the stretch and even though both teams kept creating scoring chances, Kapitan ended up having just a sole goal in the game. Almaz take it 3-1 and beat Kapitan for the fourth consecutive time.

In their last outing HK Riga had snapped a long winning streak of one of the top Western Conference teams – JHC Dynamo Moscow. Moreover, Latvian side got reinforcements just in time for the game against Sakhalinskie Akuly, who reside at the bottom of conference standings. Miks Tumanovs, Rudolfs Polcs and Karlis Bucenieks joined the team and Riga looked poised for the win. However, it was the visitors who opened up the scoring. Just over a minute after the puckdrop Bulat Minnekhanov sent it past Eriks Vitols to put the ‘Sharks’ in the lead.

After that it was all Riga. With four minutes remaining to play in the period Harijs Schmitz sent it past Semyon Maiko and just 26 seconds into the second frame Rudolf Spilva put the home side in the lead. Karlis Skrastins set the final score five minutes into the third period. With this 3-1 loss Sakhalinskie Akuly now have 10 in their last 11 games. HK Riga win their second consecutive game.

JHC Dynamo Moscow climb on top of the West

The gameday came to an end in Krasnogorsk where another team from Russia’s Far East – Amurskie Tigry Khabarovsk – faced JHC Dynamo Moscow.

The visitors had to come back from behind twice in the opening period of play. First Ignat Korotkikh responded to Nikita Lukhovskoy’s marker, which came just 43 seconds into the game, and then Yegor Kharchenko found an answer for Arman Iritsyan’s tally. Dynamo dominated in the following 40 minutes and went on to score as many as seven unanswered goals. Midway through the game Yaroslav Lyuzenkov’s men converted twice on a power play and forced Alexander Yunkov to swap Alexander Yevgrafov for Yuri Cherkashin in goal. It didn’t do Khabarovsk any good. In the first six minutes of the third stanza the blue-and-white scored three goals, further improving the lead. Lukhovsky and Nikita Machulin finished the game with two goals each, while Maxim Makhrin racked up three assists.

With the final score being 9-2 Dynamo enjoyed their most blowout win of the regular season and soared to the top of the Western Conference. Amurskie Tigry lose their fourth consecutive game.