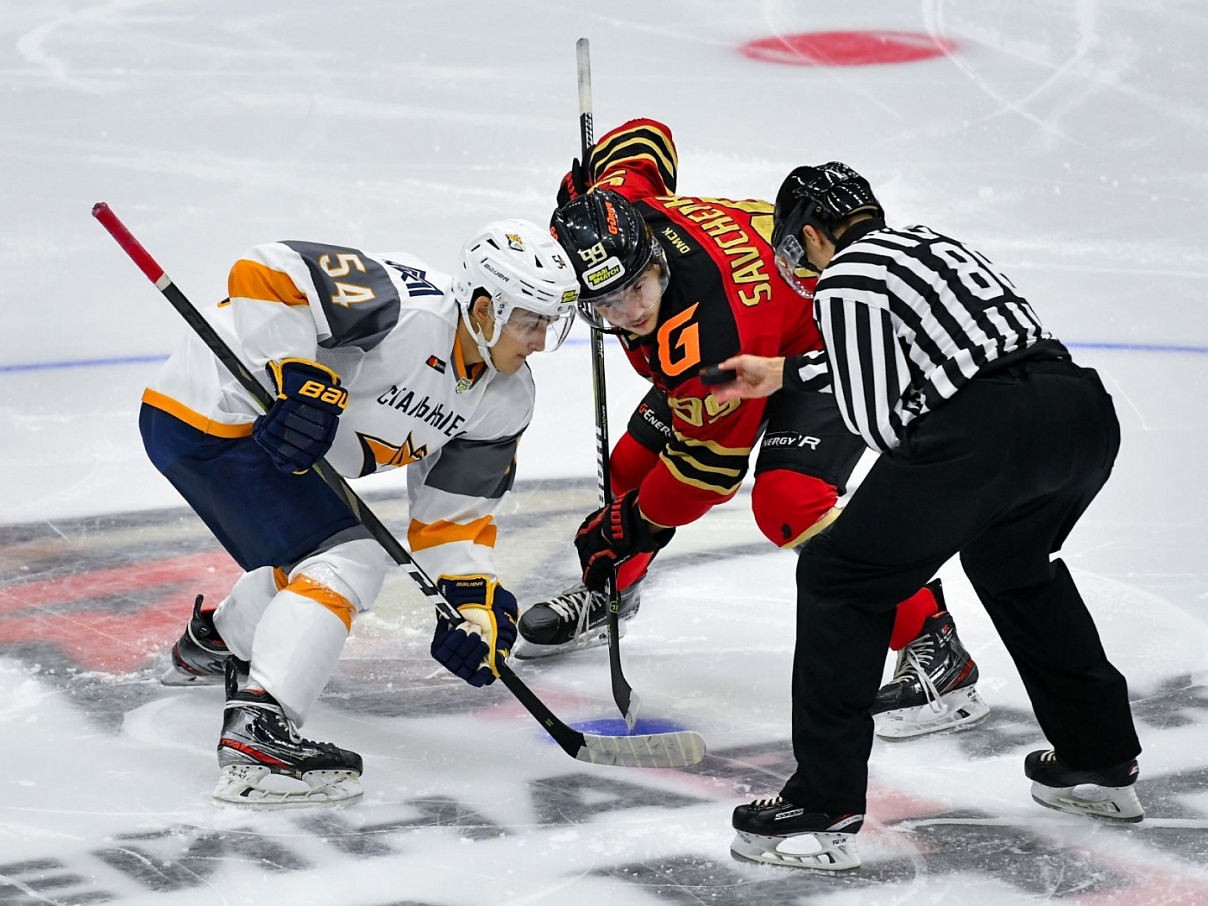 Two regular season games took place in Parimatch Junior Hockey League on October 6th. We take a look at matchups in Omsk and Khanty-Mansiysk in this daily review.

First game of the day took place in Omsk, where the ‘Hawks’ played hosts to Stalnye Lisy Magnitogorsk. Home team dominated in the opening period. Omskie Yastreby began creating scoring chances right out of the game, putting a lot of pressure on Ilya Nabokov and his defensemen. The visiting goaltender had to make several huge saves to his team in the game but he was beaten midway through the period. Ruslan Gazizov finished off a neat passing play and but Omskie Yastreby in the lead. The game followed the same scenario in the second half of the frame. Home team continued to possess the puck more often and take more shots, while the ‘Steel Foxes’ responded with rare transition plays and counter-attacks against goaltender Andrei Mishurov. As a result, the Hawks took three times as many shots as the opposition and yet failed to further extend their lead before the intermission.

Magnitogorsk managed to even-keel the game in the second stanza. That was made possible largely due to the fact Stalnye Lisy scored a quick goal. Four minutes into the period Nikita Grebenkin found the back of the net. The teams traded offensive rushes, creating a lot of scoring opportunities at both ends of the ice. However, neither of them was able to capitalize on it. The visitors picked up the pace closer to the intermission once again. Magnitogorsk took a late penalty, presenting the opposition with a great chance for a go-ahead goal, but the latter couldn’t convert on the ensuing power play.

Stalnye Lisy took two more minors early in the third period, allowing the home side to focus on offense and create a few scoring chances. Magnitogorsk survived the penalty kills but Omskie Yastreby still ripped dividends from their constant pressure. With six and a half minutes remaining to play in regulation Vladimir Mashkov scored the Hawks’ second goal of the game. Magnitogorsk did their best to force overtime but they couldn’t get the equalizer neither on a power play, nor at even strength. Omskie Yastreby enjoy a hard-fought 2-1 win.

Avto Yekaterinburg dominated in the early minutes of the game. Mamonty Yugry found themselves down a man just over a minute in, which allowed the visitors to pitch camp around Ilya Stupin’s net. Nevertheless, Avto were unable to convert on their initial power play attempt and Khanty-Mansiysk pushed the play away from their territory. Home team put together several good offensive rushes, forcing Mikhail Isayev to make a few flashy saves. Yekaterinburg took a penalty of their own midway through the frame. The visitors managed to survive the penalty kill, which was followed by a very energetic finish of the period and it was up to Stupin to bail out Khanty-Mansiysk. Yekaterinburg kept peppering him with shot at even strength and on a power play and yet couldn’t get anything past him. As a result, there was no scoring in the opening period.

The teams didn’t opt for the same fast-paced hockey in the early minutes of the second frame. However, home side found themselves down a man soon enough once again and Yekaterinburg almost never left the offensive zone for the entire two minutes. The ‘Mammoths’ killed off the penalty, but then had to deal with being down by two skaters. Amazingly enough, Avto couldn’t convert on the man-advantage either. Stupin stopped every shot he had to face and Yekaterinburg never got anything past him, despite spending the last moments of the stanza in the offensive zone. The teams were still deadlocked 0-0 coming into the third.

The visitors had another chance to get in the lead early in the second frame but Yekaterinburg failed to convert on yet another power play opportunity. Avto went on to get two consecutive penalties after that and Khanty-Mansiysk made them pay. Ivan Vorobyov converted on a 2-man advantage and Mamonty Yugry took a 1-0 lead. Nearly the exact same thing transpired in the second half of the period. Yekaterinburg went down 2-man once again and home side scored another goal – this time Grigory Nemchinov found the back of the net. The visitors rolled the dice and pulled their goaltender for the extra attacker but to no avail. Alexander Golovin scored on the empty net with a minute remaining to play in regulation and thus set the final score. Mamonty Yugry blank Avto Yekaterinburg on home ice and enjoy a 3-0 win.