“THE GREAT THING ABOUT HOCKEY IS THAT ANYONE CAN PROVE HIMSELF”. HK RIGA PLAYERS COMMENT ON THEIR KHL DEBUT 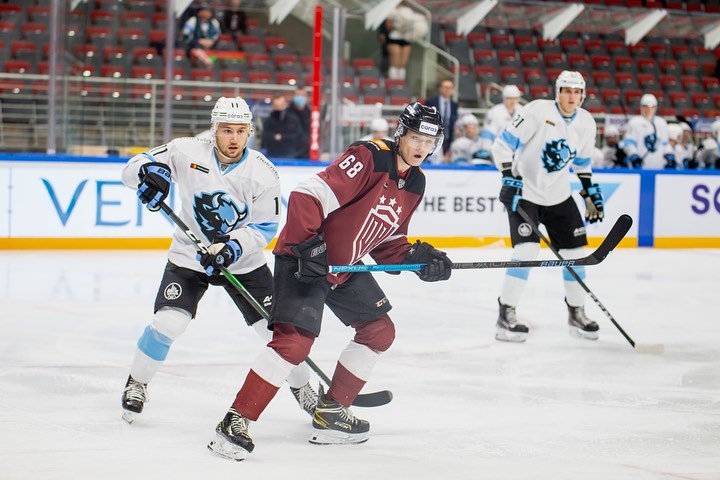 Interview
“THE GREAT THING ABOUT HOCKEY IS THAT ANYONE CAN PROVE HIMSELF”. HK RIGA PLAYERS COMMENT ON THEIR KHL DEBUT
Share

Dinamo Riga played their first game in KHL after a long pause. As many as six HK Riga players made their debut in the big league for Dinamo – Karlis Bucenieks, Nikita Mateiko, Gustavs Millers, Rudolfs Polcs, Glebs Prokhorenkovs and Miks Tumanovs. Dinamo won the game against Dinamo Minsk, one of the top Western Conference teams, 4-3 in the shootout.

“Young HK Riga players got their chance. They did a great job and I’m thankful to them for the way they performed tonight,” said Dinamo head-coach Peteris Skudra. “Actually, their rhythm of the game is currently even better than ours because they played regularly in Junior Hockey League. The boys had just one practice with us prior to the game but they managed to grasp out basic tactical demands. Everyone’s performance played a positive role. Gustavs Millers drew two penalties, while Glebs Prokhorenkovs scored a very important goal. The debut will boost the boys’ confidence and Dinamo needs that kind of energy right now.”

- Your assistants Raimonds Vilkoits and Aleksandrs Nijivijs had worked with HK Riga last season. Did they help you with the rookies?
- They helped me in gathering information on the players. Mostly personal details about the boys because they know them better. Our entire coaching staff follows HK Riga. It’s important for us to know how they play and their condition. That is especially true for those who are on the verge of getting to the pro level. Perhaps, right now there aren’t a lot of players who are ready to become regulars on Dinamo but they’re getting their chances. That’s the great thing about hockey – everything changes fast in the sport and everyone gets a chance to prove himself and get a roster spot.

HK Riga forward Glebs Prokhorenkovs was the first star of the game. The 18-year-old made his Junior Hockey League debut this season and was dressed as the 13th forward for the game against Dinamo Minsk. That didn’t stop him from getting almost nine minutes of ice-time and scoring a late goal to force overtime.

“I didn’t expect at all to be put on the ice at such a crucial moment,” shares Prokhorenkovs. “To be honest with you, I didn’t even think I would play because I was dressed just as the 13th forward. But the coaches trusted me with substantial ice-time, especially given that it was my debut game.

“I scored when we had six skaters on the ice because it was right after our coaching staff had called time-out. Pavel Chernov took a shot, the puck bounced to me, I kicked it first and then buried it with my second touch. I was lucky enough to take a shot off! I was overwhelmed after that because I scored my first KHL goal in my debut game and at such a crucial moment!”.

Prokhorenkovs was named the player of the game and presented with his puck he scored his debut goal with.

“I didn’t expect my teammates to choose me as the player of the game,” notices he. “They presented me the puck, that I scored, and I had to give a speech.”

The game against Dinamo was third in as many days for Prokhorenkovs as before that he had played a back-to-back series against JHC Atlant Moscow Region.

“Obviously, I’m exhausted. Even before the game I felt that I didn’t have fresh legs after two Junior Hockey League games. But I found the strength to play another game. Good pre-season came in handy there. I’m going on the road trip with Dinamo now so I have to recover for the next game. I’ll just sleep for some extra hours and will be good to go again!”.

“Prokhorenkovs was our 13th forward for the game because he had played a Junior Hockey League game just the night before and had logged a lot of minutes there. We saw that his conditioning was good so we allowed him to play for Riga yesterday,” explains Skudra. “But we planned to let him play beforehand and put him in action early. We liked the guy’s energy and responsibility. He understood the nuances well enough along with new things and he was a huge part of our win.”

Defenseman Nikita Mateiko was another Riga player who made his KHL debut.

“The day before the game against Dinamo we were getting ready to play against Atlant in Junior Hockey League but at the pre-game skate our coach told us that we wouldn’t play because we were called up to KHL team,” says Mateiko. “I had mixed emotions at first. We were allowed to play for our JHL team and everyone wanted to help the team. On the other hand, it was great to get on KHL team roster and play a game there. I saw that a lot of teams give chances to their young players this year. I watch SKA [St. Petersburg], Salavat Yulaev [Ufa] and Lokomotiv [Yaroslavl] games. I knew that young players would get a chance to prove themselves this year. That’s why I worked a lot on JHL team and did everything I could so that the coaching staff would notice my effort.”

- Were you nervous before making JHL debut?
- I was a little nervous but it faded away after the very first shift. To get in the game quicker I made a couple of hard hits against Dinamo captain Rob Klinkhammer. Besides, I took a few shots on net and that helped me get more confidence. There weren’t a lot of fans at the game but our Riga teammates were in the stands and they supported us. A lot went right for me in the game. I have a lot of positive memories. For example, clean breakouts or won battles for the puck.

- What was happening at the bench when Prokhorenkovs tied the game up with a late goal?
- I saw that everyone was really happy. I mean, we tied the game and were right back in it! It was especially encouraging that it was a Riga player who even it up. We congratulated and supported him at the bench. It was a very emotional moment. And those emotions led us to victory!