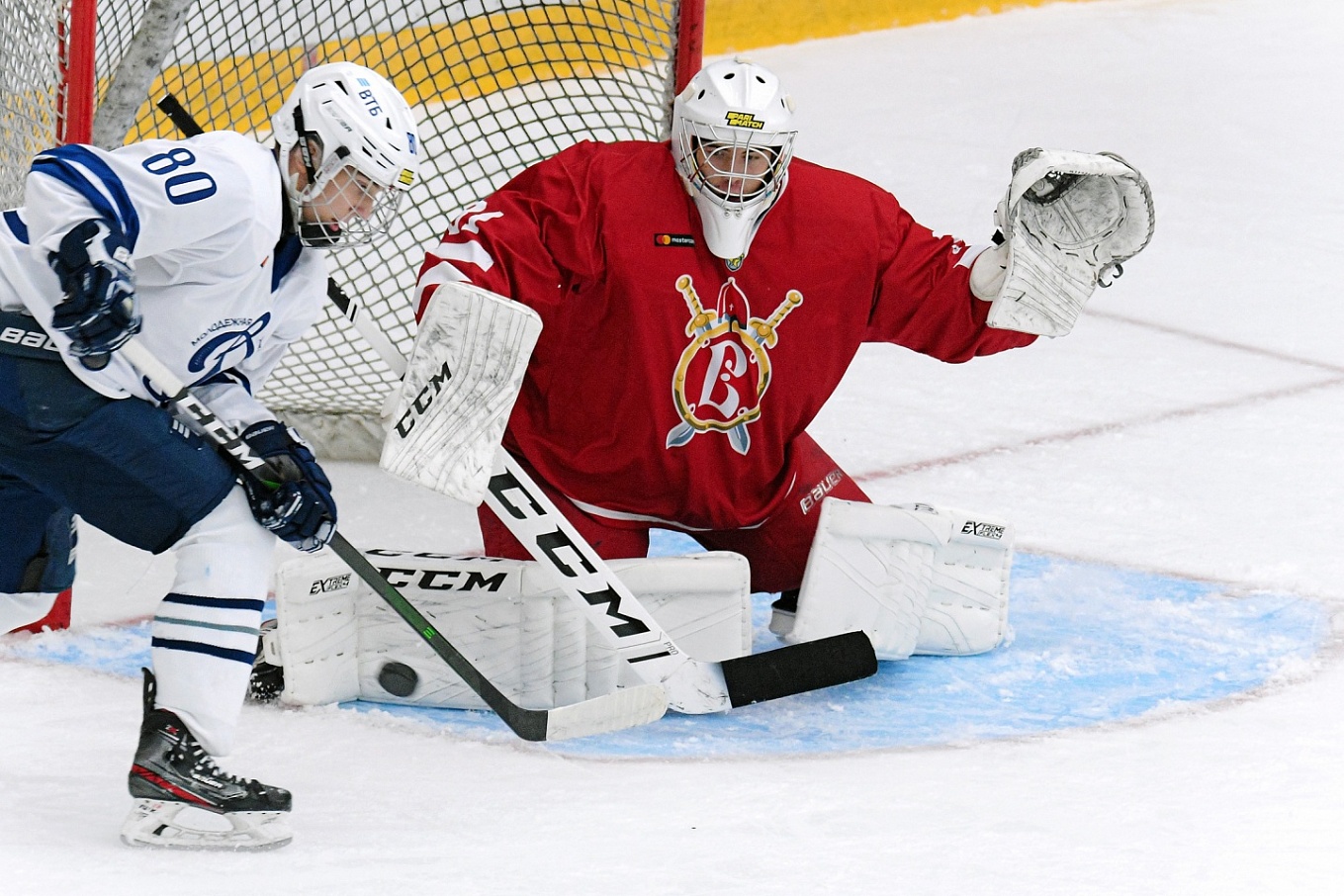 It was busy on the last day of September in Parimatch Junior Hockey League regular season as nine games took place. We take a look at key action in this daily recap.

First game of the day took place in Ufa as neighbours in the Eastern Conference standings went up against each other – Tolpar played hosts to Omskie Yastreby. The day before the visitors had enjoyed a win in overtime and this time the teams had to go the extra mile as well. The ‘Hawks’ dominated in the second frame after a scoreless first period of play. Semyon Astashevsky put Avangard’s major junior team on the board and soon after that Ilya Chernikov capitalized on a power play. Home team responded with a goal by Alexander Chyorny. Notably, Tolpar had another marker of theirs waved off due to a high stick.

Home team managed to even it up as one of their most productive defensemen found the back of the net – Sergei Safin-Tregubov hit the twine five minutes into the third stanza. Extra period solved nothing this time around and the visitors prevailed once again in the shootout. Arseny Gritsyuk scored the winner.

JHC Dynamo St. Petersburg lost several players over the road trip. The visitors dressed just 18 skaters for the first game at Legends Arena and for the second part of the back-to-back their roster listed just 16. Due to these adjustment Dynamo began the game with caution taking just four shots on net in the opening 20 minutes of play. Spartak Moscow came out swinging right out of the gate and had three power play opportunities. Home team failed to convert on either of them but just as Sergei Bolshakov left the penalty box, Oleg Korchagin sniped one home with a wrist-shot using defenseman as a screen to open up the scoring.

Dynamo play their best hockey in the second period this year. After the intermission the visitors grabbed the momentum and forced Vladimir Tyurikov’s men to take penalties instead. St. Petersburg wasn’t taking a lot of shots and Platon Zadorozhny stopped all of them.

Home side couldn’t stay out of the box in the third stanza and St. Petersburg pounced on the opportunity. Dynamo picked up the pace after second intermission and solved Zadorozhny, converting on a 2-man advantage. Spartak challenged the play for goaltender intermission but the officials confirmed the call on the ice after video review.

The fate of the game was decided in overtime. Dynamo let the red-and-white engage in transition play, Korchagin burnt past his defenseman, dangled past goaltender Makar Chufarov and put it home. Spartak defeat Dynamo St. Petersburg 2-1 on home ice.

JHC Dynamo Moscow had the momentum on their side in the opening period of play, taking twice as many shots as the opposition. However, Russkie Vityazi’s goaltender Savely Sherstenyov was on top of his game. Moscow Region team capitalized on their scoring chances better. Home team opened up the scoring midway through the first period as Dmitry Zaitsev hit the back of the net. Russkie Vityazi took a lot of penalties and lost one of the top players shortly before the intermission – Semyon Demidov got a game-misconduct.

The blue-and-white kept the pressure on in the second frame and turned the tables. Halfway through the period Matvei Sumin brought the game back to even and just five minutes later Nikita Lukhovsky put Dynamo in the lead. Yaroslav Lyuzenkov’s men ran into a penalty problem themselves in the third stanza but Russkie Vityazi couldn’t convert on their power play attempts. On one occasion the puck ended up behind Maxim Motorygin but it the goal was waved off due to high-sticking. In the very next shift after the disallowed goal Dynamo scored their third of the game – Arman Iritsyan set the final score.

SKA-Varyagi win their first game of the season

Last game of September took place in Tula where Mikhailov Academy faced SKA-Varyagi Leningrad Region for the second consecutive time. Home team got off to a good start and took twice as many shots as St. Petersburg in the opening frame. However, goaltender Gleb Saranchuk didn’t let anything past him. Mikhailov Academy once again outshot the opposition but the quantity didn’t transfer into quality. SKA-Varyagi were careful with their scoring chances and went on to get two goals on just six shots. Vladimir Sychyov opened up the scoring just two minutes after the first intermission and midway through the frame Artur Gimaletdinov used confusion in the slot in front of Alexander Yevdokimov to his advantage to double the lead for the visitors.

With a minute remaining to play in the period Mikhailov Academy finally solved Saranchuk. Vladimir Kapkin scored off a great individual effort on a power play but the goal was waved off due to goaltender interference. St. Petersburg extended their lead again early in the third period of play. Matvei Michkov skillfully weaved his way around defensemen in the corner, skated to the slot and slid it past Yevdokimov.

Dmitry Vershinin’s men began having some serious problems with discipline after scoring the third goal. After taking four consecutive penalties St. Petersburg finally allowed a goal – Artyom Komarov beat Saranchuk in a 4-on-4 format. Half a minute later Vladimir Mikhailaki brought Mikhailov Academy back to within one and just 30 seconds later Stepan Melnichenko restored the parity on the scoreboard to sent the game to overtime.

Both teams had an abundance of scoring chances in the extra period of play. First SKA-Varyagi didn’t convert on a breakaway attempt and in the very next shift Mikhailov Academy rang the puck of the crossbar, much to Saranchuk’s relief. Despite the number of chances, the fate of the game had to be decided in the shootout and SKA-Varyagi prevailed. With this 4-3 victory SKA-Varyagi became the last team to win a game this Junior Hockey League regular season. Mikhailov Academy lose their fifth home game out of six.