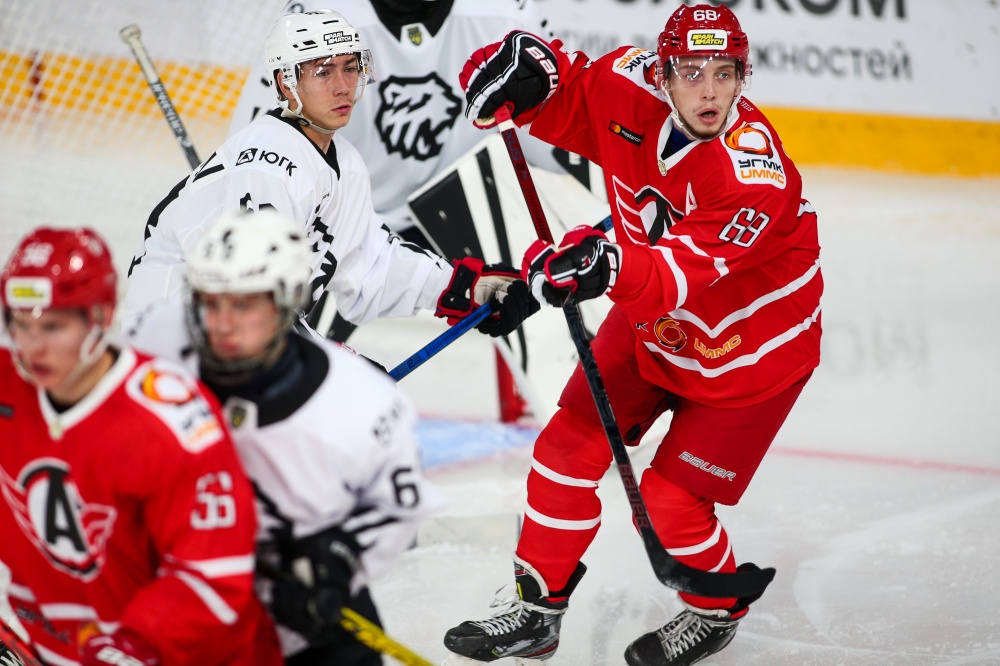 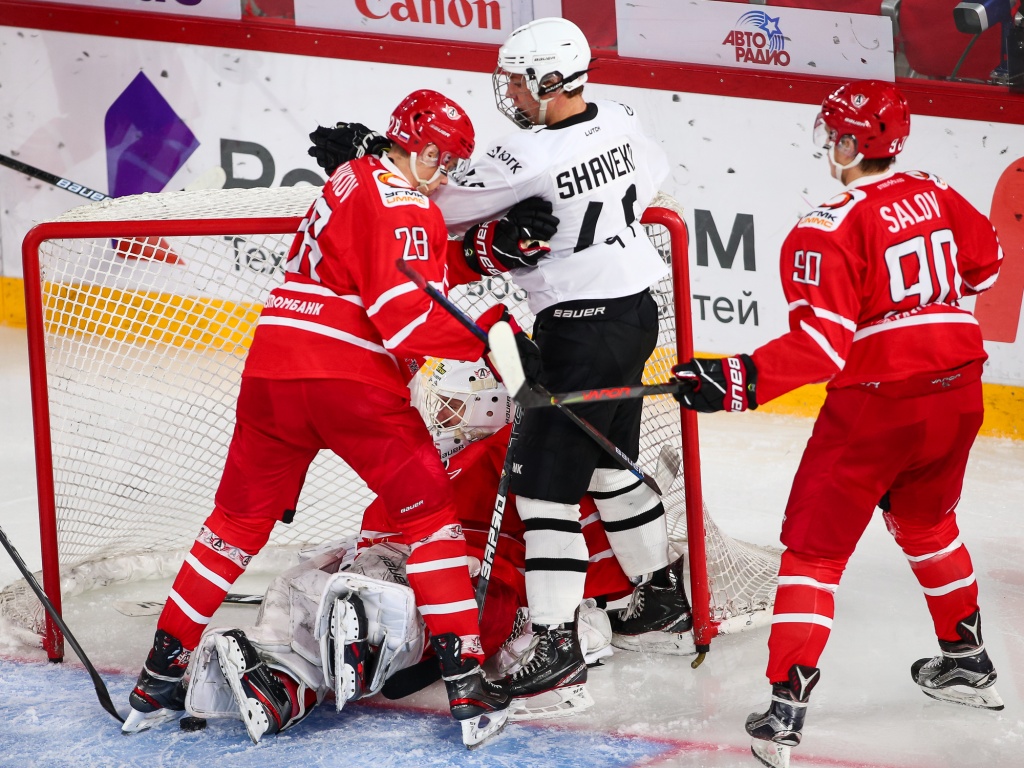 Avto played their first game of the Parimatch Junior Hockey League regular season in Yekaterinburg as they faced Belye Medvedi Chelyabinsk, who came into the bout having played two games against Tolpar Ufa – the top Eastern Conference team last season. The opponents were evenly matched in the opening period of play as both created scoring chances and took a number of shots. However, goaltenders Mikhail Isayev and Vyacheslav Buteyets were making one save after another and despite a number of great scoring chances there was no scoring in the first frame.

The flow of the game didn’t change in the second stanza. ‘Polar Bears’ possessed the puck more often but Yekaterinburg put together several great transition plays. The game followed the scenario right until the last few minutes of the period when Stepan Ostrovsky zinged one past Buteyets with a long shot to home side in the lead.

The visitors threw everything they had at Avto in the third period looking for the equalizer. They pinned Yekaterinburg to their net and were close to tying it up but home team managed to keep them at bay and then went on to double their lead – Valery Sitnikov found the back of the net. Chelyabinsk did their best to salvage the game and with a minute remaining to play in regulation Konstantin Lukin finally solved Mikhail Isyaev. Nevertheless, that was all Belye Medvedi could get. Yekaterinburg enjoy a narrow 2-1 win on home ice. 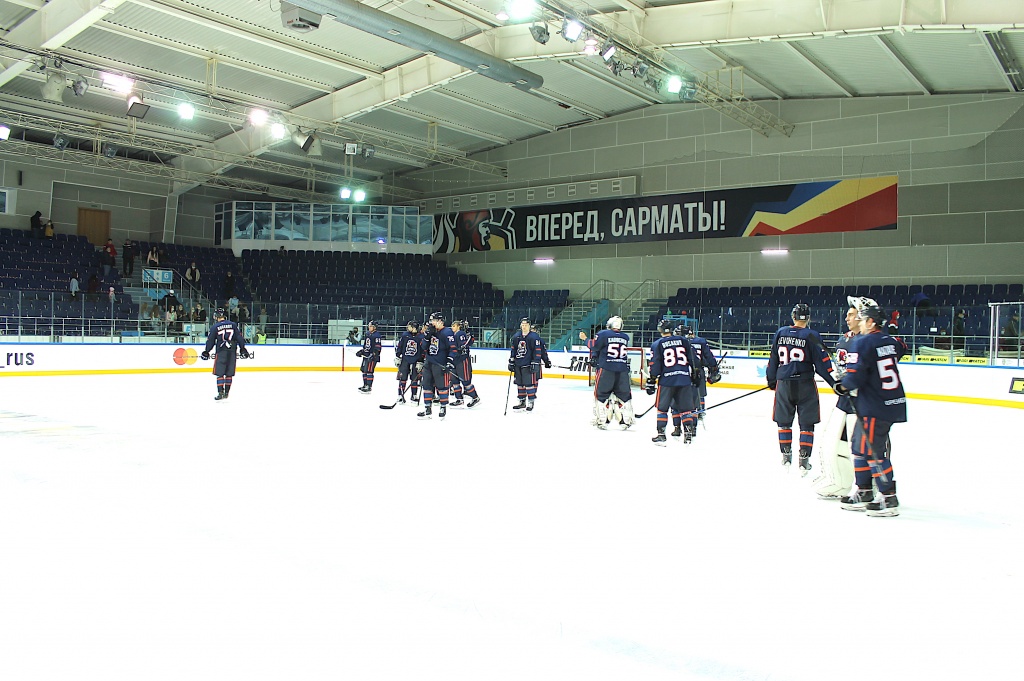 Other ‘Bears’ – Kuznetskie Medvedi – played against Sarmaty in Orenburg. Home side got off to a solid, grabbed the momentum right out of the gate and Ivan Nazarov put Sarmaty in the lead just under three minutes in. However, soon after that Orenburg took a minor penalty, which led to Demid Panichkin tying the game up on the ensuing power play. Home team retook control of the game after that, set camp around Alexander Dyubin’s net but couldn’t recapture the lead before the intermission.

Early in the second period the visitors took the lead as Kirill Shumilov found the back of the net with a snipe. Kuznetskie Medvedi put the focus on protecting their own net after that, while Sarmary increased their pressure. Home team tried to stay hot offensively at even strength as well as while killing penalties but they couldn’t get anything else past Dyubin. As a result, despite taking three times as many shots as the opposition after 40 minutes of play, Orenburg were down by a goal going into the third frame.

Orenburg picked up right where they left off in the third stanza, doing their best to salvage the game but they couldn’t convert on their scoring chances neither at even strength, nor on a power play. Home team outshot Novokuznetsk twice in the final frame but the ‘Bears’ managed to protect their flimsy lead and walked on to a 2-1 win on the road.

Omskie Yastreby get blanked by Sputnik in Almetyevsk 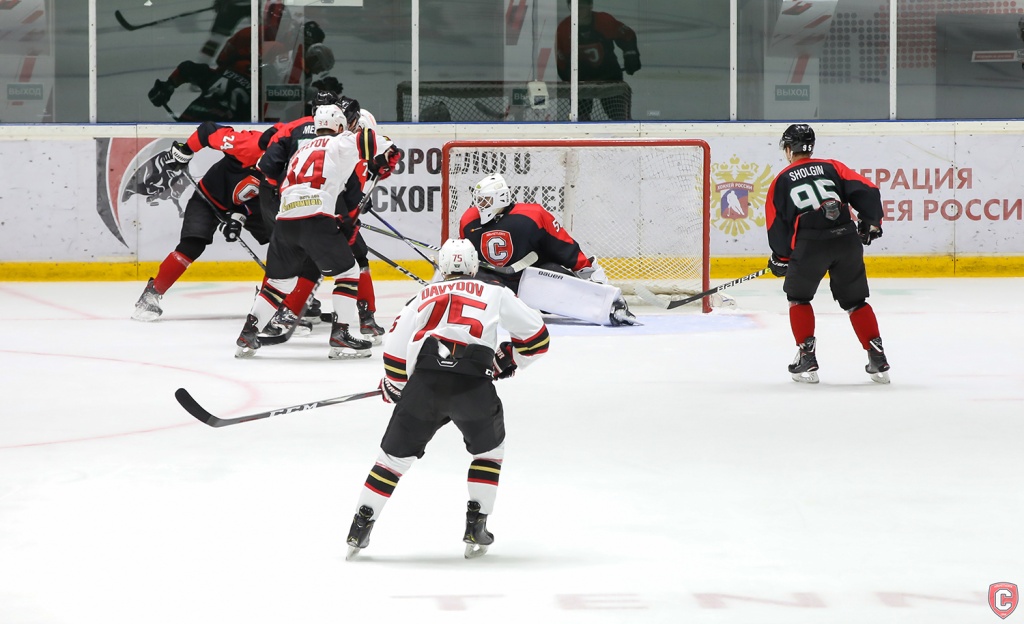 First half of the opening frame featured even-keeled hockey in Almetyevsk. The teams traded offensive rushes but there weren’t many real scoring chances. Omskie Yastreby grabbed the momentum in the second half of the period and forced Sputnik to take two minors in a row but still couldn’t convert on the ensuing 2-man advantage. As a result, the ‘Hawks’ and Almetyevsk were tied scoreless after 20 minutes of play.

Omskie Yastreby continued to play up-tempo game after the intermission but Sputnik played solid defense and responded with quick transition plays. Finally, the first goal of the game came midway through the frame – Ramil Kabirov sieved one through Andrei Mishurov to put Almetyevsk in the lead. Home team could have scored another one right after that but they couldn’t convert on a power play chance. Home team carried the 1-goal lead into the third frame.

However, Danila Kurkov extended the advantage to 2-0 slipping another one past Mishurov early in the period. Omskie Yastreby had the momentum on their side again after that and tried to save the game but home team were active on defense and kept pestering the opposition with counter-attacks. Each team failed to convert on a power play opportunity and the ‘Hawks’ ended up unable to crack Almetyevsk. Sputnik win 2-0 on home ice. 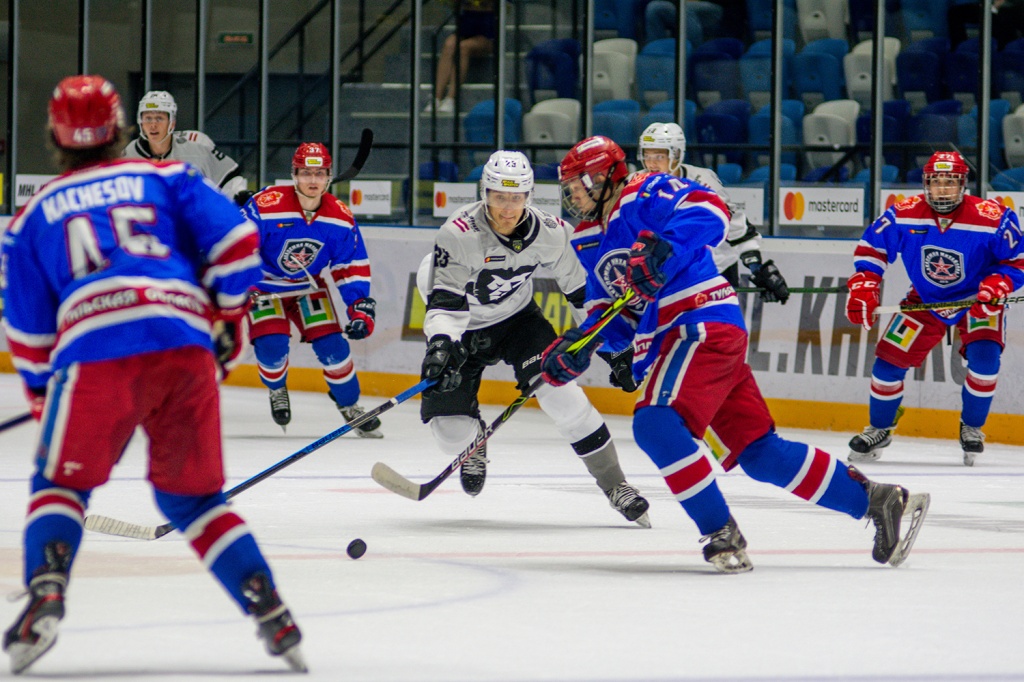 Mikhailov Academy played their second Junior Hockey League game in Tula facing the same foe – HK Riga. The visitors managed to capitalize on the first power play opportunity of the night – Danila Larionov found the back of the net. Gustavs Millers and Antons Sinegubovs had a goal each before the intermission. After that Daniyar Sultanov was replaced by Alexander Yevdokimov in goal for Mikhailov Academy. Second period didn’t bring Tula any good news either – Mikus Mintautiskis and Rudolfs Polcs had a tally each to improve the lead to 5-0.

Only after Gleb Prokhorenko made it a 6-0 hockey game did Tula finally score their very first Junior Hockey League goal as Dmitry Semyonovsky hit the twine. A brawl broke out late in regulation, after which Mikhailov Academy converted on a power play twice – Alexander Kondratenko and Vladislav Kovalyov had the markers. The goal-fest was over after that. HK Riga leaves Tula with four points in a bag. 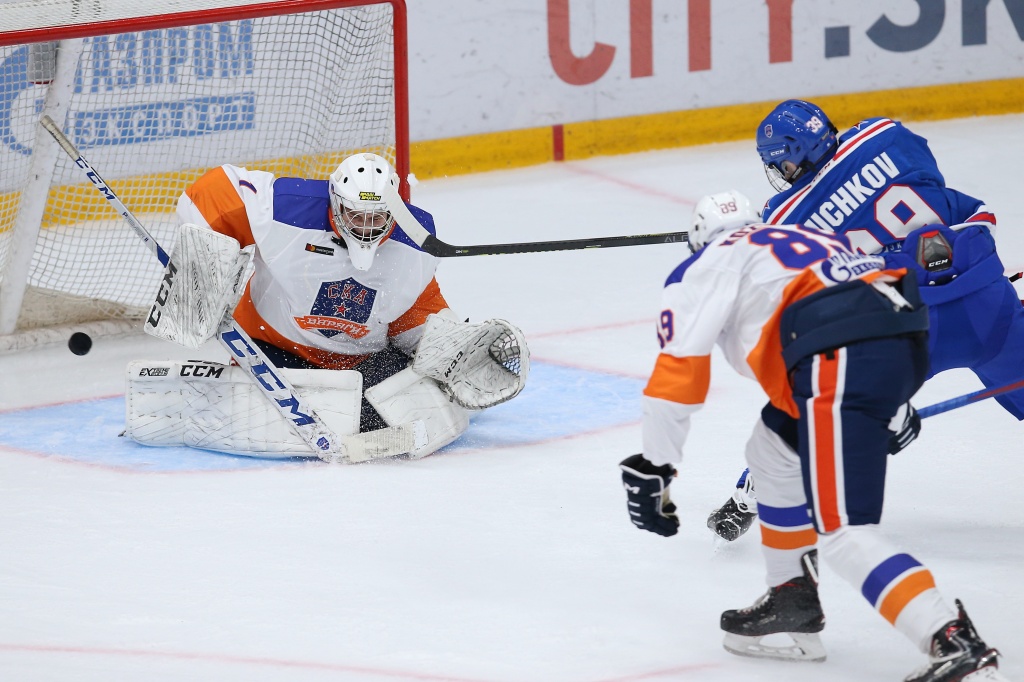 SKA-1946 continued to battle against their St. Petersburg rivals SKA-Varyagi at SC Hockeytown. First goal of the game came four minutes in – Maxim Krovyakov sniped one home from the high slot. Ten minutes later Yegor Gurzanov skillfully tipped Nikita Chibrikov’s shot into the net. Only after having allowed another goal did SKA-Varyagi get one themselves – Nikita Dimitrov converted on a power play.

Home team finished off the opposition in the third frame. Spiridonov and Krovyakov added one goal each again – the former capitalizing on a man-advantage – and Matvei Michkov put the cherry on top. SKA-1946 enjoy a blowout 6-1 win over their rivals.

Dynamo get their revenge against rivals 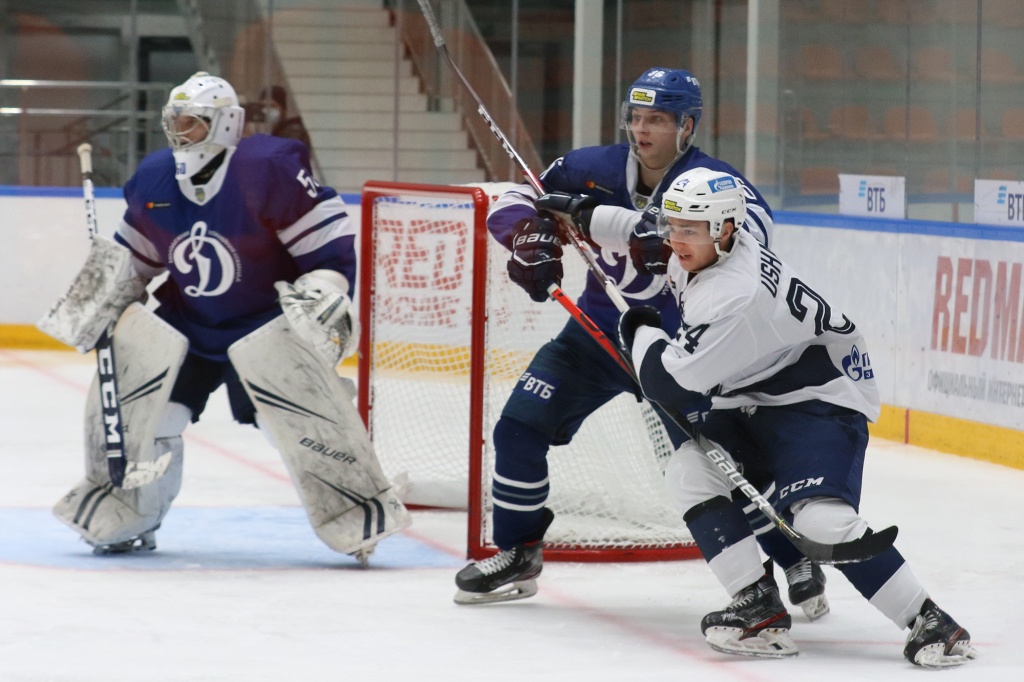 Dynamo rivalry continued in Krasnogorsk. First period of action ended with hard-fought draw. Moscow scored first – Artyom Ivanov found the back of the net five minutes in but they couldn’t hold the lead for long. A little later St. Petersburg didn’t convert on a power play but brought it back to even with a tally by Ivan Kolomiytsev. Home team re-captured the lead midway through the second frame – Mark Katsevich registered his third goal of the year.

St. Petersburg put a lot of pressure on Moscow’s netminder Dmitry Menshatov but couldn’t change anything on the scoreboard, despite having three power play opportunities. Moscow pulled through and got their revenge for the loss they suffered a day ago.