“NO NEED FOR EXTRA MOTIVATION FOR A RIVALRY GAME”. COACHES AND PLAYERS COMMENT ON THE SEASON-OPENER 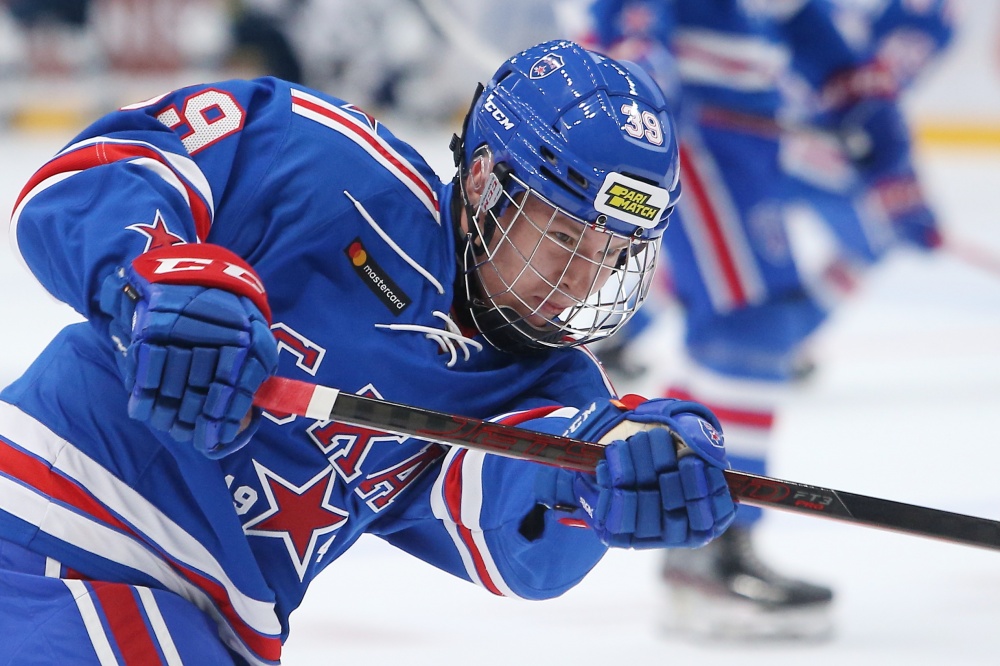 Interview
“NO NEED FOR EXTRA MOTIVATION FOR A RIVALRY GAME”. COACHES AND PLAYERS COMMENT ON THE SEASON-OPENER
Share

Players and coaches shared their thoughts on the first game of the 12th Junior Hockey League season. JHC Dynamo faced their St. Petersburg rivals SKA-1946 and enjoyed a 5-2 win. 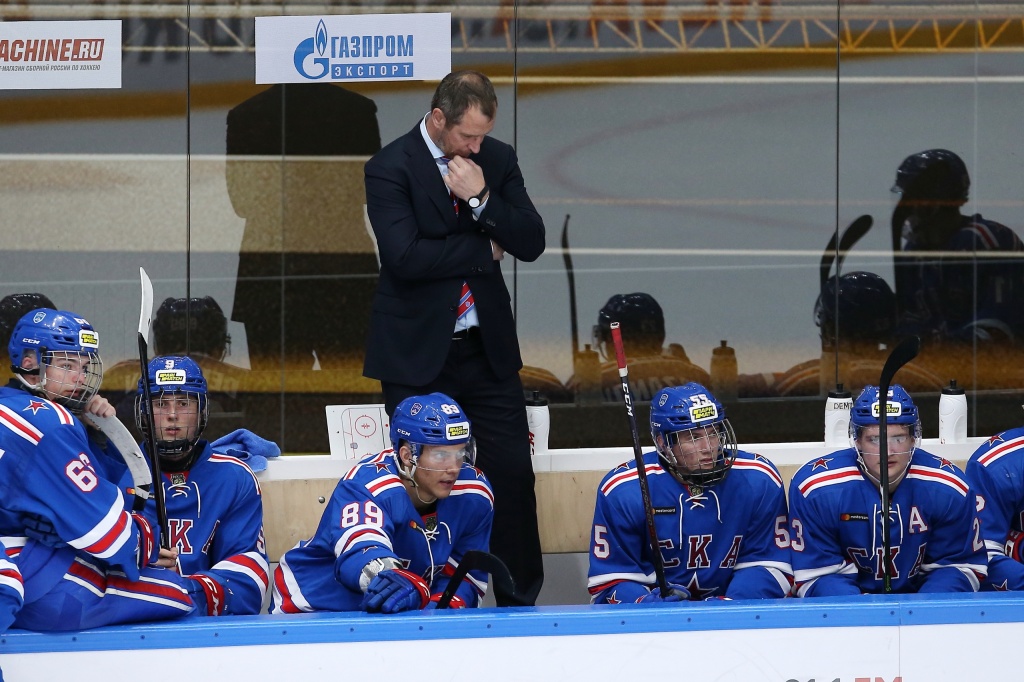 “We have a new team. We had two full lines filled with rookies who made their Junior Hockey League debut. They need to to adjust to the league. Dynamo had a much more experienced team, with good chemistry and older players so they felt more confident coming into the game. Having said that, we had the momentum on our side from the second period. I thanked the guy for battling till the end. They managed to come back in the game score-wise and play-wise. Today we didn’t lost to Dynamo in a lot of things and were even better in some aspects.

“We’re going to work on smoothing the transition into the game. Today the boys were a little nervous. After all, it was the first game of the season and many made their debut in the league. Besides, it was a rivalry game and they even presented a cup prior to it. So, perhaps, some boys felt too nervous to play to their full potential in the beginning and that’s why we let out opponent build such a huge lead.

“We created many opportunities to tie the game but that wasn’t enough to pull off a comeback. Mainly, we needed to convert on our chances better. We hit the post twice, created a lot of scoring chances on a power play but couldn’t convert on them. On top of that we got a silly penalty late in regulation and our opponents were able to capitalize on it.

“We put the guys, who were at our KHL team camp this summer, on our first line. It was a tough day for them as well. For example, [Marat] Khusnutdinov and [Yegor] Spiridonov played their first game for SKA-1946 after missing the entire pre-season with the team. So they needed time to adjust to the team and find their rhythm. I wouldn’t say that they were invisible today on the ice. They didn’t score but all in all they did a lot of right things out there.

“We begin the JHL season with a St. Petersburg rivalry. These games against Dynamo are huge for the city. That’s why the boys hit the ice motivated. We are very glad that organizers let the fans come to the rink. They created a great atmosphere.” 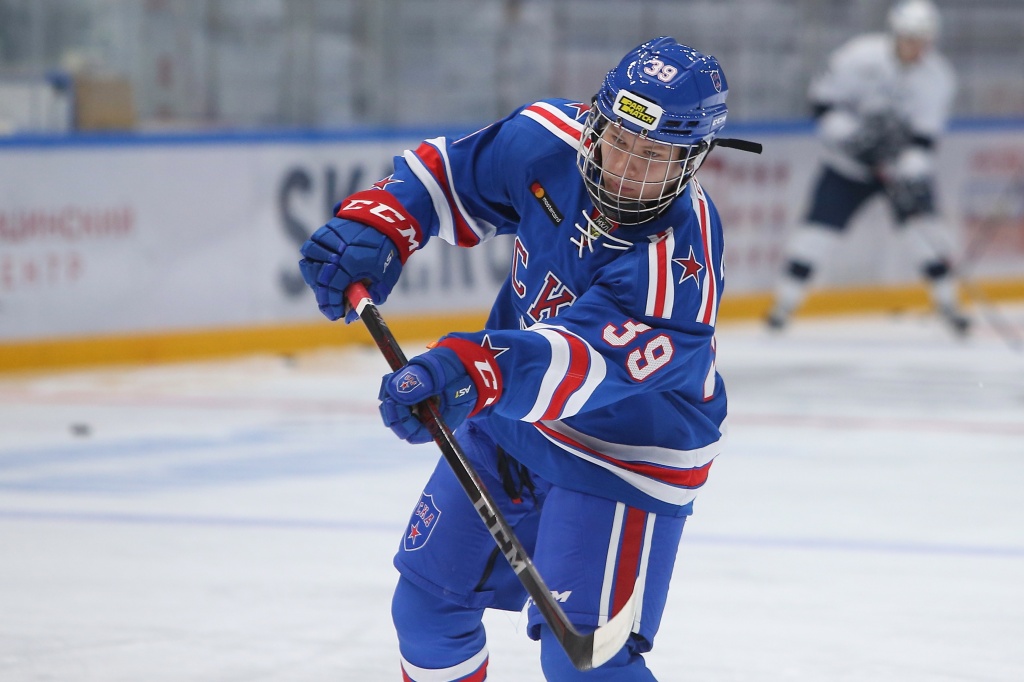 “It turned out to be an exciting game. Sure, there were older guys out there but when you hit the ice, no one looks at your passport. Everyone plays to their max. I wouldn’t say that it was tough for me. My teammates really helped me out, everyone worked really hard but something went wrong for us today and that’s why we lost. But tomorrow we have another game, we’re going to make the right adjustments and will go into the game with the right mindset to ensure a win.”

- You scored your first Junior Hockey League goal in your very first game – and at 15 years old no less. How did you like it?
- It was so positive! Nikita Dishkovsky skated to the net on the play, he couldn’t get a shot away but luckily the puck bounced to me. I took a shot in the direction of the net right away just as the coach told me to and scored. Although, when I scored the goal, all I could think of was that we had to score at least two more (smiles). We had other scoring chances but we hit the post twice. It’s frustrating that we couldn’t tie it up in the end.

- How did you like the ambience at St. Petersburg rivalry?
- It’s was overwhelming, it truly felt special. It was great to be a part of the game. I liked everything. It’s unfortunate that due to limitations a lot of fans weren’t allowed to come to the game. I want to thank everyone who came out today to support us!

- Given the fact that your team didn’t play a lot of games this pre-season, did you have trouble adjusting to new demands and new teammates?
- We were able to play several exhibition games but I had enough time to adjust to my teammates. We’ll get into the rhythm as they season goes and get better and stronger. It was just the first game so we need to make the right adjustments and get better with every game. 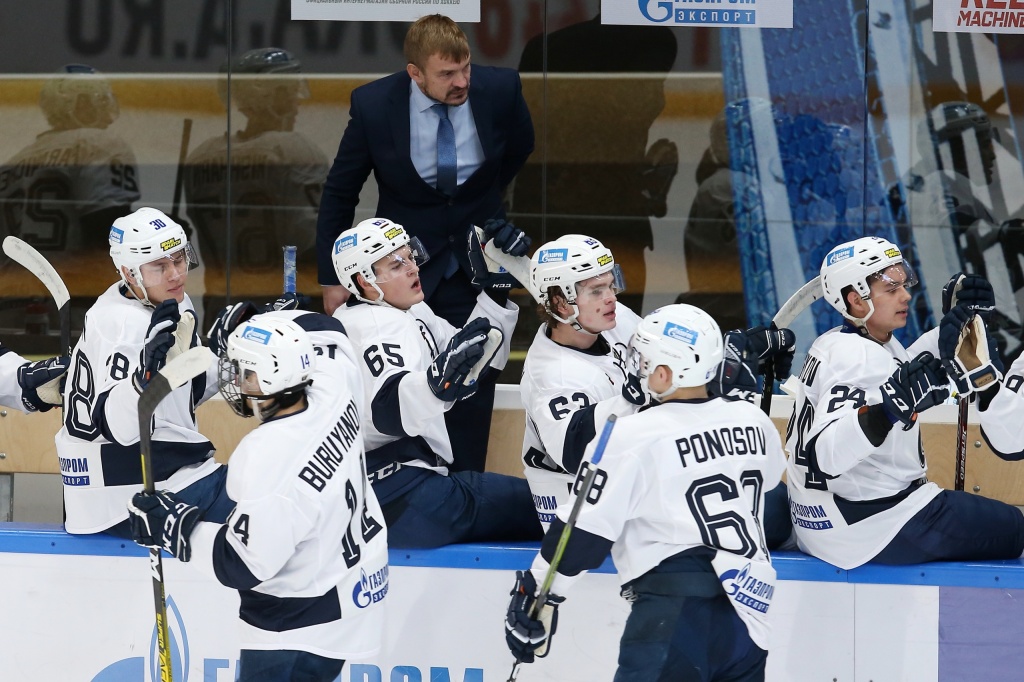 “It was a great season-opener. I’m satisfied with the result but I the quality of our game has to be improved. We did more or less ok for the first game of the season.

“Part of our game plan was not to allow a quick goal. We had trouble with that in our last few pre-season games so we had to come back from behind right from the beginning. This time we were able to get a quick goal ourselves, which helped us a lot. Late in the second period we went a little soft and deviated from our brand of hockey. The boys overplayed their shifts a few times, skated back and lost their concentration – we allowed two goals because of that as a result. The boys did a great job because they pulled themselves together in the third frame, were able to protect the lead and get a win.

“We didn’t have a lot of rookies in this game. It’s almost like I was the only Junior Hockey League rookie on our team (laughs). I couldn’t afford getting nervous so it wouldn’t rub off on my team. But first JHL, obviously, means new emotions. As for the boys, they’ve been there before so they weren’t worried.

“The ambience at St. Petersburg rivalry was excellent. I’m certain that if it weren’t for the pandemic, there would have been a lot more fans in the stands. Players don’t need any extra motivation for such games. Everyone was pumped up to the max for the game against SKA-1946, especially since it was the first game of the season.” 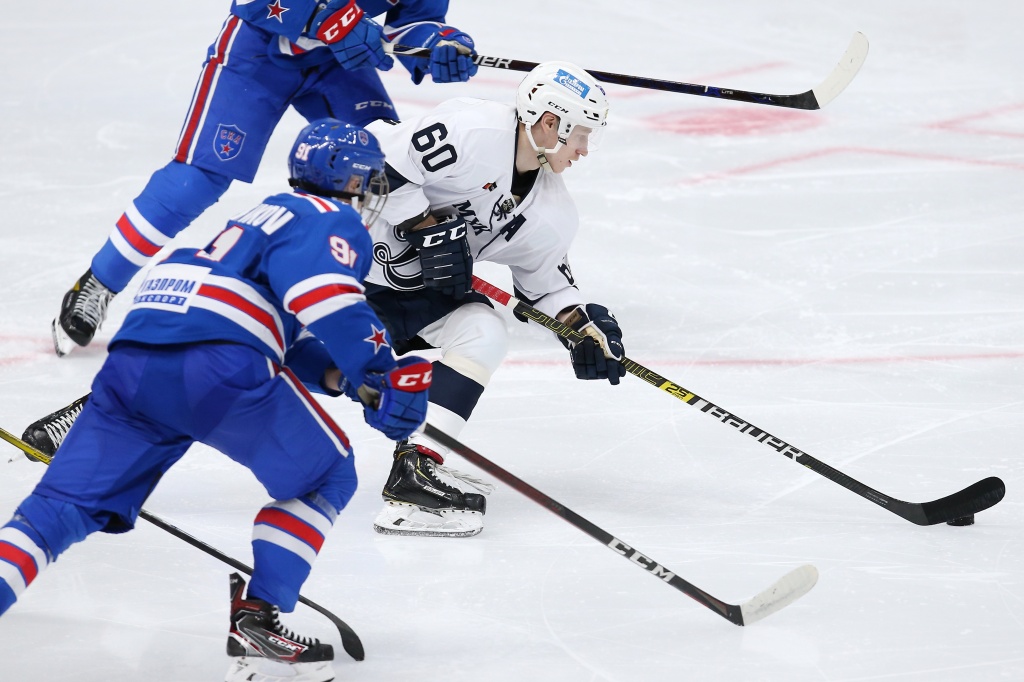 “I’m very glad to score the first goal of Junior Hockey League season, it brings only positive emotions. I got the puck behind the net, skated with it and took a shot. Actually, it’s just a regular goal.

“We got off to a very strong start in this game. Being pumped out to the max for the rivalry came into play and on top of that it was the first official game for everyone in a long time so everyone was eager to play. Coaching staff motivated us very seriously. Everyone understood the responsibility. We really wanted to begin the season with a win and that’s why we did our best to play the best we could. Such a win at the start of the season will boost our confidence. The most important thing right now is to keep at it and play consistently throughout the season.

“All in all, we knew that we won’t get an easy win over SKA-1946 and that we would have to earn it through hard work. Our confidence and our physical conditioning, on which we worked all summer long, combined for our win. The only frustrating thing was that we could get Makar Chufarov a shutout.”