“I DIDN’T KNOW WHAT TO EXPECT FROM MY FIRST KHL GAME”. AMURSKIE TIGRY PLAYERS MAKE THEIR DEBUT FOR AMUR 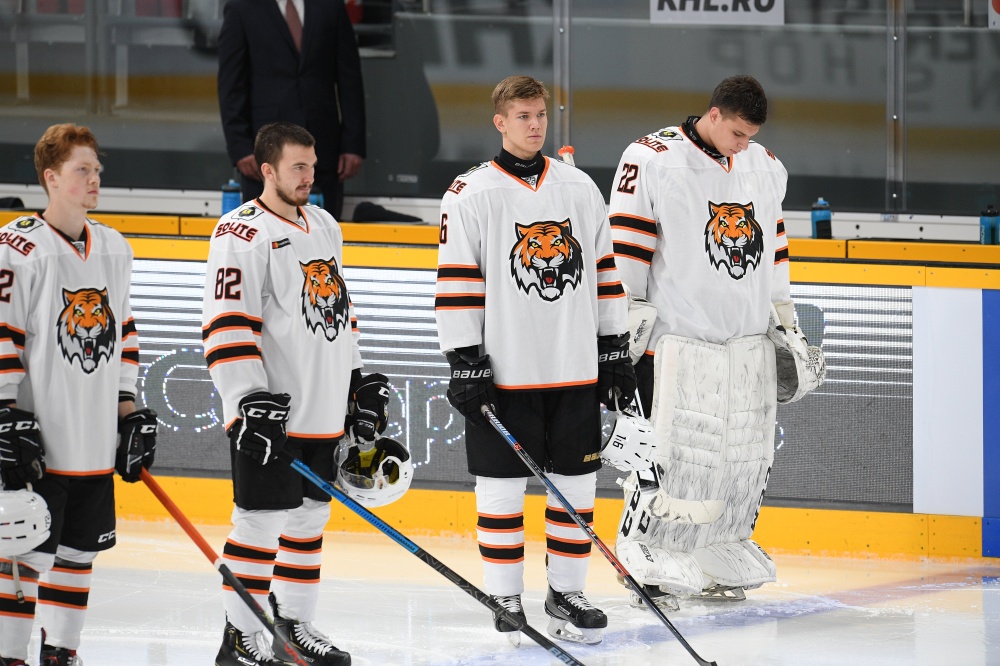 “I DIDN’T KNOW WHAT TO EXPECT FROM MY FIRST KHL GAME”. AMURSKIE TIGRY PLAYERS MAKE THEIR DEBUT FOR AMUR
Share

KHL’s Amur Khabarovsk went on their first road trip of the season with a far-from-optimal lineup. Several of their players tested positive for coronavirus and are currently quarantined and surveyed by doctors. On top of that, a number of other players recover from injuries, while import players are unable to join the team. Found himself in the situation, Amur head-coach Pavel Torgayev had to fill in the roster with Amurskie Tigry players. As a result, as many as seven ‘Tigers’ made their KHL debut this Thursday night, six of which are still Junior Hockey League eligible.

Khabarovsk ended up losing the game 6-4, blowing two leads, including one by two goals midway through the second period.

“The boys did their best, even though it was difficult for them. After all, the level of opposing players was higher,” commented on his young players after the game Amur head-coach Pavel Torgayev. “Mostly, the rookies’ task was to get our team leaders some rest. They were able to achieve the goal, no questions. Right now I wouldn’t want to single any of the guys out. Everyone played at the same level.”

Mikhail Radenko and Yegor Domnichev got the most ice-time from Pavel Torgaev as they played on the fourth line.

“The call-up was very unexpected,” shares Mikhail Radenko. “We were at Amurskie Tigry camp in Moscow Region and after dinner we were asked to hand in our passports. They told us that we would go on the road trip with Amur. First we had to wait to clear coronavirus tests. After that we went to the airport and joined the team there.”

The rookies had just one practice with Amur before making their JHL debut.

“Actually, I didn’t know what to expect from my first KHL game. I was worried because the call-up came so unexpectedly,” notices Radenko. “At practice I felt right away that the level of hockey was very different. I tried to follow experienced players and note things about them so I could add it to my game.

“As for the tactics, coaches told us that it wasn’t all that different from the one we have at Amurskie Tigry. We spoke with the coaches about the fundamentals – breaking out, rushes… We didn’t have to change a whole lot so it was comfortable to play. Besides, the chemistry we had also helped. I played with Yegor Domnichev and Danil Fyodorov the whole pre-season. It’s the line we had in all summer games. I thought they would put us on different lines with more experienced players but the coaches decided to keep our line as it was.

“I thought that I would have trouble keeping up with the pace of the game at first and that I would be noticeable. But I feel that our line didn’t stand out a lot. Perhaps, we might have slumped a bit in the third period.”

- All rookies say that KHL is more of contact league than JHL.
- I felt it last night. You can’t switch off on the ice even for a second. Opponent plays tight and fast hockey, they don’t let you keep your head up. I tried to play that brand of hockey as well. I was able to lay a good hit in the first period. All in all, I tried to stay close to my opponents and steal pucks.

- What was happening in the dressing-room after the game?
- Coaches congratulated everyone on making the debut. They asked us not to get frustrated and get ready for other games on this road trip. We’re going to face some solid opposition in our next games – Avangard [Omsk] and Lokomotiv [Yaroslavl]. However, we have already one game under our belt. Now we know what we have to be ready for and it should help us. Now we have to improve the speed of making decisions and shooting – in the game against Severstal [Cherepovets] we even managed to create a scoring chance but didn’t take a shot.

- How will this experience affect your play in Junior Hockey League?
- I’m always ready to go back to JHL and help Amurskie Tigry. This season a lot of experienced players left the ‘Tigers’ so I’m going to have to step up and become a leader. KHL experience is going to help me in that regard. I will see the ice better, read the plays better and make decisions quicker.