“The first time I came to Platinum Arena was three years ago. Before that I had never seen live hockey but I had seen it on TV. Having seen live action, I realized that watching the game from a couch in front of TV and from the stands – are two absolutely different things. Hockey is sport number one in Khabarovsk. The whole town lives for it.”

“My first junior hockey game was against Krylia Sovetov [Moscow]. I was in the stands and didn’t understand anything at first. I was just compelled by the action. It was overwhelming. I remember a fight broke out and I felt that even though I wasn’t actively participating in it myself, I still was very much into it. It’s an indescribable feeling. That’s when I realized that the sport hooked me. After the game I opened the team’s Instagram page, checked their schedule and started going to every game. Thanks to hockey I now have a hobby – I began photographing Junior Hockey League games. The team’s photographer helps me our and gives advice. It’s fair to say I learn on the job. And, of course, that’s how I got to meet the boys from the team and I started sharing game photos with them.”

“Unfortunately, I haven’t been able to go to any away games. I plan to do that in the future. I will definitely go to the rivalry game in Vladivostok. Hopefully, I will be able to do that and support our boys. Usually I follow their away games on Junior Hockey League official website, unless they’re happening late at night. After all our team competes in the Western Conference and given the distance it’s not that easy.” 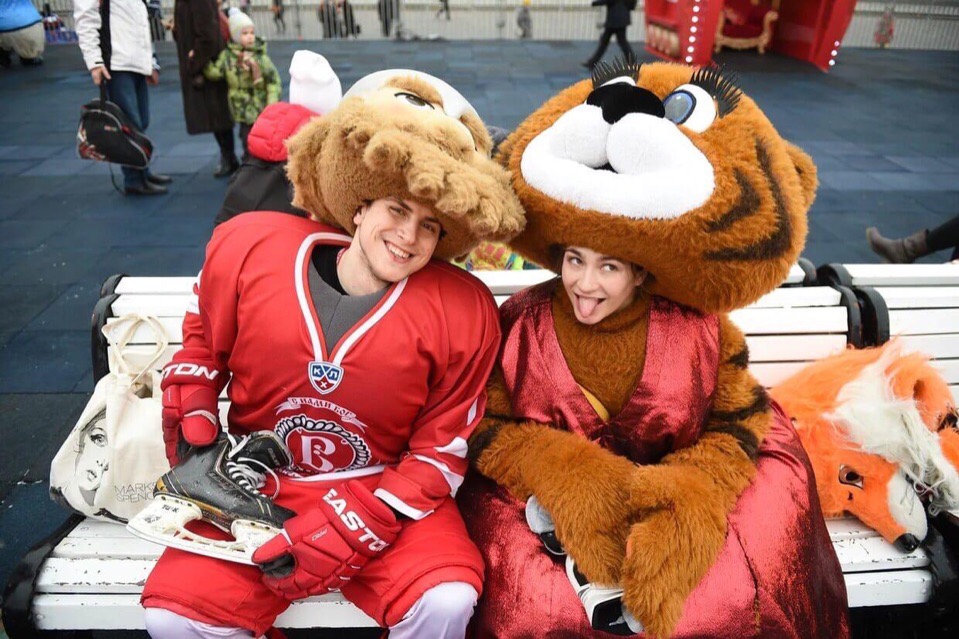 “We have an awesome fan-sector. I remember I first got into Amur [Khabarovsk] volunteers movement. I was helping out with organizing games. I met a lot of people for whom hockey is not just a game. That’s how I started going to fan-sector. They always have drums, flags and other merchandize with them. The club helps us out in that regard as well. I can definitely say that watching hockey from the usual stands and fan-sector is very different. It’s about emotions, engagement, energy and a lot of positive nuances. You just have a lot of fun because of what you’re doing. Actually, last season I put on the mascot costume a few times and actively interacted with our fans in the stands. That’s so awesome! Do we give gifts to our players? Fan-sector always congratulates the players on holidays and gives them cards. For example, for New Year’s the guys give their favorite players gifts and for Valentine’s Day our girls give them valentines.”

“I think that would have to be the first game – the one against Krylia Sovetov. It was so emotional as if I put on the skates myself for the first time. I mean, I used to play bandy myself but it doesn’t stop me for feverishly supporting my beloved Tigers.”

“One time when I was donning our mascot Barkhat costume, I held a baby for an entire period. Tiger is his favorite character and he comes to the games specifically to play with him. It’s so cute and fun. I will also always remember my trip to KHL All-Star Game. My friend and I went there in mascot costumes. It was so awesome. We visited Red Square and made a lot of new friends. The ambience was through the roof. I’m thankful to the club for the opportunity. Hockey broadens borders and brings awesome people into your life.”

“First of all, a real fan always supports his team despite the outcome of the game. Second of all, a true fan is up for constructive gambling – that means he understands the upsides and shortcomings of his team. He has to dig hockey (laughs). Third of all, I think every fan – or ‘real fan rather – has to know his team’s history.”

“Boys, remember that the most important thing is to never lose hope and give everything you got for the job that you love. Hockey is a team sport. Relationships within the team and team chemistry are very important. If you love the sport and work hard, it will give you back.”