JHC Spartak
News
Edgar Varagyan: “When we were on the plane, guys told me: “He is an enforcer, he would beat you up with no sweat.” I thought: things happen, he would beat me up and so what?”
“As time goes by, taking a flight to Sakhalin feels almost like being stuck in Moscow traffic.” Daniil Veremeichik – the JHL's Best Player on Social Media
“Working out in a gym is a type of rest for me.” Ivan Murashov had the best season of his career, dreams of playing in the KHL and has not eaten any fast food for two years
“Condensed milk is the only unhealthy food available for the national team.” Raul Yakupov – about the Black Sea Cup, the KHL debut and the season with Reaktor
“Four years in the JHL was a great time. Winning the Cup with Dynamo was the best moment.” Ivan Didkovsky about junior phase of his career
Metsola-type player of Krasnaya Armiya, Peksa’s progress and solid Gromovik. Dream team goalies
Arseny Gritsyuk is the top rookie of the KHL season
A bronze medal with Irbis, VHL appearances and the first goal for Ak Bars. An eventful season for 19-year-old Dmitry Katelevsky
Share

Junior Hockey League media relations department continues the Room To Grow series, in which we take a look at every team of the 11th season. JHC Spartak Moscow enjoyed almost a regular season almost identical to last year’s. The red-and-white made the playoffs only as the 8th best team in the Western Conference.

JHC Spartak Moscow, led by Vladimir Tyurikov for the fourth consecutive season, had a bumpy ride in the regular season. The red-and-white began with two consecutive losses to SKA-1946 St. Petersburg, notably unbelievably falling in the second game of the back-to-back 9-0. However, Spartak adjusted their win-loss ratio after that and ended SKA-1946’s record winning streak, beating them in exciting game that went to overtime. The red-and-white had a lot of losses in November and December, which pushed them towards mid-table. Moscow fans were worried for a while that their faves wouldn’t make the playoffs this year but in the end Spartak’s direct competitors – Russkie Vityazi and Krylia Sovetov Moscow – dropped out from the race. In the opening round of the playoffs faced the very same SKA-1946 and lost the series in four games. 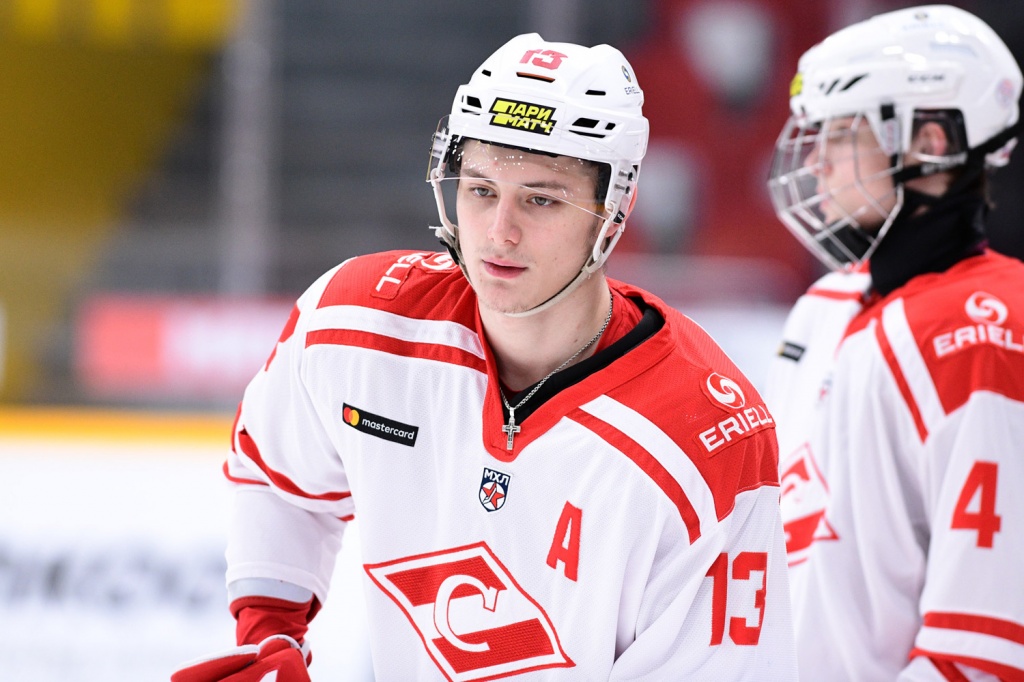 In Mikhail Shalagin’s absence, who led Spartak Moscow in goals last season and literally put the team on his back and carried it into the playoffs, the red-and-white saw other players fill in his shoes. Ruslan Novruzov led Spartak in scoring with 29 goals and 23 assists for 52 points in 64 regular season games. Kirill Tagirov finished right behind him, while JHL Challenge Cup participant Bogdan Lvutin and Andrei Legalin were tied for 3rd spot. Anton Mishakov led Moscow defensemen in points, while 19-year-old netminder Dmitry Kulikov played 37 games. Matvey Botov and Pavel Kanayev played two fewer games each and 17-year-old Dmitry Shatailo made his Junior Hockey League debut.

Ruslan Novruzov was the only player to appear in every regular season game.

The most productive line – Maklozyan-Tagirov-Novruzov. The line combined for 19 goals.

JHC Spartak Moscow opened scoring 35 times and allowed the first goal of the game on 29 occasions.