NOT A WORD ABOUT HOCKEY. MAXIM MUSOROV Snezhnye Barsy
News
Maxim Krovyakov – 2021/2022 Playoffs Most Valuable Player
SKA-1946 win first championship in their history! Michkov scores game winning lacrosse-style goal
Krasnaya Armiya vs SKA-1946 in the finals! JHL deciding games schedule
“I’ll try to make it to the senior team.” Yaroslav Likhachyov finished his JHL career with a team’s record
The talent of the CSKA system rocks in the JHL playoffs. Agatha Christie helps Prokhor Poltapov prepare for games
“It’s a shame that three years in the JHL flew by so fast” – Matvei Kokovin lost a bet to Alexei Shevchenko as the White Bears failed to qualify to the playoffs
“I gave myself a choice: either to get stronger and move on, or to quit hockey” – SKA-1946’s leader talks about his season, social media, and hockey life
“Nizhny Tagil is not what it was ten years ago” – Vasily Atanasov about his hometown and his play with Mamonty Yugry

NOT A WORD ABOUT HOCKEY. MAXIM MUSOROV

In today’s edition of our continuing Not A Word About Hockey series we’re going to sit down with one of the top Snezhnye Barsy Nur-Sultan forwards Maxim Musorov. He spoke about his spare time activities, preferences in music and movies and much more.

- Usually I pick my diet myself because during the season I have to control my intake. On vacation, though, it’s up to either my mother or my girlfriend. Okroshka is my favorite meal. I like Russian and Kazakh cuisines. I also like to barbecue.
- I have pets at my parents’ and they live in another city. They have an Oriental short-haired cat named Mao. My younger brothers gave him the name because he meows all the time.
- I like to spend time outdoors. I enjoy going out for a stroll or escape to countryside or cottage with my friends and go to sauna there. I rarely watch TV at home. I prefer reading short articles and learn something interesting instead of waste time watching shows.
- My favorite movies is Mr. and Mrs. Smith. My favorite actors are Brad Pitt, Leonardo Di Caprio , Alexander Petrov and Daniil Kozlovsky. I like their charisma and how they act on the screen.
- My favorite song is Polozheniye by Skyptonit. I really got hooked on it. I listen to all kinds of music but mostly modern. The latest track I have added to my playlist was Brooklyn by Miyagi & Andy Panda. 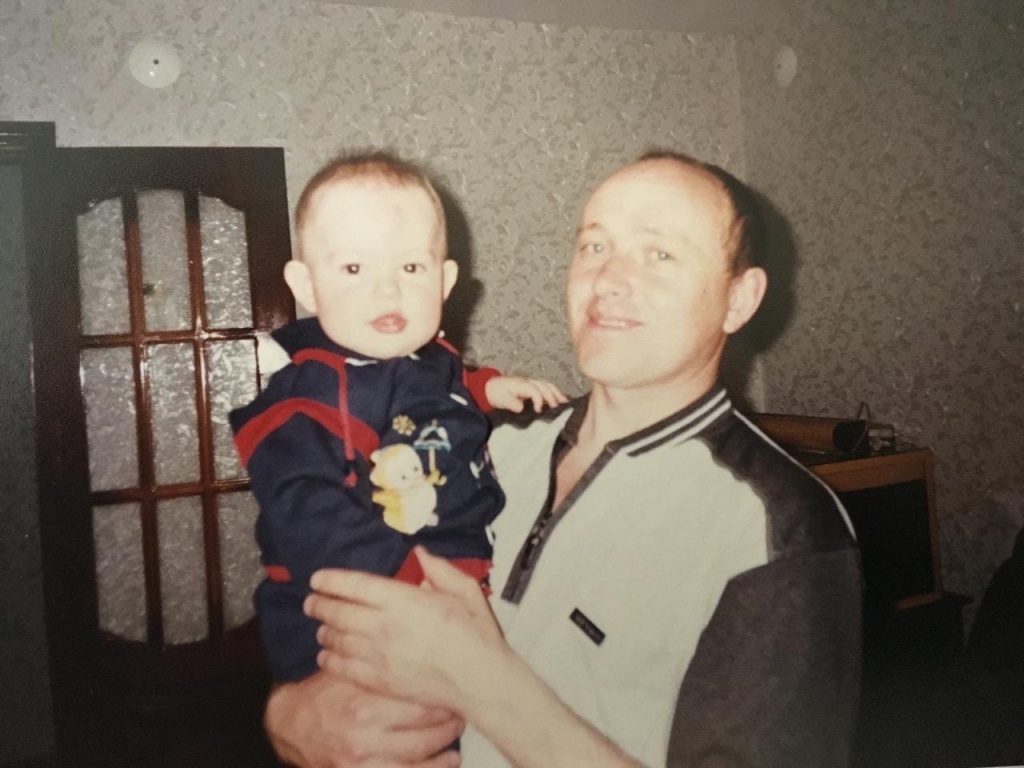 - I believe I’m a calm and cool-headed person. I don’t how else I can describe myself. I think you would be better off other people about me.
- I’m always happy when I go to the game. I don’t have any trouble with motivation. Even if something unpleasant has occurred, you forget all about it when you hit the ice and just enjoy what you’re doing.
- From my parents I inherited being nice to people, always finish what I started, perseverance and work ethic.
- I’m superstitious but not hardcore. Sometimes I have a good game and I try to remember which skate I laced up first and which knee guard I put on first so I could be successful again. When I play poorly, I switch it up. It’s funny to think of that sometimes.

- I don’t have a role model when it comes to men’s attire. I’m not big on fashion. Comfort is what matters.
- It’s mostly athletic wear in my wardrobe. I don’t pay much attention to clothing brands. I try not to think of it much. I buy whatever I like. I think the most stylish player on Snezhnye Barsy is Artyom Korolyov. He can even show up in his pajamas to practice (laughs). Usually I wear white and black clothes.
- I don’t grow beard on purpose but sometimes I’m just too lazy to shave. I think I look better with a beard than without it.

- I have a girlfriend. Her name is Daria. She loves hockey. You can say, we even met through hockey on Instagram. We met, went for a walk and it just sort of took off from there.
- Serious relationship and career shouldn’t be an obstacle for each other. On the contrary, you have to support each other when times get hard and enjoy the good times.
- The most awkward moment with my girlfriend happened when we first met. We set to meet at a certain place but I followed my navigator and ended up at the wrong place. She had to wait for me for half and hour as a result. It was pretty awkward.
- I definitely won’t sign my daughter up for hockey but I might do it if I have a son. It’s a lot of hard work, even though it’s quite enjoyable. If he’s going to like, I’ll be quite happy. 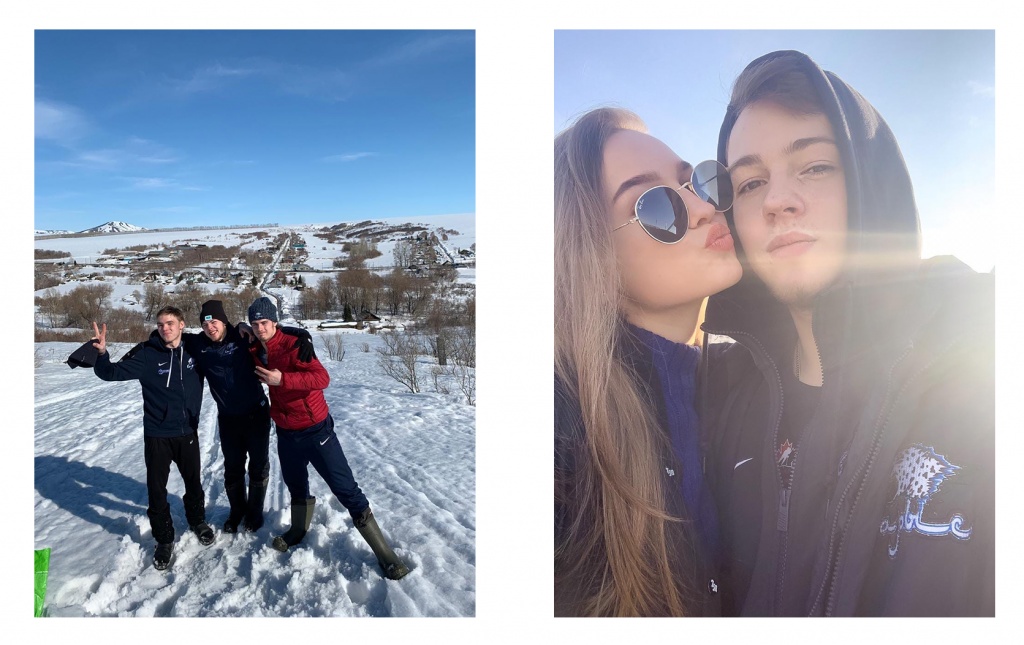 - If it weren’t for hockey, I don’t even know what profession would I have chosen. I have never dreamed of doing anything else.
- I’m in my fourth year at a college in Ust-Kamenogorsk. I will apply for a university after.
- I believe it’s important to get a higher education because nowadays you need it everywhere. If you want to get a good job, you have to study.

- When I got my first set of roller-skates for my third birthday I learned to skate. I wouldn’t leave them for a second. I even slept wearing them. My parents say that they tried to get them off me at night and I would wake up and start crying. Once my father and I went for a walk and fell hard on my knees, bruising them to blood but it didn’t stop me from wanting to learn to skate. It was the same thing with hockey. It’s the game I live for.

- I have lived with my girlfriend for two years already. She decides on my diet. I have breakfast at home and lunch is usually at the rink. I mostly eat pasta with chicken and cheese. My loved one and I often go to Asian cuisine restaurants. We like rolls and sushi.
- I have a dog. He’s 18 months old. His name is Shatik, he’s a corgi. We named him Shastik because in Super Family cartoon there is a hero who looks like him. He always runs around, never gets tried, he’s playful and positive all the time.
- I usually spend weekends with my family because due to road games we rarely get a chance to hang out. I also love videogames, especially online team games where you need to compete against other people.
- When it comes to foreign countries I’m mostly interested in USA, Switzerland and Netherlands. I would very much like to visit these countries, see their sights and, perhaps, even live there for a while to soak in the atmosphere.
- Almost all of my friends are hockey players so I get to spend a lot of time with them at practices, games and road trips.
- My favorite movies are Law-Abiding Citizen,  and I, Legend. Favorite actors are Gerard Butler and Tom Hardy. As for TV-series I would only recommend Russian shows such as Offside – it’s about soccer and Russian sports backstage – and Rich Kid, if you’re into crime series.
- I listen to Russian and foreign music all the same. The latest track I have added to my playlist was Travis Scott – The Scotts. It’s on top of the charts in many countries.

- I believe I have a difficult personality. My mood is prompt to sudden changes. I think it’s one of my downsides. But at the same time I’m honest and have good manners. My main positive trait is perseverance. When I need something, I will definitely get it.
- I never feel like not going to the game. It’s a must. It has become my job but at the same time it’s my favorite thing in the world. So there is no room for not wanting any of it.
- A real man must be an example for his family and provide for it. He also need to be the best friend. Family needs to be safe and most importantly happy.
- From my father I inherited my sports traits. He used to be a soccer player and achieve certain results. As for my mother, from her I inherited perseverance, work ethic and much more. I’m grateful to my parents for my upbringing and investing their best qualities in me.
- When I meet a new person, first thing I pay attention to is how they talk and how they handle conversation. Everything else is not as important at the first meeting.
- I don’t want to be superstitious. Sometimes certain coincidences do occur and it makes me wonder that there might be a reason for that.
- I’m a gambler but I know my limit. I always know when it’s time to stop. I have never and will never cross the line of reason.

- I don’t have a role model when it comes to men’s attire. I dress modestly myself. I often sport my club colors. As for SKA system, I would say Daniil Miromanov has the most swagger. He played in Canadian leagues and dresses stylishly.
- I prefer bright colors but I don’t care for brands. There are a lot of blue clothes in my wardrobe and our team equipment is blue as well. The color suits me.
- Beard doesn’t suit me. When it grows out, it looks like I have dirt on my face, so I shave moustache and beard.

- My better half is very positive on the hockey. She doesn’t miss a single game and always supports me. Her name is Maria. We met at a hockey game as weird as it sounds. She came to the game wither girlfriend and I was injured at the time. We sat next to each other in the stands and that’s how it all began.
- My serious relationship doesn’t affect my professional career. It’s not an obstacle. I do well on my own. I have to deal with my own problems and take care of them myself.
- I’m not going to impose my interests neither on my son, nor on my daughter. Whatever my kids want to do, it’s their choice. I don’t see a point in enforcing them into something they don’t like. That approach won’t amount to anything. There is no progress without desire.

- If it weren’t for hockey, it would have taken me a long time to find myself, most likely. I would have tried different stuff until I got hooked on something.
- The more money you make, the higher the quality of life of your family. You can’t make all the money in the world. You just have to spend it wisely and always strive to get higher.
- I study at Lesgaft University and go to every class when I have the time. All of my classmates are my teammates so I know all of them.
- Everyone needs to get a higher education, although these days it seems that even people without education can go pretty far.