IVAN MURANOV: “PERHAPS, THERE’S GOING TO BE ANOTHER MURANOV IN JHL NEXT SEASON” 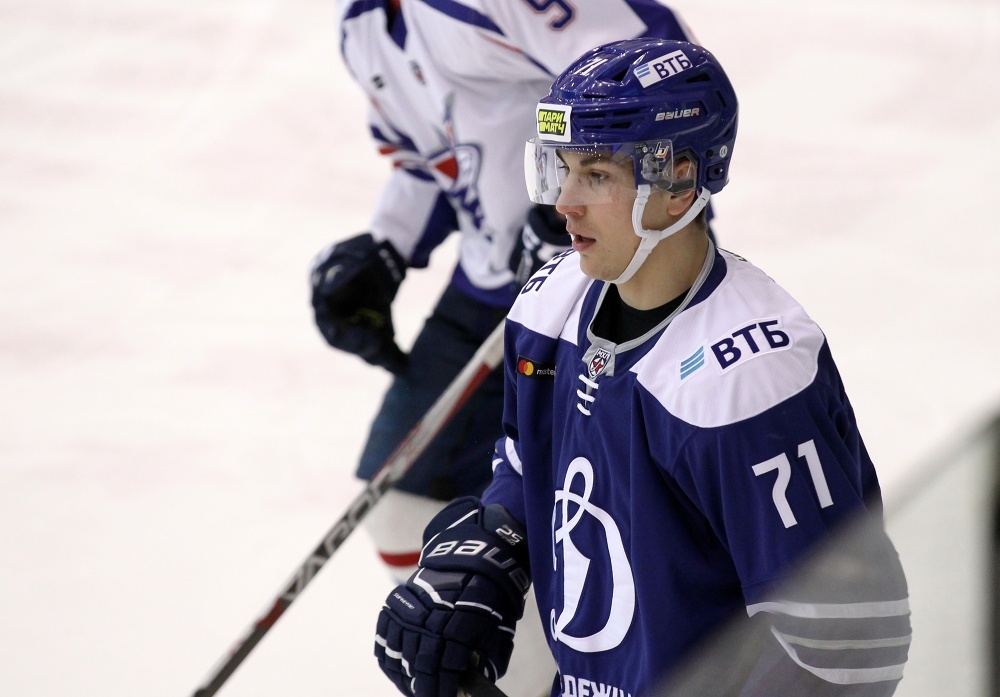 Interview
IVAN MURANOV: “PERHAPS, THERE’S GOING TO BE ANOTHER MURANOV IN JHL NEXT SEASON”
Share

In the past two seasons Dynamo Moscow forward Ivan Muranov played just six games in Junior Hockey League. Although, Muranov fit the age limit to play for the junior team, he spent most of his time in KHL. Of the six games he did play in JHL, two were in his grad year and Muranov helped Dynamo to achieve an important result as Moscow made Kharlamov Cup Playoffs for the first time in five years.

“WE MISSED THE PLAYOFFS WHILE COMING BACK FROM A ROAD TRIP” 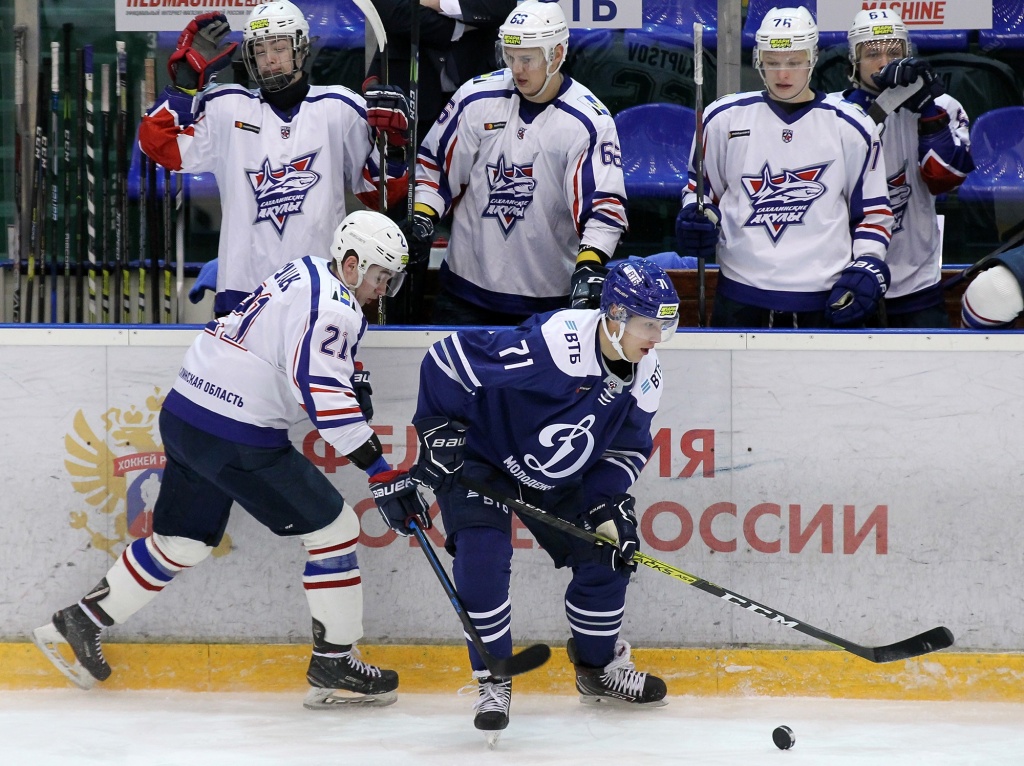 “I contributed very little to that success,” says Muranov. “I was sent down to juniors for just two games back in February during KHL pause for Eurohockeytour. Even though, I spent very little time in JHL this season, I’m very glad for the boys. They managed to end the sad streak for Dynamo and made the playoffs. It means a lot.

“I wouldn’t say that this year Dynamo had a better team than in the previous seasons,” continues Muranov. “Perhaps, the reason behind the success is that the team managed to keep its core. There were a few lines consisted of players, who had been with the team for a while and worked on their chemistry. Junior players used to get promoted more often within the club’s system. Top players were often called up to VHL and KHL teams.”

“We were the closest to making Kharlamov Cup Playoffs in the 2017-18 season,” reminisces Muranov. “Dynamo battled for the 8th spot in the West with Russkie Vityazi [Moscow Region] right till the very end of the regular season. In the last game of the regular season we lost in Yaroslavl to Loko, who topped the league at the time, and we needed Russkie Vityazi to lose in Riga to make the playoffs. They were down 1-0 almost the entire game and it seemed we would make the playoffs. On our way back to Moscow we were even given a schedule for the week – one day off and then another trip to Yaroslavl for opening round games. But Russkie Vityazi tied it up with six minutes remaining to play in regulation and then got in the lead. So while we were returning from the road trip, our schedule drastically changed. Instead of the playoffs, we got a vacation.”

However, Muranov says, he’s not frustrated about having no JHL playoff experience because he did play over a hundred games in the league – 103 to be exact – scoring 24 goals and notching 29 assists for a total of 53 points.

“Playing in JHL was a huge experience for me. I played often and a lot. I scored goals and even had a hat-trick once. Gaining experience and person growth mattered the most to me,” confides Muranov. “It really helps me in KHL these days. Vladimir Krikunov’s coaching staff trusts me with a lot of ice-time and it’s a huge experience for me as well. I have to give it all in 10 minutes. When I manage to achieve my goal in my shift to the maximum, the most important thing is to catch my breath on the bench afterwards.”

Although Muranov never competed in Kharlamov Cup Playoffs, he did win a trophy in Junior Hockey League. In 2018 Dynamo forward won JHL Challenge Cup as a member of Team West.

“I remember well that I played at the Challenge Cup literally a month after I swapped full-face mask for a visor,” shares Muranov. “And it was very unusual for me. Suddenly, I seemed to have so much room in front of me and so much more air to breath. It always seemed that the puck was going to hit me straight in the face!”.

“Challenge Cup took place at Dynamo Arena in Moscow this year,” adds Muranov. “I wasn’t in the stands but I watched the game on TV. It was a great game and a tough one, too. Team West scored a bunch in 2018 and that’s why it was tough for Team East to recover from that [Team West won 7-3]. This time around, though, it was a pretty tight game. It even took me by surprise a little. Players seemed ready to go in the boards head-first just to win the puck over! [Team East won the game 5-3].”

“THERE’S ALWAYS SOMETHING TO DISCUSS WITH YERYOMENKO. HIS SON PLAYS WITH MY BROTHER ON THE SAME TEAM” 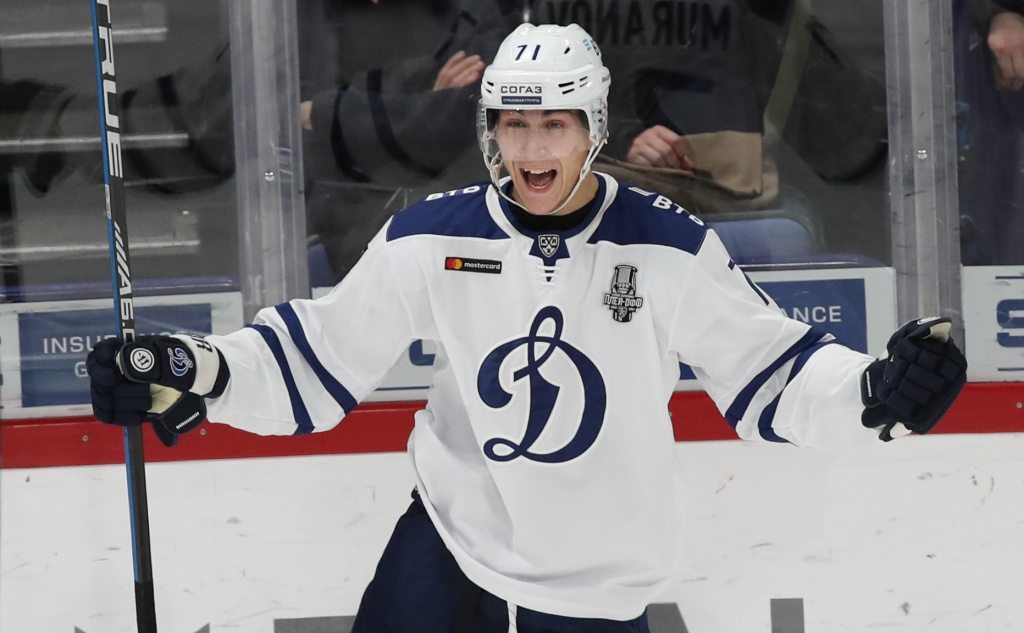 Muranov already has 78 KHL games under his belt with 2 goals and 3 assists for 5 points. He played with many famous and decorated men over the stretch.

“I’m on a first-name basis with everyone on the team,” says Muranov. “But I never forget about repect because there are a lot of experienced and famous players on Dynamo. Vadim Shipachyov is an Olympic champion. Maxim Afinogenov – a world champion! Everyone is pretty laidback. Everyone is ready to help. I learn so much from them at every practice.

“Although, I talk a little bit more to Uncle Sasha – Alexander Yeryomenko,” says Muranov with a smile. “He’s a true legend! He’s a very interesting person. It’s always exciting talking to him. We have something in common, too. His son plays on the same team with my brother. They’re both in Dynamo junior hockey school. Funnily, they’re both named Maxim. So we often talk about their games and sometimes hang out in the stands. We sit on the side where no one pays any attention to us so we wouldn’t get in anybody’s way. Although, people still recognize us every now and then. For example, after the 2019 World Juniors it became a more common occurrence for me.

“Interestingly enough, I played with several of my younger brother’s teammates this season,” continues Muranov. “He plays for the 2004 team but sometimes he was called up to older teams. And there was an entire group of players born in 2003 this year on our Junior Hockey League team so I got to know them. Perhaps, soon there’s going to be another Muranov in JHL – only this time it’s going to be Maxim. It’s going to be great if the coaches are going to give him a shot on the junior team this upcoming season. I’m going to cheer for him.”

The 2019-20 season ended sooner than expected for Ivan Muranov due to coronavirus pandemic. The forward helped Dynamo to eliminate rivals Spartak Moscow in the opening round of Gagarin Cup Playoffs but the post-season was cancelled after that. Thus Muranov participated in the last KHL game of the season.

“Nobody knew at the time that it was going to be the last game,” notes Muranov. “It was Game 6 of the series and we had to play in front of empty seats. That silence shattered the atmosphere so it was very difficult to bring out emotions. That’s why it was the toughest game of the whole series. Obviously, JHL games don’t draw huge crowds either but the fan-sector was always full at Dynamo games.

“Everyone on the team was given a leave so I practice at home. I jog, cycle, stretch and do situps. I’m also getting ready to go to the cottage. I have a net set up there so I will be able to come up with a better practice plan.”