KONSTANTIN SHOSTAK: “I’M NOT HARD ON MY TEAMMATES. THERE’S MORE OF THEM, IT CAN BACKFIRE” KONSTANTIN SHOSTAK: “I’M NOT HARD ON MY TEAMMATES. THERE’S MORE OF THEM, IT CAN BACKFIRE”

Belarus goaltender moved to Russia at the age of 16. After graduating from Yunost Minsk junior hockey school Konstantin Shostak was invited to Vityaz Moscow Region system. However, he played for the club only at youth level.

“I practiced with Podolsk JHL team but didn’t get to play for Russkie Vityazi in the end,” reminisces Shostak. “At a certain point Almaz invited me for a try-out. After that I decided to stay in Cherepovets. It’s just that I liked here everything better than at Vityaz. Today I understand how lucky I was to have found the right people and to have worked with such a great coaching staff.”

In three years he spent with Severstal, Shostak made it all the way to the top in club vertical. In the 2019-20 season the goaltender played not just for the junior team but made his debut in VHL and KHL. He played his first game for Severstal against SKA St. Petersburg. Shostak kept clean sheet for two periods but then allowed as many as four goals in the third and Severstal blew a 3-goal lead. 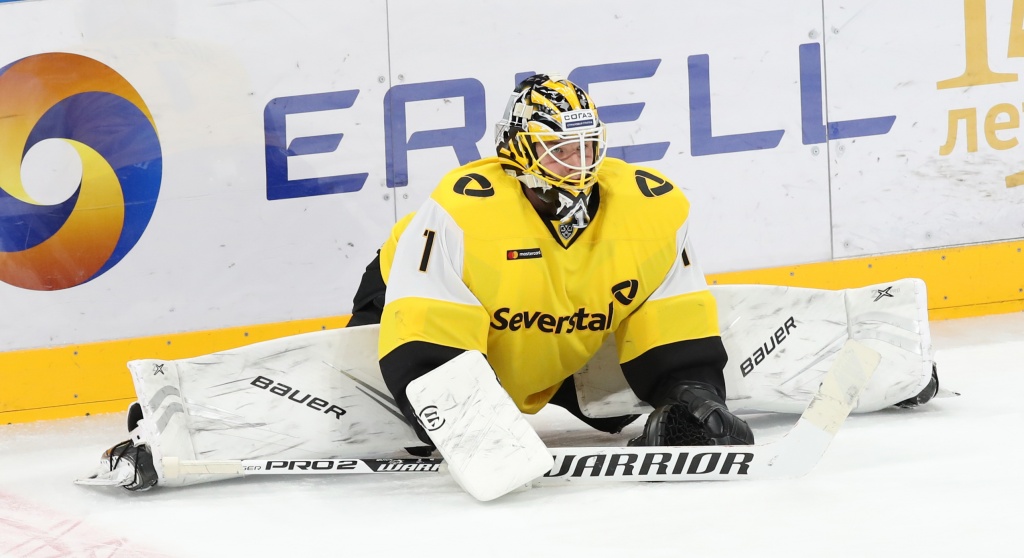 “A nightmare? Obviously not but it was frustrating. It’s a learning experience,” explains Shostak. “I have had a fair share of frustrating losses over the course of my career. For example, last season in Kharlamov Cup quarterfinals we lost two games to SKA-1946 in the shootout. Who knows how the series would pan out had we won even one of those games! It was probably after that failure that I decided to improve my shootout game. This season I did well at shootout in VHL and in exhibition games with Severstal. That’s how I learned from my mistakes.”

There were also plenty wins in Shostak’s career and the most memorable ones were in the opening round Kharlamov Cup series in 2019 against Krasnaya Armiya Moscow.

“It was the greatest moment of the three years that I spent in Junior Hockey League. I definitely won’t forget the series against the ‘army men’ for a long time,” believes Shostak. “And it’s not just one game that stands out, it’s the whole series. We got off the wrong foot in the playoffs. We lost two games in Moscow and were just one loss away from being eliminated. But then we pulled ourselves together, tied the series and then went on to win it. Game 5 in Moscow was very intense but we managed to win it!”. 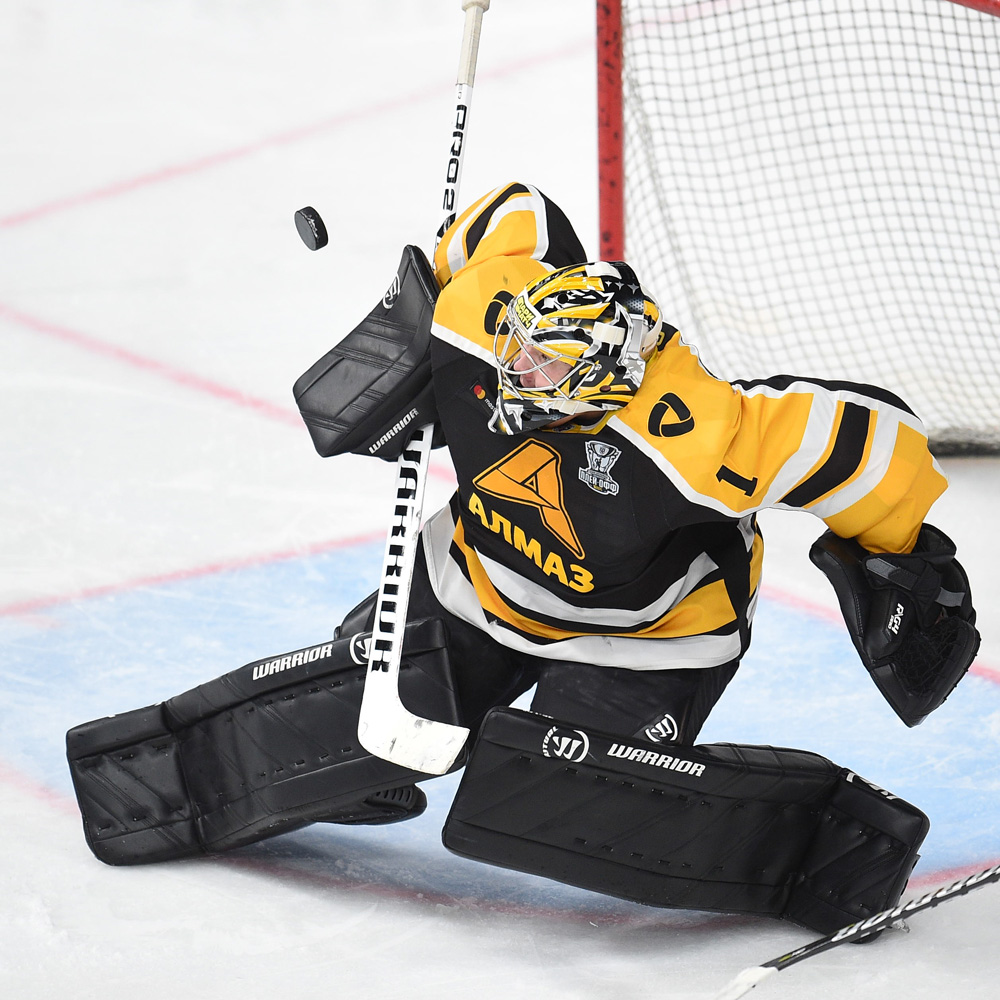 This season Konstantin Shostak put on display not just his solid play and multiple saves but also several broken sticks. We asked Shostak to count how many sticks he had broken.

“Overall, I must have broken about three or four during games. But that’s excluding the ones I broke at practices!”, says the goaltender. “It may seem that I do it out of anger but that’s not the case. As the matter of fact, I’m not emotional and those cases are rather exceptions than a rule. It’s something that needs to be done sometimes.

“But I’m not emotional during games. I’m not even hard on my teammates! I mean, what good it would do. There’s more of them, it can backfire,” says Shostak with a laugh. “Obviously, I can give advice to my teammates sometimes but without yelling or getting anxious. We have a great group of guys on Almaz. So everyone understands one another without having to raise the voice.”

“IT WAS FRUSTRATING TO SEE THE WORLD CHAMPIONSHIP CANCELLED. I DREAMED OF PLAYING IN SWITZERLAND”

Shostak’s journey to Junior Hockey League ended with a loss to JHC Dynamo St. Petersburg in the opening round of Kharlamov Cup playoffs. However, after Almaz got eliminated he continued his season at Team Belarus camp.

“After the series against Dynamo came to an end, Almaz coaching staff let everyone go home, so I went straight to Minsk to join Team Belarus,” says Shostak. “Due to coronavirus pandemic, hockey league around the world were gradually being shutdown and at a certain point we ended up being almost the only hockey team to still have practices. There was a lot of buzz around our team in Belarus, there were a lot of reporters and a lot of talk about us. I even got messages from my friends in Russia. They wanted to know about our practices and how were things with Team Belarus.

“Incidentally, when I just reported to the camp in Belarus, Superleague playoffs were still going on. Since there were no other games, I watched the final series on TV. I even watched one game from the stands. Yunost play their home games in Minsk at the same rink where Team Belarus practices so I just stayed after a practice to watch the game.

“I also went to my brother’s games. This season his team won the gold medals in Vysschaya Liga. We’re both in Minsk right now but we almost never see each other. He still practices and lives with the team.”

Another JHL player was at the camp with Shostak – SKA-1946 forward Artyom Zhuk. Notably, the two played a year ago for different nations at the Black Sea Cup. Back then Zhuk played for one of Team Russia squads. 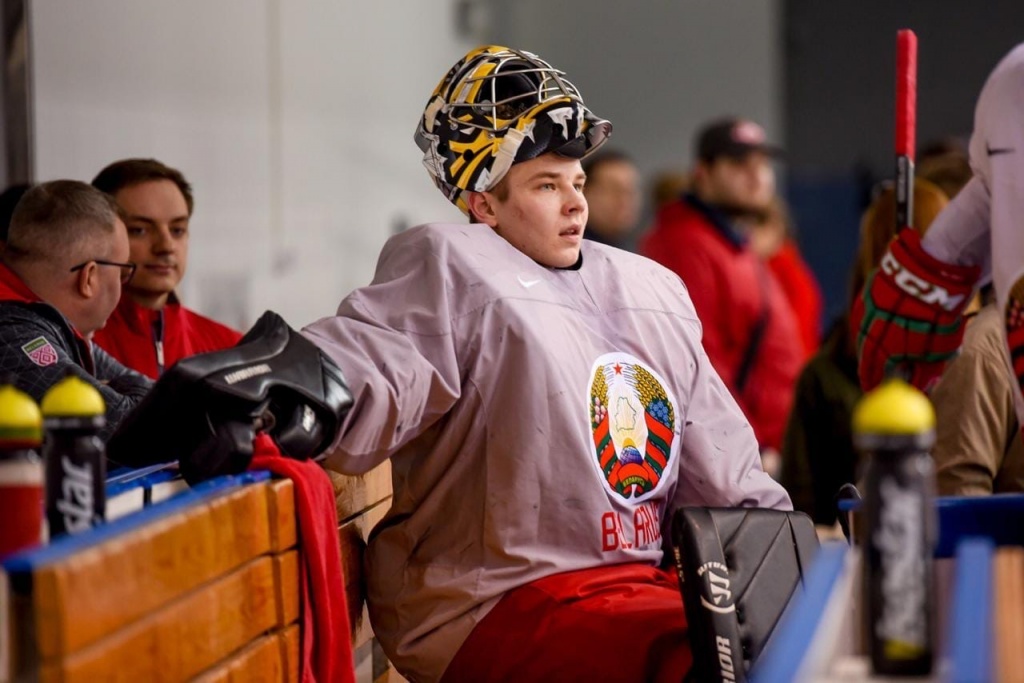 “I have known Zhuk since we were kids. We began practicing together at a Minsk junior hockey school,” says Shostak. “He called me and said that he was going to be at the camp. While I had played a few games for Team Belarus this season, that was his first call-up to the team. But he’s also from Minsk so he didn’t need my help to adjust. He quickly got himself acquainted with everyone and befriended them. Obviously, we talked a little about playing against one another not only on international level but in JHL as well.”

At the time Team Belarus was getting ready for the upcoming world championship in Switzerland but IIHF cancelled the tournament in the end.

“A chance of making the cut for a world championship team was a great motivation for me personally,” notes Shostak. “Coaching staff said that they relied on me, that I had to keep working hard and wait for my chance. Obviously, I dreamed of playing in Switzerland and it was really frustrating to see the tournament cancelled in the end. But it didn’t come as a shock. It was gradually getting towards that. We kept working but the thought of potential cancellation was, certainly, in the back of our heads. Nevertheless, I’m calm. I still have several world championships, where I would be able to compete, ahead of me. So I just have to keep my head down and keep working hard.”

Team Belarus has a qualification tournament for the 2022 Olympics in China on their schedule. Belarus will face Poland, Slovakia and Austria. The team continues to prepare for the games, which are scheduled to take place in late August, albeit players have to do it individually. For safety reasons, Team Belarus players were quarantined.

“Everyone knows about the situation world-wide so we were extra cautious at the camp,” says Shostak. “Team doctor checked on us and every player travelled only between practice facility and home. The whole rink was equipped with antiseptics and we only greeted one another with fist-bumps.”