GLEB KONYUKHOV: “I WORK HARD SO I COULD TRAVEL TO SUPPORT RIGA COME THE FALL” 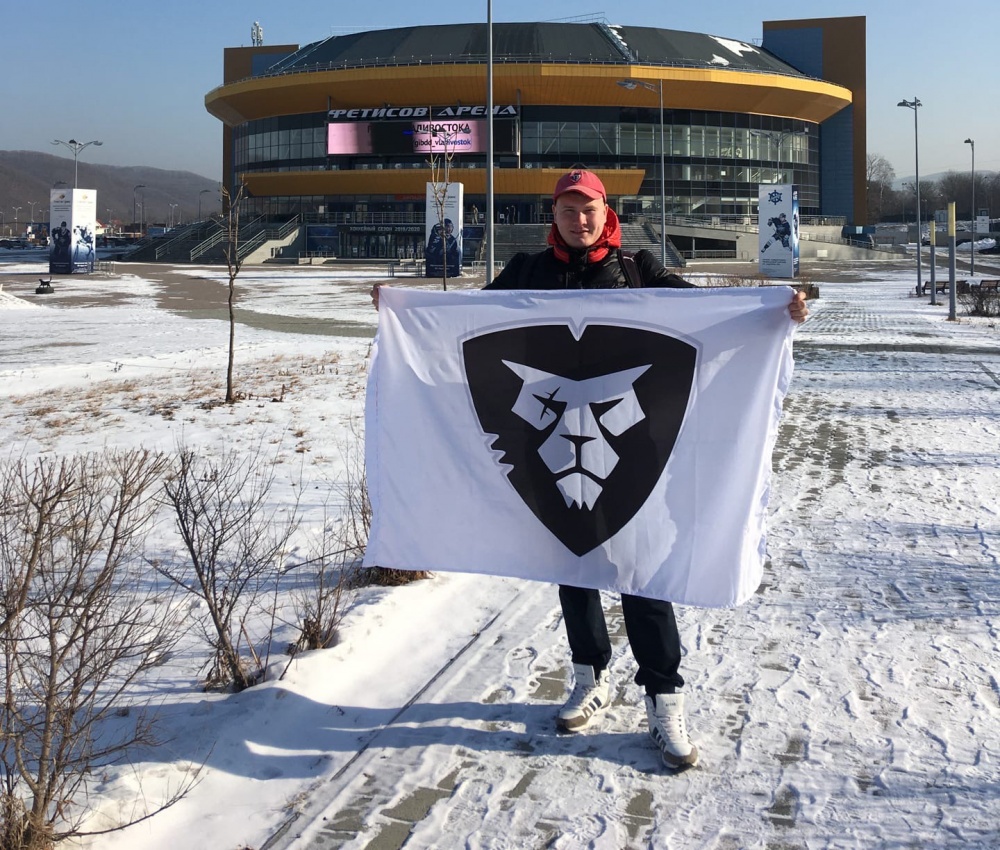 GLEB KONYUKHOV: “I WORK HARD SO I COULD TRAVEL TO SUPPORT RIGA COME THE FALL”
Share

Junior Hockey League continues Fan Story series. Today we’re going to talk to Gleb Konyukhov, a die-hard HK Riga fan from Khabarovsk. Gleb shared why he decided to support the Latvian team, how the coach of his favorite team made his dream come true and what gift he offered to forward Ralfs Vaters. Konyukhov spoke about that and much else in this interview to Junior Hockey League media relations.

I first came to a junior hockey game in 2011. I saw an ad on TV. Local Amurskie Tigry were going to face Loko Yaroslavl. I decided to go there and see it’s about. Frankly, I don’t remember the final score of the game. I really got into hockey when HK Riga came to Khabarovsk. It was on February 23rd, 2016. That was the moment when I started going to the games regularly. The ‘Tigers’ won that game 3-0. I decided to support the visitors in that game. The players thanked me in the intermissions and after that game. They even gave me a game-used puck after it. To be honest with you, the visitors were more thankful than the home team in all of the times combined that I came to the rink. I was always grateful to Riga for their feedback. I was really happy! Since then I decided to support Riga forever. Next time when the boys came to Khabarovsk on January 31st, 2017, I was ready. By then I had bought the flag of Latvian Republic. I grabbed it and went to the game to support the team. There was no scoring in the first period. We fell apart in the first half of the second frame and by the end of it were losing 2-0. I saw Riga’s first goal with my own eyes only early in the third period. Alas, we lost the game 5-1 but I was ecstatic because I had the chance to come to the game of my favorite team. 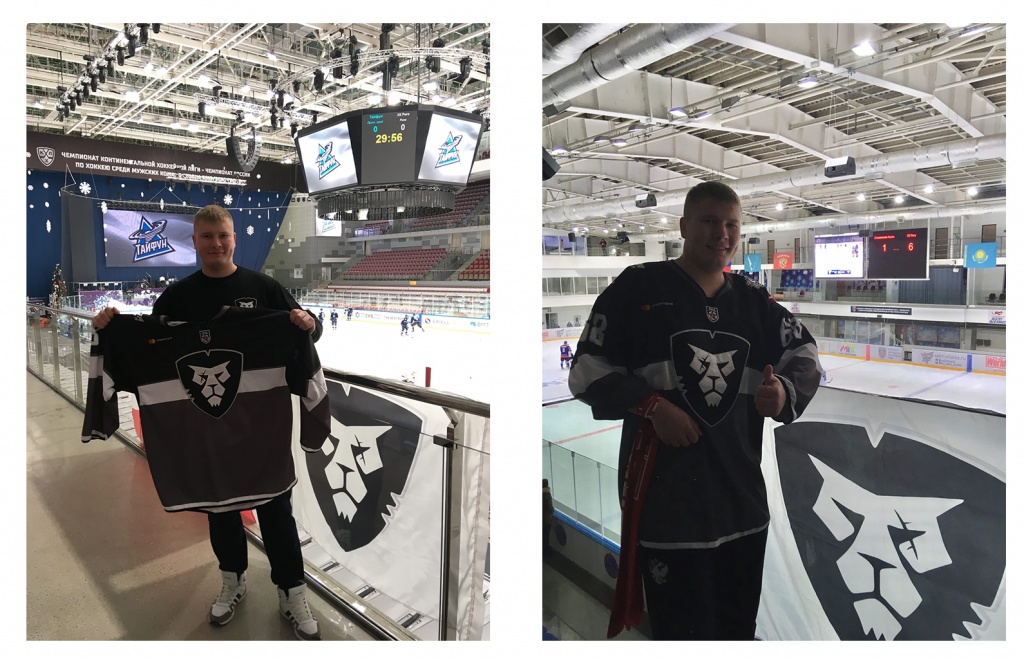 I went to Vladivostok to support the boys. It wasn’t that long ago. It was in February 2019. Later in November I travelled to St. Petersburg to support the boys in four games. In early 2020 I went to Vladivostok once again and later on to Yuzhno-Sakhalinsk. Here’s what my first road trip was like. I was eagerly awaiting that trip. I booked a hotel, bought train tickets and went to Russian Far East’s capital. Alas, our team lost its first game to local Taifun by a blowout – 8-3. The second game was more even but we still lost it 4-2. The results, obviously, affected my mood but the thought that I was supporting the boys in a foreign town for them and they knew it made me happy. How many road trips I have under my belt? If you count Riga’s games in Khabarovsk, which are away games for the team, I went to about six road trip to support my favorite team.

The team has a fan-sector but those guys live in Latvia and support their team in their homeland. They’re often shown in broadcasts so it’s easy to spot them. I’m not acquainted with them and I have never talked to them. I go to the games with my girlfriend. That’s all there is of our fan-sector. Although, I chant so hard that sometimes I outchant home team fan-sectors. My girlfriend, on the contrary, is much more modest. Besides, those guys who support their team in their homeland probably have certain traditions or rules. My rules are as follows – be with the team regardless of anything. You can get mad because of the outcome or a certain mistake, but it’s all just spontaneous and goes away swiftly. After that you have to be able to support the team and back them up. Have I ever given gifts to players? In 2017 I presented forward Ralfs Vaters with a jersey of our local soccer team.

Second game of the back-to-back away series in November 2019 against SKA-Varyagi was very memorable for me. Why that specific game? We were down 2-0 but tied it up by the end of the first period. There was no scoring in the following two periods. Then came the overtime. With 22 seconds till its end, when a lot of players were getting ready for the shootout already, Antokha Sinegubovs scored the winner. It was unbelievably emotional. We were down, came back and won late in overtime. It happened just as it should! After the game I met with the team and coaching staff. We talked a little, took a few pictures and bid our goodbyes. The boys went back to Riga and I flew back to Khabarovsk. 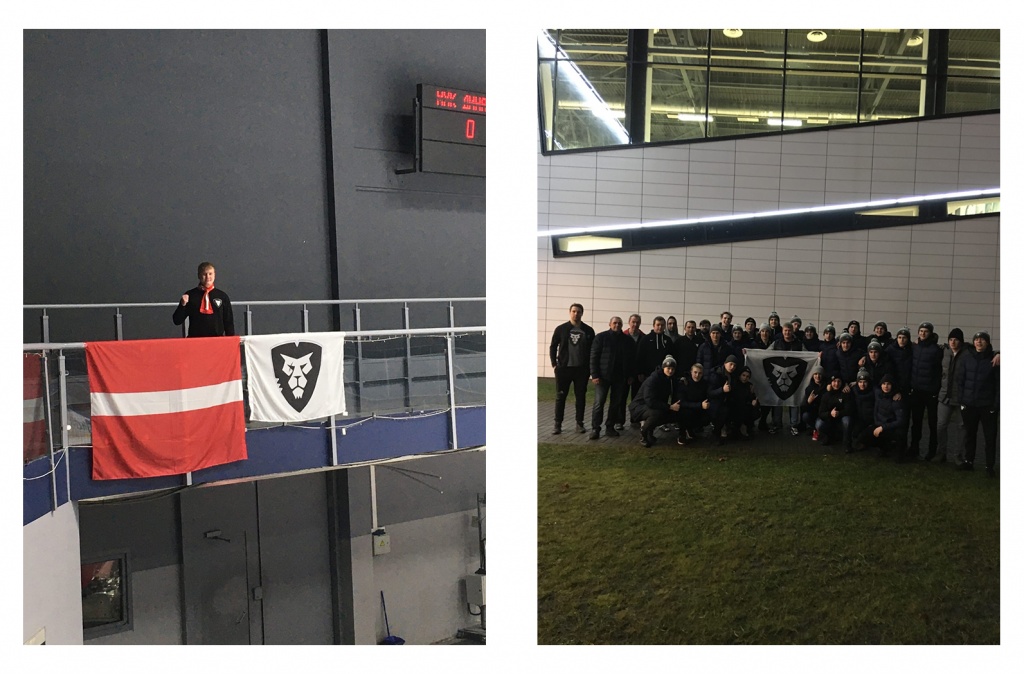 I will never forget the time when…

Nikolai Zhukov, goaltending coach, made my dream come true at an away series against Taifun. He gave me the game-used jersey of the team. Since then I support the boys only in it. It doesn’t matter what I do – watching the game online or supporting the team from the stands.

Three qualities of a true fan

I consider myself a true fan of my team because:

- I fell in love with the team to the point of tattooing its logo on my left arm. Yes, indeed. Things like that happen (laughs).
- I wake up at night to turn on my laptop and support the boys for four years.
- I work really hard these days so I could once again travel far away from home and support the boys. I just can’t live without it anymore.

First of all, I would like to say to the boys that they need to take care of themselves, their health and avoid injuries. Don’t forget you need to battle for the republic, for the name on the back of your jerseys, for your family and loved ones! Stay true to the game on the whole and remember that somewhere at the other end of the Earth, there is a person, who may be a bit crazy, but who loves you very much and who will always sincerely support you with all his heart. He will be behind you all the time, he’s going to love you and believe in you no matter what happens!