YELENA PETROSYAN: “IT’S IMPOSSIBLE TO HOLD TEARS WHEN YOUR SON IS THE TOP-SCORER” Altai
News
“I am of the same “slow ship” style as my father.” Maxim Mayorov – about moving to Yaroslavl, national team debut and passion for tennis
“I bought a cake and gave flowers to my mom with my first paycheck.” Yaroslav Tsulygin – about his JHL debut with Tolpar
Was signed up for hockey at the age of three, was dressed as a goalie in an extreme situation and looks up to Datsyuk: take a closer look at the leader of Irbis and the hope of Ak Bars
Edgar Varagyan: “When we were on the plane, guys told me: “He is an enforcer, he would beat you up with no sweat.” I thought: things happen, he would beat me up and so what?”
“As time goes by, taking a flight to Sakhalin feels almost like being stuck in Moscow traffic.” Daniil Veremeichik – the JHL's Best Player on Social Media
“Working out in a gym is a type of rest for me.” Ivan Murashov had the best season of his career, dreams of playing in the KHL and has not eaten any fast food for two years
“Condensed milk is the only unhealthy food available for the national team.” Raul Yakupov – about the Black Sea Cup, the KHL debut and the season with Reaktor
“Four years in the JHL was a great time. Winning the Cup with Dynamo was the best moment.” Ivan Didkovsky about junior phase of his career
Share

YELENA PETROSYAN: “IT’S IMPOSSIBLE TO HOLD TEARS WHEN YOUR SON IS THE TOP-SCORER”

Junior Hockey League continues the Family Portrait series. Today we’re going to sit down with Akop and Yelena – parents of Parimatch Junior Hockey League regular season top-scorer Stas Petrosyan of Altay Ust-Kamenogorsk. They shared how their son fell in love with hockey, who he dedicates his goals to on his birthday and also spoke about their emotions at the JHL Challenge Cup in Moscow.

Akop: I have always been fond of sports, especially hockey. I’ve always supported Severstal Cherepovets, gone to the games and led a healthy lifestyle. I continue to do all of the above to this day.

Yelena: We would take our whole family to Severstal games. That’s why I’m close to the sport and I understand much about it.

How it all began

Akop: When Stas was three years old, he began going to the rink with me to watch the games. He would watch what was happening on the ice without blinking and that’s how his love for hockey started. When he was about six we knew it was time to sign him up for a sport. We asked our son what sports he wanted to be in and he said with no hesitation, ‘Only hockey!’.

Yelena: Actually, [Stas] and his dad were choosing between hockey and soccer. My son opted for the former. Stas has been an active guy ever since he was a kid. All of his kindergarten teachers used to say that we needed to sign him up for sports to channel his energy. That’s when we finally decided to sign him up for a hockey school.

Yelena: We signed up Stas for a hockey school when he was six and a half years old. Everyone in his group started when they were six, while he joined them a bit later and yet managed to do better than anybody.

Akop: I took my son to his first practice. The coach, Sergei Yurievich Solovyov, gave Stas a chair and showed him what to do. My son skated with the chair for about a week, got rid of it and began skating himself.

Yelena: Who helped him in the dressing-room? My husband. Many other boys asked him to help them with the laces, too. So he would help everybody, not just Stas. Akop would also follow him to the tournaments. The team would travel on a bus and he would drive after them. Why did my son become a forward? To be honest with you, initially he wanted to be a goaltender but the coach talked him out of it. He said that Stas had good hands and he should be a forward. 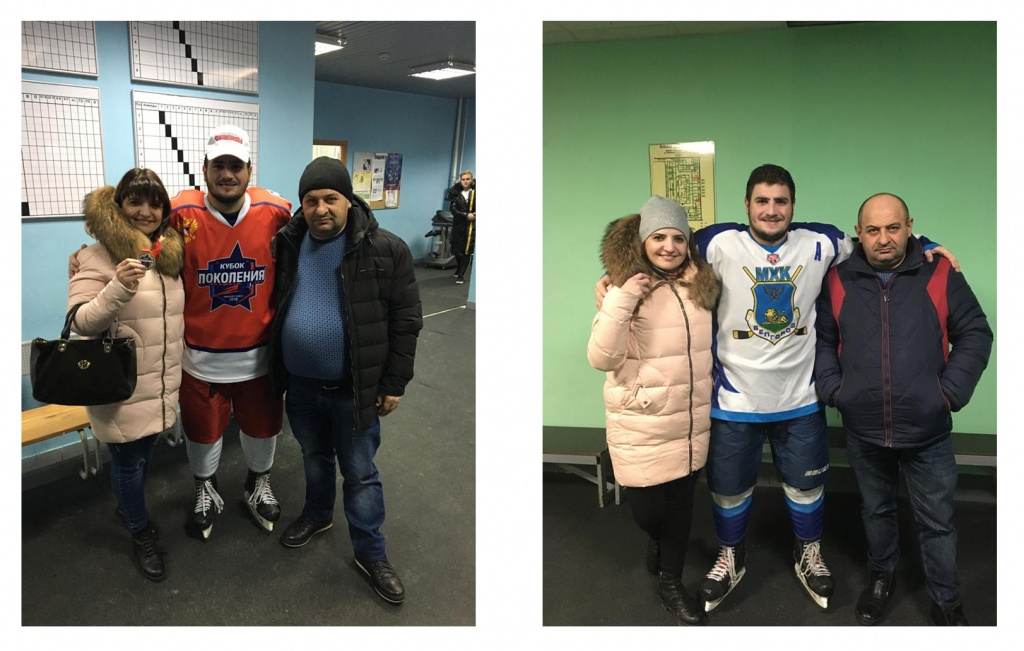 Akop: His very first tournament was held in Nizhny Novgorod Region in a town of Zavolzhie. I went there with him for support. If I’m not mistaken, the team finished third at the tournament. I remember I was very worried about how it would go.

Yelena: You know when you get excited? When after a tournament your son is announced as its top-scorer. It’s impossible to hold back tears in such moments because of pride and realization of how much he went through to achieve such success.

Аkop: Another tournament, which I remember well, was held in Dmitrov about six or seven years ago. The team finished first there and my son was named the top forward. It’s a moment I will remember for the rest of my life.

Yelena: Stas usually discusses with me all the routine chores. I always call him because I can’t live without hearing his voice. As for hockey, Stas’ dad is his biggest critic. He always finds something to say and something he should focus on.

Akop: I always give him advice and point out his shortcomings. At the same time, I don’t call myself a coach. It’s just that I understand a few things about the sport. Sometimes I’m worried that after hearing my advice he would tell me, “Put your skates on and show me how it’s done!” (laughs). What do we tell our son when he hits a slump? We tell him exactly what his coaches tell him, ‘It’s nothing to worry about, calm down and get ready for the next game.”

Yelena: As for psychological moments, it’s usually me who talks to Stas and I can do it for a long time. I can go to church, place a candle for his luck and ask my son to do the same. I also always message Stas everywhere I possibly can, telling him he’s doing a great job and that I’m proud of him.

Akop: As for praising, I do my best not to overdo it. It’s usually his mother who does it. I tell him, ‘Never dwell on your past achievements and keep moving forward!’

Yelena: Do we come to his games? Of course. This season we decided to surprise him on his birthday and travelled to Kazakhstan. Our son was shocked because at first we told him we couldn’t come because his dad was too busy. They played against Kuznetskie Medvedi that day and Stas scored a hat-trick. After each goal he scored he would skate to centerice and blow me a kiss. After that game he got a call from a coach he knows who asked him, ‘Stas, did you get a girlfriend in Ust-Kamenogorsk? Who did you blow kisses to?’. We were also in Moscow for the Challenge Cup. Half of the stands were filled with Stas’ relatives. Everyone was cheering for him! And it was a very exciting game, too. We spent the night before it drawing banners in support of Team East. We truly enjoyed everything. 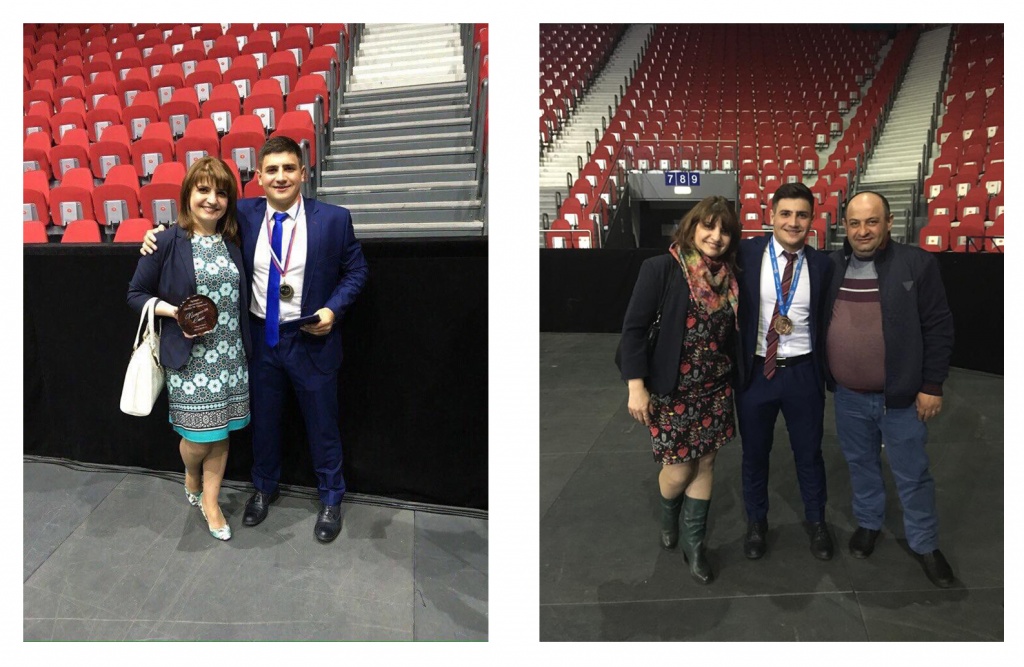 Yelena: At first we didn’t think that our son would live so far away from us. Personally, I still can’t get used to it. It’s very difficult for me. I want him to be always by my side. But we realize that if he’s going to be with us, there will be no place for sports in his life. We have to choose either to have him by our side or him being in sports. We choose the latter.

Akop: I’m rather positive on this. He can sustain himself. What difference does it make where he lives. He’s a man and that means he must prove it.

Sonny, do your best to avoid injuries, that’s the most important thing. Move forward towards your goal. You have wanted to be a famous hockey player every since you were a kid. Let you dream be fulfilled! And ours as well!
Share