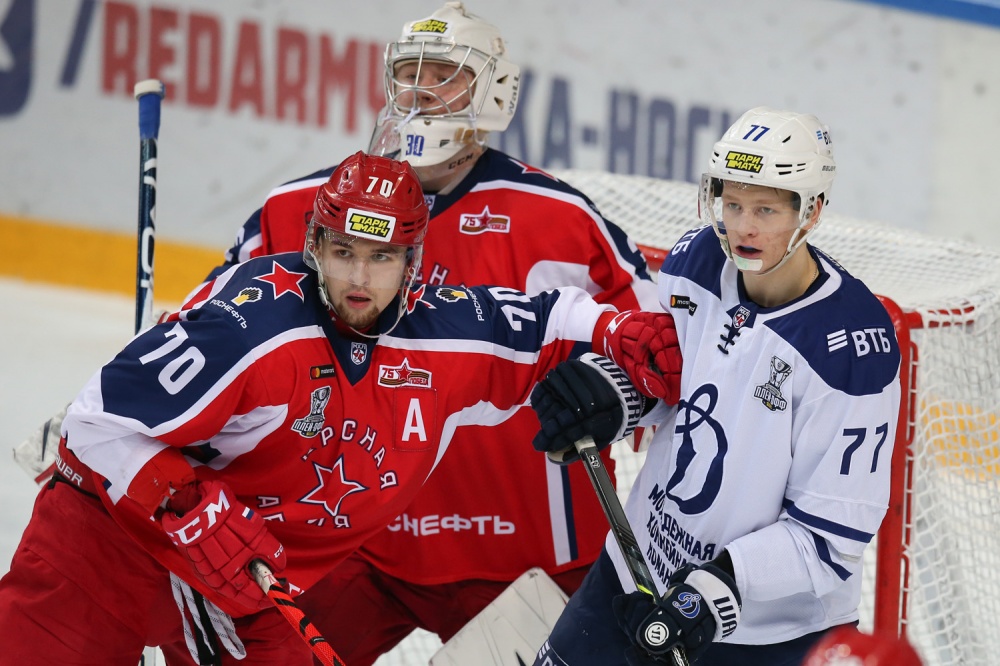 Players weighed in on the series.

“The series turned out to be low-scoring. Obviously, goaltending played a part in it but the main reason behind it was that both our players and Krasnaya Armiya players did their best to play with caution on defense and made minimum mistakes. That was the key factor.”

- You averaged between 40 and 50 shots per game.
- Goaltenders gradually make progress in such games when they face a lot of scoring chances, when they’re constantly on their toes and stop a lot of shots. Such practice is a great experience.

- Last game of the series lasted for 98 minutes and 31 seconds. How tough was it playing five period with no room for mistake?
- It was an unusual experience. Because we had played a full game the day before and after a short little while we had to play as many as five periods. I can’t say that it was tough for me physically. I felt a little mental pressure because I had to stay focused the whole time. 60 regular season games make you feel adjusted for 60-minute games and then I had to play two extra periods on top of that. Besides, we played with no room for mistakes. Although, I wasn’t thinking about that at the time. Only after the game did I realize that the season ended. I felt a bit queasy.

- Krasnaya Armiya’s deciding goal was a bit of a fluke.
- Yegor Kuzminov broke away and took a shot. The puck was right under me. Defensemen didn’t see it but the opponents somehow managed to shove it into the net. Such fluke goals often happen in the playoffs. Besides, we played almost 100 minutes. Both myself and my teammates were a bit dazed and that’s why we didn’t do well in the episode.

- Game officials took a while to confirm the goal.
- At the time I was hoping for the best. I didn’t see the puck going in at all. Only later in the dressing-room I got to see the video and figured it out. It was frustrating but there was nothing we could do. Only one team proceeds to the next round.

- It was the first playoffs of your career.
- You have to pay for mistakes instantaneously in the playoffs. The price of mistake goes up. So I treated the games of the series more seriously and was more thorough in my preparation. For instance, I would go to bed earlier so I would gather more energy. The game went back-to-back so every player had to be smart about burning energy. I’m certain that it was a great experience for every Dynamo player and it will help us in our future careers.

- You are a CSKA Moscow junior hockey school alumnus and were with Krasnaya Armiya in the beginning of the 2018-19 season.
- It was a special series for me. There are a lot of guys on Krasnaya Armiya that I know. I have a lot of friends on the team. I graduated from junior hockey school with a lot of them the same year. After the series I spoke a little, for instance, with Danila Khulapov and Seva Skotnikov. Although, it was very emotional. They were happy, while I, on the contrary, was frustrated so I just said a couple of words. I congratulated them on making it to the next round and then we reminisced a bit about past years. 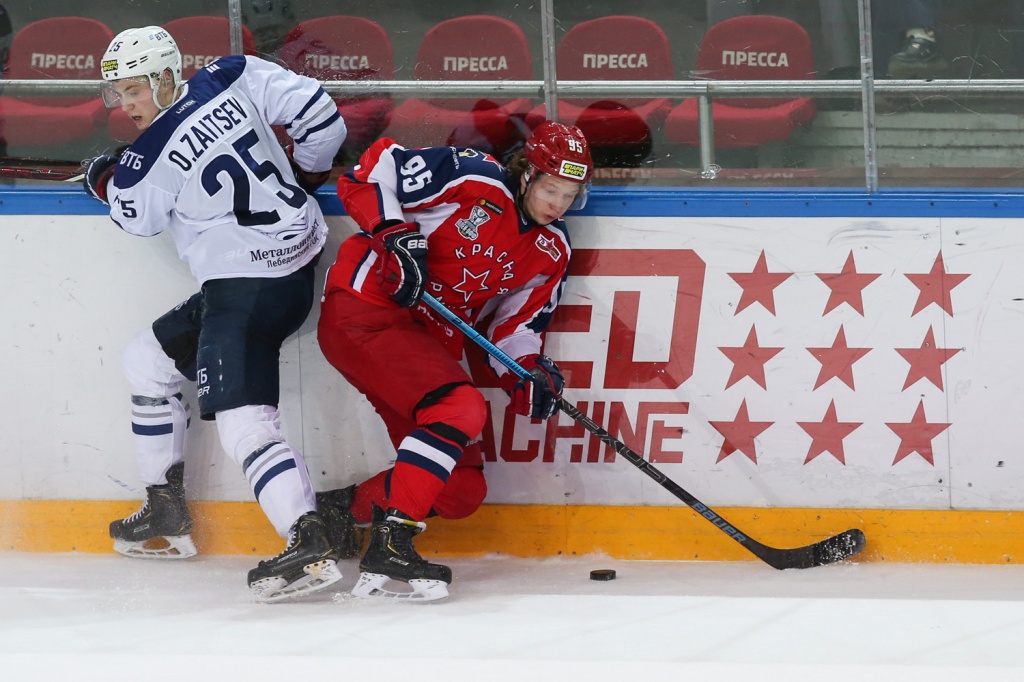 “Emotions from the Moscow rivalry were in the background. First of all, I was thinking about the opening round of the playoffs and that we had to proceed to the next round,” said Korbit. “It turned out to be a tight series. The teams knew each other well. We just managed to win the most important games in Tver.”

- What was the key to winning both games on the road?
- I think, winning Game 3 was the reason behind it. Game 4 was a bit easier for us than for Dynamo because we had a certain safety net. But we still were looking for a win. We wanted to go home in good mood and get more time to rest because our next opponent was Loko Yaroslavl. I think, the battle between the two most decorated teams in the league is going to be sublime, if the tournament goes on.

- How does it feel to play 98 minutes in the last game of the series?
- To play for such a long time is an interesting experience. I think, every player dreams of such an experiment. We rested as usual in the intermissions. There was no special approach. The moment when I scored the goal nobody understood anything. Because we shoved the puck in and then there was a video review. I can’t say that the officials spoiled our celebration with the video review. It wasn’t anything like that. We were still very happy but not ecstatic. After all, our goal wasn’t to go past the opening round but achieve something much greater than that. During the video review our coaches were telling us not to relax and be ready to keep playing. But Yegor Kuzminov said that he didn’t anything illegal so we were almost certain that it would count in the end.

- How did the team find out about the season being put on hold?
- We were informed at a team meeting that Junior Hockey League was on pause. We didn’t know how to feel about it. On one hand, the season was going smoothly and then it abruptly stopped. It’s difficult to practice when hockey was paused around the world. It’s very difficult to stay focused on the upcoming games when you can’t say for certain if the season is going to continue or not.

I’m not bored during the pause. I don’t like fiddling with my phone or laptop the whole day through. I prefer to stay active on my days off. I went home to Chekhov and my buddies and I played soccer outside the whole time. I have a lot of hobbies. For example, my father is a boxing coach so we practice with him every now and then. We often talk about boxing. Also, sometimes I play guitar. I like playing it sometimes. I can even dance a little.

“Both teams were very disciplined on defense. Everyone understood that every goal meant a lot so we played with maximum focus,” said Koreshkov. “Besides, both goaltenders were making amazing saves time and again. Vadim Zherenko stopped 30-40 shots per game. Although, we didn’t take many dangerous shots. We often took shots that were easy for the goaltender.”

- Many Krasnaya Armiya players competed in Kharlamov Cup Playoffs last season, while it was the first such experience for Dynamo players. Was that a factor?
- Last year Krasnaya Armiya had a tough series against Almaz [Cherepovets]. Back then we lost the series, blowing a 2-0 lead. We learned our lesson. Even though, this series followed a different scenario we knew for certain that we couldn’t relax regardless of any score. After losing Game 2 were scolded by our coaches for poor effort because we got a little over our heads after winning Game 1. After the serious conversation we packed up and went to Tver to finish off the series there.

- What was the key game of the series?
- Probably, the final game. Regardless of score, such games in the playoffs with long overtimes are very important. A loss in such game devastates the team. Had Dynamo scored then, who knows how it would pan out in Game 5.

- How did you pull through the game that lasted 98 minutes?
- We had a good pre-season. Besides, we knew that there was no reason to conserve energy. I think, if we had to we could have kept playing. It was a new experience for me but I was ready for it physically. It was important to deal with it mentally. We had to realize that every mistake could be the last. After the game we just rested for about half an hour. We gave up a lot of emotions and energy so we just wanted to cool down a bit.