SKA-1946
News
Edgar Varagyan: “When we were on the plane, guys told me: “He is an enforcer, he would beat you up with no sweat.” I thought: things happen, he would beat me up and so what?”
“As time goes by, taking a flight to Sakhalin feels almost like being stuck in Moscow traffic.” Daniil Veremeichik – the JHL's Best Player on Social Media
“Working out in a gym is a type of rest for me.” Ivan Murashov had the best season of his career, dreams of playing in the KHL and has not eaten any fast food for two years
“Condensed milk is the only unhealthy food available for the national team.” Raul Yakupov – about the Black Sea Cup, the KHL debut and the season with Reaktor
“Four years in the JHL was a great time. Winning the Cup with Dynamo was the best moment.” Ivan Didkovsky about junior phase of his career
Metsola-type player of Krasnaya Armiya, Peksa’s progress and solid Gromovik. Dream team goalies
Arseny Gritsyuk is the top rookie of the KHL season
A bronze medal with Irbis, VHL appearances and the first goal for Ak Bars. An eventful season for 19-year-old Dmitry Katelevsky
Share

Players and coaches weighed in on the series. 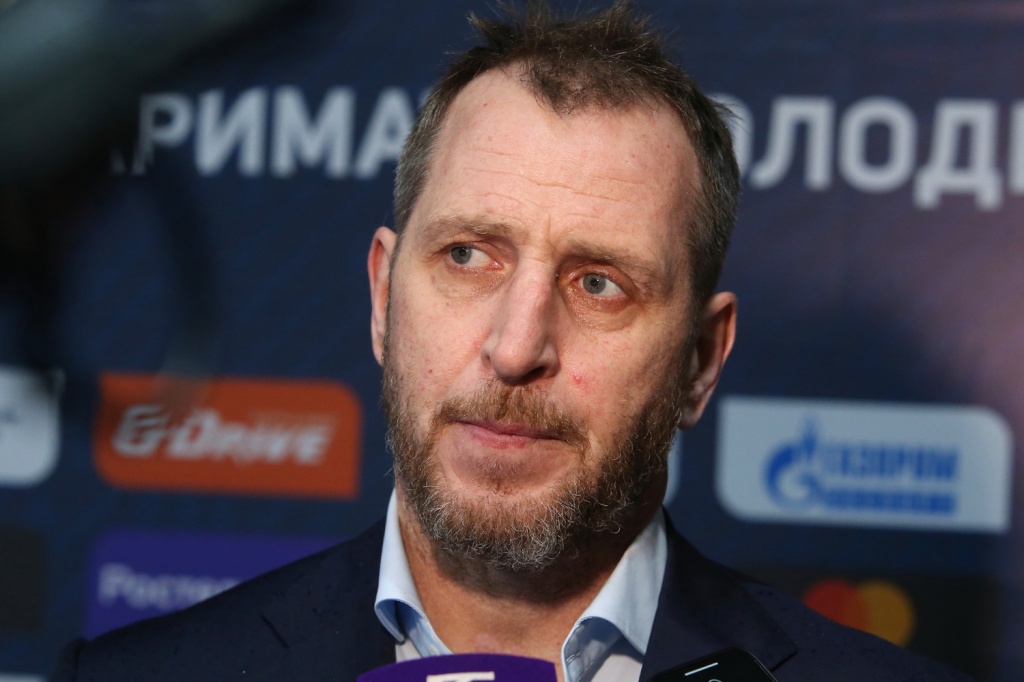 “Playoffs is a special competition, in which the teams go into every game with double determination,” said Berdichevsky. “We played well defensively throughout the series but in the first couple of games couldn’t capitalize on our scoring chances. I’m glad that we proceed to the next round. I’m satisfied with the way my team performed.”

- What happened after the loss in Game 2?
- We had the momentum on our side in Game 2 but lost. It happens sometimes. We didn’t change a thing but focused on discipline. We couldn’t afford taking silly penalties! First of all, I told the boys that we needed to eliminate the things that were in our way to winning. I did my best not to over-pump the players. On the contrary, I tried to support them. We had a good dialogue going on. Everyone made the right adjustments and I can’t say anything bad about our discipline in the final two games of the series.

First two games were just overemotional. There were a lot of fans, it was a great ambience and for many of our players it was their first career playoff run. We played with caution in the second half of the series, converted well on our power play attempts and capitalized on our chances. It was important to score first. It gave the boys the energy.

- What was the key moment of the series?
- In such an intense series, when it was a tie after two games, Game 3 is the key one. We had a psychological barrier. For two games in a row we couldn’t score more than a goal. In Game 3 we felt that we could score more and that we could play with confidence against the team and get the result we wanted.

- Several U18 Team Russia players joined your team mid-series.
- After it was announced that the 2020 U18 IIHF World Championship was cancelled, Team Russia players returned to our team, which also helped us move forward. They didn’t practice at all. Their camp was supposed to last a month but they didn’t even get to start preparing for it. So they had to play as they were. That’s why we didn’t put all of Team Russia players on the roster, but only those that we needed the most. Goaltender Yaroslav Askarov hadn’t played for a while so he had to practice with us first, regain form and get game-ready. We’re going to work with all of our players before the next series and see how ready there are. 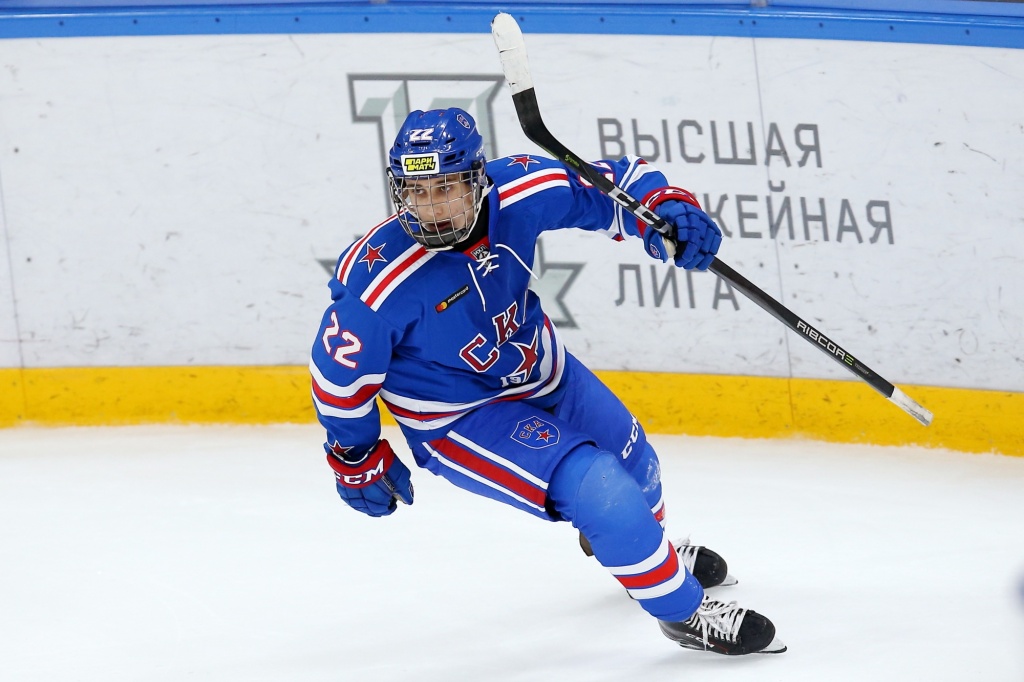 “Before leaving for Team Russia’s camp, I was getting ready for the playoffs with SKA-1946,” said Khusnutdinov. “Although, I practiced with the team only for a week and then went to Novogorsk. It’s frustrating that I didn’t get to practice with the team more than that prior to the playoffs. It would have been good to skate more with them.”

- Were you able to quickly adjust after returning to your club?
- We made it just in time for on-ice practice before the game. So we had a little jog, skated for a bit and felt more or less ready for the game. Everyone supported us when we came back. We have been with the team for a year so we had no problems with acclimatization. It’s the first playoffs of my career. I’m happy for myself and for everyone else on the team. After the deciding game, as per tradition, we put on our win song in the dressing-room. We will now start getting ready for the quarterfinals. 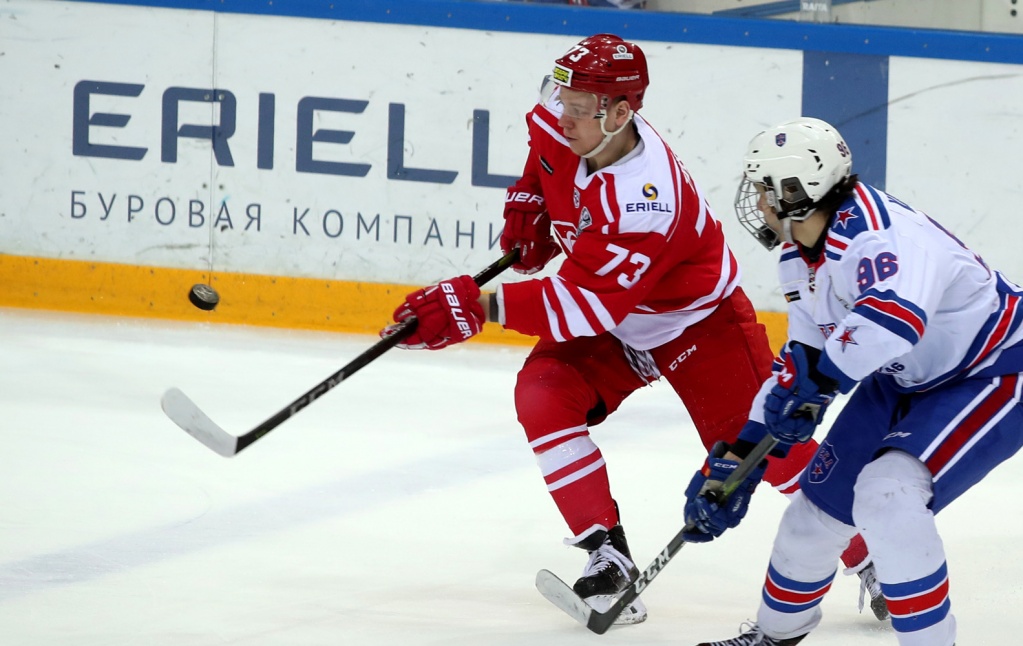 “I joined Spartak mid-series. I was sent down to the junior team after Spartak got eliminated from Gagarin Cup Playoffs,” said Trishin. “I didn’t need any time to adjust. Although, the level is, obviously, different in the two leagues. Emotions, nerves, dedication – it’s over the top in the playoffs, regardless of the league.

“I missed Spartak’s first games but everyone says that it was almost a completely different Spartak in St. Petersburg. In Moscow we had almost no room for mistake but it didn’t lead to extra difficulties. On the contrary, we wanted to win more and skated harder to the net because there was no way back.

“Spartak couldn’t score more than a goal in each game. I think, the reason is that we weren’t taking many shots and didn’t provide shooters with a screen in front of the net. Besides, [Dmitry] Nikolayev played really well. Spartak goaltenders also had a good series so SKA-1946 also had trouble scoring.”

“Key factor of the series was our struggle at capitalizing on power play opportunities,” said Legalin. “Unfortunately, it’s something we struggled with throughout the season. SKA-1946 capitalized on their power play attempts at crucial times, while we couldn’t.

“We failed to extend the series because we couldn’t capitalize on our scoring chances and we lacked focus on defense. We definitely had no troubles with motivation. Besides our fans spurred us on the whole series. I believe that Game 3 was the key bout of the series and we lost it effortlessly.

“SKA-1946 became our matchup for the series in the last moment when HK Riga surpassed us in the standings. I don’t think it would be easier playing against Loko [Yaroslavl]. ‘Railway men’ almost never lose in recent months. They’re on a roll. No one knows how the series against them would have panned out but it definitely wouldn’t have been easier playing against them.”