Krylya Sovetov
News
“I bought a cake and gave flowers to my mom with my first paycheck.” Yaroslav Tsulygin – about his JHL debut with Tolpar
Edgar Varagyan: “When we were on the plane, guys told me: “He is an enforcer, he would beat you up with no sweat.” I thought: things happen, he would beat me up and so what?”
“As time goes by, taking a flight to Sakhalin feels almost like being stuck in Moscow traffic.” Daniil Veremeichik – the JHL's Best Player on Social Media
“Working out in a gym is a type of rest for me.” Ivan Murashov had the best season of his career, dreams of playing in the KHL and has not eaten any fast food for two years
“Condensed milk is the only unhealthy food available for the national team.” Raul Yakupov – about the Black Sea Cup, the KHL debut and the season with Reaktor
“Four years in the JHL was a great time. Winning the Cup with Dynamo was the best moment.” Ivan Didkovsky about junior phase of his career
Metsola-type player of Krasnaya Armiya, Peksa’s progress and solid Gromovik. Dream team goalies
Arseny Gritsyuk is the top rookie of the KHL season
Share

Krylia Sovetov Moscow once again couldn’t reach the playoff phase of the season as they were one of the last teams to see their post-season hopes shattered. The team, that traditionally is very well-supported by Setun fans, had a rather bumpy season. Led by their new head-coach Alexander Trofimov, following several major roster adjustments, Krylia Sovetov got off to a decent start but struggled mightily in late October and early November as ‘Soviet Wings’ lost nine consecutive games and rolled down to the bottom half of Western Conference standings. Krylia Sovetov never fully recovered from that blow. They managed to catch up to the Top-8 teams of the conference and battled for the playoffs almost till the very last day of the regular season. Nevertheless, having lost consecutively the final four games of the season Krylia Sovetov missed the playoffs. 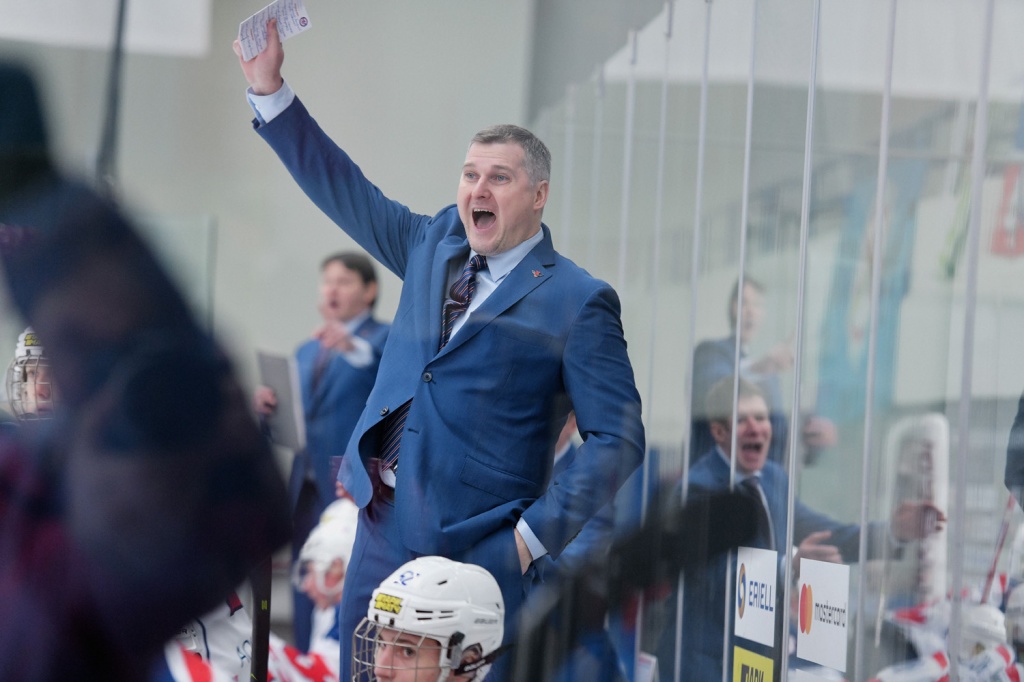 “Early in the season we were still getting used to each other and we played with irregular success,” said Trofimov. “Right after the New Year’s [Krylia Sovetov] had a good stretch but then the team ran into an injury problem and if that wasn’t enough we were hit by a virus, which a lot of our players attracted. That was the key moment of the season. Just as we gained form, we lost our best players. As a result, we could bring just 17 players to our final road trip of the season, half of which were players born in 2002 and 2003. After all, they weren’t ready to play against the top Junior Hockey League teams”.

- This season Krylia Sovetov had a lot of players on their roster, for whom in was their rookie year in Junior Hockey League.
- One of the main things that we can take away from the season is that the adjustment of the players, who hadn’t had any Junior Hockey League experience, takes six months. We gathered the players in July and by early December the players finally realized what they should do and what is expected of them. We had just five players on our roster who truly had Junior Hockey League experience, while others may have been on the roster but in reality spent most of their time on the bench. This season all of them got real ice-time. On the one hand, we constantly had problems due to lack of players with the necessary experience. On the other hand, we gave experience to a lot of players who will play for us next season.

- Several top players will leave Krylia Sovetov Moscow due to age limit. For instance, one of them is going to be Rodion Poroshin, who led all defensemen in points.
- Unfortunately, right now we don’t have replacements for them. Right now I can put together the second, third, fourth and even fifth lines for next season but we don’t have the players for our top line. There’s still plenty of time so we keep looking for top players and skilled hockey players. We need players who are able to decide games on their own in crucial situations. For example, on a power play. This season we couldn’t do anything with our special teams. When we lost Damir Bilyalov to injury, our special team fell apart and we couldn’t fix it with other players.

- Krylia Sovetov Moscow pulled off one of the most sensational trades of the season. The Badanin brothers moved from Omskie Yastreby to Setun. Nevertheless, both players finished the season as Chayka Nizhny Novgorod members…
- We traded for the Badanins exactly for the purpose of them playing together but it didn’t come to be. First Ilya got injured and just as he recovered, Roman got banged up. We never saw them on the ice together and when they played on their own, it was difficult for such skilled players to find chemistry with others. All of our players are of the meat-and-potatoes kind. They’re hardworking and simple. That’s why we decided to part ways with the Badanins.

- Another vivid event for Krylia Sovetov this season – club president Alexei Morozov was appointed the head of Kontinental Hockey League. How did the life of ‘Soviet Wings’ change after that?
- I think, the changes are yet to come. Alexei Morozov, who’s going to be in the news all the time now, will attract a lot of attention to the club and will help Krylia Sovetov to grow. As for the season, it was a certain responsibility to hit the ice in front of Kontinental Hockey League president. Our coaching staff was in touch with Alexei Alexeyevich [Morozov] throughout the season. For instance, when the team was in the middle of that 9-game losing streak, we worked together on ways of improving the situation. He’s a man of hockey with great experience, who played in NHL and KHL.

- This was your debut Junior Hockey League season.
- Working in Junior Hockey League is unique. You can’t gather players and work with them for a long time because of the age limit. You constantly need to bring new players to the team and junior hockey school alumni. Concluding the season, I have to understand who’s going to be on the team the following year so the work process never ceases. It’s not the case, say in VHL, where I had previously worked.

- Describe the season in three words.
- Work, progress and, of course, frustration that we didn’t make the playoffs. I think early in the season there weren’t a lot of those who believed that we would make the post-season after the regular season. But we proved that we’re capable of that. We missed the playoffs by just a little.