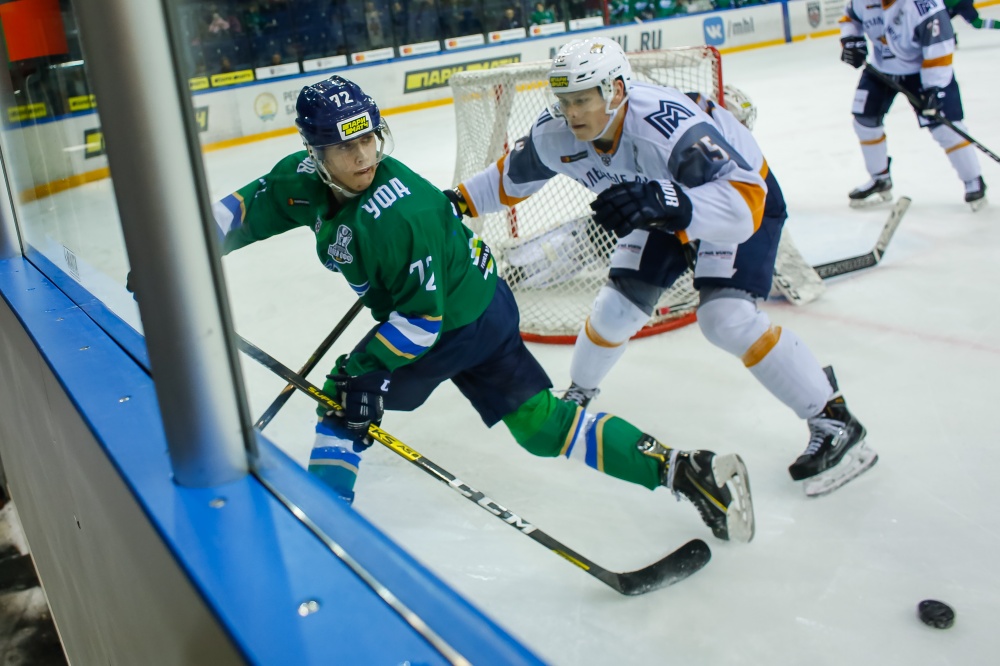 Two final games of the 2020 Kharlamov Cup Playoffs opening round took place on March 16th. We take a look at them in this review. 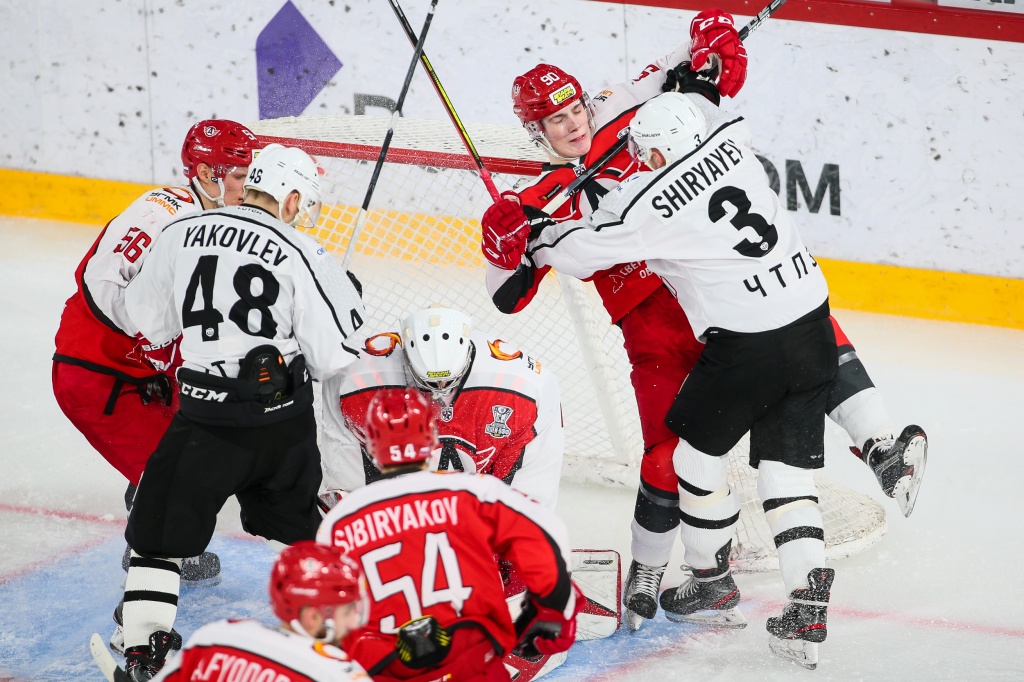 Home team managed to get in the lead in the early moments of deciding Game 5 held in Yekaterinburg. Belye Medvedi Chelyabinsk found themselves down a man and Ilya Ovchinnikov fired it home to give Avto a 1-0 lead. The teams traded power play opportunities after that and ‘Polar Bears’ got the equalizer at even strength – Arkady Aksyonov got the tally. The visitors gradually got the momentum on their side. They moved the play to Vladimir Galkin’s end and began creating one scoring chance after another. However, Yekaterinburg were able to keep the opposition at bay. Only late in the period were Avto able to move the play away from their net and the teams headed to dressing-rooms for the first intermission tied 1-1.

Chelyabinsk were still aggressive in the first half of the second frame but Vladimir Galkin bailed Yekaterinburg time and again. Yekaterinburg evened the game out around the midway point of the stanza and yet couldn’t get anything over the goal-line due to Belye Medvedi goaltender’s amazing play. It seemed that despite the large number of scoring chances no team was going to score a goal in the second period but with less than three minutes remaining on the clock Yegor Stepanov sent one into Avto’s net from point blank range to put Belye Medvedi in the lead.

Third period of action began with several offensive rushes against Ilya Gorbunov as Yekaterinburg were looking to get a quick tying goal but the visitors survived the surge. Avto continued to create scoring chances and got a power play opportunity but not only the visitors managed to kill it off but they also improved their lead as Artyom Shvarev raced away from Avto defensemen and beat Galkin on a breakaway. The visitors focused on playing solid defense, while home team rushed down the ice trying to beat the clock. Nevertheless, they couldn’t get anything past Ilya Gorbunov. Late in regulation home team intensified their pressure and with less than three minutes on the clock Daniil Valitov finally brought Yekaterinburg back to within one. Home team went for one final push but in the last minute of play Belye Medvedi’s Arkady Aksyonov hit the empty cage to get his second goal of the game and thus set the final score. Belye Medvedi win 4-2 and go on to the next round. 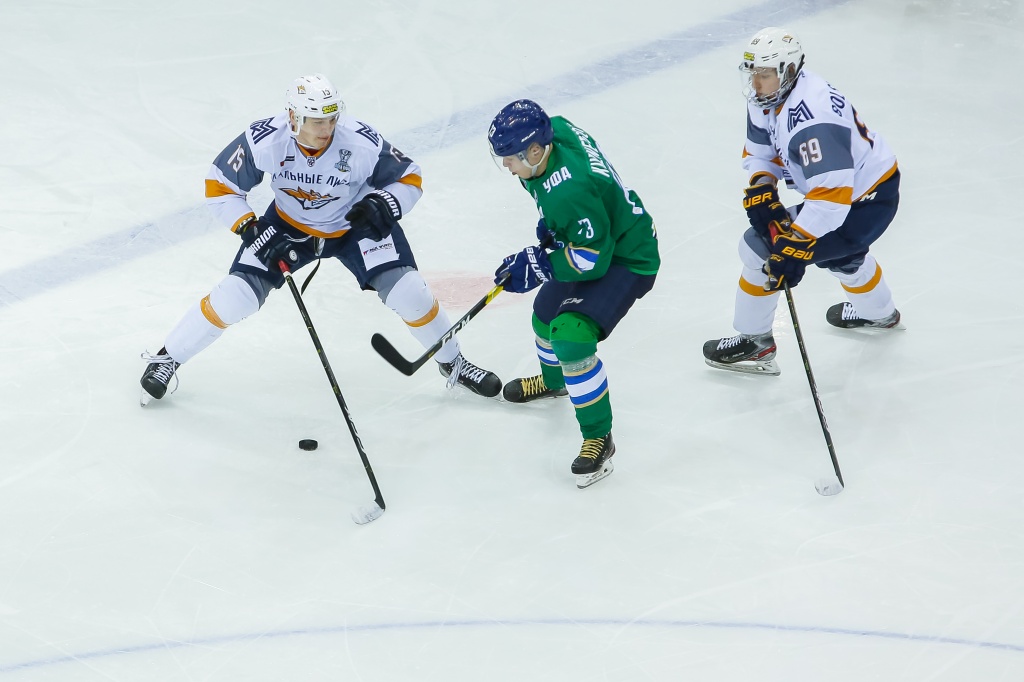 Home team had the momentum on their side in the first minutes of the game in Ufa. Tolpar players moved the play to Nikolai Shashkov’s end right away and went on to open up the scoring as they converted on a power play attempt – Rodion Amirov found the back of the net. Home team continued to look the better side until the halfway point of the period but after that Stalnye Lisy Magnitogorsk began moving the play away from their end and pepper Dmitry Braginsky with shots. The teams spent the rest of the period trading offensive rushes but the score remained unchanged until the second frame.

Tolpar got another power play attempt right after the intermission but this time around Magnitogorsk managed to survive it and grabbed the momentum. The visitors began generating scoring chances more often but Tolpar defense was able to cope with it. Ufa also provided Stalnye Lisy netminder with a lot of work but it was the visitors who were spending more time in the offensive zone. With five minutes till the second intermission Danil Pyatin brought it back to even. However, in the very next shift Tolpar regained the lead as Pavel Yelizarov hit the twine. Thus, Ufa carried a 2-1 lead into the third stanza.

Tolpar improved their lead to two goals early in the third frame – Alexei Pustozyorov found the back of the net. Stalnye Lisy picked up the pace but Tolpar had full control of the game. Midway through the period Pustozyorov scored his second of the afternoon, securing the win for the home side. The visitors found themselves down a man after that, which led Yegor Suchkov to scoring another goal on Magnitogorsk, thus setting the final score. Tolpar win 5-1 and proceed to the quarterfinal round.