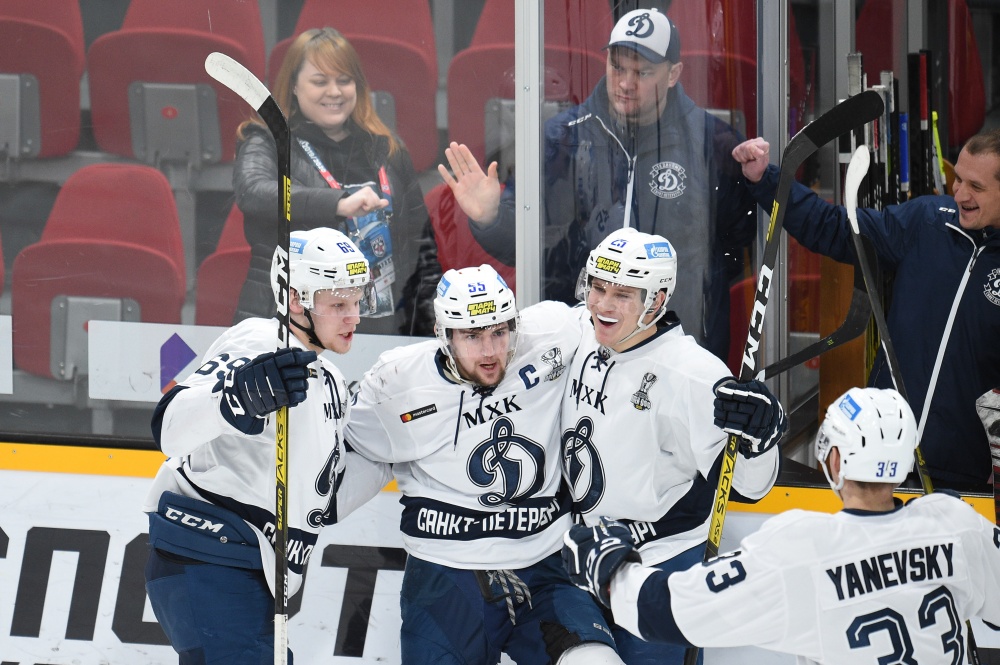 Western Conference teams played their Game 4’s in three series on March 15th. The day before Loko Yaroslavl had beat HK Riga in Game 3 and became the second team to clinch a berth in the quarterfinal round. Today they were joined by three other clubs. 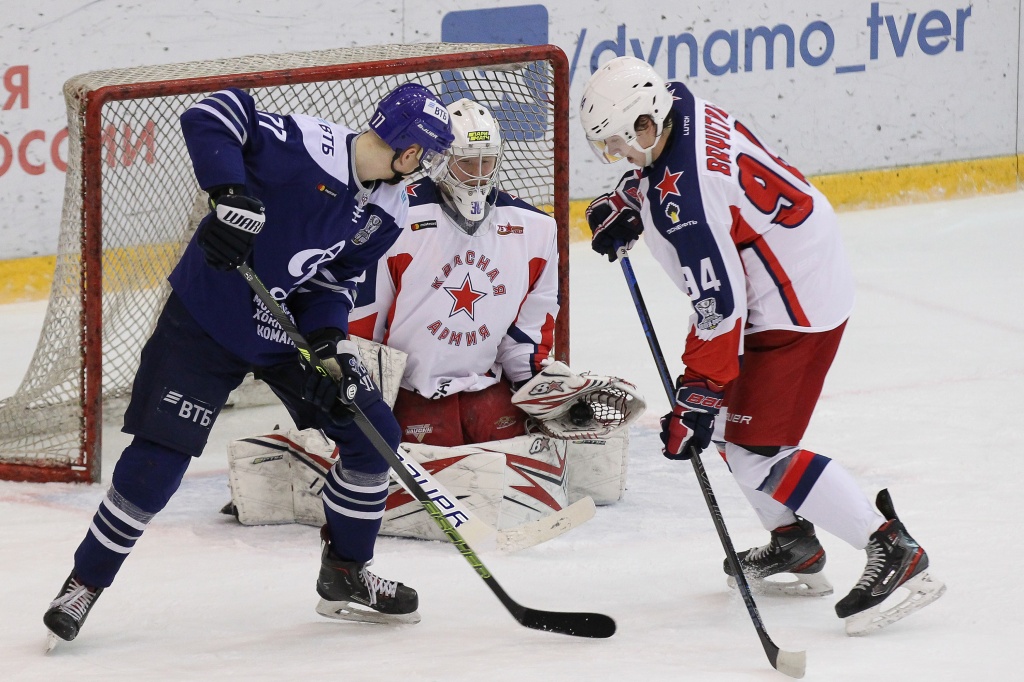 JHC Dynamo Moscow had no room for mistake after losing their second game to Krasnaya Armiya Moscow. The blue-and-white were visibly nervous and the game began with a couple of off-setting minors. Prokhor Poltapov got a minor for tripping, while Dmitry Zlodeyev was sent to the box for embellishing. Soon after that Dynamo’s Oleg Zaitsev got a minor and Krasnaya Armiya made the most out of it. Leonid Klimov, who leads the red-and-blue in points, motored into the zone meeting no adversary and sniped it top-shelf past Vadim Zherenko. Krasnaya Armiya survived a penalty kill and converted on their next man advantage as well. This time it was Yegor Bryutov who found the back of the net as he tucked home a rebound after Klimov’s shot.

Dynamo picked up the pace in the second period of play and began harassing Vsevolod Skotnikov. A minute into the frame Vladislav Mikhailov got a penalty but home team killed it off. After that Bogdan Trineyev caught the goaltender off guard with a long shot. Riding on the high of scoring the goal, the blue-and-white rushed down the ice looking for the equalizer and managed to bring it back to even late in the period. Dynamo put together a quick transition play, Anton Kosolapov passed it to the slot and Yegor Bryzgalov found himself at the right place at the right time to beat Skotnikov. 2-2 after 40 minutes of play.

The score didn’t change in the third stanza as the teams were evenly matched. Dynamo were a bit closer to scoring a goal but regulation solved nothing. As per regulations, in case of a tie in regulation an elimination game goes not into 10-minute but a 20-minute sudden death overtime with no shootout. Dynamo once again had the momentum on their side and were taking more shots against Skotnikov but to no avail. Only late into double overtime did Krasnaya Armiya convert on one of their rare counter-attacks, making Dynamo pay for a defensive mistake. The game proved to be the 4th longest in Junior Hockey League history. Krasnaya Armiya win 3-2 in double overtime and proceed to the quarterfinal round to face reigning champions Loko Yaroslavl. 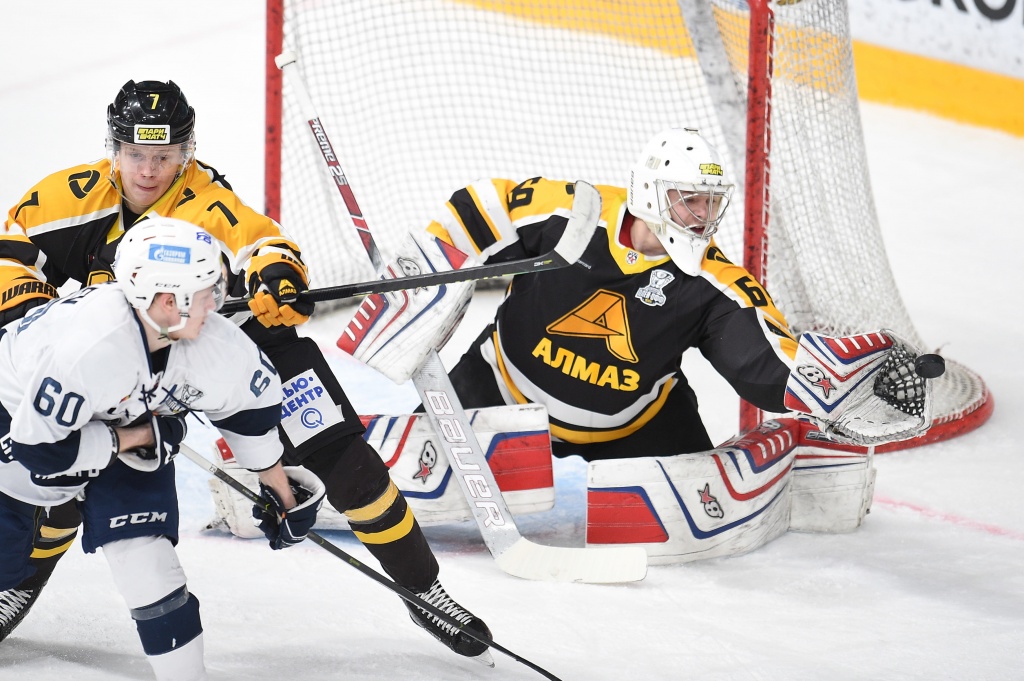 Another team with no room for mistake was Almaz Cherepovets, who are no strangers to salvaging series. Almaz were down 2-1 in the series against JHC Dynamo St. Petersburg, which meant they had to win Game 4 at home and go back to St. Petersburg for deciding Game 5. It was a daunting task, especially given that Dynamo were in no mood to see the series go all the way. The visitors outshot Cherepovets in the opening period of play but were on par with them in terms of shot on net. Both Makar Chufarov and Denis Rybalkin had a lot of work on their plates.

Early in the second period the visitors managed to get one past Cherepovets netminder. It all began with an abysmal mistake by Makar Khabarov, who passed it straight to the tape of Yegor Anisimov in his own zone. The quickest player of KHL All-Star Skills Competition appreciated the gift and sent the puck into the back of the net. Shortly before the halfway mark of the second period Khabarov made up for his mistake. He took a shot from a poor angle and caught Chufarov off guard with a great wrister to tie the game up.

Cherepovets got in the lead less than a minute into the third stanza. This time Vladislav Gertsik took a great shot and sniped it home from far out. Dynamo responded with another goal by Yegor Anisimov. Game officials had to review the play to confirm that the puck fully crossed the line. Midway through the period Vitaly Budnitsky got a minor penalty for tripping and it took Makar Khabarov just 14 seconds to put Cherepovets back in the lead. The duel between Khabarov and Anisimov carried on. This time Anisimov tipped the puck in on a long shot but it was waved off after video review as there was high sticking on the play. Nevertheless, the visitors did get the equalizer. With 11 seconds remaining to be played in regulation Dynamo made their final push count – Alexander Zhabreyev got the tally. Series-clinching goal came four minutes into overtime. Almaz looked demoralized and it led to Pavel Kuznetsov scoring the winner. Dynamo proceed to the next round to face their St. Petersburg rivals SKA-1946. 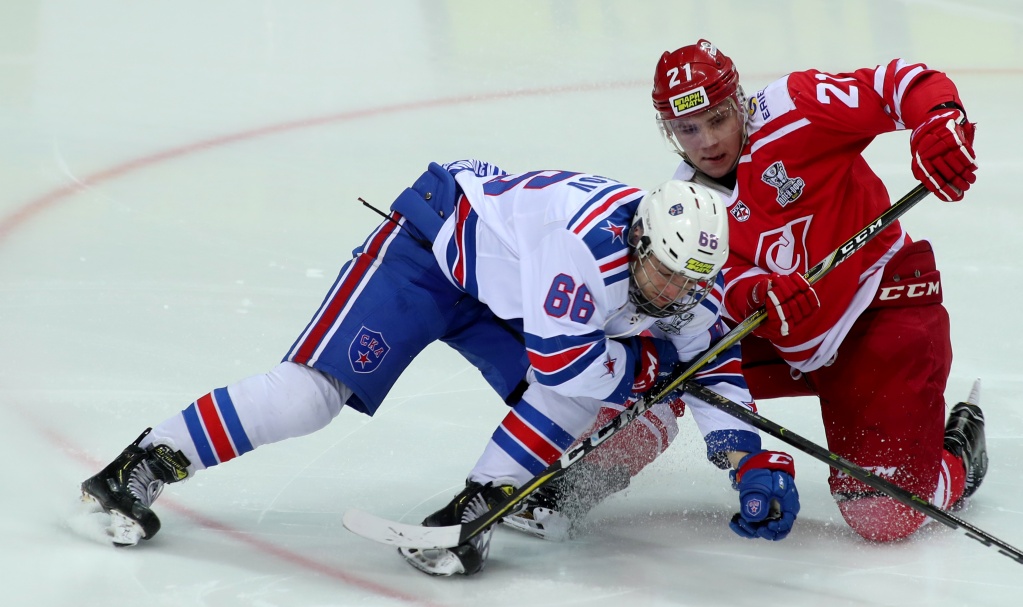 JHC Spartak Moscow played hosts to SKA-1946 St. Petersburg, who finished on top of the Western Conference in the regular season. The day before Spartak got off to a bad opening period and ended up losing the game. This time around they played with much more caution. The teams traded power play opportunities (notably, Spartak goaltender Matvei Botov got a minor penalty for delay of game) but couldn’t find the back of the net. However, St. Petersburg did manage to score at even strength. Arseny Brinkman chipped it out from the blue line straight to the tape of Ivan Ivanov. The latter took a screen shot and Botov couldn’t react to it. The 46’s carried a 1-0 lead into the second frame.

The visitors improved the margin four minutes into the next period. Ivanov took a muffin of a shot but the puck bounced to Alexei Tsyplakov, who tapped it into the open corner. Botov attempted a desperation soccer-like save but to no avail. Spartak grabbed the momentum and began peppering Dmitry Nikolayev with shots. ‘Army men’ survived a penalty kill but the red-and-white managed to pull back to within one soon after that. A long passing play led to several shots and chaos in the slot area. Yegor Kravchenko had the quickest hands in the scrum and pushed the puck over the goal-line. SKA-1946 still had a 2-1 lead after 40 minutes of play.

Despite a solid performance in the second stanza Spartak couldn’t turn the game around. Alexei Tsyplakov scored his second of the afternoon four minutes into the frame to give St. Petersburg some security. ‘Army men’ focused on protecting their lead and after the red-and-white failed to convert on a power play attempt late in regulation Ivan Ivanov sealed the deal with the empty-netter. SKA-1946 win 4-1 and eliminate Spartak from the playoffs.