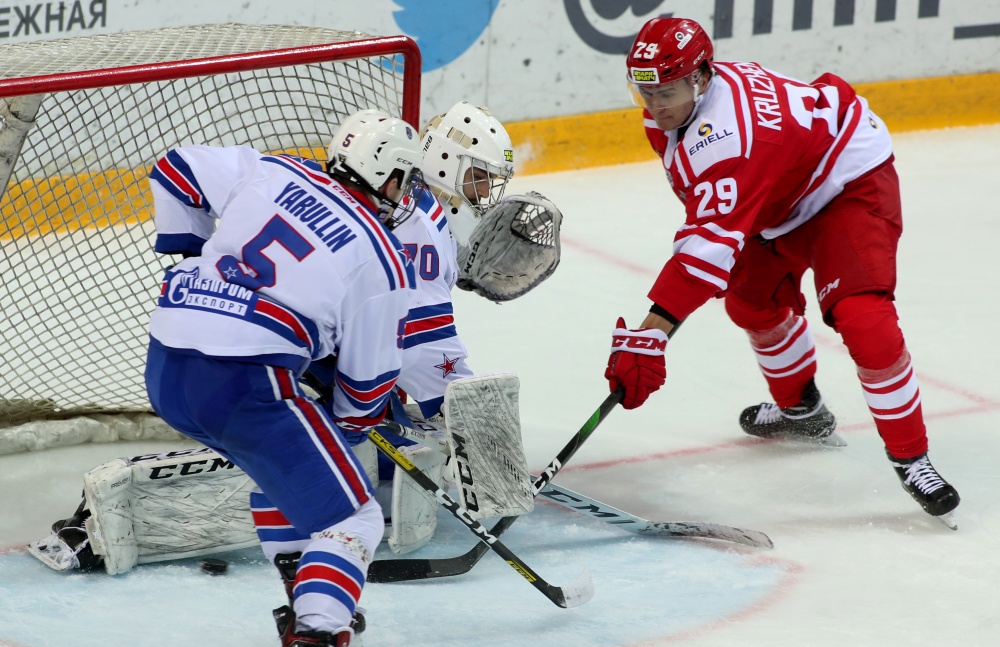 Eight Western Conference teams hit the ice in Round of 16 of the Kharlamov Cup Playoffs on March 14th. Three series were to see their deadlocks broken, while one team could get eliminated. We take a look at Saturday action in this review. 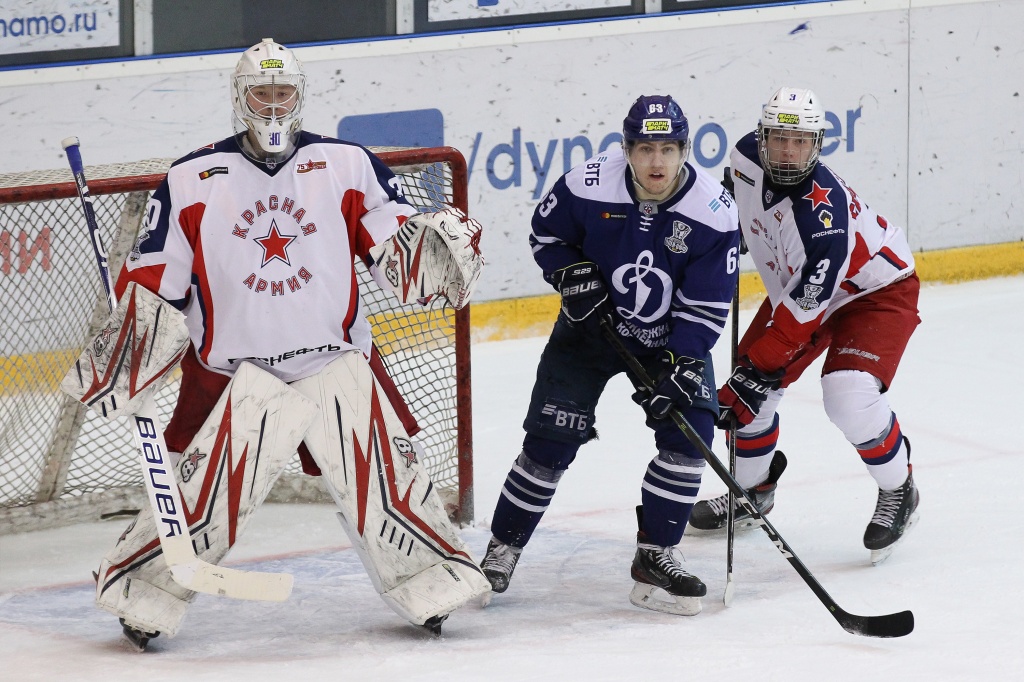 The teams began the game at even pace but couldn’t create any scoring chances for some time. It all changed after JHC Dynamo Moscow’s Semyon Barinov got injured receiving a hard hit. The blue-and-white picked up the pace so much that Krasnaya Armiya Moscow’s coaching staff had to call timeout. However, augmented emotionality led to one of Dynamo players getting penalized. The visitors converted on the ensuing power play on a long passing play. After three rebounds Yegor Filin shoved the puck over the goal-line. Game officials reviewed the play for a while and finally rendered the goal illegal as there was goaltender interference on the play.

The game calmed down once again in the second period. Dynamo were taking more shots but it was Krasnaya Armiya who opened up the scoring converting on one of their counter-attacks. Nikita Dolgopyatov received a crisp pass from Artyom Pugachyov at the blue line, raced to the net on a breakaway and beat Vadim Zherenko. The goaltender lifted the net off its moorings sliding to the side but the goal still counted.

The game proved to be the only one scored in the game. Krasnaya Armiya had a chance to double their lead soon after as Bolshakov gave up possession right in front of his net but Zherenko gave the shooter nothing to aim for as he skated to on top of the crease. Dynamo fired up only late in regulation. The blue-and-white had a 6-on-4 advantage in the final minute of play and had a chance to force overtime but Mikhail Semeneko hit the iron.

With this 1-0 win Krasnaya Armiya now lead the series 2-1 and can earn promotion to the quarterfinal round in the very next game. 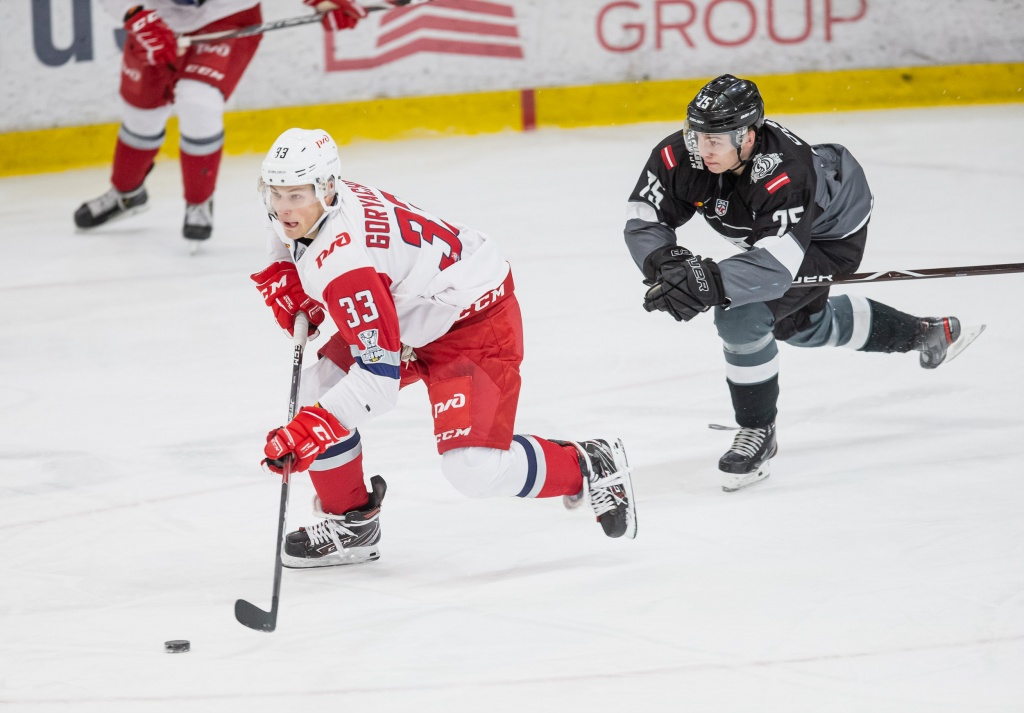 Game 3 of the series between Loko Yaroslavl and HK Riga was held without fans due to coronavirus pandemic. Latvian fans didn’t get to see live their team’s first home playoff game in five years. ‘Railway men’ were joined by defenseman Anton Malyshev prior to the game, while Vladislav Okoryak, who played in Game 1, got the nod again. Raimonds Vilkoits didn’t make any adjustments to his roster.

Home team came our hard for the game, heavily outshooting the opposition (19-to-9) and yet couldn’t get anything past Okoryak. As for Yaroslavl, they opened up the scoring 12 minutes in. Maxim Beryozkin skated down the wing, beat his defenseman and made a cross-ice pass, on which Maxim Denezhkin tapped it home.

HK Riga continued to pepper Okoryak with shots from all over the ice in the second period of play and managed to get the equalizer halfway through the frame. Mikus Mintautiskis hit the target. The game stayed tied until midway through the third stanza when the visitors scored three unanswered goals. First Alexander Daryin put the ‘railway men’ in the lead. Three minutes later Vladislav Rybakov capitalized on a power play opportunity. Latvian team spent the last four minutes of regulation shorthanded as Richards Gringbergs got a 5-minute major and then couldn’t survive a 5-on-3 as Daryin scored his second of the game.

With this 4-1 win reigning champions Loko Yaroslavl clinch the series and proceed to the quarterfinal round. The season is over for HK Riga.

JHC Dynamo St. Petersburg score in the last minute of overtime, get a win 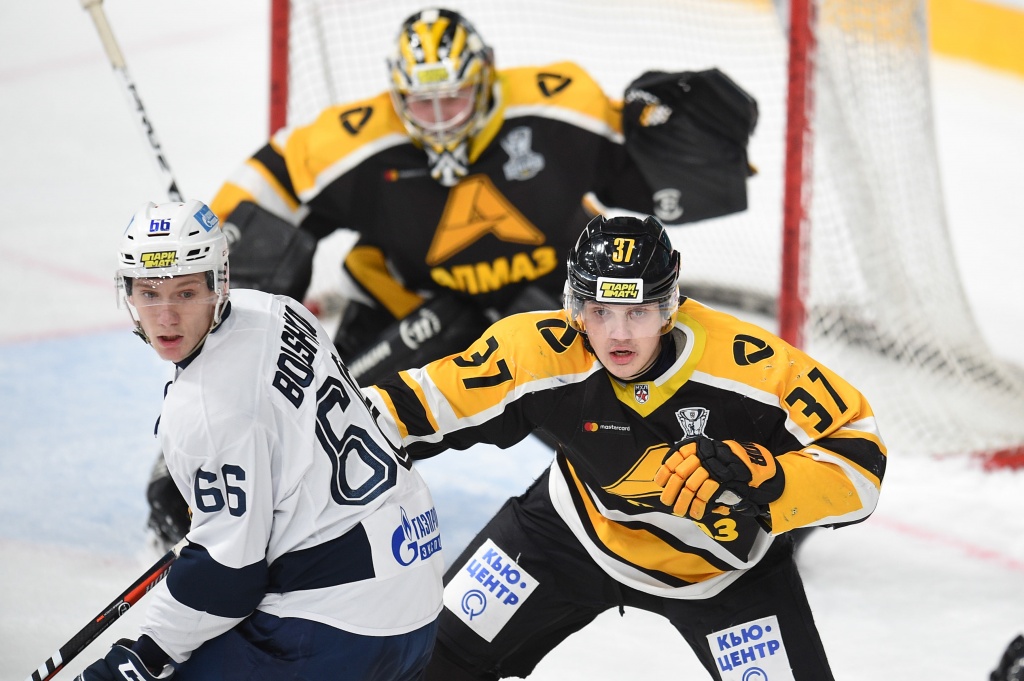 Both teams made minor adjustments to their rosters for Game 3. Alexei Kapusin made his way back to Almaz Cherepovets’ lineup as he had recovered from an injury, while Yegor Bashkatov replaced Vladislav Baznayev with Ivan Antonovsky on JHC Dynamo St. Petersburg’s 4th defensive pairing.

The game drew a crowd of 2,000 fans, among which were several Severstal Cherepovets players. Among others Almaz alumnus Igor Geraskin was in the stands. Geraskin participated in last year’s Kharlamov Cup Playoffs.

While the fans were treated to just a single goal in the first period of play as Vladislav Fyodorov put Cherepovets in the lead 11 minutes in, the teams combined for as many as five goals in the second frame. Five minutes after the play resumed Mikhail Kalashnikov doubled the lead for the home side but then got a minor penalty, which led to Gleb Shaborshin solving Konstantin Shostak. Soon after that Dmitry Rashevsky, who finished on top of the league in regular season goals, brought it back to even. The teams traded goals in the last minute of the period as well. Makar Khabarov and Alexander Zhabreyev got the markers.

After such a high-scoring second frame the game calmed down once again in the third. The teams created scoring chances often but couldn’t find the back of the net for a while. The winner was decided only in the last minute of overtime. With 53 seconds till the buzzer Sergei Yanevsky scored on Cherepovets and gave Dynamo a 2-1 lead in the series.

SKA-1946 enjoy a solid win over Spartak in Moscow 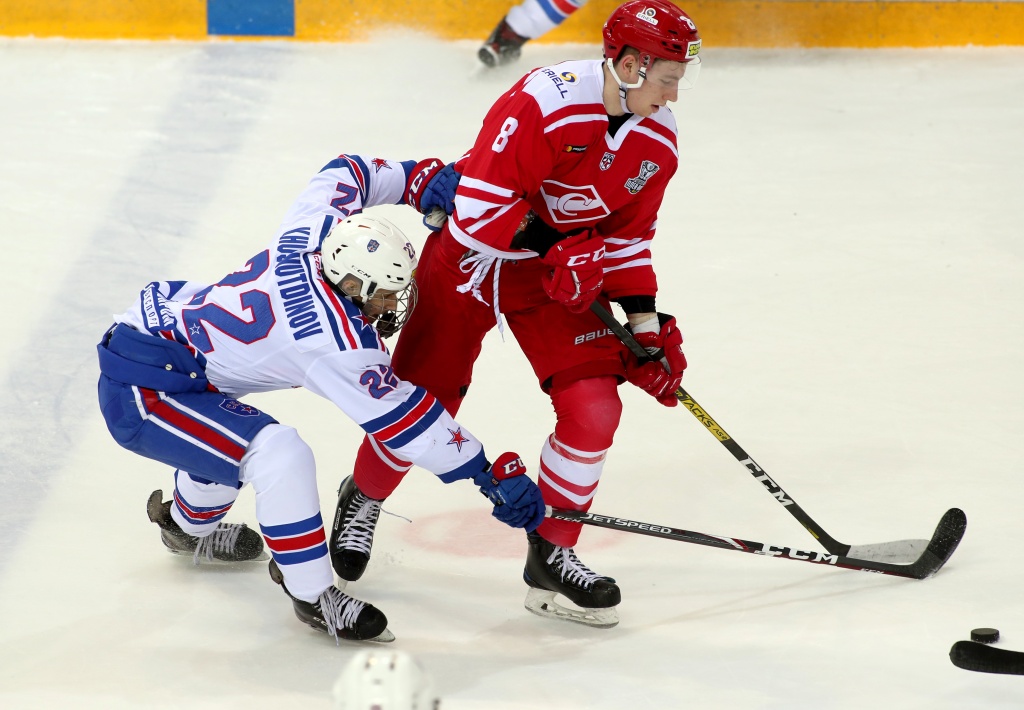 Prior to Game 3 of the series SKA-1946 St. Petersburg were joined by a large number of players. Marat Khusnutdinov and Ilya Rychkov returned from U18 Team Russia, while Dmitry Semykin was sent down from VHL team. As for JHC Spartak Moscow, they got reinforcements only in Akim Trishin, who was sent down to junior team after Spartak was eliminated from Gagarin Cup Playoffs.

Home team looked more aggressive early in the game. Spartak had a chance to get in the lead when Dmitry Nikolayev made a clumsy pass by ‘army defensemen’ cleaned it up. The visitors opened up the scoring six minutes into the game. Semykin won the battle for the puck at the boards and put it on net from a poor angle. Dmitry Kulikov wasn’t screened and yet let it in what seemed to be a harmless shot.

Second period of play began with the red-and-white getting a penalty. It took SKA-1946 less than a minute to capitalize on it. Ivan Manin passed it to Alexei Tsyplakov from the corner and the forward tapped the feed into the open corner. With 30 seconds till the intermission Tsyplakov scored another power play goal and established a comfortable lead for his team after 40 minutes of action.

In the final stanza Vladimir Tyurikov’s men couldn’t turn it around, taking just 12 shots against Dmiry Nikolayev. Nikita Shuidin set the final score with yet another goal on a power play. SKA-1946 converted on three man advantages out of five, scoring three of their four goals on a power play. ‘Army men’ of St. Petersburg enjoy a solid 4-0 win and retake the lead in the series.