Four Kharlamov Cup playoff games took place in the Eastern Conference on March 13th. We take a look at Thursday action in this review. 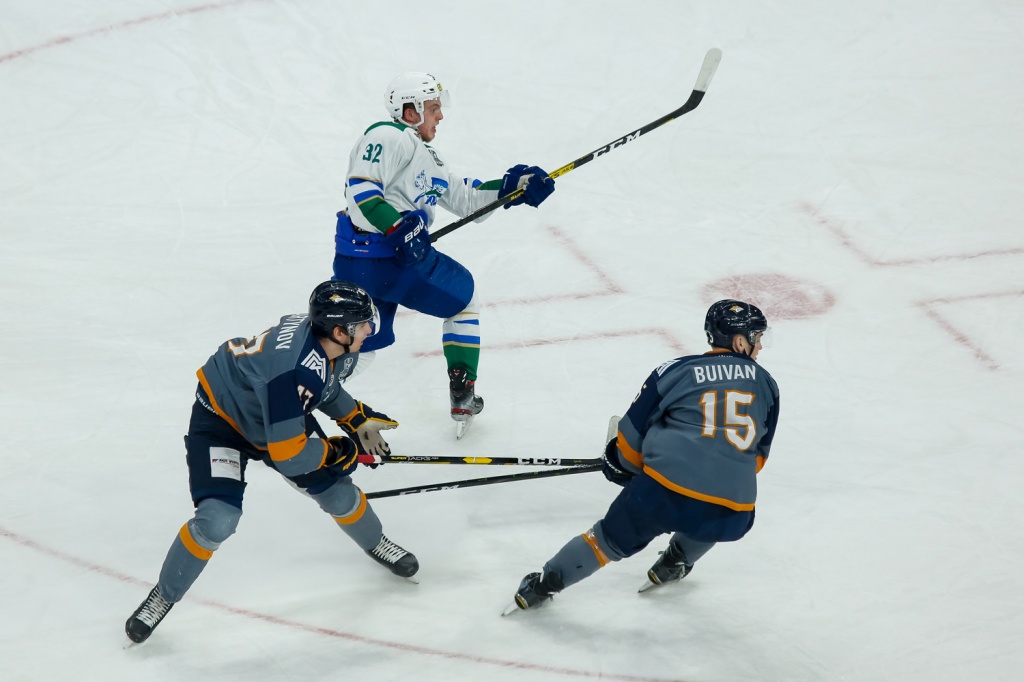 Stalnye Lisy Magnitogorsk came out hard for Game 3 of the series against Tolpar Ufa. In the first five minutes of play home side managed to create several good scoring chances against Alexander Kuleshov. The pressure led a goal by Dmitry Sheshin, who opened up the scoring in the game. However, just two minutes later Ufa tied it up as Nikita Skoropad found the back of the net. It seemed that the visitors grabbed the momentum but soon after that the ‘Steel Foxes’ scored their second – Nikita Rozhkov hit the twine. Having allowed another goal, Tolpar continued to increase their pressure in the offensive zone but couldn’t bring it back to even before the intermission.

The visitors came out hard for the second stanza as well, while home team paved the road for them by getting a penalty. Nevertheless, Stalnye Lisy managed to survive it, even though Tolpar did create several good scoring chances on the power play. Moreover, midway through the frame Stalnye Lisy scored another goal but it was waved off. The visitors continued to play hard in front of Nikolai Shashkov’s net right until the end of the period, while Magnitogorsk relied on quick transition plays. As a result, neither of the teams was able to score a goal in the period.

Early in the third period home team found themselves down 2-man and Tolpar were able to capitalize on the power play chance to level it on the scoreboard. Yegor Suchkov got the equalizer for Ufa. The teams kept trading dangerous offensive rushes after that, waiting for their counterparts to make a mistake. Eastern Conference regular season champions made it first. They got a penalty and Yuri Platonov put Stalnye Lisy back in the lead on the ensuing power play. Tolpar did everything they could to tie it up again in the remaining time, trying to salvage the game but Magntogorsk pulled through. With 29 seconds on the clock Stalnye Lisy secured the win with an empty-netter – Platonov got his second goal of the game. Thus Magnitogorsk are now just one win away from clinching the series. 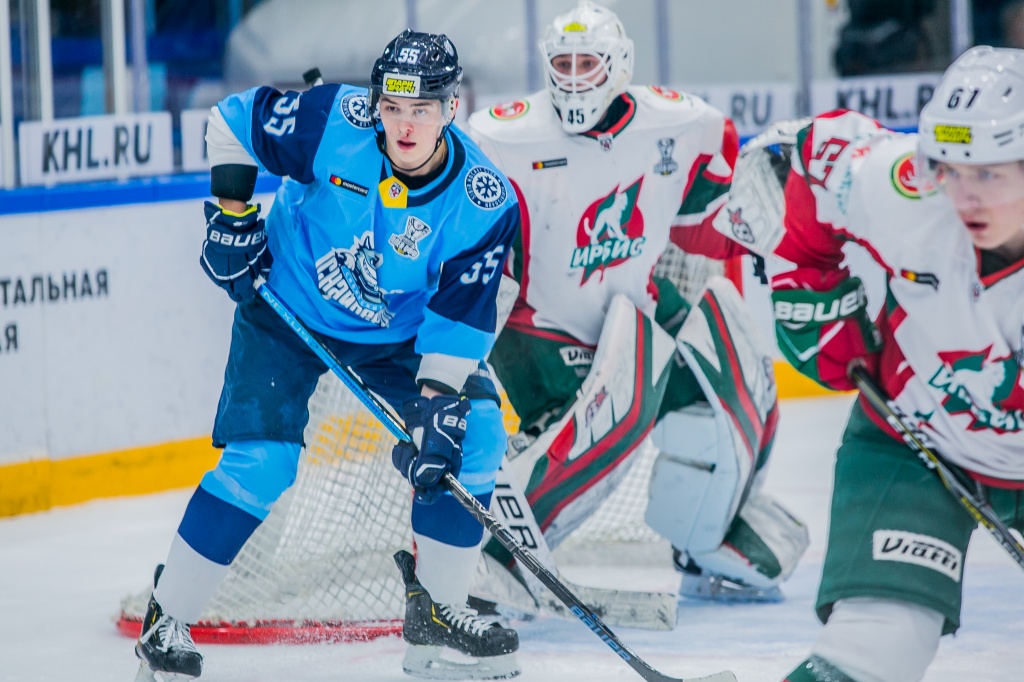 Irbis Kazan established a 2-goal lead early in the opening period of play. Just by 8th minute after the puck dropped in Novosibirsk Ilnur Shabanov and Denis Komkov had a tally each. However, after that it was the home team that had the momentum on their side. Sibirskie Snaipery were pinned against the wall and did everything they could to tie the game. A little later Sergei Dubakin put the ‘Snipers’ on the board and made it a 2-1 hockey game. Novosibirsk spent almost the entire second half of the period in the offensive zone but Vladimir Mosin backed up Kazan with a great performance in goal at even strength and shorthanded. As a result, Irbis had a 2-1 lead heading into second period.

After that the visitors were able to clip the wings of Snaipery’s offense, not letting them create any scoring chances. Moreover, six minutes into the period Adel Bulatov further improved the lead for Irbis. However, home team continued to look for chances in the offensive zone, doing their best to salvage the game. Midway through the stanza Sergei Dubakin scored his second goal of the game, once again pulling Sibirskie Snaipery back to within one. Nevertheless, this time they couldn’t put together a late push and Kazan once again went to the dressing-room with a narrow lead.

The flow of the game didn’t change in the third period. Kazan milked the clock, not letting the opposition get on the offense and tie the game. Novosibirsk battled till the very end, throwing everything they had at Irbis late in regulation and pulling their netminder for the extra attacker but it was all in vain. Irbis win 3-2 and become the first Junior Hockey League team to clinch the quarterfinals.

Avto enjoy a solid win over Belye Medvedi in Game 3 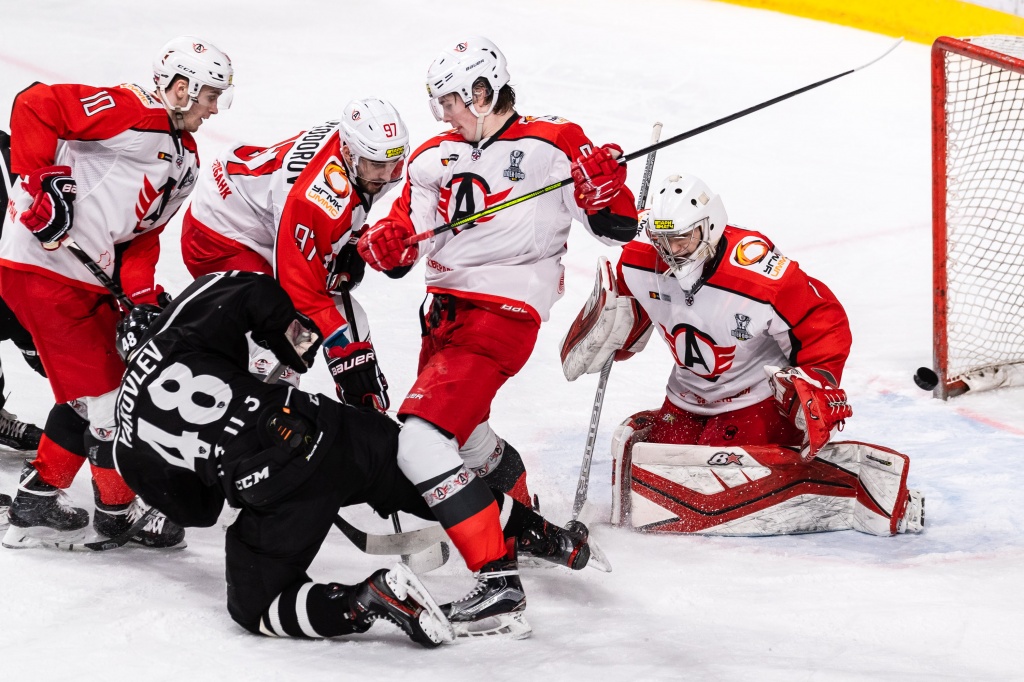 The play was in Belye Medvedi Chelyabinsk zone in the first couple of minutes of the game. The visitors took several good shots on Ilya Gorbunov and six minutes in got one past him. Sergei Kolesnikov zinged a wrister. Home team got the momentum on their side after that. Vladimir Galkin was called to action on several occasions and bailed Avto out. Yekaterinburg played solid defensively at even strength and shorthanded. As a result, they carried a narrow lead into the next period.

The visitors were able to establish control of the puck in the second stanza and got the momentum. Yekaterinburg weren’t letting the opposition create anything offensively and get any chances in front of their net. Moreover, the visitors were spending more time in the offensive zone and posed trouble for Belye Medvedi defense. Home team managed to level the game out only in the second half of the period when Avto got a penalty. However, ‘Polar Bears’ failed to convert on the ensuing power play attempt. Nevertheless, Chelyabinsk stayed aggressive at even strength but it was all in vain as they were still trailing after 40 minutes of play.

They did find the back of the net early in the third period. Maxim Shabanov solved Galkin with a shot from the slot. However, the visitors regain the lead in no time as Daniil Valitov hit the target. Home team tried to get their second goal of the game in a hurry as well but Avto played with focus defensively, relying on quick transition plays. Gradually, the visitors picked up the pace, not letting Belye Medvedi get the equalizer. With less than three minutes remaining to play in regulation the visitors capitalized on a massive offensive rush. Kirill Tyutyayev sniped it top-shelf to set the final score. Avto win 3-1 and get their second success in the series.

Omskie Yastreby blank Mamonty Yugry, get their second win of the series 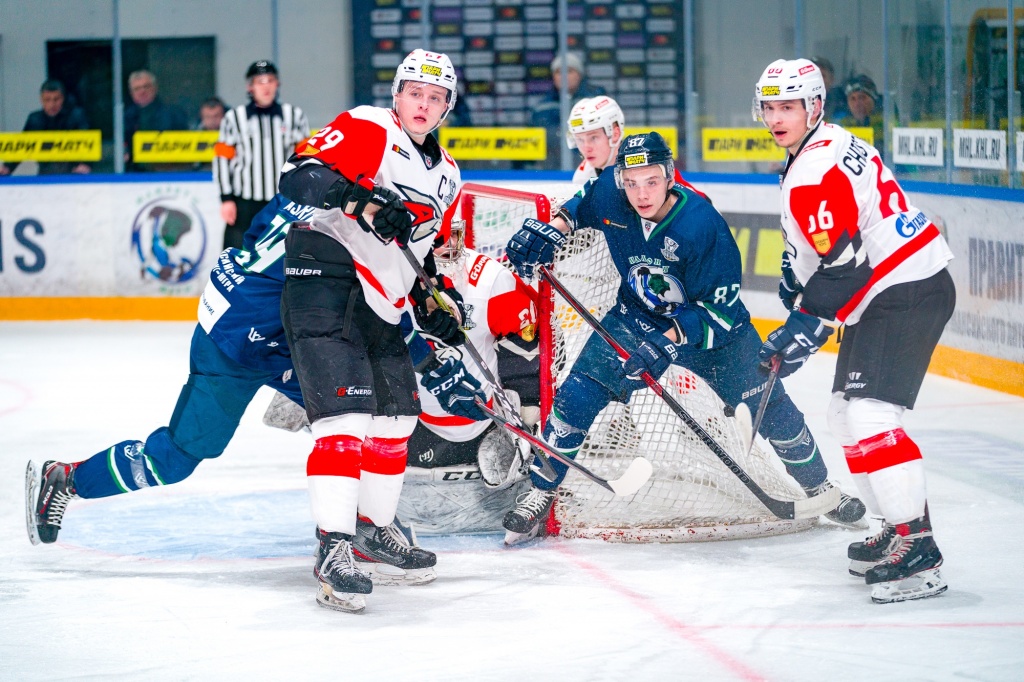 Omskie Yastreby grabbed the momentum early on and pinned Mamonty Yugry to their net. Home team was able to cope with the pressure imposed by the ‘Hawks’ but then the visitors picked up the pace, which turned out to be a problem for the ‘Mammoths’. First they got two consecutive penalties, but Omskie Yastreby couldn’t get anything past Konstantin Kuzmaul. Late in the period Khanty-Mansiysk found themselves down 2-man. The visitors managed to capitalize on the opportunity. In a span of 23 seconds Nikita Skorobogatov and Yegor Chinakhov got a tally each.

After that intermission Mamonty Yugry were able to level the game out and began creating scoring chances making Georgy Dubrovsky work hard. Seven minutes into the frame home team got a chance to get a goal back but they couldn’t capitalize on a man advantage. As for Omskie Yastreby, they continued to play aggressively, doing their best not only to protect their lead but also improve it. Nevertheless, Mamonty Yugry’s defense was able to keep the opposition at bay. As as result, there was no scoring in the second period.

In the third stanza Mamonty Yugry once again tried to get the momentum on their side and move the play to the offensive zone but Omskie Yastreby succeeded at slowing the pace of the game and impose their brand of hockey. The ‘Hawks’ didn’t let Khanty-Mansiysk take many shots, solidly protecting their lead. Late in regulation Mamonty Yugry got another power play opportunity but couldn’t convert on it either. As a result, Omskie Yastreby blanked the ‘Mammoths’ and got their second win of the series.