Four Game 2’s were played on March 11th. Notably, three of them began unusually early due to tight schedules of several arenas, which also host KHL games. Nevertheless, it didn’t stop the teams from engaging in exciting and solid battles. 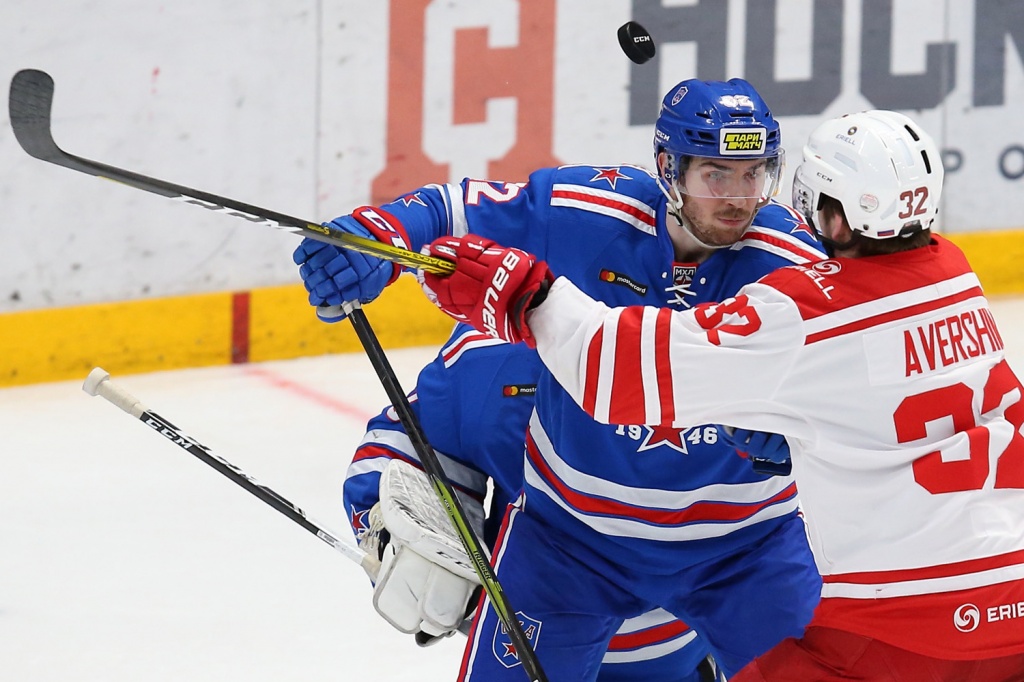 SKA-1946 St. Petersburg faced JHC Spartak Moscow in Game 2. Despite the fact that it’s a series between the top and 8th seed of the Western Conference, playoff is a different beast and Spartak had put up a decent fight to the worthy foe the day before. The game at Hokkeyny Gorod ended in overtime, which the 46’s won. There was no scoring in the opening period of play in Game 2, although the visitors were quite close to breaking the deadlock, while St. Petersburg looked nervous. Late in the game Artyom Zhuk got a 5-minute major and a game misconduct for checking to the head.

The red-and-white began the second frame with a power play as Ilya Ivantsov got a minor. The forward was about to step back onto the ice when the visitors capitalized on the man advantage. After a slapshot from the left wing Evgeny Belov found himself at the right time in the slit and skillfully redirected it home. Dmitry Nikolayev couldn’t stop the deflection and Spartak captured the lead. Alexander Gordin had a great chance to bring it back to even but hit the post. The vistiros also had a chance to extend their lead but Arslan Yarullin managed to bail out his team on an odd-man rush.

‘Army men’ stayed aggressive in the third stanza and finally did find the back of the net. Oleg Korchagin got a 2-minute minor for roughing and St. Petersburg’s special unit got the job done. Alexander Gordin, who leads SKA-1946 in points, sniped it top-shelf. The score didn’t change in the final ten minutes of regulation. Overtime solved nothing either. Even the shootout went on for a while. The teams were tied 2-2 when Kirill Tagirov put it past Nikolayev, while Gordin couldn’t slip it past Matvei Botov. Spartak win 3-2 in the shootout to tie the series. 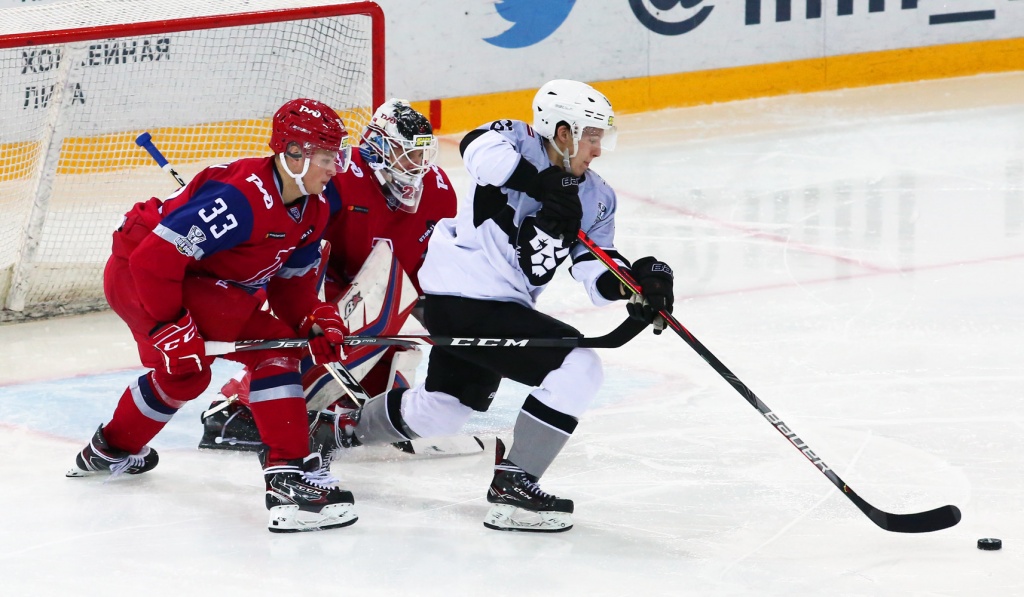 Reigning Kharlamov Cup champions Loko Yaroslavl faced HK Riga in Game 2. The day before Yaroslavl scored four unanswered goals but the game was close and at times rather rough. This time Loko started Daniil Isayev in goal, while Riga coaching staff didn’t make any adjustments in that regard and gave the nod to Janis Voris once again. Home team got a 2-man advantage for over a minute but managed to convert only when it went back to 5-on-4. Maxim Denezhkin sniped it home from the right face-off circle. Soon after that Latvian team scored their first goal of the series – Janis Svanenbergs proved he’s still the top-scorer of his team as Isayev failed to slide across in time to make a stop.

Just 48 seconds after the puck dropped for the second period Yaroslavl regained the lead. Yegor Manin skillfully dangled past his defenseman and hit the twine with a nifty backhand shot. The score changed again shortly after that. Miks Tumanov hit the post behind Isayev, Denis Fjodorovs took another shot and Bulat Galimov shoved it into the back of the net from the goal-line. HK Riga evened it out on the shot-clock somewhat as they sprayed Isayev with shots from all over the ice. After 40 minutes of play the teams were tied 2-2.

The game was close in the third period as well. Both teams had a power play opportunity and the experience of ‘railway men’ proved to be key in the end. One of Loko veterans Vladislav Rybakov put Yaroslavl back in the lead. He found himself all alone in the slot and beat Janis Voris from close range. Final buzzer was only a few minutes away, HK Riga pulled their goaltender for the extra skater but allowed an empty-netter. Manin scored his second of the game. Thus Loko improve their lead in the series to 2-0. HK Riga will have no room for mistake in Latvia’s capital. 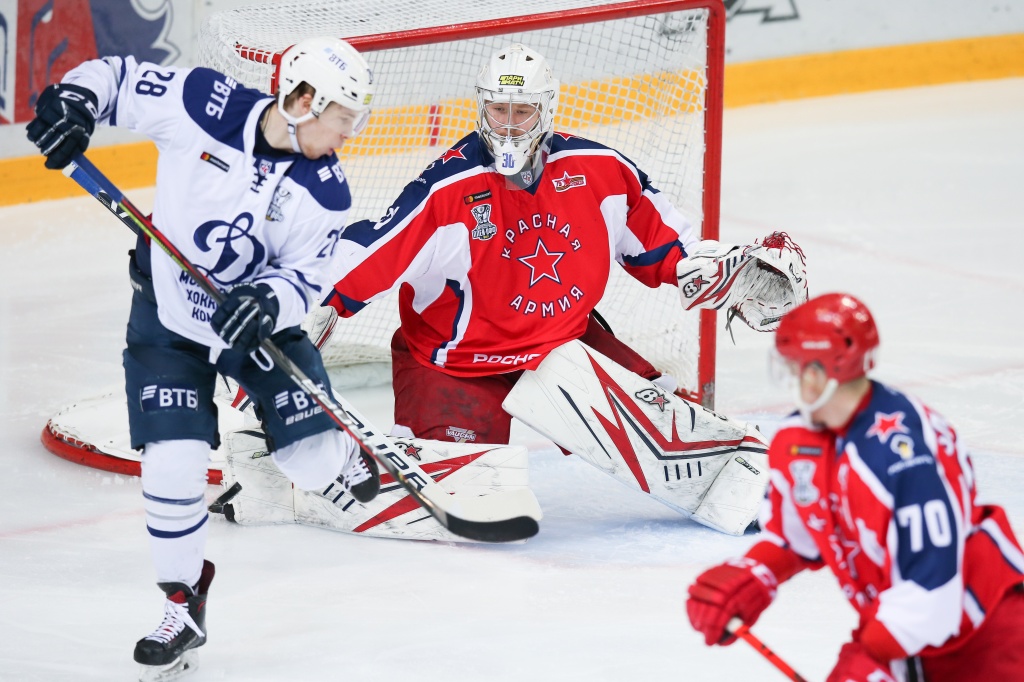 Krasnaya Armiya once again faced their Moscow rivals JHC Dynamo at CSKA Ice Palace. The day before 2-time Kharlamov Cup champions won a hard-fought game, but Yaroslav Lyuzenkov’s men looked solid. First period of action began with several offensive rushes by the home side but it was Dynamo who opened up the scoring six minutes in – a long possession play ended with a snipe by defenseman Vasily Machulin. Vsevolod Skotnikov was screened by his defensemen along with several opponents and the puck hit the top corner. ‘Army men’ couldn’t turn it around in the period and the teams headed to the dressing-rooms for the first intermission with Dynamo having a 1-0 lead.

Home team rushed down the ice looking for the equalizer right after the play resumed and almost shoved the puck in on one rush along with goaltender Vadim Zherenko. Dynamo responded with a breakaway but Yegor Zvonov couldn’t slip it past Skotnikov. Midway through the period the blue-and-white found themselves down 2-man but managed to survive it. The score didn’t change before the buzzer and Dynamo still had a narrow lead after 40 minutes of play.

Six minutes into the third stanza Yegor Kuzminov was a bit careless with his stick and got a 2-minute minor. The visitors made the most out of the situation. A long passing play in Skotnikov’s end led to a solo dash by Mikhail Semeneko and a shot from point blank range. Dynamo continued to play smart defensively, while Arman Iritsyan’s penalty didn’t help Krasnaya Armiya’s case. Home team pulled their goaltender late in regulation for the extra attacker and in the last second Anton Kosolapov hit the empty cage to seal the deal. Zherenko went on to stop 35 shots and Dynamo tied the series, which now moves to Tver. 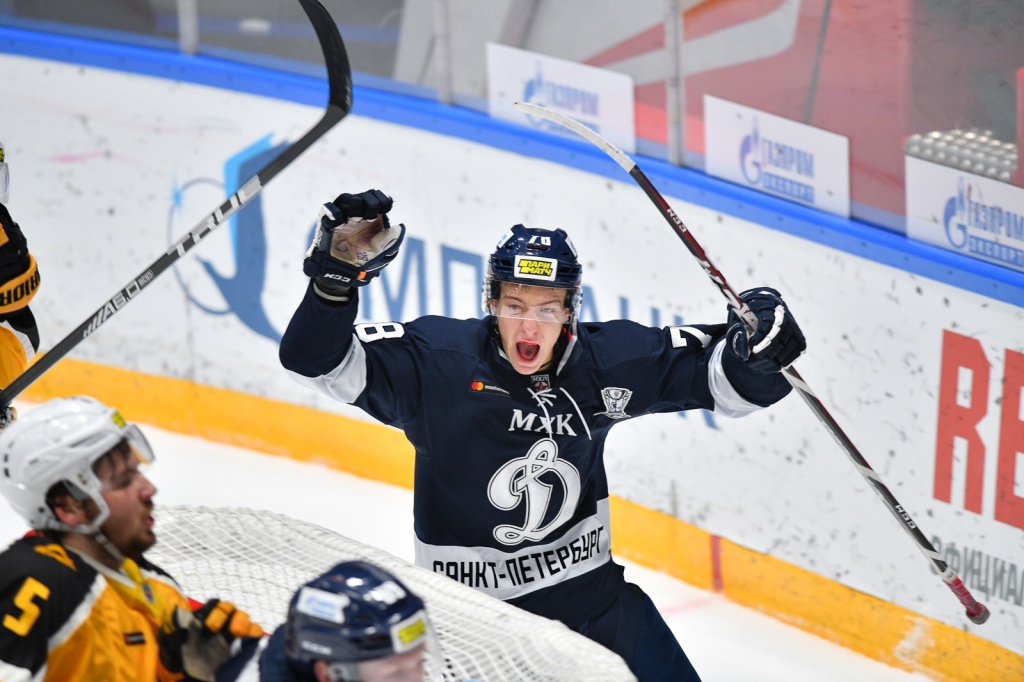 Almaz Cherepovets played their second game in St. Petersburg against JHC Dynamo. The day before Cherepovets enjoyed a win in a hard-fought game but the first period of play of Game 2 turned out to be a utter catastrophe for them. Pavel Ponosov put Dynamo in the lead just two minutes in as he sniped it just inside the post past Konstantin Shostak. Less than two minutes later Daniil Kalmykov shoved the puck into the net and forced Almaz coaching staff swap Shostak for Denis Rybalkin. Dynamo went on to score three more against him before the end of the period. Alexander Zhabreyev netted one at even strength, while Sergei Shestakov helped with a couple of his own to further improve the lead. Almaz needed a miracle.

Dynamo clamed down a bit in the second period of action and focused on protecting their lead. Alexei Vasiliev got a penalty eight minutes in and Cherepovets finally got one past Makar Chufarov. Officials needed to video review the play but Alexei Lapin’s goal counted in the end. However, Almaz weren’t going to pull off a comeback. The goal remained the only one for Evgeny Stavrovsky’s men in the game. Early in the third stanza Dynamo improved their lead to 6-1. Gleb Shaborshin restored the 5-goal margin to set the final score. With this 6-1 win Dynamo level the series with style. The two will meet again in Cherepovets.