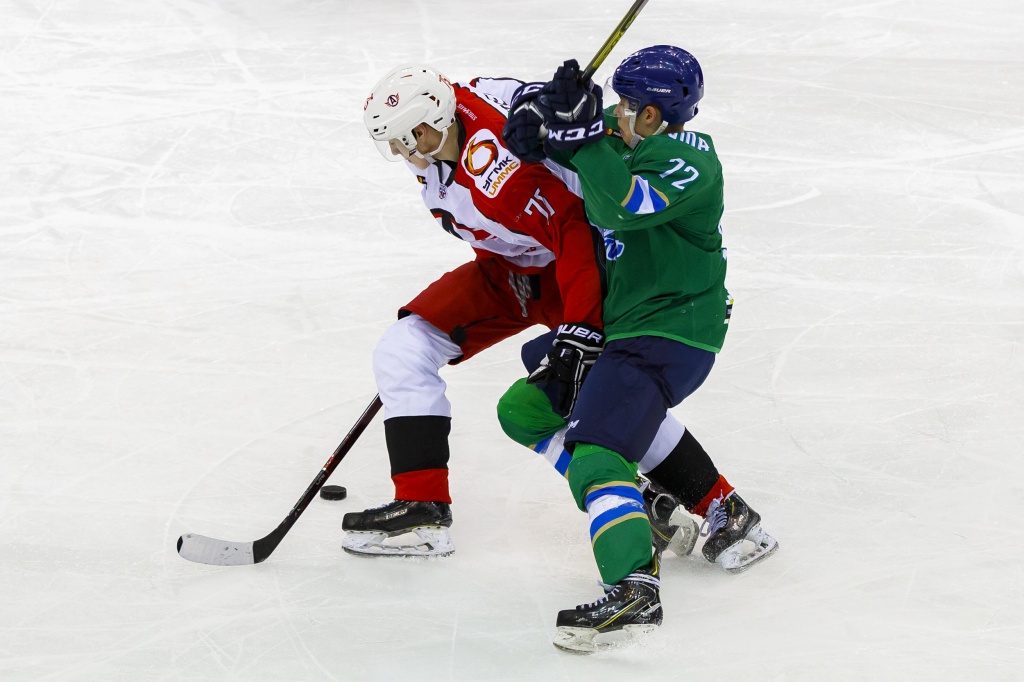 The teams opted for fast-paced offensive-minded hockey in the opening period in Ufa. Home team, who was a step away from clinching Eastern Conference top spot, did their best to move the play close to Georgy Romanov but Avto Yekaterinburg responded with scoring chances of their own, forcing Alexander Kuleshov bail out Tolpar Ufa time and again. Midway through the period Ufa got a power play opportunity but couldn’t capitalize on it. Soon after that the visitors managed to open up the scoring. With four minutes till the first intermission Vladislav Bukharov put Avto in the lead and home team couldn’t find the equalizer before the break.

Nevertheless, Rodion Amirov found the back of the net early in the second period to restore the parity. The game blew wide open after that and the teams traded goals before the period reached the halfway mark. First Vladislav Bukharov got this second of the game and just 42 seconds later Danil Aimurzin brought it back to even. Both teams continued to create a lot of scoring chances. Tolpar and Avto were picking up the pace but despite the ever-augmenting number of shots, no one could capture the lead before the intermission.

Both teams got a power play attempt early in the third period and once again it brought no dividends to either side. However, home team established a firm grip on the game after that. They were putting together great passing plays one after another but Avto Yekaterinburg were able to fend them off. The visitors managed to force overtime, which solved nothing, and the game had to be decided in the shootout. Yekaterinburg went on to win but it didn’t stop Tolpar from officially clinching the 1st spot in Eastern Conference regular season standings. 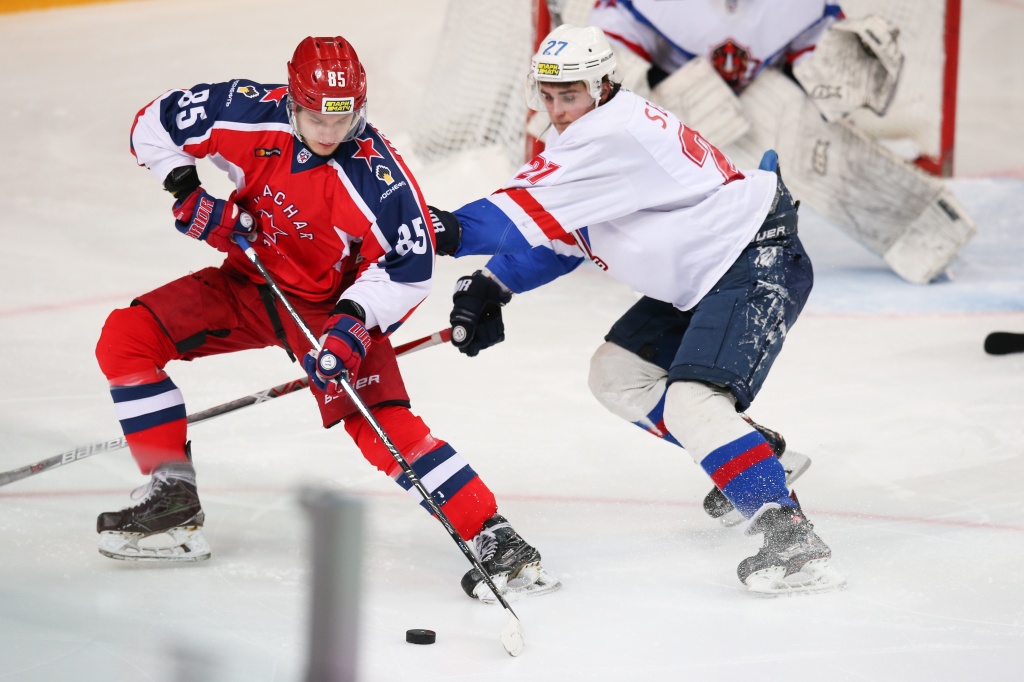 Krasnaya Armiya Moscow dominated in the opening period of play but ORG Junior Beijing were able to keep the opposition at bay. Home team managed to move the play close to Rostislav Zinovenko’s net but ORG were able to protect their goaltender time and again. As a result, despite a heavy advantage on the shot-clock, Krasnaya Armiya couldn’t find the back of the net before the intermission.

After the break ‘army men’ increased their pressure on ORG and the visitors had to put a lot of effort to cope with the situation. Moscow got their first power play opportunity of the game midway through the frame but not only weren’t they able to capitalize on it, they also conceded a goal themselves – Artyom Klavdiyev put the ‘Rhinos’ in the lead. Moscow threw everything they had at the opposition and got another man advantage late in the period. However, Beijing were able to kill it off as well and went into the third stanza with a narrow lead.

Home team did get back even early in the third period as Sergei Sulev found the back of the net. Krasnaya Armiya kept the pressure on, while the visitors fearlessly defended their net, rarely venturing out to the offensive zone. Shocking score remained right up till the final minute of regulation when Nikita Dolgopyatov finally put the red-and-blue in the lead. Krasnaya Armiya win 2-1 on home ice. 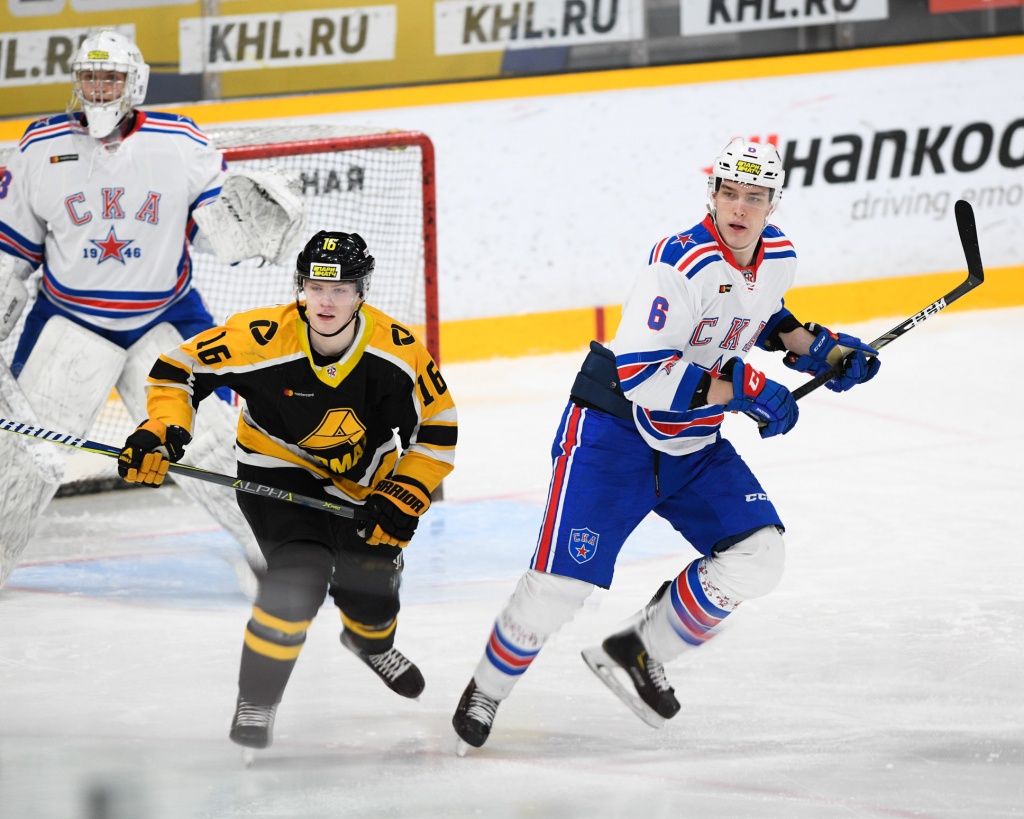 SKA-1946 St. Petersburg were more aggressive in the early minutes of the game. The visitors managed to impose their brand of hockey on Cherepovets but Denis Rybalkin was able to deal ith a huge amount of shots. ‘Army men’ gradually began putting together more dangerous passing plays and capitalized on a power play midway through the period to get in the lead – Artyom Zhuk redirected the puck into the back of the net. Home team responded almost immediately with a goal by Nikita Krutov. SKA-1946 spent the remaining of the period in the offensive zone but to no avail.

The game was tight after the intermission but seven minutes in Nikita Lukhovskoy managed to capitalize on Pavel Romashkin’s miscue to put Cherepovets in the lead. Less than a minute later the 46’s allowed another goal – Nikita Krutov got his second of the game with a help of deflection. The visitors grabbed the momentum after that but despite heavily outshooting Almaz and creating loads of scoring chances, they couldn’t get closer on the scoreboard before the intermission.

Early in the third frame SKA-1946 pulled back to within one as Daniil Barinov hit the target. After that the play moved to Almaz’s zone. Cherepovets did everything they could to protect their lead, while St. Petersburg put a lot of effort in tying it up. They came up short and suffered their 3rd consecutive loss. Almaz Cherepovets win 3-2 on home ice. 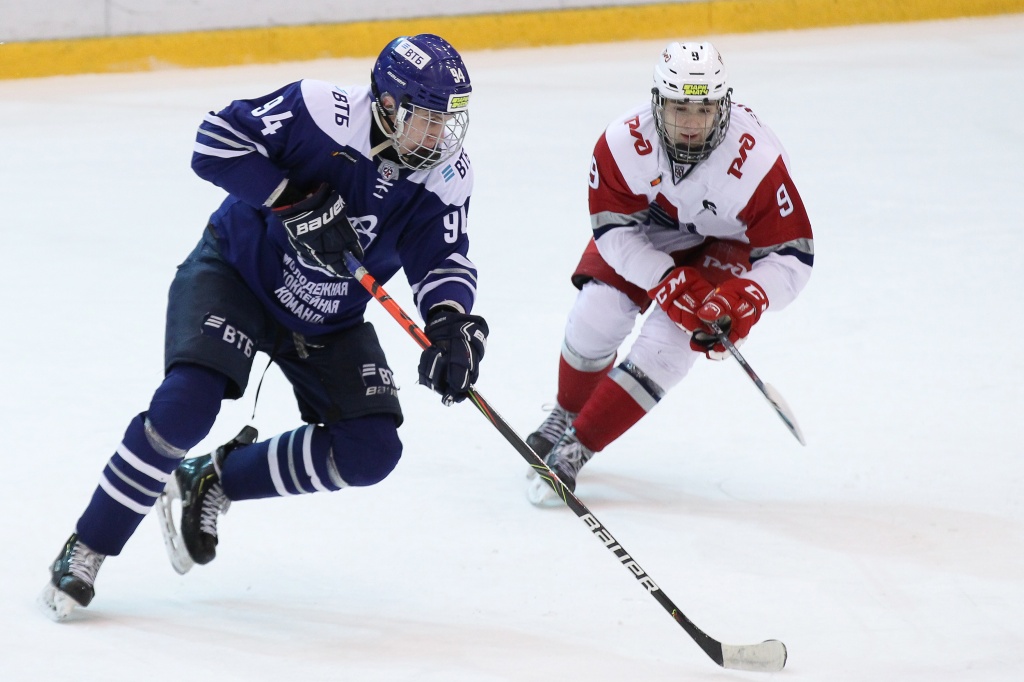 Loko Yaroslavl opened up the scoring just three minutes into the game as Alexei Goryachyov sniped one home. Soon after that JHC Dynamo Moscow allowed another goal as Ilya Chefanov found the back of the net. Home team managed to even the game out after that and began reating scoring chances at the other end of the ice. Midway through the period Bogdan Trineyev got a goal back for Moscow. Dynamo picked up the pace after that success and dominated late in the frame. Mikhail Bitsadze couldn’t convert on a penalty shot and Loko were able to deal with everything else.

Five minutes into the second period Yaroslavl restored the 2-goal advantage as Stepan Nikulin hit the twine. However, just as in the previous frame, Dynamo managed to turn it around and move the play back to Loko’s territory. Moscow created scoring chances at even strength and on power plays but couldn’t capitalize on them right till the final moments of the period. With three and a half minutes remaining to play till the intermission Yegor Bryzgalov managed to pull Dynamo back to within one. Nevertheless, the visitors were able to protect their lead.

Yaroslavl got two consecutive power play attempts in the early minutes of the third stanza and converted on the second – Yegor Samochernov beat Maxim Motorygin for the 4th time. Having restored the comfortable margin, Yaroslavl focused on defending their lead, while Dynamo did everything they could to get back even. The blue-and-white couldn’t score anything else and Loko went on to win 4-2 on the road.