Nine regular season games took place in Parimatch Junior Hockey League on February 21st. Western and Eastern conference teams continue to battle to the playoffs as well as top spots of the table. We take a look at Friday action in this review.

Taifun get their revenge as they beat Almaz on home ice 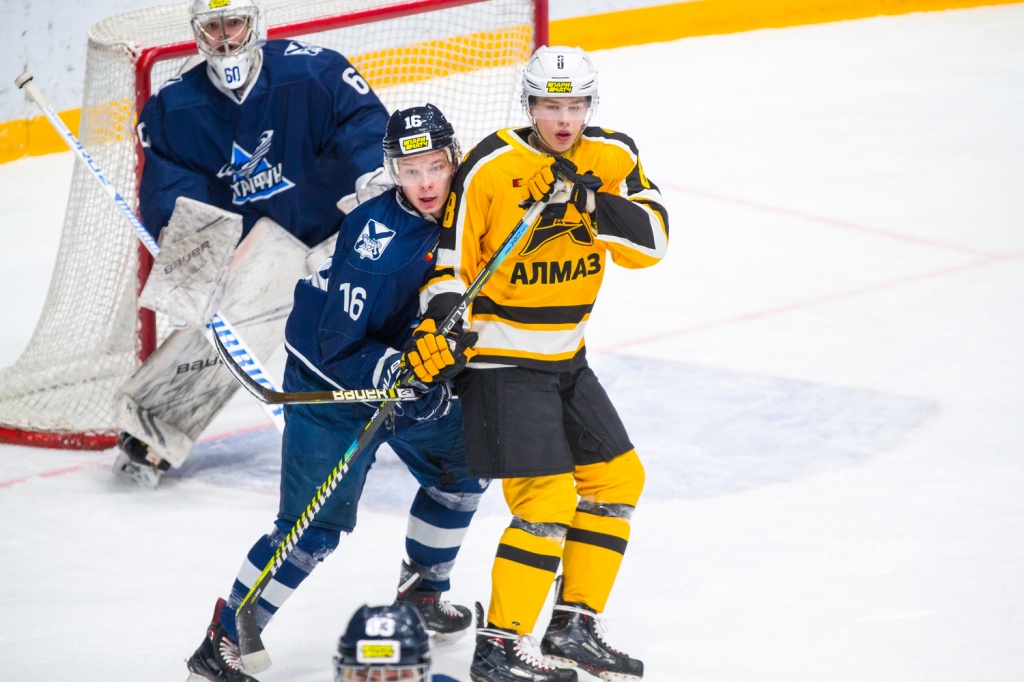 Almaz Cherepovets continued their road trip to Russia’s Far East as they faced Taifun Primorie Region in the second game of the back-to-back series. Taifun will miss the playoffs this year but they were able to beat the mighty foe. Primorie Region got down to business in the opening period as they scored two goals past Anton Vinogradov – Nikita Malukhin and Ilya Ovechkin got the markers. The game followed a similar scenario in the second period – Leonid Pasmanik and Alexander Trapeznikov got a goal each, and Vinogradov was replaced by Denis Rybalkin.

Only early in the third stanza did Vladislav Kuznetsov capitalize on a power play, putting the visitors on the board. Cherepovets scored on their next man advantage as well – Spartak Basimov found the back of the net. And yet comeback was not meant to be. Yegor Dolotov made Almaz pay for taking a penalty within the final five minutes of regulation and thus set the final score. Taifun win 5-2 on home ice. 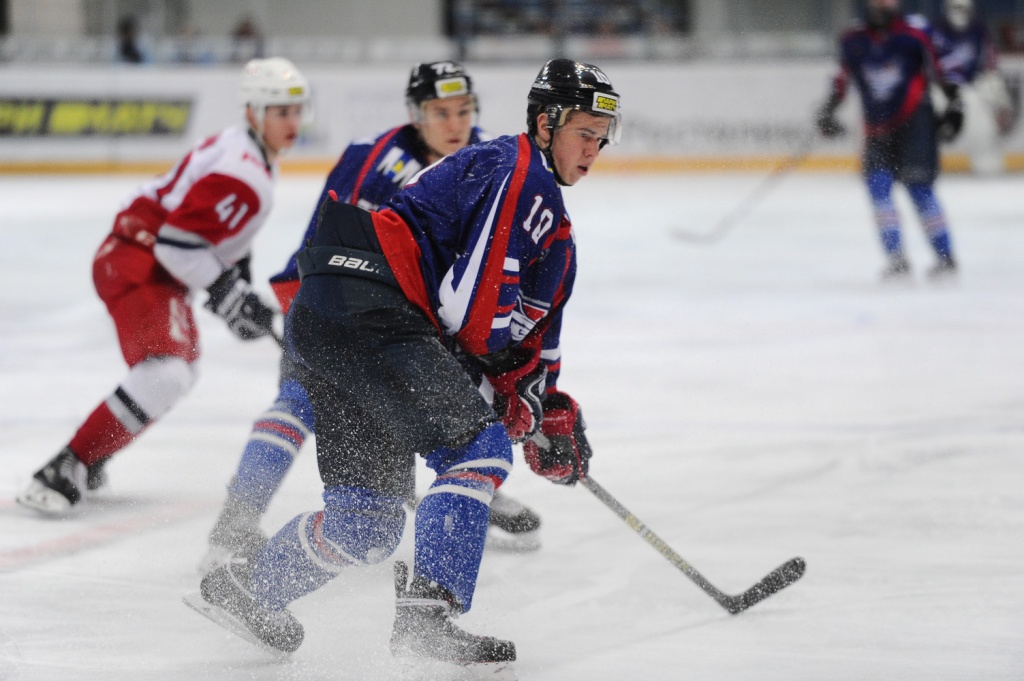 Sakhalinskie Akuly once again played hosts to Loko Yaroslavl. First period of action featured an abundance of penalties. Yaroslavl took almost twice as many shots as the opposition but nothing went in. ‘Railway men’ finally opened up the scoring only midway through the second period, converting on Kirill Kuzmenko’s penalty – Stepan Nikulin sniped it home. The fans saw the next goal seven minutes into the third period and unfortunately for the locals it was Sakhalinskie Akuly that conceded it.

Danila Dyadenkin, who recently developed a habit of not leaving the ice without a point, scored the second goal for the visitors. The ‘Sharks’ got their only goal of the game from Yegor Ageyev. But less than a minute after that Mikhail Smirnov restored the 2-goal lead for Yaroslavl and his marker proved to be the last. Loko take it 3-1 and enjoy their 15th consecutive win.

Tolpar get 4 blowout wins in a row 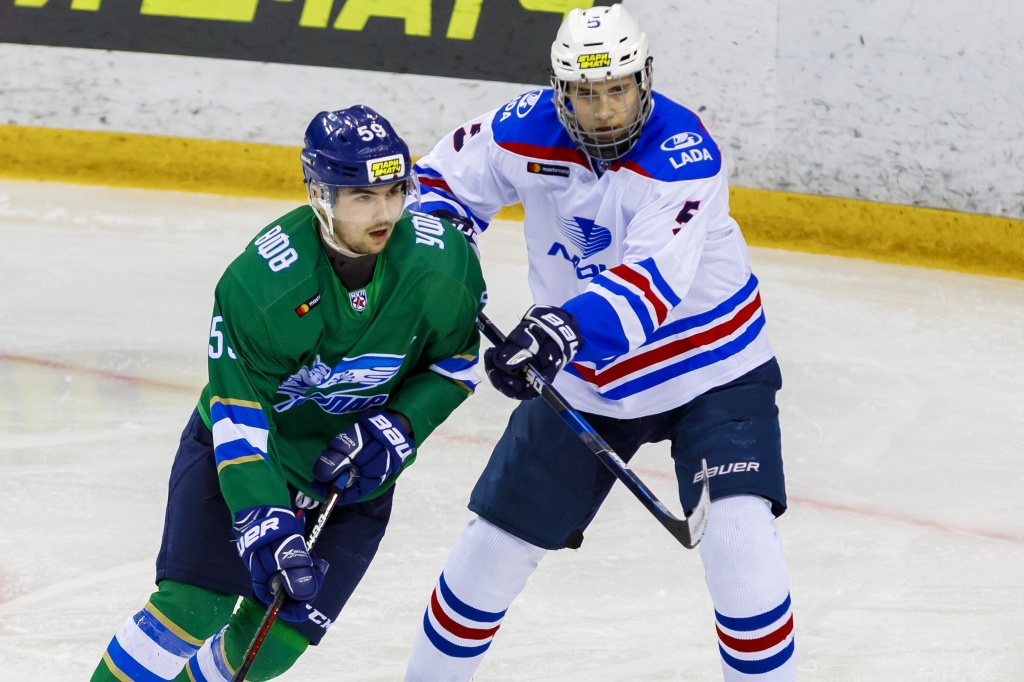 Top team of the Eastern Conference Tolpar Ufa defended the ice against Ladiya Togliatti, who play just for their pride at the point of the season. Ufa got on the board ten minutes in – Vladimir Bakanin found the back of the net. Home team expanded their lead in the second frame. Bakanin got his second of the game, while Andrei Kuznetsov and Rodion Amirov got a tally each. Togliatti gave in to their emotions and they instigated a mass brawl, which led to five players getting penalties.

Only after Bakanin completed his hat-trick did the visitors respond – Milan Zinatullin got a goal back for Ladiya. That marker proved to be the only one Togliatti could get in this one. Tolpar managed to squeeze in a few more tallies before the final buzzer – Nikita Goloschapov and Bogdan Ponomarenko hit the target. Tolpar continue to steamroll over their opponents as they win 7-1 on home ice. 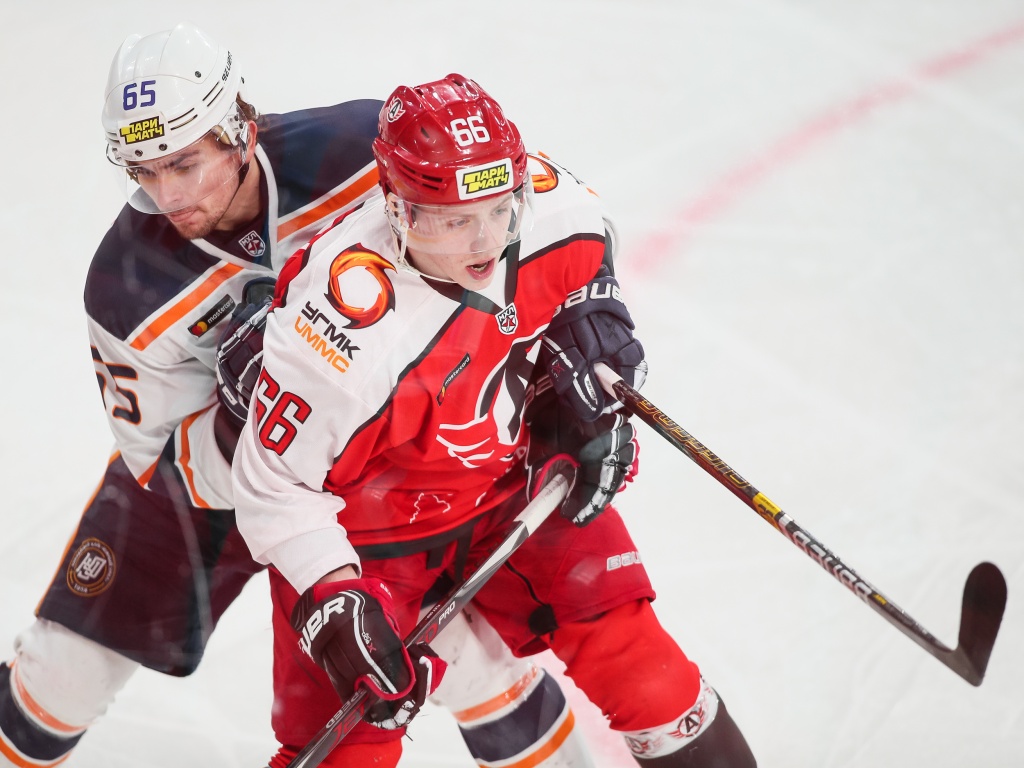 However, they weren’t going to make the same mistake twice and blew past the opposition in the second game of the back-to-back series. Home team scored two goals in the opening period of play – Daniil Valitov and Ilya Loza got the tallies. Only after Loza got his second of the game and Ilya Ovchinnikov added another one to the lead did Orenburg respond with a goal by Timur Kasmukanov.

Home team went on to score two more goals before the second intermission. Maxim Karpushin got one of them and Loza completed his hat-trick. Five minutes into the third stanza Karpushin got his second of the night as he buried the rebound on Anton Chufarov’s shot who hit the post. Maxim Sedov scored Avto’s 8th goal of the game and with eight seconds remaining to play in regulation Daniil Katayev set the final score. Avto enjoy a blowout 8-2 win and will compete in Kharlamov Cup Playoffs this spring. 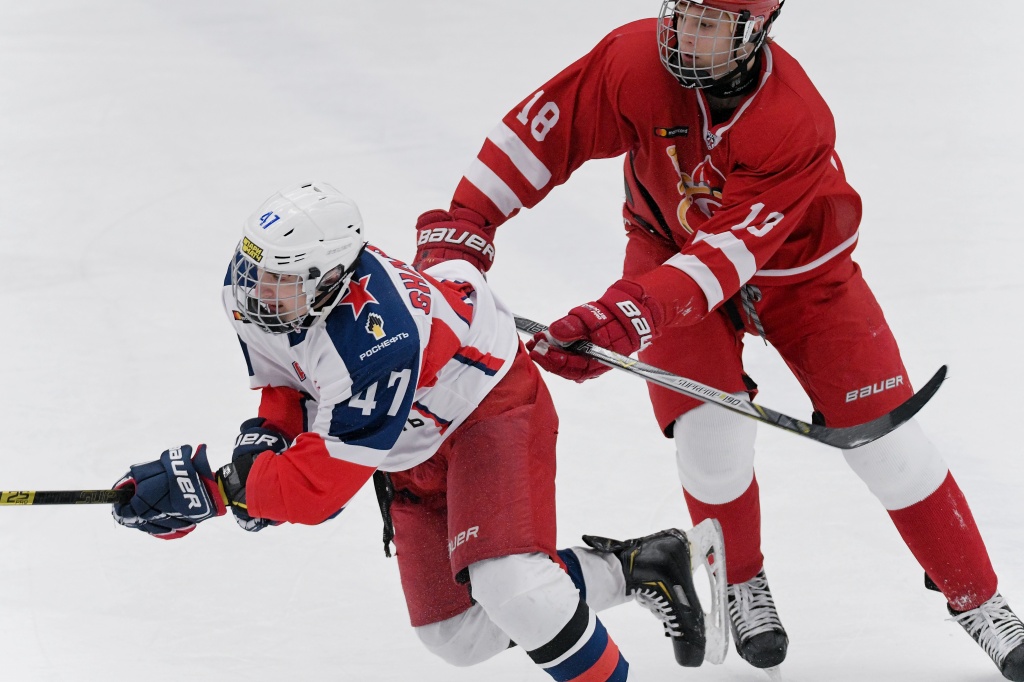 ‘Army men’ dominated throughout the game but managed to get on the board only midway through the second period. Prokhor Poltapov’s tally proved to be the game-winner. Matvei Kiselyov stopped all 18 shots he had to face en route to a shutout win, while Dmitry Zugan set the final score later in the second frame.

Russkie Vityazi lose 2-0 and see their winning streak come to an end, failing to rise to the playoff zone. 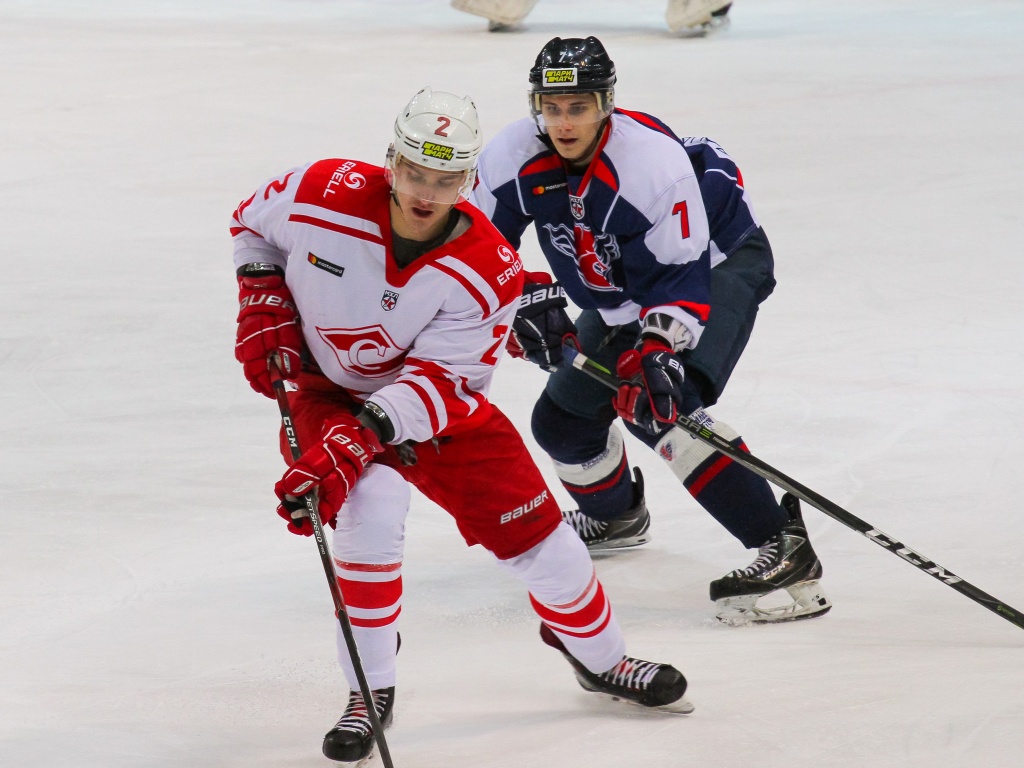 Home team won the first period of play. Just seven minutes into it Grigory Babushkin opened up the scoring. Midway through the second frame JHC Spartak Moscow got the momentum on their side and brought it back to even. Vladislav Churkin capitalized on a power play opportunity. The fans weren’t treated to any goals after that and the game had to be decided in the shootout. Denis Popov stopped all five attempts, while Pavel Kanayev couldn’t stop Ildar Kashafetdinov, who got ‘Soviet Wings’ their second consecutive win in the back-to-back series against their Moscow rivals.

Krylia Sovetov Moscow got a vital win and are now just two points out of the playoffs. Spartak lose but leave Setun with a point. Vladimir Tyurikov’s men are now four points away from the 9th place in the Western Conference standings. 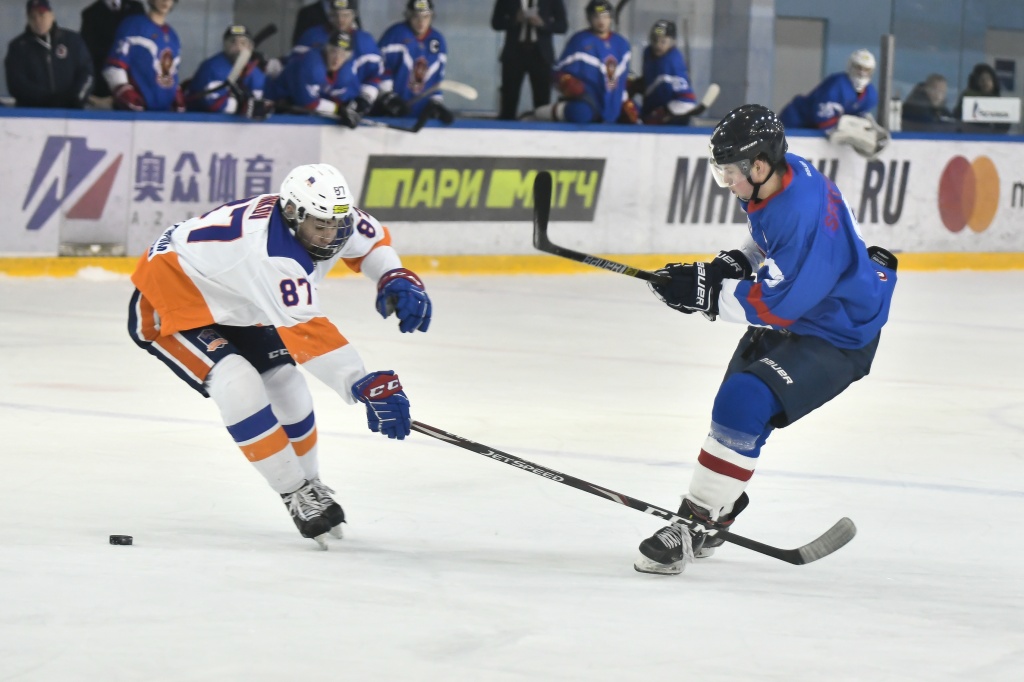 SKA-Varyagi St. Petersburg got off to a good start in the clash of Western Conference underdogs. By midway through the second frame Yuri Dobryshkin’s men established a comfortable 3-goal lead. Grigory Kuzmin beat Rostislav Zinovenko in the opening period of play, while in the second stanza Kirill Tankov made the opposition pay for a clumsy play as he scored a shorthanded goal, followed by Ilya Ivantsov’s power play tally.

Evgeny Yesaulov swapped Zinovenko for Vladislav Pakin after that and the latter didn’t let in anything else. His teammates picked up the pace in the third period and were close to pull off a comeback. First Prokhor Korbit solved Nikita Melnichuk and with a minute remaining to play in regulation Junior Hockey League rookie Vladislav Ruzin brought home team back to within one as he scored his first career goal. Chinese team failed to find the equalizer on their final push. With three seconds till the final buzzer Ilya Ivantsov scored on the empty net.

Atlant beat Kapitan on the road 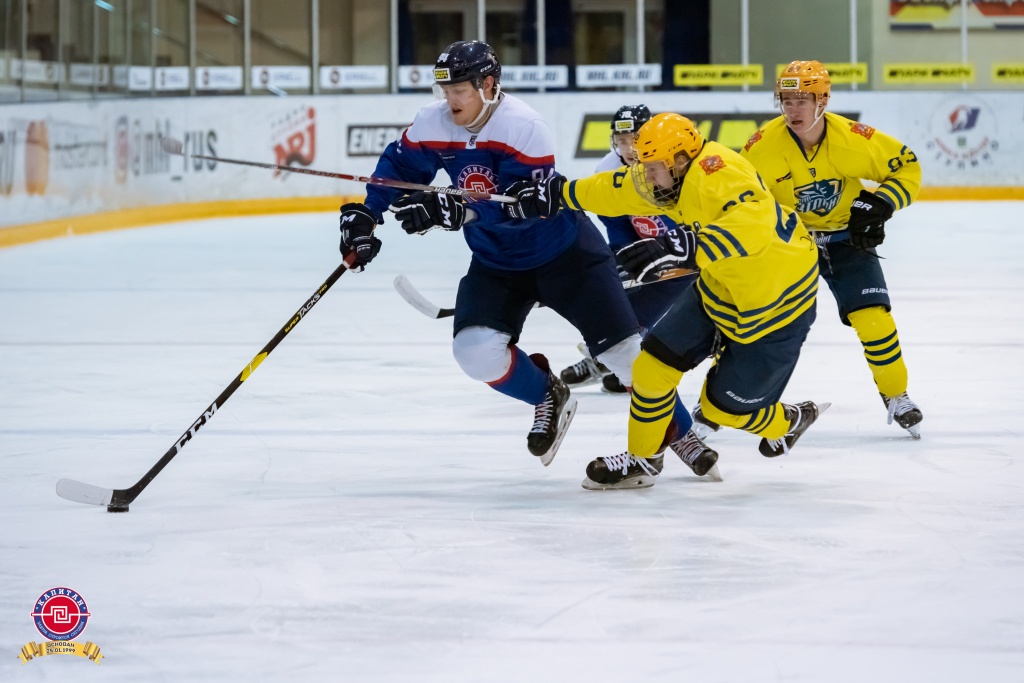 The teams were even in the first half of the game. Atlant Moscow Region had the lead twice but HC Kapitan Stupino were able to get back even on both occasions. The visitors did better afterwards. Nikita Gerankin and Matvei Kokovin got a tally each just four minutes apart and gave their team a comfortable lead.

Grigory Nesvetayev further improved the margin in the third stanza. Kapitan got back in the game as Alexei Rybin found the back of the net but Stupino failed to force overtime. The game ended with a mass brawl, which led to 89 penalty minutes. 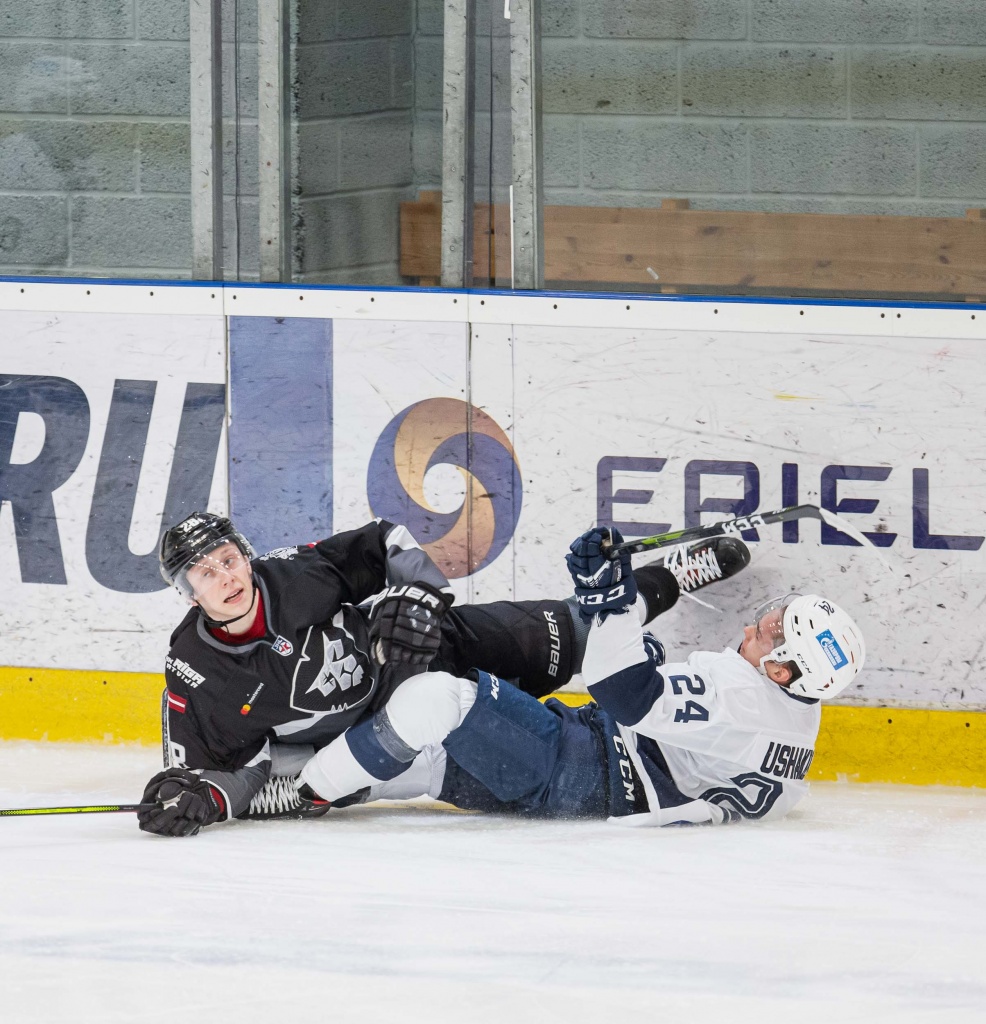 In each of the three period the teams exchanged goals in quick succession. Antons Trastasenkovs opened up the scoring in the opening frame capitalizing on a power play but just 90 seconds later Pavel Ponosov brought it back to even.

The teams swapped roles in the second stanza. Daniil Kalmykov scored a shorthanded goal but a minute later Antons Sinegubovs restored the parity. Denis Fjodorovs game HK Riga another lead just 24 seconds into the third period. But JHC Dynamo St. Petersburg were quick to respond – less than a minute later Alexander Zhabreyev made it a 3-3 hockey game.

Vladislav Vlasov’s marker proved to be the game-winner as he gave St. Petersburg a lead with just five minutes remaining to play in regulation. Yegor Bashkarov called timeout, which helped his men to survive Riga’s final push. Latvian team spent the last moments of the game in the offensive zone and yet failed to find the equalizer.

With this 4-3 loss on home ice HK Riga stay 9th in the Western Conference. Should Russkie Vityazi and Krylia Sovetov win their next games, Raimonds Vilkoits’ team will be rendered out of the playoffs.