Six regular season games took place in Parimatch Junior Hockey League on February 20th. Several teams from both conferences had a chance to clinch playoff spots, while direct competitors went up against each other in the West. We take a look at Thursday action in this review. 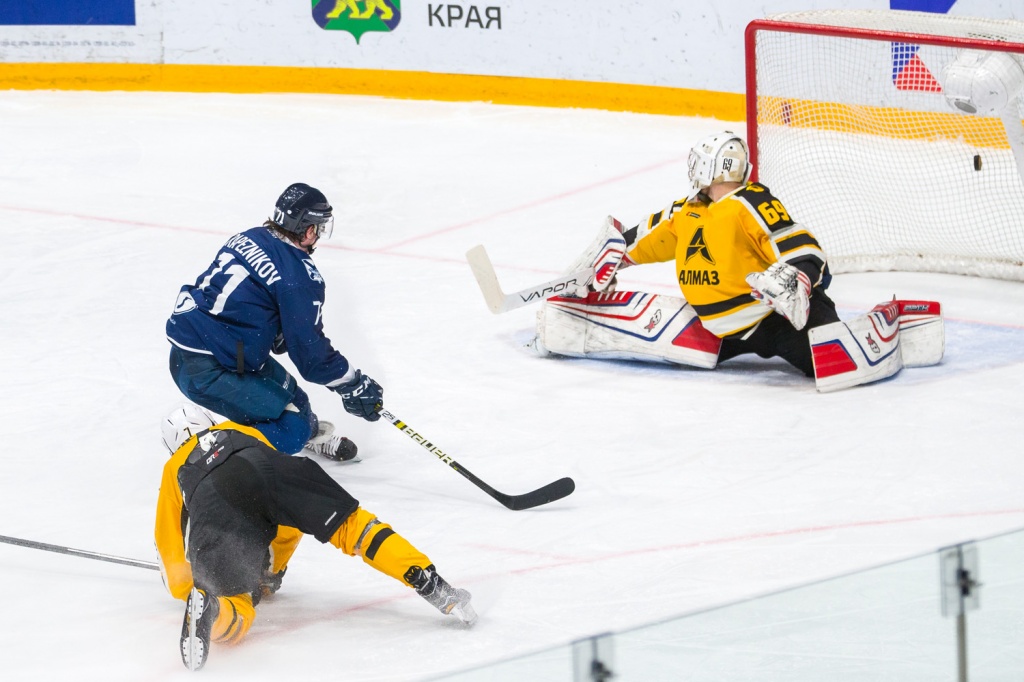 The gameday kicked off in Vladivostok as Taifun played hosts to Almaz Cherepovets. The teams were even in the first half of the game and traded goals. Almaz opened up the scoring with a power play marker – Damir Bilyalov got the tally. Yegor Dolotov went on to tie it up. Another goal exchange occurred after the intermission. Alexander Trapeznikov put Primorie Region in the lead, while Ilya Rogov restored the parity on the scoreboard.

Key moment of the game came late in the second period of play. Stepan Ignatov and Maxim Nevolin gave Cherpovets a 2-goal lead and Taifun were unable to make up for it. Danila Barabash brought home side back to a narrow margin but the visitors had the last word in this one – Nevolin scored his second of the game with just a few seconds remaining to play in regulation and secured the win for Cherepovets. Almaz win 5-3, while Taifun suffer their 12th consecutive loss. 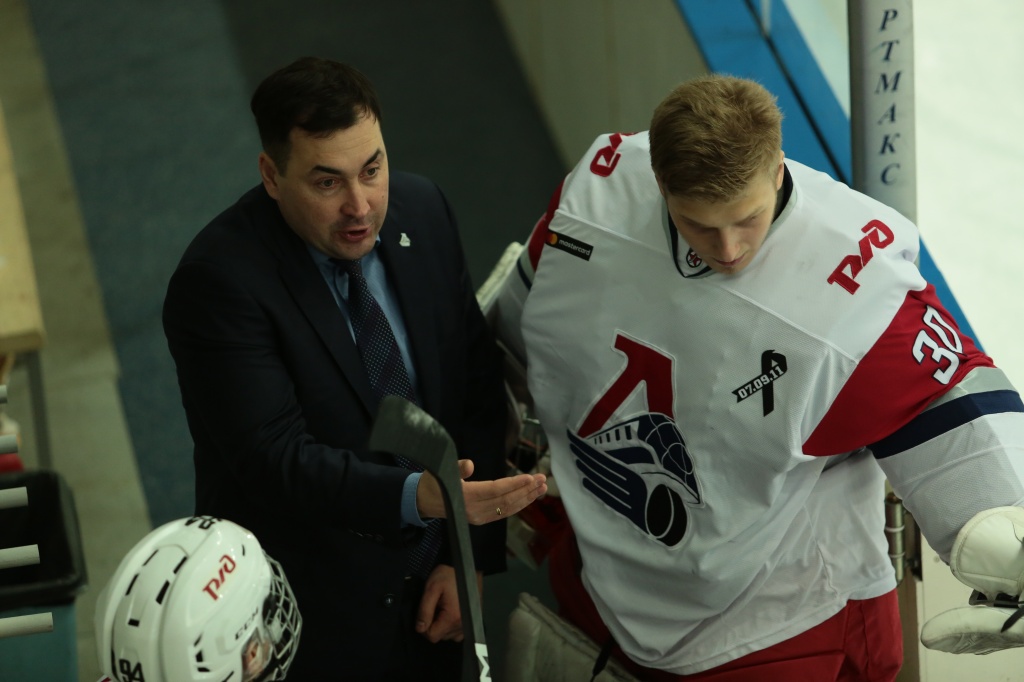 Another game was held in Russia’s Far East on Thursday. Sakhalinskie Akuly faced Loko Yaroslavl. ‘Railway men’ had the momentum on their side throughout the game but it was the home team who got on the board first. Five minutes into the first period of play Yuzhno-Sakhalinsk top-scorer Ruslan Akhmetvaliev made Yegor Gorshkov pay for skating too far from the crease and finished off the counter-attack with a goal.

The visitors responded just two minutes later as Stepan Nikulin capitalized on a power play attempt. Yaroslavl got in the lead by midway through the period. Grigory Kolupayev couldn’t handle Yegor Manin, who leads Loko in points.

Loko scored three more goals in the following 40 minutes. Danil Gutik and Danila Dyadenkin got a marker each, while Yegor Manin scored his second of the game. Ruslan Akhmetvaliev also got his second late in regulation but it changed nothing in the big picture.

Loko prevail 5-3 for their 14th consecutive victory. Sakhalinskie Akuly will face Loko again in the second game of the back-to-back series, which is going to be their last chance to win in front of their home crowd. Yuzhno-Sakhalinsk, who had lost all hope of making the playoffs, will play their last four games on the road.

Sarmaty blow past Avto on the road 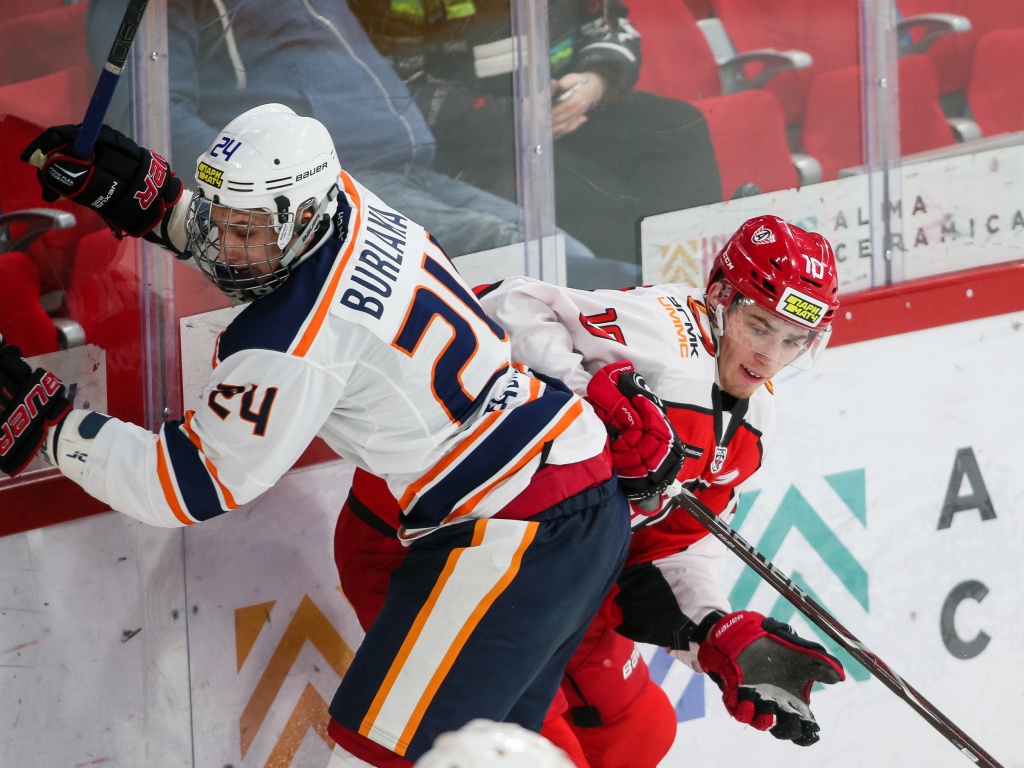 After two huge losses from Tolpar Ufa Sarmaty Orenburg lost their last hope of making the post-season this year and came to Yekaterinburg with no tournament motivation. As for Avto, they a playoff spot almost in their pocket – even one point would secure a Kharlamov Cup berth for Vitaly Solovyov’s men.

The visitors dominated in the early minutes of the game. Sarmaty took twice as many shots as the opposition and scored two goals past Georgy Romanov. Four minutes in Alexei Barkhatkin jammed it into the net, and four minutes later he scored his second of the game, finishing off a quick transition play shorthanded. Orenburg came out hard for the second period as well. Just three minutes into it Ivan Ukolov took a screen-shot from a face-off dot and whistled it over the goaltender’s shoulder.

Home team coaching staff had to swap their netminders. Vladimir Sartakov went into the cage and looked solid but couldn’t stop two shots in the third stanza – Vladimir Ipatov and Artyom Rusakov further improved the lead. All Yekaterinburg could get in this one were two consolation goals. Midway through the third period Ilya Loza tipped it into the net from the slot, stripping Anton Borodkin off a shutout and late in regulation Yuri Zhuravlyov scored another one.

With this 5-2 win Sarmaty bounce back from blowout losses to Tolpar and delayed last season’s runners-up clinching a Kharlamov Cup playoff spit for at least another game. 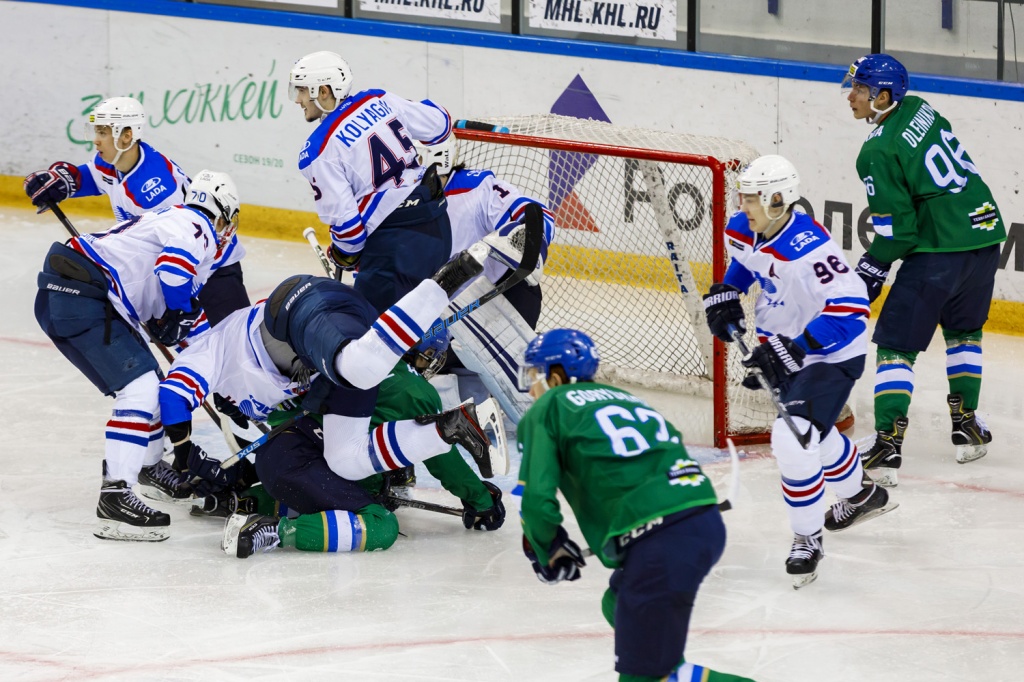 The most high-scoring game of the day took place in Ufa where Tolpar, who lead the Eastern Conference, soared past Ladiya Togliatti. Mikhail Vasiliev’s men established a firm grip on the game in the opening period. Rodion Amirov, who played his first game after recovering from an injury, scored the first goal of the game, while Daniil Aimurzin doubled the lead for the home side.

Ufa dominated in the following 40 minutes of action. Amirov went to score a goal in each of the periods, completing a hat-trick, while Vladimir Bakanin, Tolpar top-scorer Yegor Suchkov, Andrei Kuznetsov, Timur Valeyev and Filipp Permyakov got a marker each.

Artyom Zabrodin was between the pipes for Ladiya Togliatti in the first half of the game and was subsequently replaced by Igor Kulakov. Alexander Kuleshov stopped all 26 shots he had to face for his 7th shutout of the year. Tolpar extend their winning streak to five games and feel even more comfortable on top of the Eastern Conference. The gap between Ufa and Omskie Yastreby is now three points.

Dynamo get even in St. Petersburg, clinch the playoffs 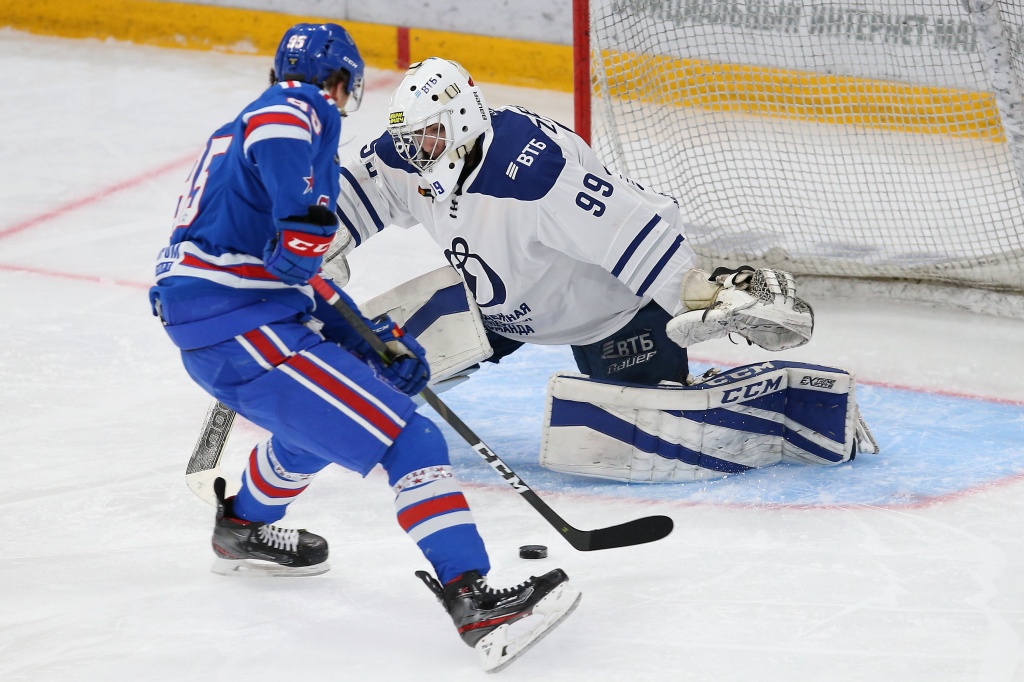 After the loss the day before JHC Dynamo Moscow coaching staff made adjustments to their roster. Vladimir Zherenko got the nod, while defenseman Mikhail Semeneko was dressed for the game – he was selected the top player in his position last week in Junior Hockey League.

Just as the day before it was the visitors who opened up the scoring. Early into the second period of play Yegor Bryzgalov stole the puck shorthanded, raced down the ice for a breakaway and slipped it past Dmitry Nikolayev. The blue-and-white scored another one on a power play – after a shot from the blue line the puck bounced off the wall straight to the tape of Dmitry Zlodeyev, who put it between the wickets of Nikolayev. ‘Army men’ also managed to capitalize on a man advantage. Maxim Krovyakov finished off a neat passing play midway through the period to reduce Moscow’s lead to a minimum.

There were almost no scoring chances in the third stanza. The teams combined for just 11 shots. A few minutes after intermission Zlodeyev scored his second goal of the game to restore the 2-goal margin and Dynamo went on to hold on to it.

Dynamo win 3-1 and get even in St. Petersburg. Moscow also clinched the playoffs for the first time since 2015. SKA-1946 lost their last home game of the regular season and saw their winning streak come to an end. 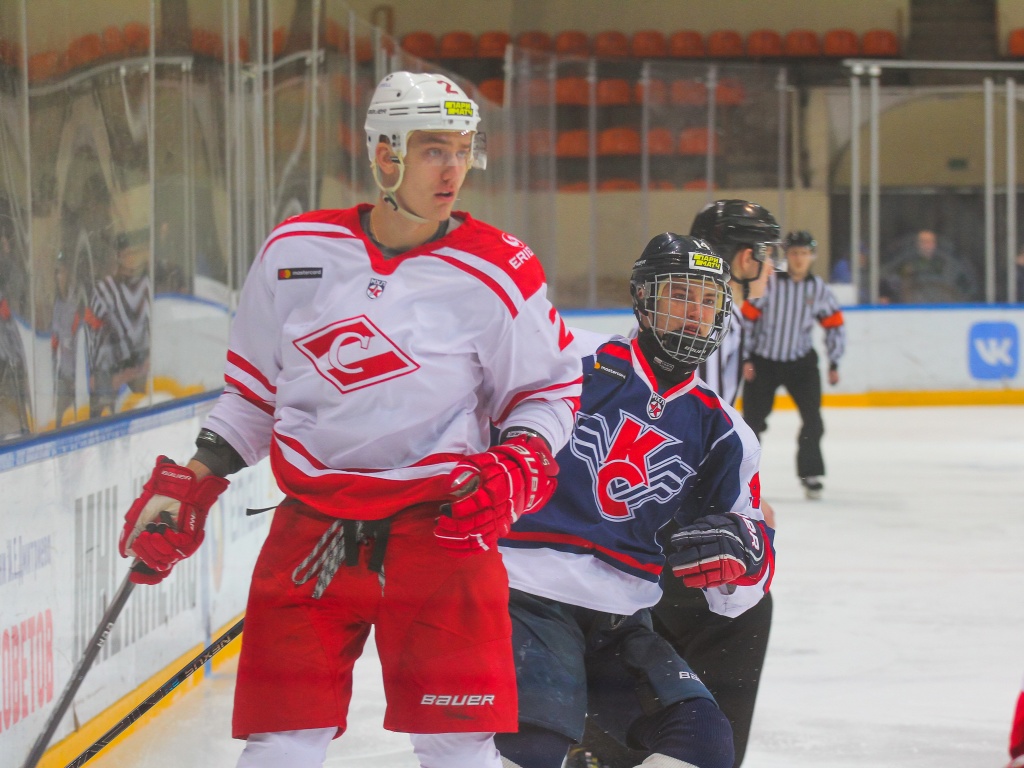 The gameday came to an end in Setun, Moscow as two direct competitors in the race for the playoffs went up against each other. JHC Spartak Moscow, who are currently 7th in the Western Conference, haven’t guaranteed themselves a playoff berth battled against Krylia Sovetov Moscow, who are quite a few points out of the post-season. Both teams opted for caution early in the game and the first goal was scored only early in the second stanza. Sergei Odinokov solved Dmitry Kulikov to put ‘Soviet Wings’ in the lead. Yegor Maklozyan restored the parity on the scoreboard before the intermission.

Key goal of the game was netted by Krylia Sovetov top-scorer Evgeny Pogonchenkov. Midway through the third stanza the forward put home side in the lead. Alexander Trofimov’s men were able to protect the narrow lead and walked away victorious.

With this 2-1 success Krylia Sovetov end their 5-game losing streak and gain vital points in the race for the playoffs. ‘Soviet Wings’ will conclude their regular season with the second game of the back-to-back series with Spartak. Whether or not the team makes the playoffs depends on their result in the final bout.