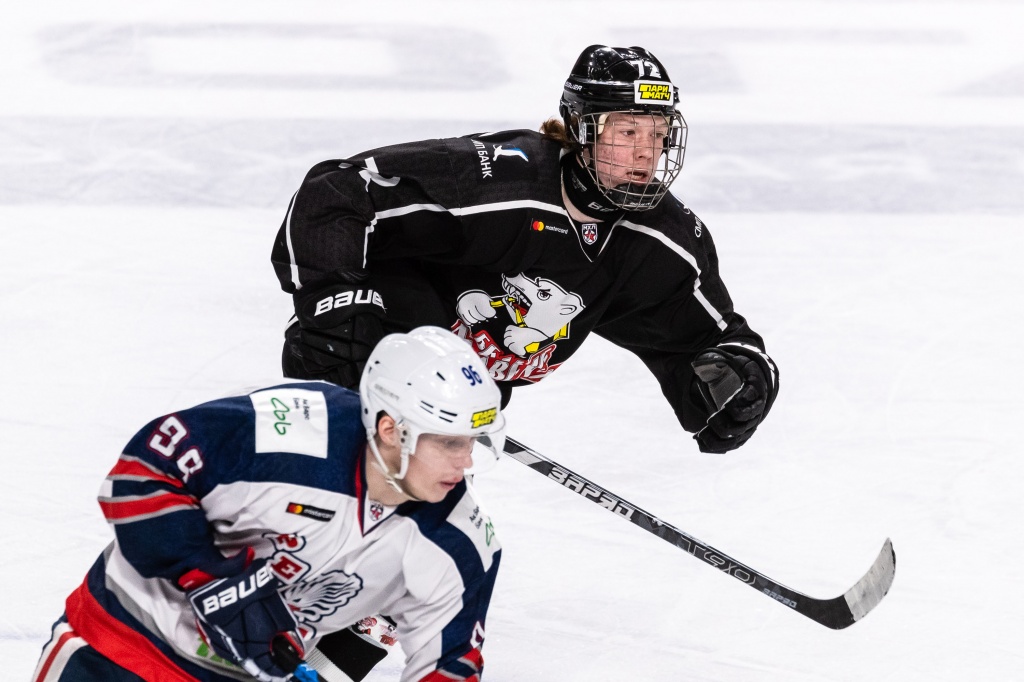 Reaktor Nizhnekamsk had the momentum on their side in the opening few minutes of the game but then Belye Medvedi Chelyabinsk turned it around and got in the lead midway through the frame as Konstantin Lukin found the back of the net. ‘Polar Bears’ kept the pressure on, sprayed Azat Shakirov with shots and doubled their lead soon enough – this time Alexander Abramov hit the twine. The visitors picked up the pace after that with two and a half minutes remaining to play in the period got a goal back – Dinar Gibadullin got the marker. However, home team went on to score twice in a span of just 18 seconds – Mikhail Rolgizer-Goryunov and Demid Mansurov gave Belye Medvedi a 4-1 lead.

Arkady Aksyonov further improved the margin in the early moments of the second period. The visitors responded two minutes later with a tally by Vladislav Gavrilov. Nizhnekamsk grabbed the momentum after that and began creating a lot of chances against Viktor Selivyorstov. However, Chelyabinsk goaltender was up for the task and made several huge saves. As a result, despite the abundance of scoring chances the visitors couldn’t tighten the gap on the scoreboard. Belye Medvedi went into the third period with a comfortable 3-goal lead.

They improved it to a 5-goal lead early in the third stanza. In the first four minutes of the period Artyom Shvarev and Konstantin Lukin got a tally each. The visitors once again responded with a goal of their own – this time Ilya Paranin got the marker. Reaktor picked up the pace once again, doing their best to turn the game around but they couldn’t get any closer. Daniel Butsayev got another goal back on a power play late in regulation but it didn’t prevent Belye Medvedi from enjoying a solid 7-4 win. 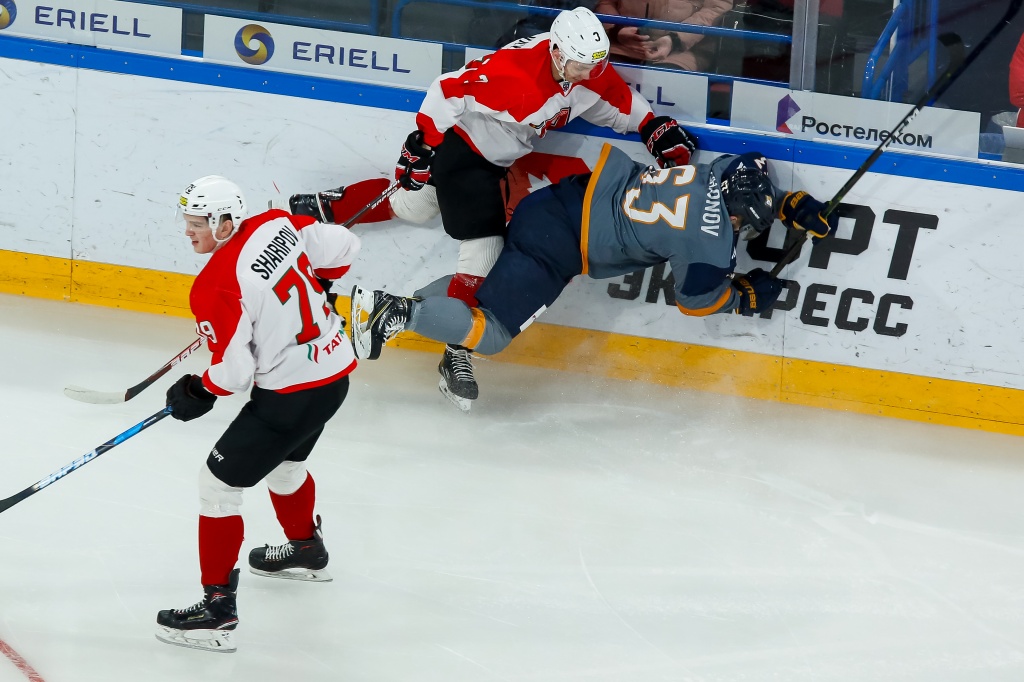 Early in the game Stalnye Lisy Magnitogorsk put together several good offensive rushes, one of which led to a goal by Edgar Varagyan. The game evened out after that and it was Sputnik Almetyevsk who got more aggressive midway through the frame. They managed to pin Magnitogorsk to their net but Nikita Kamyshnikov made several huge saves. Late in the period ‘Steel Foxes’ moved the play away from their zone and went to the dressing-room leading 1-0 after 20 minutes.

Almetyevsk found themselves down a man after the intermission, which allowed Stalnye Lisy improve their lead – Yuri Platonov found his target. Sputnik got a 2-man advantage after that but they couldn’t capitalize on it. Almetyevsk looked more aggressive but home team was able to fend them off. Stlanye Lisy scored two more goals late in the period – Yuri Platonov and Timur Khairullin got the markers.

Sputnik came out hard for the third stanza, doing their best to salvage the game and midway through the period Maxim Vyatkin finally solved Magnitogorsk goaltender. Almetyevsk threw everything they had at Stalnye Lisy trying to get back in the game but late in regulation Yuri Platonov completed his hat-trick to put it out of reach. Mikhail Fadeyev scored another goal for Sputnik but it was in vain. Stalnye Lisy win this one 5-2. 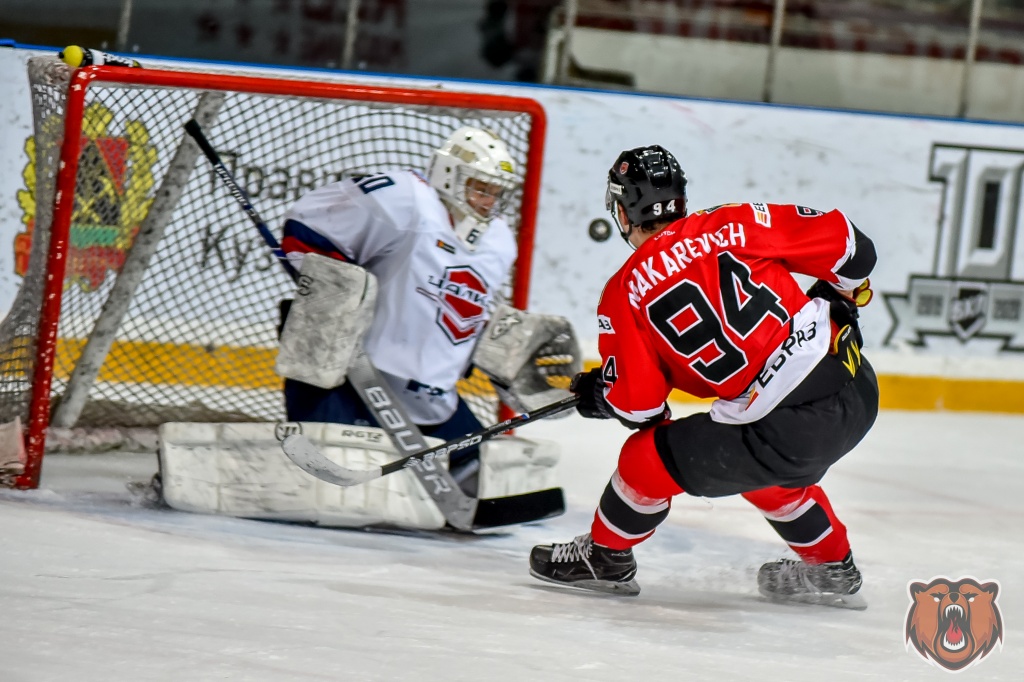 Chayka Nizhny Novgorod went down a man early in the game and Kuznetskie Medvedi were able to capitalize on it – Gafar Satarov put the ‘Bears’ in the lead. Nizhny Novgorod gradually took the momentum from the opposition. They managed to turn it around late in the period. First Gleb Petrov tied it up and soon after that Maxim Tsybin put Chayka in the lead. Home team did their best to restore the parity on the scoreboard before the period expired but Chayka kept them at bay and went to the dressing-room with a narrow lead after 20 minutes of play.

However, Gafar Satarov converted on a power play early in the second period for his second of the game. The teams remained leveled up till midway through the frame. Nizhny Novgorod increased the pressure and scored twice – Yegor Alexeyev and Maxim Rastvorov got a tally each. Home team rushed down the ice trying to deal with their predicament and right before the intermission Bulat Zagidullin got a goal back for Kuznetskie Medvedi.

Home team spent most of the third period in the offensive zone. Novokuznetsk eyed to get the equalizer, while the visitors played with caution defensively and menaced the ‘Bears’ with a series of counter-attacks. The game stayed close up till late in regulation. In the final few minutes of the period the ‘Bears’ got a power play but Mark Pavlikov scored on the empty net to secure the win for Nizhny Novgorod in a hard-fought game. 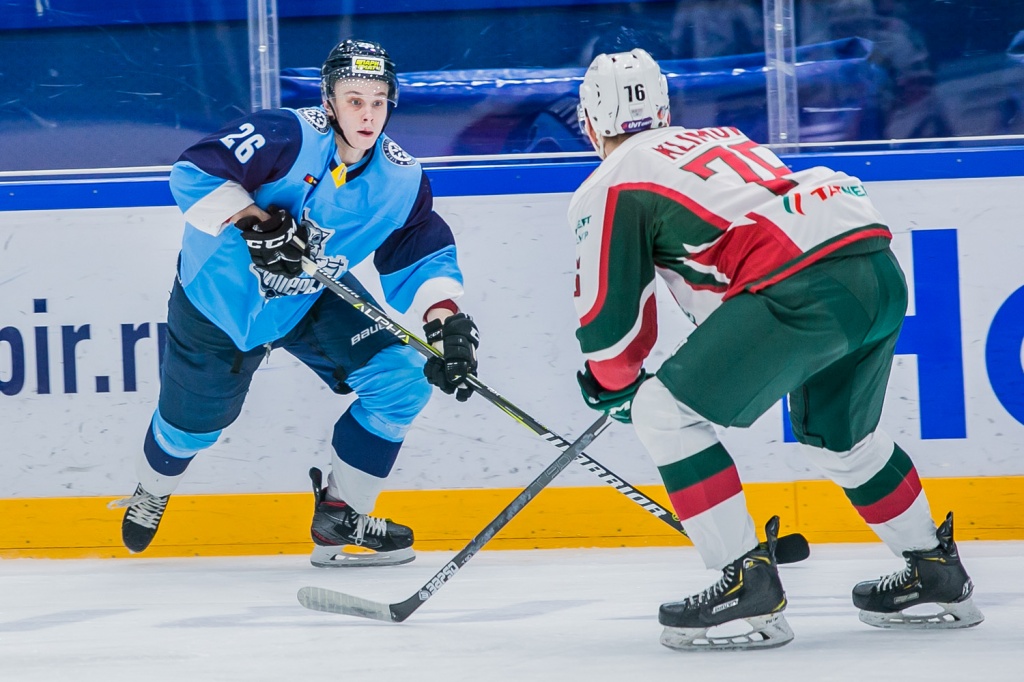 Sibirskie Snaipery got off to a great start in the second game of the back-to-back series against Irbis Kazan as they managed to score three goals on Vladimir Mosin in the opening 10 minutes. First Dmitry Ovchinnikov sniped one home, then Mikhail Konkov doubled the lead and two mintues later Andrei Borisyuk improved the lead to 3-0. Kazan swapped their goaltenders and tried to get back into the game. They got the momentum on their side but couldn’t get anything past Vladislav Shcherbakov. As for Novosibirsk, who focused on defense, they relied on counter-attacks. One of them led to their fourth goal of the game – Sergei Dubakin concluded first period scoring as he made it a 4-0 hockey game.

Kazan picked the pace in the second period, doing their best to salvage the game. Sibirskie Snaipery kept allowing scoring chances but they were able to deal with them. Home team got a power play opportunity later in the period but Kazan scored their first goal of the game shorthanded – Denis Komkov found the back of the net. They got another marker almost right after that – this time it was Gleb Lachinov who put it in. As a result, Irbis headed to the third period down by just two.

Kazan held nothing back in the third frame. Home team pulled back and managed to keep the opposition at bay in the first half of the period. However, the visitors brought it back to a 1-goal differential a little later as Ruslan Galimzyanov hit the target. Kazan went all-in, got a power play opportunity and late in regulation Pavel Kupchikhin forced overtime with a snipe. And yet it was Sibirskie Snaipery who walked away victorious as Sergei Dubakin scored the game-winner. 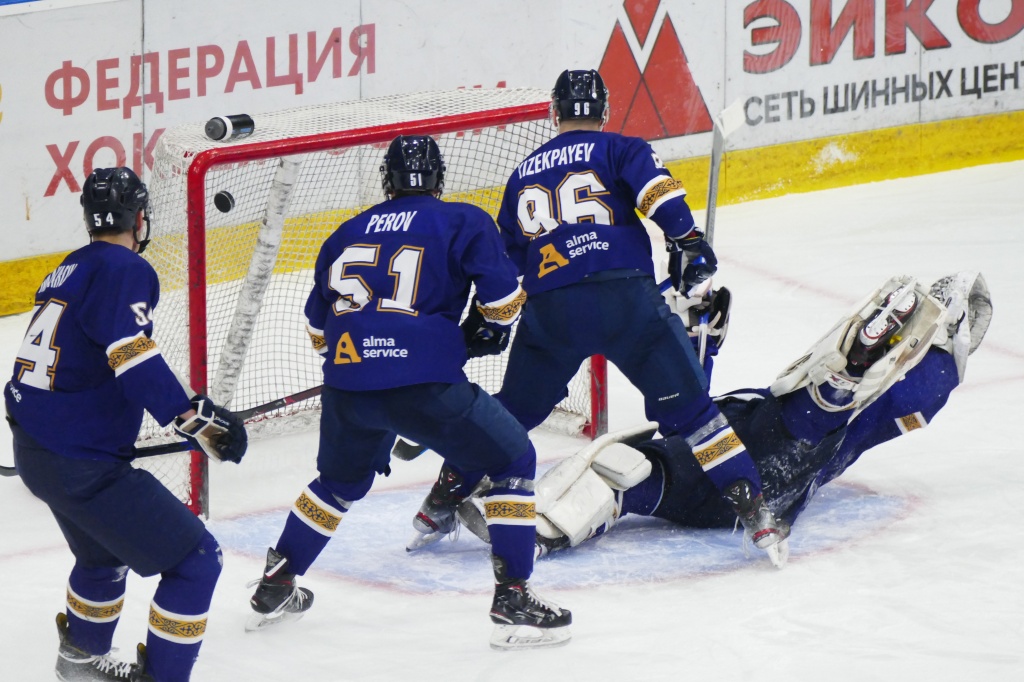 Khanty-Mansiysk got in the lead three minutes into the game as Kirill Rudenko hit the twine. The visitors stayed aggressive and soon enough Nikita Chusovitin doubled the lead for the ‘Mammoths’. Having established a comfortable lead, Mamonty Yugry focused on defense, while Altay Ust-Kamenogorsk pushed forward trying to solve Konstantin Kuzmaul. However, despite the fact that Kazakhstan team got the momentum on their side, they couldn’t find the back of the net before the period expired.

Mamonty Yugry came out hard for the second period as well and went on to score two more goals – Ivan Ezhov and Bogdan Senotov got a tally each. The visitors slowed the pace of the game after that and gave up momentum to Ust-Kamenogorsk. But just as was the case in the opening period, Altay couldn’t get on the board, despite having created several good scoring chances.

The ‘Mammoths’ didn’t look as great in the third period as they did in the previous two and yet they held a firm grip on the game. Midway through the frame Ust-Kamenogorsk found themselves shorthanded and Yegor Chernikov further improved the lead. Home team couldn’t get anything past Konstantin Kuzmaul and Mamonty Yugry went on to enjoy a blowout 5-0 on the road. 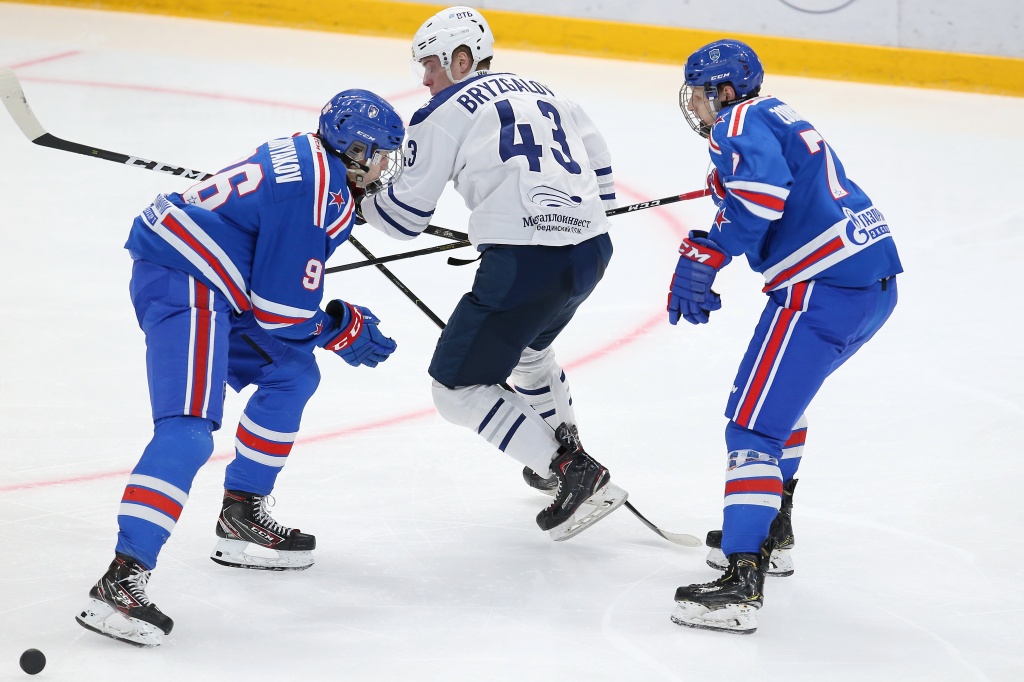 JHC Dynamo Moscow seemed the better team in the early moments of the opening period. The blue-and-white managed to put together several good passing plays, while SKA-1946 St. Petersburg evened out the flow of the game by midway through the frame. Both teams did their best to stay disciplined and played with caution till the end of the period. Goaltenders Dmitry Nikolayev and Maxim Motorygin had very little work to do. However, first Dynamo killed off a penalty and then got in the lead. Semyon Barinov sniped it home shortly before the intermission.

St. Petersburg had the momentum on their side after the intermission. They began spending a lot of time in the offensive zone, but Maxim Motorygin was making one save after another. Moscow responded with quick transition plays but ‘army men’ were more aggressive and faster. The visitors pushed the play away from their zone later in the period but in the last minute St. Petersburg caught them with a counter-attack and Alexander Gordin finished it off. The teams went to the dressing-rooms tied 1-1 after two periods of play.

In the early moments of the third stanza SKA-1946 got a power play opportunity and this time around they managed to capitalize on it. Kirill Kirsanov sieved it through Dynamo goaltender. Dynamo rushed down the ice looking for the equalizer and also got a man advantage but the 46’s scored a shorthanded goal – Alexander Gordin got his second of the game. Moscow continued to press on but ‘army men’ played smart defensively and didn’t let the visitors create any scoring chances. Late in regulation the blue-and-white did get a goal back as Vladislav Mikhailov found the back of the net but St. Petersburg were able to protect their lead and got the win.