SPARTAK LOSE A VITAL POINT IN KHABAROVSK, RIGA AND RUSSKIE VITYAZI WIN TO STAY IN THE RACE FOR THE PLAYOFFS. FEBRUARY 17th REVIEW

SPARTAK LOSE A VITAL POINT IN KHABAROVSK, RIGA AND RUSSKIE VITYAZI WIN TO STAY IN THE RACE FOR THE PLAYOFFS. FEBRUARY 17th REVIEW
Share 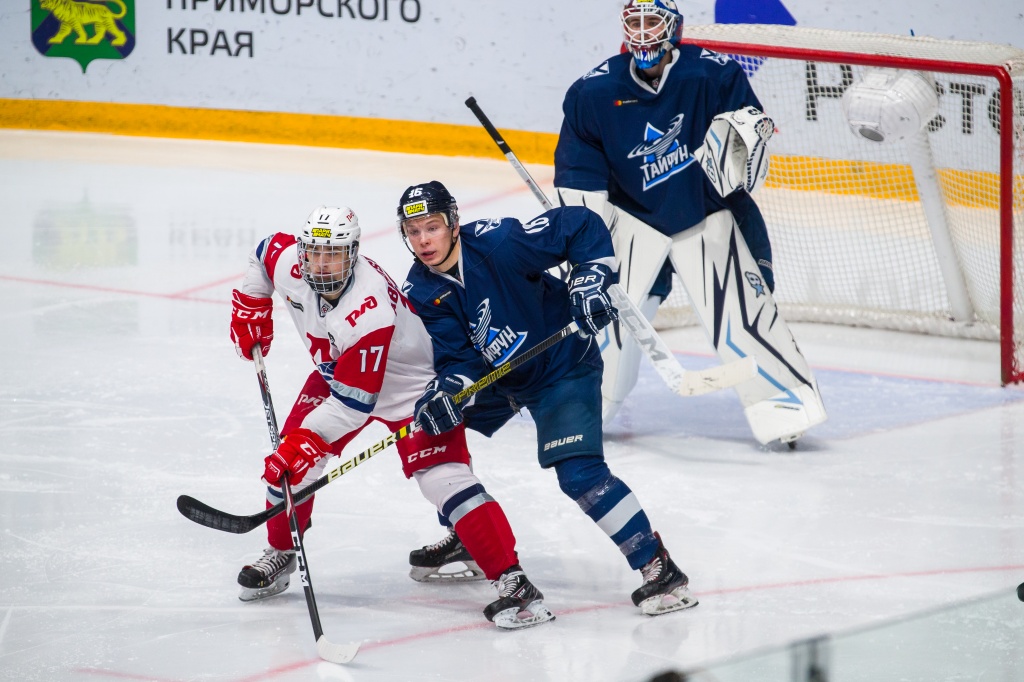 Yaroslavl had the momentum on their side in the opening period of action in Vladivostok. Loko came out hard and established a firm grip on the game right from the get-go. Taifun Primorie Region defense was able to keep the visitors at bay up till late in the period but just as they got a penalty Maxim Beryozkin put Loko in the lead. Home team responded with good transition plays but couldn’t get the equalizer before the intermission.

Taifun managed to turn things around in the second frame. They established good possession and soon enough Alexander Trapeznikov restored the parity. After that the teams traded scoring chances but Vladivostok looked the better team and Yegor Guskov had to bail out his teammates time and again. The teams continued trading scoring chances right till the end of the period and finally Pavel Yelizarov put home side in the lead – Taifun went into the third period with a 1-goal lead.

However, early into the next frame Yaroslavl brought it all back to even again as Maxm Beryozkin scored his second of the game. Loko players stayed hot and managed to capitalize on a power play attempt a few shifts later – Maxim Denezhkin found the back of the net. Having re-established a lead, Yaroslavl continued to control the pace of the game but closer towards the final buzzer Taifun kicked it into gear and forced Loko make a few mistakes and take penalties. As a result, in the last minute of regulation Yaroslavl found themselves down 2-man, while home side pulled their goaltender for the extra attacker. And yet Primorie Region failed to force overtime. Loko win 3-2 on the road.

Almaz get even with Sakhalinskie Akuly 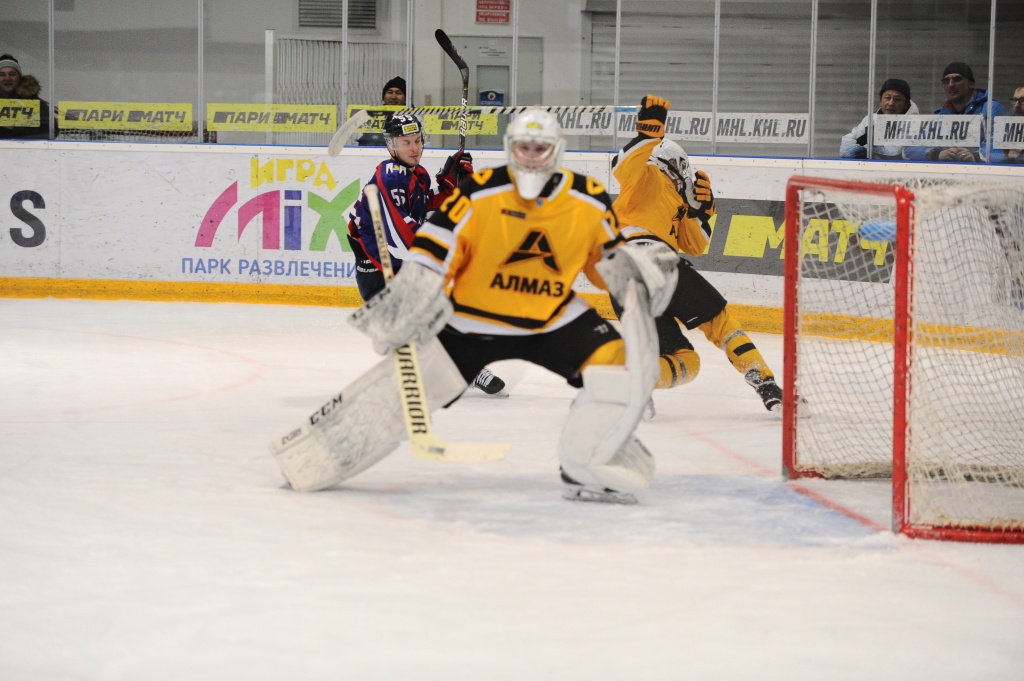 The game was close in the first period of play in Yuzhno-Sakhalinsk. Both Sakhalinskie Akuly and Almaz Cherepovets created good scoring chances but goaltenders bailed out their teams time and again. However, despite the abundance of chances, including those on a power play, there were no goals in the first frame.

Early in the second period Yuzhno-Sakhalinsk got yet another power play opportunity but not only the visitors managed to survive it, they also got in the lead – Mikhail Kalashnikov sniped one home. The ‘Sharks’ went on to get back even fairly soon as Ruslan Akhmetvaliev found the back of the net. Nevertheless, Almaz regained the lead shortly after that – Maxim Nevolin got the marker. Yuzhno-Sakhalinsk picked up the pace but Cherepovets were able to keep them at bay, while late in the period Timur Karimov further improved the lead.

A minute into the third stanza Almaz scored another goal – this time Nikita Guslistov hit the twine to make it a 4-1 hockey game. Sakhalinskie Akuly rushed down the ice after that and got another power play opportunity midway through the period. They managed to capitalize on it – Daniil Glukharev slipped it in. Yuzhno-Sakhalinsk did their best to get back in the game but Cherepovets were able to protect their lead. Thus, the visitors got an important 4-2 win on the road. 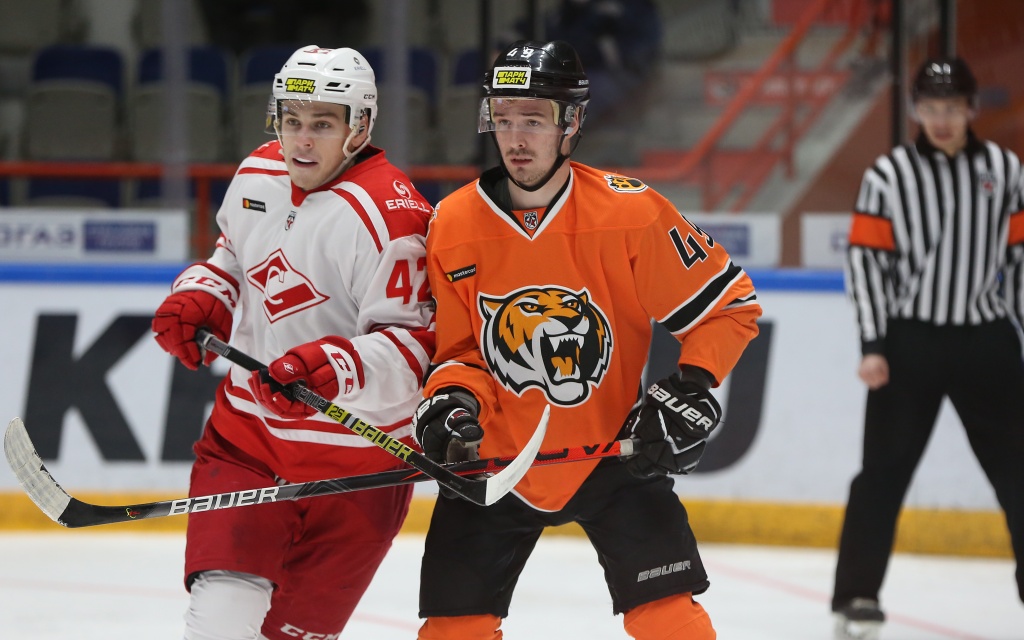 JHC Spartak Moscow managed to grab the momentum early on and six minutes into the game Nikita Borodayenko put the red-and-white in the lead. However, Amurskie Tigry Khabarovsk evened the game out after that and began creating scoring chances against Dmitry Kulikov. Khabarovsk got a man advantage midway through the frame and Ilya Kozhukhov converted on it. Spartak had three power play opportunities before the period expired but couldn’t capitalize on either of them and couldn’t recapture the lead.

Nevertheless, home team side converted on their power play attempt early in the second stanza – Yuri Kozhukhov put the ‘Tigers’ in the lead. The teams were evenly matched after that once again but another penalty led to another goal – Andrei Legalin restored the parity on the scoreboard. The teams opted for cautious hockey after that. Neither of the teams was willing to risk and there was nothing between the two after 40 minutes of play.

Amurskie Tigry and Spartak played with caution in the third stanza as well. There were very few scoring chances as neither of the teams was aggressive enough in the offensive zone. As a result, regulation solved nothing and the game went to overtime and then the shootout. Konstantin Kukharev won it for Amurskie Tigry. 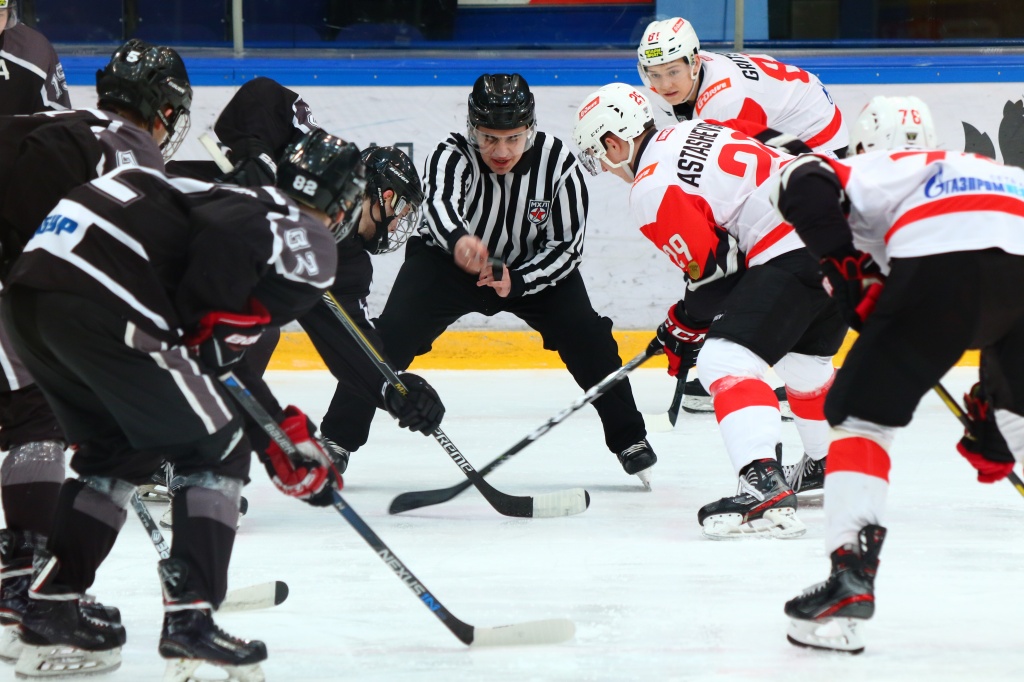 Omskie Yastreby had the momentum on their side throughout the opening period. The ‘Hawks’ began spending a lot of time in the offensive zone right away, forcing Alexei Shchetilin make one save right after another. Seven minutes in the visitors got on the board – having failed to convert on a power play, Kirill Spitsenko put it home right after Tyumensky Legion had gotten their 5th player back out on the ice. Omskie Yastreby continued creating scoring chances but Legion defense was able to keep them at bay. It lasted right up till the final minute of the period – with 18 seconds on the clock Albert Alikov doubled the lead for Omsk.

The visitors continued to dominate in the second frame. They managed to get another goal early into it as Vladimir Mashkov found the back of the net. The ‘Hawks’ held the reins of the game, not letting Tyumen spend a lot of time in the offensive zone or creating scoring chances. Having spent almost the entire second period in the offensive end, Omskie Yastreby scored yet another goal right before the intermission – with nine seconds on the clock Yegor Chinakhov put it in. Omsk had a 4-0 lead heading in the third period.

The flow of the game didn’t change in the third stanza. Omskie Yastreby continued to press and create scoring chances. Alexei Shchetilin let in three more goals in the first half of the final stanza – Daniil Berestnyov, Danila Dudin and Georgy Marchenko got the tallies. Omsk scored another goal before the final buzzer – Semyon Astashevsky registered the marker. Omskie Yastreby enjoy a blowout 8-0 win on the road. 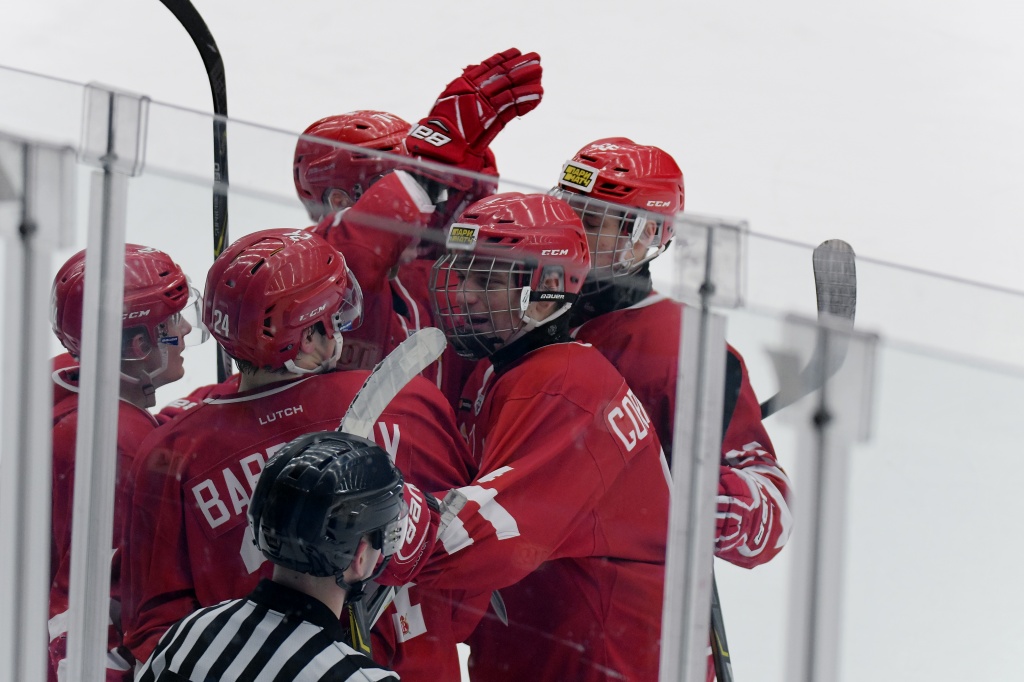 Atlant Moscow Region went into the game against Russkie Vityazi without their head-coach Andrei Lunev, who was serving a 2-game suspension and followed the bout from the stands. His assistant Oleg Komissarov was at the helm for this one. He put Platon Zadorozhny in goal and restored Alexander Daryin on the 4th line.

Russkie Vityazi got off to a good start in Moscow Region rivalry. Maxim Bets’ men outshot the opposition in the first two periods of play and scored three goals. Zakhar Bardakov opened up the scoring with a minute remaining on the clock till the first intermission, while Nikita Kalintsev scored his first career Junior Hockey League goal early in the second frame, followed by a goal from Yegor Zubov.

Nikita Miller gave Atlant some hope but midway through the third stanza Bardakov scored his second of the game to restore the 3-goal margin. That goal turned out to be the game-winner. In the final ten minutes of regulation Atlant looked hot and managed to get two goals past Daniil Chechelev. Nevertheless, Grigory Nesvetayev and Matvei Nosov efforts were all for naught. Russkie Vityazi protected the 4-3 lead to snap their 2-game losing streak and get closer to Western Conference playoff zone. 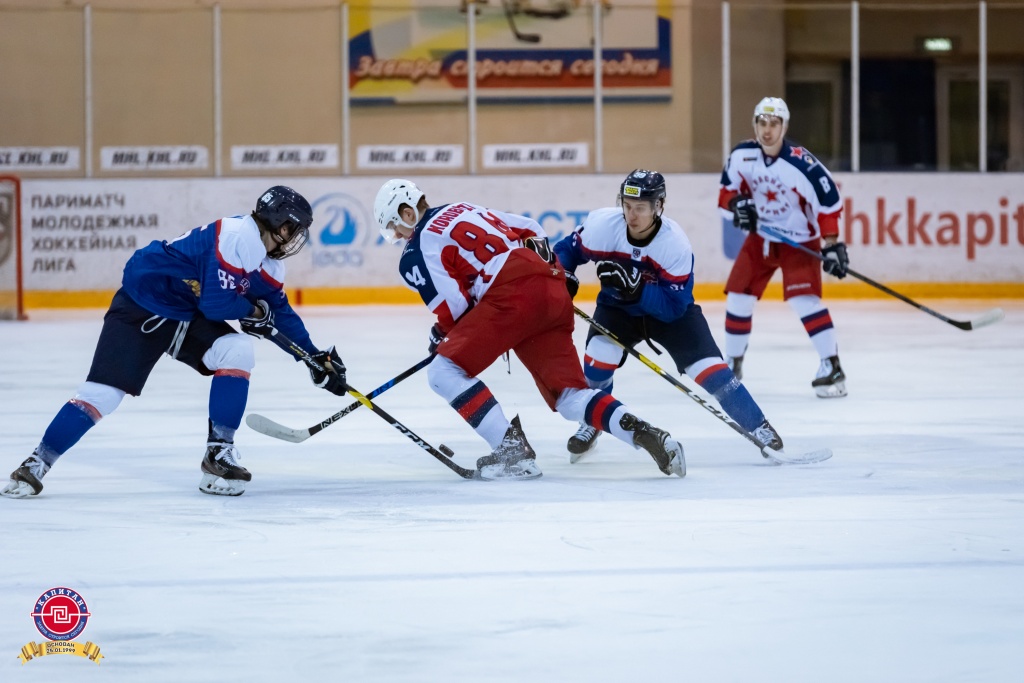 Prior to the home game against one of the top teams of the conference HC Kapitan Stupino coaching staff made major adjustments to their roster. Daniil Pyatkin and Daniil Tyutchev, who missed the previous two games due to rotation, made their way back into the lineup.

Krasnaya Armiya Moscow, who continue to battle for 2nd place in the West, came out hard for the first period of play, outshooting the opposition 11-3. Quantity turned into quality – Nikita Dolgopyatov put his team in the lead just four minutes in with a power play goal. Yegor Korbit went on to double the lead for the visitors.

The fans were treated to Kapitan’s first goal only late in the third period. In the second stanza home team managed to protect their net and create a few scoring chances against Kirill Samsonov, who played just his 10th career Junior Hockey League game. Kapitan’s top-scorer Amir Garayev put Stupino on the board. Late in the game home side locked ‘army men’ in their defensive zone while having a power play and created loads of good chances but Samsonov didn’t let Kapitan send the game to overtime.

Krasnaya Armiya win 2-1. This is their 4th consecutive victory. Kapitan, who had lost their last playoff hope, lost their 4th game out of the past seven. 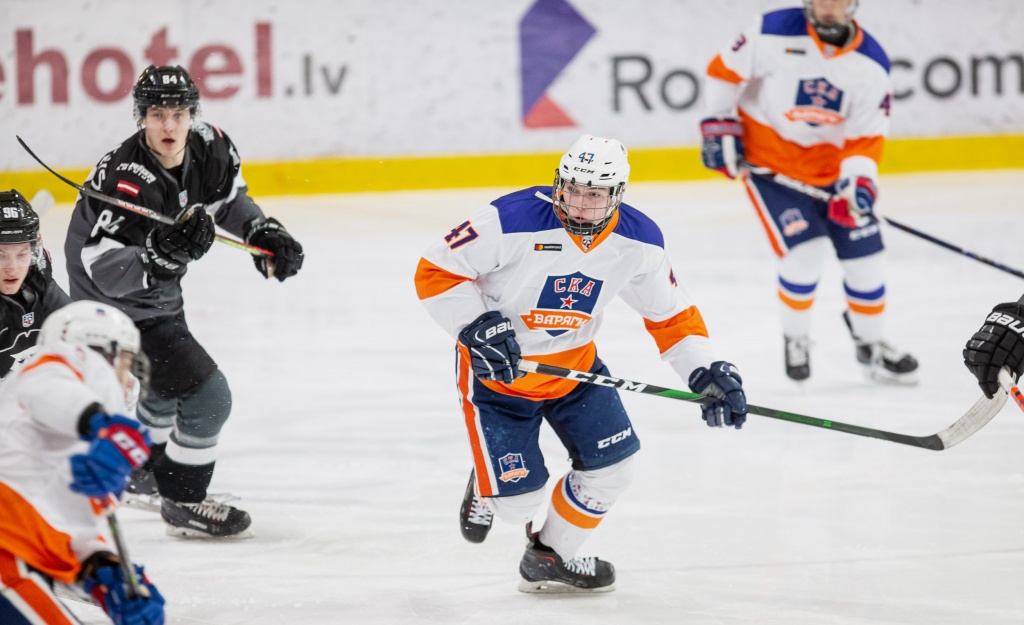 The gameday ended in Latvia’s capital as HK Riga began their final homestand in the regular season with a bout against SKA-Varyagi St. Petersburg. Raimonds Vilkoits’ men continue to battle for a playoff spot, while St. Petersburg compete with Amurskie Tigry Khabarovsk for 15th place in the Eastern Conference.

Riga had the momentum on their side throughout the game, took twice as many shots but were limited to just two goals. Midway through the second period Patriks Zabusovs converted on a power play to open up the scoring. The fans got to see another goal with just 22 seconds remaining to play in regulation as Kristaps Skrastins slipped one into the empty net. Bruno Bruveris stopped all 23 shots he had to face to earn his second career Junior Hockey League shutout.

Riga win 2-0 and remain 8th in the West, despite Russkie Vityazi’s victory the same day.