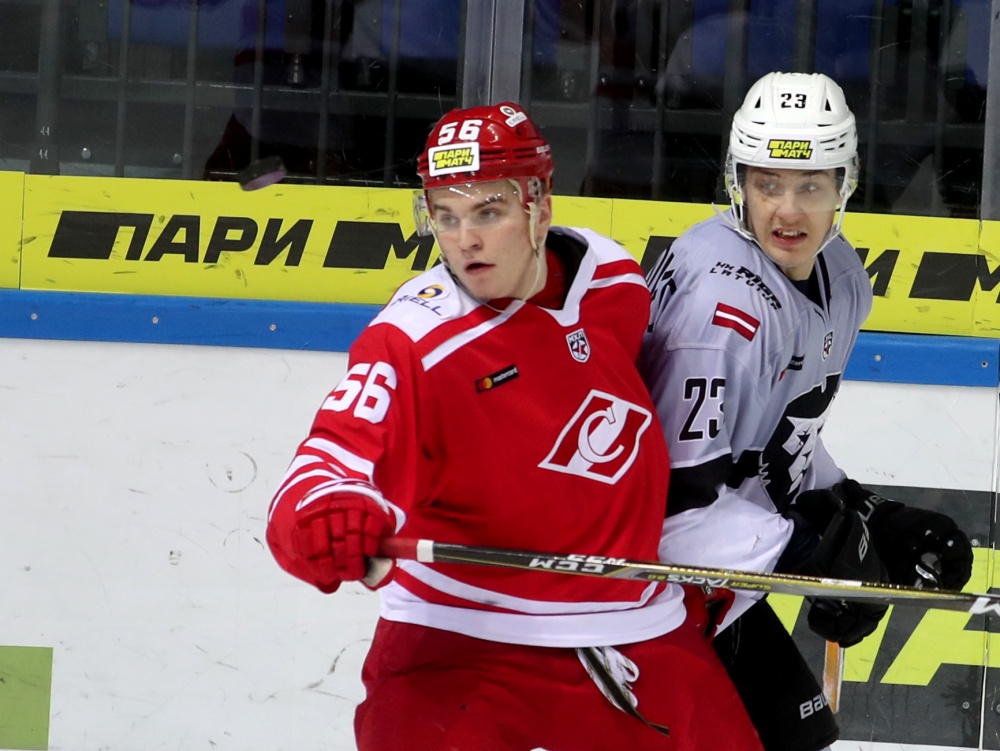 Tyumensky Legion get even with Kuznetskie Medvedi 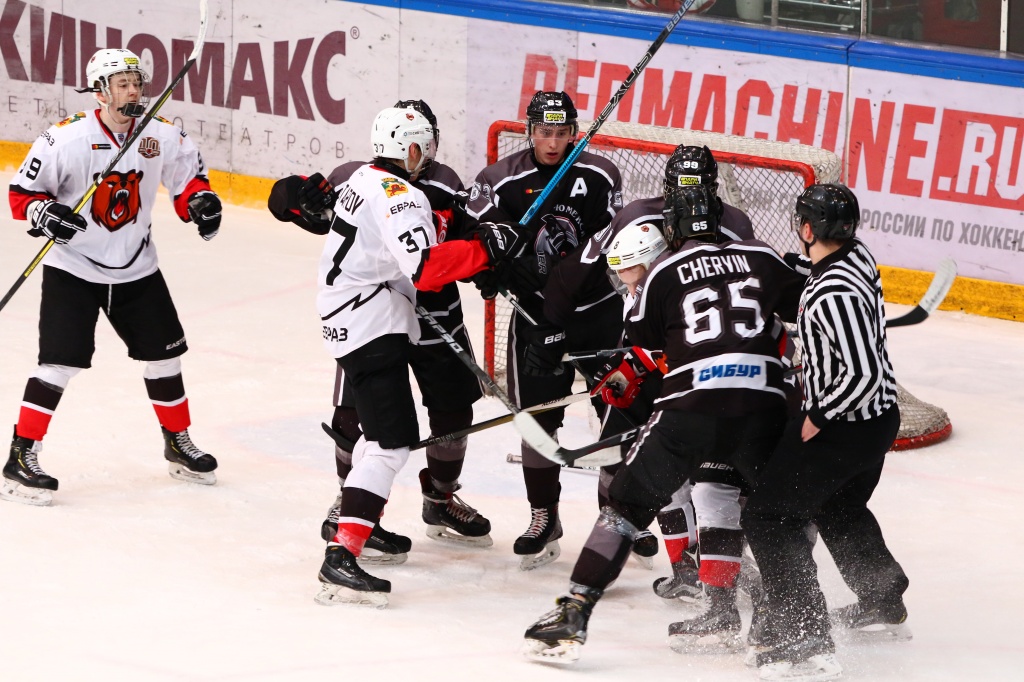 Eastern Conference underdogs Tyumensky Legion and Kuznetskie Medvedi went up against each other in the second game of the back-to-back series in Tyumen. While Novokuznetsk enjoyed a narrow win the day before, home side dominated in the following bout. First goal of the game came in the last minute of the opening period – Tyumensky Legion top-scorer Alexander Golovin converted on a power play. There’s was just a single goal in the second frame as well – the very same Golovin notched another power play tally.

Three minutes into the third stanza Gafar Satarov responded with a shorthanded marker but Tyumen was the only team scoring after that. Evgeny Volkov restored the 2-goal margin, while Artyom Vasyukov netted a shorthanded goal while Volkov was in the penalty box. Late in regulation home team scored two more – Mikhail Suslikov and Artyom Pylayev found the back of the net. Tyumensky Legion enjoy a blowout 6-1 win. 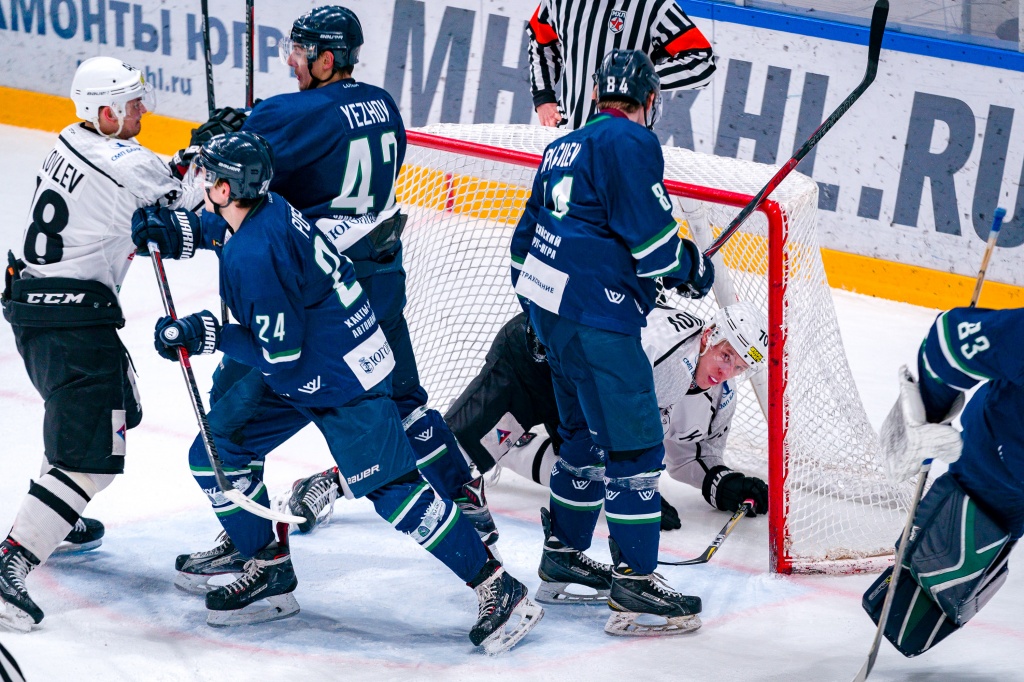 Two teams, who are located the bottom half of Top-8 in the Eastern Conference – Mamonty Yugry and Belye Medvedi Chelyabinsk – faced off in Khanty-Mansiysk. The day before ‘Polar Bears’ enjoyed a win, but home side won the second game of the back-to-back series. First period of action featured no goals but each team scored twice in the second frame. Danila Vtorushin and Maxim Kirileichenko scored for Khanty-Mansiysk, while Danil Zinovyev and Mikhail Goryunov-Rolziger got a tally each for Belye Medvedi.

Three minutes into the third stanza Arkady Aksyonov put Chelyabinsk back in the lead but the ‘Mammoths’ were the better team late in regulation. First the visitors conceded a goal off a quick transition play as Ivan Ezhov made it a 3-3 hockey game. Later on Damir Shirgaziyev scored the winner with two and a half minutes remaining on the clock. 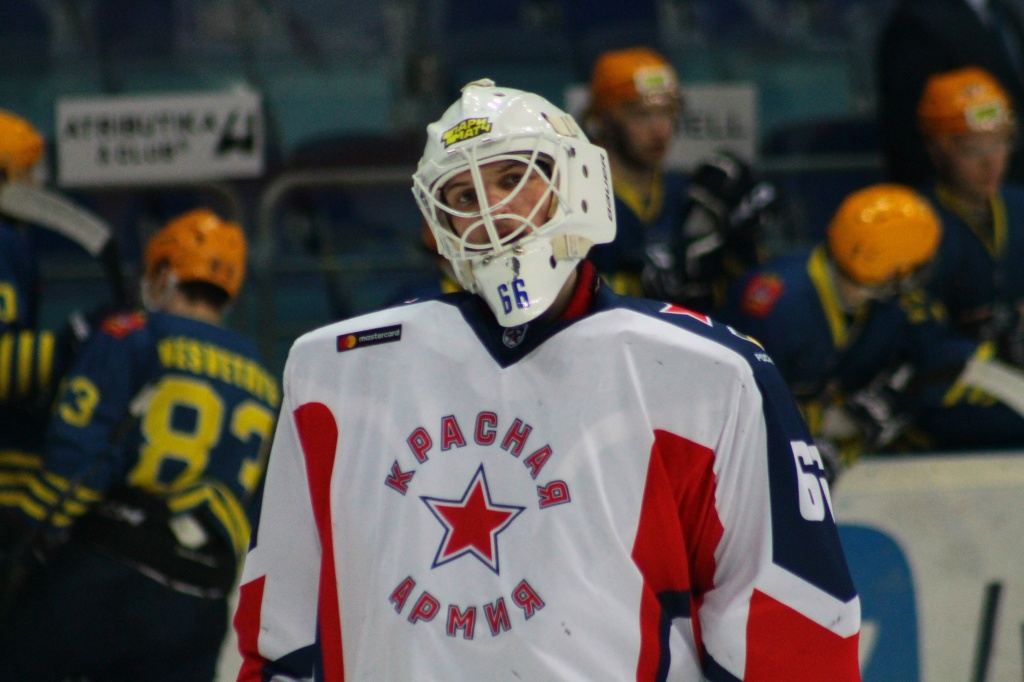 Krasnaya Armiya Moscow visited Mytischi, Moscow Region this weekend and Atlant managed to defeat the mighty foe in a high-scoring game. ‘Army men’ got back even with a win in yet another hard-fought outing. Most of the goals came in the opening period of play. Semyon Kareyev got the first tally of the game and Krasnaya Armiya tied it up with a marker by Nikita Dolgopyatov. With four minutes on the clock Matvei Nosov put Moscow Region back in the lead.

Moscow brought it back to even in the second stanza as Nikita Dolgopyatov scored his second of the game. Midway through the third frame home team got a penalty shot called against them but Ilya Chaban couldn’t beat Danil Fomin. Krasnaya Armiya went on to win the game in overtime as Daniil Anop found the back of the net. 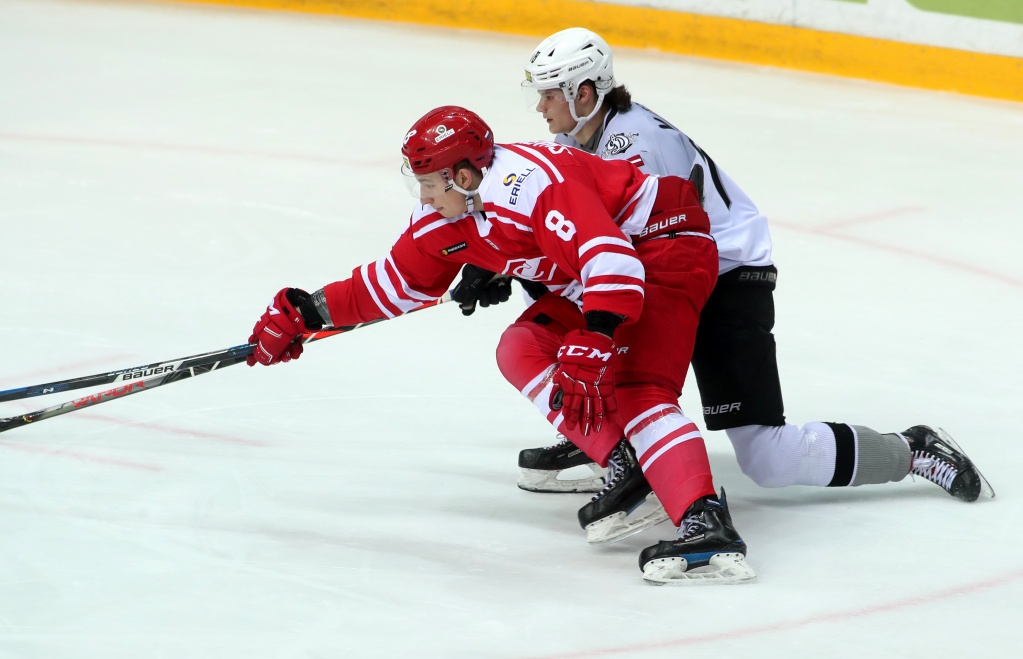 JHC Spartak faced HK Riga in Moscow. The teams are neighbors in the standings and Riga do their best to climb back to playoff zone. As for Spartak, they are just one point away from the 9th spot in the Western Conference. Nikita Borodayenko opened up the scoring just three minutes in. In the last minute of the first period of play the red-and-white got a penalty shot called against them but Bulat Galimov didn’t manage to convert on it. However, Latvian team did convert on a power play – Antons Sinegubovs got the marker. Moscow improved their lead to two goals as Yegor Kruzhenkov and Ruslan Novruzov found the back of the net.

The visitors played outstandingly well in the final ten minutes of regulation and were able to force overtime – Sinegubovs scored his second of the game, while Denis Fjodorovs got another goal with eight minutes till the final buzzer. Spartak edged Riga in the extra period as Yegor Maklozyan scored the winner. Despite the loss, Riga replace Russkie Vityazi at the 8th spot in the West.

Avto defeat Sputnik on the road 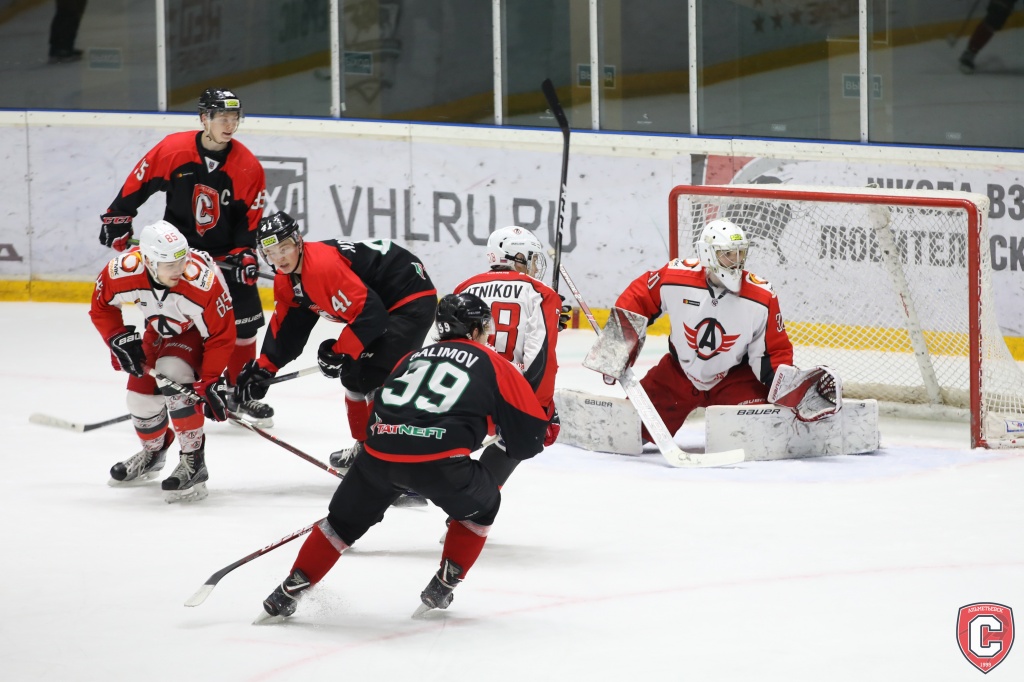 Avto Yekaterinburg, who are currently 4th in the Eastern Conference, visited Almetyevsk. Sputnik once again failed to get closer to playoff zone – Eduard Dmitriev’s team is now just a handful of points away from it. 13 minutes into the game home team’s Iskander Mulyukov got a penalty and Yekaterinburg went on to convert on the ensuing power play – Ilya Loza slipped one in. Daniil Zaitsev converted on Almetyevsk’s next penalty as well, while Vladislav Bukharov scored at even strength.

The visitors calmed down after it and focused rather on protecting the lead than trying to improve it. They were successful at that as they allowed just one goal from Denis Sizikov. Georgy Romanov also stopped Aidar Nazmutdinov on a penalty shot attempt.

Tolpar beat Reaktor, soar back on top of the East 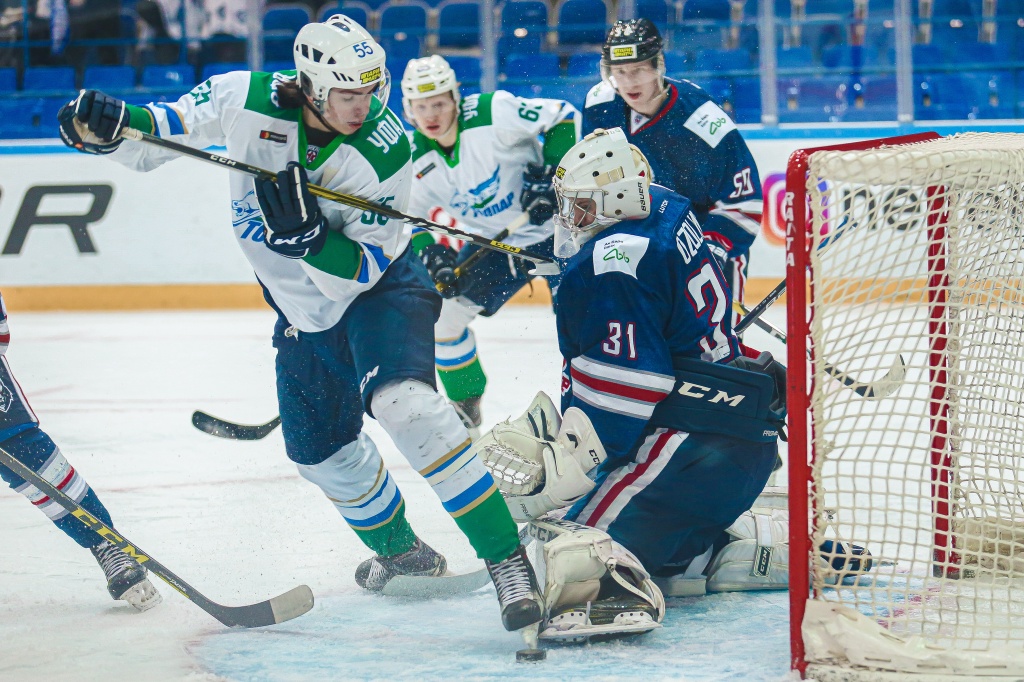 In the final game of the day, which was held at Neftekhim-Arena in Nizhnekamsk, local Reaktor faced Tolpar Ufa, who continue to battle with Omskie Yastreby for the top spot in the Eastern Conference. Ufa scored twice in the opening period of play – Danil Alalykin and Alexei Pustozyorov found the back of the net. Nizhnekamsk responded with a goal by Ilya Paranin but that was the only marker Reaktor could get in this one.

Vladimir Bakanin also got a tally before the intermission. After that Sergei Varlov senselessly checked an opponent to the head and got a misconduct. Sergei Safin-Tregubov and Sergei Shapovalenko further improved the lead in the third stanza. With this solid win Tolpar climb back on top of the East.

Sibirskie Snaipery got blanked by the top team of the East 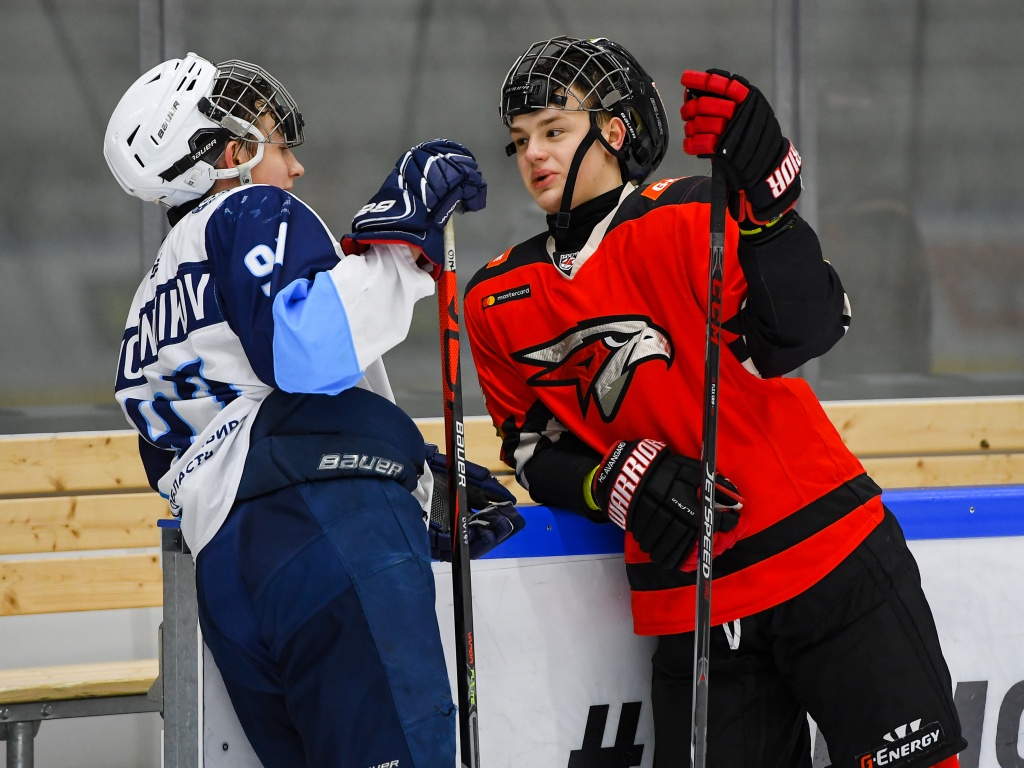 The gameday kicked off in Omsk where the ‘Hawks’, who were on top of the Eastern Conference just recently, played hosts to their rivals Sibirskie Snaipery – a team located at the 5th place. Omskie Yastreby’s mighty offense converted on their initial power play opportunity of the game as Bogdan Denisevich found the back of the net, while Alexei Prokopenko and Semyon Chistyakov picked up the assists.

Novosibirsk looked tired in the second period but despite Omskie Yastreby having the advantage they doubled their lead only early in the third period. Home team once again capitalized on their power play chance – this time around Matvei Zaseda hit the target. Alexei Prokopenko scored his team’s third goal of the game, thus participating in every tally. Georgy Dubrovsky stopped 30 shots en route to a shutout win.