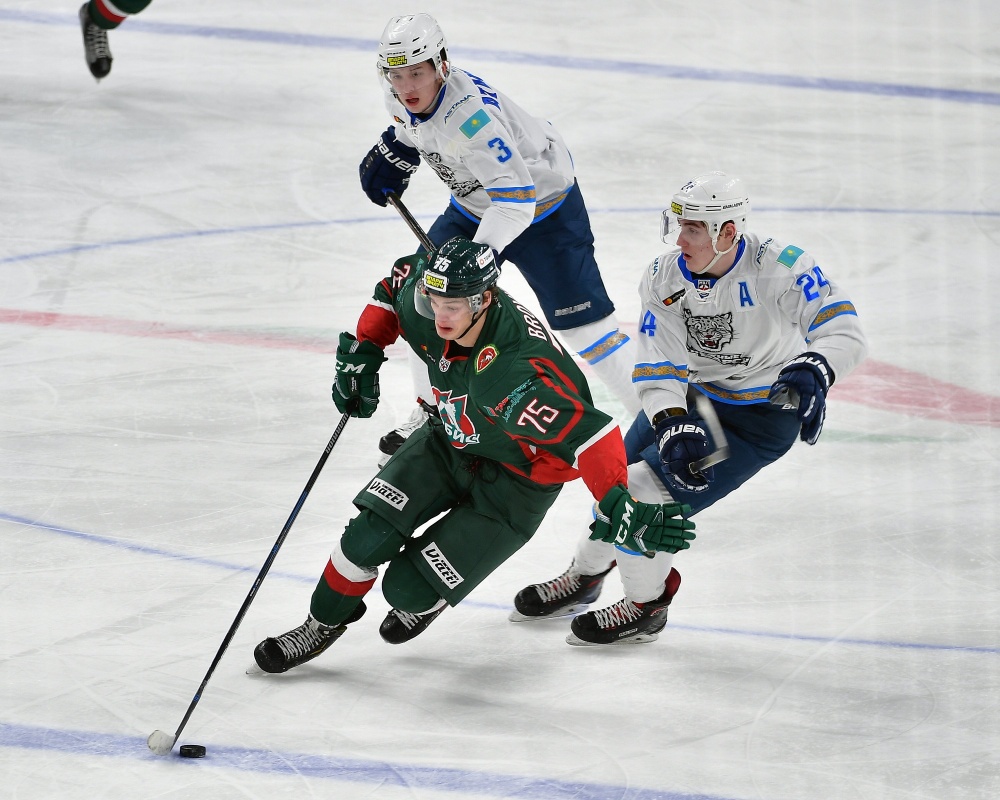 Eight regular season games took place in Parimatch Junior Hockey League on February 7th. As many as two Western Conference teams battled to clinch the playoffs, while Eastern teams also fought for post-season berths. We take a look at Friday action in this review. 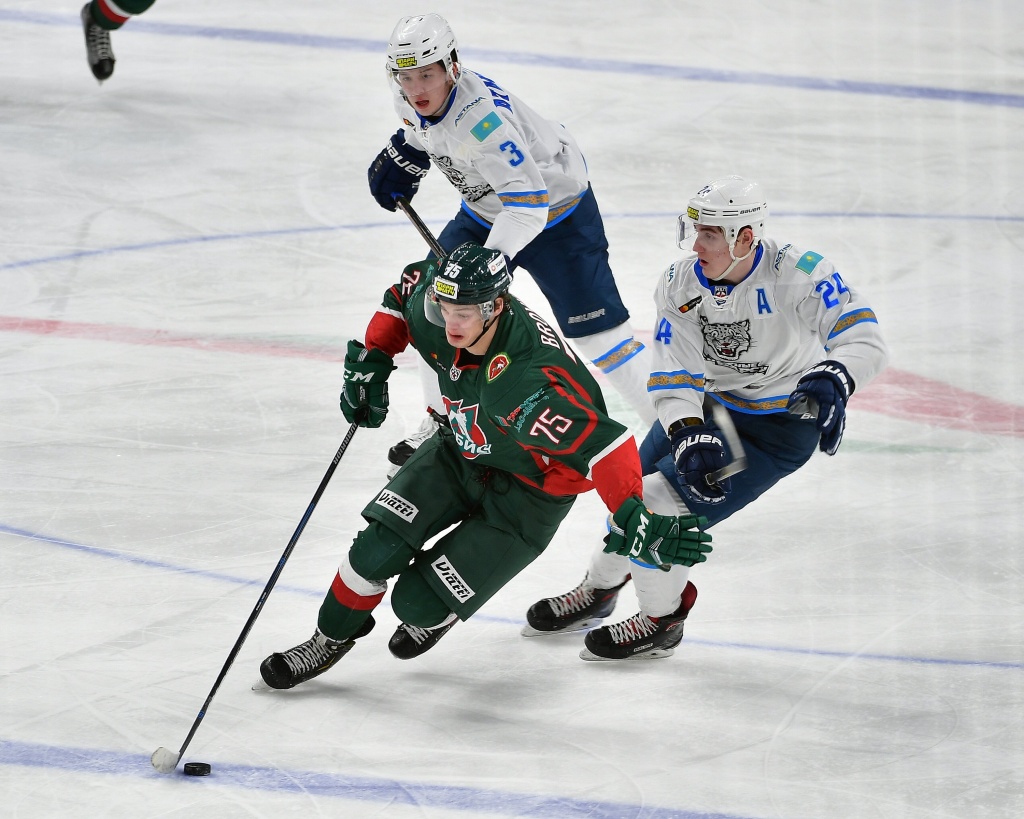 Snezhnye Barsy Nur-Sultan dressed just three lines for the second game of the back-to-back series against Irbis Kazan. While in the first bout Nur-Sultan were able to contain the opposition and gain points, they ran out of fuel the next day. Irbis had the momentum on their side for almost the entire game and took twice as many shots en route to a 5-2 win.

Unlike the first game, Snezhnye Barsy opened up the scoring – four minutes in Rustem Dzhumagulov scored his first career Junior Hockey League goal. Nevertheless, the visitors finished the period with a lead – Roman Poluvytnov and Daniil Khristanov got a tally each past Maxim Pavlenko. Snezhnye Barsy restored the parity midway through the second period as Dias Atakhanov hit the target.

After that home team was the only one scoring. Sergei Starygin had to swap Pavlenko for Roman Kalmykov, who allowed three goals. Daniil Grigoryev and Ilyas Sitdikov scored a goal each in a span of three minutes in the second period and with 10 minutes remaining to play in regulation Ruslan Galimzyanov set the final score. With this 5-2 win Irbis sit comfortably third in the Eastern Conference. 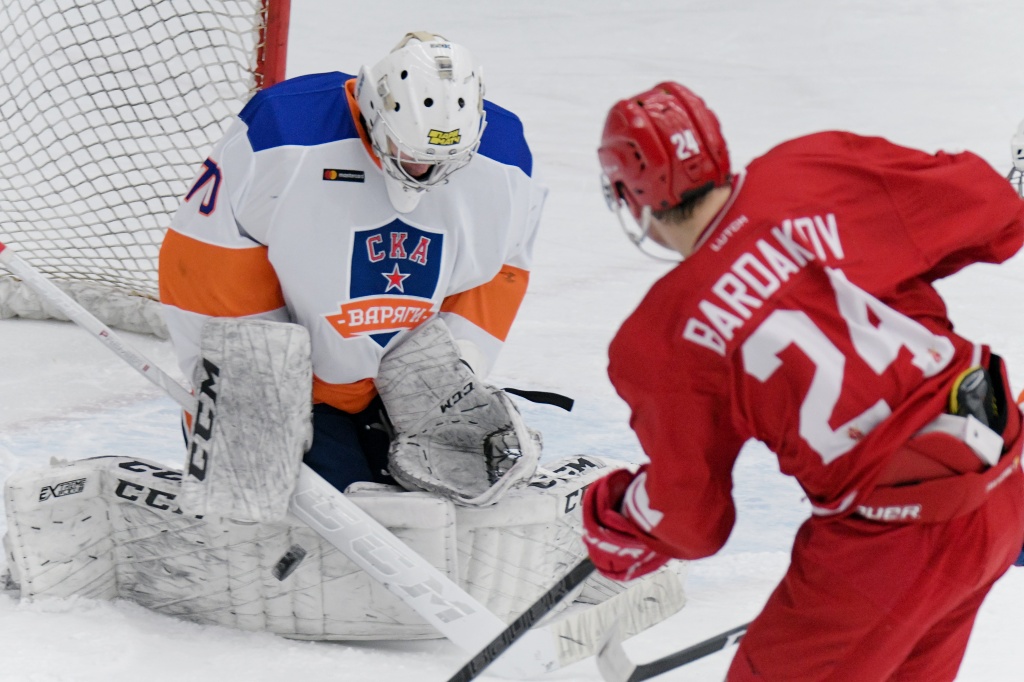 While in the first game of the back-to-back series home team quickly established a comfortable 3-goal lead, second bout in Chekhov proved to be more intense. Besides, this time around it was SKA-Varyagi who got on the board first – 14 minutes in Vladimir Sychyov solved Daniil Chechelev. That goal remained the only one for a long time. Home team had the momentum on their side to a certain extent but managed to level it only early in the third period as Semyon Demidov found the back of the net.

Late in regulation Russkie Vityazi began piling up penalties – Maxim Bets’ team had to kill off three consecutive penalties but the visitors failed to capitalize on either of them. Moreover, St. Petersburg special team made a mistake, which led to a shorthanded marker by Nikolai Smirnov. Despite the final push late in regulation, SKA-Varyagi couldn’t change anything on the scoreboard. With this 2-1 win Russkie Vityazi are now tied with HK Riga and Krylia Sovetov Moscow, who were tied for 8th spot in the Western Conference before the game.

Loko and Amurskie Tigry combine for 11 goals in Yaroslavl 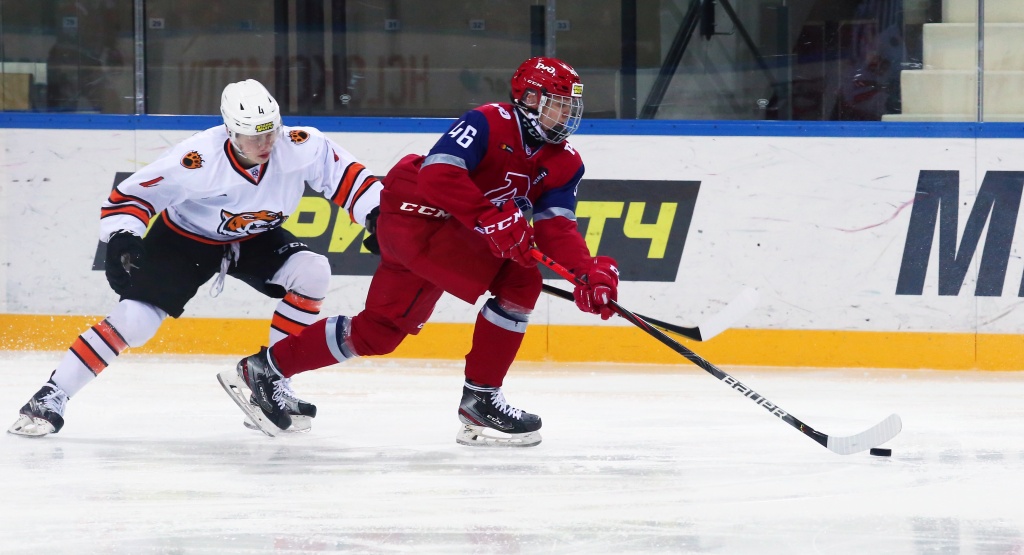 Second game of the back-to-back series in Yaroslavl proved to be more high-scoring than the bout the day before. Loko Yaroslavl scored seven goals for the second consecutive time, while Amurskie Tigry Khabarovsk got four. The fans were treated to six tallies in the opening period of play alone and all of them weren’t scored at even strength. First the visitors converted on two power play attempts and then the ‘railway men’ responded with two shorthanded markers. Shortly before the intermission Loko got a 5-minute man advantage and converted twice on it. Danila Dyadenkin scored twice to put Yaroslavl in the lead and then Alexander Daryin doubled the margin.

Second period of action began with another power play goal by Loko, which essentially put it out of reach. Yegor Antonov and Mikhail Radenko got a tally each past Yegor Gorshkov but Anton Lukichyov and Yeremey Shumilin restored the 3-goal handicap in the third period. Amurskie Tigry lose 7-4 and leave Yaroslavl with no points.

Chayka come back from behind to beat Altay 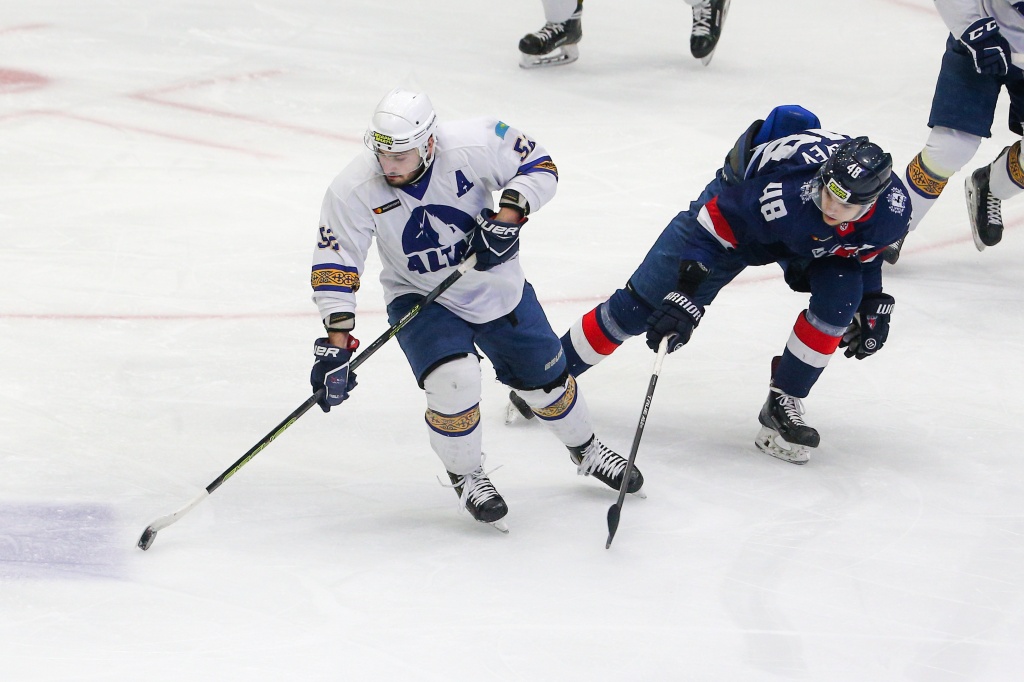 Chayka Nizhny Novgorod faced Altay Ust-Kamenogorsk. While Nizhny Novgorod are just one point away from the playoff zone, Ust-Kamenogorsk can’t afford to lose as they’re 13 points behind the 8th spot in the Eastern Conference. Each team had a power play attempt in the opening period, while Chayka had a slight advantage on the short-clock. However, the fans didn’t get to see any goals over the stretch. The visitors got in front with a quick goal in the second period. Nikita Nazarov found the back of the net, while German Shaporev and Maxim Makarov picked up the assists.

Home side dominated in the third stanza. Yegor Alexeyev tied it up three minutes in, Artemy Mutovin put Chayka in the lead and later in the period Nikita Tomilov set the final score. Nizhny Novgorod enjoy a 3-1 win and at least for a short time edge Mamonty Yugry off the 8th spot in the conference. Khanty-Mansiysk have two games in hand. 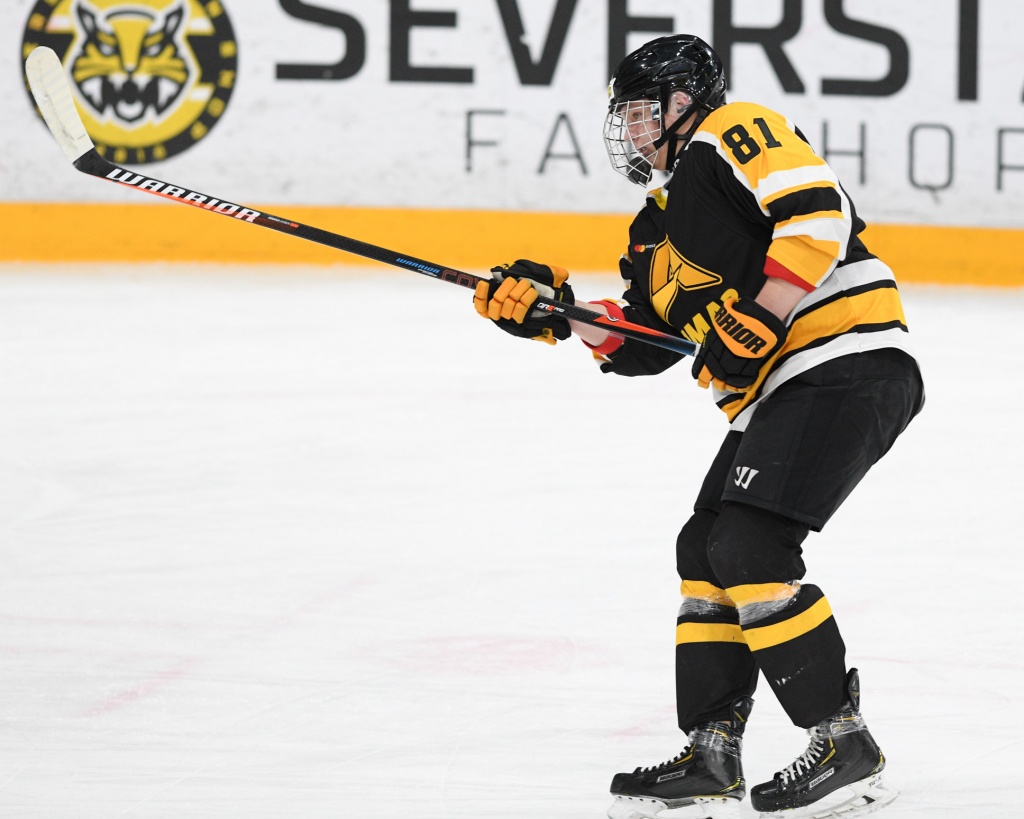 Almaz Cherepovets faced Krylia Sovetov Moscow on home ice. The visitors came into the game as the 9th team of the Western Conference. With a win Cherepovets could clinch the playoffs but ‘Soviet Wings’ had other plans. The visitors allowed a goal just two minutes in – Vladislav Kuznetsov got the marker. However, not only Moscow managed to get back even before the intermission, they also got in the lead – Ildar Kashafetdinov and Roman Yermachikhin got the tallies.

There was no scoring in the second period but Almaz brought it back to even in the third stanza as one of their top players Yegor Chizhikov stepped into the spotlight. Alexei Kapustin put Cherepovets in the lead with a power play goal. Krylia Sovetov responded by Ivan Klimkin’s goal. But Danil Uvarov’s penalty and Nikita Lukhovsky’s marker shattered visitors’ hopes. With this win Cherepovets clinch the playoffs. 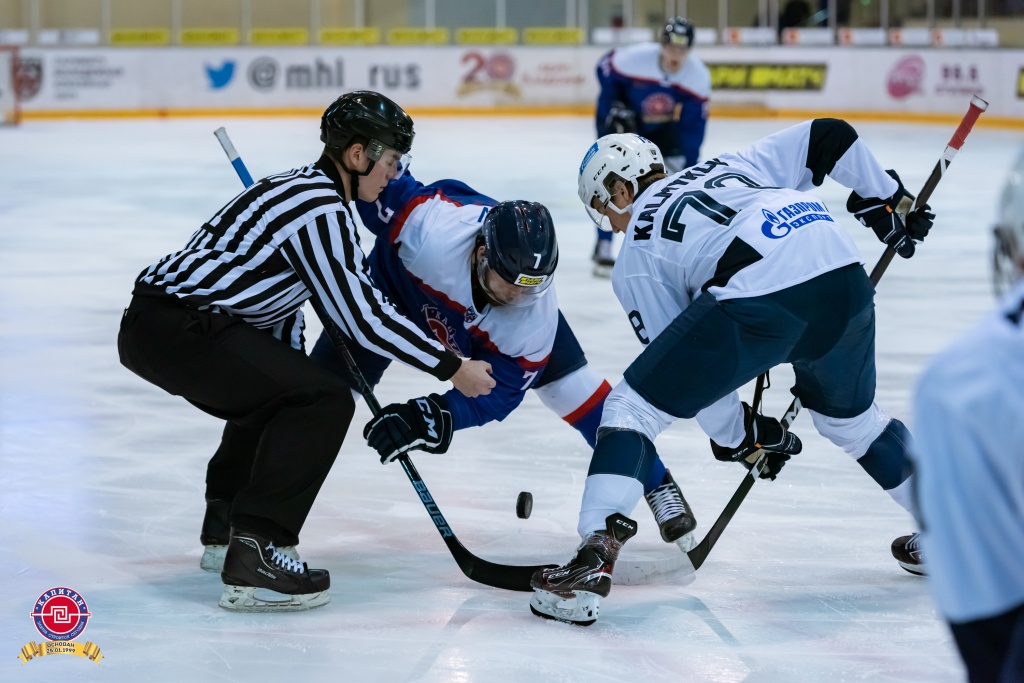 HC Kapitan Stupino, who had to win the game to keep their playoff hopes alive, much like Altay, faced JHC Dynamo St. Petersburg for the second time in a row on home ice. The visitors ran into a penalty problem in the first period of action and yet still managed to get on the board. Just as Pavel Kuznetsov stepped back onto the ice, Vladislav Vlasov sniped one past Leonid Sklyar. Dynamo found their rhythm in the second frame and began scoring all kinds of goals.

Alexander Zhabreyev, Pyor Yakovlev and Yegor Anisimov got a tally each, while Dmitry Rashevsky got a pair. Stupino responded with a solo goal by Daniil Tyutchev. Ivan Kazakov scored another goal for the home side in the third stanza but Dynamo went on to win it in blowout fashion. Vlasov scored his second of the game, while Rashevsky walked away with a hat-trick. 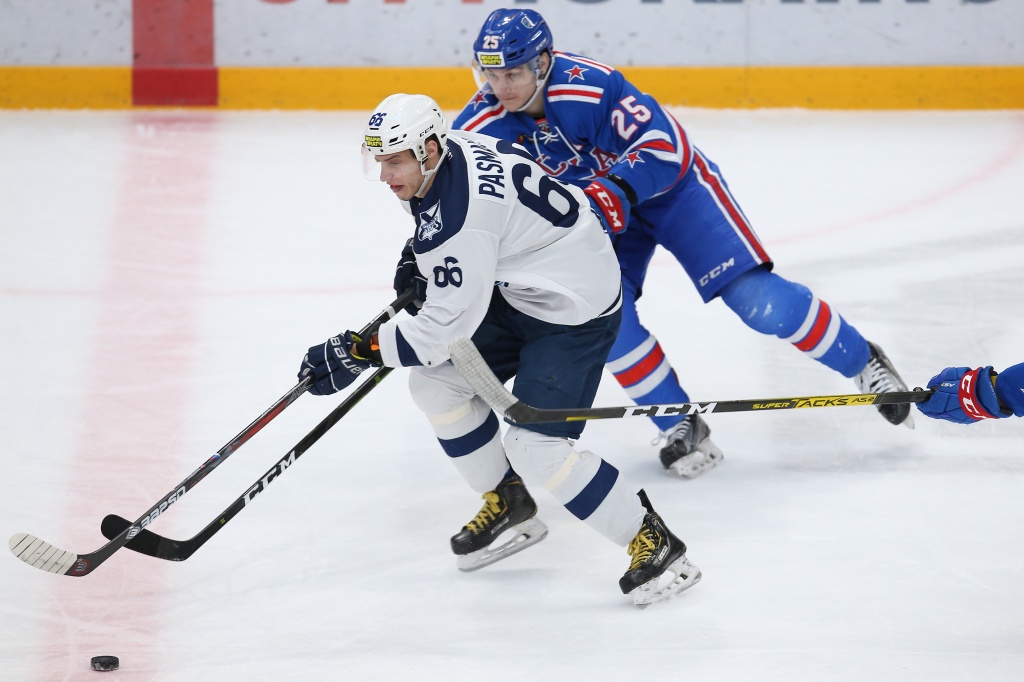 Top team of the Western Conference SKA-1946 St. Petersburg once again played hosts to Taifun Primorie Region. The day before ‘army men’ scored ten goals against the visitors and they weren’t going to go easy on Primorie Region in the second game of the back-to-back series either. SKA-1946 scored three goals in the opening period of play alone – Alexander Gordin, Adel Galiullin and Nikita Dishkovsky found the back of the net. ‘Army men’ got three more tallies in the following period – this time Artyom Gradovich, Maxim Krovyakov and Vladislav Tsitsyura got the markers.

Primorie Region responded with just one goal as Leonid Pasmanik hit the twine. Home team stayed true to their pace and scored three more goals in the final period. Gradovich and Krovyakov got their second tallies of the game each, while Nikita Shuidin added one of his own. Ivan Lapshin set the final score. SKA-1946 win 9-2 on home ice.

Sarmaty beat Ladiya on the road 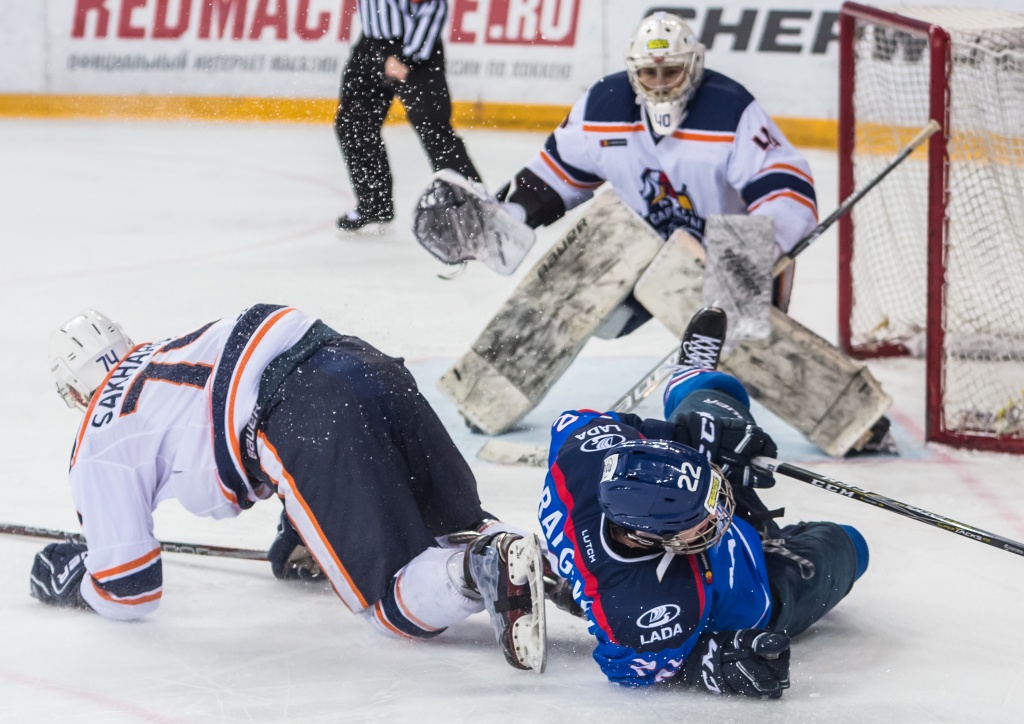 The gameday kicked off in Togliatti as Ladiya played hosts to Sarmaty Orenburg. Despite the fact that the two teams were just three rows apart form each other in the standings, they play for different goals late in the regular season. Orenburg still battle to clinch the playoffs, while Togliatti are the best JHL team who might miss the post-season.

Nevertheless, both teams came into the game riding winning streaks. Sarmaty had won two home games in a row, while Ladiya, led by recently appointed head-coach Oleg Larionov, got three consecutive victories. First period of action proved the equilibrium between the sides. The teams were tied on the shot-clock and scored a goal each. The visitors opened up the scoring midway through the period – Artyom Zabrodin stopped Ilya Zhitnikov’s shot but it bounced straight to the tape of Ivan Timashev, who beat the goaltender with a nice move and sent it into the back of the net. Togliatti brought it back to even with just a minute remaining on the clock – Yegor Dobrodum fired one home from mid-range past Anton Borodkin.

Second period began with a quick goal by Sarmaty – Alexei Barkhatkin made the opposition pay for their mistake and scored a shorthanded marker. Ladiya could have gotten back even soon enough but their forward missed the yawning net with a backhand shot as the puck hit the bar. Another goaltender was bailed out by his best friend 10 minutes later – Artyom Zabrodin heard the ding on a power play. Despite the quick goal and the fast-paced game, neither of the teams could get another tally before the intermission.

The teams stayed hot in the third stanza as well and traded goals in the early minutes. First Ladiya brought it back to even as Evgeny Groshev finished off a great solo dash but just 26 seconds later Nikita Savelyev capitalized on a quick transition play, putting the visitors back in the lead. With 13 minutes remaining on the clock Ivan Terletsky doubled the margin – game officials had to take another look at the play but the goal was confirmed in the end. It proved to be the game-winner. Seven minutes prior to the final buzzer Pavel Simonov converted on a power play chance to bring the home side back to within one but Volga team failed to force overtime.

Sarmaty win 3-2 for their third consecutive win and are now just four points away from the playoff zone.