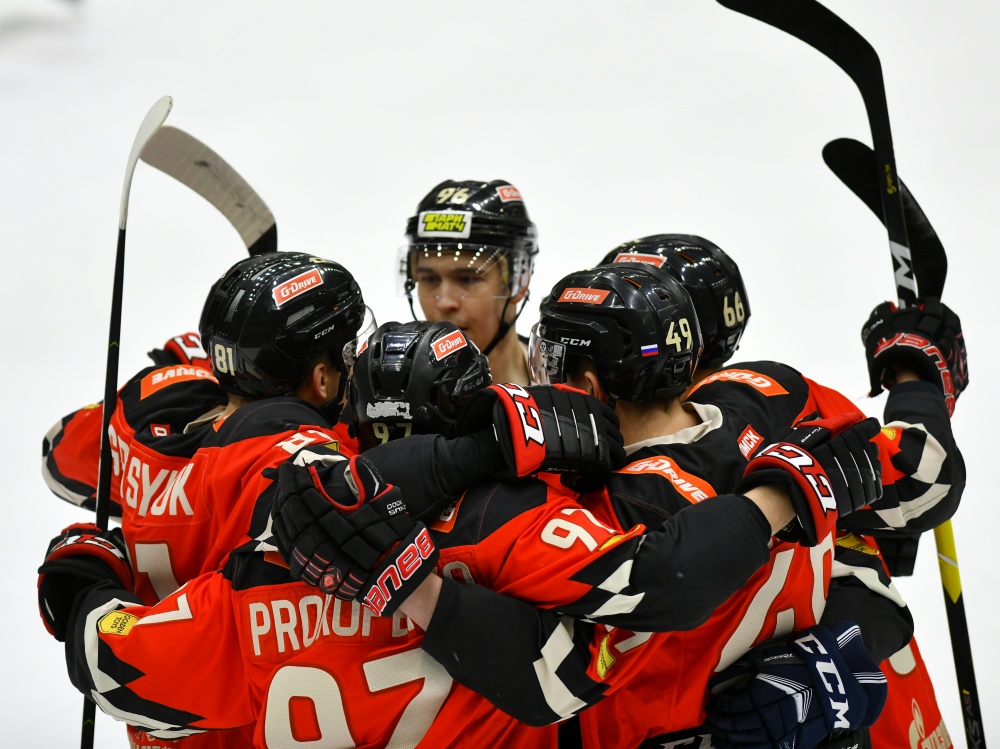 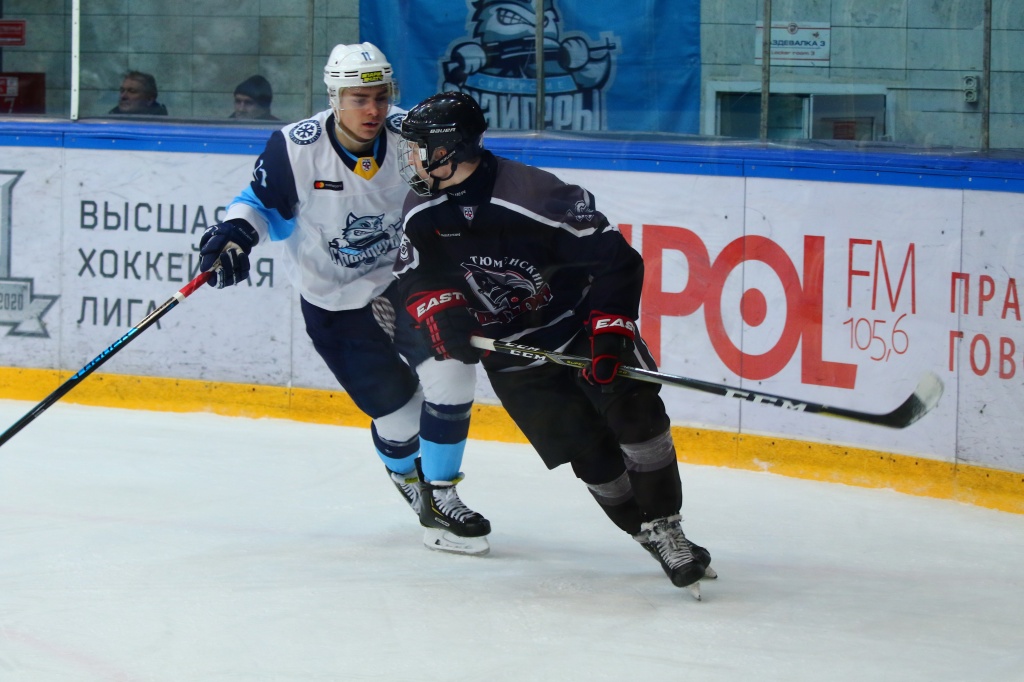 Sibirskie Snaipery grabbed the game by the horns right from the get-go and began spraying Alexei Shchetilin with shots from all over the place. In the first half of the opening period of play Tyumensky Legion were able to keep the visitors at bay while at even strength but then they took two penalties in a row. However, home team pulled through. Novosibirsk outshot the opposition by more than three times but couldn’t open the scoring in the first period.

Tyumen managed to put together a few good offensive rushes in the second frame and five minutes in Artyom Pylayev put the Legion in the lead. Novosibirsk picked up the pace after that and by midway through the stanza gained the lead as Danila Davydov and Georgy Yurov found their targets. Having gained the lead, the visitors stayed hot and it led them to scoring another goal – this time Makar Nikishanin hit the twine.

Tyumensky Legion grabbed the momentum again in the third period but they couldn’t capitalize on their scoring chances to thin the margin. As for the visitors, they improved their lead with Alexei Krivchenkov’s tally midway through the stanza. Tyumensky Legion cooled down after that, which allowed Sibirskie Snaipery spend more time in the offensive zone. Late in regulation Makar Nikishanin scored his second goal of the game to set the final score. Sibirskie Snaipery win 5-1.

Altay defeat Irbis in the shootout 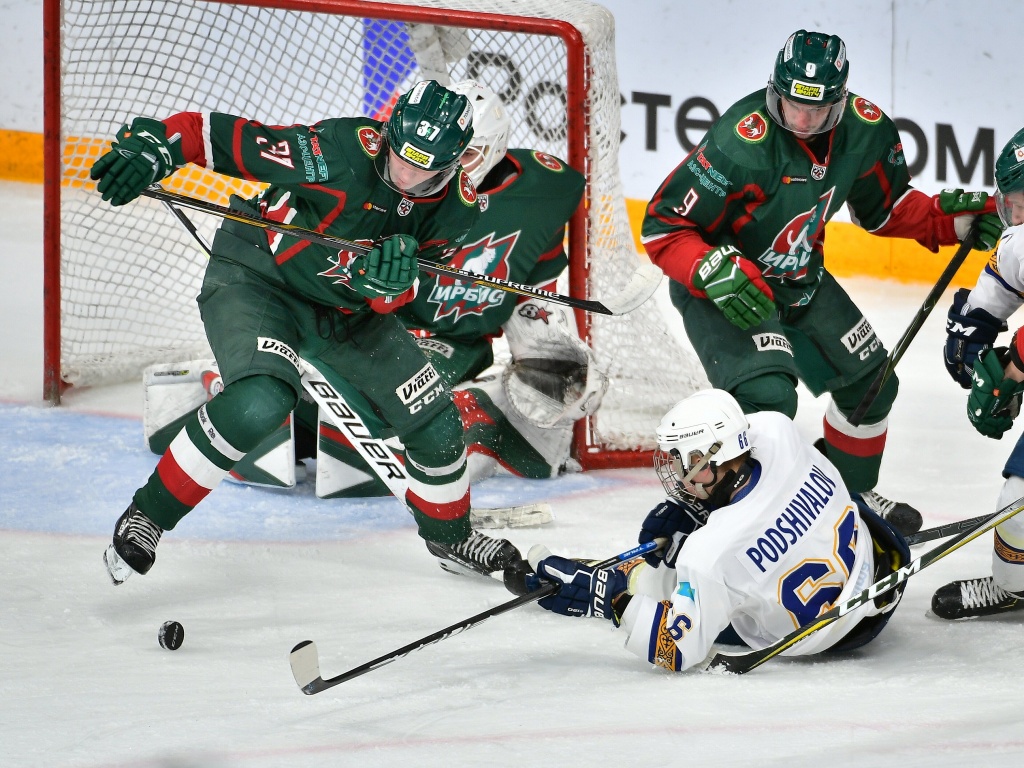 In the first period of play in Kazan the game was rather close as both teams were creating scoring chances. Eight minutes in Irbis Kazan managed to get on the bard – Razat Timirov put home team in the lead. The teams continued to trade scoring chances but were unable to score anything else before the intermission.

In the second frame Altay Ust-Kamenogorsk increased the pace of the game and German Shaporev tied the game up seven minutes in. However, almost right after that Emil Galiaskarov put Irbis back in the lead. Kazan couldn’t convert on a 2-man advantage midway through the period but after going down a man for five minutes not only they didn’t allow a goal but, on the contrary, got themselves another one – Ruslan Galimzyanov scored shorthanded to improve Kazan’s lead.

The visitors picked up the pace once again after the intermission and managed to find the equalizer in no time. First Nikita Volosenkov capitalized on a power play and a little later German Shaporev scored his second of the game. The teams opted for cautious hockey right till late in regulation, trying to avoid mistakes. Altay went on to punish Irbis for taking a penalty. Ivan Komarovsky gave the visitors their first lead of the night. However, Kazan responded with a final push and with a minute remaining to play on the clock Denis Komkov slipped one past Vladislav Nurek to bring it back to even. The game went to overtime and then to the shootout. Ust-Kamenogorsk converted on three of their attempts and walked away victorious. 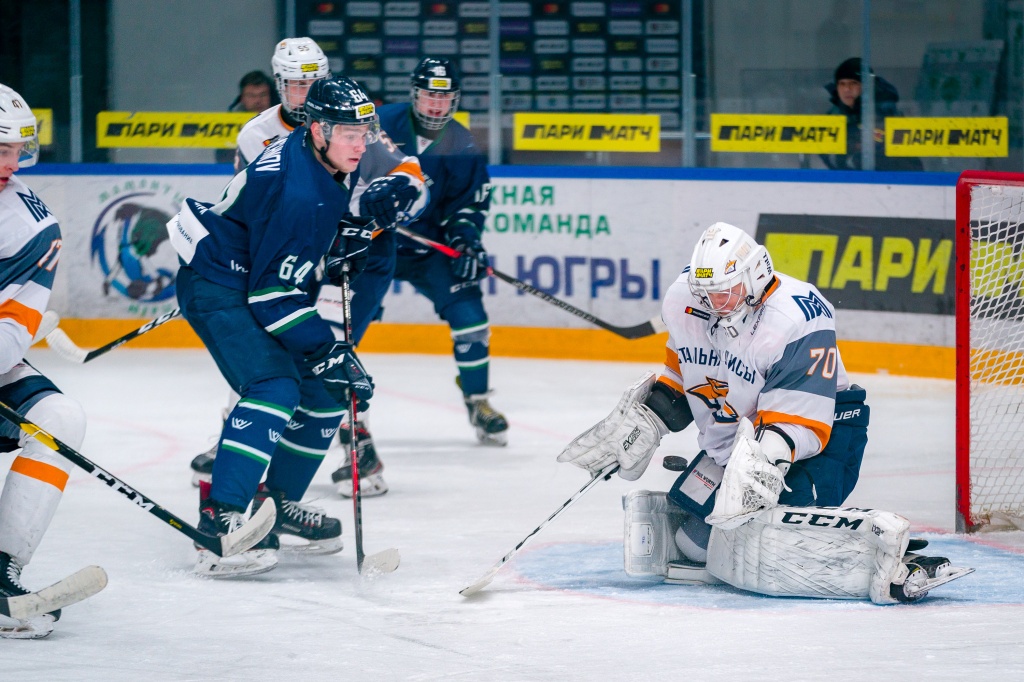 Home team put their money on an aggressive start. The ‘Mammoths’ managed to pin Stalnye Lisy Magnitogorsk to their net right away and put together several good scoring chances. Mamonty Yugry went on to score three goals in the opening eight minutes of action – first Nikita Chusovitin got one past Nikita Kamyshnikov, a little later Alexander Dryagilev doubled the lead and soon after that Kirill Rudenko made it a 3-0 hockey game. After that Gleb Moiseyev replaced Kamyshnikov in goal but he got solved soon enough as well – Kirill Popov scored a power play goal for Mamonty Yugry. The visitors got a goal back late in the period as Edgar Varagyan got on the board but that was all Khanty-Mansiysk conceded before the intermission.

However, the pace of the game slowed down in the second period. Mamonty Yugry played smart with the puck and didn’t let Stalnye Lisy get closer to them on the scoreboard. Gradually the teams picked up the pace but it led to no goals either. Home team failed to capitalize on their solo power play opportunity, while ‘Steel Foxes’ wasted two man advantages. As a result, the teams went into the third stanza with Khanty-Mansiysk still protecting the 4-1 lead.

Early in the third period Magnitogorsk found themselves on a 2-man advantage but home team managed to survive it and went on to score their fifth goal of the game – Bogdan Senotov hit the target. The game calmed down after that and Mamonty Yugry worked the clock till the very end. Late in regulation Kirill Popov scored his second of the game to improve Khanty-Mansiysk’s chances of making the playoffs this season.

Sputnik edge top team of the East in overtime 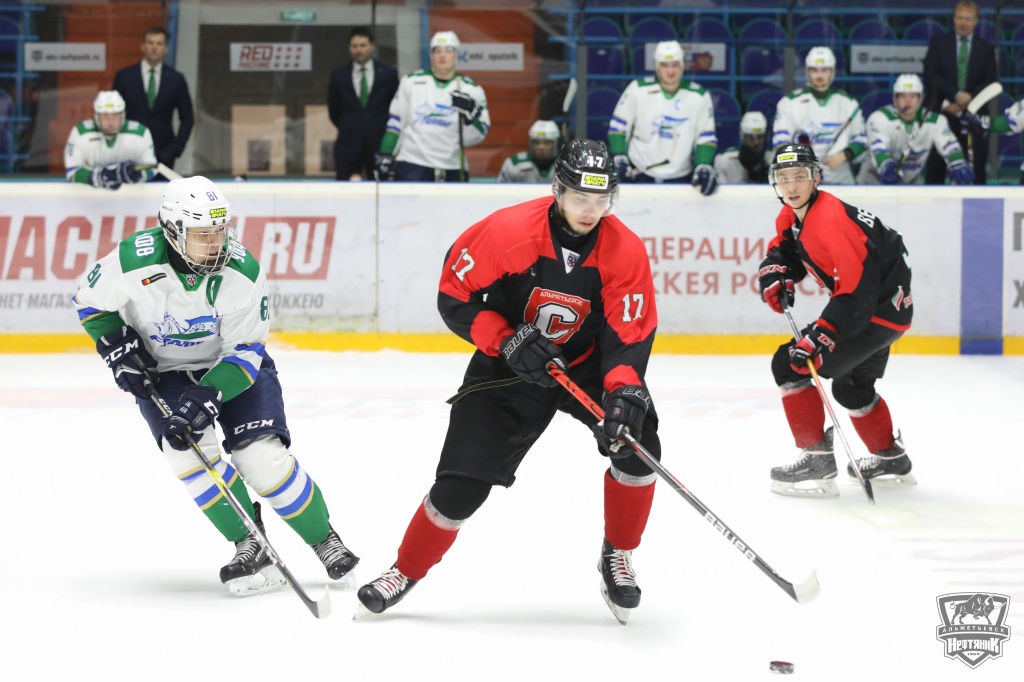 Both teams opted for cautious hockey in the opening period of play. Despite the fact that both Sputnik Almetyevsk and Tolpar Ufa had power play opportunities as well as spending some time in 4-on-4 format, there weren’t many scoring chances prior to the intermission. As a result, home team enjoyed the only goal over the stretch as Timur Zakirov found the back of the net.

Tolpar managed to establish control on the game after the intermission but neither they, nor the home side were able to create many good quality scoring chances. Early in the period Almetyevsk found themselves shorthanded but Rail Nasyrov helped his team kill off the penalty. The teams combined for a few chances by the halfway mark of the period but couldn’t convert on either of them. Sputnik carried a narrow lead into the third stanza.

Ufa gradually increased their pressure on Almetyevsk in the third period. By midway through the frame they took a few dangerous shots but Sputnik netminder was on top of his game every time. However, late in regulation Tolapr did manage to eke out a goal – with two minutes on the clock Yegor Suchkov got on the board. The game had to be decided in overtime and Aidar Galimov scored the winner for Sputnik. 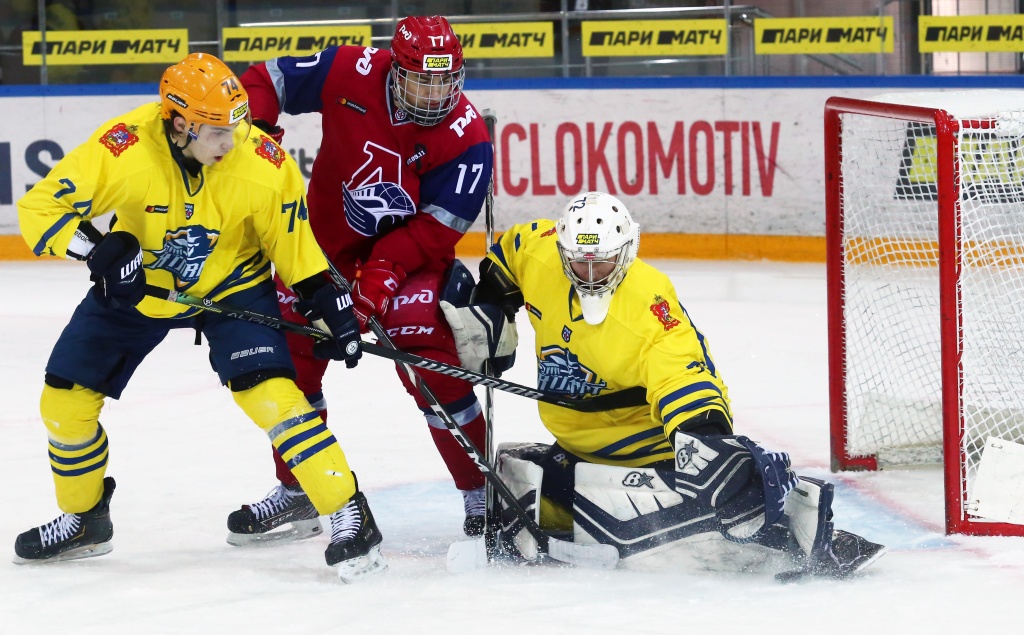 The only Western Conference game of the day began with a severe shortage of scoring chances. First half of the opening period of play went by smoothly as neither of the teams willed to make any mistakes. Atlant Moscow Region looked more aggressive and picked up the pace midway through the frame. With five and a half minutes remaining on the clock the visitors got in the lead as Artyom Kanayev wristed it home. Loko Yaroslavl woke up right after that and Maxim Denezhkin slipped it past Danil Fomin from the slot to tie it up.

Yaroslavl found themselves down a man early in the second period but that didn’t stop them from grabbing the lead. Alexander Daryin motored into the zone and put Loko in front. Soon after that Yaroslavl scored another goal – this time at even strength. Maxim Beryozkin hit the target. Midway through the period Loko converted their dominance into another goal – Maxim Denezhkin scored his second of the game with a shot from a poor angle. Mytischi couldn’t match Loko and Yaroslavl carried a 4-1 lead into the third period.

Early in the third frame the visitors got another goal back – Matvey Kokovin one-timed it home off a great setup. Moscow Region did their best to turn it around after that but Loko managed to regain control of the game. They put together several good scoring chances and the visitors got bailed out by a post in one instance. Yaroslavl got two consecutive penalties late in regulation but it didn’t prevent them from winning the game. 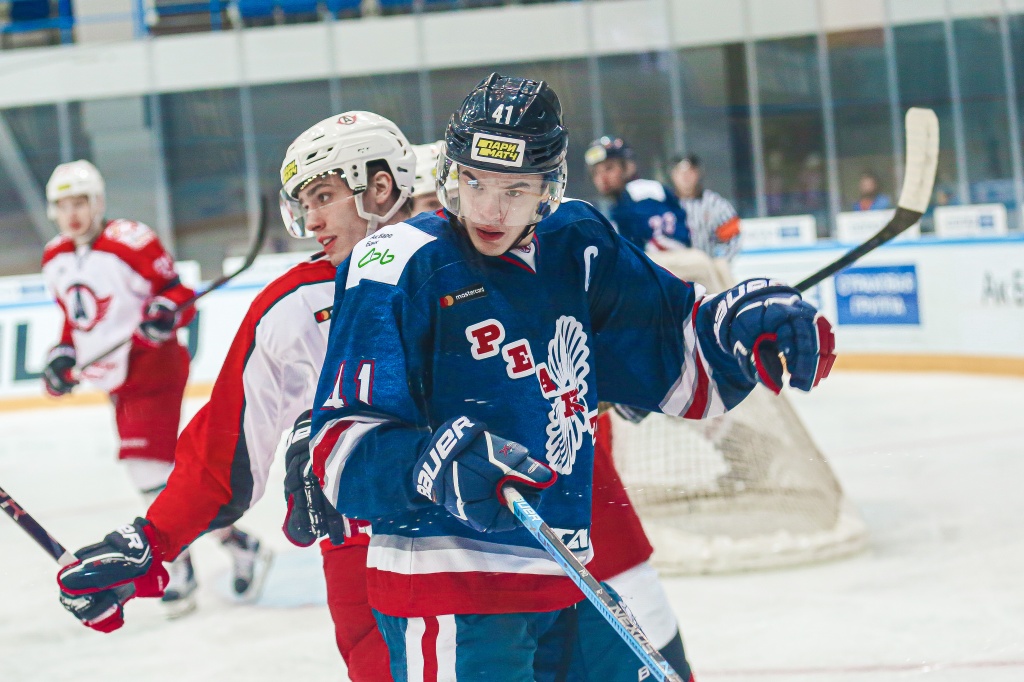 First period of action in Nizhnekamsk featured a fast-paced game – both home side and the visitors exchanged great scoring chances but Yaroslav Ozolin and Georgy Romanov bailed out their respective teams one time after another. Avto Yekaterinburg had the momentum on their side, while Reaktor Nizhnekamsk responded with transition plays. However, despite all of that there was no scoring in the first period.

There weren’t any goals in the first half of the second frame either, even though both teams had power play opportunities. Nevertheless, the teams combined for three goals after that. First Ilya Zakharov put Avto in the lead, a minute later Danil Mikhailov got a tally or Reaktor to tie it up, but just 56 seconds later the visitors regained the lead as Danil Mylnikov hit the twine. The teams elevated the pace of the game after that. Home team did their best to level it before the intermission but they couldn’t capitalize on their scoring chances, including those on a power play.

Nizhnekamsk threw everything they could at Avto in the early minutes of the third period. They managed to have possession for long stretches in the offensive zone and midway through the frame Ilya Paranin sent it past Georgy Romanov. For the remainder of the game both teams tried to get back in front. Yekaterinburg got a power play opportunity with three and a half minutes but were unable to convert on it, while Nizhnekamsk put together a nice play in the final minute and Andrei Chivilev scored the game-winning goal. Reaktor win 3-2. 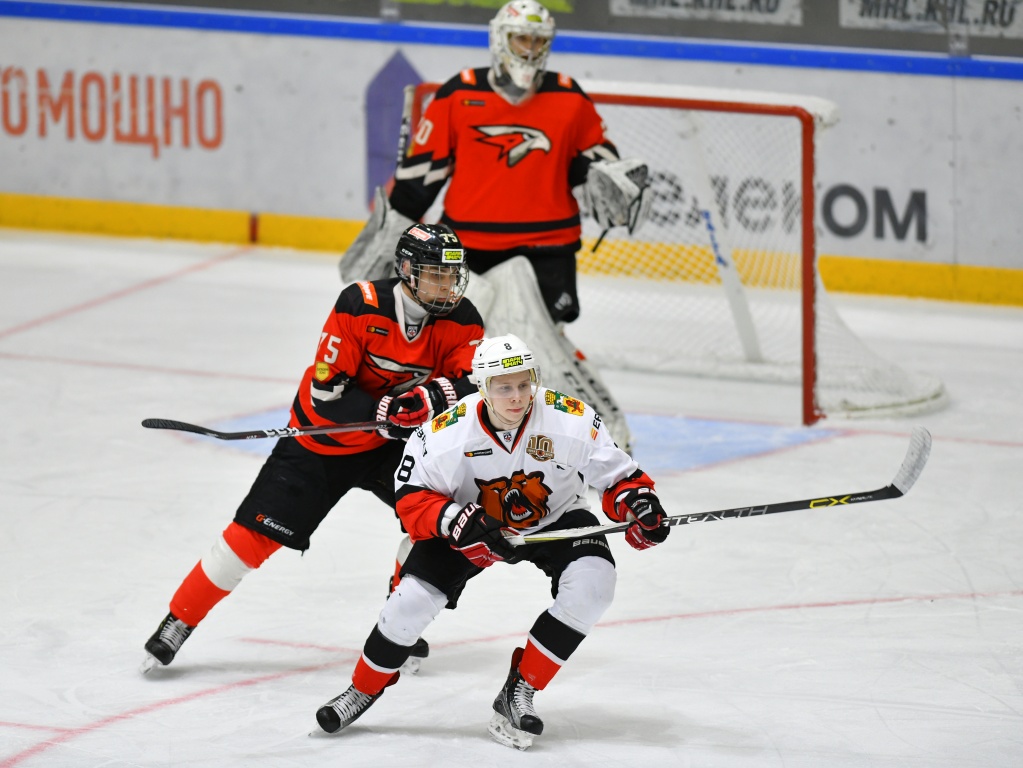 First game of the day took place in Omsk. Under attentive glare of Bob Hartley, Omskie Yastreby grabbed the momentum right out of the gate. Home team found themselves on a power play in the early minutes but scored their first goal of the game at even strength. Alexei Prokopenko put the ‘Hawks’ in the lead. Omsk continued to dominate and with five minutes on the clock Arseny Gritsyuk doubled the lead for the home side. Nevertheless, the ‘Bears’ also managed to solve Georgy Dubrovsky – Kirill Shumilov got the marker.

After the intermission the visitors did their best to turn the game around but Omskie Yastreby continued to have the momentum on their side, not letting Kuznetskie Medvedi get any closer. After killing off two penalties, the Hawks picked up the pace and scored twice in a span of 30 seconds as Vladimir Mashkov and Alexei Prokopenko got the markers. Thus home team had a 3-goal lead coming into the third period.

Kuznetskie Medvedi got more aggressive after the intermission and Vitaly Rassokhin got a goal back. However, Omskie Yastreby quickly turned the momentum around and restored the 3-goal margin midway through the period as Semyon Astashevsky found the back of the net. Later on Matvey Zaseda got another marker to further solidify the lead. Gafar Satarov scored another goal for Kuznetskie Medvedi but that didn’t stop Omskie Yastreby from enjoying a solid win and clinching the playoffs.