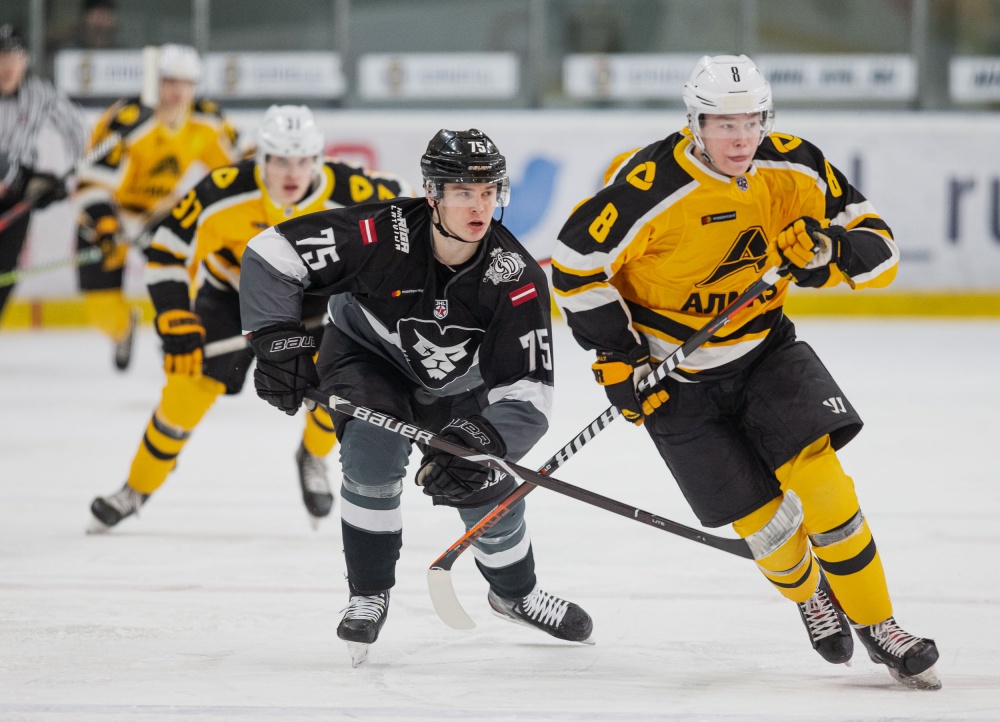 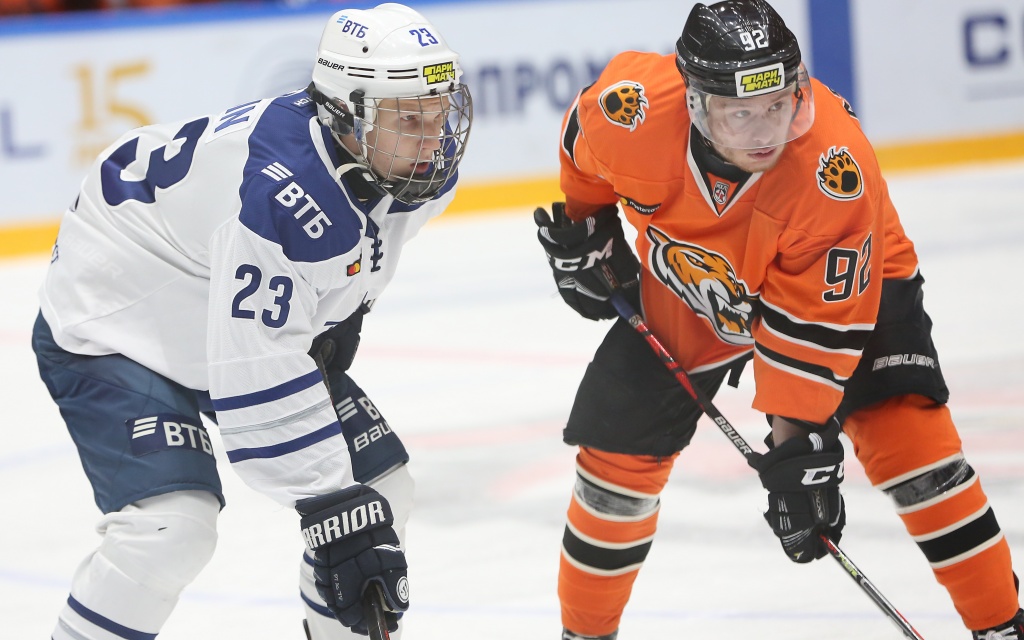 Amurskie Tigry played hosts to JHC Dynamo Moscow in Khabarovsk. The latter feel confident enough as they currently occupy the sixth place in the Western Conference. Yegor Zvonov put the visitors on the board nine minutes in. Dynamo went on to score two more in the second period of play as Matvei Sumin and Mark Katsevich found the back of the net. The ‘Tigers’ got a goal back as Ilya Kozhykhov hit the target.

Early in the third period Yegor Antonov managed to pull his team back to within one but soon after that home team got a penalty and Semyon Barinov converted on the ensuing power play. Late in the period Dynamo scored twice in a span of 12 seconds – Katsevich got his second of the game, while Anton Kosolapov added another one. All Amurskie Tigry could get after that was a tally by Yegor Mozharov. Dynamo take it 6-3 on the road. 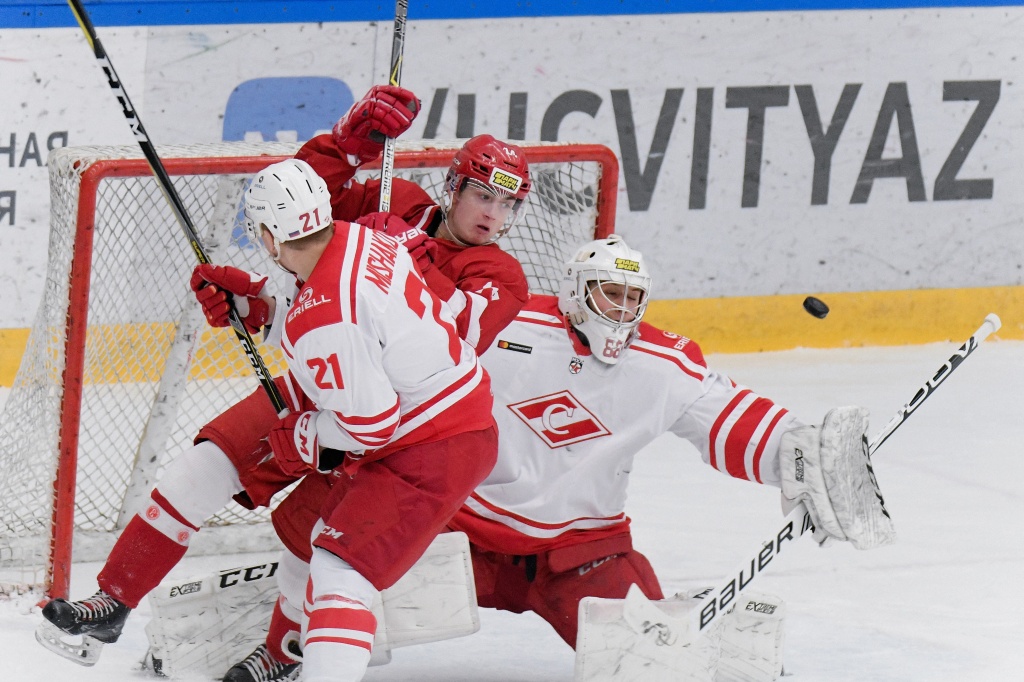 JHC Spartak Moscow faced Russkie Vityazi in Chekhov, Moscow Region. The visitors opened up the scoring seven minutes in – one of the top players on the red-and-white, Ruslan Novruzov, sent it past Vladislav Zaitsev. Russkie Vityazi were piling up penalties in the second frame but Spartak managed to improve their lead only late in the period and they did it at even strength – Kirill Tagirov, who picked up an assist on Novruzov’s marker, hit the twine, while Novruzov drew a  helper this time around.

The visitors got a bench minor for too many men on the ice and Andrei Legalin scored a shorthanded goal against Spartak’s neighbors in the standings. Moscow Region team failed to get anything by Dmitry Kulikov, who went on to stop all 27 shots he had to face to earn a shutout win.

Atlant lose to SKA-Varyagi on the road 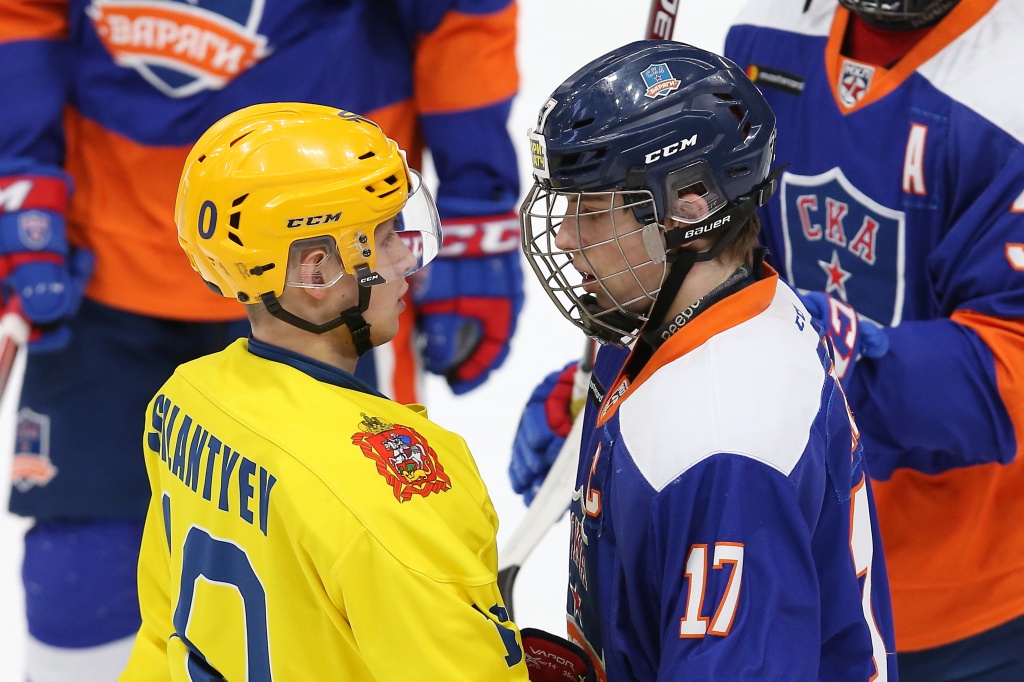 SKA-Varyagi met JHC Atlant Moscow Region at SC Hokkeyny Gorod in St. Petersburg. Home team to convert on their initial power play attempt of the game – Ilya Kudryashov fired it into the back of the net from the mid-point. The visitors got back even with just two seconds remaining to play till the first intermission – Daniel Usmanov brought it back to even on the scoreboard. Home team grabbed the momentum in the second frame and regained the lead as Matvei Gorbushin scored on a power play.

Atlant spent most of the third stanza in the offensive zone but couldn’t beat Kirill Obyskalov. When the visitors pulled their netminder for the extra-attacker, Matvei Kabush set the final score with the empty-netter. SKA-Varyagi win 3-1 on home ice. 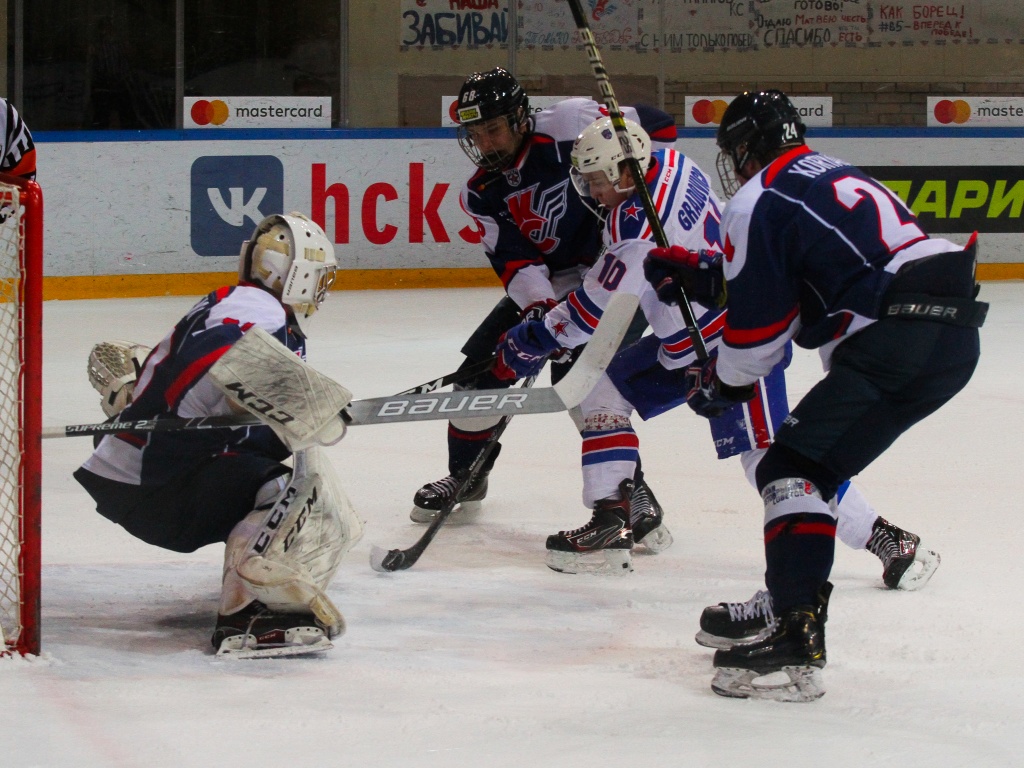 After the lost from SKA-Varyagi, SKA-1946 St. Petersburg head-coach Lev Berdichevsky made a lot of roster adjustments. Two Varyagi players joined the top team of the West – recent JHL Challenge Cup participant Nikita Shuidin, who was credited with the game-winning goal in the game against SKA-1946, played his second game for the 46’s, while Alexander Katayev made his debut for the team in Setun. On top of that St. Petersburg delegated Dmitry Nikolayev, who leads the league in save percentage, between the pipes.

The game between Krylia Sovetov Moscow and the top team of the Western Conference drew a crowd of 2,655 fans. There was no scoring in the opening period of play – both teams were spending a lot of time in the offensive ends, creating scoring chances but their goaltenders were on top of their game.

First goal of the bout came with 90 seconds remaining on the clock until the second intermission. Krylia Sovetov survived on a penalty kill, home team defenseman Ivan Klimkin blocked another shot and made a stretch pass to Rodion Poroshin who burst out of the penalty box. The forward beat Nikolayev, despite the effort from his defenseman, to put Krylia Sovetov in the lead.

‘Army men’ came out hard for the third period. The visitors sprayed Danila Kadochnikov with shots from all over the place, while ‘Soviet Wings’ took just one shot against Nikolayev. As a result, the quantity turned into quality – with eight minutes remaining to play in regulation Artyom Gradovich tied it up. Kadochnikov stopped Otar Sakhokia’s long shot off the boards, but the puck bounced straight to the tape of Gradovich, who buried it on the wide-open net.

The game went to overtime and SKA-1946 did convert their huge advantage into win. Alexander Gordin dangled past two defensemen, beat Kadochnikov and slipped it into the back of the net after a series of rebounds. With this 2-1 win SKA-1946 snap Krylia Sovetov’s 7-game winning streak. Moscow failed to get back into the playoff zone. 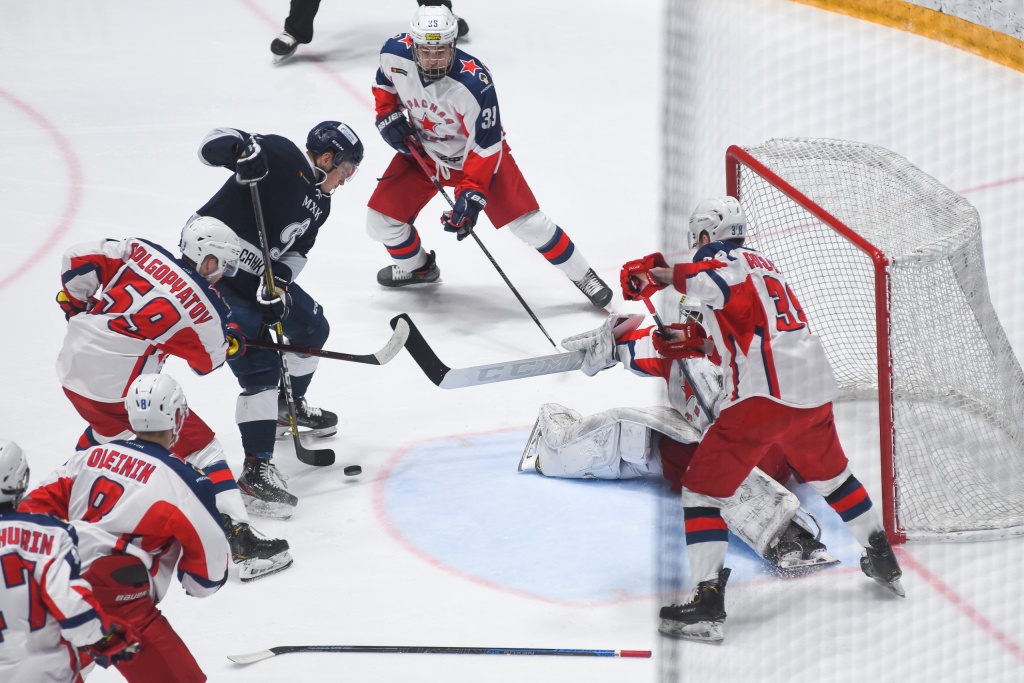 JHC Dynamo St. Petersburg head-coach Yegor Bashkatov couldn’t dress Nikita Buruyanov and Yegor Kokhanin for the game against Krasnaya Armiya Moscow as both players were called up to Team Russia. They were replaced by Pavel Ponosov and Yegor Anisimov. The latter played his first game for Dynamo since participating in KHL All-Star Game.

The game was key for both teams. Traditional rivalry between St. Petersburg and Moscow was augmented by the fact that Dynamo and Krasnaya Armiya are neighbors in the Western Conference standings. The margin between the two was just two points.

Despite the face that home team had the momentum on their side in the opening period of action and took twice as many shots as the opposition (12 against 6), it was Krasnaya Armiya who got on the board first. Pavel Koreshkov beat Makar Chufarov midway through the period. Takhir Mingachyov fired one home from open ice just under the bar in the second frame and beat Chufarov again. Dynamo looked the better team after that and managed to get back even. First Pyotr Yakovlev converted on a power play as he jammed it home from the doorstep. And right after the intermission Yuri Ushakov restored the parity on the scoreboard.

The game followed the same script in the third period. ‘Army men’ established a 2-goal lead by the halfway mark of the frame. Daniil Anop and Yegor Korbit gave the visitors the comfortable lead. However, Moscow couldn’t protect it – Ponosov and Pavel Kuznetsov sent the game to overtime.

Krasnaya Armiya dominated in the extra period of play, taking 5 shots against 0 from the opposition and scored the game-winning goal. Battling for the puck against the boards Dynamo left Artyom Pugachyov unmarked. He received the puck on open ice and meeting no adversary wristed it home on the far-side.

Krasnaya Armiya win their 4th consecutive game to feel even more comfortable at the 4th place in the West. Dynamo saw their 7-game winning streak come to an end.

Ladiya edge Sputnik in the shootout 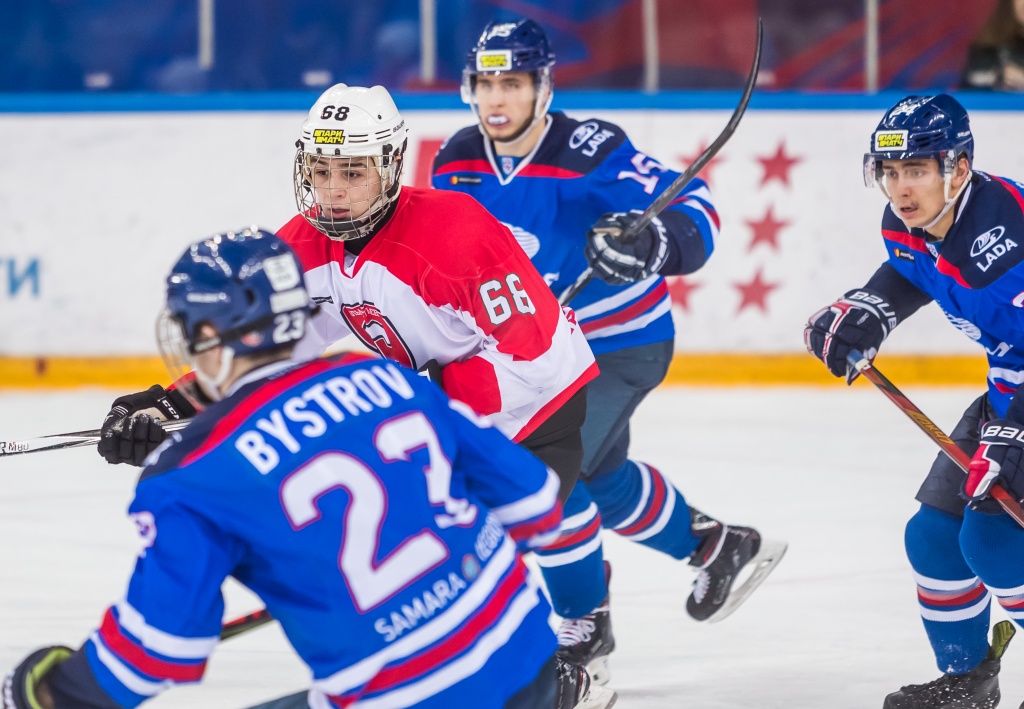 Ladiya Togliatti came into the game against Sputnik Almetyevsk having lost every hope of making the post-season, while the latter continue to battle for a Kharlamov Cup berth. The visitors came out hard for the game and established a 2-goal lead by the second period of play. Aidar Galimov opened up the scoring in the first period as he made Artyom Zabrodin pay for giving up a clumsy rebound. Timur Zakirov improved the lead to 2-0 right after the intermission.

That didn’t faze Togliatti and they turned it around in less than 20 minutes. Midway through the second stanza Dmitry Petrov took a low shot and beat Rail Nasyrov. Four minutes later Stanislav Rangayev restored the parity on the scoreboard. Third frame began with Ladiya scoring their third goal of the game – Artyom Yakutov gave his team their first lead of the night just 90 seconds after the intermission.

Sputnik blew a 2-goal lead but managed to get back in the game. Daniil Melnikov brought it back to even midway through the period to force overtime. Extra period of play solved nothing and the game had to be decided in the shootout. Artyom Zabrodin stopped four attempts, while Nasyrov turned aside just three. Alexander Ponomaryov converted on his shot to give Togliatti their second consecutive win (both in the shootout). Sputnik saw their 4-game winning streak come to an end but remained 8th in the Eastern Conference standings. 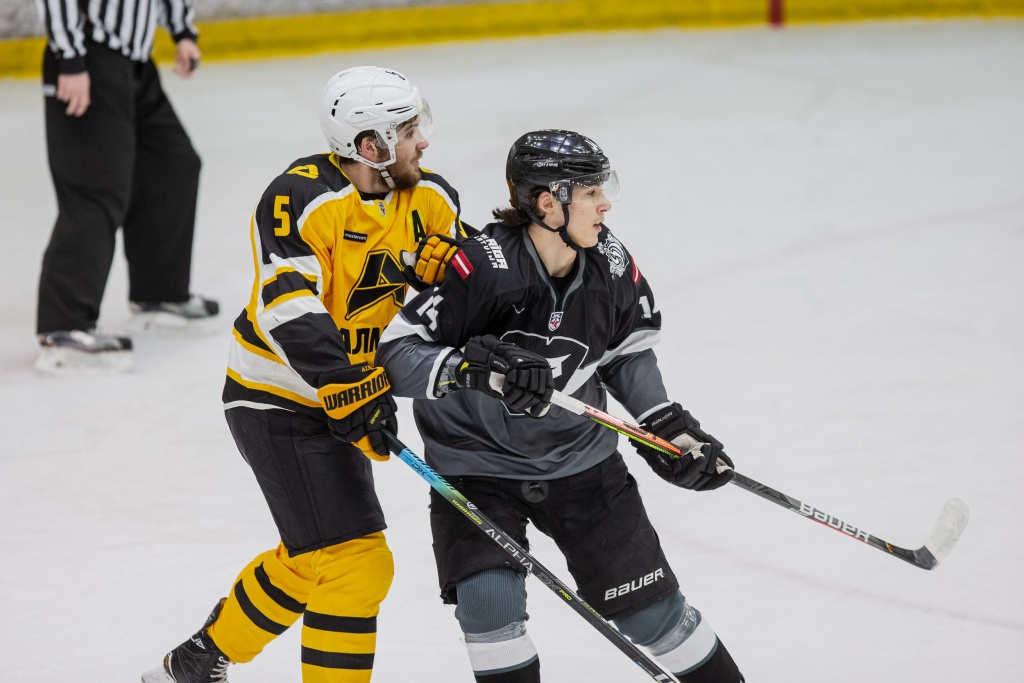 HK Riga’s social media accounts presented the 4-game home stand as ‘battle for the playoffs’. Almaz Cherepovets was the first team to face Latvian side in the stretch. The visitors compete with Loko Yaroslavl for the 2nd place in the Western Conference. Cherepovets came to Latvian capital without Maxim Nevolin, who was called up to Severstal.

First period of play featured no goals but home side got a quick one in the second – Mikus Mintautiskis sent one past Anton Rybalkin. Riga improved their lead early in the third period. First they passed it around for a while on a power play and then hit the twine at even strength. Evgeny Stavrovsky’s men got pinned to their net and let the opposition put together a series of short passes. Seven minutes later Latvian team scored their third goal of the night, all but guaranteeing themselves a win. Richards Ligis beat his defenseman to create a 2-on-1 rush. Rybalkin handsomely did the splits but still couldn’t stop the one-timer by Kristaps Skrastins.

All visitors could get in this one was steal the shutout from Janis Voris with a goal late in regulation – Yegor Chizhikov got the consolation marker. Home team still had the last word in this one – in the last minute of play Raimonds Vilkoits’ side put together a nice passing play to set the final score. Riga could have scored even more goals but their 3-on-0 rush ended with a shot against the post. HK Riga win 4-1 to snap Cherepovets’ 4-game winning streak and rise back to the playoff zone. 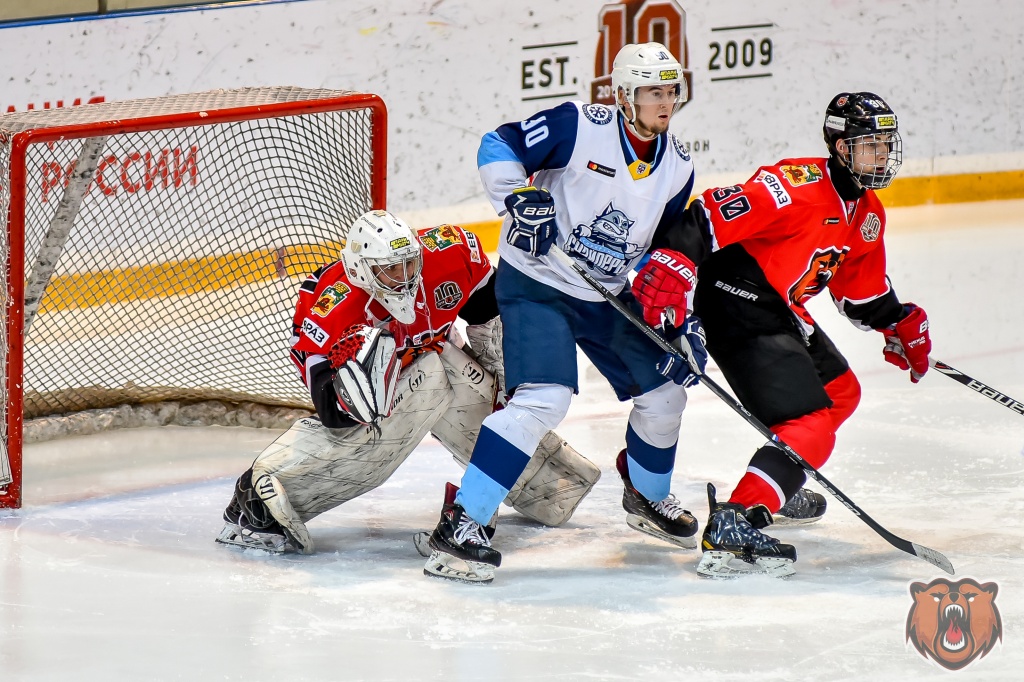 In the first game of the day Sibirskie Snaipery steamrolled over their rivals Kuznetskie Medvedi, who had no motivation coming in as they had lost every hope of making the playoffs this year. The visitors scored just twice – Makar Nikishanin and Dmitry Gundyrev got the markers. The ‘Snipers’ went on to dominate in the second frame – Georgy Yurov and Nikita Potapov scored two goals each, while Sergei Dubakin, Ilya Pastukhov and Alexei Krivchenkov further improved the lead.

Home team responded with a tally by Vitaly Rassokhin, while Mikhail Kuzmin was relieved by Makar Karmalin only to get back in action again when it became evident that the 17-year-old netminder wasn’t ready for the turn of events. Novosibirsk continued to do what they pleased. Danil Davydov converted on a power play and after Nikishanin got his second marker of the game, so did Davydov. Krivchenkov became the fourth player to score his second goal of the game and Sibirskie Snaipery won 13-3 on the road.