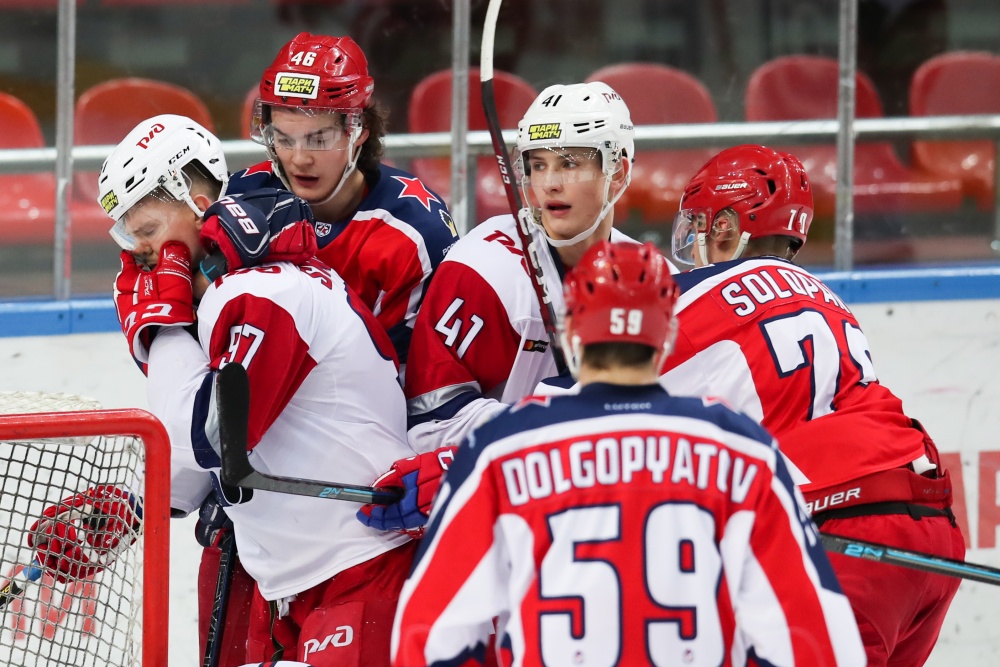 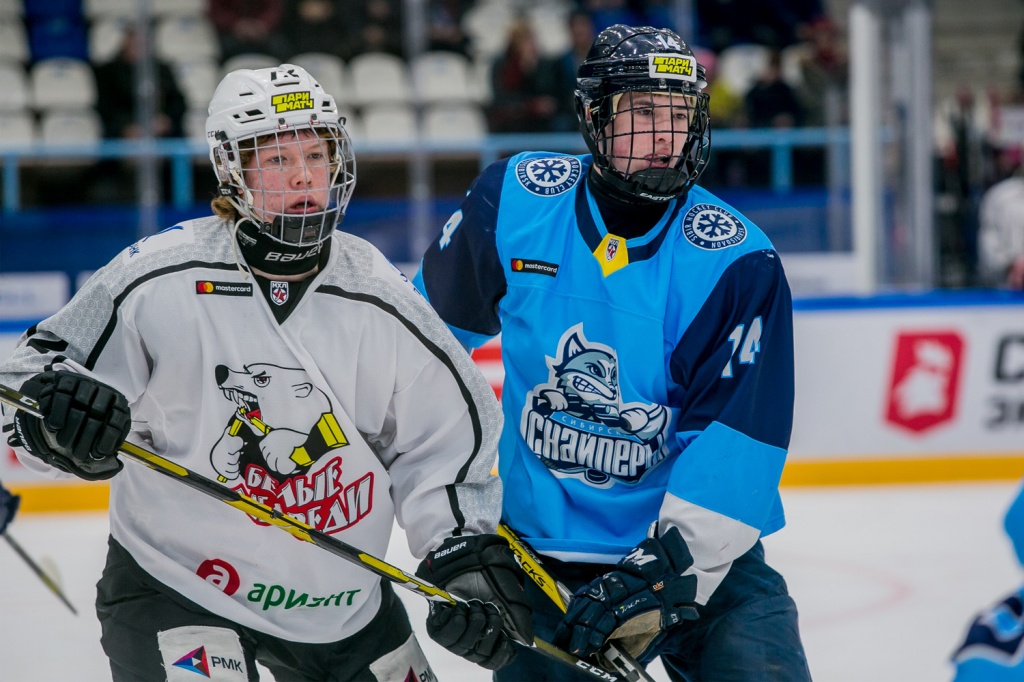 In Novosibirsk, where Sibirskie Snaipery played hosts to Belye Medvedi Chelyabinsk, it was also the home side that walked away victorious. Novosibirsk outshot the opposition in the opening period but managed to get on the board only in the second – Makar Nikishanin sent it in off assist by Mikhail Romayev. Home team capitalized on Alexei Krivchenkov’s penalty as well – Kirill Zatonskikh, who was selected as the top defenseman of the league past week, scored a shorthanded goal.

Chelyabinsk managed to get a goal back before the intermission as their top-scorer Danil Zinovyev found the back of the net. However, that was the only goal they would score in the game. Dmitry Ovchinnikov set the final score 13 minutes into the third stanza. Sibirskie Snaipery win 3-1 to extend their streak to three games. 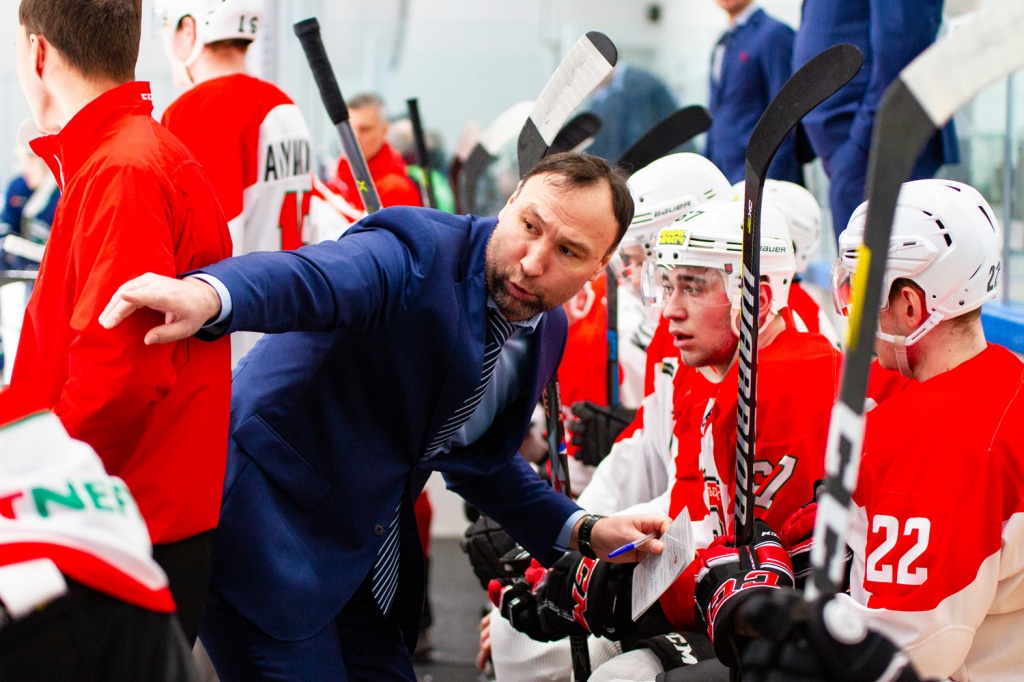 Another losing streak came to an end in Khanty-Mansiysk. Sputnik Almetyevsk, that had lost five straight coming in, managed to beat Mamonty Yugry – last season’s bronze medalists. There was just one goal scored in the opening period of play – Rishat Akhmetzyanov solved Konstantin Kuzmaul 14 minutes in. Almetyevsk killed off a penalty in the second period and doubled their lead with a tally by Daniil Melnikov.

13 minutes into the third period Sputnik got their second penalty of the game and Mamonty Yugry went on to convert on it – Kirill Popov pulled his team back to within one. The visitors did everything they could to find the equalizer but the score remained unchanged till the final buzzer. Sputnik enjoy their first win since mid-December.

Almaz beat Atlant in the shootout 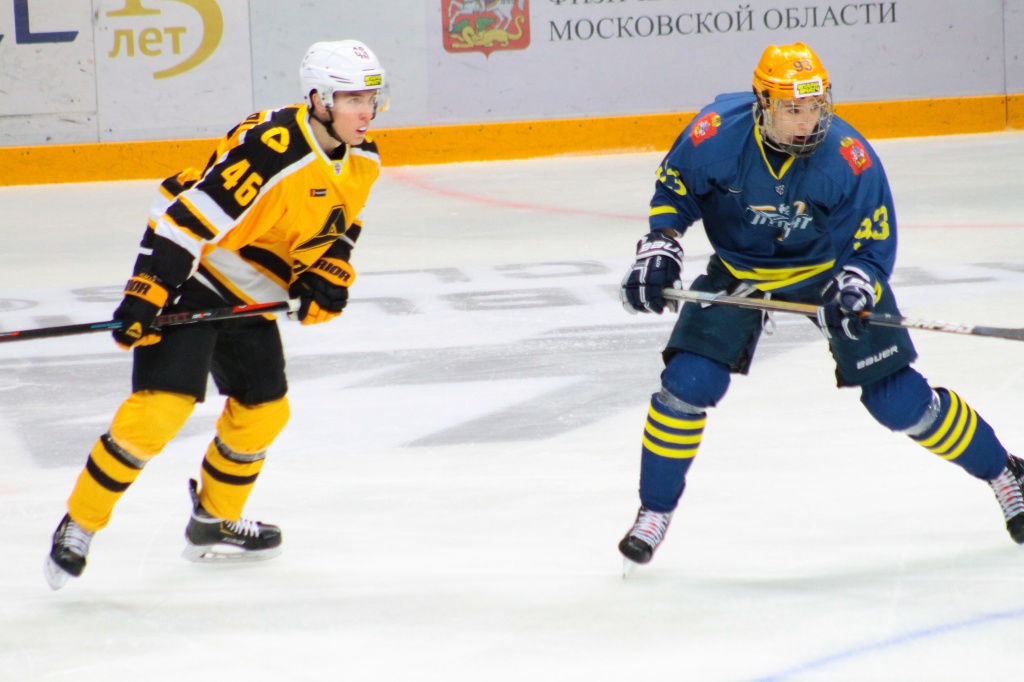 The teams were rather close in the opening period of play in Mytischi, Moscow Region. Both Atlant and Almaz Cherepovets opted for fast-paced hockey and created a lot of scoring chances. Nevertheless, they couldn’t break the deadlock right till the final moments of the period, largely due to stellar performance by goaltenders Platon Zadorozhny and Denis Rybalkin. However, Mytischi gradually took the momentum and with two minutes on the clock Daniil Shushin finally put the home side in the lead.

After the intermission Atlant continued to impose their will. Cherepovets couldn’t score even on a power play – Dmitry Silantyev doubled the lead for Moscow Region with a shorthanded goal. Later in the period Atlant found themselves down a man twice but Almaz couldn’t convert on either attempt. Home team headed into the third period with a comfortable 2-0 lead.

Nevertheless, the visitors managed to bring it back to even rather quickly in the third frame. Yegor Chizhikov and Nikita Lukhovsky got a power play tally each. Cherepovets stayed aggressive after that as well, looking to get a win but got a penalty late in regulation. Atlant couldn’t capitalize on the chance and the game went to overtime. Extra period of play solved nothing so it had to be decided in the shootout. Vladislav Kuznetsov was the only player to convert on his attempt. Almaz win 3-2 in the shootout.

Krasnaya Armiya lose to Loko by a narrow margin 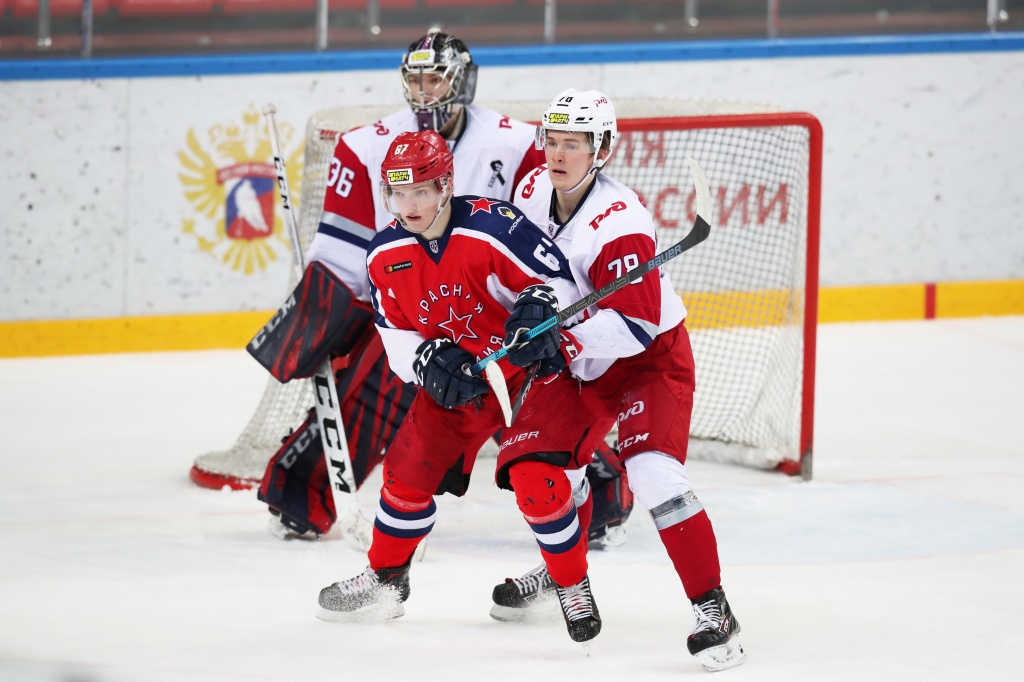 Home team grabbed the momentum right from the get-go. They were able to establish good possession and began generating scoring chances. Midway through the period Krasnaya Armiya Moscow scored a goal but it was disallowed after video review. Moscow stayed hot and continued to pressure Loko Yaroslavl defense. However, Vladislav Okoryak didn’t let anything get past him in the first period.

The visitors managed to even out the game in the second period. The teams kept trading scoring chances but both goaltenders were able to cope with it. The visitors were bailed out by a bar on one occasion as Nikita Dolgopolov grazed it. As a result, there was no scoring in the frame either.

The visitors managed to get in the lead in the third stanza – Roman Bychkov capitalized on a power play opportunity. Moscow did their best to salvage the game but the visitors kept them at bay and enjoyed a win by the narrowest margin. 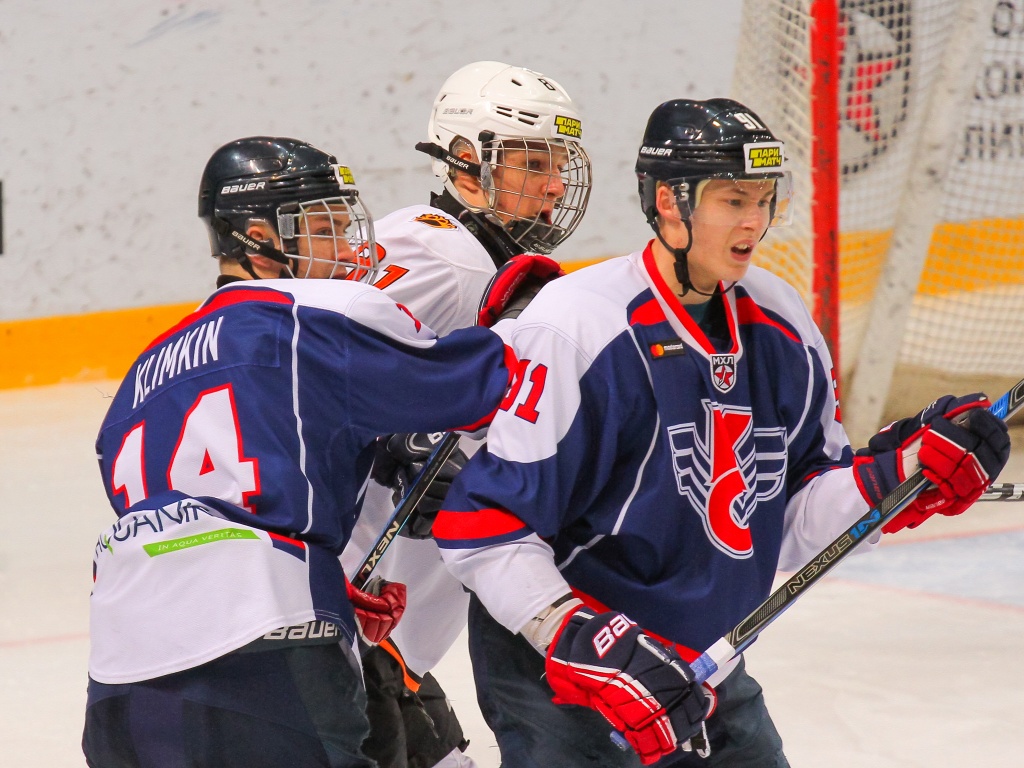 Krylia Sovetov Moscow opened up the scoring in the first minute of the game – Vitaly Lebyodkin sniped one home. However, despite that the visitors were able to match the opposition from the get-go. Midway through the period Moscow got a power play opportunity but Danila Uvarov sent the puck into his own net on a delayed penalty call. Krylia Sovetov picked up the pace after that and regained the lead late in the frame – Evgeny Pogonchenkov found the back of the net.

The teams were close in the second stanza as well. Both ‘Tigers’ and ‘Soviet Wings’ failed to capitalize on their respective man advantages early on and the score remained unchanged for a while. However, then Krylia Sovetov found themselves down a man and Nikita Linnik tied it up for Khabarovsk once again.

Opponents were evenly matched in the third period as well and did their best to score in transition. There was no scoring in the early minutes but then Ivan Guskov helped Krylia Sovetov get back in the lead. The visitors did everything they could to find the equalizer but Evgeny Pogonchenkov sealed the deal with an empty-netter. Krylia Sovetov win 4-2. 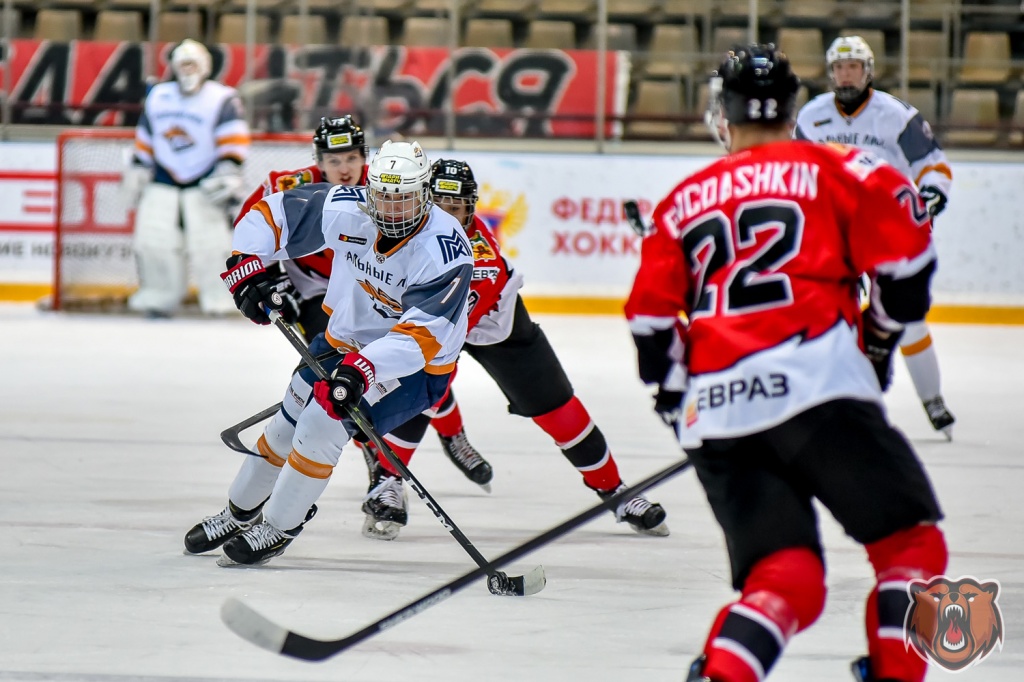 Kuznetskie Medvedi finally snapped their 10-game losing streak. Moreover, they beat the perpetually mighty Stalnye Lisy Magnitogorsk. ‘Steel Foxes’ found themselves down 2-man 10 minutes into the game and home team got on the board with a goal by Andrei Sokolov. Stalnye Lisy also made the ‘Bears’ pay for getting a penalty. Danil Kozhedub barely had enough time to sit down on the bench in the penalty box as Ruslan Gospodynko found his target.

Next penalty also yielded a goal – Dmitry Sheshin put the visitors in the lead. Despite Magnitogorsk having the momentum on their side in the second period, Stalnye Lisy allowed the only goal of the frame – Mikhail Bogdashkin scored yet another power play goal. Artyom Morozov secured the long-awaited win for Kuznetskie Medvedi as he hit the twine ten minutes into the third period. This time home side were able to protect the lead.