Ten regular season games took place in Parimatch Junior Hockey League on January 5th. Teams of both conferences hit the ice. We take a look at Sunday action in this review. 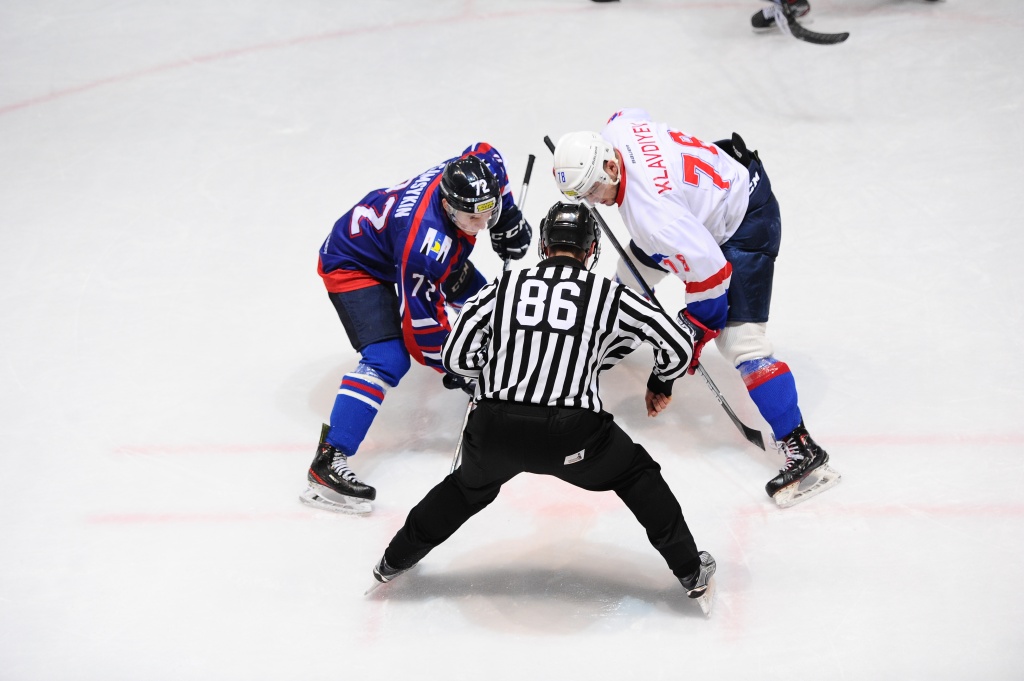 Sakhalinskie Akuly once again played hosts to ORG Junior Beijing. The day before Yuzhno-Sakhalinsk almost let the opposition gain their first points of the regular season but this time around they didn’t beat about the bush. Dmitry Zherebkin and Alexei Bozunov got a tally each to put the ‘Sharks’ up by two midway through the period. Home team scored two more goals in the second period – Yegor Ageyev cashed in along with Bozunov who got his second of the game.

Early in the third period of action Rostislav Zinovenko replaced Vladislav Pakin in goal for the ‘Rhinos’. Sakhalinskie Akuly solved him right away – Danil Moskalyov found his target. As for Kirill Kuzmenko, he couldn’t carry the donut to the finish line and Artyom Klavdiyev got a consolation marker for ORG Junior. Yuzhn-Sakhalinsk celebrate a 5-1 win.

HK Riga erase a 3-goal deficit but lose to Taifun 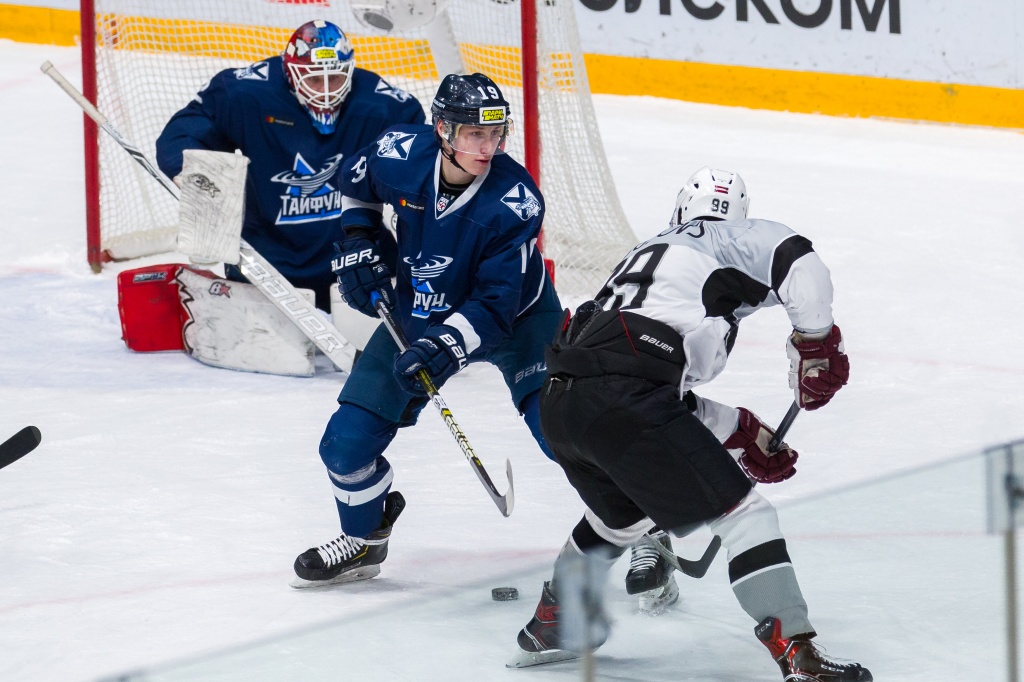 Second team from Russia’s Far East also enjoyed a win this Sunday but they had to work much harder for it. Taifun Primorie Region faced HK Riga. While the game was even in the first period, it featured no goals. Something went wrong for the Latvian team in the second period and they allowed three consecutive goals. Ivan Lapshin, Dmitry Kozlov and Pavel Yelizarov scored for Primorie Region.

The visitors engaged in pursuit and early in the third stanza Antons Sinegubovs along with Mikus Mintautiskis pulled Riga back to within one. Bulat Galimov tied it up 3-3 midway through the frame. Nevertheless, home side got the win as Alexander Trapeznikov hit the twine. Taifun win a difficult game 4-3. 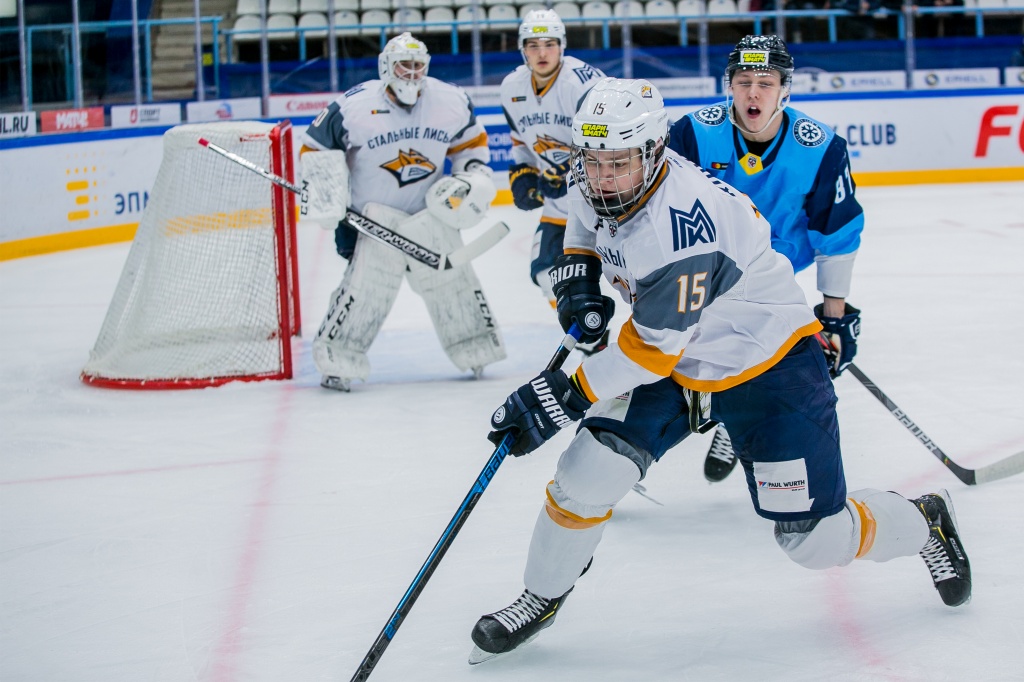 An exciting game took place in Novosibirsk where Sibirskie Snaipery took on Stalnye Lisy Magnitogorsk. Home team played solidly and better converted on their scoring chances. Four minutes into the game Dmitry Ovchinnikov opened up the scoring and soon after that Makar Nikishanin doubled it. Ovchinnikov went on to score his second goal of the game in the following period, while Sergei Dubakin chipped in a tally of his own. Late in the period the visitors gave in to their emotions and Danil Pyatin got a game misconduct for roughing.

Magnitogorsk did manage to get on the board as well. Dmitry Sheshin scored one while both teams were down a man and then he scored his second of the game late in regulation on a power play. Stalnye Lisy pulled their goaltender for the extra-attacker but Danil Davydov scored on the empty net to seal the deal. Sibirskie Snaipery enjoy a solid 5-2 win. 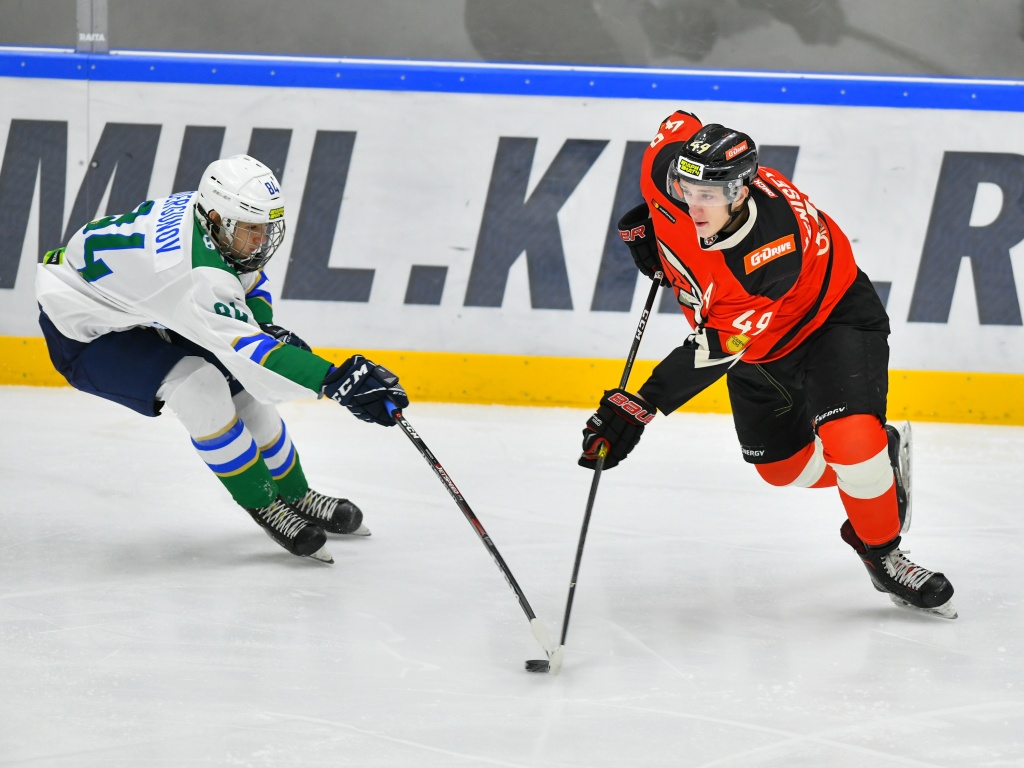 Top teams of the Eastern Conference clashed in Omsk as Omskie Yastreby played hosts to Tolpar Ufa. The ‘Hawks’ had a chance to close the gap between them and Tolpar to just three points with a win. However, the ‘greens’ had other plans. First goal of the game came 12 minutes into the second period – Sergei Varlov sent it past Georgy Dubrovsky. The narrow margin widened nine minutes into the third period as Danil Alalykin made it 2-0 for the visitors.

Omskie Yastreby responded with a snipe by Matvei Zaseda but that was their only goal in the game. Late in regulation Danil Aimurzin set the final score. With this win Tolpar widen the gap between them and Omskie Yastreby to seven point. Nevertheless, the ‘Hawks’ have two games in hand. 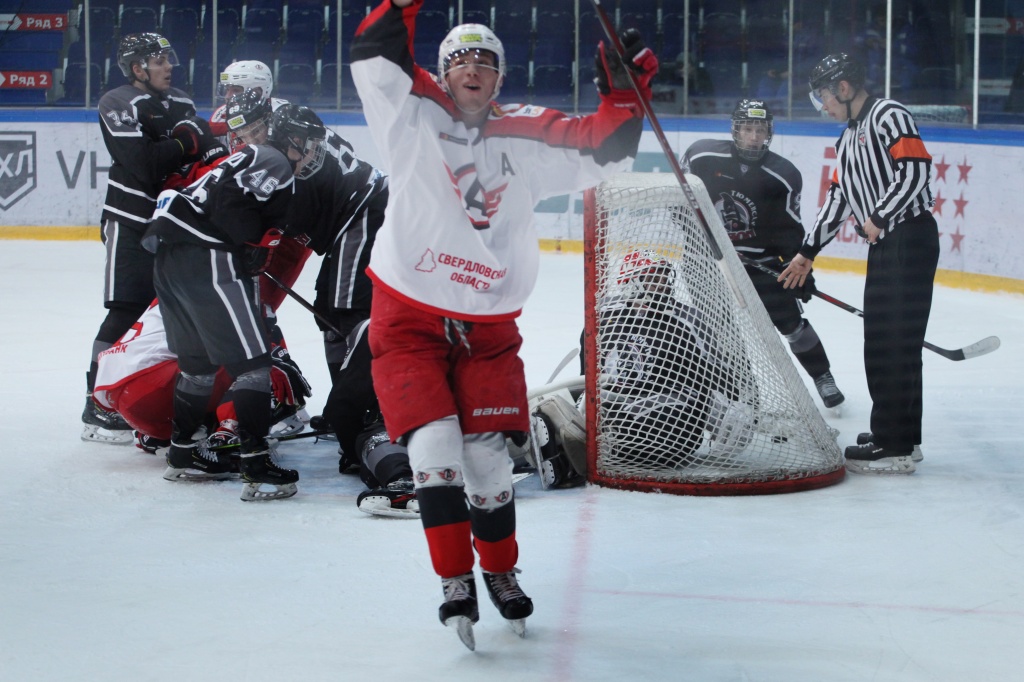 Avto Yekaterinburg visited Tyumen to face Tyumensky Legion. Ilya Zakharov opened scoring just two minutes in. 11 minutes later Legion responded with a marker by Denis Filatov, who deflected it home. Zakharov scored his second of the game in the following period and Vladislav Bukharov chipped in another one to improve the lead to two goals for last season’s silver medalists. Four minutes into the third stanza Zakharov completed his hat-trick and only after that did the home side get another goal – Artyom Pylayev shoved the puck into the net past Georgy Romanov.

Nevertheless, Avto had the last word in this one. Once again they got a goal from their top line – Ilya Loza set the final score. Vitaly Solovyov’s men win 5-2 on the road. 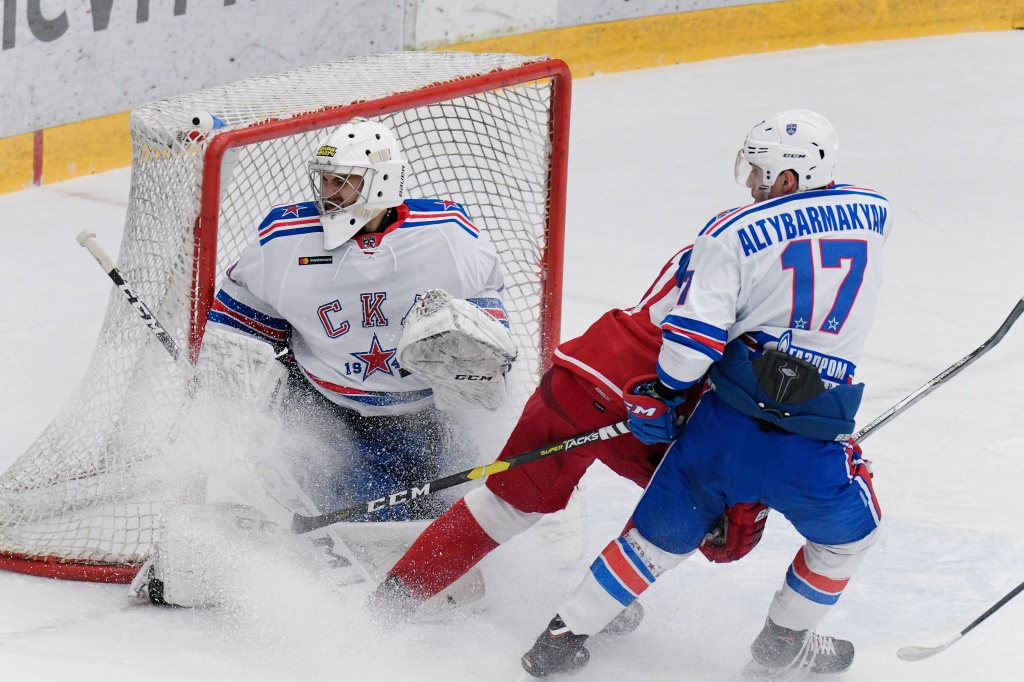 ‘Army men’ enjoyed a solid 4-1 win over Russkie Vityazi the day before. Second game of the back-to-back series ended with a blowout win for St. Petersburg. SKA-1946 scored as many as eight unanswered goals, while their netminder Dmitry Nikolayev stopped all 28 shots he had to face for another shutout.

The 46’s scored twice in the first and second periods – Ilya Rychkov found the back of the net once again, followed by Artyom Gradovich’s tally. Nikolai Polyakov scored twice, including a shorthanded tally.

Maxim Bets’ men collapsed in the final period stanza, allowing four goals. Dmity Semykin and Adel Galiullin got a marker each, while Ilya Altybarakyan set the final score as he scored twice as well. SKA-1946 further extend their winning streak and remain on top of Western Conference standings. Russkie Vityazi continue to balance at the bottom of playoff zone, occupying the 8th spot.

Krasnaya Armiya get even with Almaz 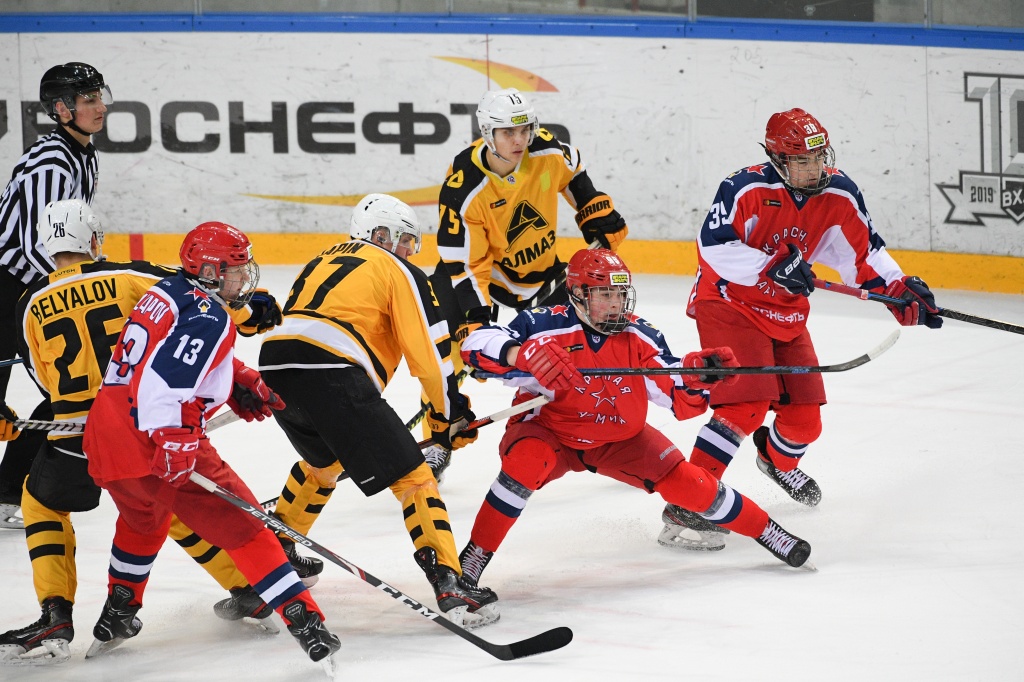 The day before ‘army men’ let the win slip away from them as they lost to Almaz Cherepovets in the shootout. Home team got off to a good start as they took three times as many shots as the opposition (16 against 6) and got on the board – midway through the frame Artyom Pugachyov solved Anton Vinogradov. Early in the second period Krasnaya Armiya Moscow improved their lead – Prokhor Poltapov scored just 90 seconds after the intermission and a few shifts later Ilya Chaban made it a 3-0 hockey game.

The visitors took just six shots in the second period but one of them got past Vsevolod Skotnikov – Cherepovets top-scorer Vladislav Fyodorov put Almaz on the board. However, that was the only goal the visitors would get. Pavel Koreshkov set the final score in the third stanza. Krasnaya Armiya get even with Almaz for the loss the day before and rise back to 3rd spot in Western Conference standings. 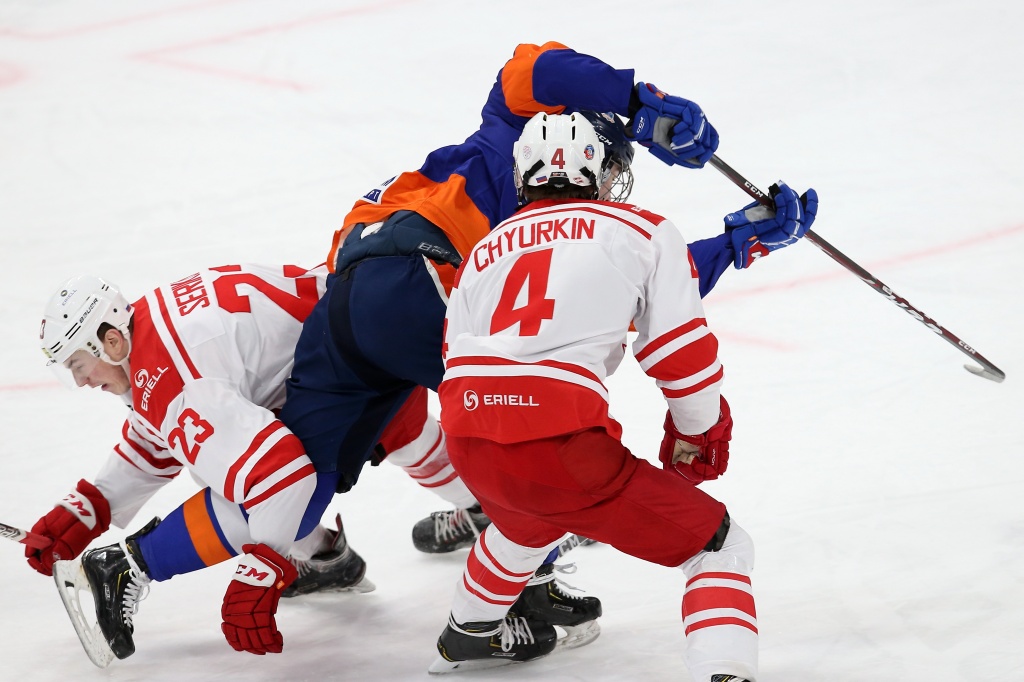 The red-and-white began the year with a loss in St. Petersburg to one of the Western Conference underdogs. Second game of the back-to-back series didn’t go well for Vladimir Tyurikov’s men either as they got no points. SKA-Varyagi repeated the final score of the first game as they got a 3-1 success.

The teams were evenly matched in the opening period of play. Both of them had one power play attempt but there was no scoring until late in the frame. With 40 seconds on the clock Alexander Katayev took a shot from a poor angle and hit the target – the puck deflected into the net off Pavel Kanayev’s pad. Allowing a late goal didn’t faze Spartak Moscow – the visitors were aggressive in the early minutes of the second period but couldn’t get anything past Kirill Obyskalov even with a man advantage. Yuri Dobryzhkin’s side did better on their power play attempt. Matvei Kabush received the puck from Matvei Gorbushin and sent it just under the bar.

Home team scored a quick goal in the third stanza. Konstantin Khremkin converted on an odd-man rush. Spartak challenged the play as a few seconds prior to Khremkin’s goal the red-and-white hit the bar. Game officials ruled a no goal on the other end of the ice and Khremkin rightfully registered the tally. The visitors did their best to get back in the game but Spartak managed to eke out just one goal – with ten minutes till the final buzzer Ruslan Novruzov found the back of the net.

Spartak lost 3-1 and didn’t get a single point out of the back-to-back series against one of the underdogs of the Western Conference. SKA-Varyagi St. Petersburg widen the gap between them and Amurskie Tigry Khabarovsk, solidifying their position at the 15th place. 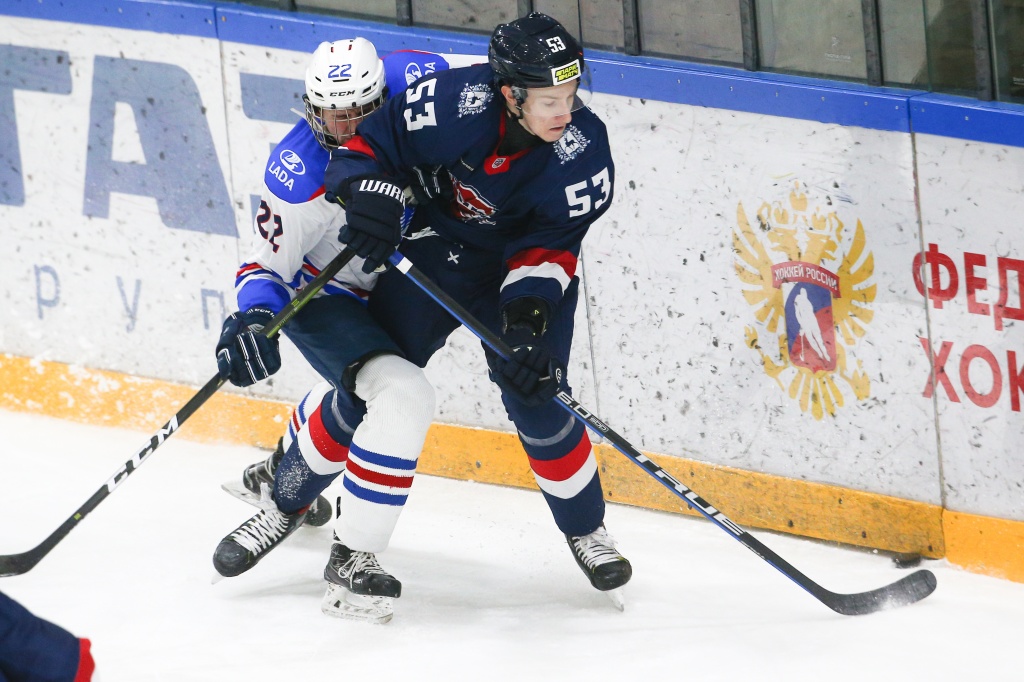 Ladiya Togliatti lost their second game of 2020, extending their slump to four games. While the day before Vladimir Malenkikh’s men managed to get two goals, in the second game of the back-to-back series Chayka Nizhny Novgorod netminder Yegor Gromovik stopped all 21 shots he had to face for a shutout.

Nizhny Novgorod scored thrice. Denis Morozov capitalized on a power play opportunity in the opening period of play, solving Artyom Zabrodin. Early in the second period Chayka doubled their lead. Three minutes after the intermission Alexei Smirnov found the back of the net and then Denis Davydov converted on yet another man advantage. The fans didn’t get to see goals after that. With this 3-0 decision Chayka rise to playoff zone, edging Sputnik Almetyevsk from the 8th spot in Eastern Conference standings. 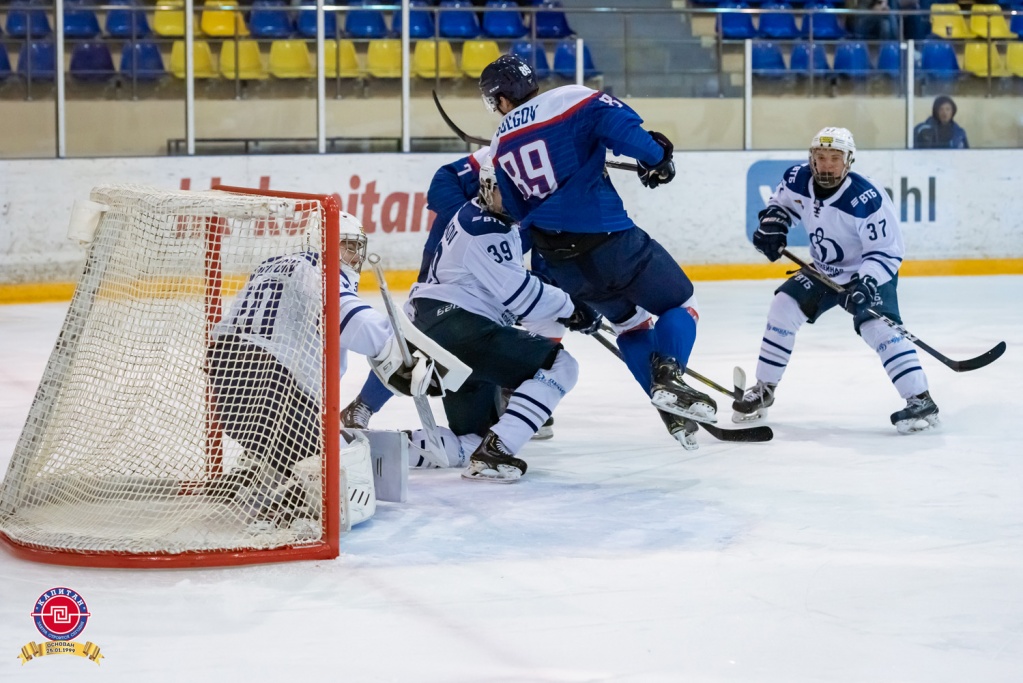 The teams exchanged goals in the opening period of action. Five minutes in Mikhail Kulakovsky put the blue-and-white in the lead. Shortly before the intermission Daniil Tyutchev tied it up, scoring Kapitan’s first goal in the back-to-back series.

Second frame began with a quick goal by Dynamo – Yegor Alanov scored his first career Junior Hockey League goal. With five minutes until the second intermission Bogdan Trineyev doubled the lead for the visitors as he sieved one through Artemy Pleshkov. Ivan Didkovsky set the final score with two minutes remaining on the clock in regulation. With this 4-1 success Dynamo rise to 7th spot in Western Conference standings. Kapitan remain 13th.