11 regular season games took place in Parimatch Junior Hockey League on January 4th. We take a look at them in this review. 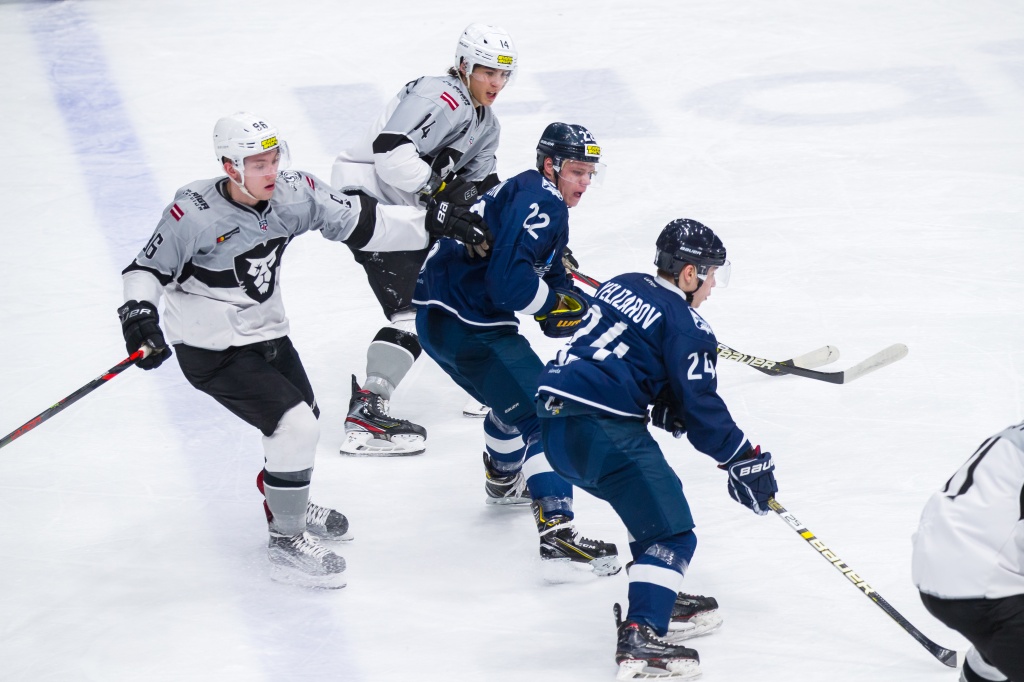 The teams opted for fast-paced hockey right out of the gate but first goal of the game came only midway through the opening period. Home side grabbed the lead 11 minutes in as Ivan Lapshin found the back of the net. Taifun Primorie Region almost gave up a goal right after that as they got a penalty but HK Riga failed to convert on it. Despite all effort by the visitors to get back even, home side had a 1-0 lead after 20 minutes of play.

However, Latvian side got the parity early in the second frame. Having killed off a penalty, Denis Fjodorovs got one past Dmitry Sharov 30 seconds later. Taifun picked up the pace after that. They began spending a lot of time in the offensive zone and create scoring chances. They went on to get their lead back late in the period – Alexander Trapeznikov got the tally.

Riga threw everything they had at Taifun in the third period, looking for the equalizer. They managed to make the opposition play their brand of hockey but Primorie Region protected the lead well. In the end, despite having two power play opportunities, the visitors couldn’t get the second goal, while home side got another tally – Dmitry Kozlov hit the empty cage with 20 seconds on the clock to put it away. Taifun win 3-1. 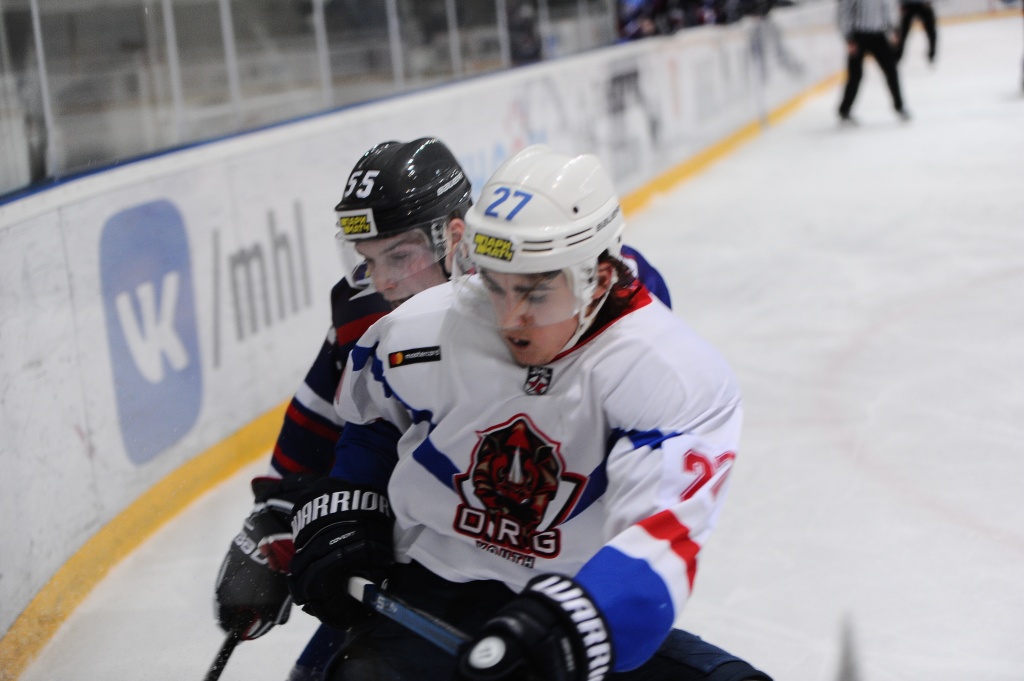 Home team had the momentum on their side in the opening period. Yuzhno-Sakhalinsk spent most of the frame in the offensive zone and kept creating work for Rostislav Zinovenko. However, the ‘Rhinos’ were able to fend off ‘Sharks’. Home team couldn’t capitalize on their scoring chances neither on a power play, nor at even strength. After 20 minutes of play there was no scoring in the game.

ORG Junior leveled out the game in the second period. The teams were making one mistake after another, perpetually exchanging man advantages. Nevertheless, neither Chinese side, nor Sakhalinskie Akuly couldn’t convert on their chances. Second period of play also didn’t feature any goals, despite an abundance of scoring opportunities for either side.

The deadlock was finally broken early in the third period. Alexei Bozunov scored a shorthanded goal. However, Yuzhno-Sakhalinsk got a penalty right after that and Prokhor Korbit tied it up for the visitors. Consequently, the ‘Sharks’ grabbed the momentum and created several scoring chances but ORG were able to fend the opponents off for a little while. Sakhalinskie Akuly did get the late game-winner – Daniil Glukharev found his target. With his goal home team edged ORG Junior by a narrow margin – 2-1. 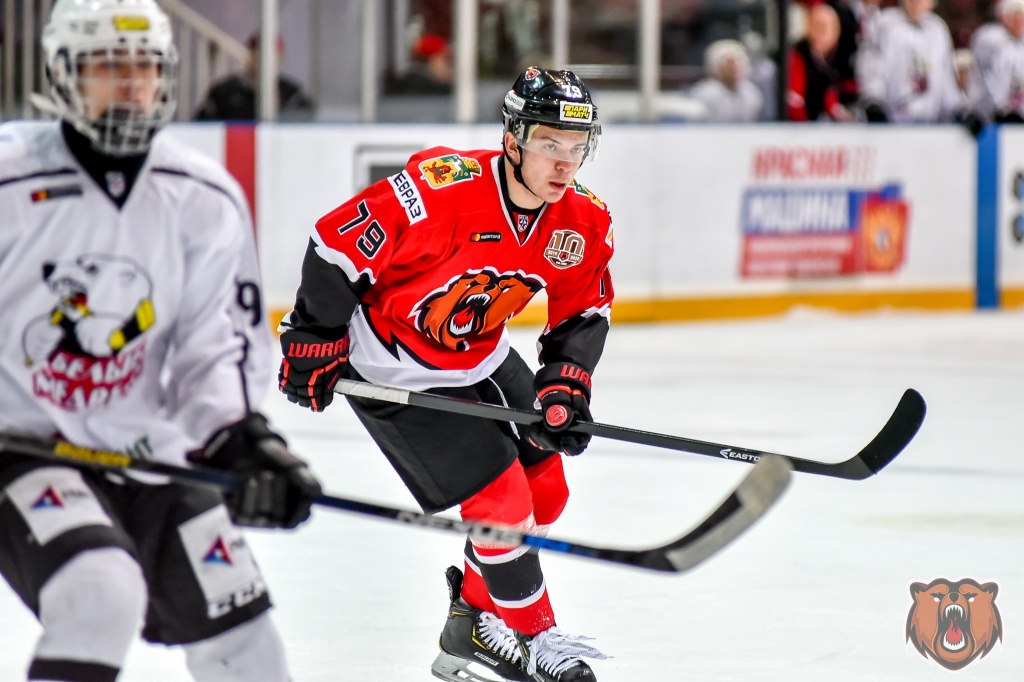 In the second Bear Rivalry game of 2020 home team got a rather early lead – Artyom Morozov put his team in front. Kuznetskie Medvedi continued to create scoring chances and midway through the period Nikita Selivanov sniped one between the wickets of Chelyabinsk goaltender to double the lead for Novokuznetsk. The visitors had the momentum on their side until the intermission and did their best to even it up but couldn’t convert on their chances.

Early in the second frame Belye Medvedi got a power play opportunity and Alexander Abramov got a goal back. The visitors stayed aggressive in hopes of finding the equalizer and midway through the frame Danil Zinovyev tied it up for Chelyabinsk with a shot off a spinorama. The teams headed to the dressing-rooms tied 2-2 after 40 minutes of play.

Late in the second frame Bulat Zagidulin got a game misconduct and the visitors established a lead early in the third stanza – Alexander Abramov scored his second of the game on a power play. Home side did everything they could to level it again but Chelyabinsk had a firm grip on the game and didn’t let the win slip away from them. Kuznetskie Medvedi tried to salvage the game, pulling their netminder for the extra attacker but the visitors protected their lead. Belye Medvedi win 3-2 on the road. 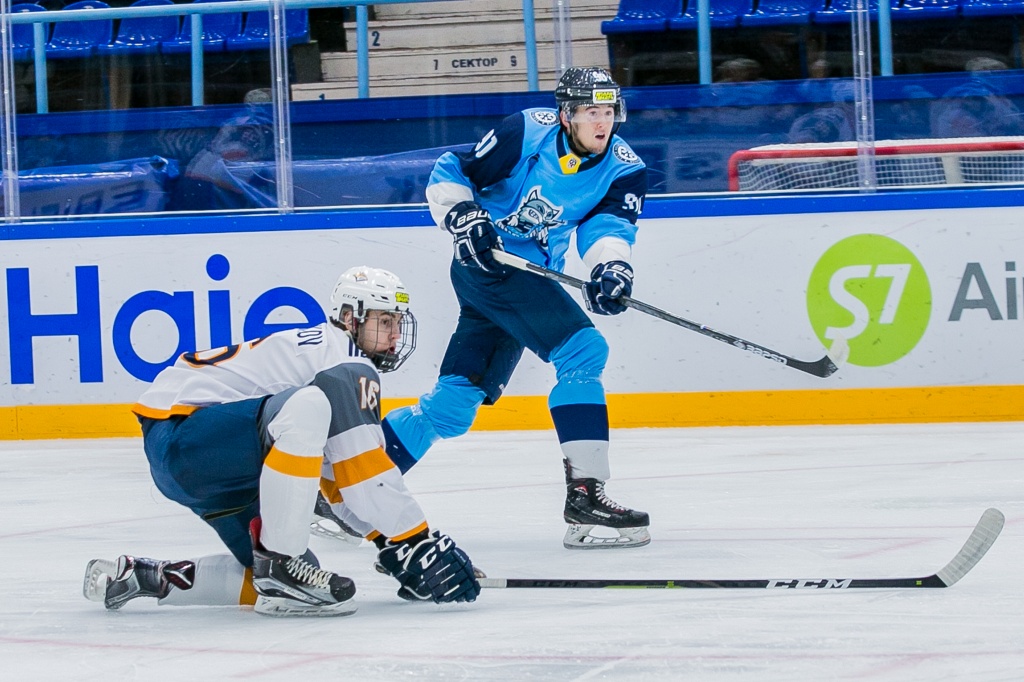 Home team scored the first goal of the game. Nine minutes in Nikita Potapov put Sibirskie Snaipery in the lead. The game evened out after that. Stalnye Lisy Magnitogorsk created two good scoring chances midway through the period but Vladislav Shcherbakov turned one of them aside and then he was saved by his best friend – goal-post. Late in the period home team also created two good scoring chances but couldn’t capitalize on them either.

Sibirskie Snaipery kept buzzing around the offensive zone after the intermission but Stalnye Lisy were bailed out time and again by their netminder and irons. ‘Snipers’ could have scored twice but the puck rattled off the pipe on both occasions. Nevertheless, home team managed to convert that constant pressure into goals – Mikhail Romayev doubled the lead for Novosibirsk closer towards the second intermission. Magnitogorsk got a man-advantage after that but couldn’t convert on it and Sibirskie Snaipery headed to the dressing-room with a 2-0 lead after 40 minutes of play.

Stalnye Lisy grabbed the momentum early in the third stanza and managed to get a goal back – Danil Pyatin sniped one home. The visitors continued to dominate and constantly generated scoring chances. However, Sibirskie Snaipery got a goal off one of their counter-attacks – Georgy Yurov got the marker. Magnitogorsk rolled the dice late in regulation and pulled their goaltender for the extra-attacker but the very same Yurov got a brace, scoring on the empty net. Novosibirsk went on to enjoy a 4-1 win.

Mamonty Yugry get even with Reaktor 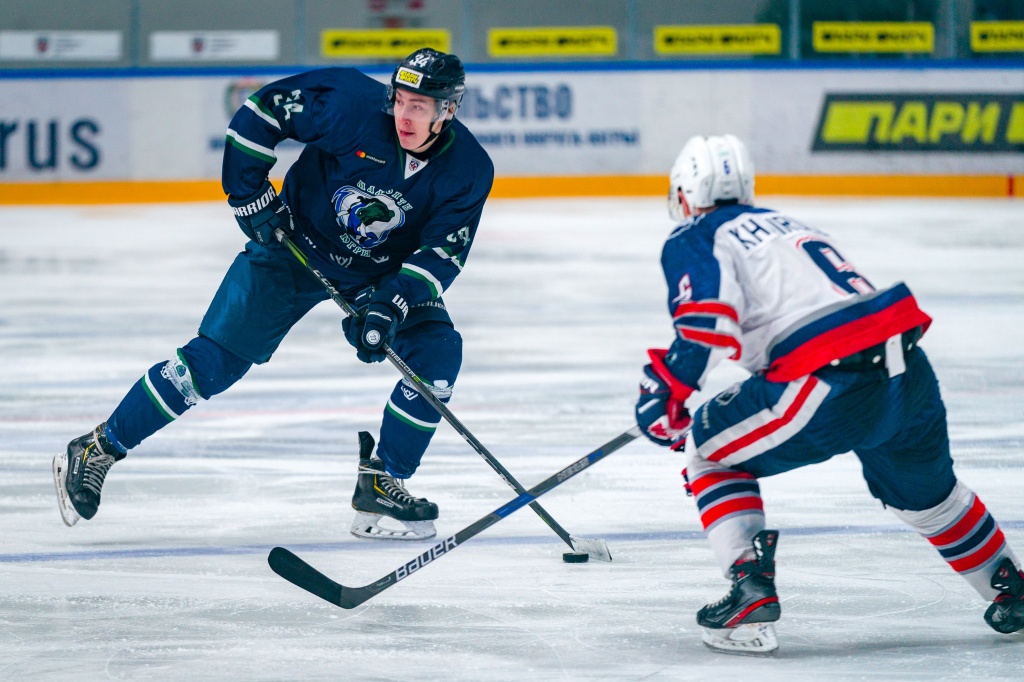 Khanty-Mansiysk grabbed the momentum right from the get-go and put a lot of work on the plate of Yaroslav Ozolin. The visitors coped with the pressure in the early minutes but Ivan Vorobyov still put Mamonty Yugry in the lead midway through the period. Home team stayed aggressive offensively after the goal with with three and a half minutes until the intermission Damir Shirgaziyev doubled the lead for the ‘Mammoths’.

After the intermission the visitors tried to turn things around. They managed to even it out and create a few good scoring chances. Konstantin Kuzmaul made several huge saves but Yegor Toropov still got one past him. However, home team got the momentum on their side once again after that and began spending a lot of time in Reaktor’s end. Nizhnekamsk fended off the rushes till late in the period but then Khanty-Mansiysk scored three goals in a span of 90 seconds – Ivan Savchik, Nikita Chusovitin and Ivan Ezhov got the tallies. ‘Mammoths’ had a 5-1 lead coming into the third period.

Khanty-Mansiysk dominate in the third period as well, not giving the opposition any hope of coming back into the game. Nizhnekamsk couldn’t turn it around and Mamonty Yugry enjoyed a solid win.

Russkie Vityazi lose to the top team of the West 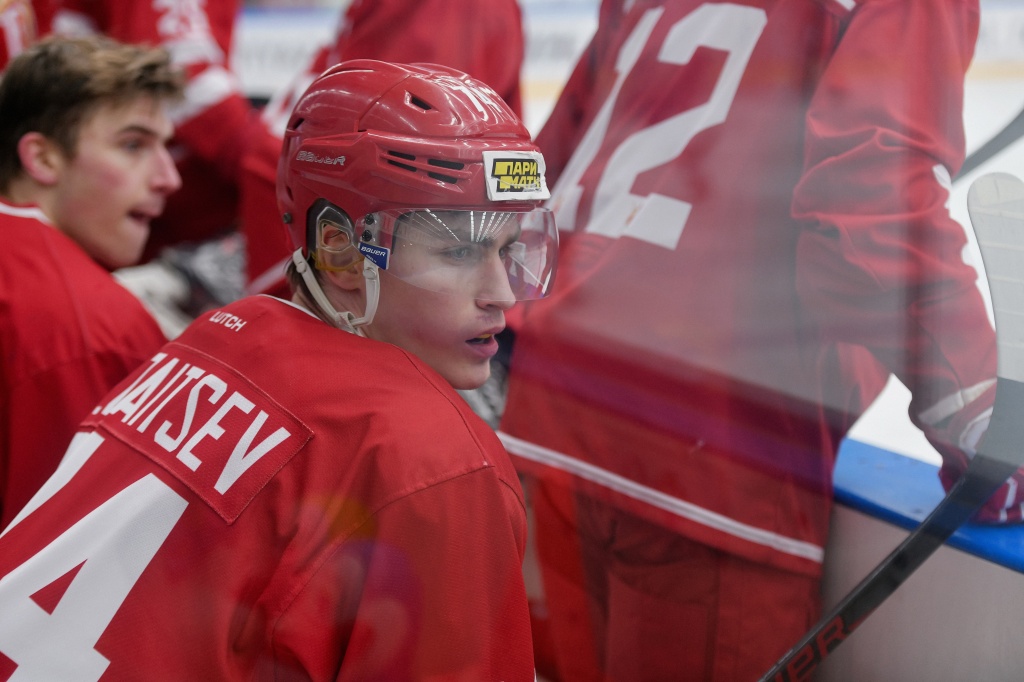 SKA-1946 St. Petersburg, who currently top the Western Conference, visited Chekhov, Moscow Region and beat Russkie Vityazi. ‘Army men’ laid out the foundation of the win as early as in the opening period as Alexander Gordin was on fire. He put SKA-1946 on the board four minutes in and converted on Nikolai Smirnov’s penalty a little later. Smirnov made up for that mistake midway through the frame as he got one past Dmitry Nikolayev. However, that was the only goal Russkie Vityzi could score in this one.

Late in the second frame Gordin completed his hat-trick with yet another goal on a man-advantage. Nikita Vashchenko set the final score. The fans didn’t get to see any goals in the third stanza. ‘Army men’ played smart defensively and didn’t let the opposition get any closer on the scoreboard. 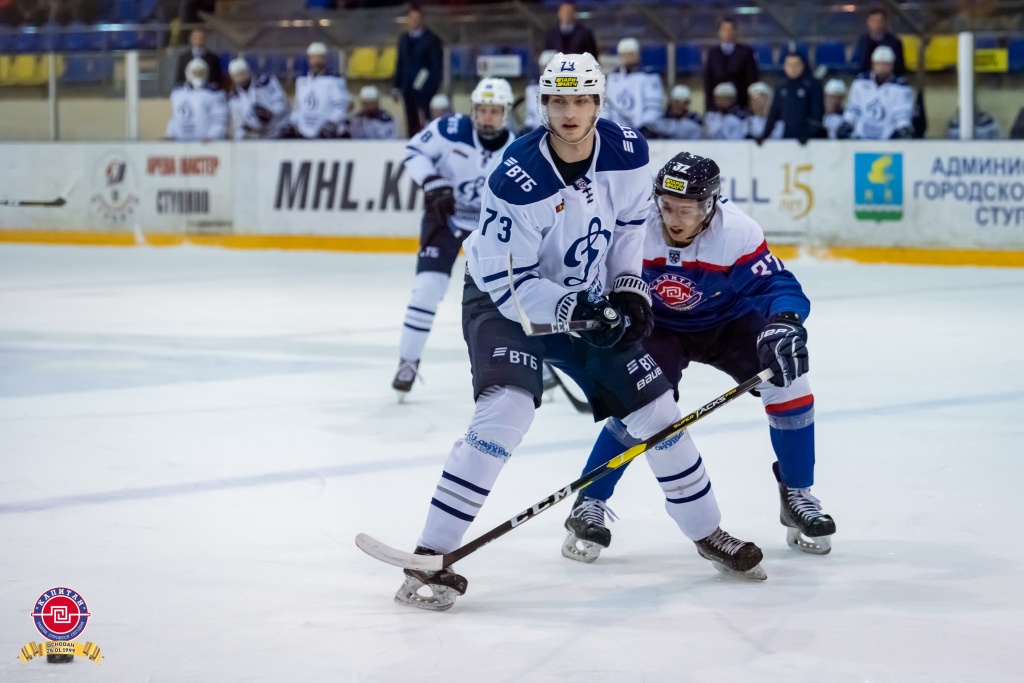 Another Moscow Region team – HC Kapitan Stupino – also played at home and lost just as well. JHC Dynamo Moscow walked away victorious. After a scoreless first period of play, in which the visitors had the momentum and outshot the opposition, the blue-and-white opened up the scoring only late in the second period. Yaroslav Lyuznekov’s men got on the board with a goal by Dmitry Zlodeyev – 1-0 after 40 minutes of play.

Kapitan took just four shots on Maxim Motorygin in the third stanza and allowed an empty-netter late in regulation – Bogdan Trineyev got the tally. Dynamo win 2-0 as Motorygin posts a shutout with 19 saves. 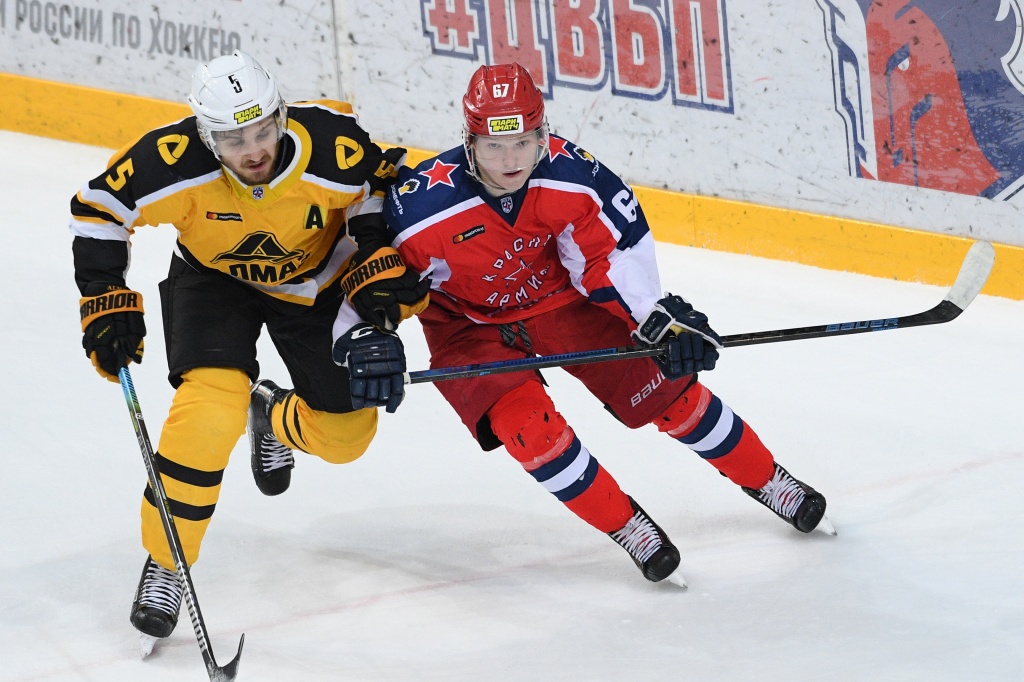 A hard-fought game took place in Moscow as Krasnaya Armiya played hosts to Almaz Cherepovets. Games between the two usually are playoff-like and this instance was no exception. Key events of the game transpired in the first period as the teams exchanged goals. ‘Army men’ got in the lead 14 minutes in as Vladislav Korobkin found the back of the net. Maxim Nevolin brought it back to square one with just eight seconds remaining to play in the period.

There was no scoring after that. Early in the third stanza home team got a penalty shot called against them but Yegor Chizhikov failed to convert on it. Krasnaya Armiya got a bench minor for too many men late in regulation. Pavel Koreshkov’s penalty in overtime wasn’t fatal but Chizhikov got what he was looking for at even strength, nevertheless. Cherepovets take it 2-1 in overtime.

JHC Spartak Moscow suffered a rather unexpected loss at SC Hokkeyny Gorod where they faced SKA-Varyagi St. Petersburg. Home team came into this one riding a 12-game losing streak but managed to snap the gruesome series beating the red-and-white. Stepan Anisimov and SKA-Varyagi top-scorer Nikita Shuidun got the markers. The latter scored on a power play.

Spartak responded with a snipe by Vladislav Leshchenko and that goal proved to be the only one for Moscow in the game. Home team protected their narrow lead up till late in regulation. After Dmitry Kulikov was yanked for the extra-attacker, Alexander Pustovalov hit the empty cage to set the final score. SKA-Varyagi enjoy a win in a long time as they take it 3-1 on home ice. 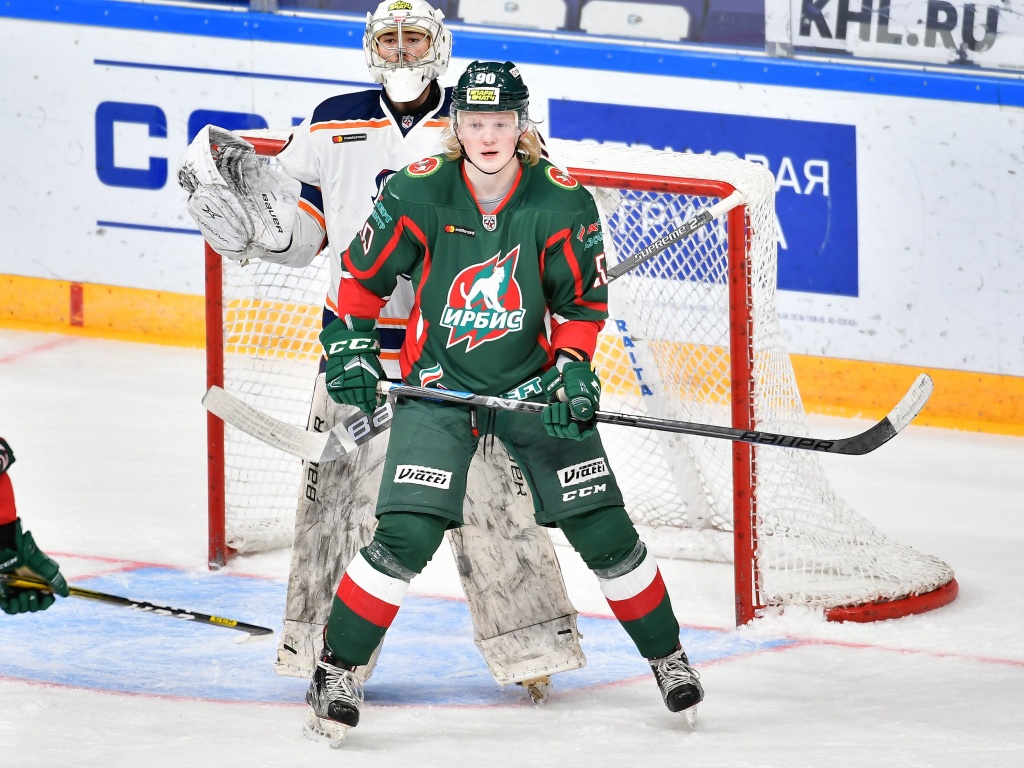 The gameday came to an end with two games in the Eastern Conference. First of them was held in Kazan where Irbis struggled and yet beat Sarmaty Orenburg. The teams exchanged goals in the opening period. Adel Bulatov put his team in the lead 10 minutes in but Orenburg responded rather quickly with a marker by Nikolai Petrov.

The game stayed level until midway through the second frame when Kazan grabbed the lead again. Kirill Mukhin scored the essential game-winner. The visitors outshot the opposition in the third stanza and got a power play opportunity in the last minute but Kazan pulled through and enjoyed a 2-1 win on home ice. 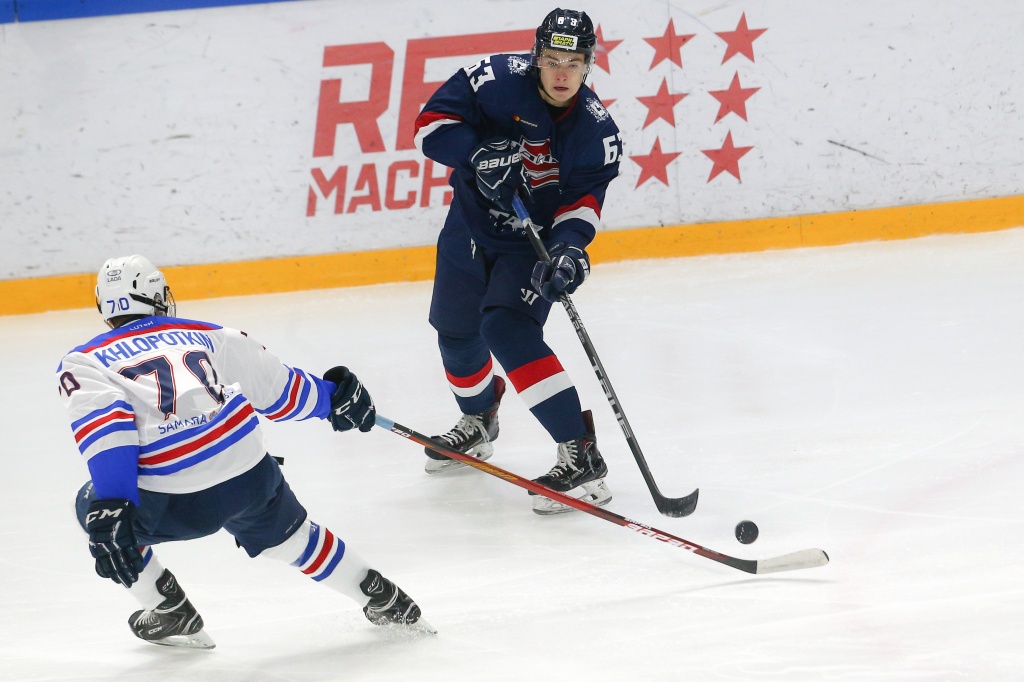 Final game of the day was held in Nizhny Novgorod where Chayka played hosts to Ladiya Togliatti. Home side managed to pull off a win against the visitors, who have hit a bit of a slump lately. Togliatti opened up the scoring as Stepan Steshenko found the back of the net. However, not only did Nizhny Novgorod tie it up before the intermission, they also got in the lead – Nikita Shavin and Denis Nikulin found the back of the net. Early in the second frame Denis Morozov converted on a penalty shot to give Chayka a 3-1 lead.

Steshenko scored his second of the game in the last minute of the period, pulling Ladiya back to within one. Nevertheless, that was as close as the visitors could get. Andrei Panchuk sealed the deal with an empty-netter. Chayka win 4-2 on home ice.