Final Parimatch Junior Hockey League gameday in 2019 took place on December 29th. 20 teams hit the ice, 16 of which were Western Conference representatives. We take a look at Sunday action in this review. 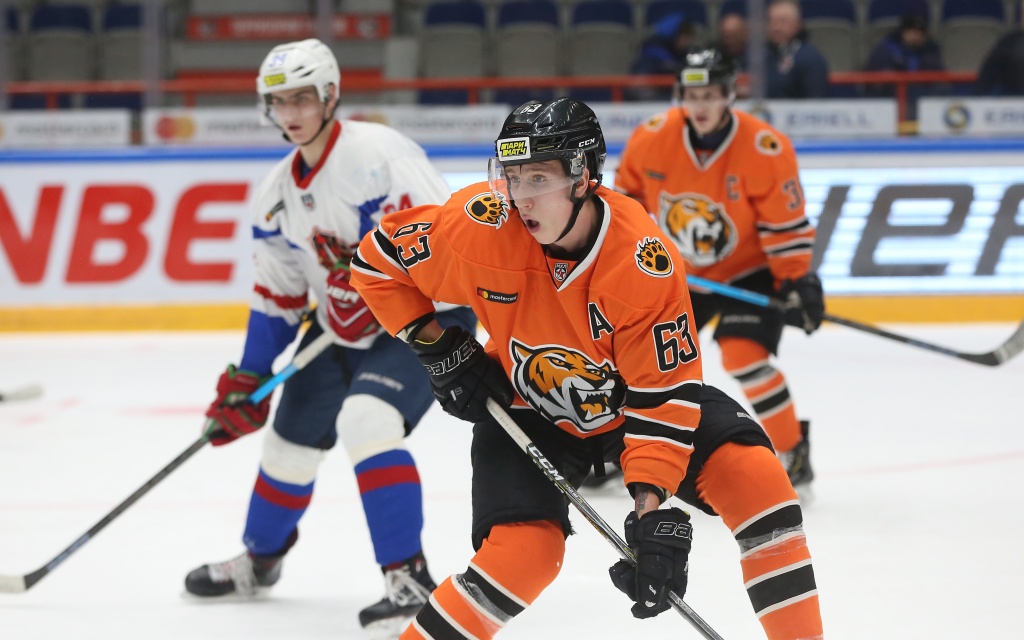 Final game of 2019 began in Khabarovsk where Amurskie Tigry played hosts to ORJG Junior Beijing. After losing in the first game of the back-to-back series Evgeny Esaulov adjusted his roster. For instance, rookie Rostislav Zinovenko was delegated between the pipes. Surprisingly the visitors had the momentum on their side in the first period of action, taking twice as many shots as the opposition (9 against 4). Despite that, Khabarovsk had two power play attempts. ORG Junior opened up the scoring nine minutes - Yuyang Hou scored his first career Junior Hockey League goal. Home team managed to get back even before the first intermission – with four seconds on the clock Sergei Ivanov solved Zinovenko.

Beijing collapsed in the second period, allowing as many as three goals. First Amurskie Tigry top-scorer Nikita Linnik capitalized on a power play and then Danil Fyodorov and Ilya Kozhukhov got a tally each in a span of 68 seconds. ORG Junior did their best to get back in the game but neither swapping goaltenders, nor mass brawl after allowing a goal helped them improve their situation. Amurskie Tigry dominated in the third stanza and ended up winning the game by a blowout. Ignat Korotkikh set the final score.

With this 5-1 victory Amurskie Tigry wrap up the year with a 3-game winning streak and get close to SKA-Varyagi in Western Conference standings. ORG Junior failed to get any points in 2019 and tied the worst all-time record set by Dinamo-Raubichi in consecutive losses in Junior Hockey League, having lost their 42nd game in a row. 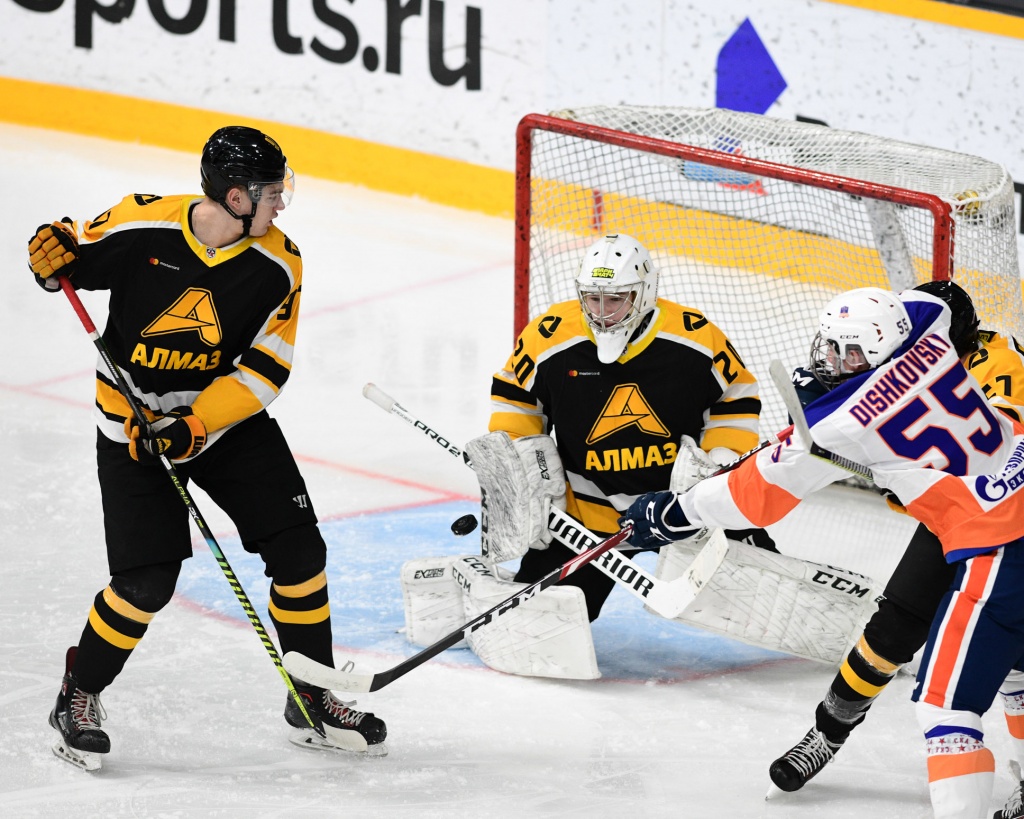 St. Petersburg were more aggressive in the first period. SKA-Varyagi had three power play opportunities, taking twice as many shots as Almaz Cherepovets (13 against 6) and yet couldn’t get anything past Anton Vinogradov, who had replaced Denis Rybalkin between the pipes for the game.

Home team managed to level out the game in the second period. Evgeny Stavrovsky, who was selected as Coach Of The Year last week, saw his men score twice. Five minutes into the frame Artyom Oschepkov broke the deadlock and ten minutes later Vladislav Kuznetsov doubled the lead. Defenseman Deni Elabiyev made his debut for Cherepovets but he couldn’t get any points in his first career Junior Hockey League game.

The visitors began the third frame with a goal but 17-year-old Stepan Borsiov’s marker was the last in the game. Yuri Dobryshkin’s side lose their final game of the calendar year and go into the holidays as the 15th team of the West, while Almaz feel comfortable at the third place. 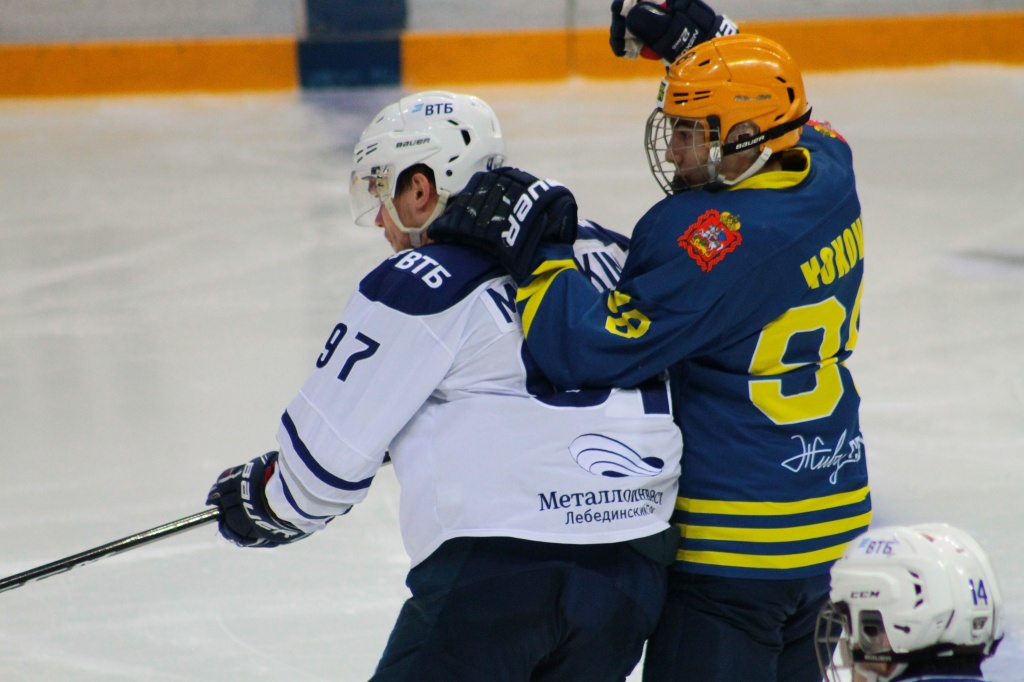 The visitors had the lead thrice in the game. The fans got to the see first goal only early in the second period of play – Dmitry Zlodeyev capitalized on a power play, which Dynamo got right after the puckdrop. Five minutes later Atlant Moscow Region found themselves down a man once again but this time around it was Maxim Motorygin who got scored on. Mytsichi captain Dmitry Silantyev scored a shorthanded goal for his second in as many games.

The blue-and-white once again got in the lead midway through the period but couldn’t hold on to it. Mikhail Bolshakov, who had an assist on Bogdan Trineyev’s marker, got a penalty and Atlant quickly converted on it. Home team’s special team scored just 11 seconds in – Yegor Starkov tied it up on the scoreboard.

The teams exchanged power play opportunities once again but failed to capitalize on either of them. It seemed that the game would go to overtime but with 90 seconds on the clock Trineyev scored his second to give the visitors their third lead of the night. Home team couldn’t find the equalizer in the remaining time. To make things worse Yegor Starkov left Atlant shorthanded.

JHC Dynamo Moscow win four consecutive games and finish 2019 just two points away from the playoff zone, having as many games in hand. 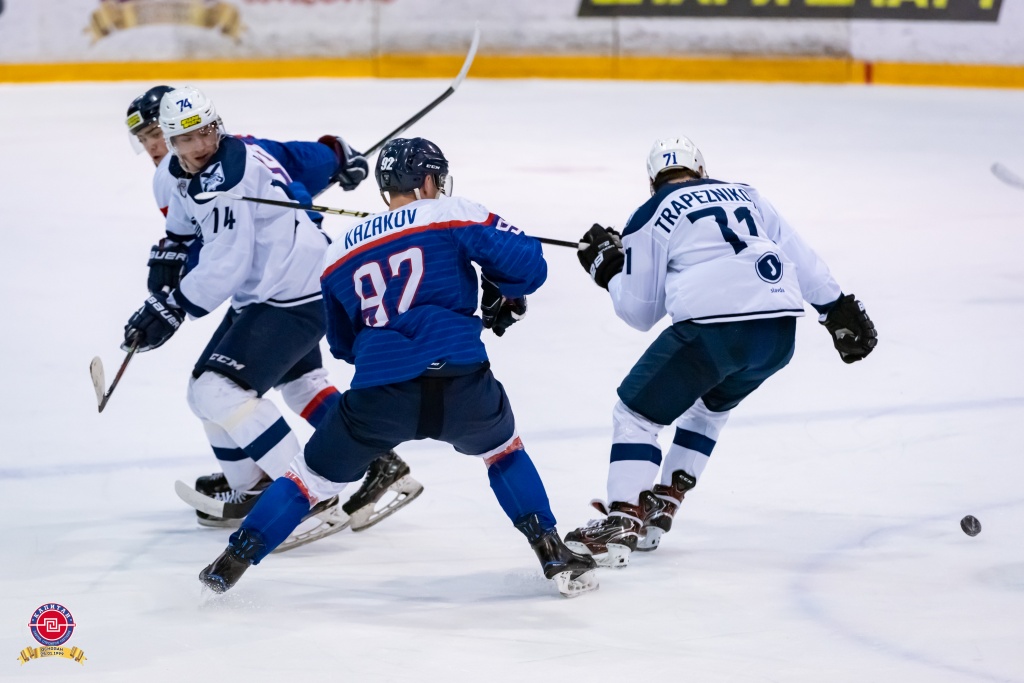 While Taifun Primorie Region allowed three goals the day before, they played with much more caution in the second game in Stupino. Dmitry Sharov replaced Yegor Sinegubkin between the pipes for the visitors and stopped all 22 shots he had to face to get his first shutout with Taifun.

The visitors established a comfortable lead in the opening period of play. Danila Barbash hit the twine 11 minutes in and then Artyom Tereshchenko doubled the lead for Taifun. Early in the second period Leonid Pasmanik sent another one past Artemy Pleshkov to set the final score. 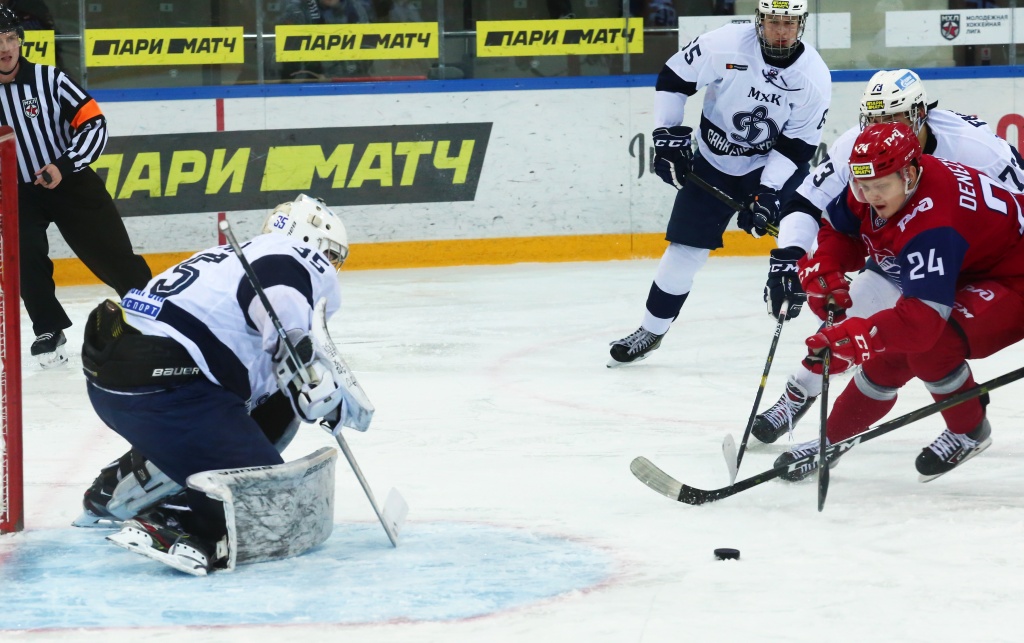 Loko Yaroslavl faced JHC Dynamo St. Petersburg in the second game of the back-to-back series. The day before Dynamo edged reigning Kharlamov Cup champions in the shootout. Once again there was no scoring in the opening period of play, while the visitors did better in the second. Five minutes into the period Anton Lukichyov made a defensive mistake, Pyotr Yakovlev got the puck and sent it past Vladislav Okoryak. Dynamo improved the lead to 2-0 midway through the stanza – Sergei Bolshakov backhanded it home.

Despite all effort put forward by the ‘railway men’, they couldn’t catch up. Late in regulation Vladislav Rybakov got an unnecessary penalty, robbing Yaroslavl of the option for going for one final push. Makar Chufarov was the first star of the game as he stopped all 32 shots he had to face for a shutout. JHC Dynamo St. Petersburg beat reigning champions again – this time 2-0. 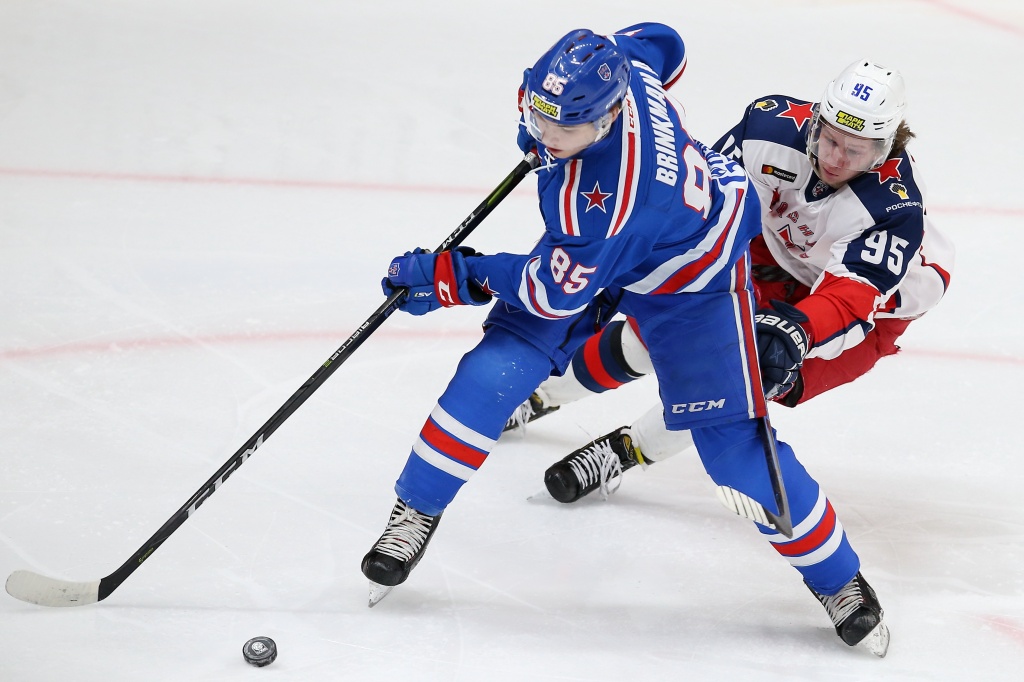 Second game of the back-to-back series between rivals SKA-1946 and Krasnaya Armiya Moscow took place in St. Petersburg. The visitors had a slight advantage in the opening stanza and took more shots on Dmitry Nikolayev. The biggest chance came on a 3-on-1 rush but Takhir Mingachyov’s pass got picked off. The teams exchanged power play opportunities in the second period. SKA-1946 could get on the board with a shot by Ivan Manin but the puck ringed off the pipe behind Vsevolod Skotnikov and went back into play.

Key moment of the game came late in the third period. Arseny Brinkman finally solved Moscow netminder in the final two minutes of regulation. He circled the net and scored on the wraparound. The visitors called timeout and pulled Skotnikov for the extra-attacker but that led only to an empty-netter – Alexei Tsyplakov bagged it for SKA-1946. Nikolayev finished the game with 28 saves.

Krylia Sovetov get even with HK Riga 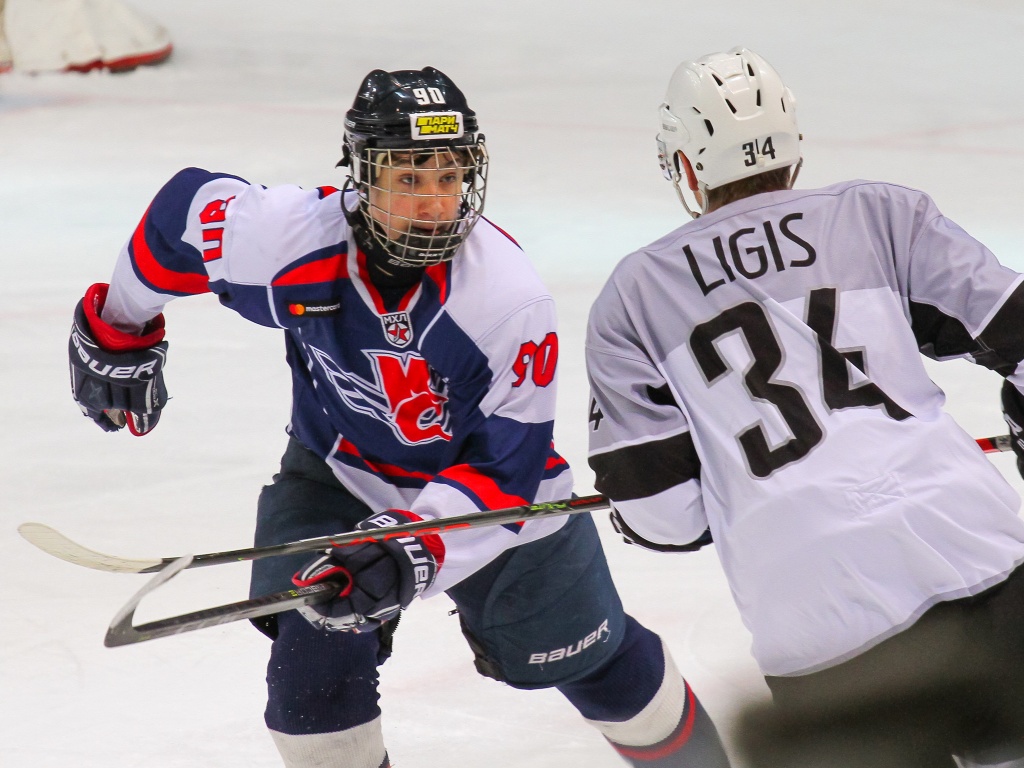 Krylia Sovetov Moscow faced HK Riga once again in Setun. This time around it was the visitors who opened scoring – seven minutes into the game Janis Svanenbergs beat Danila Kadochnikov. Riga ran into a penalty problem in the second period and ‘Soviet Wings’ used it to their advantage. Daniil Ivanov got a power play tally and in the very next shift Ildar Kashafetdinov put Moscow in the lead. The visitors responded with Svanenbergs’ second tally of the game to make it 2-2 after 40 minutes of play.

Moscow ensured the win in the final stanza. Three minutes into it Sergei Odinokov put his team back in the lead. Rodion Poroshin set the final score with an empty-netter after Janis Voris had been pulled for the extra-attacker. Krylia Sovetov take it 4-2 and finish the year with a win. 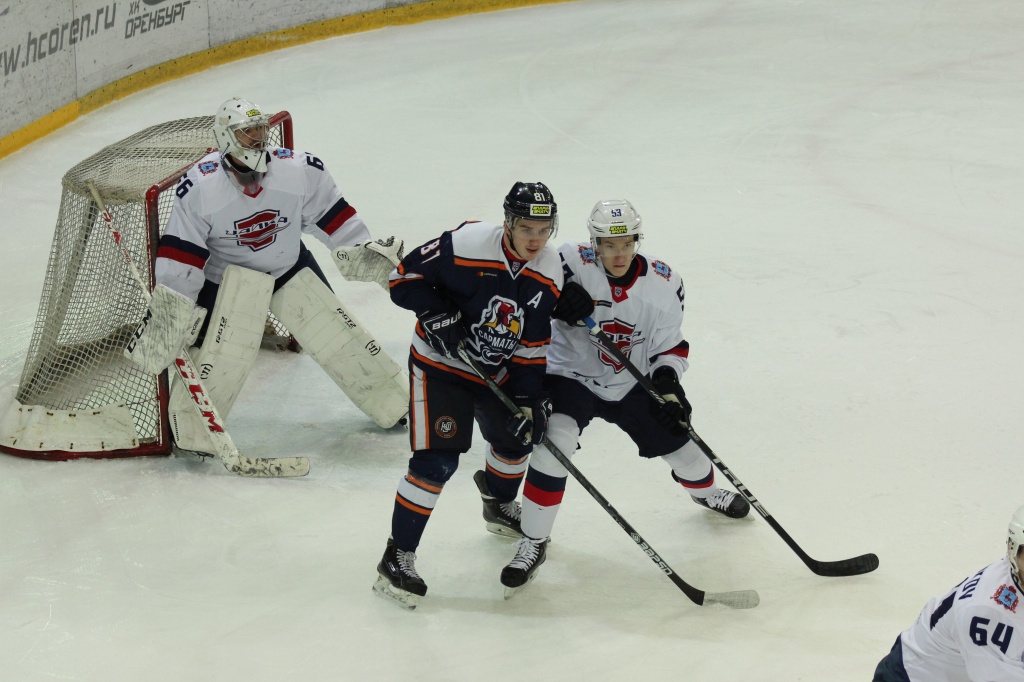 Sarmaty faced off against Chayka Nizhny Novgorod in Orenburg after a loss the day before. Orenburg didn’t do well this time around either. Ilya Badanin and Andrei Panchuk scored two unanswered goals past Anton Borodkin in the opening period of play. It took Nizhny Novgorod just a few seconds in the third period to double their lead. Badanin scored his second of the game, while Yegor Alexeyev also added a tally.

Alexander Gilyov replaced Anton Borodkin in Sarmaty goal after that and Ivan Nazarov got a tally back. However, Denis Morozov restored the 4-goal cushion before the intermission. The visitors got in the rhythm in the third period and went on to score twice more. Danil Roganov converted on a power play, while Kirill Galkin got another goal for Sarmaty. Chayka enjoy a blowout 6-2 win on the road.

Irbis beat Ladiya in the last game of the year 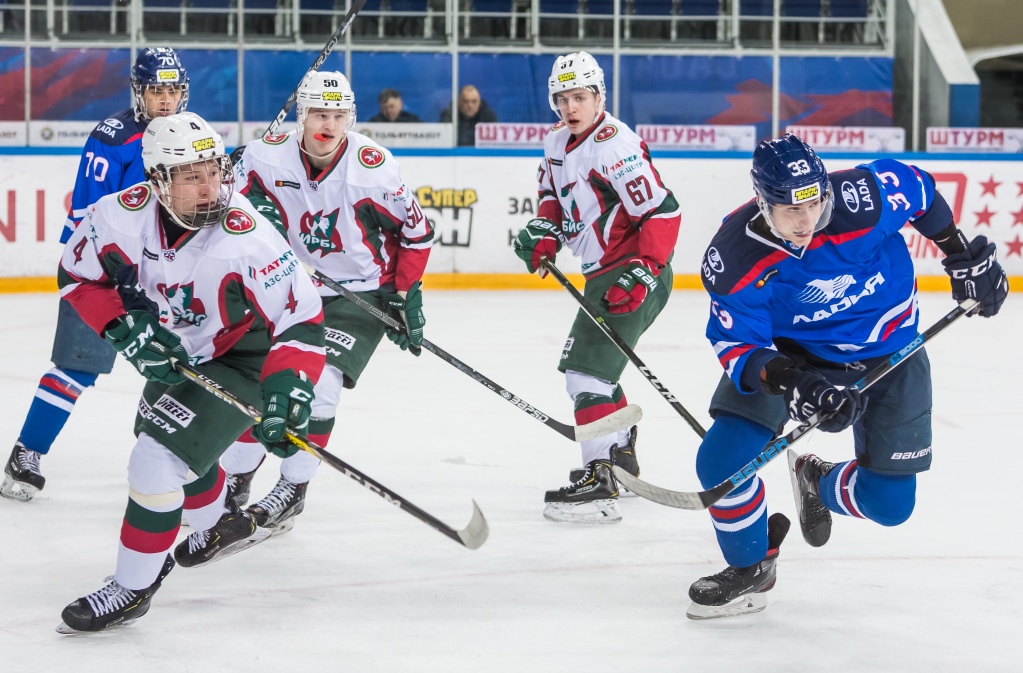 In the final game of the year Irbis Kazan visited Togliatti to face Ladiya. Togliatti killed off two penalties in the opening period of play and allowed a goal at even strength. Emil Galiaskarov found his target. Kazan improved their lead midway through the frame – Ruslan Galimzyanov sniped one top-shelf just over the glove of Igor Kulakov. Only after Ilnur Shabanov made it a 3-0 hockey game did home side respond with a tally by Pavel Simonov.

Nothing changed on the scoreboard after that. Kazan held a firm hand on the game and didn’t let the opposition get more than one goal. Late in regulation Artyom Yakutov gave in to his emotions and got a game misconduct for checking to the head. Kazan worked the clock and finished the year on a bright note. 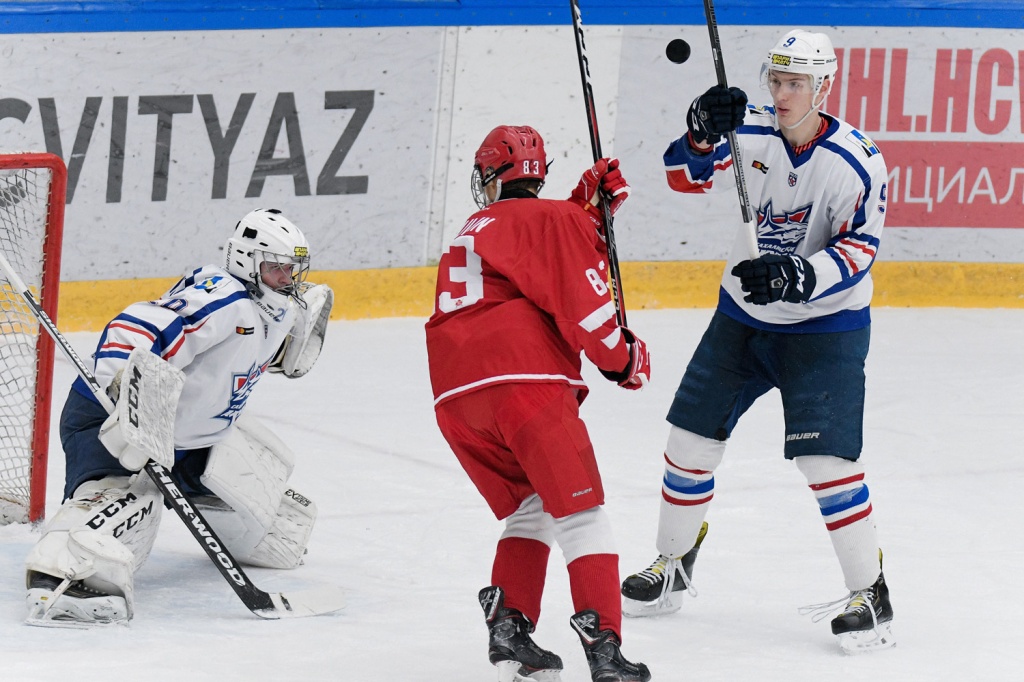 Despite the fact that several Russkie Vityazi players were missing the game due to cold, home team dominated throughout the game. Sakhalinskie Akuly opened up the scoring four minutes in, converting on their initial power play opportunity of the game. However, Nikita Goncharov brought it back to even with a tally on a 2-man advantage.

Second frame featured two fights – both between Russkie Vityazi’s Vladislav Sarayev and Sakhalinskie Akuly’s Alexander Baranov. Officials handed out 72 penalty minutes by the end of the period as the teams remained tied up on the scoreboard.

Third period began with another fight, which did well for the home side. 17-year-old Stepan Urulin scored his first career Junior Hockey League hat-trick in a span of just 8 minutes and 5 seconds to bag it for Russkie Vityazi. With 90 seconds on the clock Yuzhno-Sakhalinsk converted on another power play but it didn’t change much in the big picture.