Sputnik
News
“I am of the same “slow ship” style as my father.” Maxim Mayorov – about moving to Yaroslavl, national team debut and passion for tennis
“I bought a cake and gave flowers to my mom with my first paycheck.” Yaroslav Tsulygin – about his JHL debut with Tolpar
Was signed up for hockey at the age of three, was dressed as a goalie in an extreme situation and looks up to Datsyuk: take a closer look at the leader of Irbis and the hope of Ak Bars
Edgar Varagyan: “When we were on the plane, guys told me: “He is an enforcer, he would beat you up with no sweat.” I thought: things happen, he would beat me up and so what?”
“As time goes by, taking a flight to Sakhalin feels almost like being stuck in Moscow traffic.” Daniil Veremeichik – the JHL's Best Player on Social Media
“Working out in a gym is a type of rest for me.” Ivan Murashov had the best season of his career, dreams of playing in the KHL and has not eaten any fast food for two years
“Condensed milk is the only unhealthy food available for the national team.” Raul Yakupov – about the Black Sea Cup, the KHL debut and the season with Reaktor
“Four years in the JHL was a great time. Winning the Cup with Dynamo was the best moment.” Ivan Didkovsky about junior phase of his career
Share

Nine regular season games took place in Parimatch Junior Hockey League on December 4th. We take a look at them in this Wednesday action review. 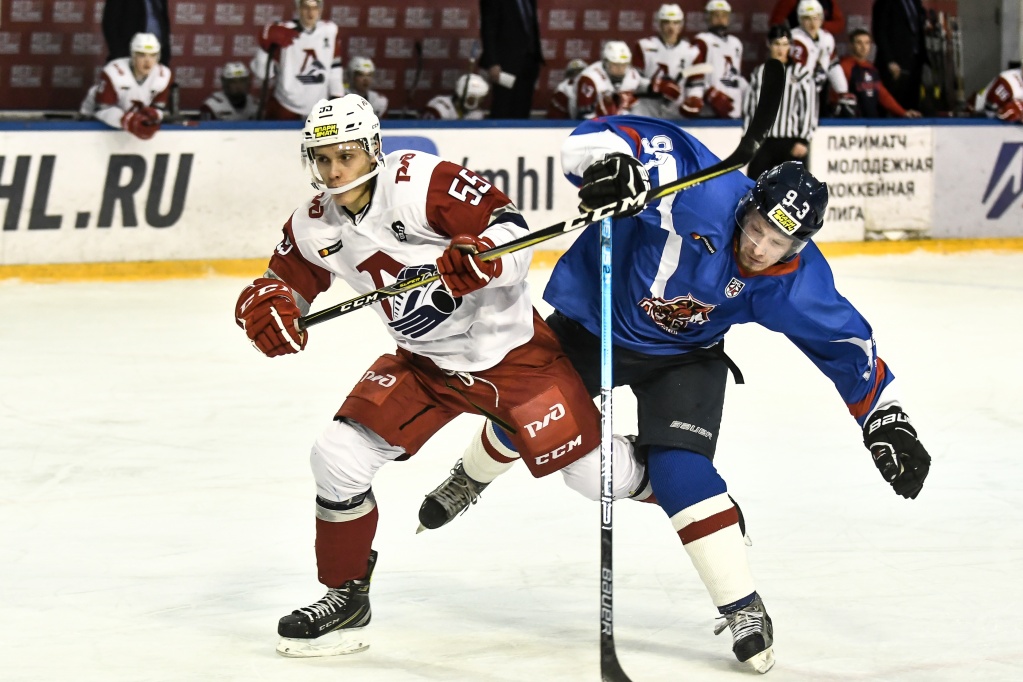 Loko Yaroslavl travelled to Dmitrov, Moscow Region where ORG Junior play their home games now. No one really thought the game was going to be a competition but reigning champions played it cool in the opening period, despite having the momentum on their side. Alexander Daryin opened up.

Yaroslavl scored three more goals in the second period – Maxim Beryozkin, Dmitry Tyuvilin and Danila Dyadenkin found the back of the net. Daryin took the stage in the third stanza as he completed his hat-trick in five minutes. ‘Railway men’ enjoy a blowout win over ORG. Yegor Gorshkov stopped just 17 shots for a shutout. 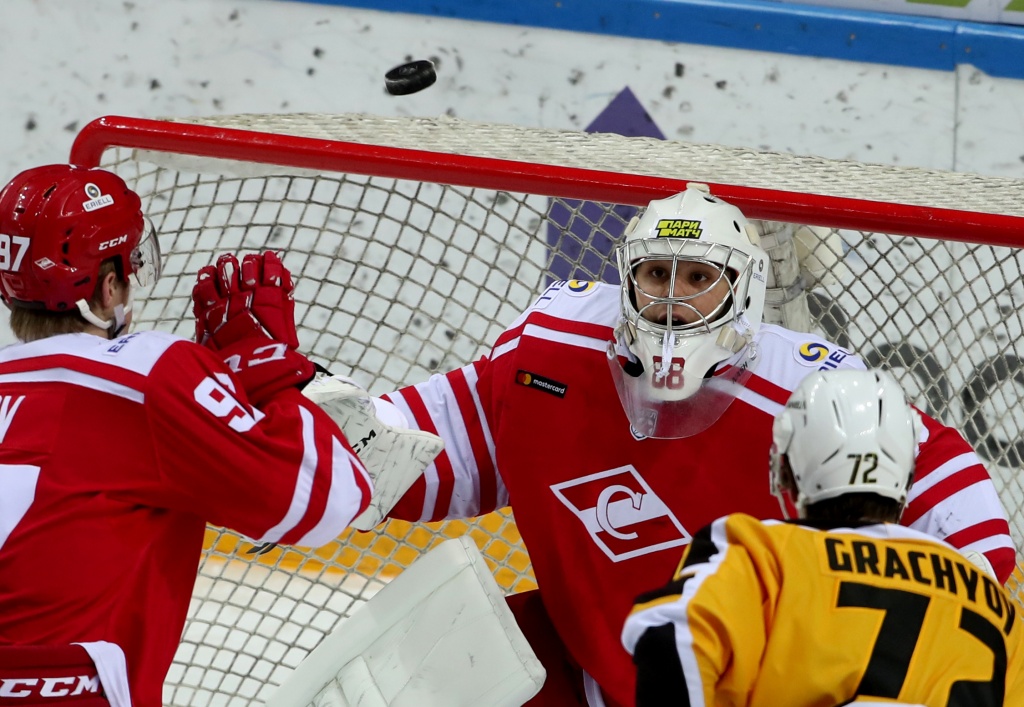 First game of the day was held in Moscow as JHC Spartak faced off against Almaz Cherepovets. The red-and-white were more aggressive in the early minutes but couldn’t capitalize on their scoring chances, including those on a power play. As for Cherepovets, they sat back and got in the lead midway through the period as Nikita Lukhovskoi found the back of the net. Spartak picked up the pace but instead of converted on a power play, they got scored on once again as Lukhovskoi scored his second of the game.

Cherepovets managed to even the game up in the second period and began peppering Dmitry Kulikov with shots. The game was close but Almaz were the ones who scored another goal – Oleg Bogatov got the marker. Home team did their best to get at least one goal back but the visitors stood their ground.
Moscow continued to bang on the door in the third stanza but Cherepovets still got an important solid win over their neighbors in the standings. Almaz win 3-0 as Anton Vinogradov earns a shutout.


Atlant lose to Sakhalinskie Akuly for the 2nd consecutive time 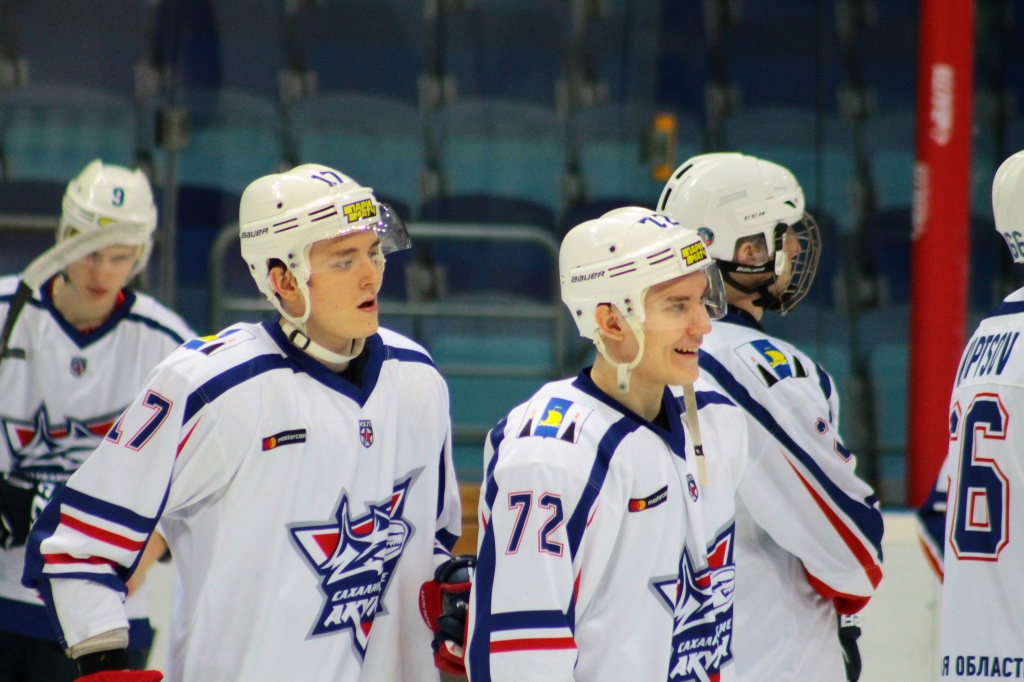 In the final game of the day Atlant Moscow Region faced Sakhalinskie Akuly in Mytischi. First period of play ended with the same score as the day before – Yuzhno-Sakhalinsk led by two. Ruslan Akhmetvaliev and Vladimir Krotov got the markers. The teams piled up a lot of penalty minutes into the second frame and the ‘Sharks’ converted on one of their power play attempts – Stanislav Basnev improved the lead to 3-0.

Sakhalinskie Akuly got a 10-minute misconduct called against them for unsportsmanlike conduct and home team got a goal back as Nikita Miller found the back of the net. It seemed that the visitors scored their fourth goal of the game late in regulation but video review confirmed that the puck never crossed the line. However, that didn’t affect their mood as they walked away with a 3-1 win on the road.

Omskie Yastreby got their second win in Almetyevsk 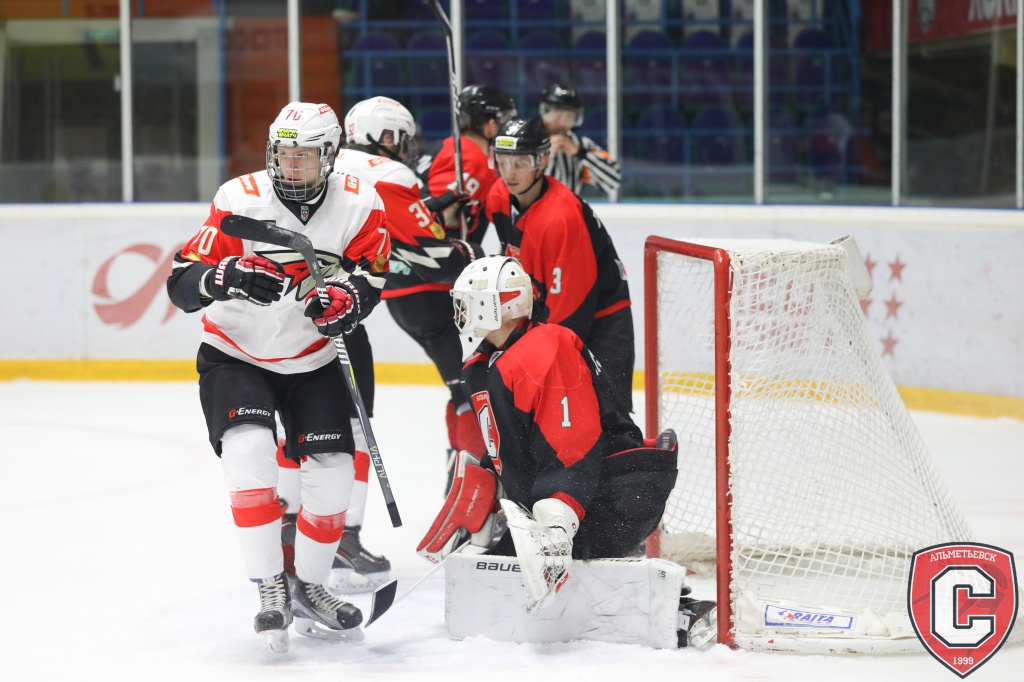 The ‘Hawks’ grabbed the momentum early on and got on the board as German Voloshin found the back of the net. The visitors continued to buzz around Sputnik’s net and midway through the opening period of play Vladimir Mashkov doubled the lead. Home team got a goal back before the intermission as Rishat Akhmetzyanov capitalized on a power play attempt but the teams headed to the dressing-rooms with Omskie Yastreby leading by one.

They also restored the 2-goal margin early in the second period. Ilya Chernikov beat Makar Kositskikh, who was then replaced in Sputnik’s net by Rail Nasyrov. The visitors found themselves down 2-man and Bogdan Korotkov pulled Almetyevsk back to within one. However, Sergei Yanevsky once again made it a 2-goal game soon after that.

Almetyevsk opted for fast-paced hockey early in the third stanza looking for the equalizer. Home team had the momentum on their side throughout the period and gave Nikita Dianov a lot of work to deal with. Rail Kabirov got another one past Dianov with just over a minute remaining to play in regulation. Sputnik coaching staff pulled their netminder for the extra-attacker but Semyon Astashevsky scored on the empty net to set the final score. Omskie Yastreby win 5-3 on the road.

Tolpar blow past Altay once again 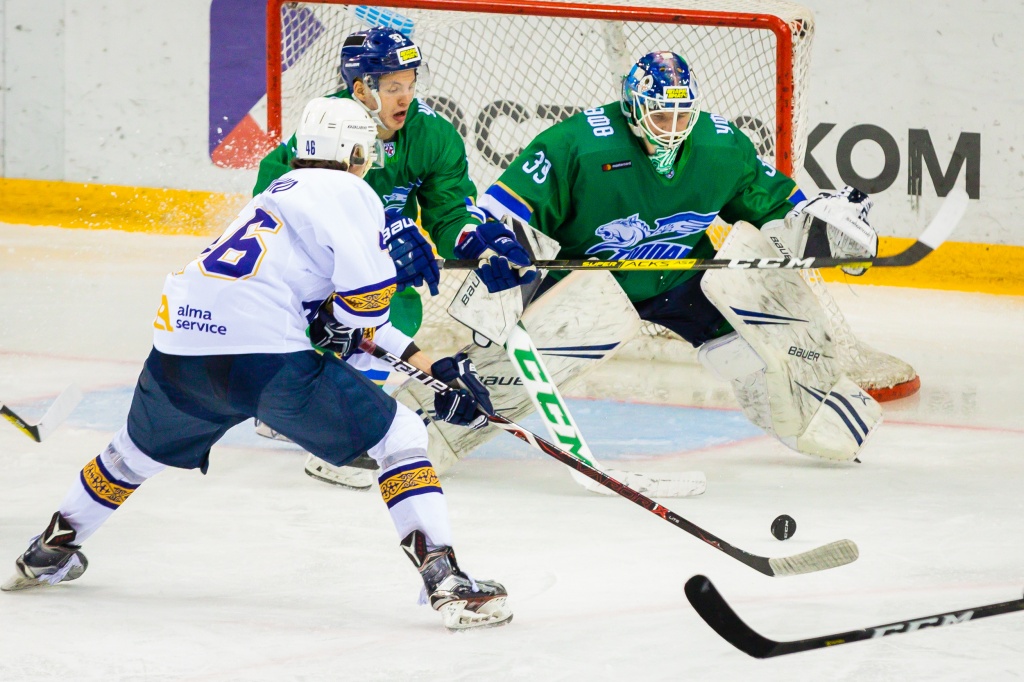 Just as in the first game of the back-to-back series, Tolpar Ufa grabbed the momentum right out of the gate but couldn’t find the back of the net for a long time. The visitors evened the game up midway through the frame but Tolpar did get in the lead – Denis Goryukhin got the marker. Late in the stanza home team solidified their lead as Danil Bashkirov found his target.

Ust-Kamenogorsk picked up the pace after the intermission and Maxim Chalov got a goal back less than a minute into the second frame. The visitors kept creating scoring chances but Ufa responded with a snipe by Nikita Skoropad. The teams traded good offensive rushes after that but the score remained unchanged in the period.

Home team got what they were looking for in the third period. They scored three goals on Altay in a span of 64 seconds. Vladimir Bakanin, Bogdan Ponomarenko and Yegor Suchkov got the tallies. The visitors couldn’t recover from that blow and Tolpar went on to beat Altay for the second consecutive time as they won 6-1.

Sarmaty get a narrow win over Kuznetskie Medvedi 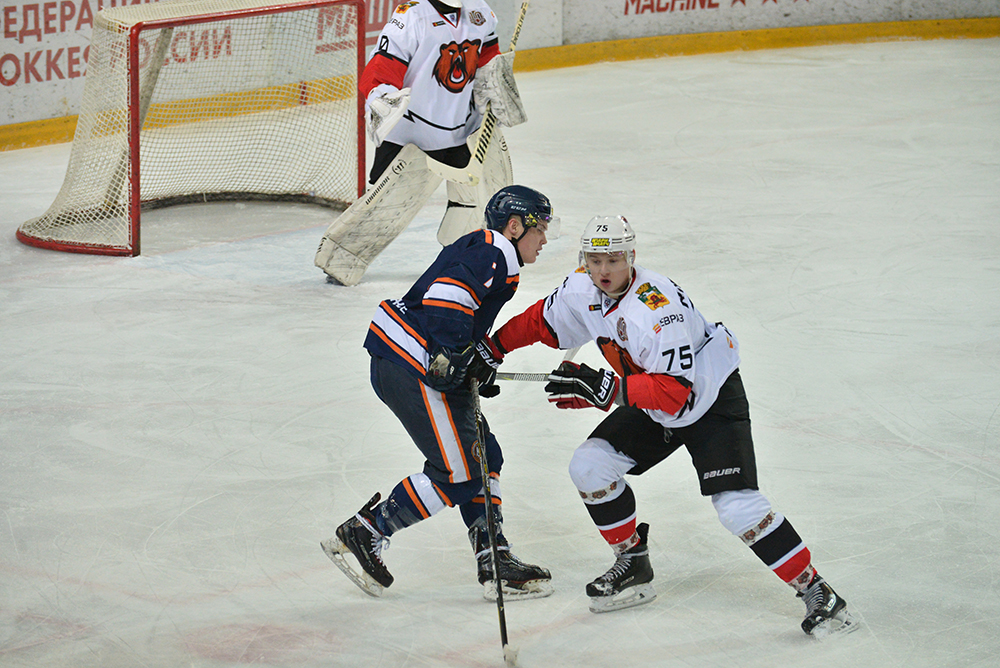 Grigory Rudakov got a game misconduct in the opening minute of the bout, leaving the visitors shorthanded for quite some time. Nevertheless, Sarmaty Orenburg couldn’t capitalize on the chance. After Kuznetskie Medvedi went back to playing full strength the game was close in the first frame and neither team could find the back of the net.

Sarmaty grabeed the momentum after the first intermission. Home team began spending long stretches in the offensive zone, peppering Mikhail Kuzmin with shots. ‘Bears’ defense managed to cope with that all period long but with a second on the clock Vladimir Ipatov did put Sarmaty in the lead.

Kuznetskie Medvedi tried to turn things around in the third period and find the equalizer but Sarmaty protected their lead well. Late in regulation the visitors pulled their goaltender and went for one final push but Orenburg stood their ground and enjoyed a win by the narrowest margin.


Taifun lose to Krasnaya Armiya in the shootout 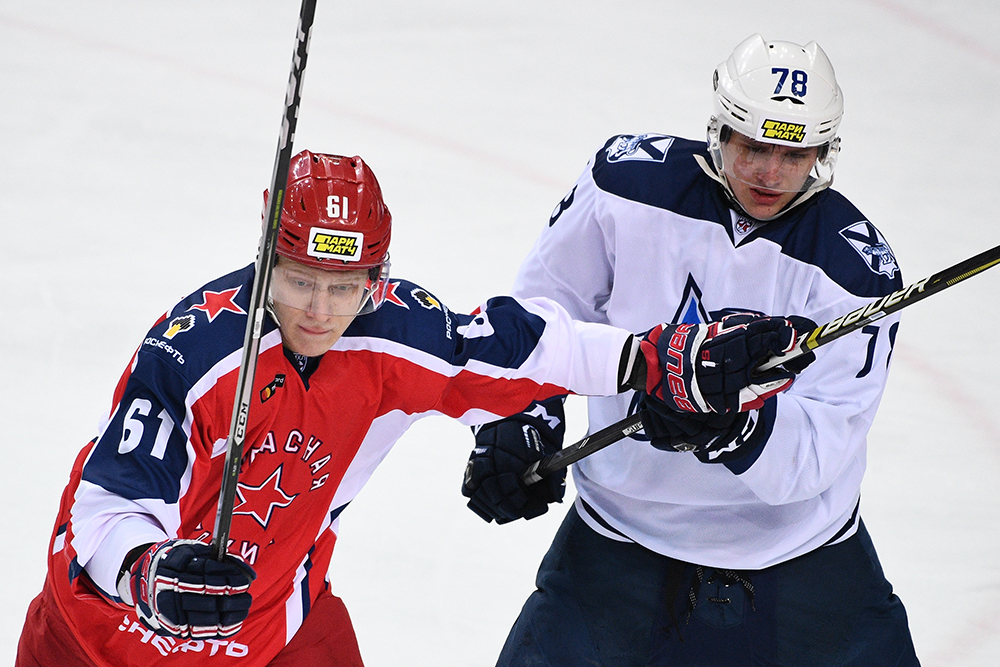 Krasnaya Armiya Moscow faced Taifun Primorie Region at CSKA Ice Sports Palace. ‘Army men’ had the momentum on their side in the opening period of play and took almost four times as many shots as the opposition. Nevertheless, they couldn’t break the deadlock, despite the fact they had a power play opportunity late in the stanza. The visitors evened it up on the shot-clock in the second period while Krasnaya Armiya still had trouble converting on their scoring chances, of which there was an abundance and Yegor Sinegubkin had to stay busy.

Third period of action followed a similar scenario and the fans weren’t treated to any goals once again. Overtime solved nothing either so the game had to be decided in the shootout. Krasnaya Armiya won the extra point as defenseman Denis Nedilko scored the winner. 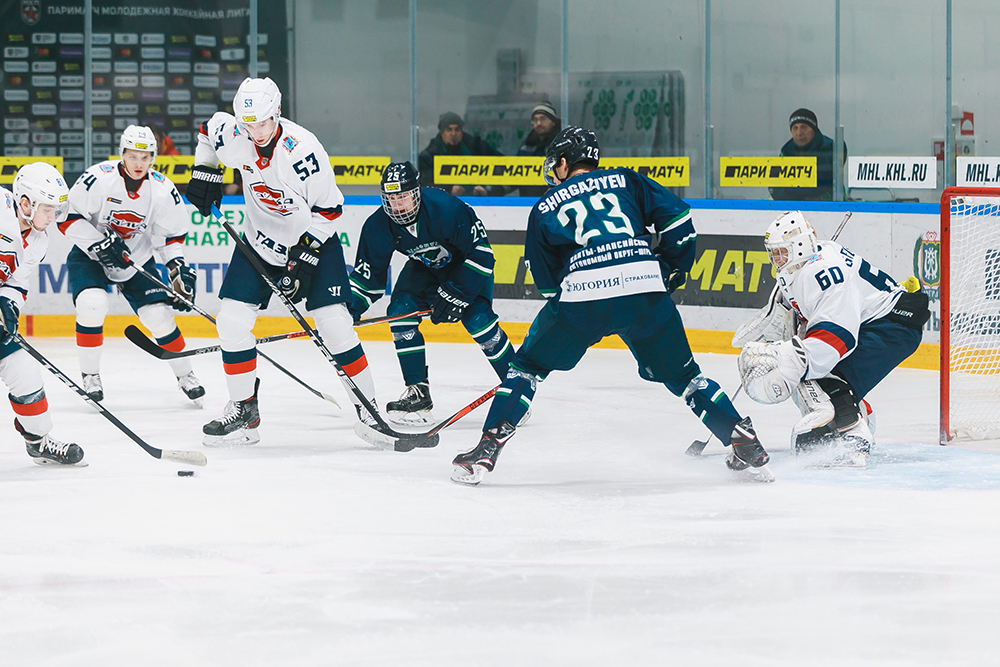 Mamonty Yugry played hosts to Chayka Nizhny Novgorod. The visitors got off to a good start and capitalize on one of their first rushes – Yegor Alexeyev sent it past Konstantin Kuzmaul. The ‘Mammoths’ brought it back to even with a tally by Ivan Ezhov but with 30 seconds remaining on the clock Maxim Rastvorov gave Nizhny Novgorod their second lead of the game. As the visitors got their first penalty of the game early in the second period – Denis Nikulin got the tally.

Khanty-Mansiysk pulled back to within one as Ivan Vorobyov found his target and the teams headed to the dressing-rooms with Chayka leading 3-2. That score proved to be final. Late in regulation Mamonty Yugry pulled their netminder for the extra-attacker but to no avail. Chayka win 3-2 on the road.

Tyumensky Legion fail to pull off a comeback in Nizhnekamsk Tyumensky Legion continued their stay in Nizhnekamsk and once again Reaktor showed them no hospitality. Home team built up a 2-0 lead less than a minute into the game as Andrei Chivilev and Danil Mikhailov got the tallies. Alexei Shchetilin replaced Pavel Guschin in goal after that. A little later Mikhailov scored his second of the game. Late in the period Alexander Golovin converted on a power play but Mark Tolkachyov restored the 3-goal margin before the intermission.

Home team went on to score two more goals in the second period of paly – Chivilev got his second of the game as well, while Maxim Polkin chipped in a tally of his own. The visitors attempted a heroic comeback in the third stanza but all they could do was get back to within two. Maxim Bogdan scored a pair, while Andrei Kovalenko also got a goal. Reaktor win 6-4 on home ice.