Sputnik
News
SKA-1946 win first championship in their history! Michkov scores game winning lacrosse-style goal
“I’ll try to make it to the senior team.” Yaroslav Likhachyov finished his JHL career with a team’s record
The talent of the CSKA system rocks in the JHL playoffs. Agatha Christie helps Prokhor Poltapov prepare for games
“It’s a shame that three years in the JHL flew by so fast” – Matvei Kokovin lost a bet to Alexei Shevchenko as the White Bears failed to qualify to the playoffs
“I gave myself a choice: either to get stronger and move on, or to quit hockey” – SKA-1946’s leader talks about his season, social media, and hockey life
“Nizhny Tagil is not what it was ten years ago” – Vasily Atanasov about his hometown and his play with Mamonty Yugry
“I want to break Guskov’s record” Vyacheslav Peksa talks about his late arrival to hockey and his progress in the JHL
“I hit the rock bottom, and then I got out of it. Now I have what to pass to our guys” – Nikolai Lemtyugov talks his debut as a coach 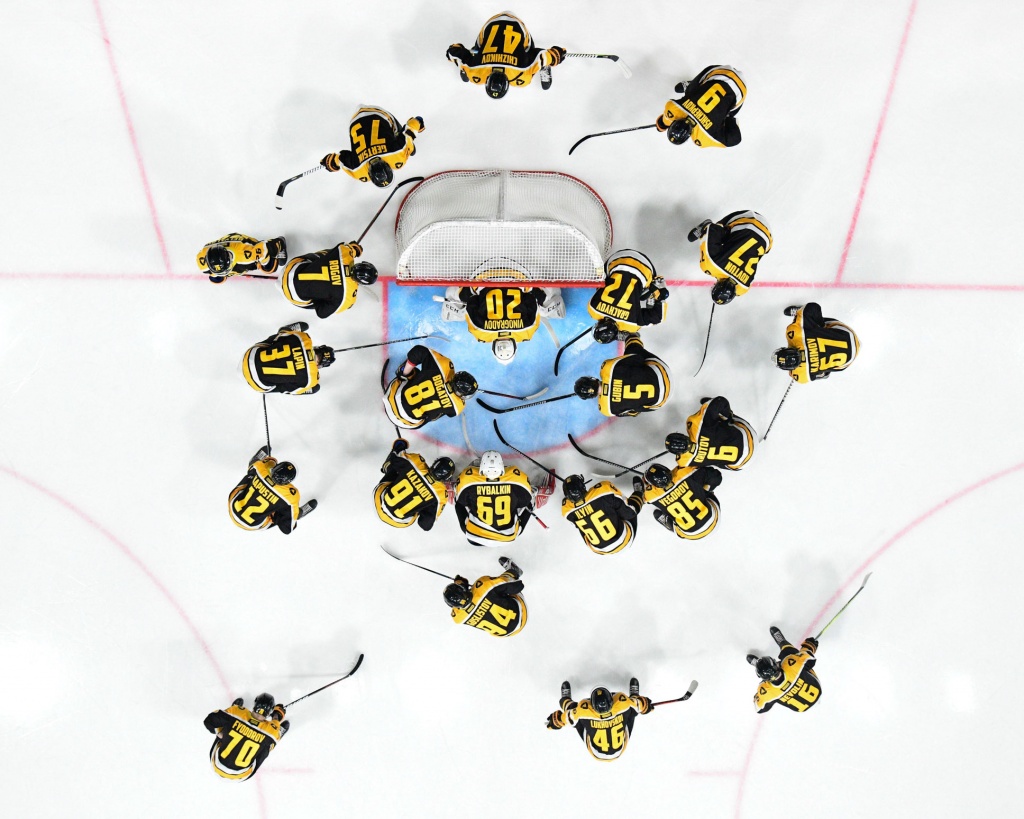 In the final game of the day, which was held in Cherepovets, Almaz hosted Sakhalinskie Akuly. The game was close in the opening period but the visitors capitalized on their scoring chances better – Daniil Glukharyov and Alexei Bozunov gave Yuzhno-Sakhalinsk a comfortable 2-0 lead. Cherepovets had the momentum on their side in the second frame but they managed to get a goal back only two minutes into the third – German Grachyov got the tally.

Stanislav Basnev restore the 2-goal advantage for Sakhalinskie Akuly but home team managed to bring it back to even and force overtime. Nikita Guslistov first brought Almaz back to within one and then leveled it late in regulation with a power play goal. Another overtime didn’t solve anything and the ‘Sharks’ went on to win it in the shootout. Viktor Bashlayev scored the winner. 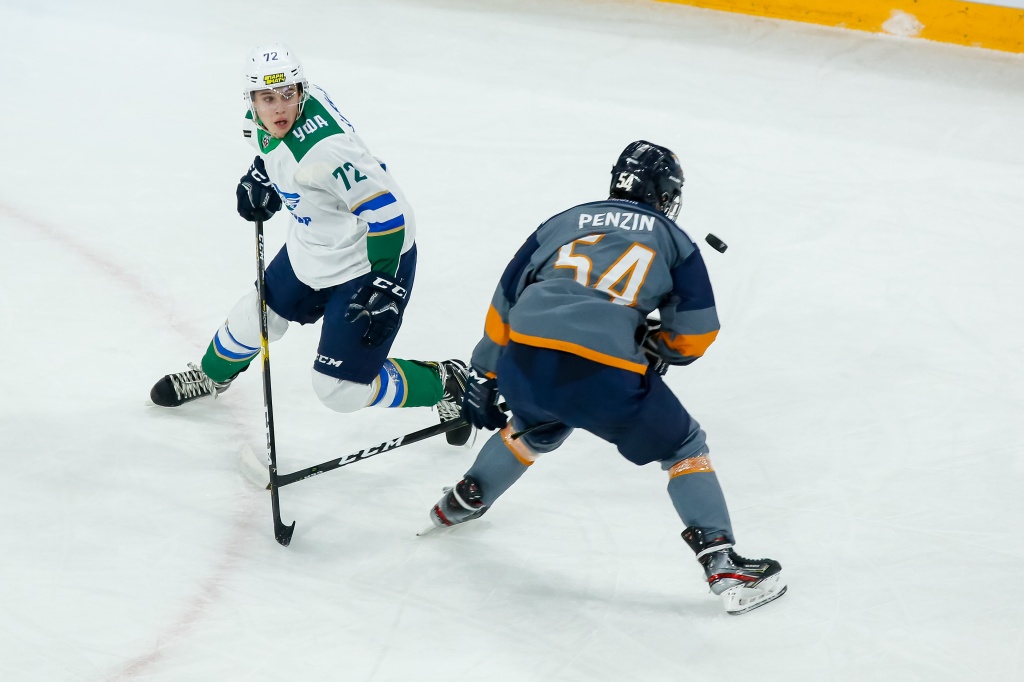 First game of the day was held in Magnitogorsk where Stalnye Lisy played hosts to Tolpar Ufa. The visitors did better in the opening period of play as they scored two goals past Nikolai Shashkov. Mikhail Kozlov put Ufa in the lead as he buried the rebound on the wide open net. Midway through the period Danila Alalykin took a shot and the puck dinged into the net of the crossbar. Video review confirmed that it was a good goal.

Magnitogorsk got a goal back in the second frame – Semyon Buyvan fired one from the blue line and sent it just under the bar. Ruslan Gospodynko created enough traffic in the slot and Tolpar netminder couldn’t react. Eight minutes into the period Gospodynko tipped another one home from the slot. The game went to overtime and Ufa won the extra point as Danila Bashkirov found the back of the net. Tolpar beat Stalnye Lisy 3-2 in overtime. 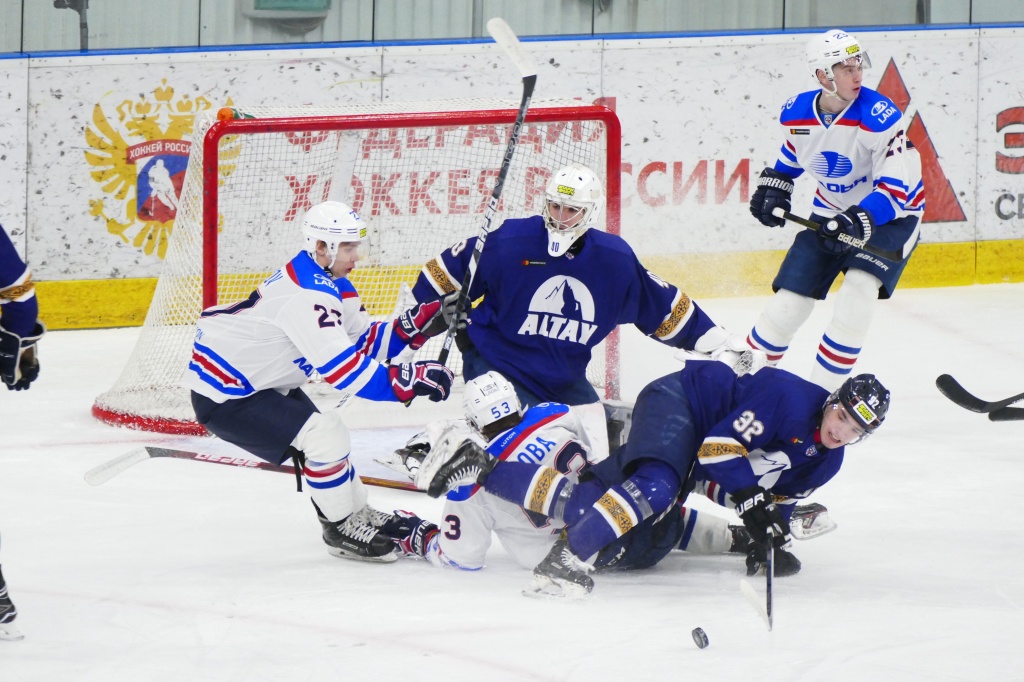 Altay Ust-Kamenogorsk defended the ice against Ladiya Togliatti. Home team got off to a great start and managed to capitalize on their initial power play attempt of the game – Ivan Podshivalov scored off assist by Andrei Lagunov. Late in the period Altay’s long passing play led to another tally – Nikita Nazarov skillfully tipped the puck in from the slot. Togliatti didn’t even think of giving up and scored twice after the intermission. Veniamin Tsitser one-timed it home off a pass from behind the net to put Ladiya on the board.

A little later Artyom Yakutov scored a shorthanded goal after Togliatti had gotten caught with too many men on the ice. With seven seconds remaining to play in the period Nazarov scored his second of the game and gave Altay their second lead of the game. Five minutes into the third frame Yegor Sofyin scored the fourth goal for Ust-Kamenogorsk. Togliatti scored a shorty once again as Stepan Steshenko found his target but they failed to find the equalizer in the final ten minutes of regulation. Altay protected the lead and got a victory, despite allowing two shorthanded goals in a single game. 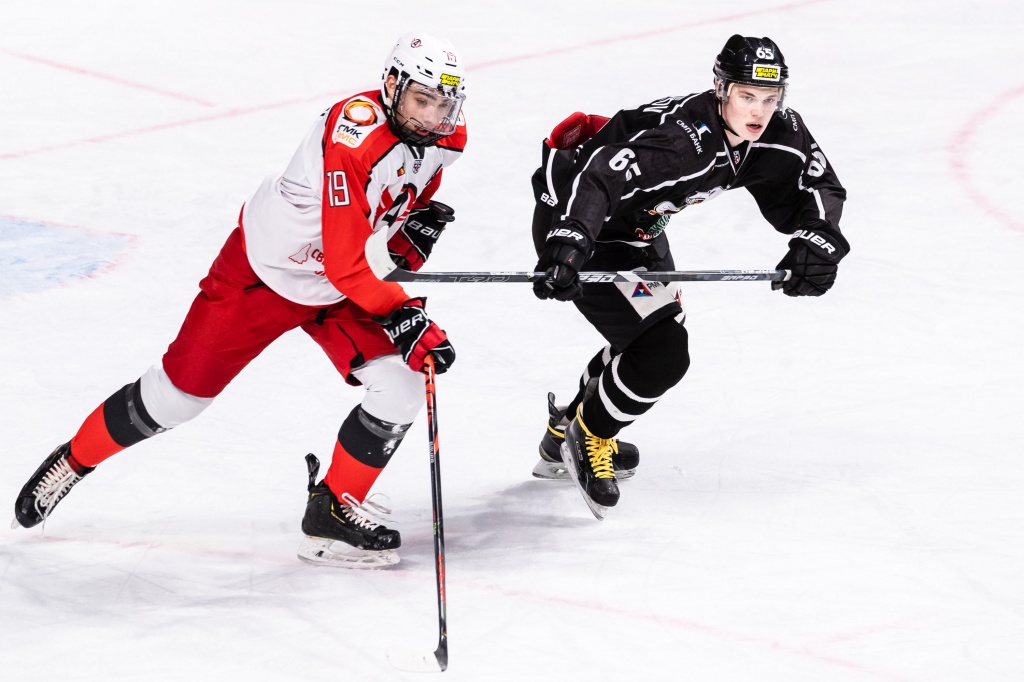 Avto Yekaterinburg visited Chelyabinsk. Last season’s finalists went up against Belye Medvedi. Just five minutes into the game Tigran Yarulin and Konstantin Suslov dropped the gloves. After a couple of off-setting minors the visitors scored in a 4-on-4 format – Danila Okhov sent it past Ilya Gorbunov. Early in the second period of action Yekaterinburg’s Igor Galygin got a minor and ‘Polar Bears’ capitalized on the ensuing power play. Kirill Kadyshev sniped one just under the bar to make it 1-0 after 40 minutes of play.

The teams traded goals in the third frame. Maxim Sedov scored for Avto, while Yegor Stepanov got another power play tally for Chelyabinsk. Nevertheless, Vitaly Solovyov’s men still marched on to win the game, albeit in overtime. Yuri Zhuravlyov scored on the rebound halfway through the extra period. 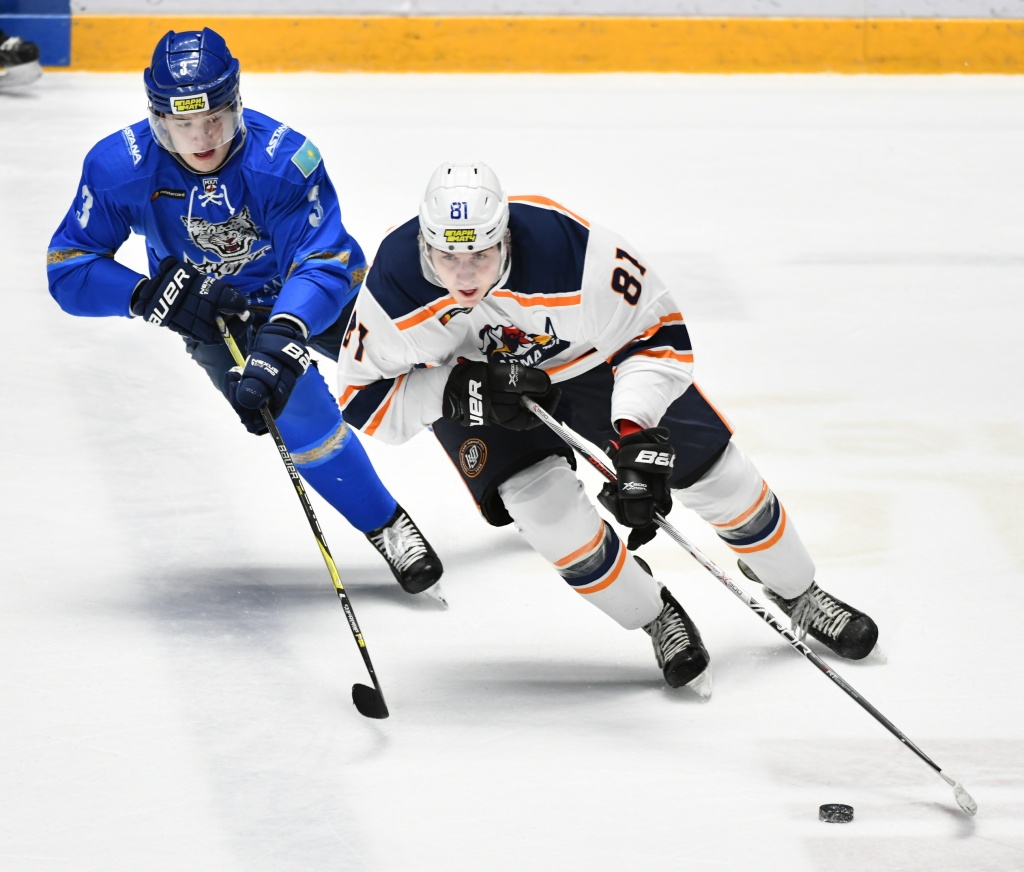 Snezhnye Barsy crossed sticks with Sarmaty Orenburg in Nur-Sultan, Kazakhstan. The visitors seemed more aggressive in the opening period of play. They had several power play opportunities but failed to capitalize on any of them. However, the teams exchanged goals in the second frame. Home team grabbed the lead in the early minutes as Oleg Boyko found the back of the net and ten minutes later Alexei Barkhatkin brought it back to even.

Orenburg got a penalty shot called against them early in the third stanza but Stanislav Filippenko couldn’t convert on it. As for Sarmaty, they pounced on their chance – six minutes into the period Ivan Ukolov got one in on a man-advantage to bring his team the fourth win on this road trip. 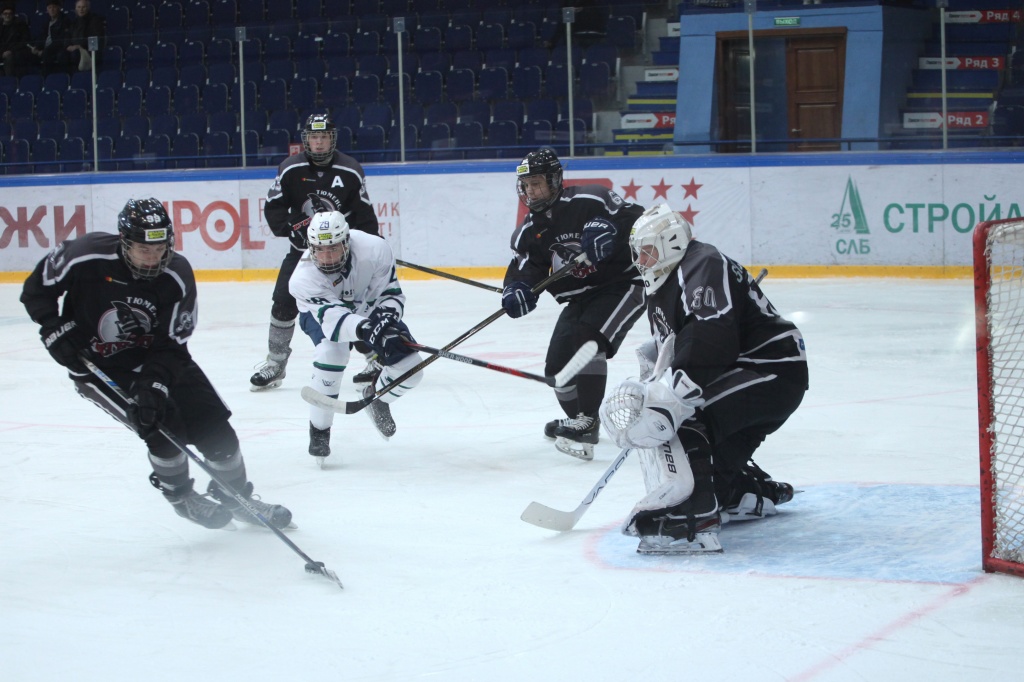 Tyumensky Legion played hosts to Mamonty Yugry at Tyumen Sports Palace. The visitors took almost twice as many shots in the opening period of play as the opposition but managed to get just one goal out of it. Five minutes in Legion goaltender Alexei Schetilin got a minor for delay of game and Khanty-Mansiysk converted on the ensuing power play. Kirill Rudenko found the back of the net. Eight minutes into the second period Rudenko scored his second of the game as he buried the rebound following a shot by Ivan Ezhov.

Only after Ivan Vorobyov improved the lead to 3-0 did Tyumensky Legion respond. In a span of 30 seconds Dmitry Sidorov and Vitaly Garkusha brought it back to a 1-goal differential. Home team shots themselves in the foot late in regulation as they were a bit clumsy with a line change and got caught with too many men on the ice. Mamonty Yugry worked the clock and won 3-2 on the road. 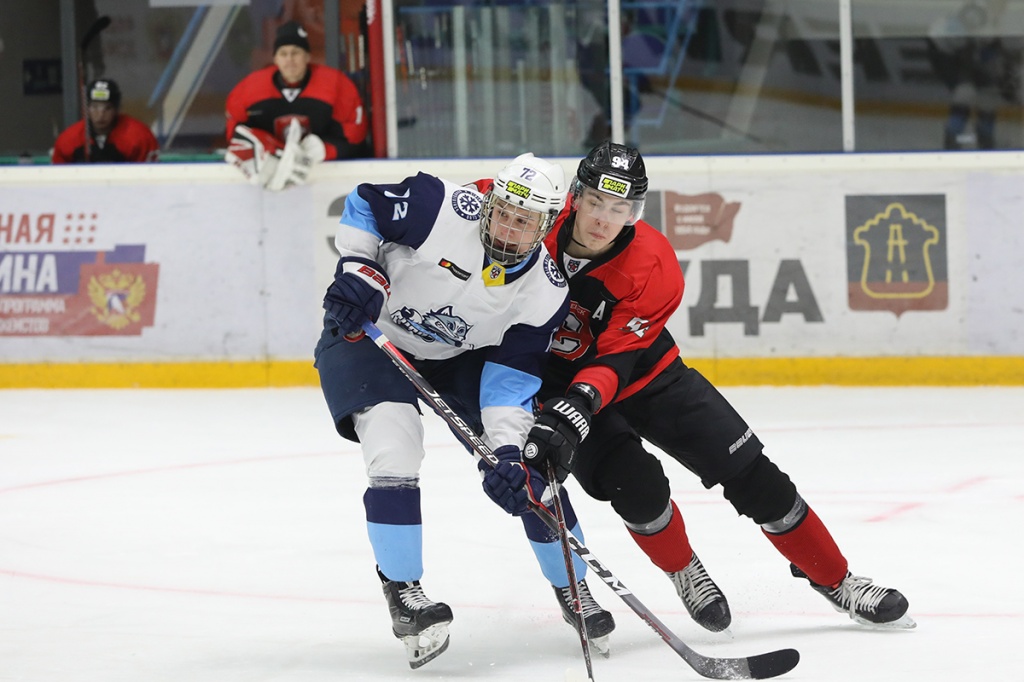 Sibirskie Snaipery went to Almetyevsk to face Sputnik and ran into a penalty problem right out of the gate. Home team didn’t convert on three consecutive power play attempts but did open scoring at even strength. Edgar Chindarev exploited the fact that Vladislav Shcherbakov was screened and scored with a long shot. Just as Timur Zakirov stepped back onto the ice from the penalty box in the second period, he received an outlet pass and broke away for a 1-on-0. Nevertheless, he couldn’t convert on the chance and Sputnik still had a narrow lead.

Novosibirsk brought it back to even after Rail Sharipov got a penalty – Makar Nikishanin found the back of the net. The visitors brought it back to even after Daniil Melnikov gave Sputnik another lead – Nikita Potapov scored on a power play within the final five minutes of regulation. Overtime solved nothing and Almetyevsk went on to win it in the shootout. Daniil Melnikov scored the winner. 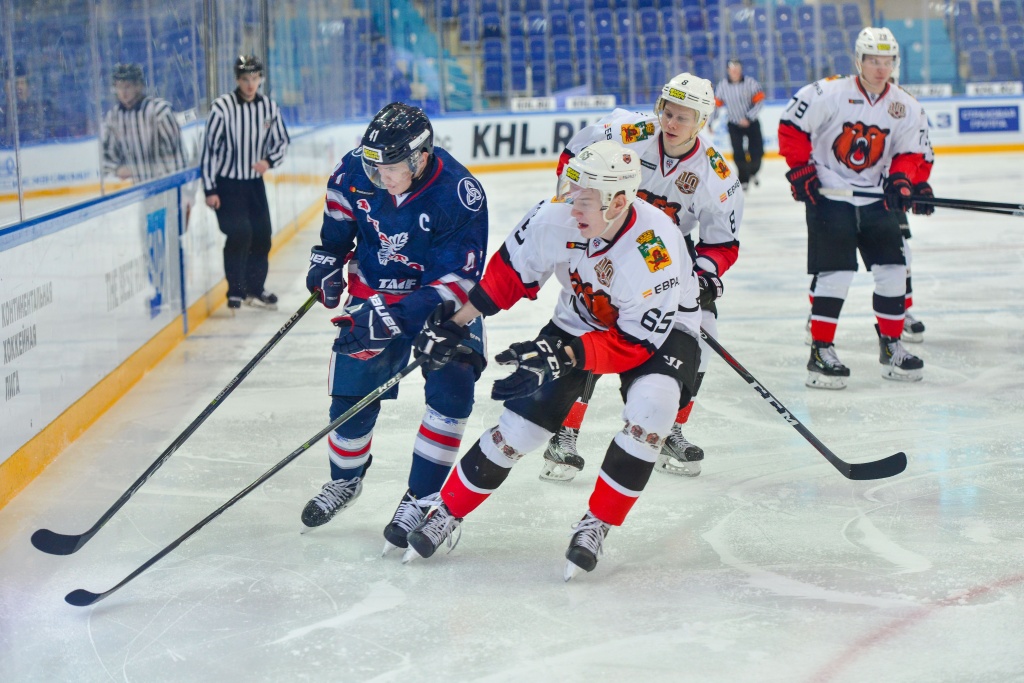 Reaktor Nizhnekamsk played against Kuznetskie Medvedi. Both teams needed points in this one. Reaktor were looking to solidify their position in the playoff zone, while the ‘Bears’ wouldn’t mind to get out of the bottom of the Eastern Conference standings. The visitors opened scoring in the first period of play. Notably, they did shorthanded – Vadim Zakhmarevich converted on a counter-attack. Nizhnekamsk responded with a tally by Maxim Polkin early in the second period. However, Ivan Khrunin put Novokuznetsk back in the lead soon enough.

Home team managed to tie it up before the intermission and then got in the lead as Andrei Chivilev and Bulat Shambazov found the back of the net. Bulat Zagidulin and Vladislav Murashov gave Kuznetskie Medvedi the lead but they couldn’t protect it late in regulation. Polkin scored his second of the game to send it to overtime. Nevertheless, Novokuznetsk did secure the extra point as Andrei Sokolov scored overtime-winner.