KRASNAYA ARMIYA AND IRBIS BLOW PAST OPPOSITION, SPARTAK GET EVEN WITH KRYLIA SOVETOV. NOVEMBER 26TH REVIEW 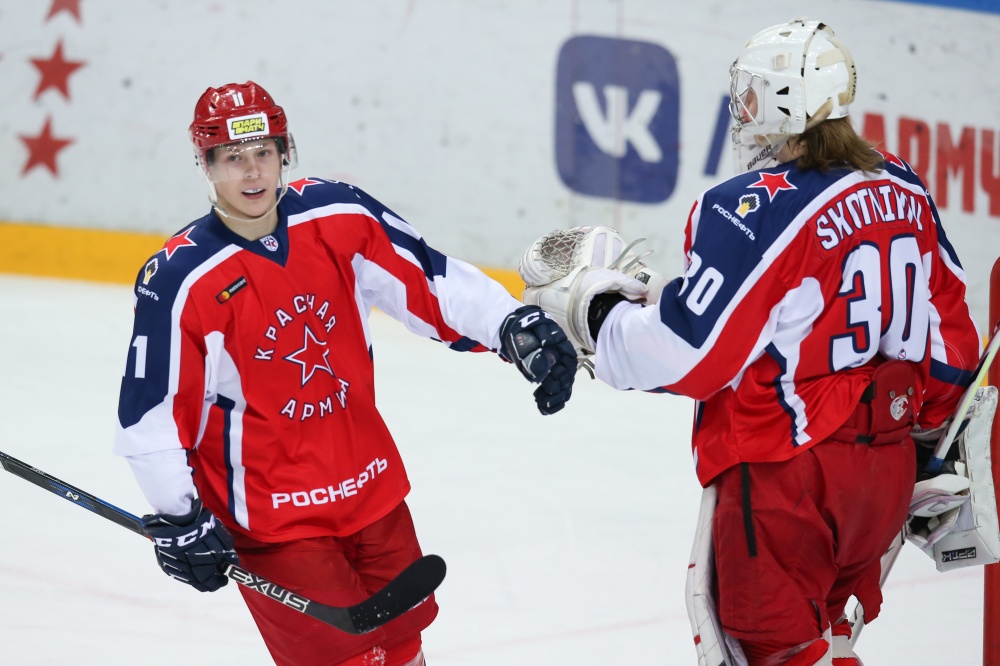 Six regular season games took place in Parimatch Junior Hockey League, five of which were Western Conference matchups. We take a look at Tuesday action in this review. 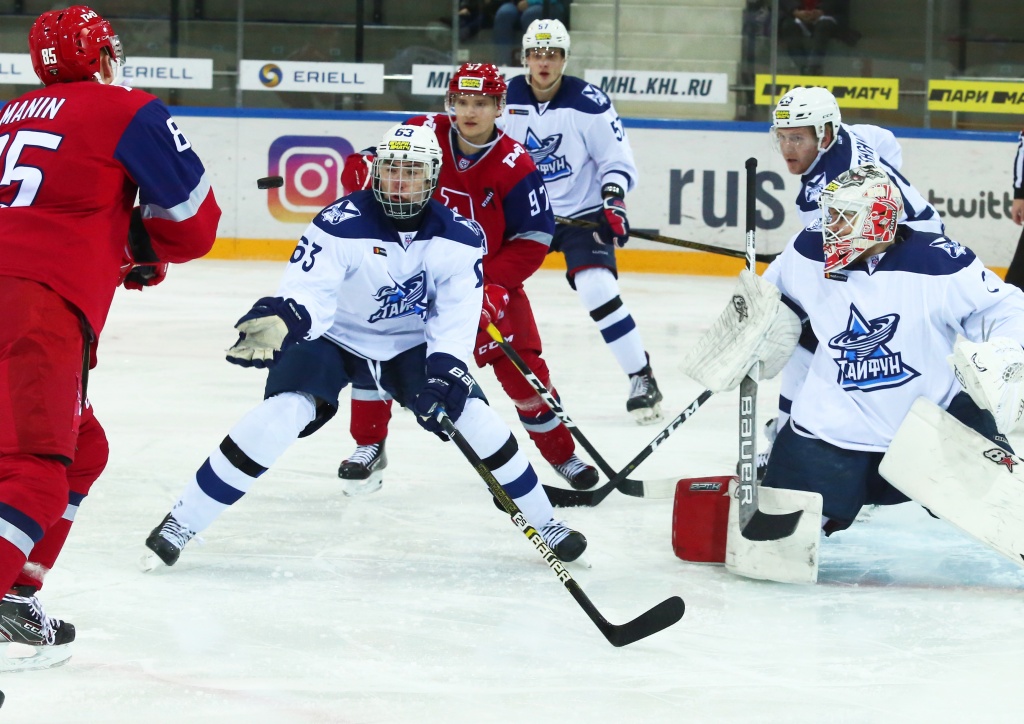 Moscow rivalry game took place at the CSKA Arena auxiliary rink as JHC Spartak faced off against Krylia Sovetov. First period of action turned out to be high-scoring. The visitors were down by two just seven minutes in as Zakhar Shablovsky and Kirill Tagirov found the back of the net. However, ‘Soviet Wings’ got back even before the intermission – Yegor Zudilov scored one at even strength and Sergei Mozhayev capitalized on a power play attempt to make it a 2-2 hockey game.

14 minutes into the second stanza Alexander Oskin gave Spartak their second lead of the game. He scored his second of the game early in the third period but soon after that Alexei Shumilov pulled Krylia Sovetov back to within one. In the last minute of regulation Tagirov scored his second as well as he hit the empty net. The red-and-white win 5-3. 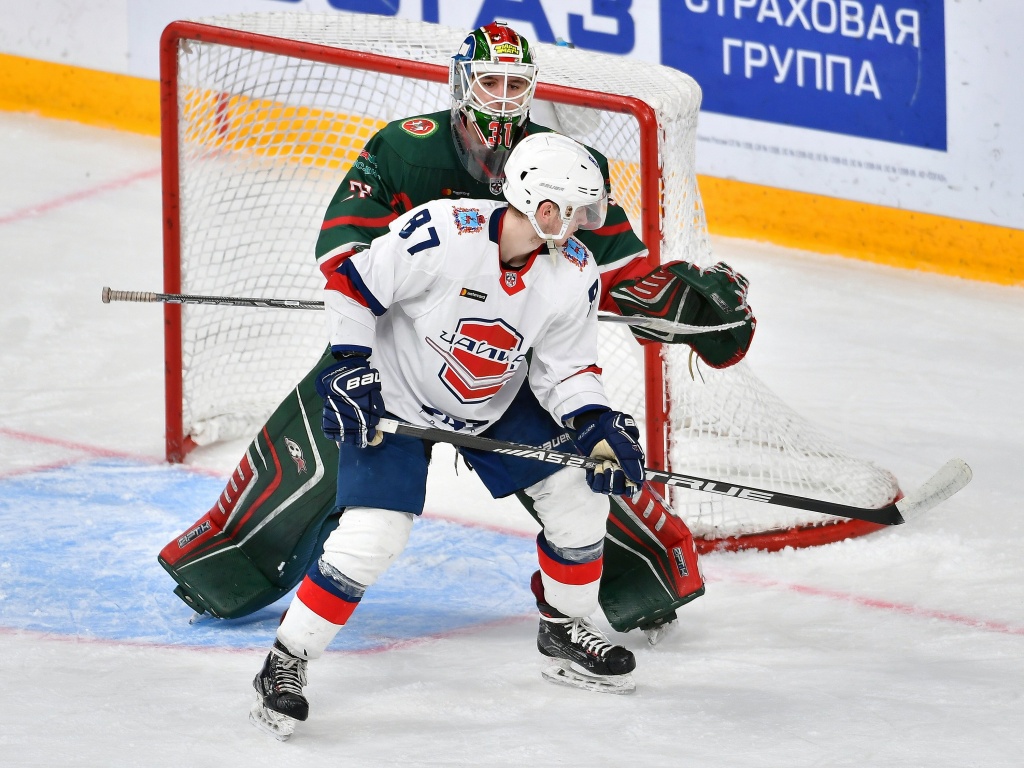 Irbis Kazan enjoyed a great first period of action against Chayka Nizhny Novgorod. Kazan scored as many as three unanswered goals. Ilnur Shabanov, Daniil Khristanov and Denis Komkov found their targets. Chayka also had two power play opportunities but they failed to convert on either of them. Kazan kept on scoring after the intermission. Komkov scored his second of the game shorthanded and three minutes later Artur Brovkin got a tally as well.

Nizhny Novgorod got a goal of their own only after Brovkin had improved the lead to 6-0 – Danila Platonov scored in the last minute of the second period. However, three minutes into the third stanza Roman Poluvytnov restored the 6-goal margin for the home side. With three minutes remaining to play in regulation Komkov scored his second of the game to the final score. Kazan win 8-1 on home ice.

After the first game of the back-to-back series against Taifun Primorie Region, which Loko Yaroslavl won only in overtime, Igor Melyakov’s coaching staff made a lot of adjustments to their roster. Daniil Gutik, Vladislav Lukashevich and Dmitry Nazarov were healthy scratches for the game, while Zakhar Pulchenko, Matvey Bannikov and Semyon Sigorin were the replacements. On top of that Yaroslavl head-coach shuffled all of his defensive pairings and put Yegor Gorshkov in goal instead of Vladislav Okoryak.

The teams came out hard for the opening period of action but there weren’t a lot of scoring chances for a while. The pace of the game picked up towards the intermission when the teams exchanged a flurry of shots. First Alexei Goryachev hit the post and a few minutes later Gorshkov didn’t cover up the puck on a soft shot by Ivan Bunov. However, none of Taifun forwards could poke it into the net.

With three minutes until the first intermission home team opened scoring. Roman Bychkov took a shot from the blue line, the puck got stuck in the slot, where it was picked up by Yegor Manin, who lead the ‘railway men’ in scoring, and he swept it into the net. Primorie Region coaching staff challenged the play but the goal counted after video review.

It seemed that the score wouldn’t change before the intermission but with 30 seconds on the clock Vladimir Kapkin won the battle for the puck in the offensive end, got possession behind the net and passed it to the slot – Alexander Trapeznikov tapped it home at the far post.

Second period featured no goals, even though the teams traded man-advantages. ‘Railway men’ took four times as many shots (20 against 5). The fate of the game was decided in the early minutes of the third stanza. It took Loko captain Yegor Manin just seven minutes to complete his hat-trick. And yet Loko couldn’t avoid a nervous finish. Vladimir Kapkin capitalized on a power play as he elevated the puck over Gorshkov’s shoulder. Nevertheless, Taifun couldn’t find the equalizer to force overtime in the remaining time. Loko grabbed the momentum and kept creating scoring chances right till the final buzzer. 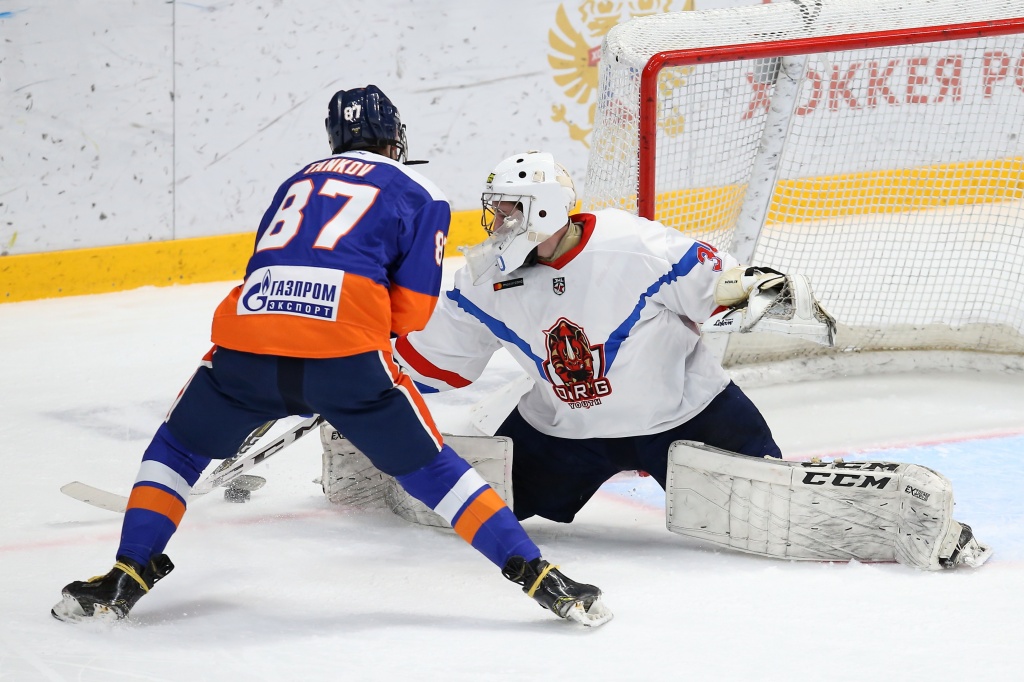 SKA-Varyagi made a few adjustments to their roster prior to the game. Yuri Dobryshkin dressed Nikita Dmitrov, while Stepan Anisimov joined the team from SKA-1946 St. Petersburg. ORG Junior Beijing were missing their top scorer Dmitry Zherebkin for the second straight game as he’s recovering from a minor injury. Defenseman Alisher Mubarakshin watched the game from the stands.

Teams opted for cautious hockey in the early minutes. Both SKA-Varyagi and the ‘Rhinos’ had a power play opportunity but created very few scoring chances. Home side opened scoring five minutes in. Matvey Gorbushin pounced on the rebound and jammed it past Vladislav Pakin from the slot. Teams switched to playing offensive-minded hockey towards the end of the period. With three minutes until the intermission ORG rookie Guo Jianing scored his debut Junior Hockey League goal. The forward streaked down the wing, shoved his opponent and fired home a backhander on the far-side past Valery Brinkman, who started in net for the third consecutive game.

The parity didn’t last on the scoreboard. In the very next shift Kirill Tankov made no adversary entering the zone. The forward took a shot from open ice and it flew in just under the blocker of Pakin.

The visitors played more aggressive in the second period of action and managed to tie it up once again. Ilya Selin, who picked up an assist in the first frame, took a muffin of a shot but Brinkman couldn’t stop it with his glove and the puck squeaked into the net. Home team got two minor penalties in a row after that and the second one proved to be fatal. Guo Jianing took a shot from mid-range off the boards and got another one past Brinkman, giving the Rhinos their first lead of the game. Kirill Obyskalov relieved Brinkman in goal after that.

Both teams started playing physical and a lot of battles popped up all over the ice. With just over six minutes remaining on the clock SKA-Varyagi borught it back to even again and then got in the lead. First Yuri Gornushechkin beat Pakin with a mid-range shot and then Stepan Anisimov found the back of the nt. Midway through the third frame Gornushechkin scored his second of the game to put it out of reach.

Leningrad Region team win their 6th game out of seven, while ORG Junior lose for the 32nd consecutive time. 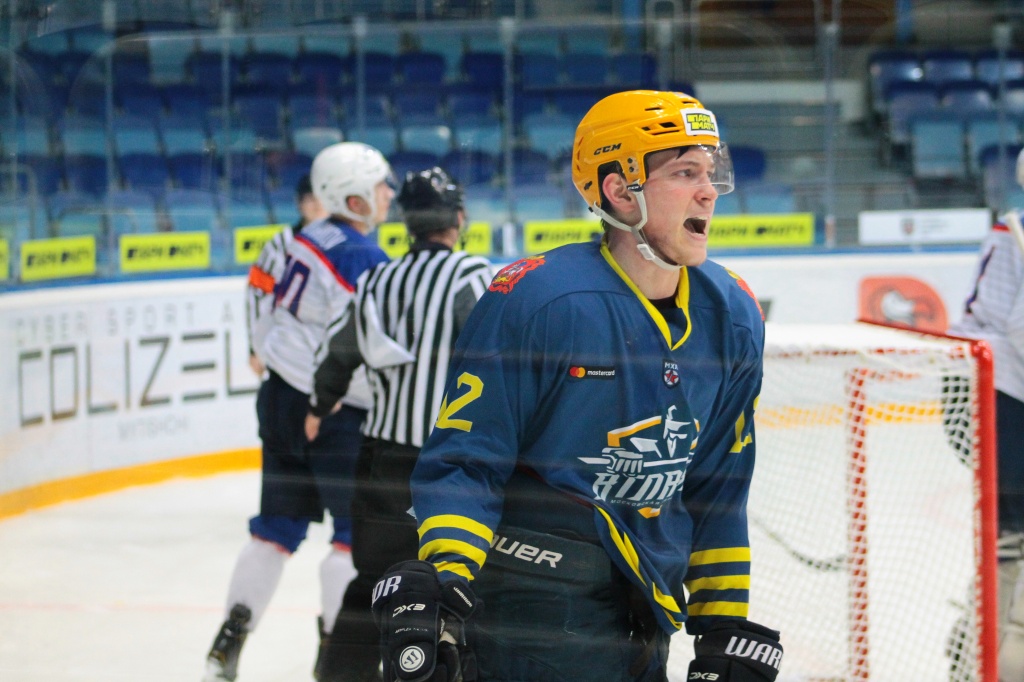 Second game of the back-to-back series between Moscow Region rivals turned out to be not as high-scoring as the first. The fans didn’t get to see any goals for 59 minutes of play. Home side had a slight advantage throughout the game but Atlant struggled to get on the board. Leonid Sklyar, who started in goal for Kapitan this time around, looked solid and made 39 saves.

With 77 seconds on the clock home team finally managed to break the deadlock – Daniil Shushin found the back of the net. It took officials a while to review the play but the goal did count in the end.

Kapitan called timeout and pulled their netminder for the extra-attacker but failed to find the equalizer. Dmitry Zvyagintsev scored on the empty net to seal the deal. Maxim Koloberdanets stopped 24 shots for a shutout. 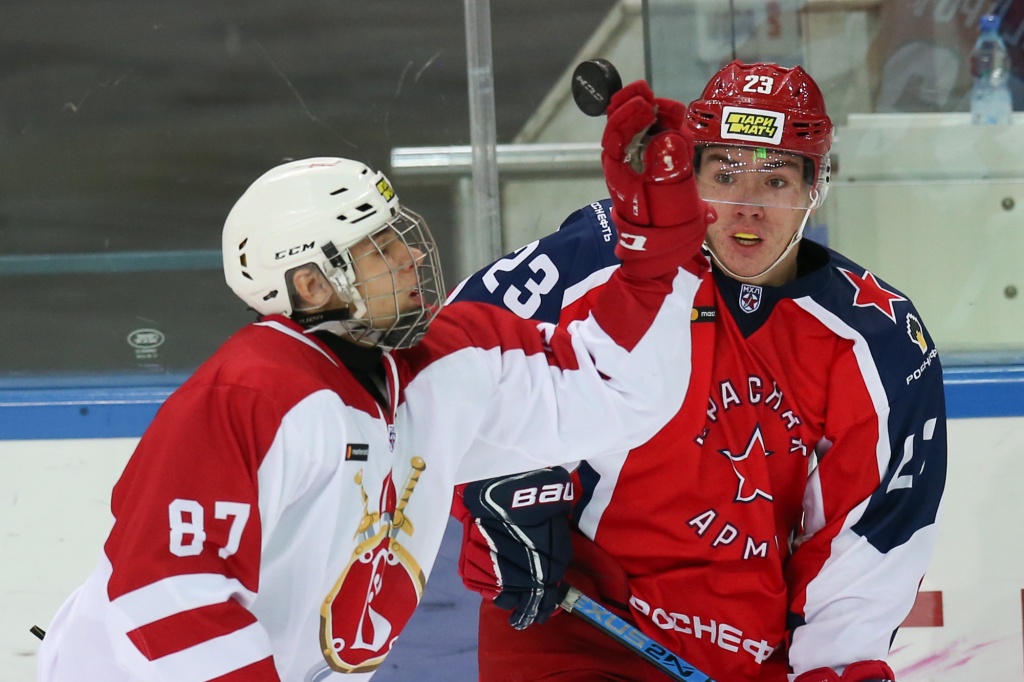 First game of the day was held at CSKA Ice Palace of Sports as Krasnaya Armiya Moscow went up against Russkie Vityazi. Opening period of play finished with a 1-1 tie. ‘Army men’ scored first – Alexander Chyorny found the back of the net. Moscow Region team found an answer midway through the frame – Vadim Khamidulin sent one past Vsevolod Skotnikov. Krasnaya Armiya scored two more goals in the second period – Leonid Klimov got one in over the goal-line in a 4-on-4 situation and Semyon Roslyakov improved the lead to 3-1.

Moscow capitalized on another scoring chance in the third stanza. Daniil Zaruba scored his first career Junior Hockey League goal. Krasnaya Armiya secured the blowout win late in regulation – Klimov got his second of the game, while Yegor Kuzminov set the final score. The red-and-blue win 6-1 on home ice.