KRYLIA SOVETOV GET THEIR FIRST WIN OVER SPARTAK ON THE ROAD IN 10 YEARS. ILYA BADANIN DEBUTS FOR CHAYKA. NOVEMBER 25th REVIEW

Taifun
News
“I bought a cake and gave flowers to my mom with my first paycheck.” Yaroslav Tsulygin – about his JHL debut with Tolpar
Edgar Varagyan: “When we were on the plane, guys told me: “He is an enforcer, he would beat you up with no sweat.” I thought: things happen, he would beat me up and so what?”
“As time goes by, taking a flight to Sakhalin feels almost like being stuck in Moscow traffic.” Daniil Veremeichik – the JHL's Best Player on Social Media
“Working out in a gym is a type of rest for me.” Ivan Murashov had the best season of his career, dreams of playing in the KHL and has not eaten any fast food for two years
“Condensed milk is the only unhealthy food available for the national team.” Raul Yakupov – about the Black Sea Cup, the KHL debut and the season with Reaktor
“Four years in the JHL was a great time. Winning the Cup with Dynamo was the best moment.” Ivan Didkovsky about junior phase of his career
Metsola-type player of Krasnaya Armiya, Peksa’s progress and solid Gromovik. Dream team goalies
Arseny Gritsyuk is the top rookie of the KHL season
Share

KRYLIA SOVETOV GET THEIR FIRST WIN OVER SPARTAK ON THE ROAD IN 10 YEARS. ILYA BADANIN DEBUTS FOR CHAYKA. NOVEMBER 25th REVIEW 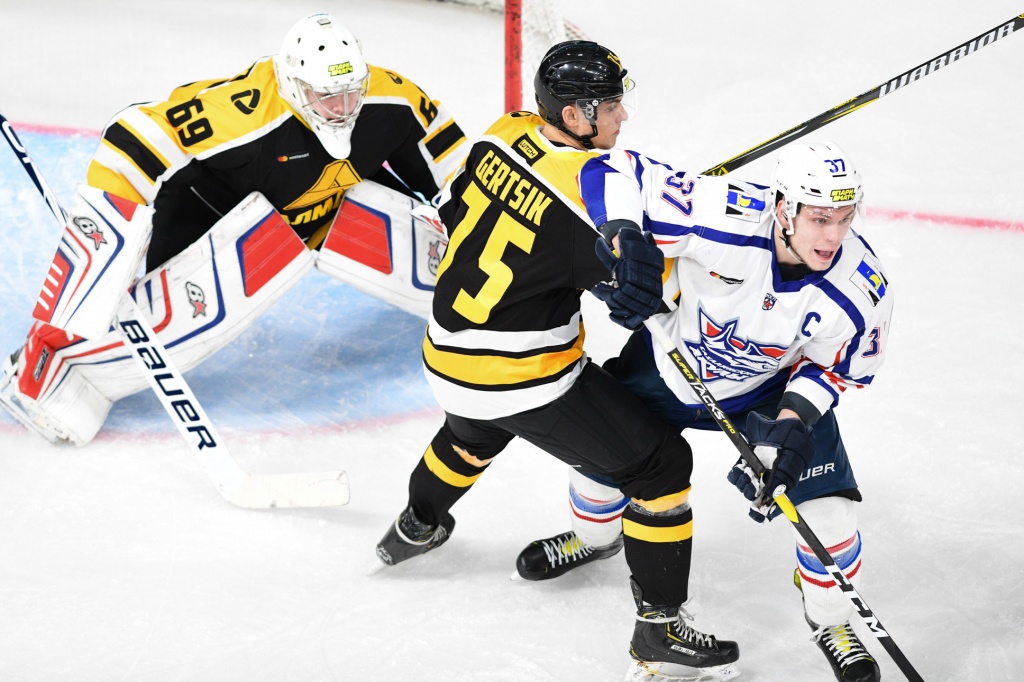 Yuzhno-Sakhalinsk spent almost no time in the offensive territory in the opening period of play. Denis Rybalkin had to make just five saves and he had no trouble doing that. As for Almaz Cherepovets, they got on the board seven minutes in- Alexei Lapin got the tally.

Cherepovets were shorthanded early in the second frame. Sakhalinskie Akuly couldn’t convert on either of three consecutive power play attempts but Ruslan Akhmetvaliev tied it up just after Almaz went back to playing full-strength. The parity lasted less than two minutes. Shortly before the intermission Nikita Lukhovskoy put the home team back in the lead.

The ‘Sharks’ had a 2-man advantage for 70 seconds in the third frame but once again Almaz came out on top. Late in the game the visitors also ran into a penalty problem. Goaltender Grigory Kolupayev got a minor with 20 seconds on the clock and that prevented Sakhalinskie Akuly from going for one final push. Sergei Bazhukhin called timeout but the visitors didn’t have enough time even to exit the defensive zone. Almaz take it 2-1 and win their third consecutive game. 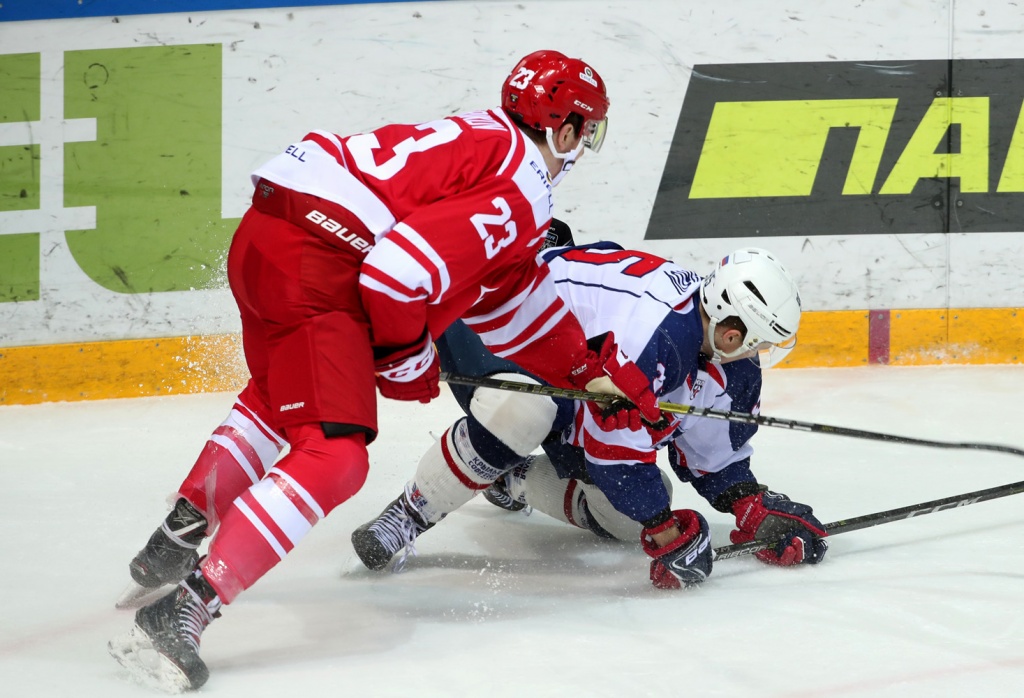 The gameday kicked off at MSK CSKA where JHC Spartak faced off against their Moscow rivals Krylia Sovetov. The red-and-white had the momentum on their side in the opening period along with two power play opportunities and yet failed to get on the board. They had to pay for it late in the second stanza as with just over a minute until the intermission Yegor Zudilov solved Dmitry Kulikov.

Spartak got back even early in the third frame as they finally managed to capitalize on a man-advantage – Kirill Tagirov got the tally. The game was about to go to overtime but Pavel Zubchinsky had other plans. In the final second of regulation the forward scored the game-winning goal for Krylia Sovetov, who enjoyed their 2nd consecutive success.

Notably, this is the first away win over Spartak for Krylia Sovetov since 2009. 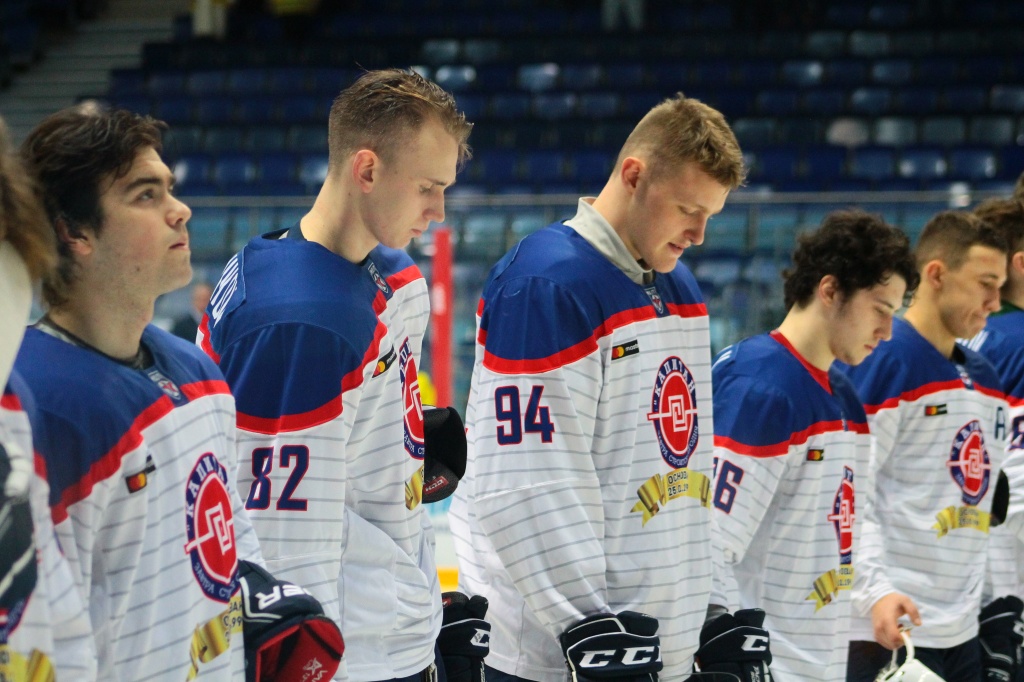 The gameday ended with a Moscow Region rivalry game. Atlant kicked off their home stand in Mytischi with a game against HC Kapitan Stupino.

Home team established a comfortable lead in the opening period of play. Just nine seconds into the game Grigory Nesvetayev put Atlant on the board and then Dmitry Zvyagintsev scored twice on Artyom Pleshkov. Stupino did better in the second period. 90 seconds after the initial face-off of the frame Kapitan’s top-scorer Amir Garayev shortened the gap for Stupino, while Daniil Tyutychev got a shorthanded marker midway through the stanza to make it a 1-goal hockey game. However, Andrei Lunev’s men managed to get a solid win in this one. Daniel Usmanov got a tally before the intermission forcing Kapitan to swap Pleshkov for Leonid Sklyar. Zvyagintsev completed his first career JHL hat-trick late in regulation to set the final score. Atlant are now a stone’s throw away from SKA-Varyagi in Western Conference standings. Kapitan lose their 5th game straight.

After greeting the fans with chants following the win Atlant players invited their moms to the ice and offered them bouquets as part of Mother’s Day celebration.


Avto get even with Stalnye Lisy, Romanov posts a shutout 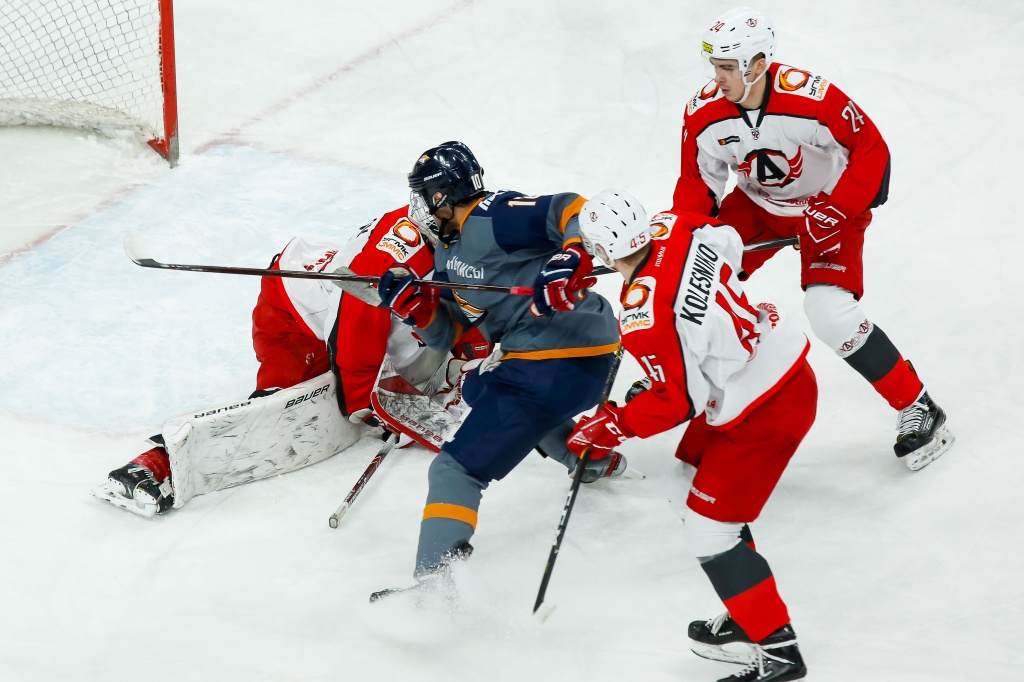 Stalnye Lisy Magnitogorsk played hosts to Avto Yekaterinburg. The day before ‘Steel Foxes’ managed to win a hard-fought game but this time around the visitors did better defensively. Seven minutes into the 1st period Konstantin Suslov opened up the scoring as netminder Nikolai Shashkov couldn’t slide across in time. Late in the period home team goaltender had more to do but he couldn’t bail his team out as they got two consecutive penalties.

Sergei Kolesnikov scored Yekaterinburg’s 2nd goal of the game with a mighty clapper on the far side. The score remained unchanged in the third stanza. The visitors could score another one in the final minute of regulation but Timur Khairullin helped his goaltender out. Georgy Romanov was selected as the first star of the game with 41 saves. Avto win 2-0 on the road. 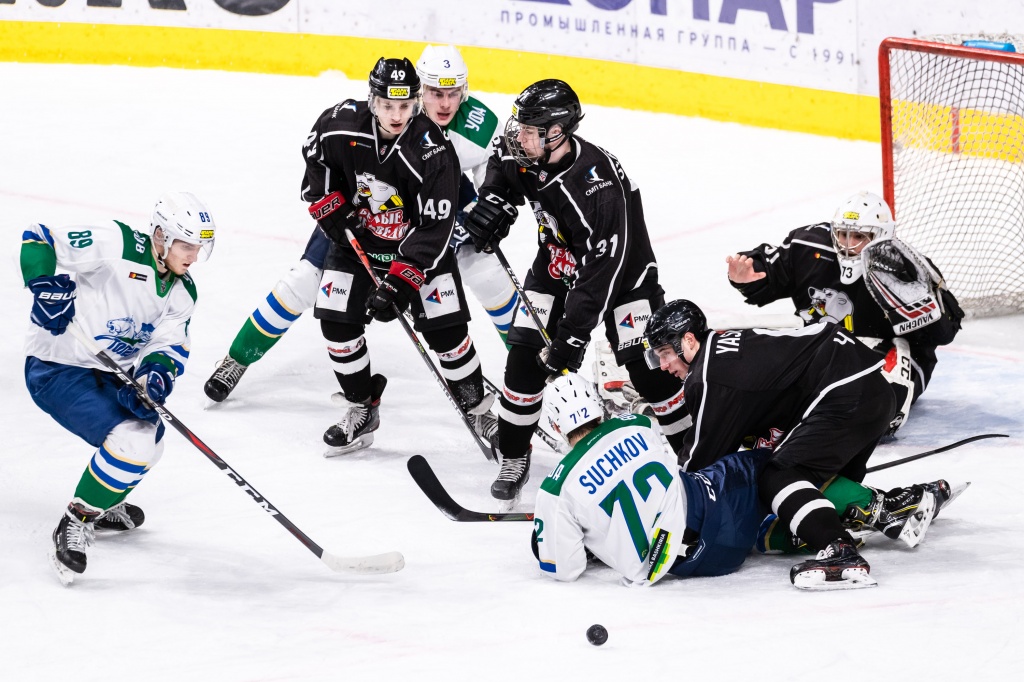 Tolpar Ufa remained in Chelyabinsk. The visitors managed to get a quick goal – four minutes into the game Danil Bashkirov poked the puck into the net on a rebound off Pavel Semyonov’s shot. Tolpar looked a better team but late in the frame goaltender Dmitry Braginsky shook the perception as he got a minor for tripping. Belye Medvedi could even it up in the second period but Ildan Gazimov’s unsportsmanlike minor brought no goals.

The visitors scored two in a row in the third stanza. Alexei Pustozyorov improved the lead for Tolpar and in the very next shift Mikhail Kozlov one-timed it home from the slot. ‘Polar Bears’ never recovered from this knockdown. Braginsky stopped all 24 shots he had to face for a shutout. Tolpar win 3-0. 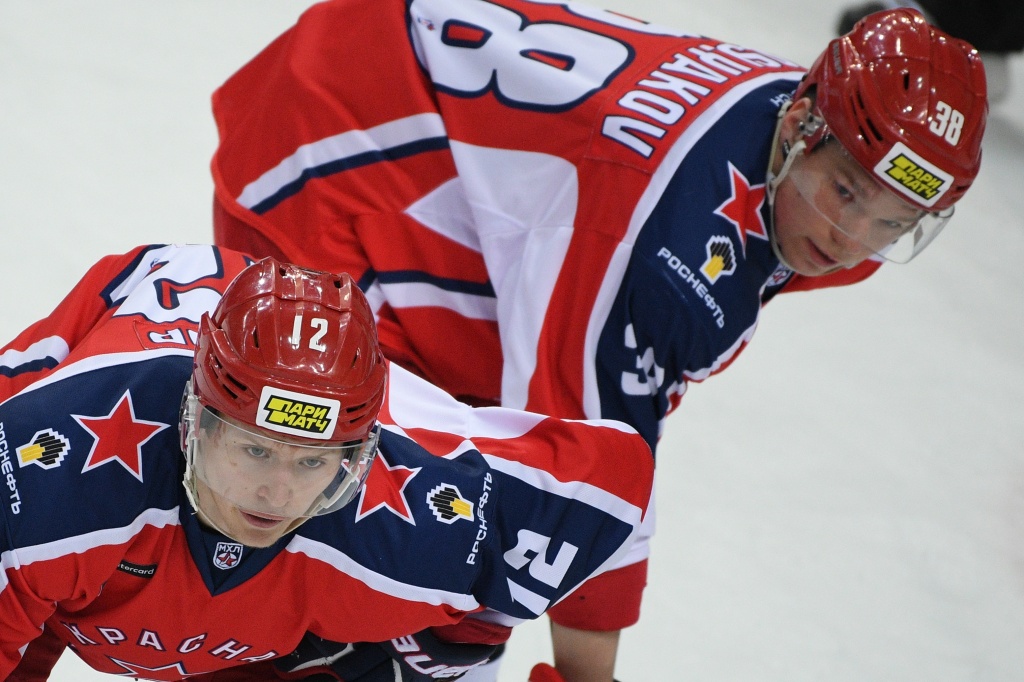 The teams opted for slow-paced hockey throughout the game and the affair turned out to be rather calm. Home team had the momentum on their side. Even when they were shorthanded, Krasnaya Armiya Moscow peppered Daniil Chechelev with shots. Vsevolod Skotnikov had almost no work – Russkie Vityazi took a total of just 17 shots in the game.

It seemed that the opening period of play wasn’t going to feature any goals but with 30 seconds on the clock Krasnaya Armiya put together a quick transition play. Chechelev parried Nikita Dolgopyatov’s shot but couldn’t stop Yegor Korbit on the rebound.

The game followed a similar scenario in the next 40 minutes – the teams continued to play slow-paced hockey and at times Moscow managed to create a scoring chance. With 10 minutes left in regulation Dolgopyatov doubled the lead for Krasnaya Armiya but it still was a nail-biter. Nikita Goncharov solved Skotnikov with just over two minutes remaining on the clock to put Russkie Vityazi back to within one.


Chayka erase a 2-goal deficit late in the game, lose in the shootout 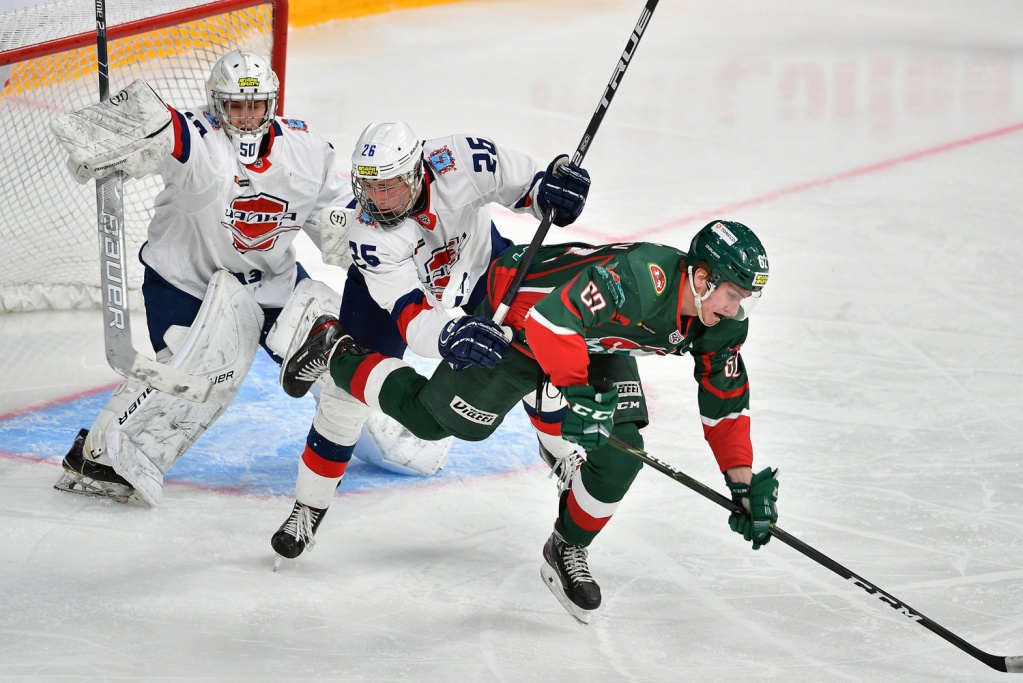 Home team got off to a decent start. Less than two minutes since puckdrop Denis Komkov solved Dmitry Menshatov – the forward stole the puck, beat the only remaining defenseman and fired it home. Midway through the frame Dmitry Katelevsky doubled the lead for Kazan - Chayka netminder couldn’t cope with a deflection.

Despite an exciting start and seesaw kind of game, those tow goals remained the only ones on the board up until late in regulation. The visitors had the momentum in the third stanza but Chayka couldn’t convert it into goals for a long time. Irbis finally cracked with two minutes on the clock – Danila Platonov capitalized on a power play to put it past Artur Akhtyamov. Ivan Shulga took a hard shot from the blue line but the puck got stuck in traffic in front of the net – Platonov was first to it and buried it. Nizhny Novgorod brought it back to even just 30 seconds later – Akhtyamov couldn’t stop Gleb Petrov on the rebound from open ice.

The game went on to overtime. Once again Nizhny Novgorod had the momentum. Late into the extra period of play Chayka got a man-advantage but couldn’t convert on it. Kazan won it in the shootout. Akhtyamov allowed just one goal while Irbis skaters capitalized on two attempts. Irbis win their 4th consecutive game and rise to 4th place in the Eastern Conference standings. 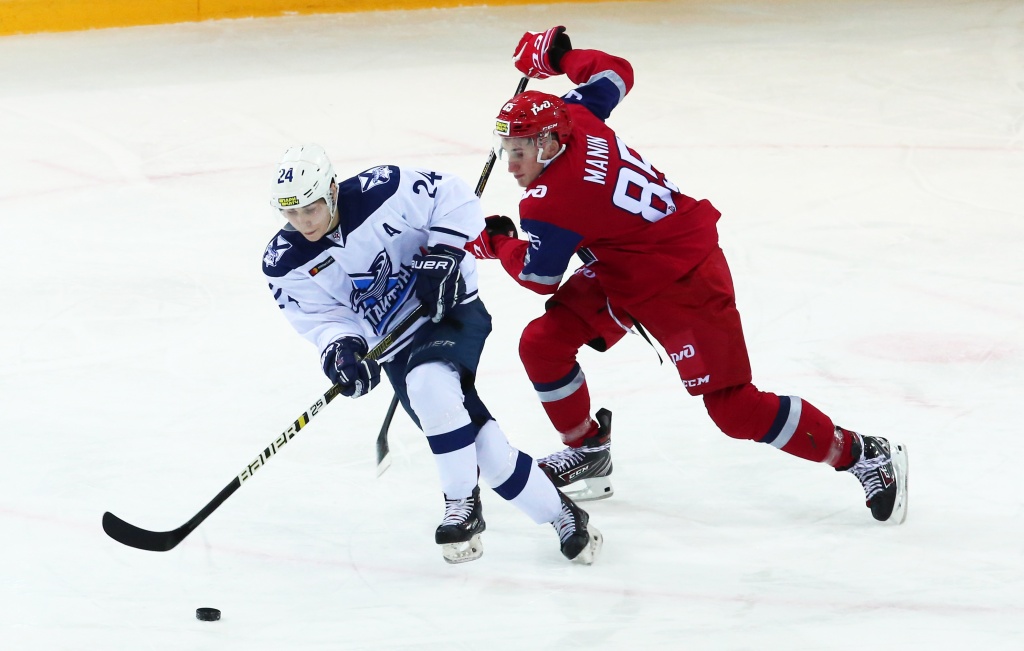 Loko Yaroslavl began their series of home games with a game against Taifun Primorie Region. Vladivostok team is at the bottom half of the Western Conference and that’s why Yaroslavl head-coach Igor Melyakov went for some roster changes. For example, the Nazarov brothers, who were recently called up from Loko-Yunior, were put on the 4th line.

Home team scored a quick goal in the game – Maxim Denezhkin one-timed it into the back of the net off Alexander Daryin’s assist past Yegor Sinegubkin. Next goal came exactly 20 minutes of play later – this time the visitors found their target. Ilya Ovechkin made Denezhkin pay for the mistake he made behind the net and tapped home Alexander Sychushkin’s pass for the tie.

Nevertheless, the parity was short-lived. Just four minutes later Taifun collapsed defensively on a power play. Maxim Beryozkin sprung for a breakaway, scored on Sinegubkin and put Loko back in the lead. At times Primorie Region outplayed reigning champions and managed to get back even before the intermission – Kirill Basov put it on net from the blue line and Vladislav Okoryak let it in.

The teams traded scoring chances in the third period. First Anton Lukichyov, who was celebrating his 150th Junior Hockey League game, hit the bar and with 75 seconds on the clock Taifun forward got in on a break but couldn’t beat Okoryak.

It went to overtime and both teams played to win. Midway through it Maxim Beryozkin picked up the puck behind the visitors’ goal and passed it to Ilya Nikolayev, who was left wide open in the middle of the zone. Yaroslavl forward had enough time to properly aim and snipe the top-shelf. ‘Railway men’ win a hard-fought game 3-2 in overtime. 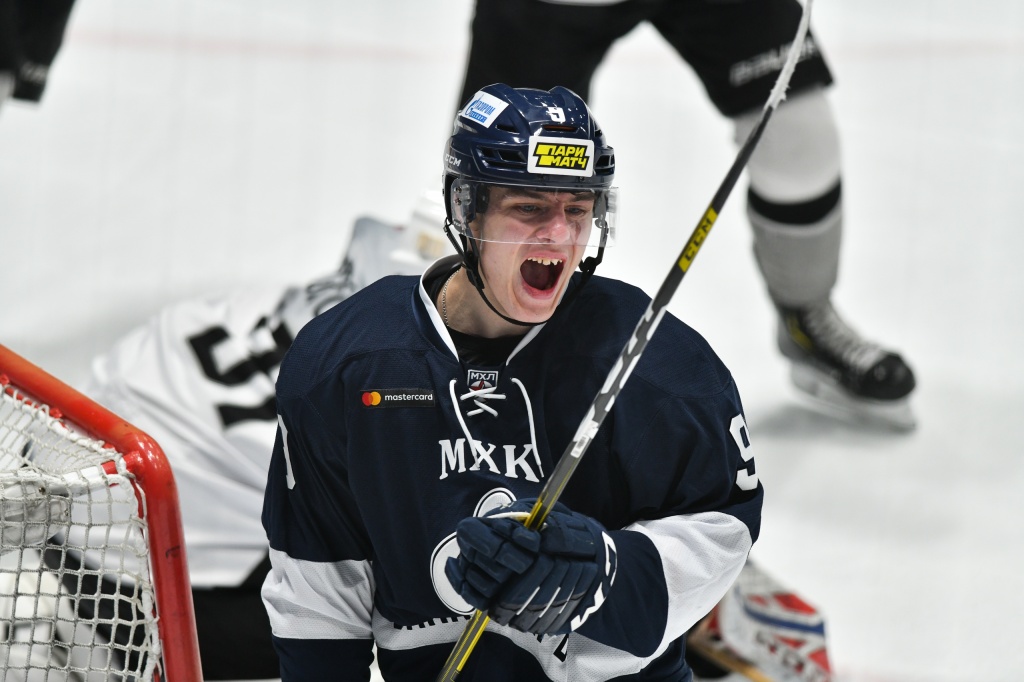 After a blowout loss the day before HK Riga head-coach Raimond Vilkoits decided to opt for another starting goaltender – Bruno Bruveris, who replaced Janis Voris mid-game in the 1st bout, got the nod. Yegor Bashkatov made minor roster adjustments – Maxim Petrov and Ivan Antonovsky were dressed for this one.

Home team came out hard out of the gate. It took St. Petersburg just 44 seconds to open scoring. Pavel Kuznetsov stole the puck at the blue line and pocketed it between the pads of Bruveris with a backhand shot. Three minutes later Semyon Zakharov doubled the lead for Dynamo. Aside from the goals, first period of action also featured a mass brawl, after which eight penalty minutes were assigned.

Riga didn’t do well shorthanded. Dmitry Rashevsky and Alexander Zhabreyev got a power play tally each in the second period, essentially putting it out of reach. Rashevsky scored his second of the game in the third stanza to convert on yet another man-advantage, setting the final score. Makar Chufarov stopped all 18 shots he had to face to earn his 4th shutout of the season.

Riga lose their second game in a row with a margin of five goals, letting Dynamo get really close to them in Western Conference standings. The teams are currently tied for 6th spot, while Dynamo have three games in hand.