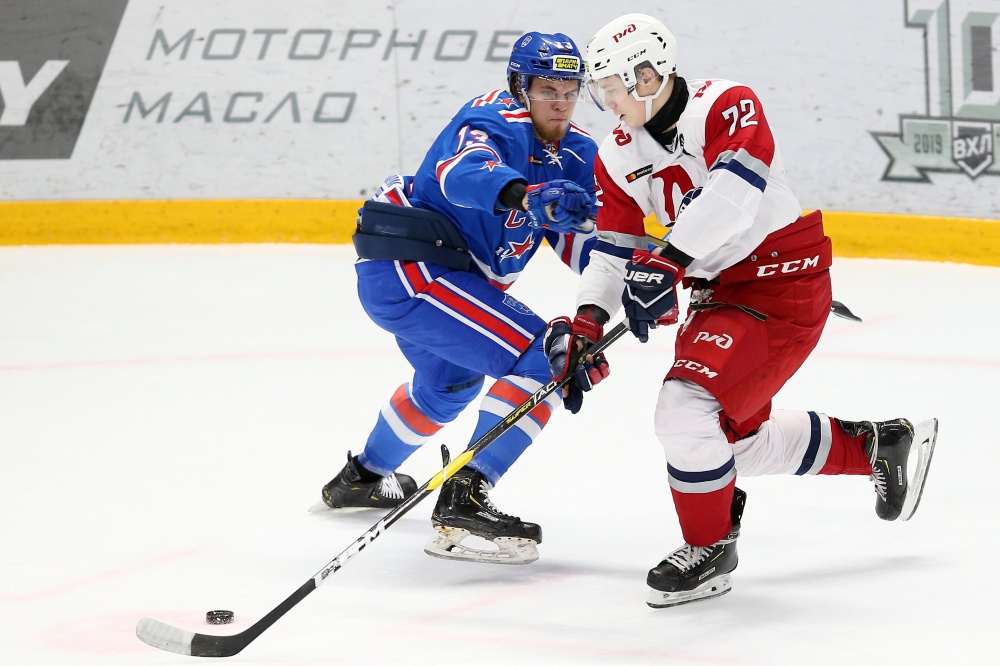 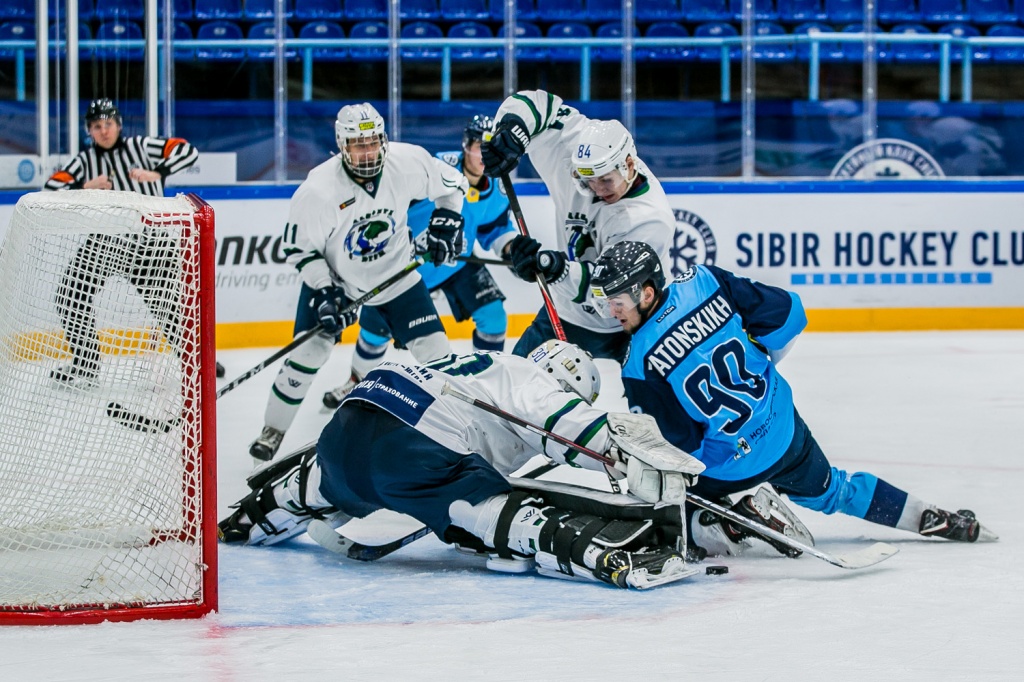 Sibirskie Snaipery once again played hosts to Mamonty Yugry. Home team got a quick goal in this one – Makar Nikishanin found the back of the net just 21 seconds after the opening face-off. Khanty-Mansiysk responded with a tally by Kirill Rudenko, who also had a goal the day before. The ‘Snipers’ did better late in the frame – Dmitry Ovchinnikov and Mikhail Romayev improved Novosibirsk’s lead to two goals.

Timofey Aksyonenko improved it to 4-1 in the third stanza. The ‘Mammoths’ delegated Ilya Stupin to guard the cage after that and Nikita Chusovitin got a goal back. However, Ovchinnikov went on to score his second, setting the final score. Sibirskie Snaipery win 5-2 on home ice.

Reaktor couldn’t catch up to Altay 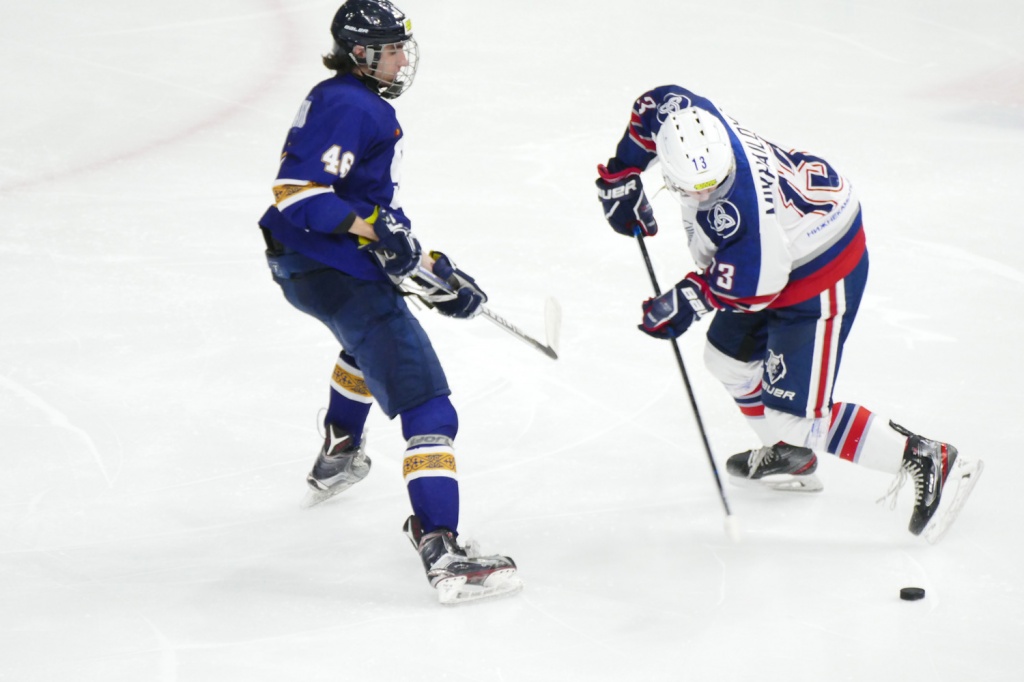 Altay Ust-Kamenogorsk faced Reaktor Nizhnekamsk on home ice and the game turned out to be really high-scoring. Home team won the opening period of action 3-1 as German Shaporev, Konstantin Bondarenko and Nikita Volosenkov got a tally each. Reaktor answered with a goal by Ilya Paranin. He went on to score his second of the game early in the next period but Shaporev got another one himself less than two minutes later. Ivan Podshivalov chipped in a goal of his own late in the frame to improve the lead to 5-2 for Ust-Kamenogorsk.

Soon after that Podshivalov scored his second of the game as well as he buried the rebound on Andrei Lagunov’s shot. The visitors engaged in pursuit and managed to get two goals back as Bulat Shambazov and Andrei Chivilev found their targets. Timofey Barsukov brought the visitors back to within one but Reaktor couldn’t complete the comeback. Stas Petrosyan scored on the empty net late in regulation. Altay win 7-5. 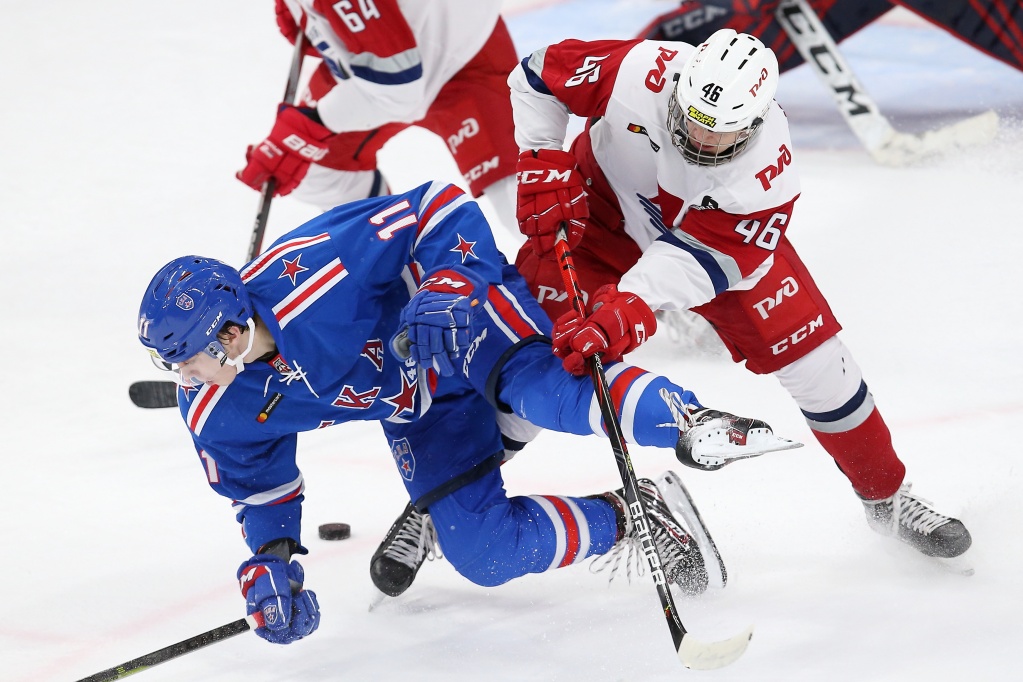 In one of the most anticipated games of the regular season two 2018 finalists went up against each other – SKA-1946 St. Petersburg faced Loko Yaroslavl. First goal of the game came 11 minutes in. The puck bounced off Vladislav Okoryak’s pad straight to the tape of Nikolai Polyakov, who sent it just under the bar. Yaroslavl showed great conversion on their scoring chances in the second period of action. Daniil Gutik brought it back to even, then Anton Lukichyov put the visitors in front with a goal in 4-on-4 situation and Timur Akhunov added a security tally from the slot.

‘Army men’ managed to get back to within one. Six minutes into the third stanza Arslan Yarullin passed it to Ilya Altybarmakyan, who fired it from the right wing, catching Okoryak off-guard. Home team failed to force overtime. They pulled their netminder for the extra-attacker and went for one final push but to no avail. Reigning champions get a 3-2 win in a hard-fought game.

Krylia Sovetov salvage a point but lose to JHC Dynamo St. Petersburg in the shootout 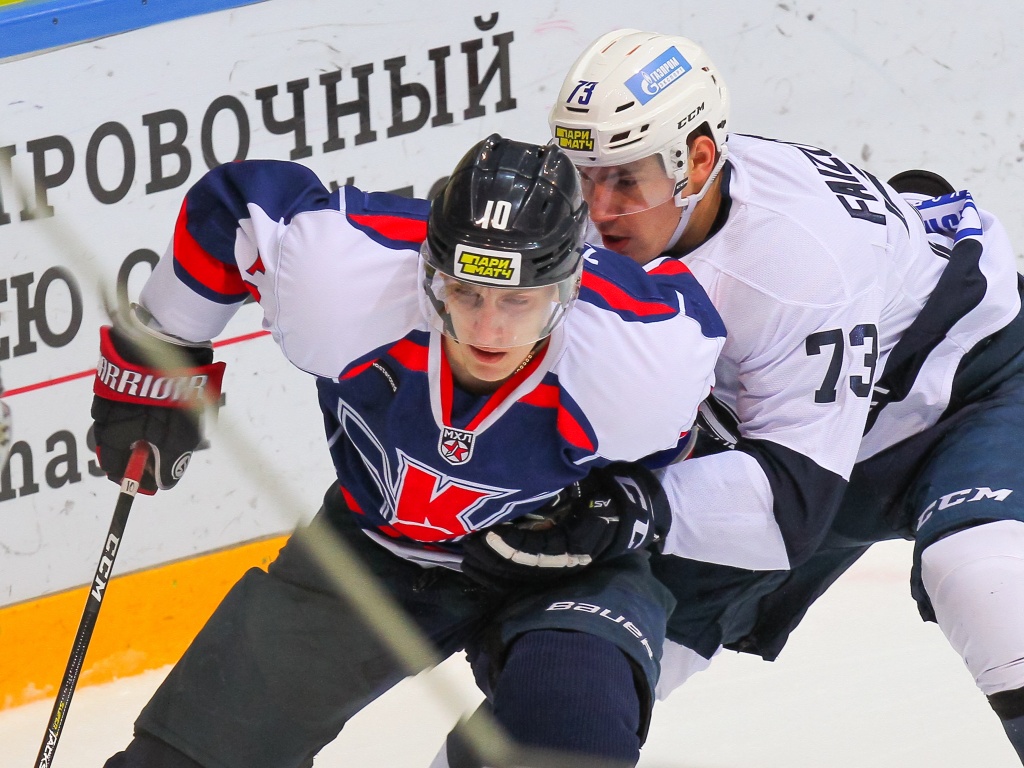 Krylia Sovetov Moscow played hosts to JHC Dynamo St. Petersburg in Setun. The visitors looked slightly better in the opening period of play but managed to get on the board only four minutes into the second. Dmitry Rashevsky sent it past Denis Popov. Dynamo had two power play attempts in the frame but couldn’t improve their lead.

As for the ‘Soviet Wings’, they tied the game up late in regulation and sent it to overtime. Rodion Poroshin netted one in the final two minutes to convert on a man-advantage. Extra period of play solved nothing and Dynamo went on to win it in the shootout. Alexander Zhabreyev scored the winner. 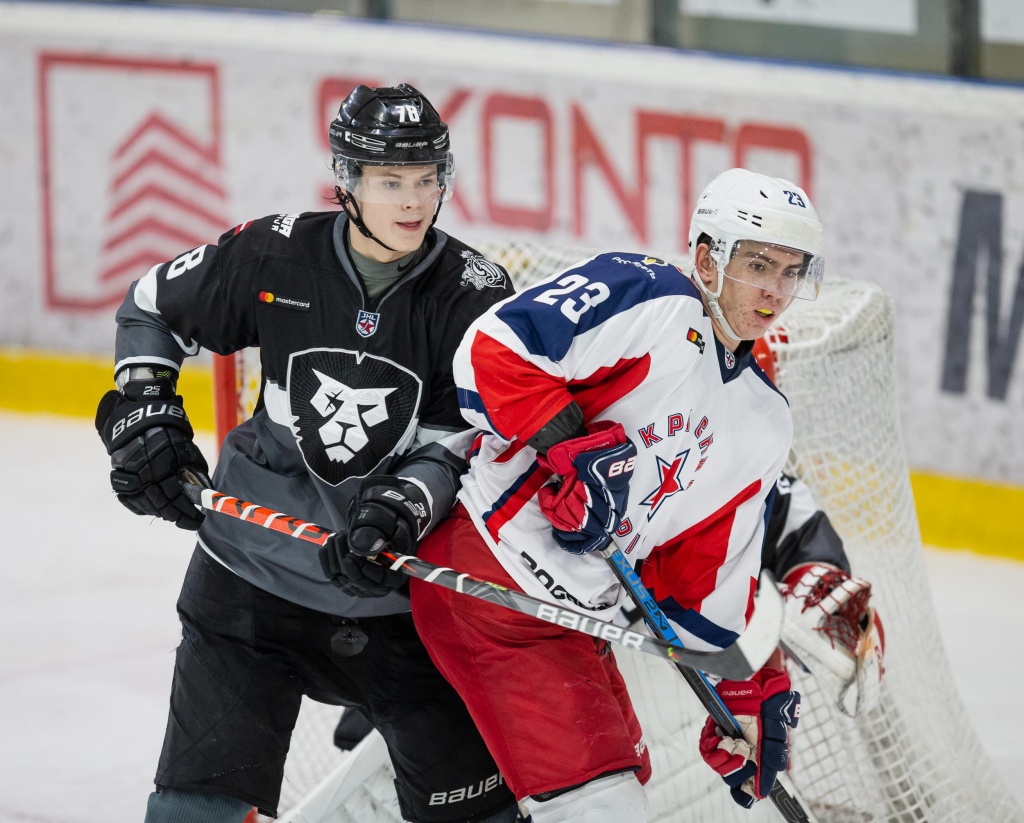 Last game of the day was held in Pinki, Latvia where HK Riga played hosts to Krasnaya Armiya Moscow. Home side got on the board with a tally by Miks Tumanovs, while the red-and-blue saw markers from Sergei Sulev and Alexander Chernov. The teams exchanged goals in the second period as well. Ernests Osenieks brought it back to even, Yegor Korbit put Moscow back in the lead in the very next shift Antons Trastasenkovs once again leveled it on the scoreboard. Just 27 seconds later Sulev netted his second of the game.

The teams headed to the dressing-rooms tied 4-4 after 40 minutes of play. Eventful second period ended with Janis Svanenbergs’ tally. Third period featured no goals and Krasnaya Armiya went on to win the extra point in overtime. Daniil Anop scored the winner. Moscow take it 5-4 on the road. 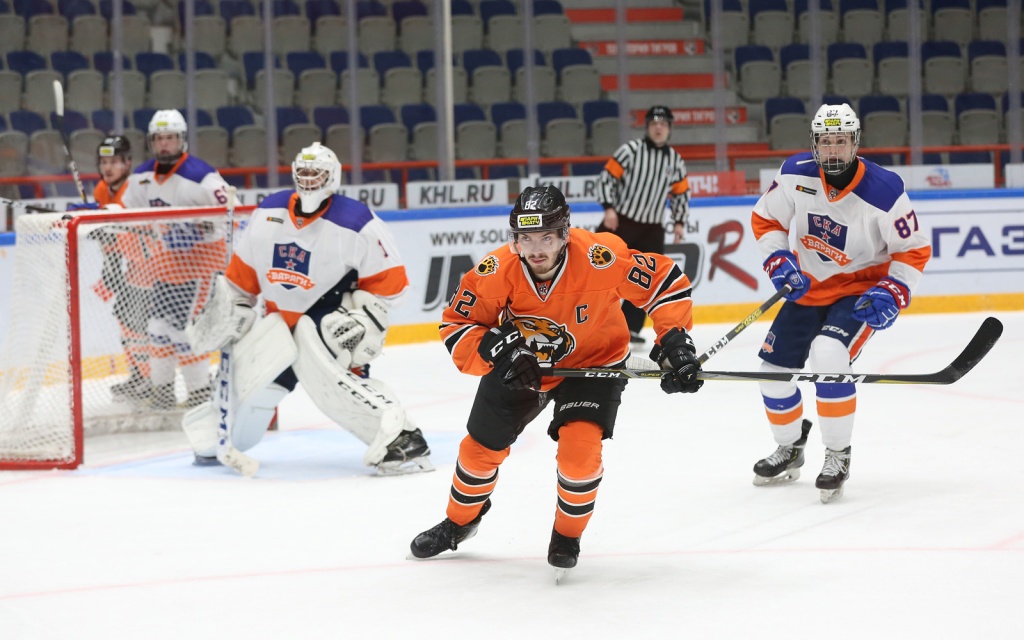 The gameday kicked off in Khabarovsk where Amurskie Tigry ended their 3-game losing streak as they beat SKA-Varyagi in a hard-fought game. Khabarovsk had to come back from behind to do it. The visitors converted on their initial power play attempt of the game as Evgeny Sapelnikov found the back of the net. Home team responded soon enough and got in the lead midway through the frame – Evgeny Babushkin and Sergei Ivanov got a tally each. Late in the period Babushkin scored his second and the teams headed to the dressing-rooms with ‘Tigers’ leading 3-1.