Sputnik
News
Yaroslav Likhachyov – Most Valuable Player, Khasanov – Best Coach. 2021/2022 MHL award-winners
Maxim Krovyakov – 2021/2022 Playoffs Most Valuable Player
SKA-1946 win first championship in their history! Michkov scores game winning lacrosse-style goal
Krasnaya Armiya vs SKA-1946 in the finals! JHL deciding games schedule
“I’ll try to make it to the senior team.” Yaroslav Likhachyov finished his JHL career with a team’s record
The talent of the CSKA system rocks in the JHL playoffs. Agatha Christie helps Prokhor Poltapov prepare for games
“It’s a shame that three years in the JHL flew by so fast” – Matvei Kokovin lost a bet to Alexei Shevchenko as the White Bears failed to qualify to the playoffs
“I gave myself a choice: either to get stronger and move on, or to quit hockey” – SKA-1946’s leader talks about his season, social media, and hockey life
Share 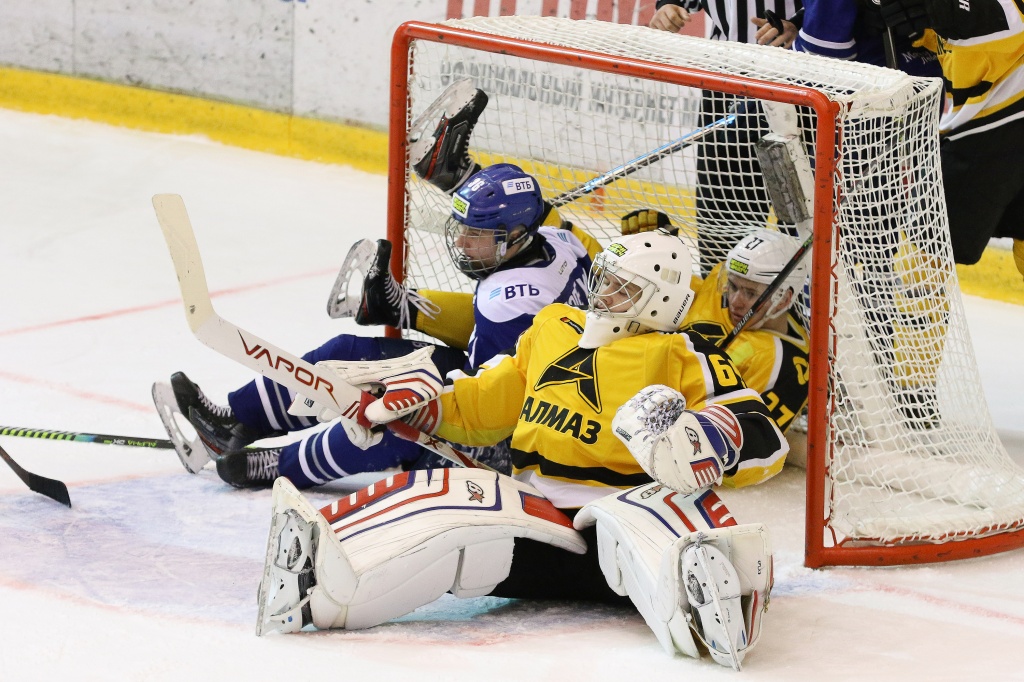 In the final game of the day JHC Dynamo Moscow faced Almaz Cherepovets, who recently suffered two blowout losses from the top team of the Western Conference. SKA-1946 St. Petersburg. The visitors did their best to make up for that and opened scoring seven minutes in – Yegor Chizhikov found the back of the net. Not only Dynamo managed to get back even before the intermission, they also grabbed the lead – Daniil Lazutin and Yegor Smirnov got a tally each.

Cherepovets brought it back to square one only in the final five minutes of the second period. Vladislav Gertsik leveled it on the scoreboard and the teams went to the dressing-room for the second intermission tied 1-1. Key moment of the game came late in regulation. Vyacheslav Shmakov got a minor for tripping, which proved to be crucial. Just 22 seconds into the ensuing power play Nikita Lukhovsky scored the winner for the visitors. Almaz win 3-2 on the road.

Sputnik get even in Nur-Sultan 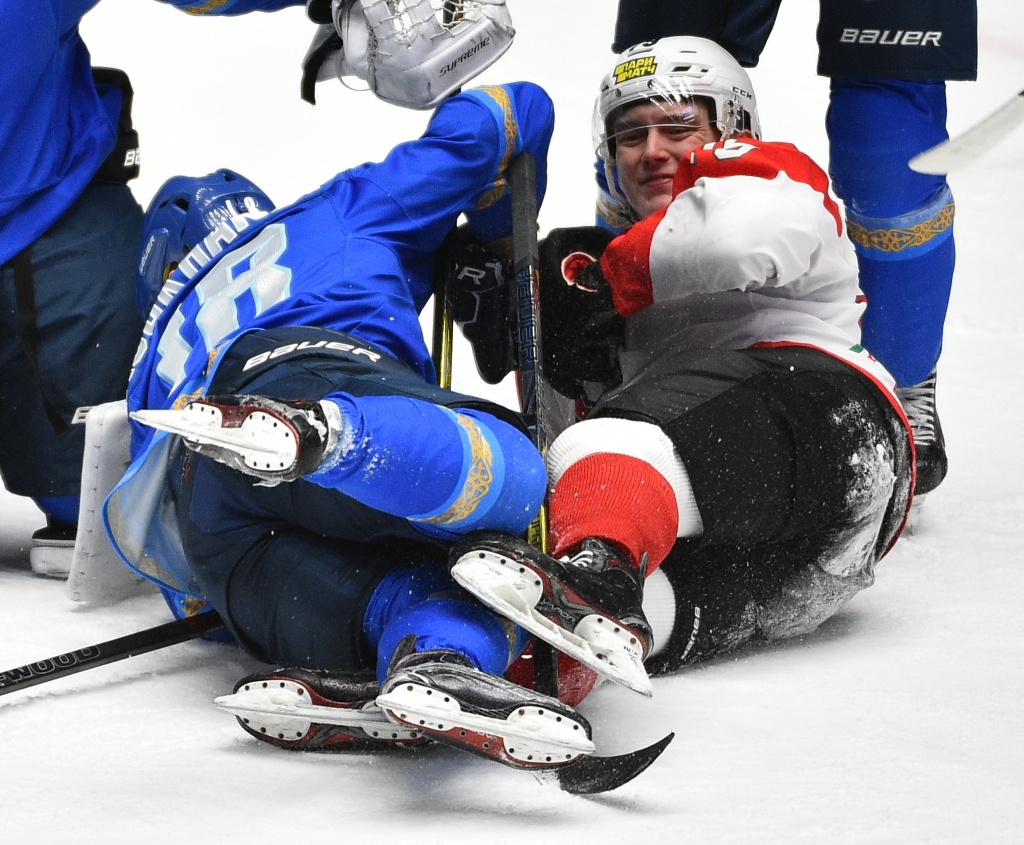 Sputnik Almetyevsk played their second consecutive game in Nur-Sultan, Kazakhstan. The visitors managed to get their revenge after a shootout loss the day before. First penalty of the game came 13 minutes in – Alikhan Omirbekov got a minor for tripping. Almetyevsk capitalized on the ensuing power play – Daniil Melnikov sent it past Roman Kalmykov. One of Sputnik’s top players Andrei Sholgin improved the lead for his team in the second frame.

Snezhnye Barsy began the third stanza shorthanded following a brawl late in the second. Home side survived it and converted on the next man advantage they got in the game. However, Oleg Boiko’s marker didn’t change much. Sputnik focused on defense and smartly worked the clock to a 2-1 win on the road. 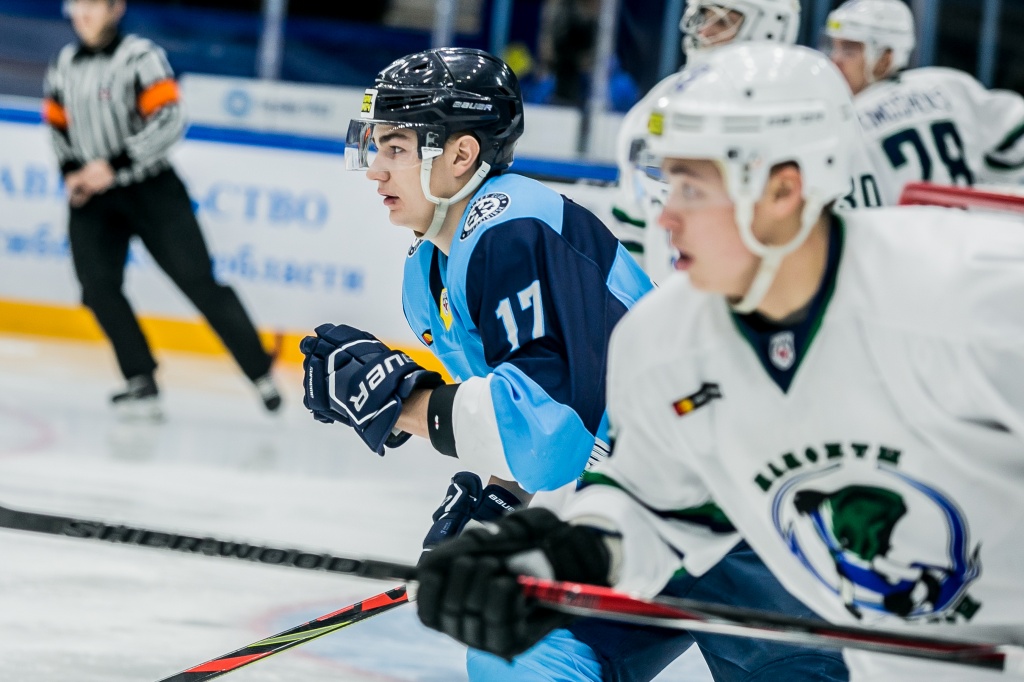 Sibirskie Snaipery played hosts at Sibir Ice Palace to Mamonty Yugry. Home team couldn’t capitalize on their initial power play opportunity of the game but just as Kirill Rudenko stepped back onto the ice, Vladimir Oparko opened scoring off a great pass by Timofey Aksyonenko. The ‘Mammoths’ got back even early in the second period of action – Matvey Voronin beat Vladislav Shcherbakov. Aksyonenko and Oparko got two consecutive minors and Khanty-Mansiysk got in the lead as Rudenko found the back of the net.

Novosibirsk were spending a lot of time in the offensive end in the third stanza but couldn’t turn things around. Evgeny Timoshenko scored on the empty net late in regulation to seal the deal. Mamonty Yugry win 3-1 on the road for their fourth consecutive success as they continue rising in the standings. 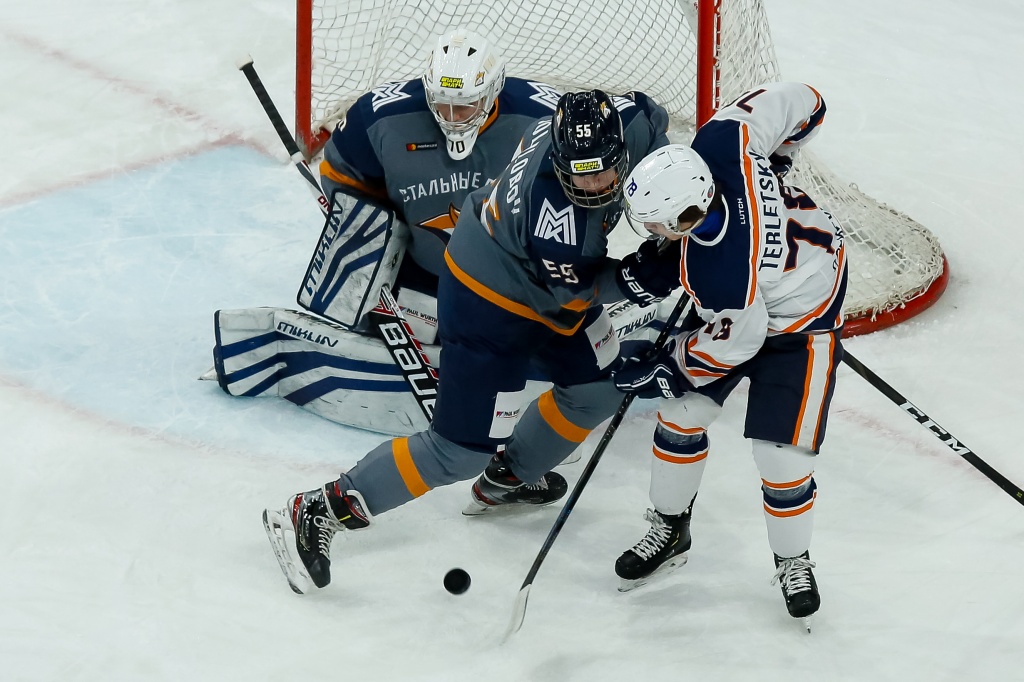 Sarmaty Orenburg, who beat Stalnye Lisy Magnitogorsk by a large margin in the first game of the back-to-back series, were set on repeating that success. They opened up the scoring 13 minutes in – Nikolai Petrov bubbled the net with a wrist-shot from the blue line. Magnitogorsk responded six minutes into the second period. Alexei Sakharov was first on the rebound after a hard shot by Dmitry Sheshin.

Midway through the third period of play Orenburg scored twice. First Nikita Kozhevnikov capitalized on a power play attempt and then Ilya Dragun wired it home with a laser beam of a shot. Just as Yegor Martynov got a goal back for Stalnye Lisy, Sarmaty quickly restored the comfortable margin with a tally by Maxim Makhrin. Home team never recovered from that. Sarmaty win 4-2 for their second success in a row in Magnitogorsk. 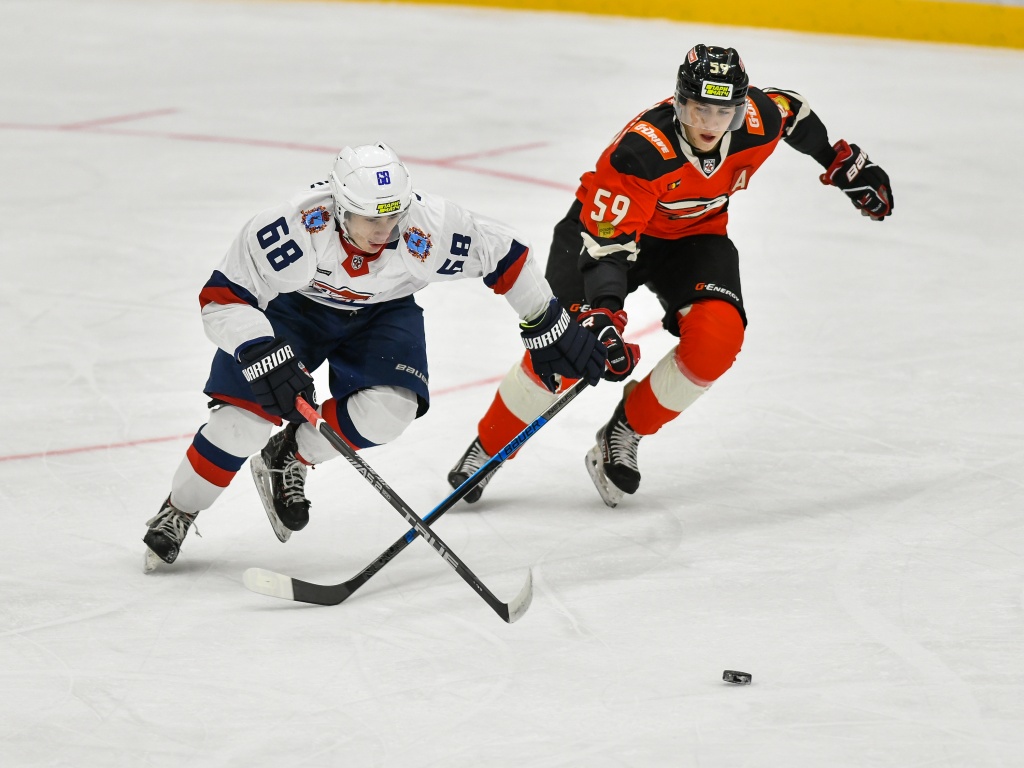 Omskie Yastreby once again went up against Chayka Nizhny Novgorod. Home team looked a better team in the opening period of play but first goal was scored only six minutes into second. German Poddubny beat Georgy Dubrovsky. Nizhny Novgorod killed off a penalty and scored another one – this time Maxim Tsybin found his target. With eight seconds on the clock Andrei Zheludkov converted on a power play to make it 3-0 after 40 minutes of action.

Early in the third stanza Arseny Gritsyuk finally solved Yegor Gromovik but the ‘Hawks’ couldn’t pull off a comeback. Andrei Nikonov made it 4-1 with seven minutes remaining to play in regulation. Soon after that Alexander Yaremchuk scored another one for Omskie Yastreby but that was all they could get. Nizhny Novgorod celebrate a 4-2 win on the road. 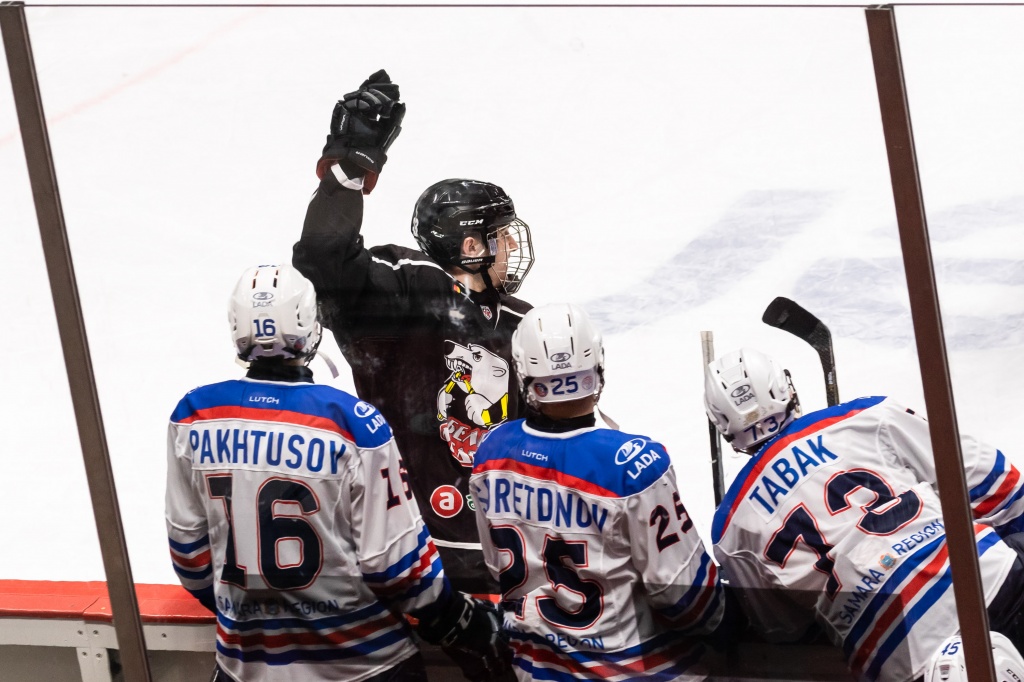 Ladiya Togliatti visited Belye Medvedi in Chelyabinsk. ‘Polar Bears’ got a string of penalties early in the game and had to pay for it – Stepan Steshenko sniped one top-shelf on the far side on one of the power play attempts. Home team got back even four minutes later – Stepan Myslyayev made it a 1-1 hockey game, while Yegor Stepanov picked up an assist on the play. Nothing changed on the scoreboard in the second frame, even though Chelyabinsk took twice as many shots as the opposition.

Home team had the momentum on their side as well in the third period but Ilya Gorbunov made several huge saves for Togliatti. The game went to overtime but had to be decided in the shootout. Belye Medvedi went on to get the extra point as Alexander Abramov scored the shootout winner. 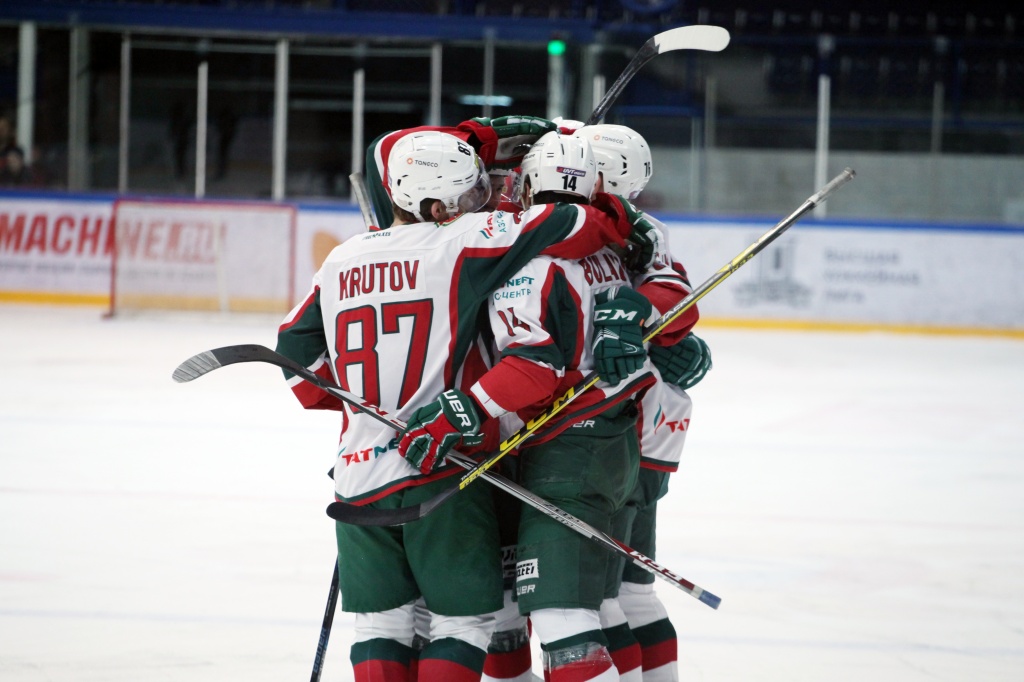 Tyumensky Legion faced Irbis Kazan on home ice. Kazan came out hard for the game and opened up the scoring – Adel Bulatov got in on a break with Alexei Shchetilin and beat him. The ‘Legion’ evened up on the shot-clock in the second frame but Tatarstan team still looked a better team. Home team put together several neat passing plays on a man-advantage but couldn’t convert on either of them.

Although, when Tyumen’s top-scorer Alexander Golovin was sent to the bench, Irbis improved their lead. Dmitry Kotlyarevsky fired it top-shelf past Shchetilin. As a result, Kazan win 2-0 on the road, while Artur Akhtyamov posts a shutout with 22 saves.


Russkie Vityazi score a buzzer-beater, edge Kapitan in the shootout 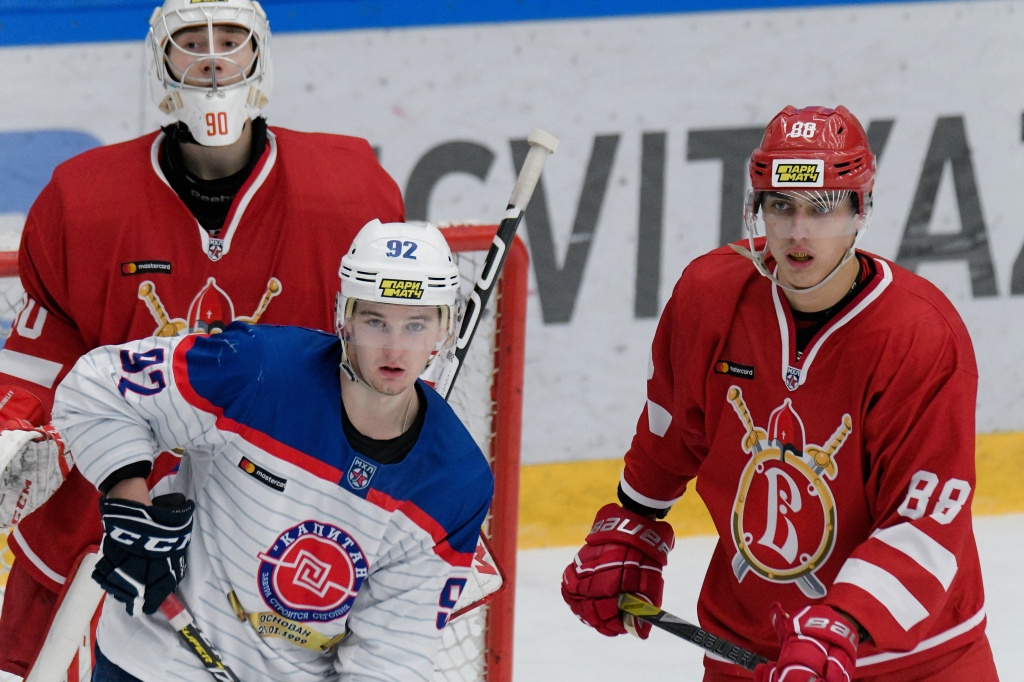 In the first of two Western Conference matchups Russkie Vityazi took on their Moscow Region rivals HC Kapitan Stupino. The teams were feeling each other out early in the first period. A mass brawl broke out shortly before the intermission and over an hour in penalty minutes was assigned in the opening frame. Stupino went on to get the first goal of the game – Danila Filippov found his target.

Russkie Vityazi got the equalizer early in the second period as they converted on Amir Garayev’s penalty. Nikolai Smirnov made it a 1-1 hockey game. Garayev made up for that early in the third stanza as he gave the visitors their second lead of the game. Nevertheless, Kapitan failed to protect it again. In the last minute of regulation Yaroslav Busygin sent the game to overtime, which led to nothing. Daniil Baklastov won it in the shootout for Russkie Vityazi.