SARMATY SOAR PAST STALNYE LISY, SPARTAK GET EVEN IN VLADIVOSTOK. NOVEMBER 17th REVIEW 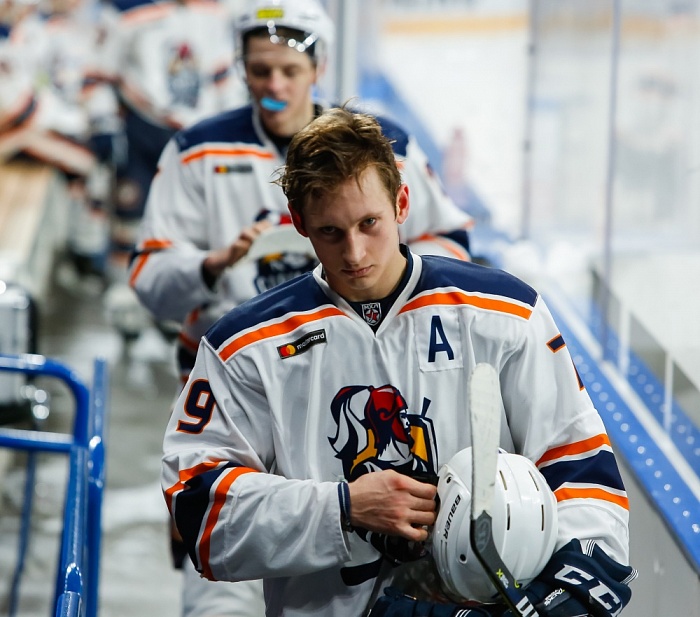 Spartak get even with Taifun 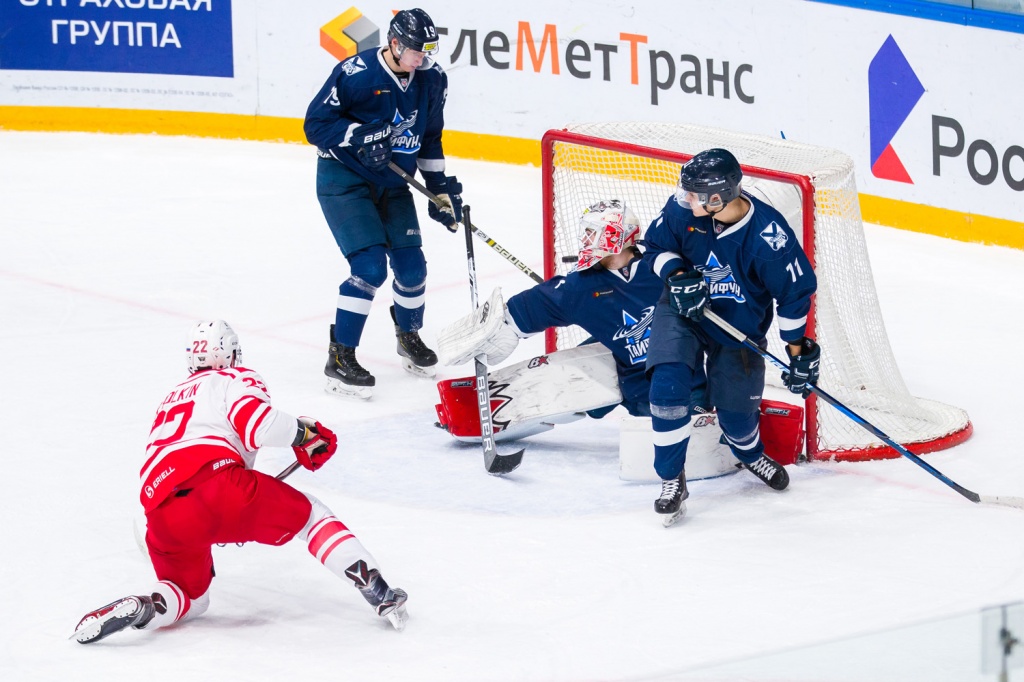 The gameday kicked off at Fetisov-Arena as Taifun Primorie Region played hosts to JHC Spartak Moscow in Vladivostok. The day before the teams combined for just goals with the red-and-white allowing both. Second matchup of the back-to-back series turned out to be a much more high-scoring affair. Spartak won the opening frame 2-1. Alexander Oskin scored a pair, while Ilya Ovechkin got one back for the home side. The teams traded goals in the second frame. Alexei Drobin tied it up and soon after that Ruslan Novruzov put the visitors back in the lead.

Moscow improved it in the third stanza. Oskin completed his hat-trick, while Ignat Kholkin and Yefim Bystrov got a tally each. With 12 seconds on the clock Leonid Pasmanik got another goal for Primorie Region but it didn’t stop Spartak from getting their revenge for the loss the day before as they took it 6-3 on the road. 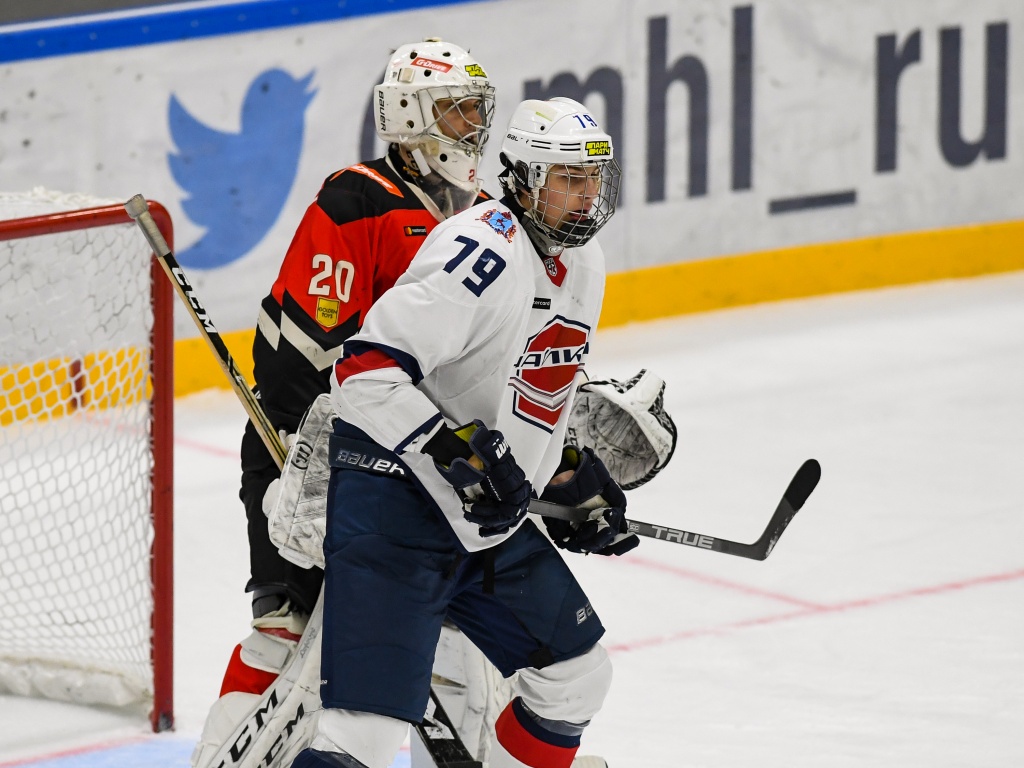 Omskie Yastreby went up against Chayka Nizhny Novgorod on home ice. Nizhny Novgorod outshot the opposition in the opening period of play but allowed a goal in the final second – Pavel Yelizarov found the back of the net. The ‘Hawks’ got a power play opportunity midway through the second frame and Alexander Yaremchuk converted on it. Shortly before the second intermission Nikita Savchenko improved the lead to 3-0.

The visitors almost pulled off a comeback in the third period. First Maxim Tsybin scored a shorthanded goal. Soon after that Chayka got a 2-man advantage and Denis Davydov made it a 1-goal hockey game. Unfortunately for Nizhny Novgorod fans, their favorites couldn’t force overtime. Yaremchuk scored his second of the game to seal the deal. With this 4-2 success on home ice Omskie Yastreby continue to top the Eastern Conference. 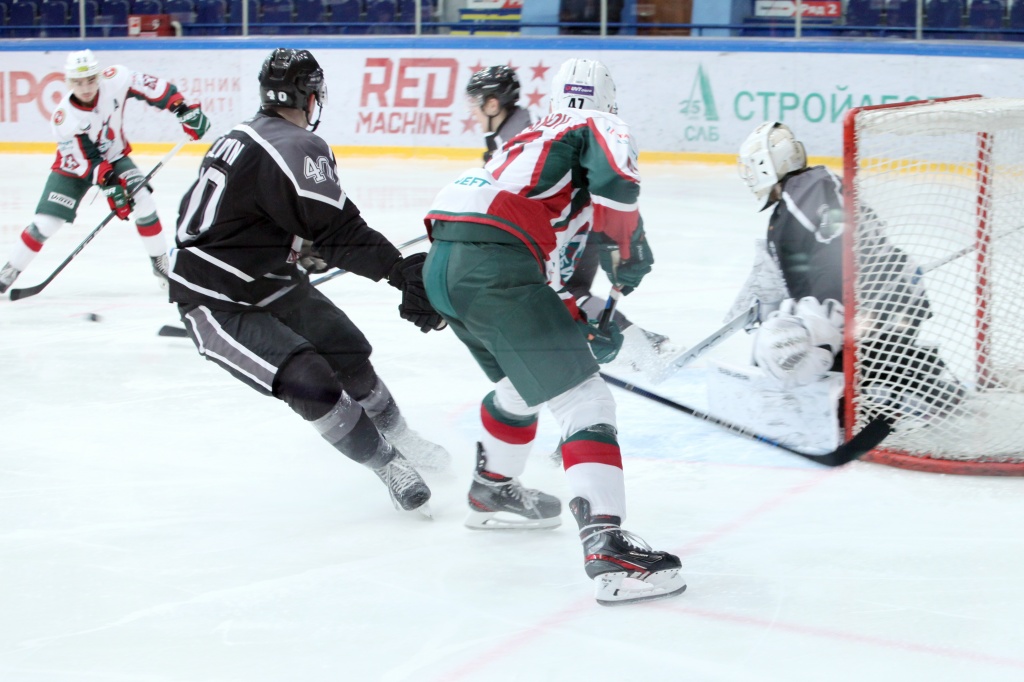 Irbis Kazan visited Tyumen and won a hard-fought game. Seven minutes into the opening period Denis Komkov fired one home just under the bar off assist by Kirill Krutov. Soon after that Roman Poluvytnov skillfully tipped a shot from the slot and the puck slid under the pads of Alexei Shchetilin. The visitors had the momentum on their side in the second frame but failed to find the back of the net. Tyumensky Legion got a goal back as Alexander Golovin dinged one home of the post.

That turned out to be the only goal the ‘Legion’ would score in the game. Seven minutes into the third stanza Krutov restored Kazan’s 2-goal lead and Ilnur Shabanov set the final score at 4-1. Irbis continue their pursuit of the top spot in the Eastern Conference. 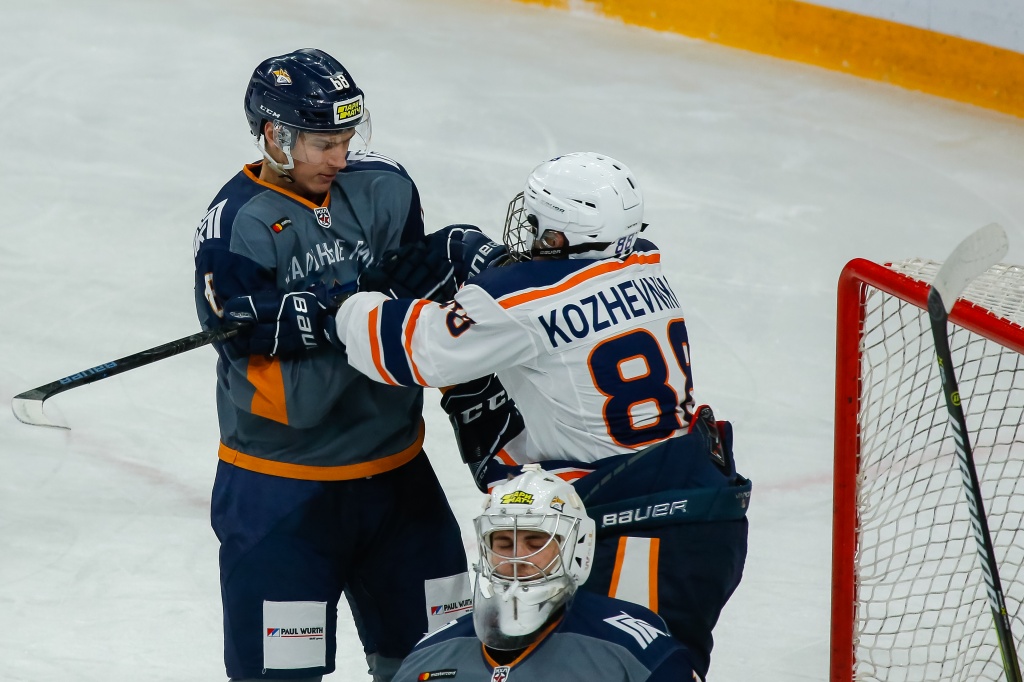 Sarmaty Orenburg, who have been rather hot recently, enjoyed another sensational win. This time they beat the mighty Stalnye Lisy Magnitogorsk. Orenburg scored two goals in the opening period of play. Vladimir Ipatov made it 1-0 as he converted on the initial power play attempt of the game. Late in the period Gleb Pivunov extended that lead by another goal. Sarmaty also enjoyed a great start of the second frame. After Ivan Timashev and Ivan Nazarov got a tally each, Stalnye Lisy coaching staff swapped their netminders. Gleb Moiseyev relieved Nikita Kamyshnikov between the pipes.

The change didn’t faze the visitors and Alexei Barkhatkin scored their fifth goal. Only after Ipatov got his second of the game did Magnitogorsk got their first marker. Dmitry Sheshin broke away and beat Anton Borodkin to capitalize on a power play opportunity. Andrei Oleinikov made it 6-2 but Orenburg still had the last word in this one. Ilya Ignatov set the final score. Sarmaty win 7-2 on the road. 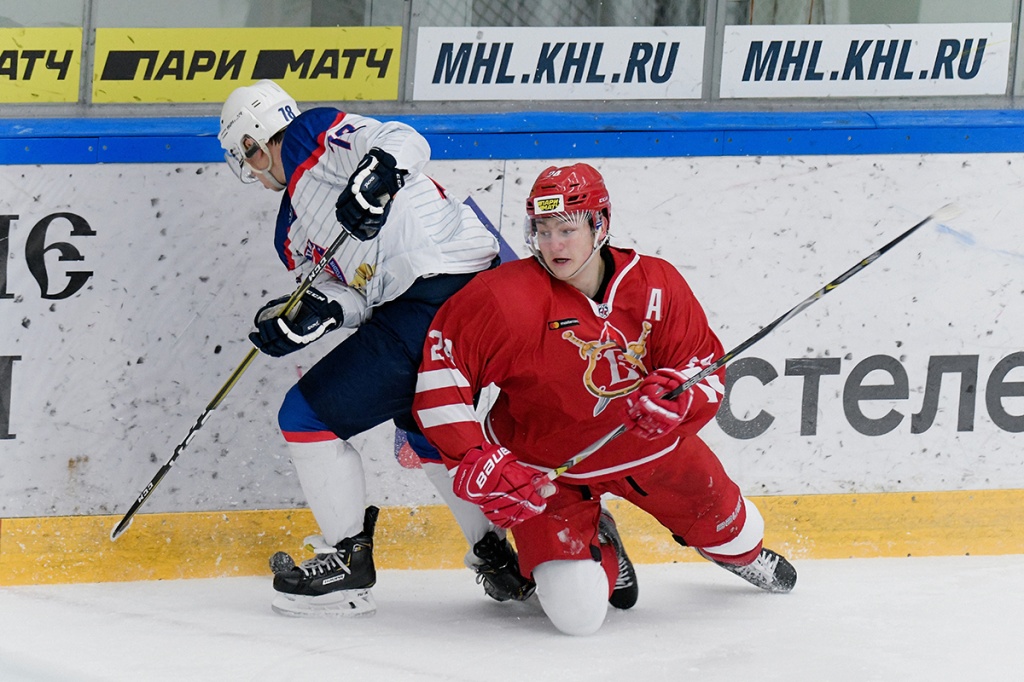 Russkie Vityazi defended the ice against HC Kapitan Stupino. The visitors got the first penalty of the game but managed to kill it off and then opened scoring late in the period as Daniil Pyatkin found the back of the net. Close game with scoring chances at both ends of the ice continued in the second period and it reflected on the scoreboard. Nikita Goncharov and Daniil Baklastov put Russkie Vityazi in the lead but late in the frame Vadim Sivchuk sent the teams to the dressing-rooms for the second intermission tied 2-2.

One of the key moments of the game was captain’s Grigory Khrapsky’s tally, which came eight minutes into the third stanza. Stupino got a minor penalty after that and Ivan Zinchenko set the final score. Moscow Region win 4-2 and are just two points away from the playoff zone now. 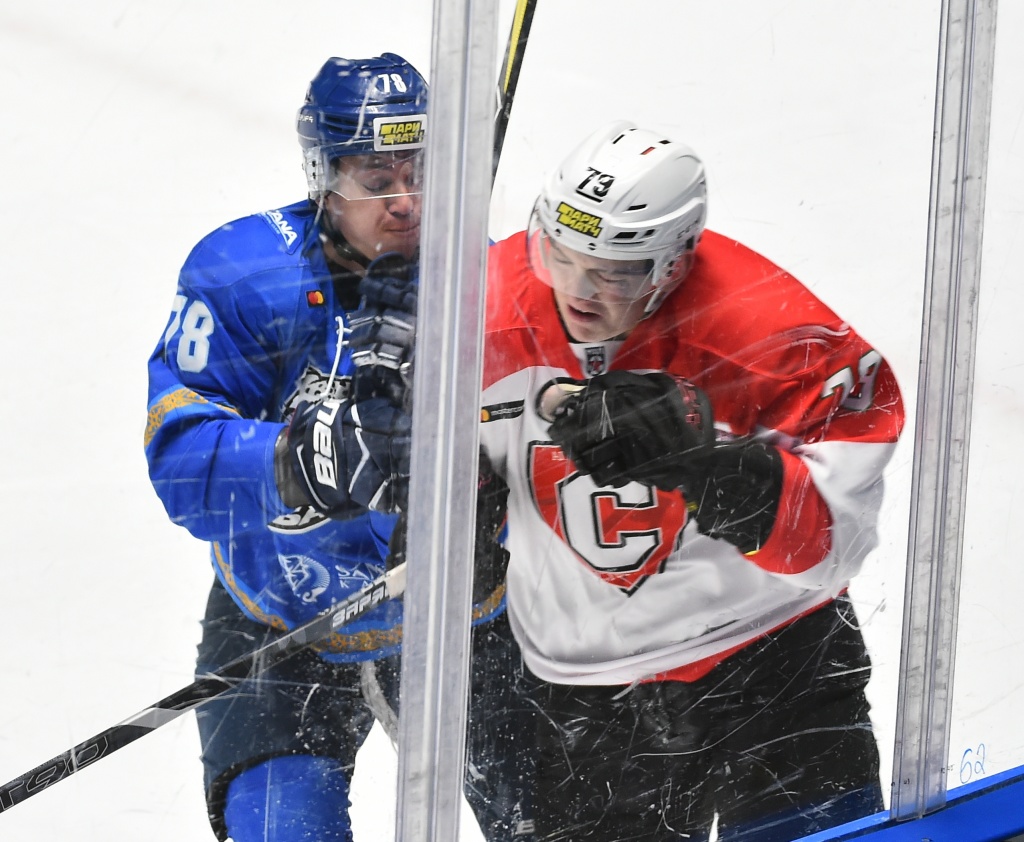 Sputnik Almetyevsk visited Nur-Sultan, Kazakhstan. Both teams had two power play opportunities in the first period of action but the scoring was opened at even strength – Andrei Sholgin put Almetyevsk in the lead 14 minutes in. Home team improved their situation in the second frame. First Snezhnye Barsy top-scorer Dias Guseinov brought it back to even and then Yusup Asukhanov chipped in a tally of his own, while the very same Guseinov drew a helper. After Artur Rezanov got a minor penalty, the visitors scored another goal. Mikhail Fadeyev scored a shorty.

Late in regulation Asukhanov scored his second of the game to give Snezhnye Barsy their second lead of the game. However, Almetyevsk managed to find the equalizer soon enough. Danil Zharov sent the game to overtime. It went all the way to the shootout and Vladislav Saiko scored the winner for Snezhnye Barsy. 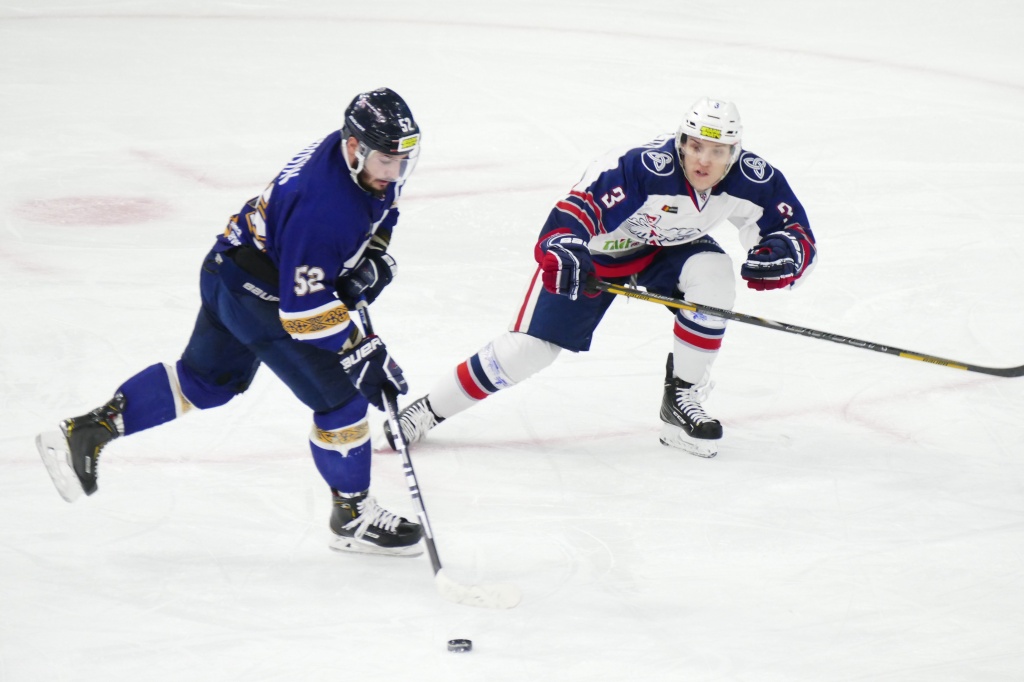 In the final game of the day Altay Ust-Kamenogorsk faced Reaktor Nizhnekamsk in Kazakhstan. First goal came 13 minutes in – Vladislav Nurek had a piece of Daniel Butsayev’s shot but the puck still trickled into the net. Home team got back even before the intermission. Nikita Volosenkov capitalized on a power play attempt. Altay’s top-line continued to deliver in the second frame as well. Stas Petrosyan, who had picked up an assist on Volosenkov’s tally, found the back of the net himself. Volosenkov went on to score his second of the game.

Eight minutes into the third period Petrosyan won a face-off in the offensive zone. The puck slid right to the tape of German Shaporev who fired a cannonball home to improve Ust-Kamenogorsk’s lead to three goals. Nizhnekamsk did score their second goal of the game but it came too late in regulation – Aidar Valeyev converted on a power play. Altay win 4-2 on home ice.