SKA-Varyagi
News
Yaroslav Likhachyov – Most Valuable Player, Khasanov – Best Coach. 2021/2022 MHL award-winners
Maxim Krovyakov – 2021/2022 Playoffs Most Valuable Player
SKA-1946 win first championship in their history! Michkov scores game winning lacrosse-style goal
Krasnaya Armiya vs SKA-1946 in the finals! JHL deciding games schedule
“I’ll try to make it to the senior team.” Yaroslav Likhachyov finished his JHL career with a team’s record
The talent of the CSKA system rocks in the JHL playoffs. Agatha Christie helps Prokhor Poltapov prepare for games
“It’s a shame that three years in the JHL flew by so fast” – Matvei Kokovin lost a bet to Alexei Shevchenko as the White Bears failed to qualify to the playoffs
“I gave myself a choice: either to get stronger and move on, or to quit hockey” – SKA-1946’s leader talks about his season, social media, and hockey life
Share 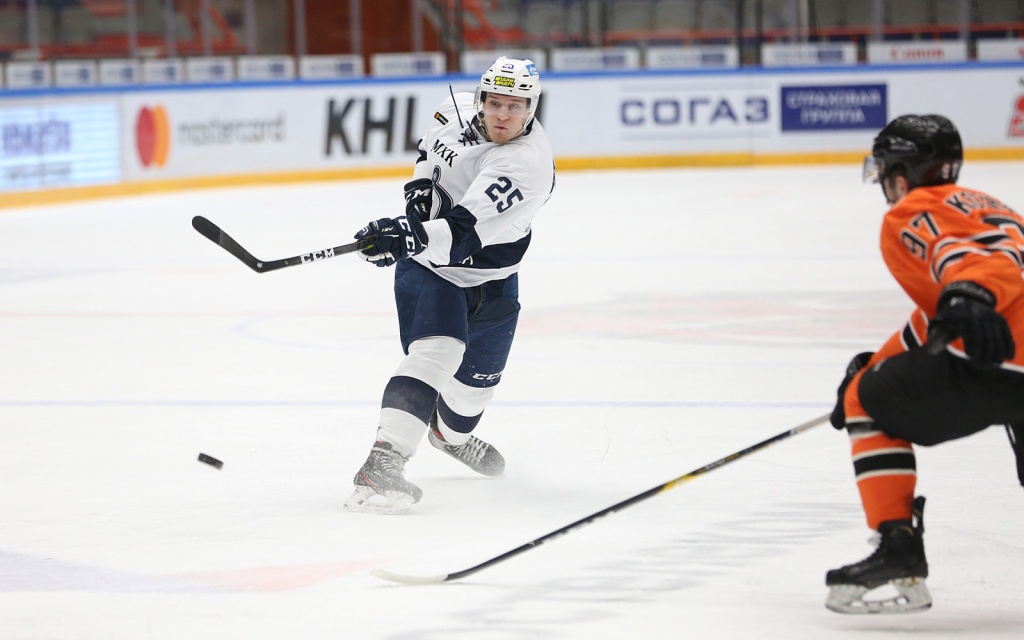 Amurskie Tigry Khabarovsk lost another one on home ice. JHC Dynamo St. Petersburg enjoyed their second consecutive win over the ‘Tigers’. Home team scored the first goal of the game as Alexander Gopiyenko found the back of the net. Video review confirmed that it was a good goal. However, that turned out to be the only goal home team would score in this one. Dynamo gradually gained the momentum and converted it into goals in the second period of action.

It all began with a string of penalties and Yuri Ushakov’s tally in 4-on-3 format. The visitors scored two more goals just nine seconds apart. First Dmitry Rashevsky bubbled the net and right after him it was Sergei Bolshakov who got it over the goal-line. Dynamo focused on defense in the third period and Amurskie Tigry struggled offensively as they were getting way too many penalties. As a result, St. Petersburg win 3-1 on the road.


Sptunik lose on the road to Altay 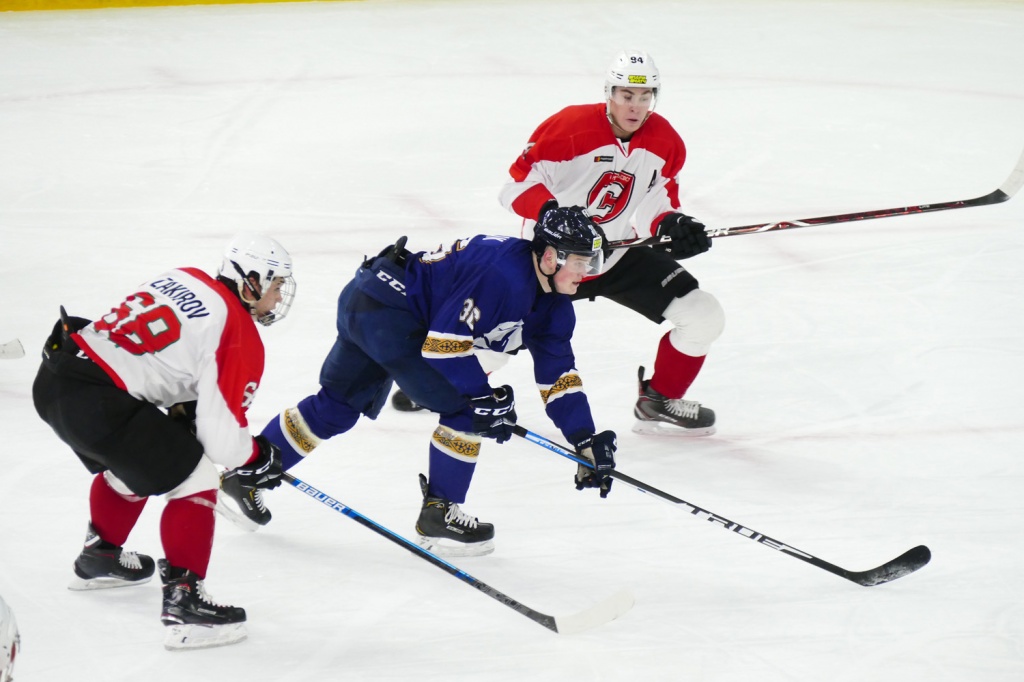 The game in Ust-Kamenogorsk, Kazakhstan ended with the same final score as Sputnik Almetyevsk faced Altay on the road. Neither team could break the deadlock for a good little while. Only past the halfway mark of the second period of play did Ivan Komarovsky finished off a great passing play with a tap-in from the doorstep. Almetyevsk responded with a tally by Daniil Melnikov but in the very next shift home team’s top line got the job done again – German Shaporev got the marker.

Less than 30 seconds into the third frame Shaporev scored his second goal of the game off a 2-on-1 rush. Ust-Kamenogorsk survived the final push by Almetyevsk. With this win, Altay are now just a point away from the playoff zone. 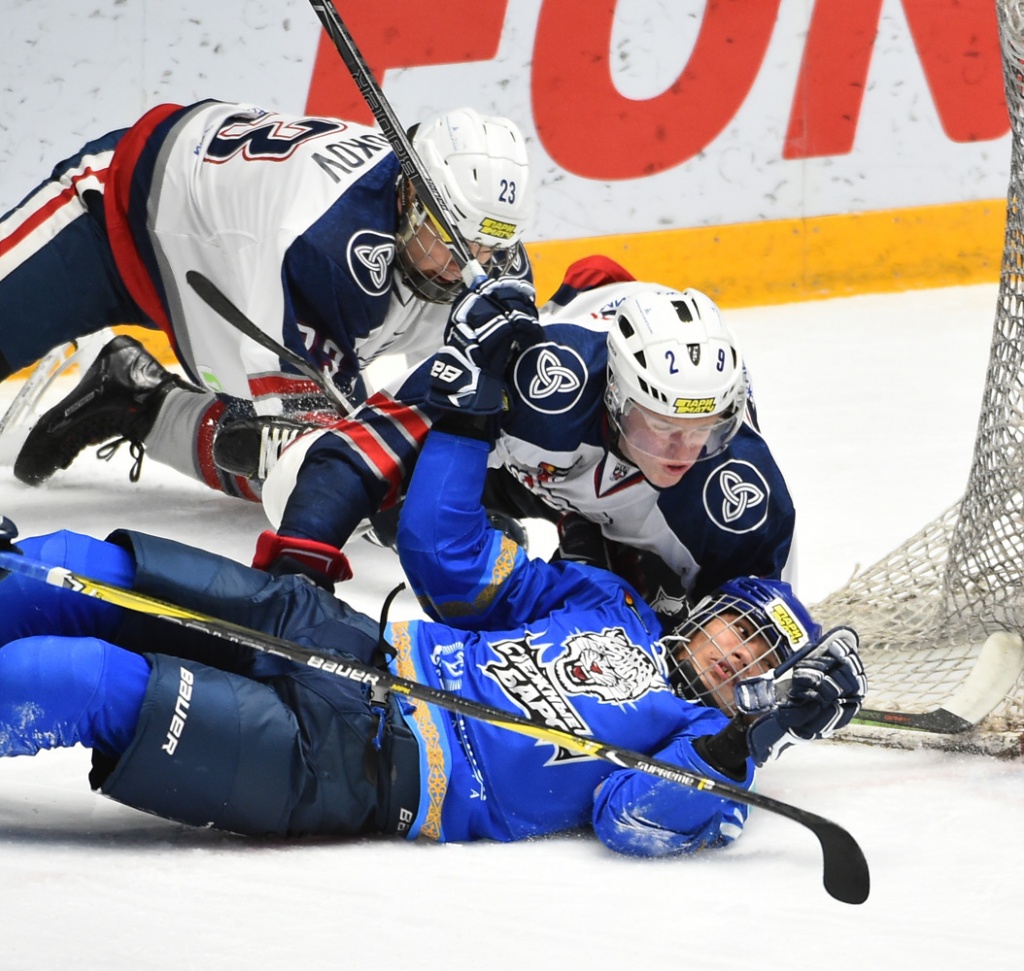 A much more high-scoring game took place in Nur-Sultan, Kazakhstan as Reaktor Nizhnekamsk entertained Snezhnye Barsy. First period of action ended with 2-1 on the scoreboard. Vladislav Saiko and Artur Gatiyatov scored for the home side, while Bulat Shambazov capitalized on a power play to get a goal back for Nizhnekamsk. Snezhnye Barsy began pulling away in the second period – Dias Guseinov, Danil Butenko and Stanislav Alexandrov made it a 5-1 hockey game, forcing the visitors to swap Yaroslav Ozolin for Artyom Yevpak in goal.

Oleg Boiko scored on the latter just a few shifts later, while Maxim Polkin got a goal back for Nizhnekamsk. 12 minutes into the third stanza Aidar Kharisov scored another one for the visitors. That concluded the scoring for Reaktor and Snezhnye Barsy had the last word in this one – Gatiyatov completed his hat-trick and Nur-Sultan won 8-3 on home ice. 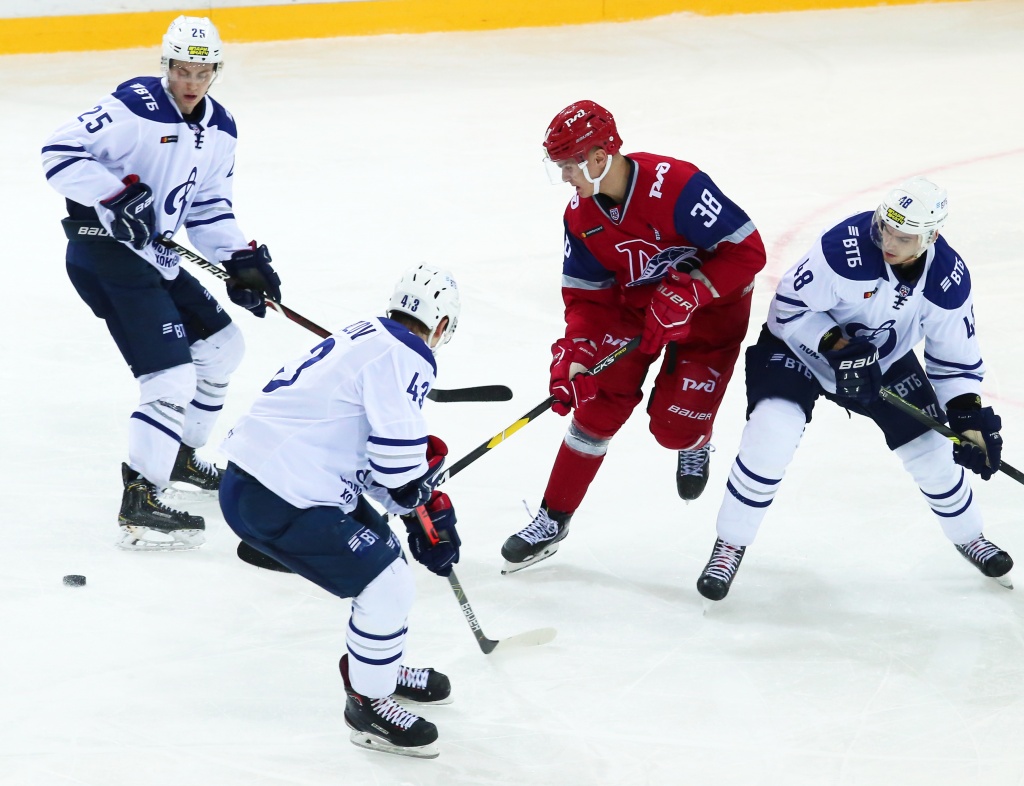 Loko played hosts to JHC Dynamo Moscow in Yaroslavl. The team opted for fast-paced hokey and first goal of the game came 14 minutes in – Roman Bychkov took a shot from the blue line and the puck ricocheted into the back of the net off a defenseman. The visitors had a great chance to bring it back to even in the second period but they failed to convert on a 2-on-1 rush. If you don’t score, you get scored on – Ilya Nikolayev wristed a beauty from a face-off circle to make it a 2-0 hockey game after 40 minutes of play.

‘Railway men’ once again scored a goal and didn’t allow one in the third stanza. Yaroslavl top-scorer Yegor Manin put it into the empty net to seal the deal. Yegor Gorshkov stopped all 21 shots he had to face in this one en route to a shutout win on home ice. 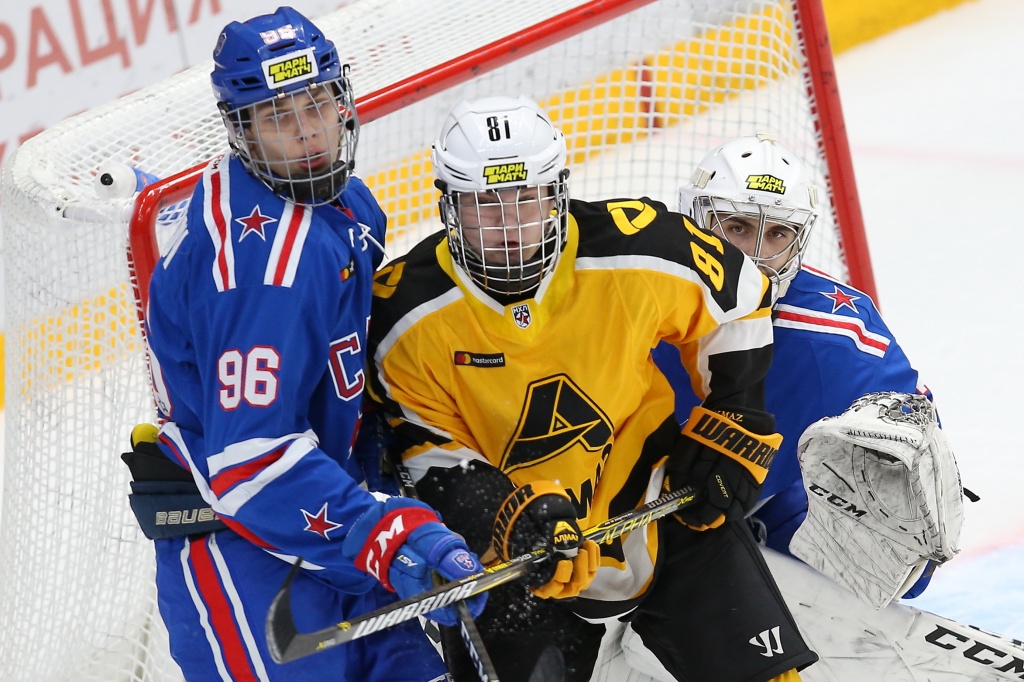 SKA-1946 St. Petersburg enjoyed a great first period of action against Almaz Cherepovets as they scored as many as three unanswered goals. 14 minutes into the game Ivan Ivanov opened up the scoring. Just over a minute later Artyom Zhuk doubled the lead with a shot off the right wing. And just 13 seconds later Marat Khusnutdinov zigzagged to the slot and made it 3-0. After that Cherepovets swapped Konstantin Shostak for Denis Rybalkin in net.

The goaltender swap didn’t stop St. Petersburg from scoring three more goals in the second period. This time Yegor Shekhovtsev, Arseny Brinkman and Alexander Gordin found their target. Only after going down by six did Vladislav Fyodorov finally get a goal for Almaz, putting it past Dmitry Nikolayev. Alexei Tsyplakov set the final score late in regulation as he buried his own rebound. ‘Army men’ enjoy a blowout 7-1 win on home ice. 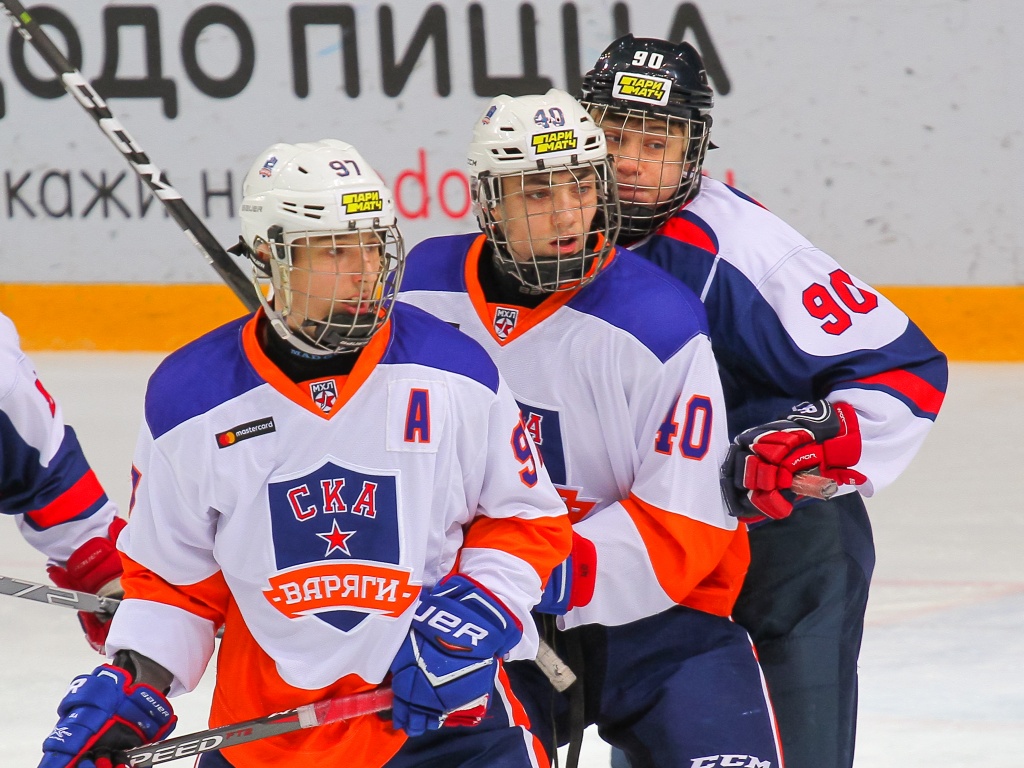 Krylia Sovetov Moscow played hosts to SKA-Varyagi in Setun. Leningrad Region team scored a quick goal in this one. Just three minutes into the game Evgeny Sapelnikov solved Denis Popov. Matvey Gorbushin scored another one for SKA-Varyagi early in the second period of play, forcing ‘Soviet Wings’ to swap their netminders. With Danil Kadochnikov in goal, Moscow managed to bring it back to even before the intermission – Yegor Zudilov and Damir Bilyalov found the back of the net.

However, the visitors went on to win it, despite being heavily outshot by Krylia Sovetov in the third stanza. Five minutes into the period Nikita Dashkovsky put SKA-Varyagi back in the lead and late in regulation Grigory Kuzmin scored on the empty net. St. Petersburg win 4-2 in Setun. 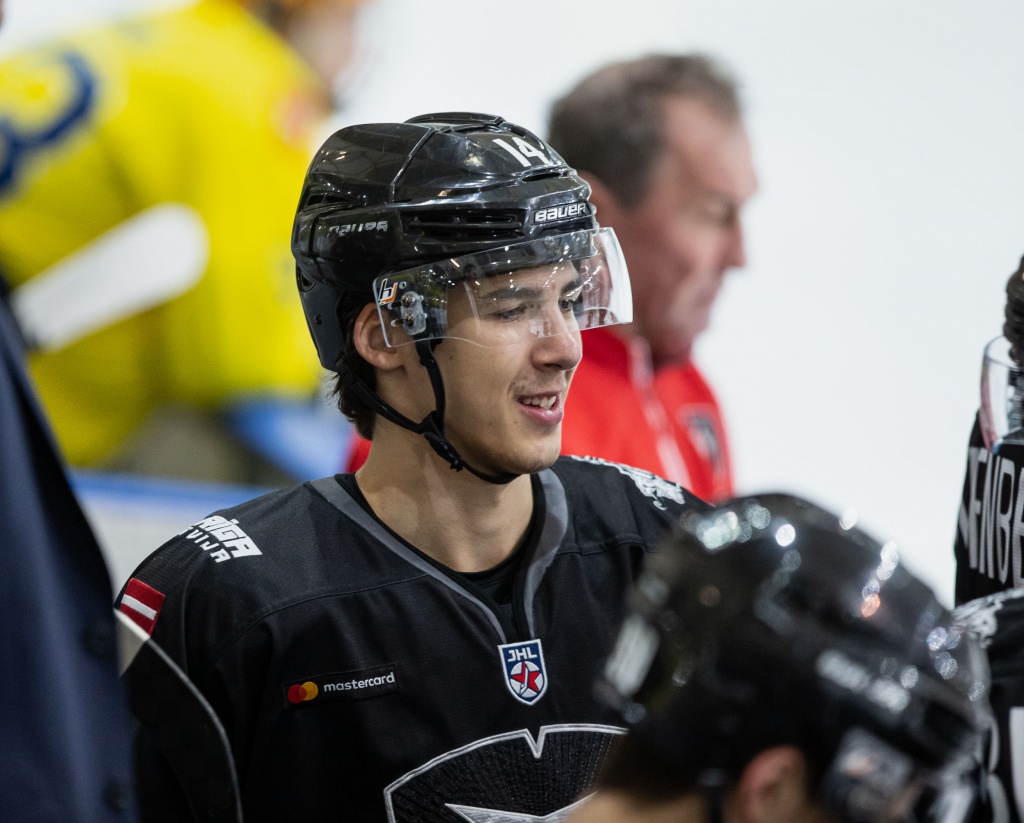 In the final game of the day JHC Atlant Moscow Region faced HK Riga at Inbox Arena in Pinki, Latvia. Moscow Region couldn’t cope with Riga. Mikus Mintautiskis opened up the scoring five minutes in. Home team had two power play attempts but managed to improve their lead only four minutes into the second period of action. This time it was Richards Ligis who put it past Maxim Kloberdants.

Bruno Bruveris had a lot on his plate in the second and third stanzas but he proved to be the first star of the game as he stopped a total of 39 shots en route to a shutout win. Moscow Region got blanked and in the last minute of regulation Roberts Prizevoits set the final score. HK Riga win 3-0 on home ice.