Seven regular season games took place in Parimatch Junior Hockey League on November 14th, six of which were Eastern Conference matchups. The only Western Conference battle was held in Khabarovsk where Amurskie Tigry faced JHC Dynamo St. Petersburg. We take a look at Thursday action in this review. 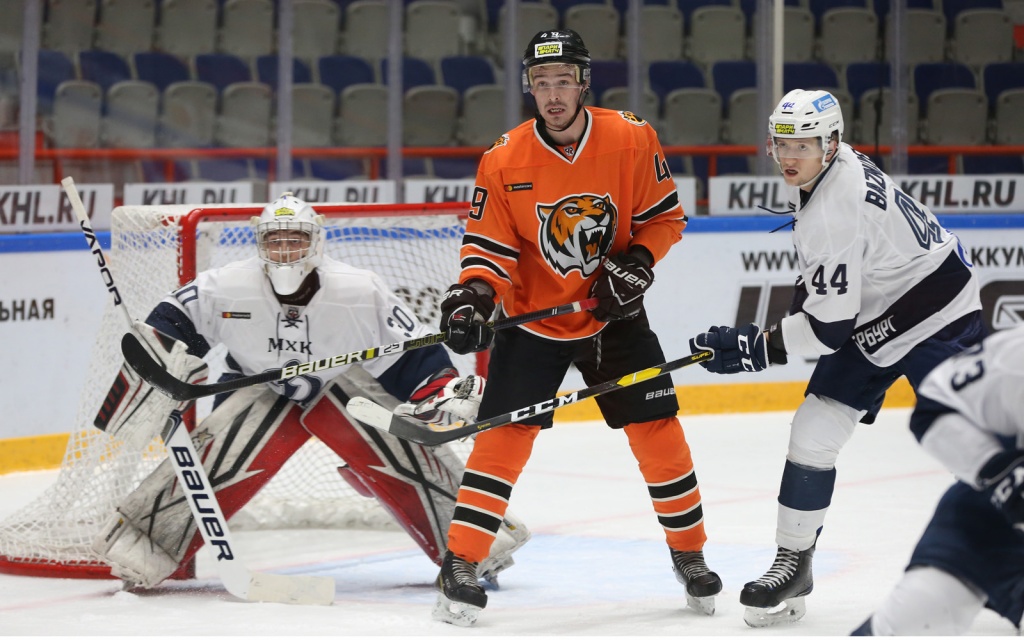 The gameday began in Khabarovsk where Amurskie Tigry faced JHC Dynamo St. Petersburg. Both teams came into the game far for optimal form. Khabarovsk recently ended their 11-game losing streak but weren’t quite out of the slump yet, while Dynamo won just two games out of the past eight.
The game kicked off with a quick goal by the visitors. Yuri Ushakov put the puck on net off the boards and the puck banked into the net off Alexander Yevgrafov’s mask. Officials reviewed the play but didn’t overrule their on-ice call. Ushakov opened up the scoring and got his 1st career Junior Hockey League goal.

A few minutes later Maxim Karpov doubled the lead for St. Petersburg. Ushakov passed it from behind the net and Karpov scored from point-blank range. It seemed that Yevgrafov made a reactionary save but the puck squeaked between his wickets and into the back of the net.

Troublesome start didn’t face Amurskie Tigry. Home side managed to get back even before the intermission. The ‘Tigers’ sliced St. Petersburg’s lead in half late in the period. Nikita Linnik stole the puck from Dynamo’s defenseman on the breakout and delivered it to Ilya Kozhukhov, who snapped it just under the bar. With 20 seconds on the clock the very same Kozhukhov capitalized on a power play. Linnik took a shot as the puck bounced of the wall, Kozhukhov corralled the rebound and put it past Ivan Sapozhnikov, who was way out of position. Sapozhnikov was replaced by Makar Chufarov in the intermission.

Second period of action didn’t feature many scoring chances but it was the home side who had the momentum on their side. With eight minutes remaining to play in the frame Nikita Linnik forced Chufarov skate out of the paint, passed it to the slot and Kozhukhov scored another one. Officials had to take another look at the play and it lasted a while. In the end, the goal was waved off. It turned out that Amurskie Tigry had to many men on the ice on the play.

Yegor Bashkatov’s men did regain the momentum and got in the lead. With five minutes remaining to play in regulation Semyon Zakharov found the back of the net. Last moments of the game were intense. Amurskie Tigry pulled their netminder for the extra-attacker and called timeout but failed to get the equalizer. 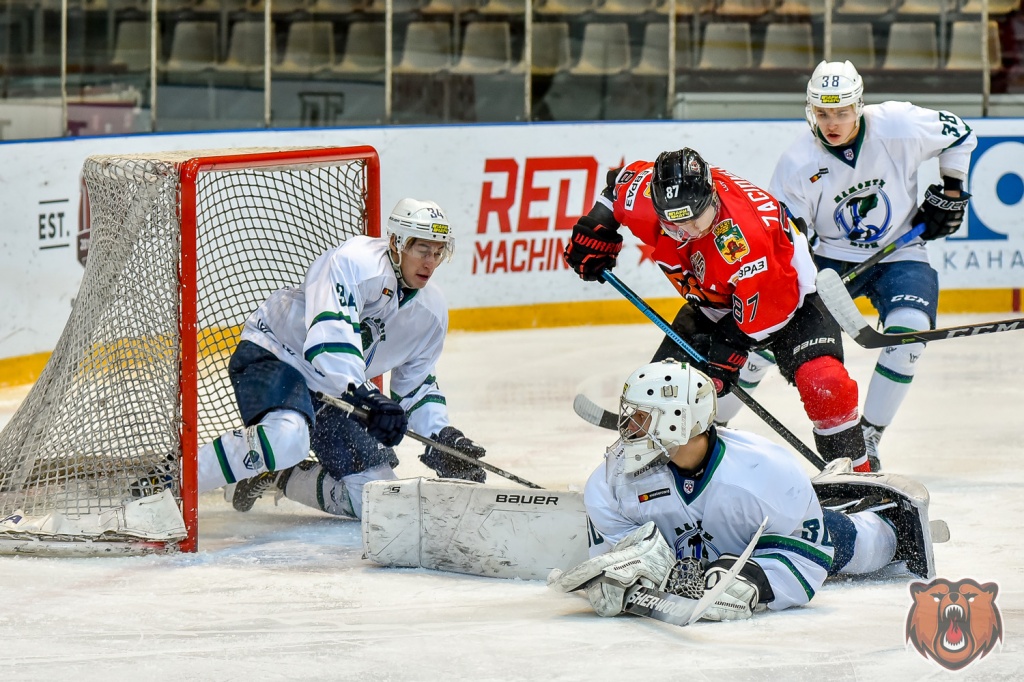 Both teams are positioned mid-table in the Eastern Conference. However, the game was close only in the first period. ‘Mammoths’ and ‘Bears’ exchanged goals by the 10th minute. Vadim Zakhmarevch responded to Ivan Pavlyuk’s marker. It didn’t stay a 1-1 game for long. Just a minute later Maxim Kirileychenko put Khanty-Mansiysk back in the lead with a shorthanded tally. Last minute of the period featured an interesting episode. Arseny Khudobin had a great scoring chance but hit the crossbar. The play went on and on the following rush Ivan Savchik skated to the net, taking a low shot from the slot. Game officials had to review the play and look back at the shot that ringed off the crossbar. Unfortunately for Kuznetskie Medvedi, the puck never crossed the line and Savchik’s goal counted.

The visitors were the only team scoring in the following 40 minutes. Vasily Atanasov, Nikita Chusovitin, Ivan Ezhov and Ivan Vorobyov got the markers. Kuznetskie Medvedi coaching staff decided not to opt for goaltender switch and Kiriil Kuznetsov allowed all seven goals. Novokuznetsk extend their losing streak to six games, while Mamonty Yugry catch up to Ladiya Togliatti in the standings. 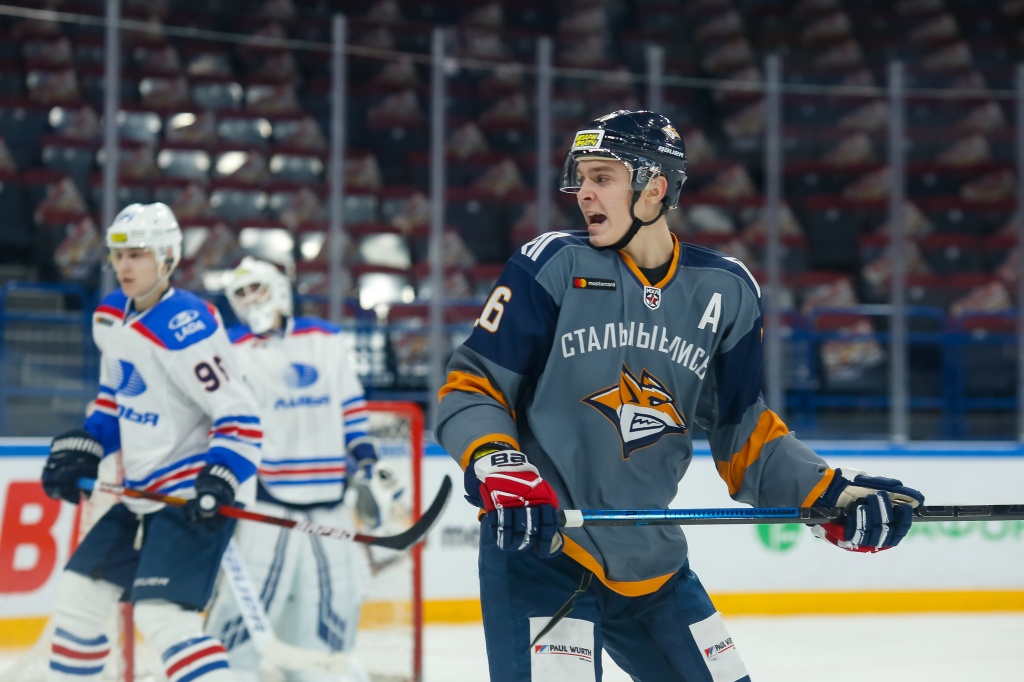 The teams picked up right where they left off the day before. Just as in the first game of the back-to-back series Stalnye Lisy Magnitogorsk created a lot of scoring chances but couldn’t find the back of the net for a while. As for the visitors, they got on the board first once again. Seven minutes into the game Stanislav Rangayev capitalized on a power play. Just as the day before, Volga team lost their lead shortly before the intermission – with 33 seconds on the clock Andrei Mozyakin sent it upstairs on Zabrodin on a power play from the slot to tie it up.

Home team managed to convert their momentum into several goals in the second period of action. Yuri Panov’s team scored three times, establishing a comfortable lead. Just 13 seconds into the period Yegor Spiridonov put Stalnye Lisy in the lead. He went on to score his second tally of the game late in the frame.

Third stanza featured just Timur Khairullin’s goal, which essentially bagged it for Magnitogorsk, and a fight between Maxim Bolsunovsky and Andrei Kolyagin. With this success Stalnye Lisy are now tied with Reaktor Nizhnekamsk in the standings. Both teams are among Top-3 in the East. As for Ladiya Togliatti, they let Mamonty Yugry get close to them. The latter have a great chance now to surpass them. 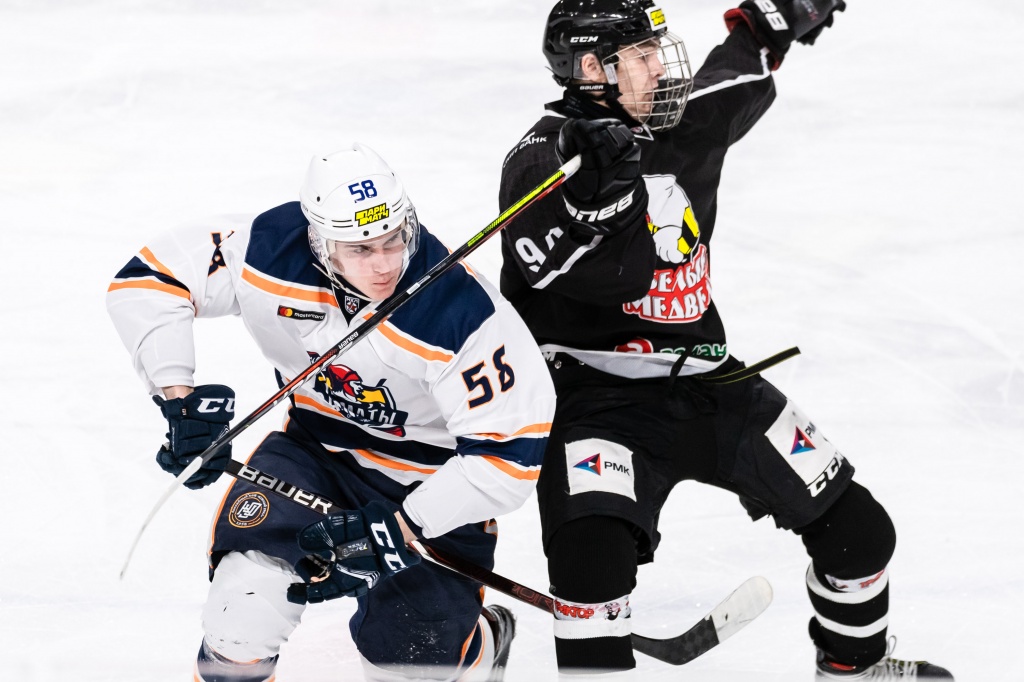 Belye Medvedi Chelyabinsk played hosts to Sarmaty Orenburg. The visitors outshot Chelyabinsk in the opening period of play but allowed a goal first. Valery Sapozhnikov sniped one home right from a face-off dot. Orenburg weren’t fazed by it and they continued creating scoring chances. They found success five minutes into the second frame – Ilya Zhitnikov wristed it past Ilya Gorbunov.

The teams traded goals before the second intermission but it reverse order. Ilya Ignatov scored for Sarmaty, while Kirill Kadyshev netted one for Belye Medvedi. Key events of the game happened in the last eight minutes of regulation. Alexander Yakovlev gave ‘Polar Bears’ their second lead of the game as he converted on a power play, while Sapozhnikov scored his second to improve it. German Kvon made it a 1-goal game with two minutes on the clock but that was all Sarmaty could get. Belye Medvedi win 4-3 on home ice. 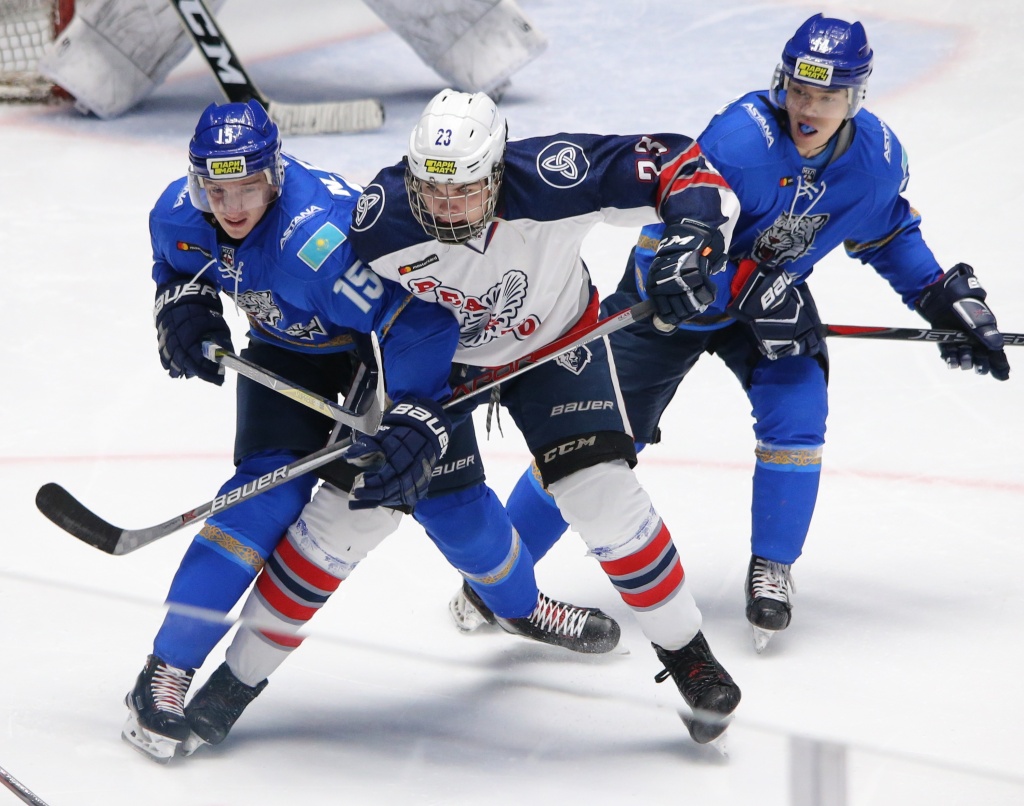 Snezhnye Barsy Nur-Sultan faced Reaktor Nizhnekamsk on home ice. Nur-Sultan had two power play opportunities in the opening period and took almost three times as many shots as the opposition, yet failing to get on the board. Nizhnekamsk showed patience, even the game up in the second stanza and managed to score shortly before the intermission. Madi Dikhanbeck’s minor proved to be fatal for Snezhnye Barsy as Ilya Paranin converted 30 seconds into it. 1-0 after 40 minutes of play.

Rail Mustafin scored the game-winning goal for Nizhnekamsk with five minutes remaining to play in regulation. Yaroslav Ozolin couldn’t carry the donut to the finish line as Dias Guseinov, who lead Snezhnye Barsy in scoring, solved him at 57th minute. However, Nur-Sultan couldn’t send the game to overtime and lost 2-1 on home ice. 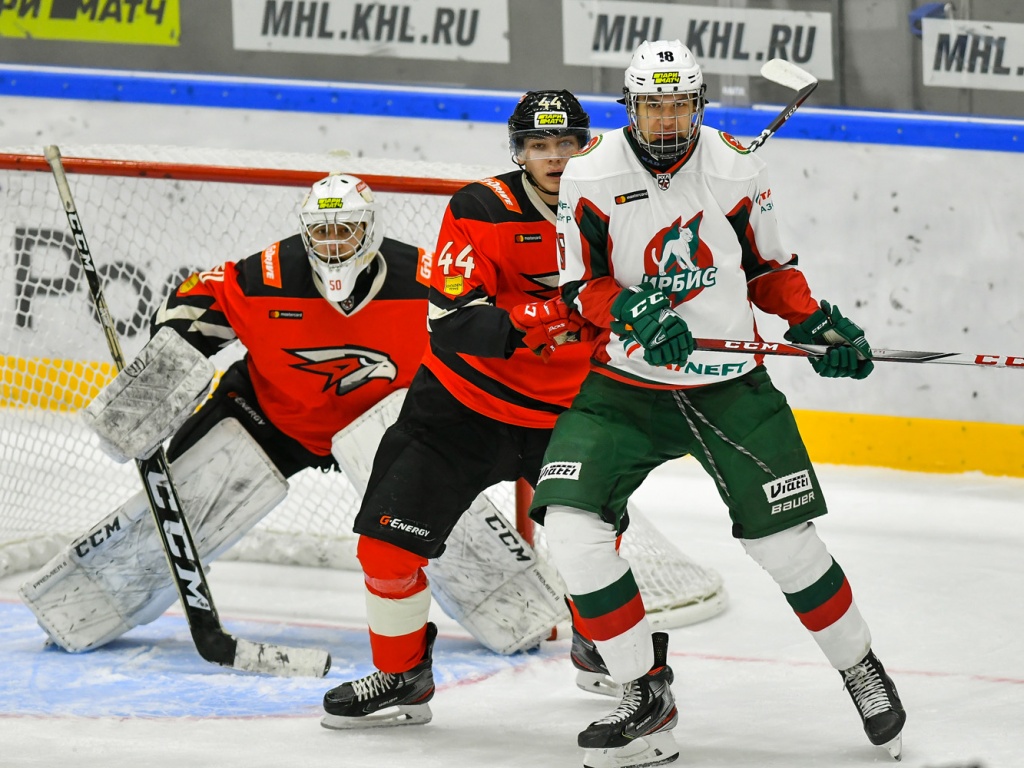 Irbis Kazan went on the road to face Omskie Yastreby at their brand new arena. The teams were feeling each other out in the first period of action and broke the deadlock only early in the second – Kirill Krutov put Kazan in the lead. The visitors had a chance to improve their lead in the period on several occasions as the ‘Hawks’ kept piling up penalties. However, second goal of the game came only a few minutes into the third period – Emil Galiaskarov put another one past Nikita Dianov.

All Omskie Yastreby could get in this one was pulling back to within one. With five minutes on the clock Daniil Berestnev found his target. Game officials had to review the play but it counted in the end. Arseny Gritsyuk shot his team in the foot getting a late minor penalty. Even though, Krutov was sent to the box as well shortly after that, the game didn’t go to overtime. Irbis Kazan win 2-1 on the road, ending Omskie Yastreby’s 10-game winning streak 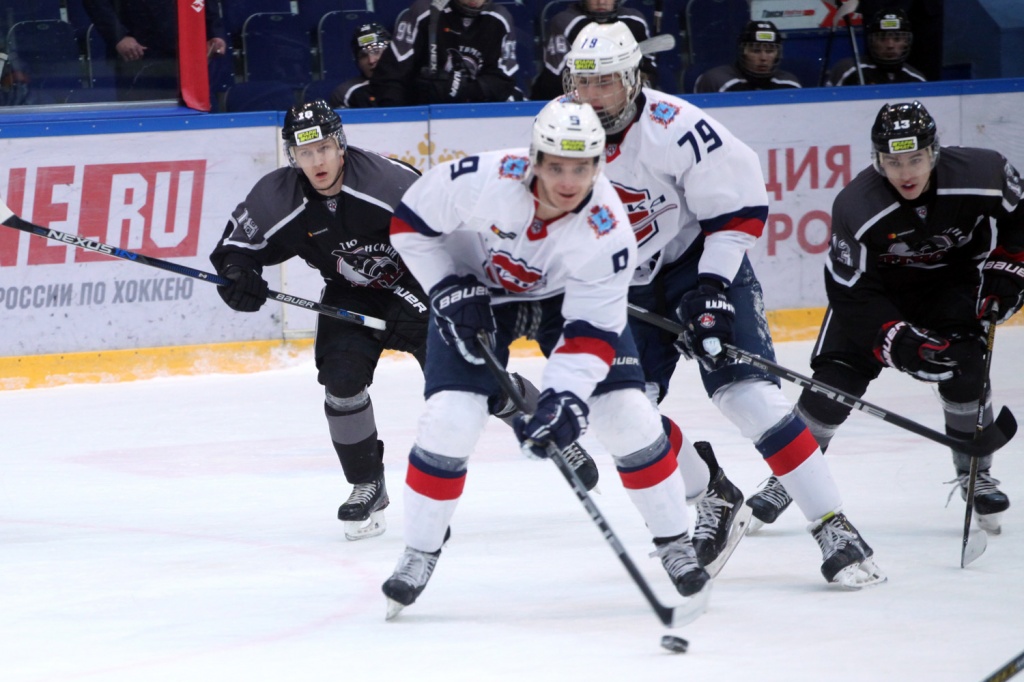 In the last game of the day Chayka Nizhny Novgorod went to Tyumen and enjoyed a great first period of play in a close game. Danila Platonov scored twice and Maxim Rastvorov added a tally of his own to give Nizhny Novgorod a very comfortable 3-goal lead after 20 minutes of play. Artyom Vasyukov got a tally back for Tyumensky Legion but just five minutes later the 3-goal margin was restored by Maxim Tsybin. Anton Tsibin – no relation to Maxim – capitalized on a power play attempt before the period expired and the teams headed to the dressing-rooms with Nizhny Novgorod leading 4-2.

Tyumen didn’t manage to come back into the game. Chayka made it a 5-2 game with a tally by Denis Morozov. Maxim Bogdanov then converted a 2-man advantage to set the final score. Nizhny Novgorod win 5-3 on the road.