ORG Junior
News
“I am of the same “slow ship” style as my father.” Maxim Mayorov – about moving to Yaroslavl, national team debut and passion for tennis
“I bought a cake and gave flowers to my mom with my first paycheck.” Yaroslav Tsulygin – about his JHL debut with Tolpar
Was signed up for hockey at the age of three, was dressed as a goalie in an extreme situation and looks up to Datsyuk: take a closer look at the leader of Irbis and the hope of Ak Bars
Edgar Varagyan: “When we were on the plane, guys told me: “He is an enforcer, he would beat you up with no sweat.” I thought: things happen, he would beat me up and so what?”
“As time goes by, taking a flight to Sakhalin feels almost like being stuck in Moscow traffic.” Daniil Veremeichik – the JHL's Best Player on Social Media
“Working out in a gym is a type of rest for me.” Ivan Murashov had the best season of his career, dreams of playing in the KHL and has not eaten any fast food for two years
“Condensed milk is the only unhealthy food available for the national team.” Raul Yakupov – about the Black Sea Cup, the KHL debut and the season with Reaktor
“Four years in the JHL was a great time. Winning the Cup with Dynamo was the best moment.” Ivan Didkovsky about junior phase of his career
Share 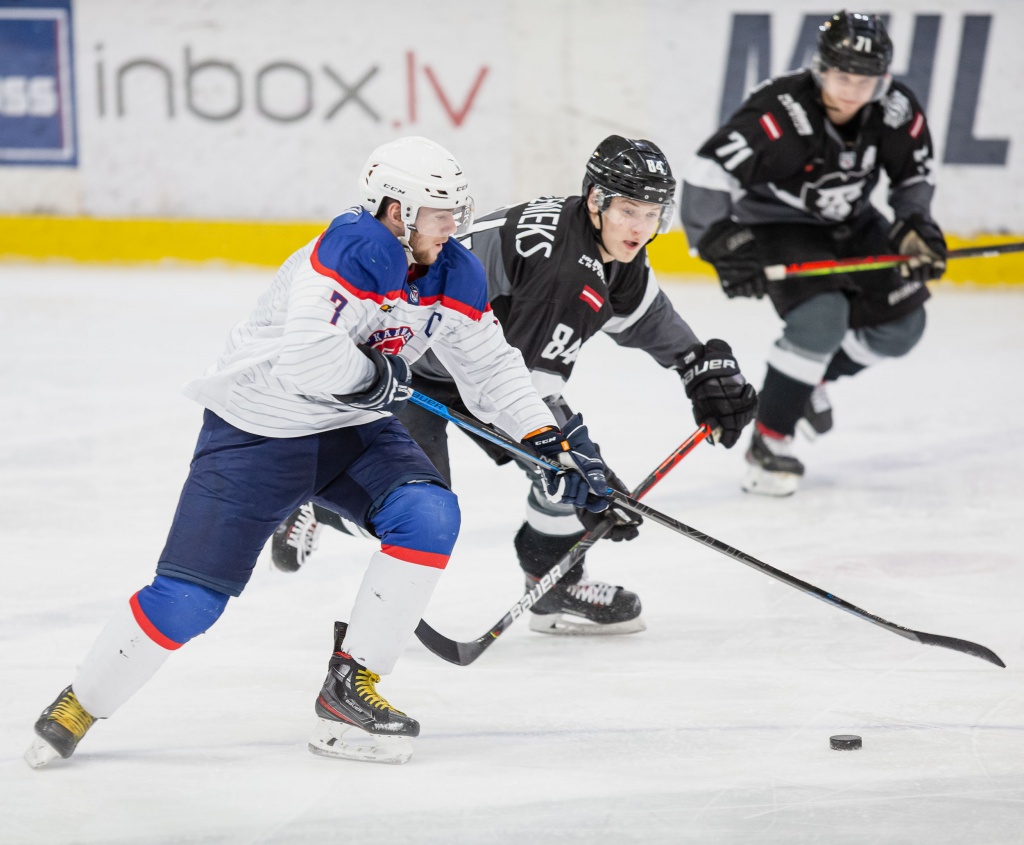 In the final game of the day HC Kapitan Stupino challenged HK Riga in Latvia. The teams exchanged goals in the opening period of play – Amir Garayev put Stupino on the board with a shorthanded marker. Riga responded with a tally by Karlis Bucenieks, who got it past Leonid Sklyar two minutes before the intermission. Riga got the go-ahead goal in the second frame as Richards Ligis found the back of the net 15 minutes in.

Kapitan got a double-minor in the third period but managed to kill off the four penalty minutes. With two minutes remaining on the clock Riga went down a man. Stupino pulled their goaltender for the extra-attacker and threw everything they had at Janis Voris but Richards Grinbergs hit the yawning cage and set the final score. Riga snap their losing streak with a 4-2 win on home ice. 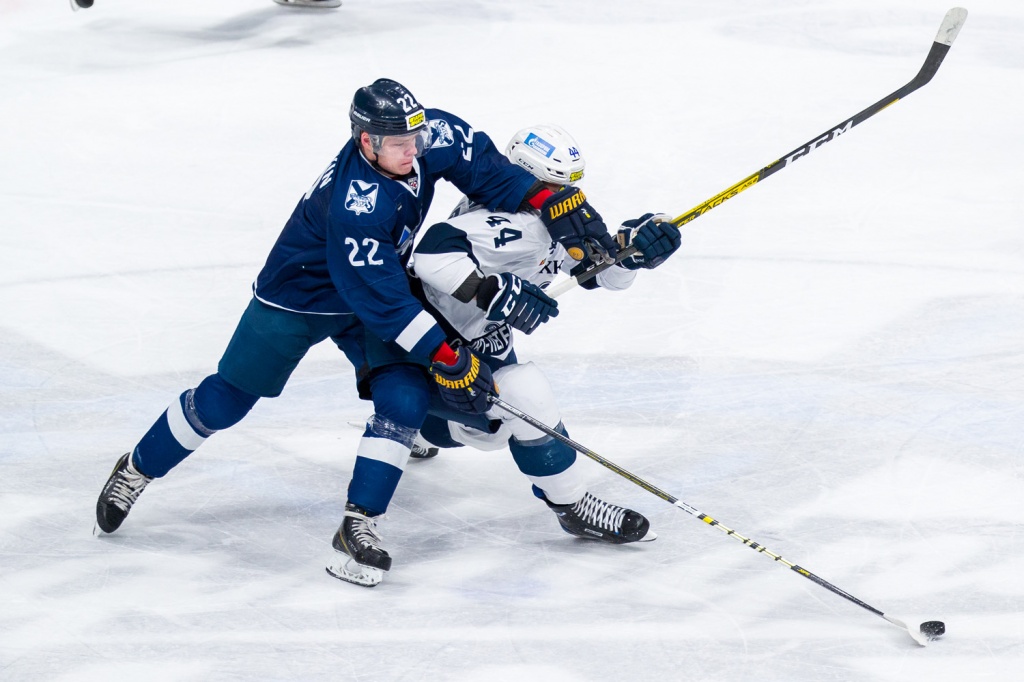 First game of the day was held in Vladivostok where Taifun Primorie Region faced JHC Dynamo St. Petersburg. The visitors came into the game far from optimal conditions. St. Petersburg continued their long road trip around Russia’s Far East after winning just one game out of six. As for Taifun, they came into the game after two consecutive wins over another St. Petersburg team SKA-Varyagi and looked to build on their recent success.

The teams combined for just a few scoring chances and both goaltenders stopped most of the shots with ease. Dynamo turned everything upside down in less than a minute. Midway through the second period of action Nikita Buruyanov broke loose shorthanded, spun and fired it home past Ivan Gamov. 46 seconds later the teams were already playing at full strength and Sergei Alexandrov doubled the lead for the visitors. The fans didn’t get to see another goal in this one. Dynamo worked the clock and got a shutout win in Vladivostok. 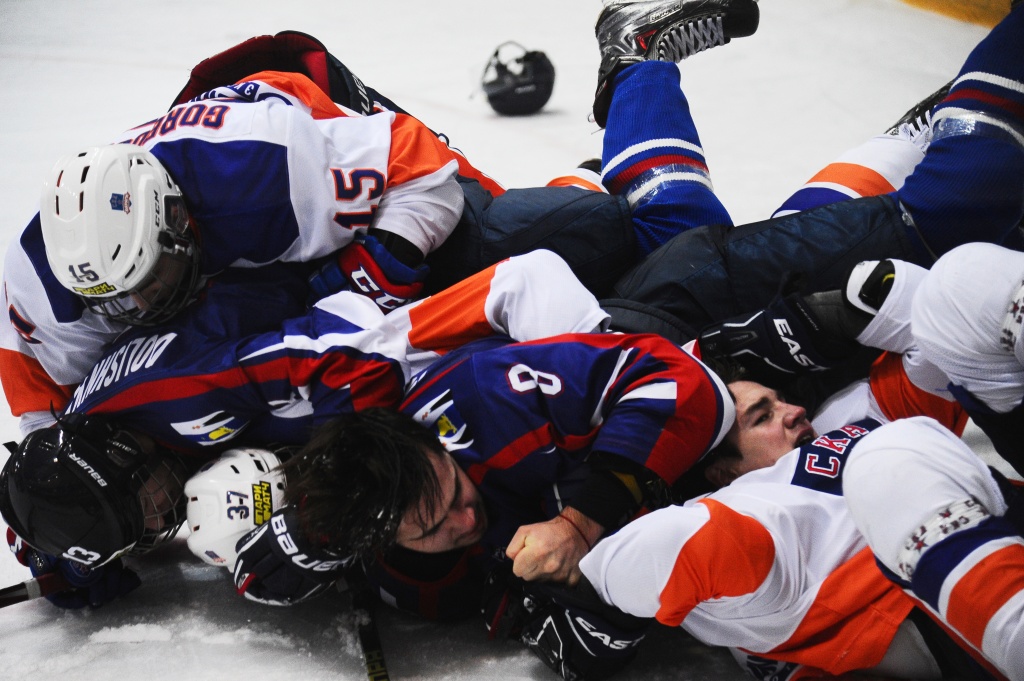 Home team scored a rather quick goal. Yegor Ageyev opened scoring just six minutes in as he sent it past Pavel Davydyuk. Midway through the period Daniil Glukharev made the visitors pay for being undisciplined and capitalized on a power play.

Yuri Dobryshkin’s men got to shine early in the second stanza. Three minutes after the initial face-off Alexander Katayev pulled the visitors back to within one. That got SKA-Varyagi going. They started playing physical and landing huge hits. Following a massive check, a mass brawl broke out and game officials handed out 66 penalty minutes as a result of it. That worked in Yuzhno-Sakhalinsk’s favor as they scored two more past Davydyuk before the second intermission.

There was no scoring in the third period. Sakhalinskie Akuly worked the clock and got a solid win on home ice.

SKA-Varyagi lose their fourth consecutive game and stayed at second last spot in the Western Conference. Sakhalinskie Akuly continue their pursuit of the playoff zone and will edge their neighbors from Vladivostok in the standings should they get another win tomorrow. 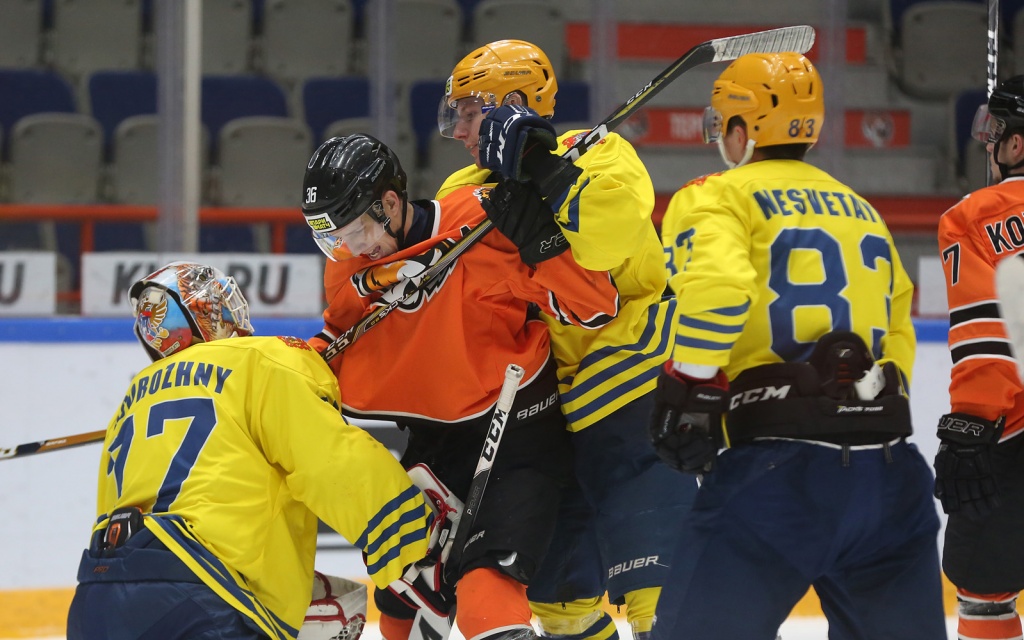 The teams went into the game with long losing streaks on both ends. Atlant Moscow Region won just one game out of their past seven, while Amurskie Tigry Khabarovsk lost as many as 11 in a row. Roster changes were also against the home side. For example, goaltender Artyom Martynov continues to practice with KHL’s Amur and in his absence Alexander Yevgrafov got the nod. The latter played in just his second Junior Hockey League game.

Just 13 seconds into the game Evgeny Babushkin solved Platon Zadorozhny. Altant spent most of the first period in the offensive end but Yevgrafov stopped all 17 shots he had to face over the stretch. Home team grabbed the momentum in the second stanza. The ‘Tigers’ converted their advantage into goals. First their top-scorer Nikita Linnik found the back of the net and when both teams went down a man Ilya Kozhukhov established a comfortable 3-goal lead for the home side.

The visitors did their best to turn things around in the third frame and created one scoring chance after another. Two mass brawls broke out but all Mytischi could get in this one was stealing the shutout from Yevgrafov, who went on to stop 35 shots out of 36.

Amurskie Tigry snap their 11-game losing streak and get really close to Atlant in the standings now. Should Khabarovsk win the second game of the back-to-back series, the teams will trade places. 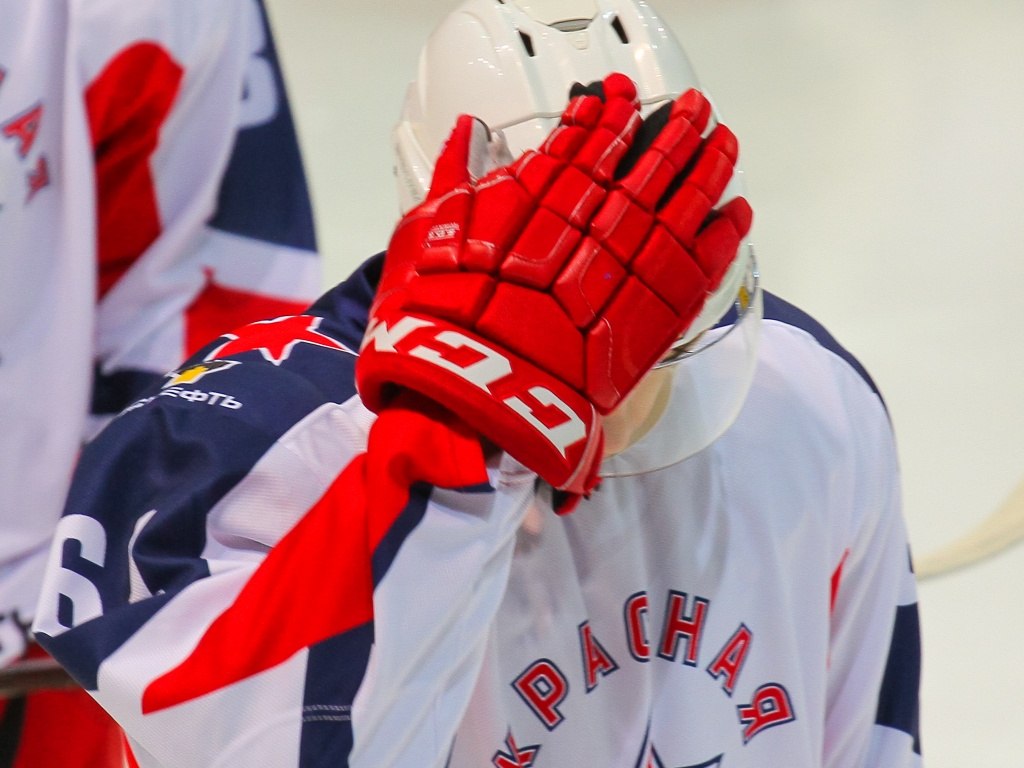 Moscow rivalry game took place in Setun as Krylia Sovetov played hosts to Krasnaya Armiya. Despite being heavily outshot in the opening period of action, Krylia Sovetov capitalized on their scoring chances better. They scored two goals in the final minute of the period in a span of just 20 seconds – Rodion Poroshin and Vitaly Lebyodkin found the back of the net. The red-and-blue got a goal back 17 minutes into the second frame as Alexander Chyorny got the marker.

‘Army men’ slowed down a bit after getting a minor penalty in the third period but just as they killed it off, they began buzzing around Denis Popov’s net and Daniil Anop brought it all back to square one. The game went to overtime but it solved nothing. ‘Soviet Wings’ prevailed in the shootout. Alexei Shumilov scored the winner.

Russkie Vityazi come back from behind, beat ORG Junior 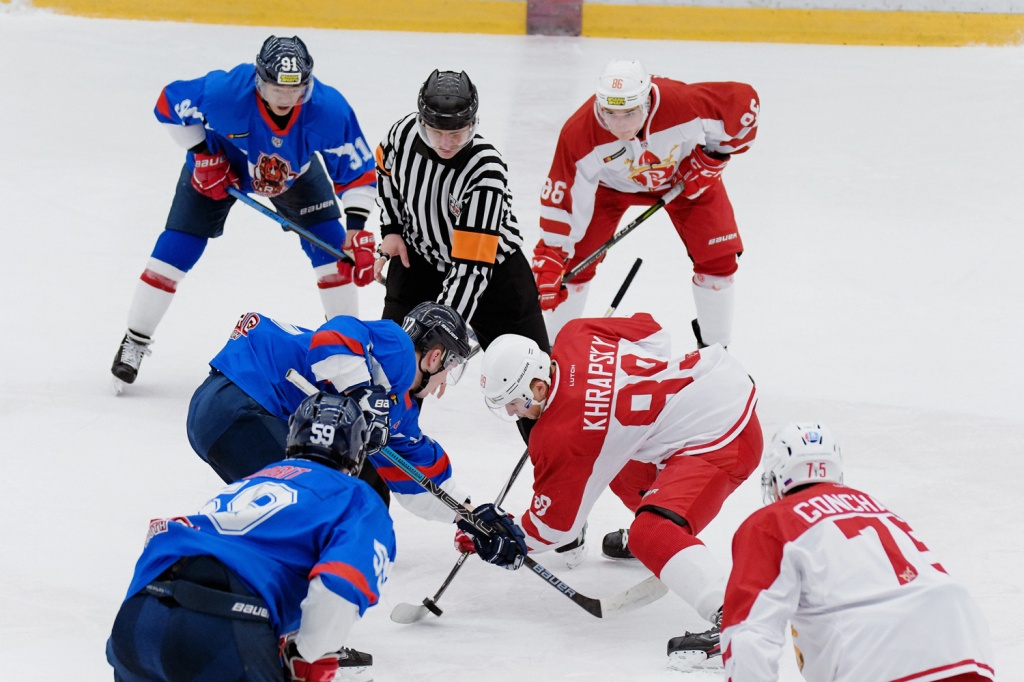 Russkie Vityazi went up against a non-Russian team for the second consecutive time, as Maxim Bets’ men just came back from Riga, Latvia. Despite the fact that Moscow Region team continued their road trip, the game was actually held at their home rink in Chekhov since Beijing’s barn still hosts a women’s hockey tournament, in which Team Russia is one of the participants. This was the third meeting of the season between the two teams. Russkie Vityazi won the two previous bouts by a combined score of 13-0.

Evgeny Yesaulov’s side went through several more roster changes before the game. To Ivashkin’s departure and Yaroshenko’s injury the ‘Rhinos’ had to deal with Artyom Serikov leaving the team as well. Serikov was the top defenseman of Beijing.

First period of play featured almost no scoring chances. Technical visitors spent more time in the offensive end but Ivan Akmurzin made one key save after another. ORG opened up the scoring with four and a half minutes remaining in the frame. Xinyu Li found himself surrounded by three opponents but managed to get a shot away and beat Timur Shiyanov just under the blocker.

Russkie Vityazi coaching staff went for a drastic change in the second period as they swapped Shiyanov for Artyom Shabulin in goal. The visitors establish total control on the game and tied ti up four minutes into the stanza – Nikita Goncharov scored his 50th career Junior Hockey League goal. Midway through the period Chekhov got a minor penalty. Chinese side didn’t score on the ensuing power play but just as Goncharov stepped back onto the ice Beijing regained the lead. Yu Jilong parked in the slot unmarked and one-timed it home off a pass from the area behind the net. However, the ‘Rhinos’ held on to the lead for just a few shifts. Russkie Vityazi won a face-off and Ivan Zinchenko zinged a wrister past Akmurzin. Chekhov favorites got in the lead before the intermission. Zakhar Bardakov stole a puck from a defenseman, streaked down the wing, cut to the slot and dragged it past Akmurzin.


Sputnik beat Stalnye Lisy as Nasyrov gets a shutout 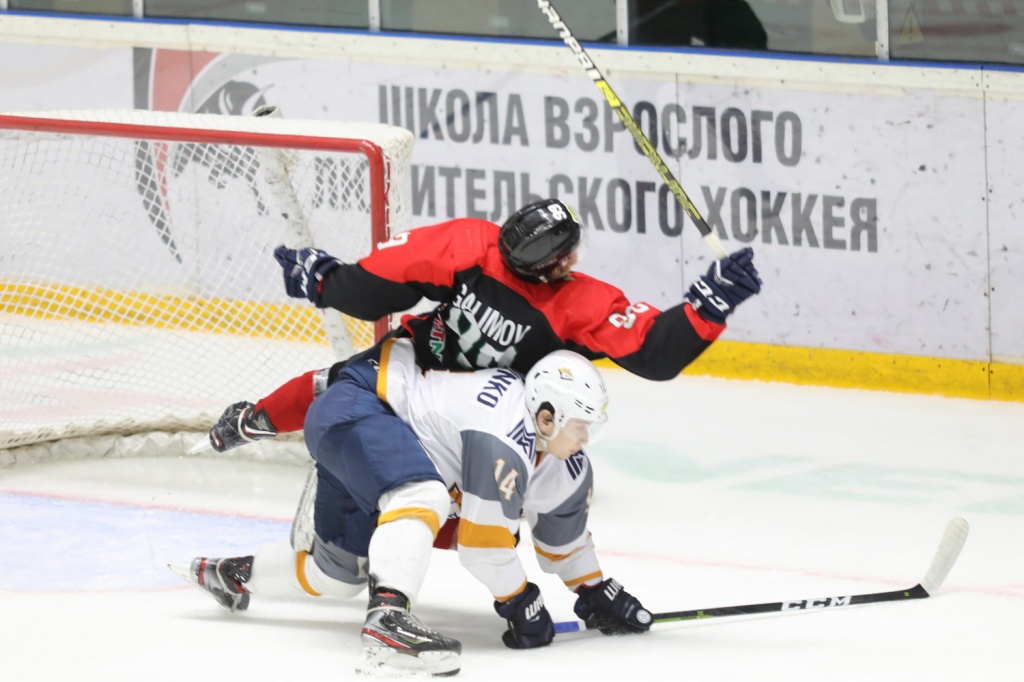 Sputnik Almetyevsk played hosts to Stalnye Lisy Magnitogorsk. Almetyevsk killed off a penalty in the opening period of action and then got on the board – Rail Kabirov found the back of the net. Home team could have scored a shorthanded goal as well but their quick transition play was unsuccessful. They doubled their lead five minutes into the second period at even-strength – this time Mikhail Shestopalov bubbled the net. The teams spent the majority of the period on either a power play or penalty kill due to abundance of penalties.

Almetyevsk further improved their lead in the third stanza. First Artyom Onishko scored a shorty and late in regulation Magnitogorsk goaltender Nikolai Shashkov got a minor, on which Aidar Galimov converted. Rail Nasyrov earns a shutout win with 21 saves. 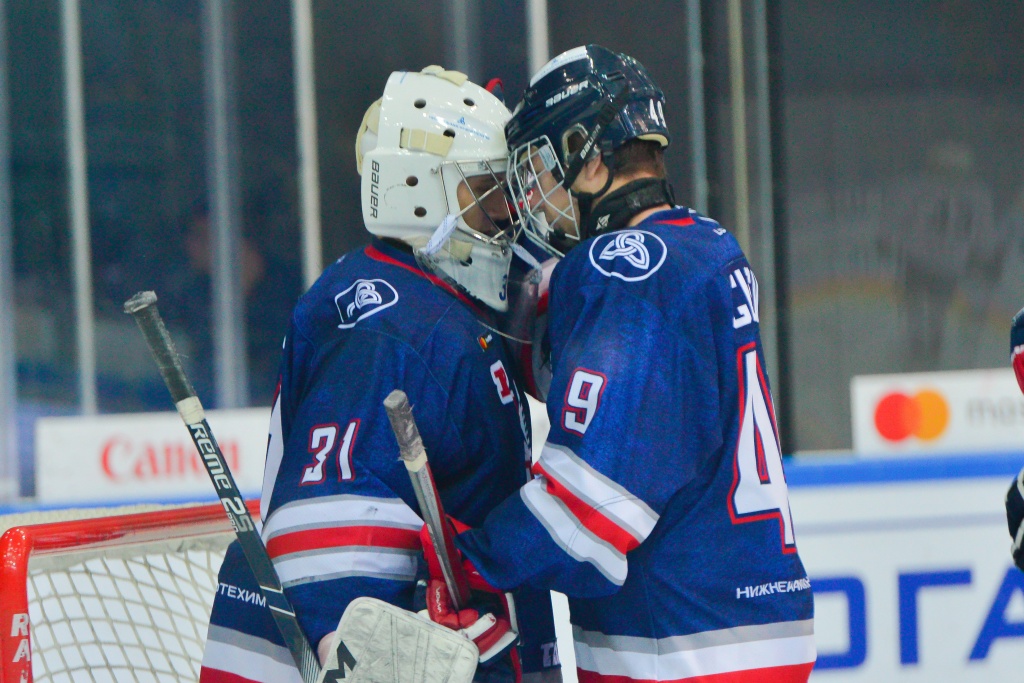 The visitors tied it up in the first ten minutes of the third stanza – Maxim Shabanov scored a pair. However, Nizhnekamsk went on to score the game-winning goal late in regulation – one of Rektor’s top-scorers Bulat Shafigullin bubbled the net on a power play. Home team win 5-4 in a very high-scoring affair.